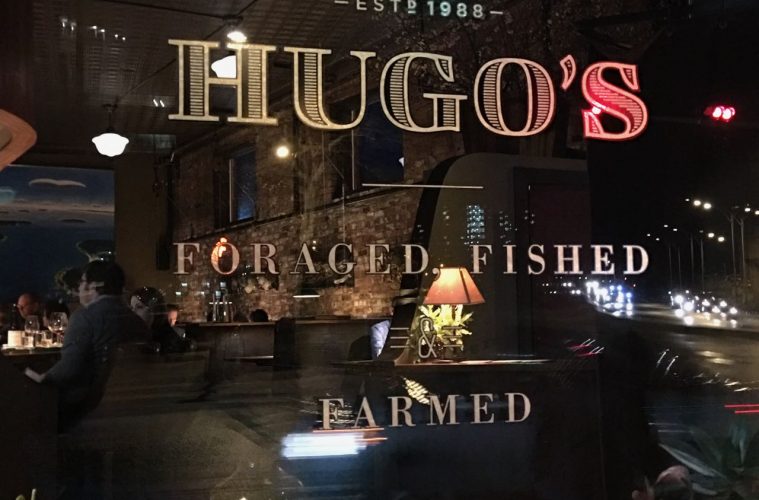 Where to eat in Portland, Maine: Bon Appetit’s 2018 Restaurant City of the Year

If you’re wondering where to eat in Portland, Maine, get crackin’ on making decisions and reservations. With one sentence, internationally renowned French Chef Daniel Boulud elevated this small seaport city’s ridiculously hot culinary scene to the equivalent of a Carolina Reaper, the hottest pepper on the Scolville scale.

“Outside of France, Portland, Maine, has a lot of good chefs,” Boulud told a panel of travel editors at an annual gathering hosted by the trade magazine Travel Weekly.

He even dropped a few names: “I remember maybe 12, 14 years ago, I went to a restaurant called Hugo’s, and the chef, Robert Evans, was very creative and very avant-garde. It was a small restaurant, very unpretentious. My fish supplier is from Portland, and the supply there is amazing, from sea urchins to scallops to fish. Damian Sansonetti and his wife, Ilma Lopez, a pastry chef, met in my restaurant and got married, had a kid, moved to Portland and opened a restaurant, Chaval.”

Location drives Portland’s food scene: Farm-to-table fare was a way of life here before it became trendy. The city edges the seafood-rich Atlantic. Small family farms raising livestock and crops as well as oyster-rich estuaries and rivers are only 15- to 45-minutes away. Plus, startup costs tend to be far less than in other cities, such as Boston or New York, which attracts independent-minded chefs.

To answer the opening question, if you’re wondering where to eat in Portland, Maine, here are some of the city’s top tables as well as a few of my favorites. Let’s start with the ones Boulud mentions.

Chef Rob Evans won the 2009 James Beard Best Chef Northeast award for Hugo’s, which he no longer owns. Now he earns kudos for his casual joint, Duckfat, which always has a line (no reservations). 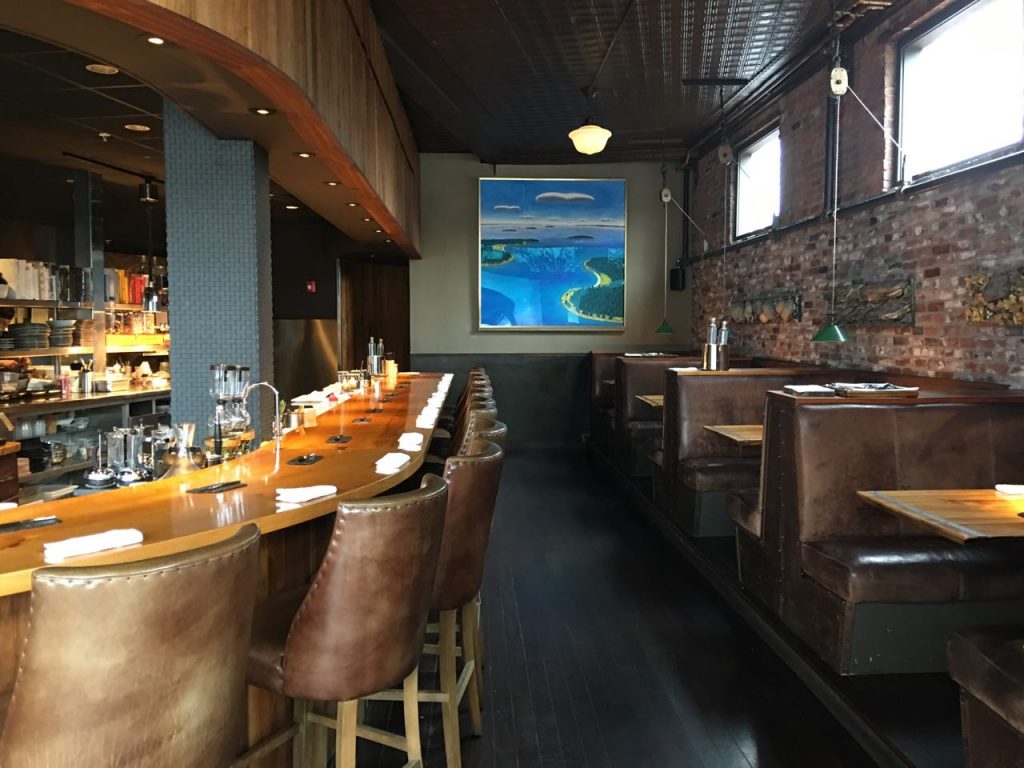 When planning where to eat in Portland, Maine, make reservations at Hugo’s, which won the 2017 James Beard Best Chef Northeast award.

When dining at Hugo’s, opt for the Blind Tasting Menu: It’s worth every penny of its $90pp cost (entire table must order; wine pairings are an additional $75 per person).

Hit The Honey Paw for Asian-influenced fare and house-made noodles; but don’t overlook the lobster toast appetizer which not only is a delish way to awaken your taste buds, but also benefits ending child hunger in Maine ($1/order donated to Full Plates). Polish off your meal with the soft-serve ice cream with caramelized honey, honeycomb, and a chocolate shell (no, really, save room for it).

Naturally, Eventide Oyster Co is famed for its oysters as well as its other raw bar options. But, this cozy spot also is favored for its gussied-up take on the classic Maine lobster roll. Eventide’s serves its brown butter lobster roll warm on a Chinese-style steamed bun. 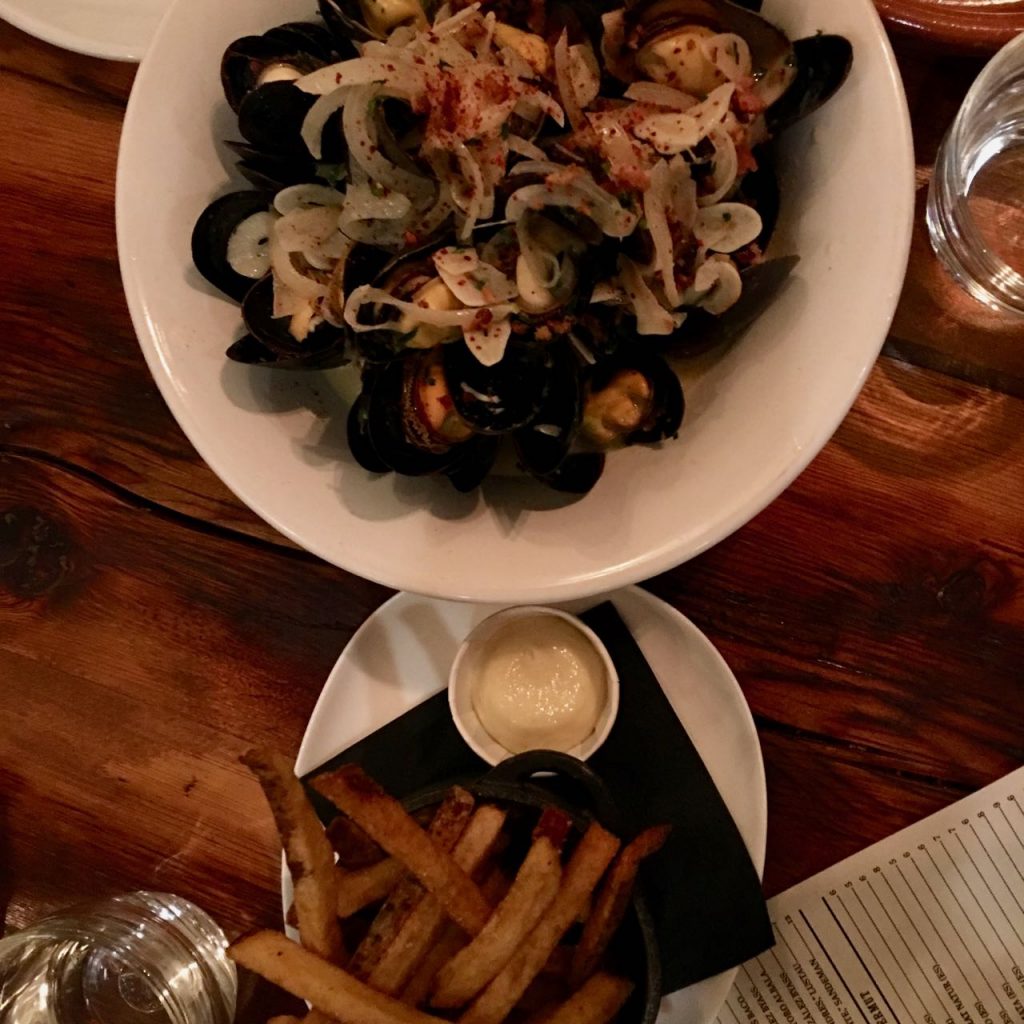 Mussels and frites at Chaval, Portland.

I tried to pop into Chaval, a neighborhood brasserie, on a midweek winter’s night and was turned away: no tables available. That’s a sign of how good it is. Sansonetti’s seasonal French- and Spanish-flavored menu offers small and medium plates and a few heftier entrées.

During a recent visit, the table next to me ordered the family-style coq au vin, and it smelled delicious. And, the praises sung by the four diners sharing it backed that up. For dessert: churros. Trust me on this, get at least one order. Honestly, I’d go in for dessert alone, if I could get a seat. Lopez, a two-time Beard semi-finalist for Outstanding Pastry Chef, is a master.

Piccolo, this talented couple’s first restaurant, pays homage to Sansonetti’s heritage. Here, he elevates the traditional, rustic Calabrian and Abbruzzian family fare he grew up eating. Pretty much everything on the menu is scratch-made. This vest-pocket restaurant also offers blind-tasting, six-course Sunday Suppers at its six-seat counter for $75 (must reserve at least one week in advance by phone).

Any discussion of where to eat in Portland must include Fore Street. Chef Sam Hayward put Portland on the national culinary radar when he won Maine’s first Best Chef Northeast award in 2004. Fore Street, with its open kitchen comprising a wood-burning oven, grill, and turnspit, and its industrial chic décor, remains the standard bearer.

It’s as reliable, delicious, and committed to fresh, local, and sustainable now as it was when it opened in 1996. This year, 2019, it was a semifinalist for the James Beard Outstanding Restaurant award. A handful of tables are held open each night on a first-come basis, but if this is on your bucket list, definitely make reservations.

Scales, owned by Hayward and Dana Street of Street & Co., opened on Portland’s waterfront in 2016. Chef Fred Eliot blends classic French techniques with traditional New England ingredients. The menu includes seafood favorites, such as steamed or roasted lobster, fresh Gulf of Maine fish, and fried oysters and clams, as well as chowders and lobster rolls. Every dish is skillfully prepared and beautifully presented. 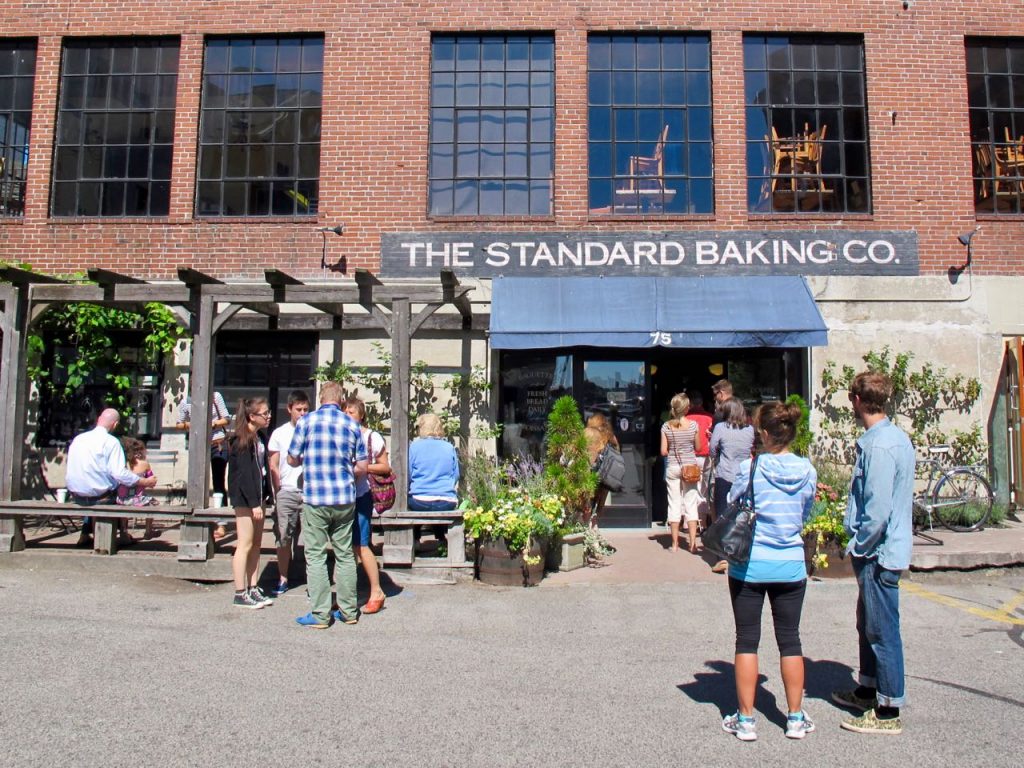 Forget Keto, and indulge in a carbo binge at Standard Baking Company. Located underneath Fore Street restaurant and facing the harbor across Commercial Street, this a great place to pick up croissants, pastries, breads or other goodies to enjoy on a waterfront bench, or, even better, on a Casco Bay Lines mailboat tour. Owner Alison Pray has made semifinalist a few times and finalist in 2018 for the James Beard Outstanding Baker award. 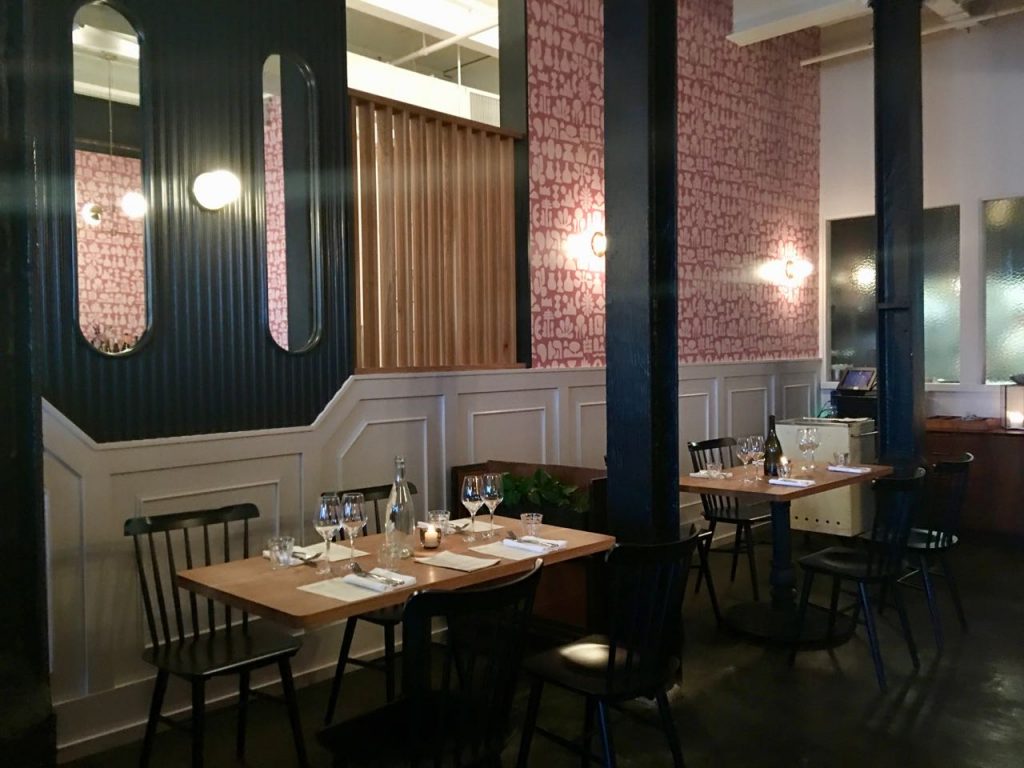 Drifter’s Wife evolved out of a natural wine store.

Drifters Wife evolved out of Maine & Loire, a natural wines shop. It’s earned national recognition as one of America’s best wine restaurants and best new restaurants as well as being a semi-finalist in the James Beard Best New Restaurant category. Chef Ben Jackson’s daily-changing menu is small and appears simple, but the dishes are sophisticated, multi-layered, and delicious. 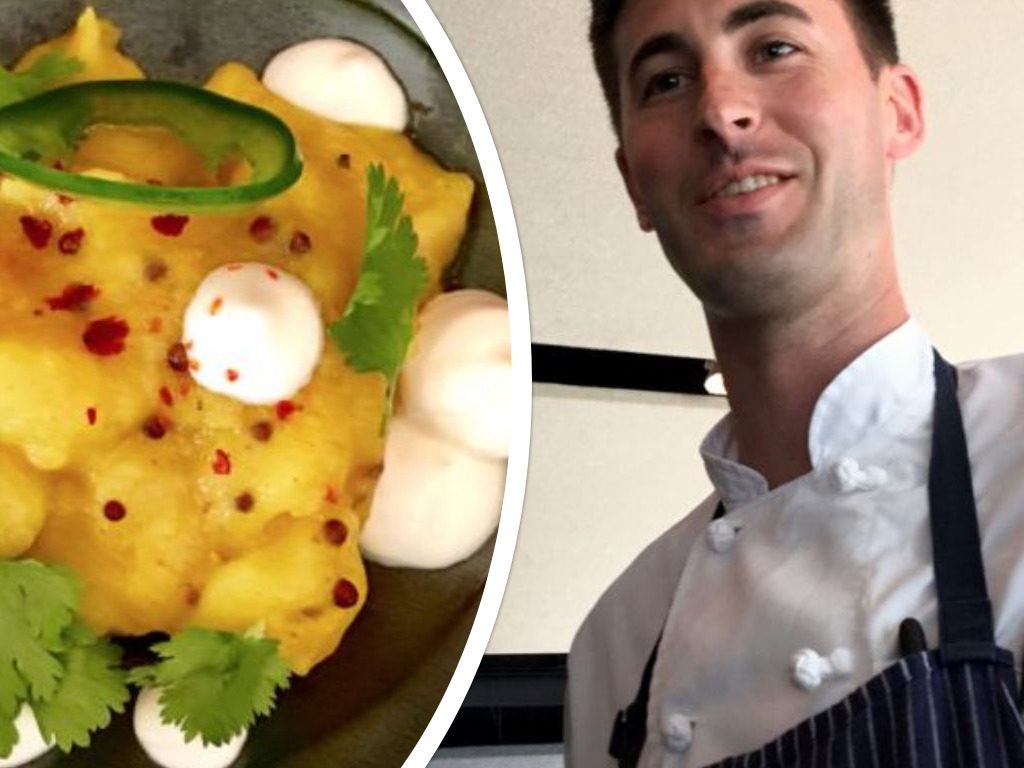 One of Chef Matt Ginn’s first jobs was picking strawberries at Maxwell’s Farm, in his native Cape Elizabeth. He gained national attention on Chopped. When invited back to participate in Chopped Champions, he made it to the final round. He hangs his toque at Evo, where he prepares creative Eastern Mediterranean dishes from local Maine ingredients. He’s also executive chef at the Chebeague Island Inn.

Chef/owner Vien Dobui made it to the semi-final round for the James Beard Best Chef Northeast in 2019, for his Vietnamese noodle restaurant, Công Tu Bôt. His Pho Ga (chicken pho) consistently earns accolades, and Bon Appétit showcased his Ca Ri Chay (curry noodle soup with coconut milk, turmeric, and lemongrass), making that another popular choice. 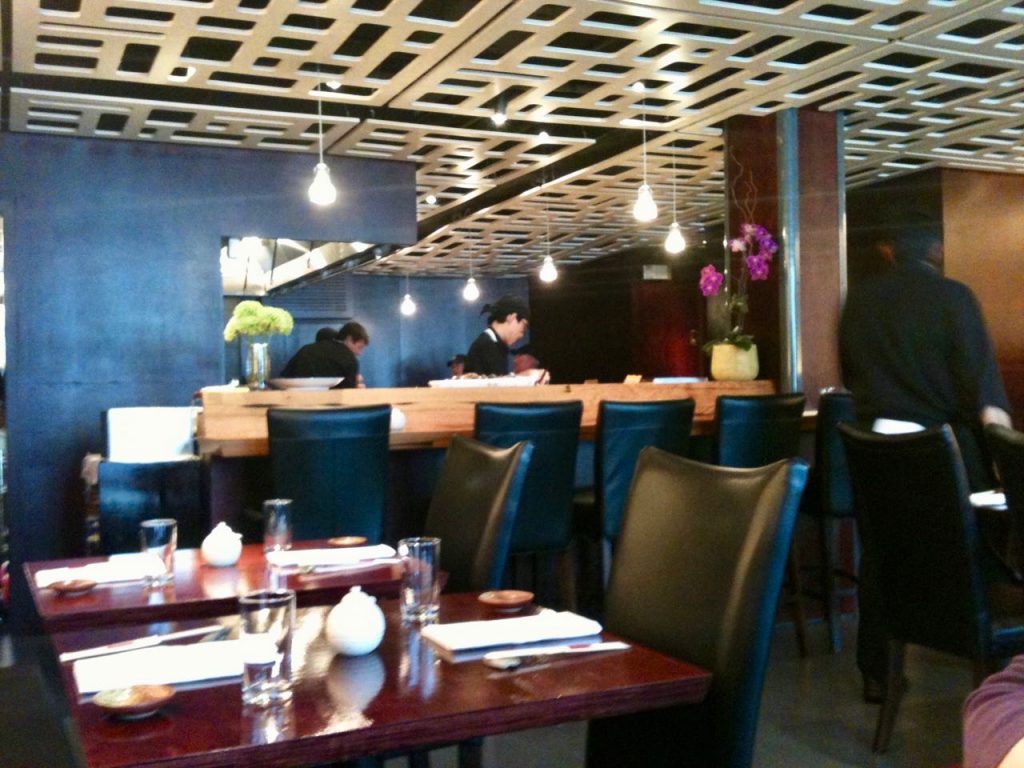 Trained in both French and classical Japanese techniques, chef Masa Miyake has developed a following far beyond Maine for his innovative sushi. He crafts his fare from primarily local ingredients, including vegetables, fowl, and pork raised on his farm. A finalist for the Beard Best Chef Northeast award, Miyake has two Portland restaurants, his namesake Miyake and Pai Men Miyake, a ramen shop (the pork buns!). Miyake’s four-course tasting menu is $60, but treat yourself to the omakase chef’s tasting menu($75). 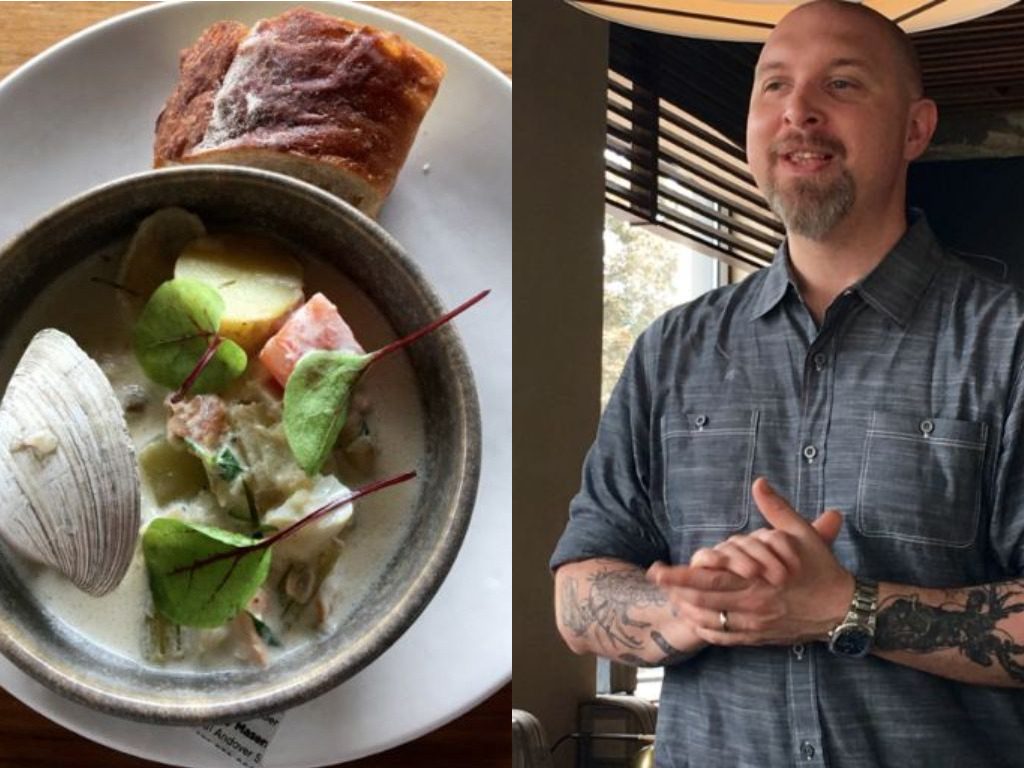 Executive chef Josh Berry gives local fare a contemporary spin at Union Restaurant, sited in the Press Hotel, a Marriott Autograph member. Berry spent one year as a vegetarian and another gluten-free in order to better understand his guests and to create delicious fare for them. Like most of Portland’s other top chefs, he’s passionate about sustainability. If you want to watch this open kitchen in action, ask for a counter seat.

A longtimer in the Portland dining scene, David’s serves contemporary American fare as well as pizza; vegetarian, vegan and gluten-free options available. Never one to rest on his laurels, chef-owner David Turin opened David’s Opus 10, an 18-seat fixed-price restaurant within the same space. 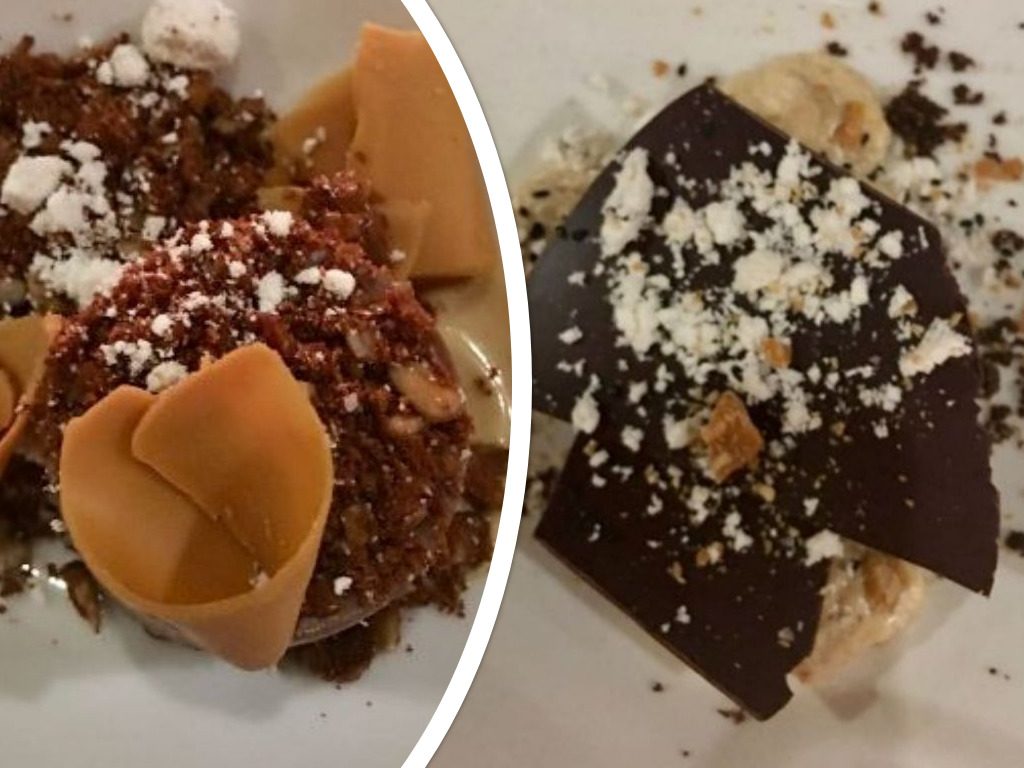 When planning where to eat in Portland, don’t forget dessert. You’ll find there’s nothing gross about Gross Confection Bar, a dessert lounge in the heart of Portland’s Old Port.

Sweeten the evening—or not— at Gross Confection Bar. Chef/Owner Brant Dadaleares creates delicious sweet and savory desserts. His chocolate mess (fudge cake, triple chocolate brownie, toasted marshmallow, caramel corn, peanut brittle, salted caramel jam, coconut sorbet) is a thing of beauty, that demands just one more bit, even though you’re too full. Ditto for the chocolate budino, made with dulcey, brown butter, sunflower seeds gjestost, and carmelia. Prefer savory? Choose from the cheese and charcuterie section of the menu. Can’t decide? Tasting options, presented on a board, are available. I’m already planning to return with a group of friends for those. And yes, there are cocktails and mocktails, too.

Portland’s latest James Beard Award winner is Rob Tod, founder of Allagash Brewing Co. Tod won the 2019 award for Outstanding Wine, Beer, or Spirits Producer. It’s open for brewery tours (classic, private, deep dive, and grand cru) and tastings every day, but be sure to make reservations in advance. Enjoy a brew with a lobster roll from the Bite Into Maine food truck, a favorite for its lobster rolls.

Want the story behind Maine’s fresh local, sustainable and responsibly sourced fare? Join Maine Food for Thought on its three-hour Land, Sea to Fork luncheon taste and tell. You’ll visit six noted in town restaurants for a tasting course along with the story behind the ingredients. Tours meet at the first restaurant, cover about a mile of easy walking, and are limited to a maximum of 12 participants. New this year is A Toast to Maine, which features five tastings, three paired with land-to-bottle beverages. 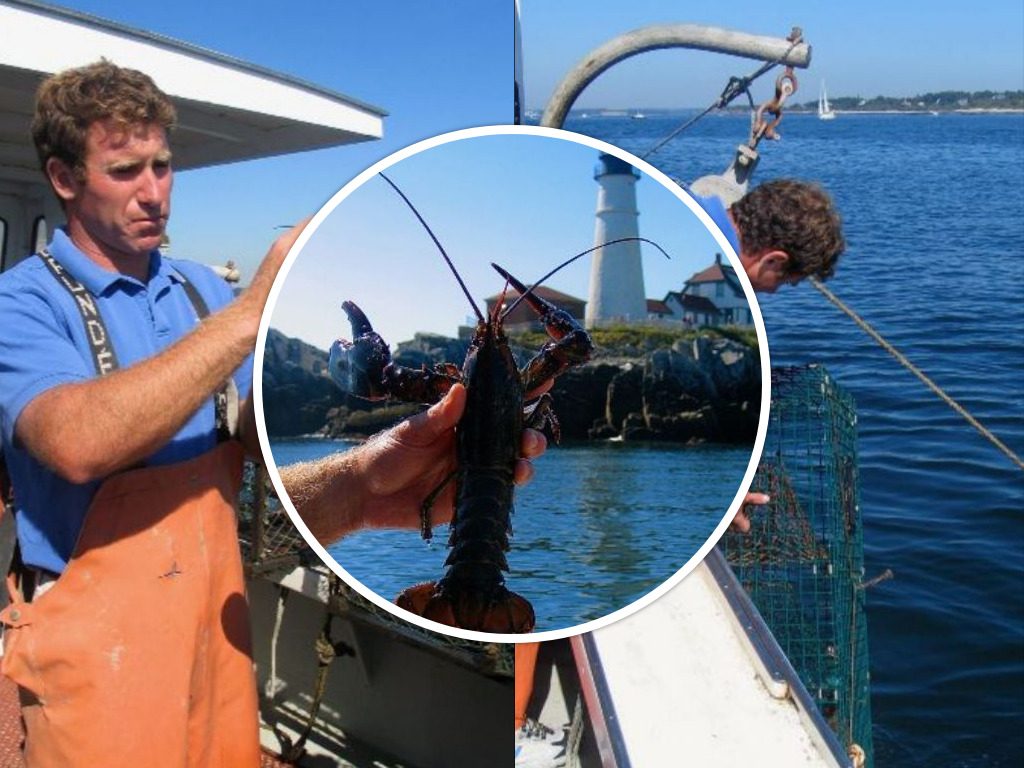 Learn lobster facts and lore while cruising aboard a working lobster boat.

Lobster, from basic boiled to fancy concoctions, appears on many menus, but if you want the story behind Maine’s tasty crustacean, join Capt. Tom Martin. During the winter, Martin fishes commercially, but when summer comes, he takes passengers aboard his 40-foot Lucky Catch lobster boat for lobster 101. During the roughly 90-minute tours, passengers can participate or simply enjoy the cruise while picking up lobster lore. Any lobsters caught during the tour are available for boat price, and you can take them to Portland Lobster Co., on the waterfront, to have them cooked.

Of course, if you’re a lobster fiend, you might want to check the Maine Travel Maven’s list of favorite Maine lobster shacks or lobster experiences.

Where to stay in Portland

You’ll find most of the major chains represented, but no upper-end luxury ones. The Maine Travel Maven has reviewed these three, upscale boutique hotels, each well situated for exploring the city.  Definitely make advance reservations. 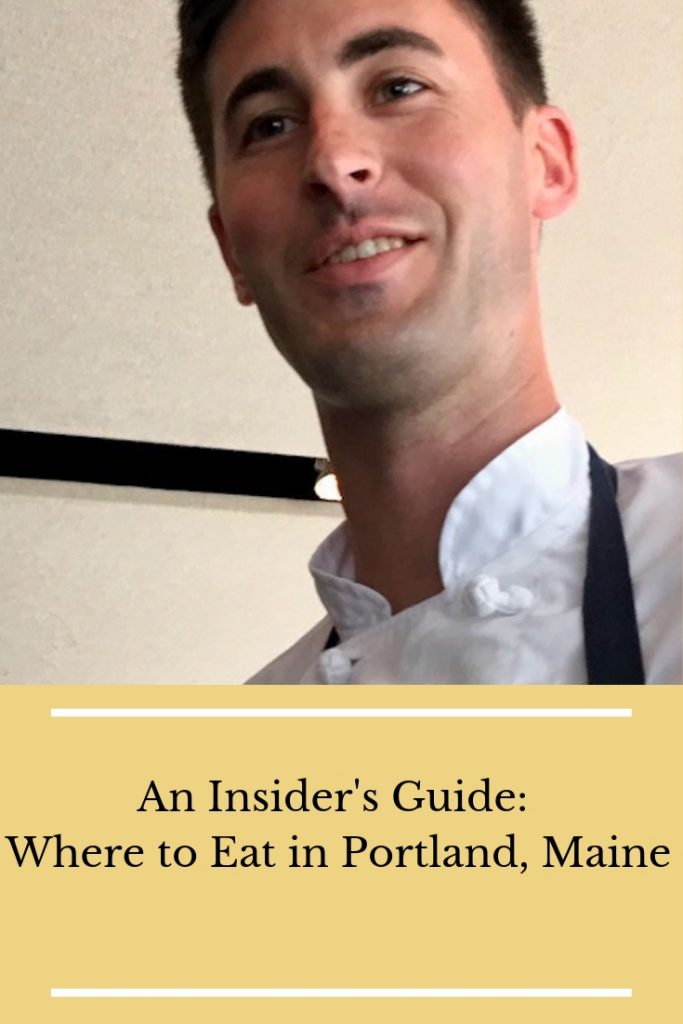