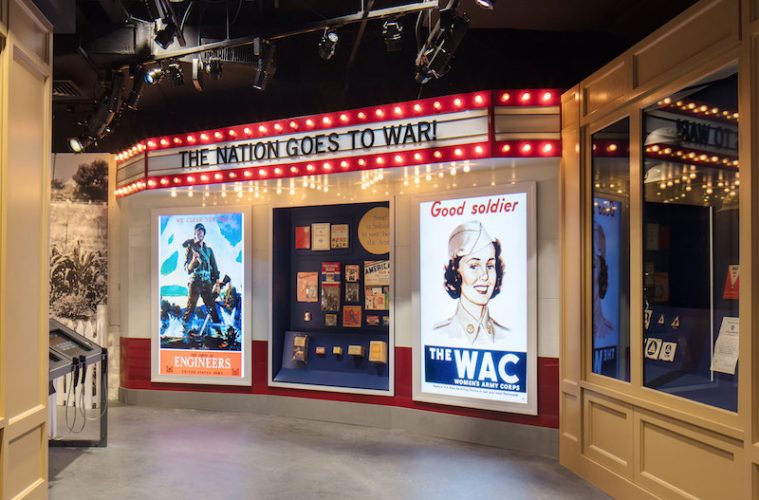 National World War II Museum: To Remember What Should Never Be Forgotten

Witnessed from generation to generation, country to country, there is a price on freedom. Horrifically costly was World War II, not in money, but in death. Hailed as “the war that changed the world,” the numbers are numbing: More than 65 million people died, mostly civilians.

Freedom. You’d think we would have learned our lesson after World War I, dubbed “The War to End All Wars.”

But just over two decades later, America had to send what is referred to as “The Greatest Generation” to fight against an evil the likes of which the world could not tolerate.

Franklin Delano Roosevelt said, “This generation of Americans has a rendezvous with destiny.” Very few doubt our country’s freedom would exist today without these wars.

The D-Day Museum, dedicated in 2000, is now deemed by Congress as America’s National WWII Museum. This complex in New Orleans, LA, tells the story of the brutal experience that saved the world – “why it was fought, how it was won, and what it means today – so that all generations will understand the price of freedom and be inspired by what they learn” according to its website. 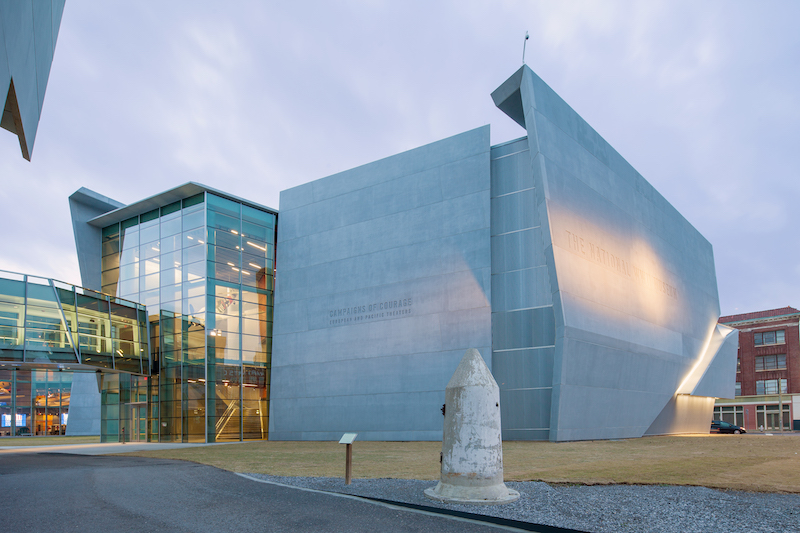 Six acres, so plan ahead

The Big Easy isn’t that big, and getting to the WWII Museum is very easy. Deciding how long to visit is not. We suggest a minimum of four hours up to a couple of days for those very interested in the topic.

The museum is comprehensive and well designed to move visitors about on the six-acre campus. However, individual planning is a must, because seeing highly popular venues like Beyond All Boundaries and Final Mission: USS Tang Submarine Experience requires admission tickets.

The Beyond All Boundaries film, narrated by Tom Hanks, is about the horrors of war and the Allied Forces path to victory. It’s shown daily in the Solomon Victory Theater with hourly screenings from 10 a.m., to 4 p.m. Sunday through Thursday and 5 p.m. Friday and Saturday.

Final Mission: USS Tang Submarine Experience places visitors aboard the most successful submarine in World War II for its final war patrol on October 25, 1944. Guests get the feel of being aboard a sub during battle and should gain an appreciation of the bravery and sacrifice of those who served in the intense, confined world of underwater warfare.

With tickets and schedule ready, a great starting place is the Dog Tag Experience, where visitors get a credit-card sized identification tag bearing an image of a dog tag akin to what soldiers received after enlisting.

With it, participants board the L.W. “Pete” Kent Train Car Experience, which simulates a rail coach that carried enlistees to their assigned training sites. Aboard, visitors have the option of registering to be paired with an actual participant in World War II, a soldier or civilian. The dog tag card can be scanned at stations throughout the complex to learn how the person experienced actual war moments. That info can be accessed digitally later at home if you’ve volunteered your email address.

Clearly defined exhibit galleries create separate areas for visitors to explore while choosing what they want to see at their own pace.

The Arsenal of Democracy: The Herman and George R. Brown Salute to the Home Front is at the heart of The National WWII Museum’s mission, which tells how the war was won.

Allied victory was an epic undertaking fueled by stateside industry, ingenuity, and the labor of millions of Americans.

Multimedia and interactive displays, artifacts and oral histories create countless opportunities for visitors to make personal connections with the men and women who helped win the war.

The entryway to The Arsenal of Democracy shows a short, narrated video on a loop telling the story of Herman and George Brown, known for large, road construction projects. When the U.S. Navy asked the Browns to build destroyer escorts (DEs), even though they’d never before built a ship, they figured it out and constructed some 355 warships in Louisiana, doing so with exceptional quality and under budget.

Gathering Storm covers the historical events that preceded the outbreak of World War II: the 1919 Treaty of Versailles, the rise of fascism, worldwide economic depression, German and Japanese aggression.

A House Divided explores the debate between isolationists and interventionists that gripped America from the outbreak of war in Europe until the attack on Pearl Harbor in 1941.

America Besieged is dominated by a 50-foot-wide projection screen, an appropriately large surface on which to display the shock and chaos of Pearl Harbor on December 7, 1941, when America was thrust into the war and became fully committed on a global scale.

America Responds conveys how the war unified the nation, as American media joined the US government in publishing iconic WWII propaganda posters, publications, movies and newsreels, and every home could contribute through rationing, scrap-metal drives and bond drives. Military enlistments soared.

Approximately 16 million Americans – more than 10 percent of the population – eventually served in uniform.

War Affects Every Home shows life on the home front with rationing and shortages of consumer goods, fuels and food. Women handled these issues in the home and took on new employment, while young through old contributed with victory gardens, bond purchases and scrap drives. A glimpse into a 1942-style home may look familiar for some visitors. 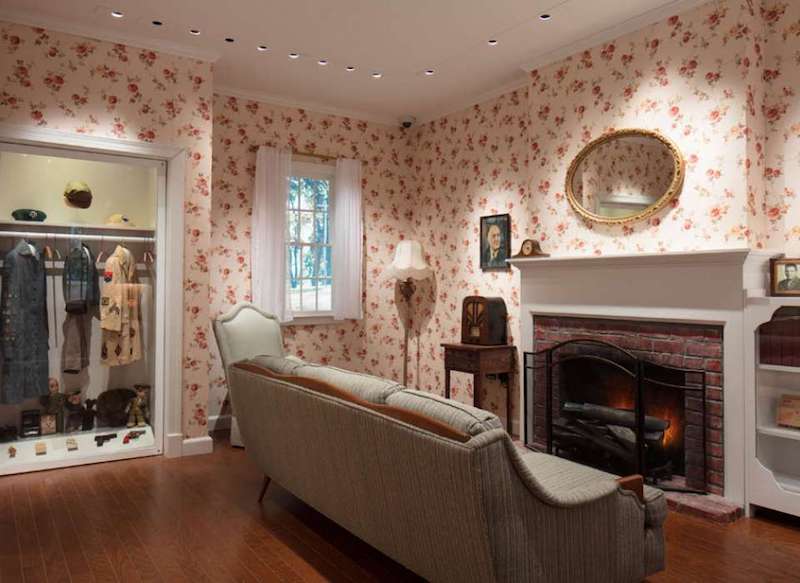 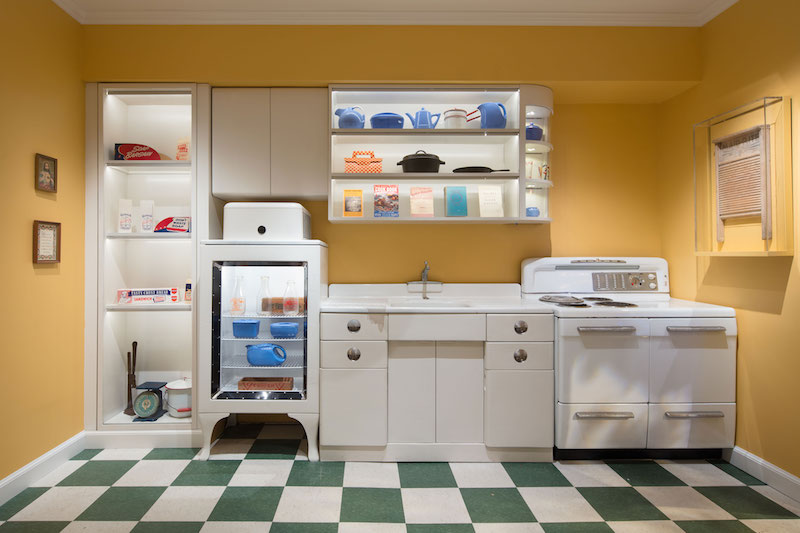 The exhibit United but Unequal: I Am an American delves into matters of world war racism. 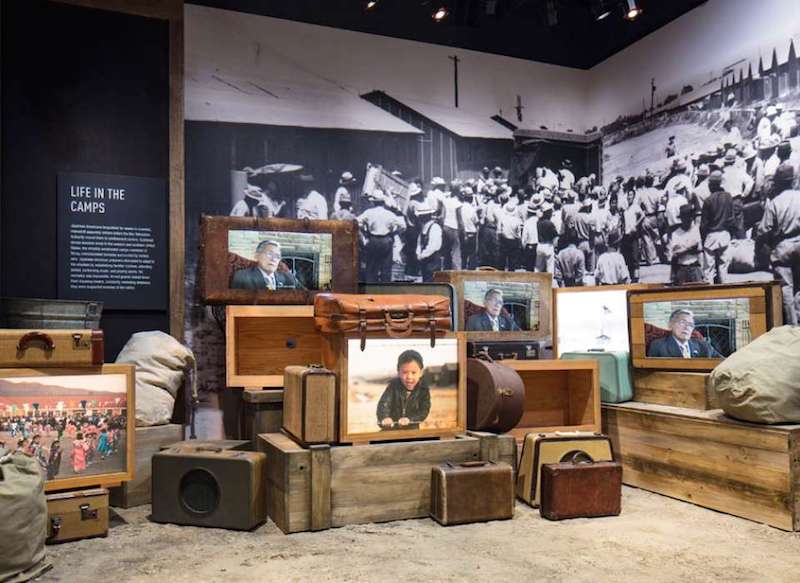 This “terrible irony” existed on the home front as well. Because of Pearl Harbor, Japanese Americans were singled out for intense suspicion and contempt. In fact, President Roosevelt issued an executive order that forced Japanese American citizens into internment camps without due process.

Citizens to Warriors is set in a military barracks environment and highlights the massive effort to rapidly train and mobilize millions of civilians to become the nation’s troops. Unfortunately, segregation existed in the ranks as not all soldiers’ experiences were alike: women, African Americans and Japanese Americans all served in segregated units. But all agreed they were fighting for the same cause. 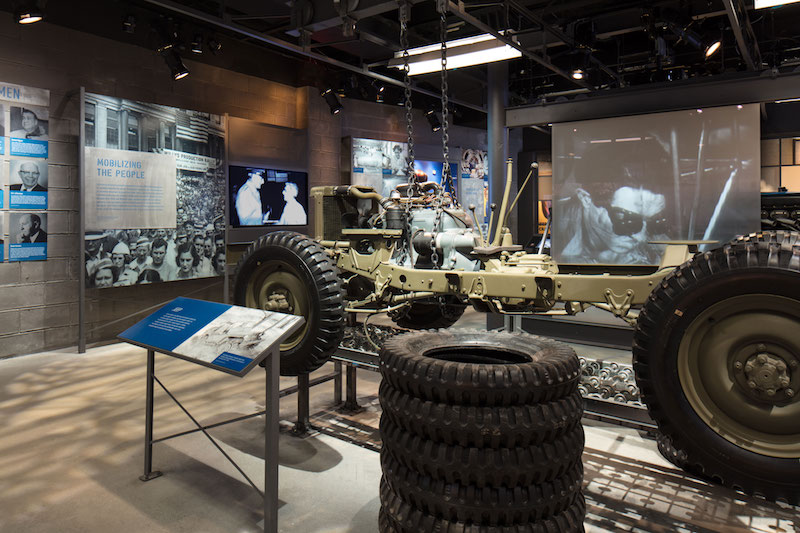 Yet the Manhattan Project was the game changer. A mighty secret, the most consequential scientific innovation was the creation of the atomic bomb, thus ushering in the Nuclear Age and likely causing the war’s end.

Beyond the permanent exhibits

There are several specialty eateries as well temporary exhibits like The Pelican State Goes to War: Louisiana in World War II, a tribute to the manufacture of the Higgins Boat, designed by Andrew Higgins of Louisiana. The Higgins Boat was a landing craft, vehicle, personnel (LCVP) used in amphibious, particularly important in the D-Day Invasion. Another example is So Ready for Laughter: The Legacy of Bob Hope, which focuses on the legendary comedian and his role in elevating troop morale through USO tours and more.

There’s even more to see at the U.S. Freedom Pavilion and the Boeing Center, the wow factor because actual trucks, tanks and WWII aircraft are on display. The B-17E Flying Fortress My Gal Sal hangs here, and catwalks let the brave climb for a closer view.

Visitors to the National World War II Museum could spend much time in the Campaigns of Courage: European and Pacific Theaters, featuring both the Road to Berlin: European Theater Galleries and the Road to Tokyo: Pacific Theater Galleries. The rise of Germany is explored. Road to Tokyo has 10 galleries that trace the early war’s trail from Pearl Harbor to Tokyo Bay by way of New Guinea and Southeast Asia, the Himalayas, Burma, the islands of the Pacific, China, India, and Alaska. 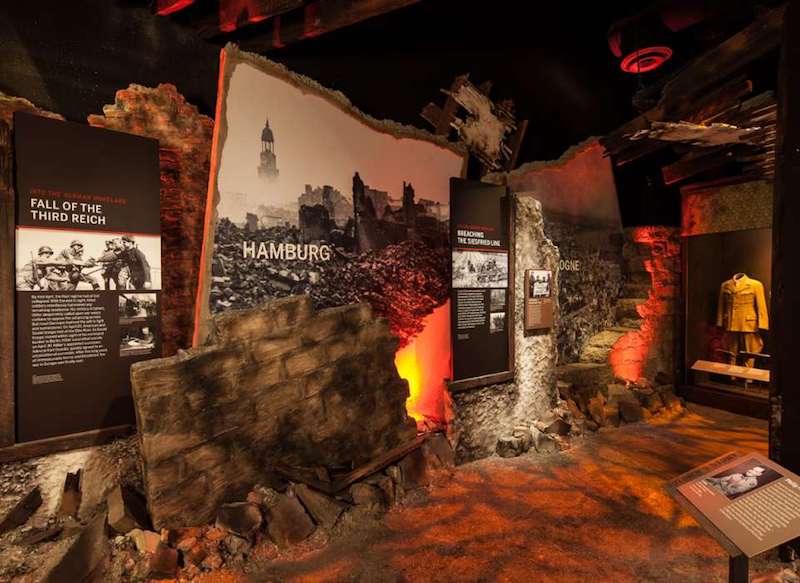 The hottest, new museum attraction ar the National World War II Museum is PT-305: The Ride of a Lifetime. Visitors can tour and ride this restored patrol-torpedo (PT) boat, the fastest U.S. naval ship in World War II, on her home waters where she was originally tested by Higgins Industries more than 70 years ago. Advance tickets are required. Rides last approximately 90 minutes and are available on Fridays and Saturdays during most of the year. On Fridays in January and February, rides and deck tours are available by appointment only for an exclusive buyout or group rentals. 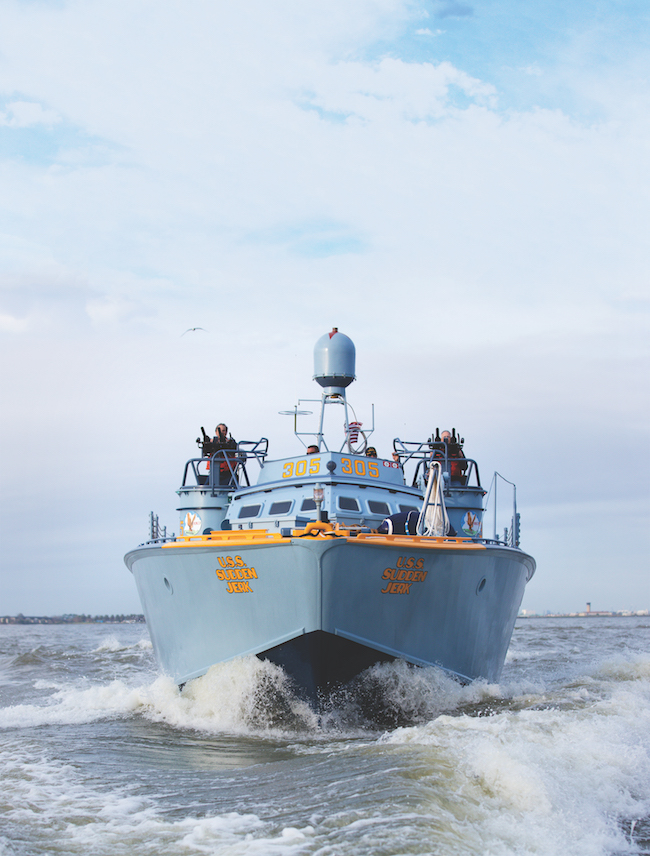 Deck tours are approximately 45 minutes and offered on Wednesday, Thursday, Friday, and Sunday from 10 a.m. to 3 p.m. On Fridays in January and February, deck tours are available by appointment only. Price is $15 per person; $12 for seniors, children ages 12-17, military, and museum members.

The National WWII Museum points out: “Every day, memories of World War II – its sights and sounds, its terrors and triumphs – disappear.”

For those who agree it’s best to remember the past lest we repeat it, the museum’s message is too important to ignore.

Many are getting the message: The museum had three-quarters of a million visitors last year, and it ranked as the No. 2 museum in the world and No. 2 in the nation in the 2017 TripAdvisor Travelers’ Choice awards (up from #11 in the world and #4 in the U.S. the previous year).

Museum hours are Mon.-Sun. 9 a.m.-5 p.m.; closed major holidays. Admission: $27 for adults; $23.50 for seniors over 65; $17.50 for students K-12 and college with ID and active military with ID and for museum members. It’s free for WWII veterans and children under five. Beyond All Boundaries and Final Mission: USS Tang Submarine Experience are each $6 extra with general admission; also, second-day passes are $6 extra with general admission.

The authors were guests of the National World War II Museum and the New Orleans Convention & Vistors Bureau.