Turkish delights: What to see and do in Istanbul, Türkiye

The simplest answer to the question of what to see and do in Istanbul is everything.

Heartbreaker, dream maker, love taker: Istanbul reels in visitors with its heady mix of sights, sounds, and aromas and fascinates them with its history and heritage. It confounds them with its juxtaposition and slays them with architecture. And it leaves them pining to return. 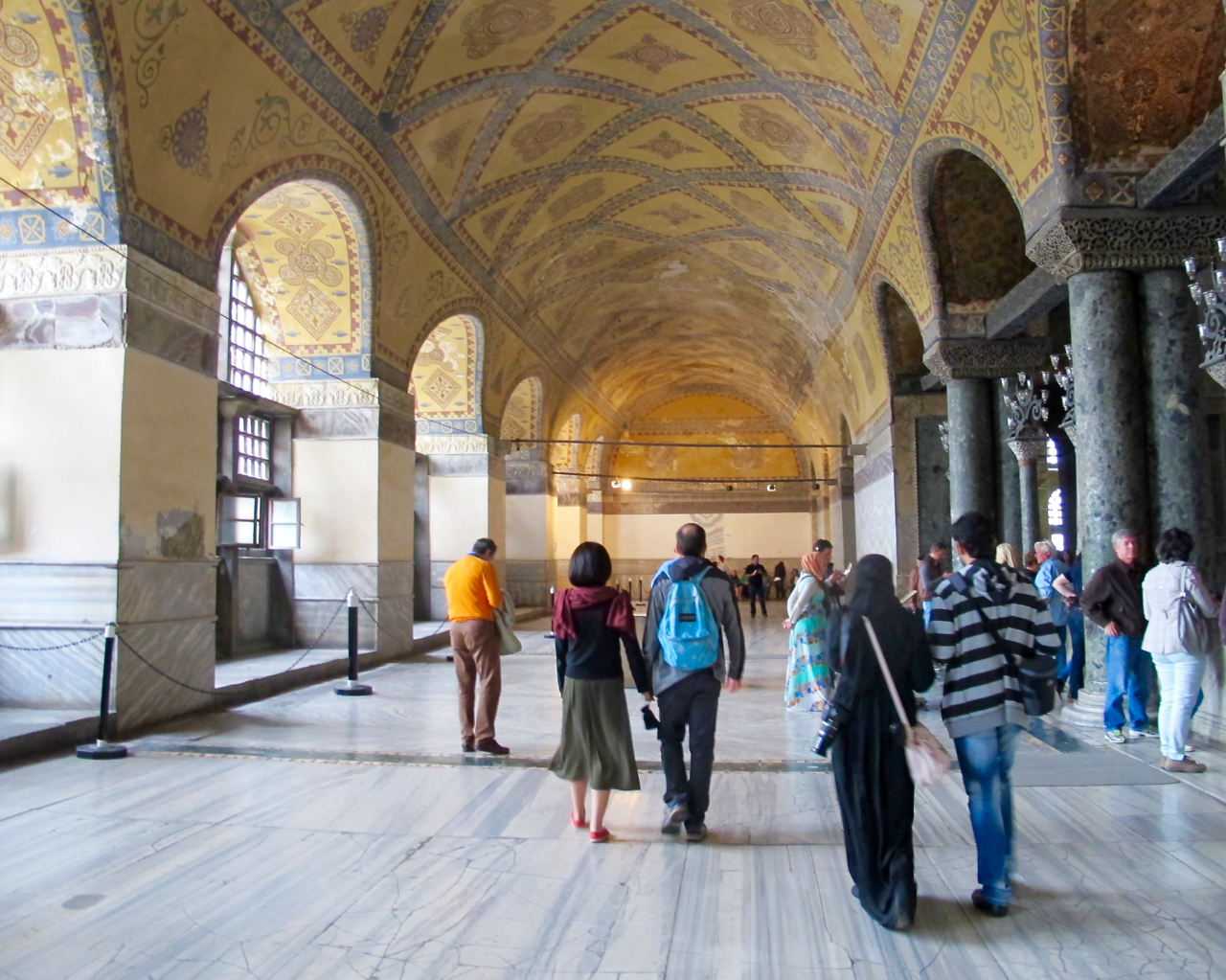 Islam and Christianity rub elbows in Hagia Sophia, which dates from the year 360. (Credit: Hilary Nangle)

Contemporary Istanbul’s symphonic dissonance is rooted in its strategic siting flanking the Bosphorus Strait, which divides Europe from Asia while uniting the Marmara and Black Seas. The location invited occupation and conquest, with each invader contributing to the cultural medley. First came Greek King Byzas, who established Byzantium around 700 BC.

Roman Emperor Constantine the Great followed 1,000 years later, declaring it the capital of the Roman Empire, and allowing Christianity in what became Constantinople. The Ottomans arrived in 1453, renaming the city Istanbul, making it the empire’s seat, and introducing Islam. In 1923, Turkey became a secular democratic republic.

Istanbul today is a treasure chest brimming with the spoils of war complemented by the prizes commanded by power and wealth; a place where Islam and Christianity rub elbows, where ancient is juxtaposed against modern, and where eastern influences meld with western ideals.

In Istanbul, it is said that everything is possible but everything has a price. Accept that, and this pearl is yours. Sure, one can explore unaided, but a local guide, such as Levent Evkuran from luxury travel specialist Cox & Kings, makes it easier to navigate the city’s dizzying diversity, discover the unexpected, and enjoy authentic experiences paired with private access and bespoke activities. 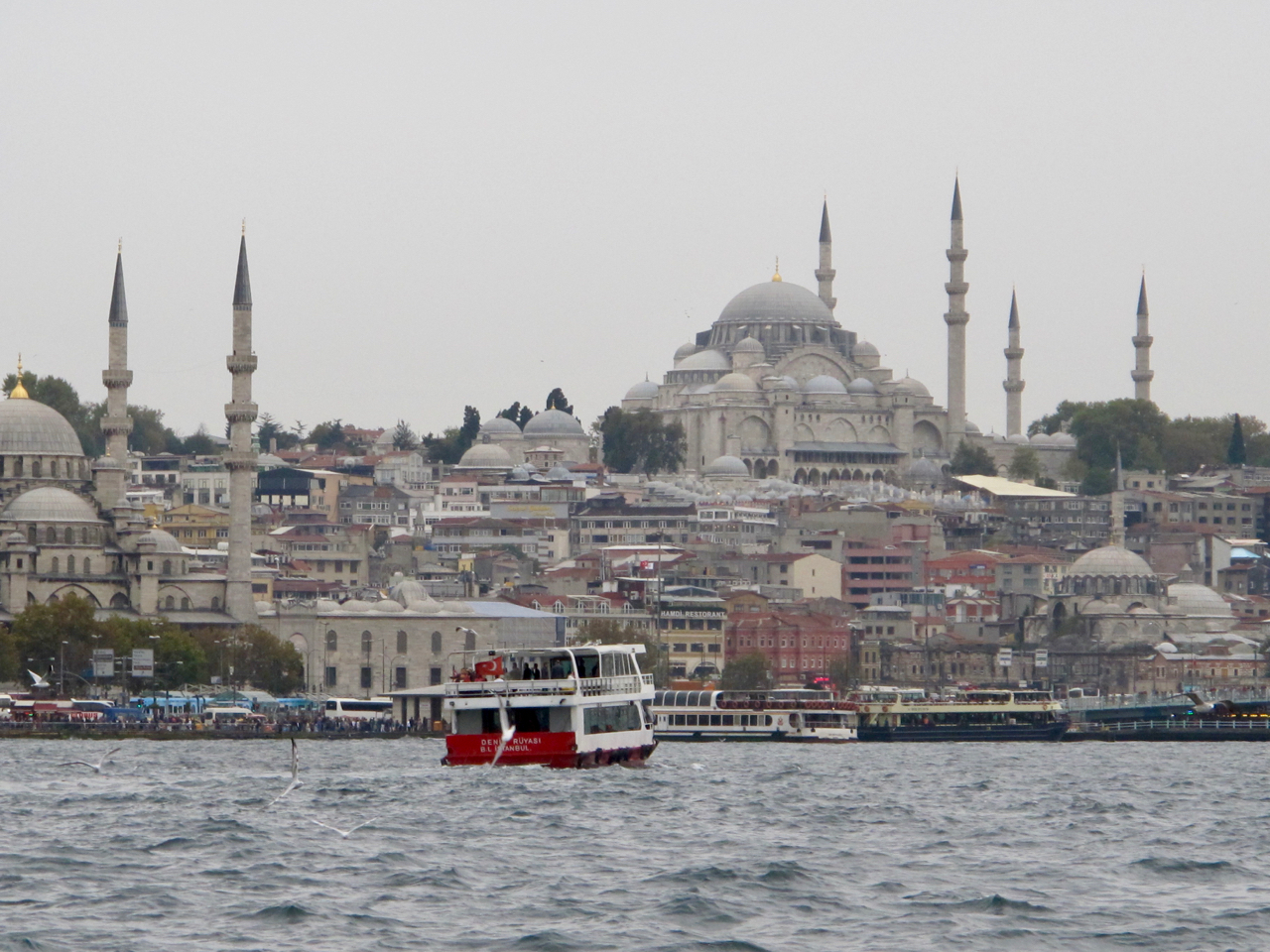 Even on a gray day, viewing Istanbul’s skyline from a cruise on the Bosphorus is a treat. (Credit Hilary Nangle)

Get oriented with a Bosphorus cruise

“To be able to see the Bosphorus, even from afar—for Istanbullus this is a matter of spiritual import that may explain why windows looking out onto the sea are like the mihrabs in mosques, the altars in Christian churches, and the tevans in synagogues, and why all the chairs, sofas, and dining tables in our Bosphorus-facing sitting rooms are arranged to face the view,” wrote Pulitzer Prize-winning author Orhan Pamuk in Istanbul: Memories and the City.

The Bosphorus is Istanbul’s Siren’s song. Seeing the city from the water puts it into geographic perspective while delivering sigh-worthy views of the eye candy peppering the shorelines and seven hills. A ferry will do but a sunset cruise aboard a private boat enhances the experience.

When cruising on the Bosphorus, look for The ornate neo-Baroque Ortaköy Mosque, one of many architectural wonders salting the shoreline. (Credit: Tourism Türkiye)

Highlights of a clockwise cruise include the mid-19th-century Dolmabahce Palace, home to the last six Ottoman sultans; the ornate neo-Baroque Ortaköy Mosque; the art nouveau Egyptian Consulate fronting Bebek Bay; the mid 15th-century Rumelihisari fortress; the fanciful stone Küçüksu Pavilion; the sea-facing façade of Kuleli Askeri, Türkiye’s oldest military high school; the white marble Second Empire-style Beylerbeyi Palace; the Maiden’s Tower, dating from 5 BC and source of many local legends; and Topkapi Palace, capping the Istanbul Peninsula promontory framed by the Marmara Sea, the mouth of the Bosphorus, and the Golden Horn, an inlet that forms a natural harbor.

Salting the European shoreline are some of the city’s finest five-star properties. At the Four Seasons Hotel Istanbul Bosphorus, Shangri-la Bosphorus, and Çırağan Palace Kempinski, adjoining a 17th century Ottoman imperial palace, you can awaken and retire to Bosphorus views and water music accompanied by the muezzin calling prayers. It’s a fine way to begin to appreciate Istanbul’s seductive yet spiritual underpinning. 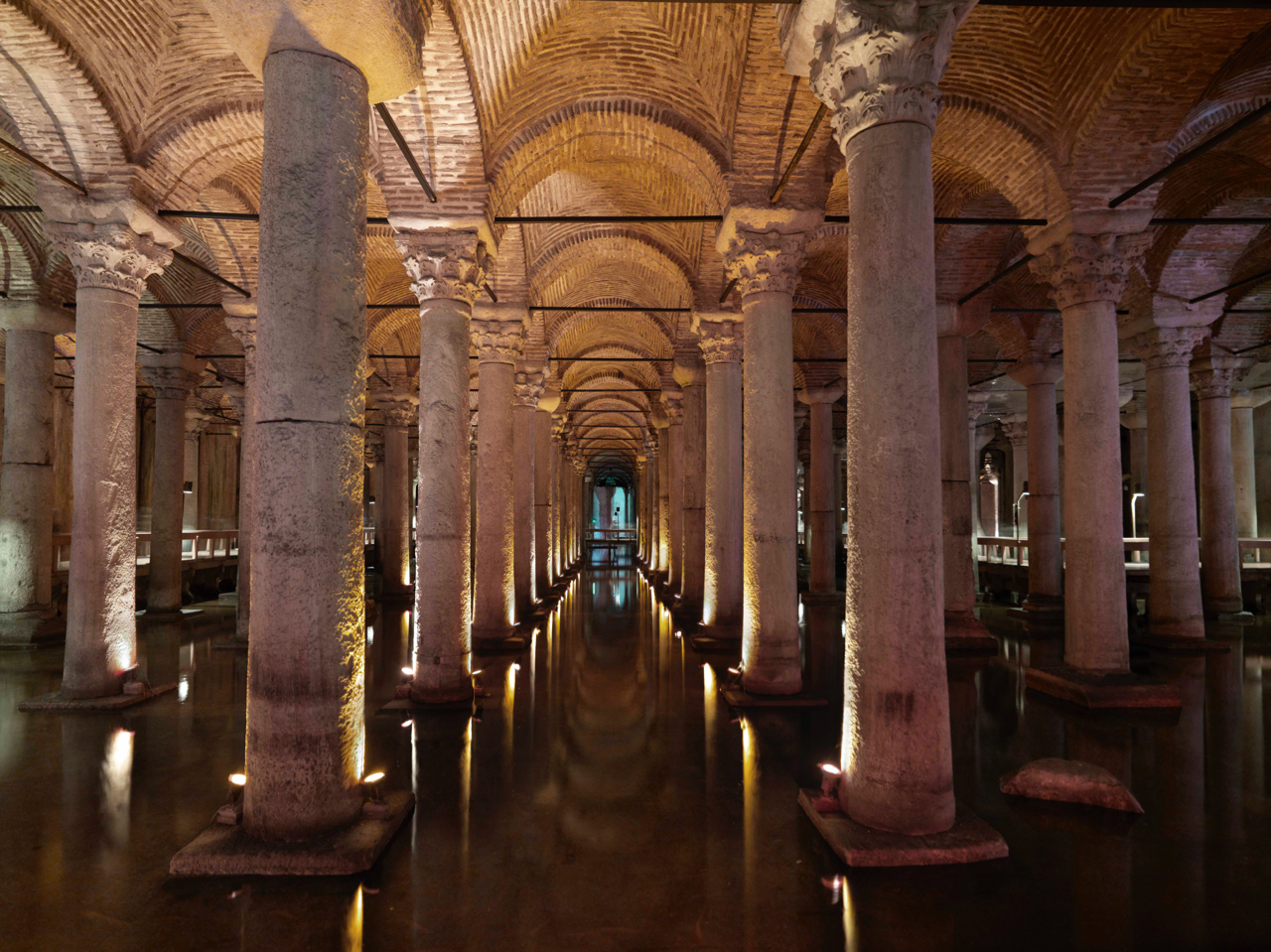 What to see and do in Istanbul: architectural wonders

After cruising the Bosphorus to get your bearings, head into—and under—the city’s heart. There’s no better place to whet one’s curiosity about Istanbul’s architectural underpinnings than in the Basilica Cistern, the massive subterranean cistern locals call yerebatan sarayi (sunken palace). Upon descending into the cool, damp, eerie darkness, one half expects to be welcomed by Chyrron, who ferried souls into Hades, or James Bond, who rowed through these waters in From Russia with Love. Instead, walkways illuminated with soft golden light draw you into the depths.

Created in the 4th century by Constantine, enlarged in the 6th century by Justinian, and rediscovered by a researcher in 1545, this nearly 108,000-square-foot watery realm is topped with a cross-vaulted ceiling supported by 336 marble columns in a dozen rows of 28. The Corinthian, Ionic, and Doric capitals topping the columns likely were scavenged from Roman ruins; ditto for the two heads of Medusa. 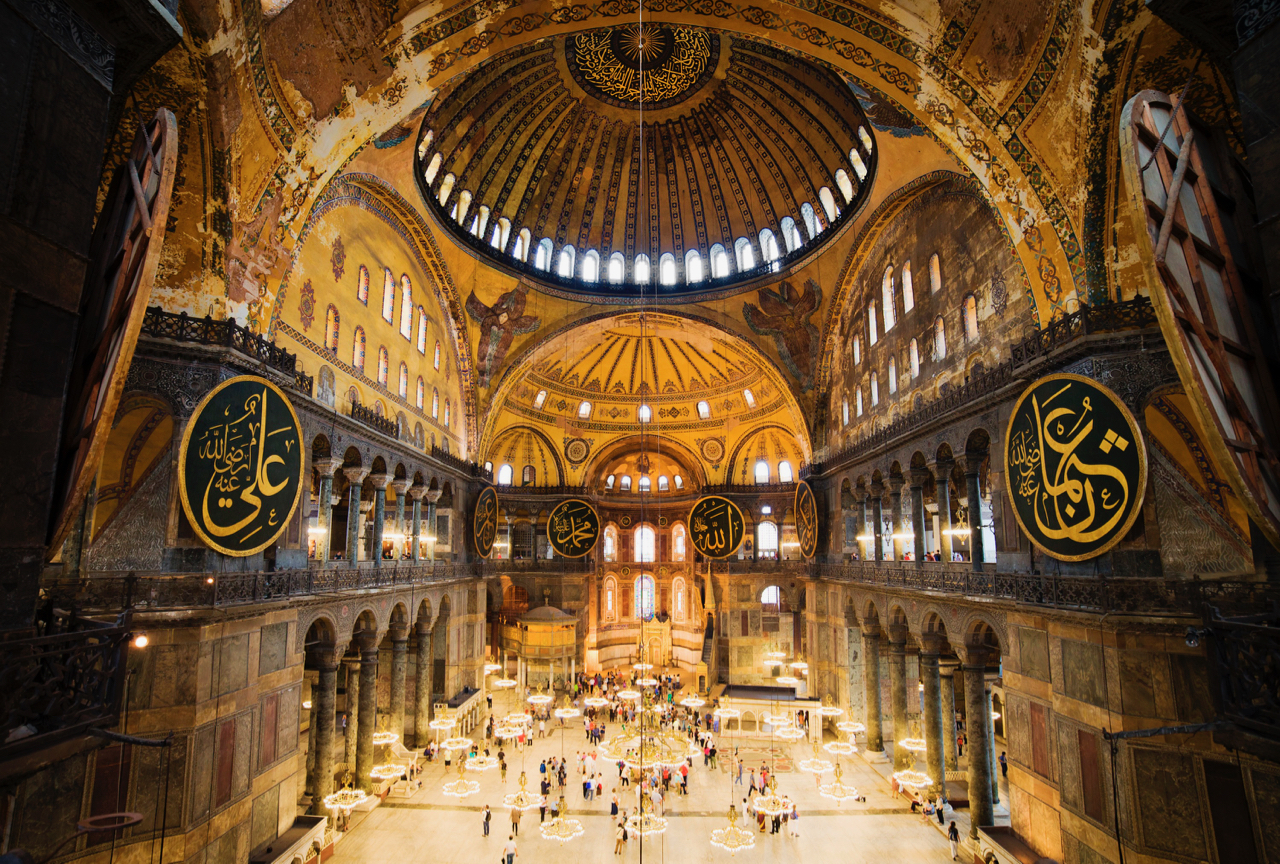 Hagia Sophia, built for Emperor Justinian between 532 and 537, gained renown for its nearly 103-foot diameter dome suspended 182 feet off the floor and flanked by two half domes (Credit: Tourism Turkey)

Just steps away from the cistern, Hagia Sophia has stood the test of time. In 360, Constantine ordered the construction of a wooden Christian church on the site of a pagan temple. The present church, built for Emperor Justinian between 532 and 537, gained renown for its nearly 103-foot diameter dome suspended 182 feet off the floor and flanked by two half domes. Two sixth-century earthquakes damaged it, and a third collapsed the main dome in 558. In reopened in 562 as the Church of Divine Wisdom and seat of the Greek Orthodox patriarch.

When the Ottomans won the city after a 54-day siege in 1453, Mehmet the Conqueror ordered the church converted to a mosque. Byzantine mosaics depicting the Virgin Mary, Jesus, and other Christian figures were whitewashed or plastered. They remained hidden until 1934, when the mosque was transformed into a museum. Since then, to the joy of art critics worldwide, many mosaics have been restored. 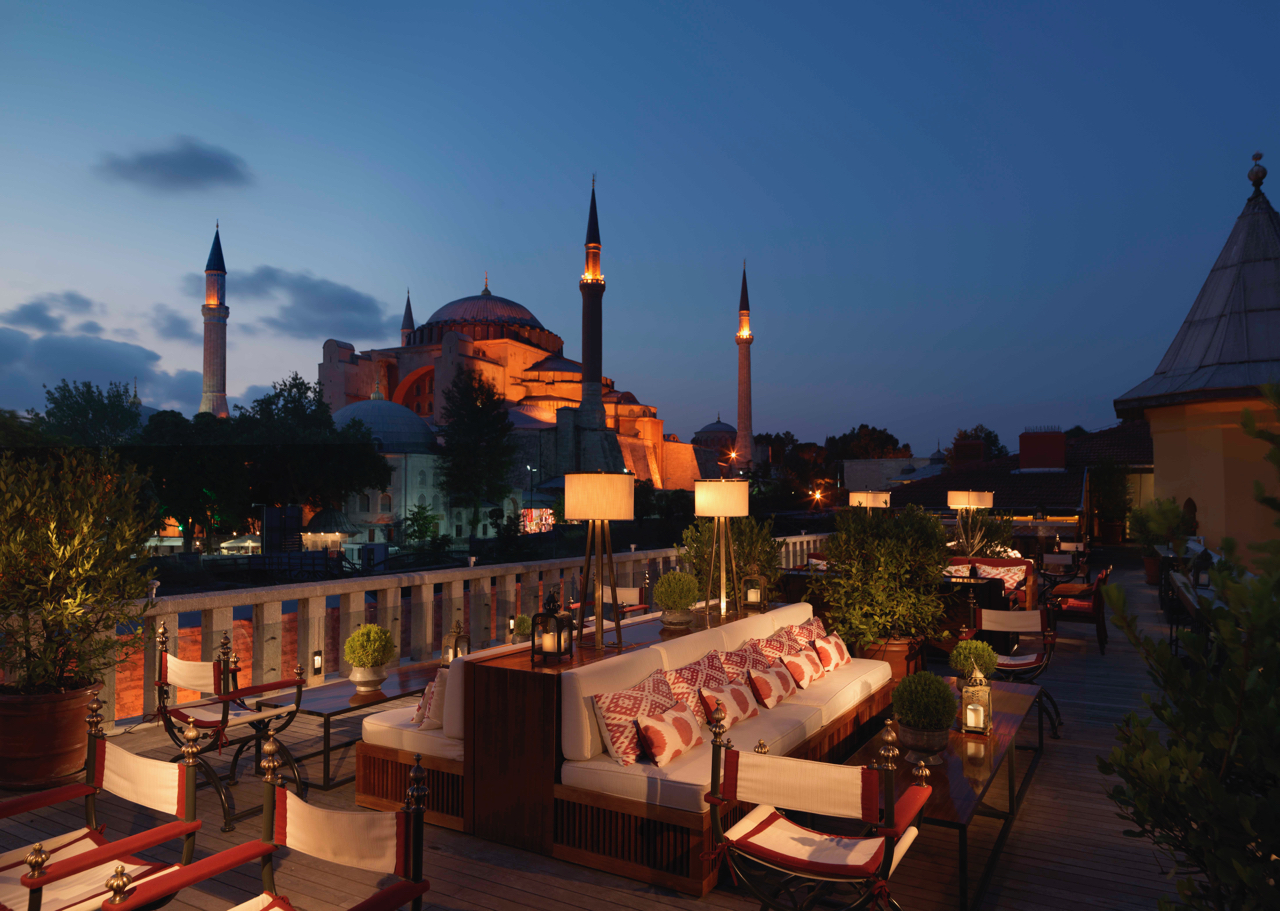 After visiting, walk to the nearby Four Seasons Sultanahmet’s A’YA Rooftop Lounge and revel in the Hagia Sophia view, while reflecting on the experience and sipping afternoon tea.

Constructed beginning in 1460 by Sultan Mehmet II, Istanbul’s Topkapi Palace Museum served as the Ottoman imperial residence, housing the court and haram for 25 sultans and serving as the state’s administrative and educational center for roughly 400 years. 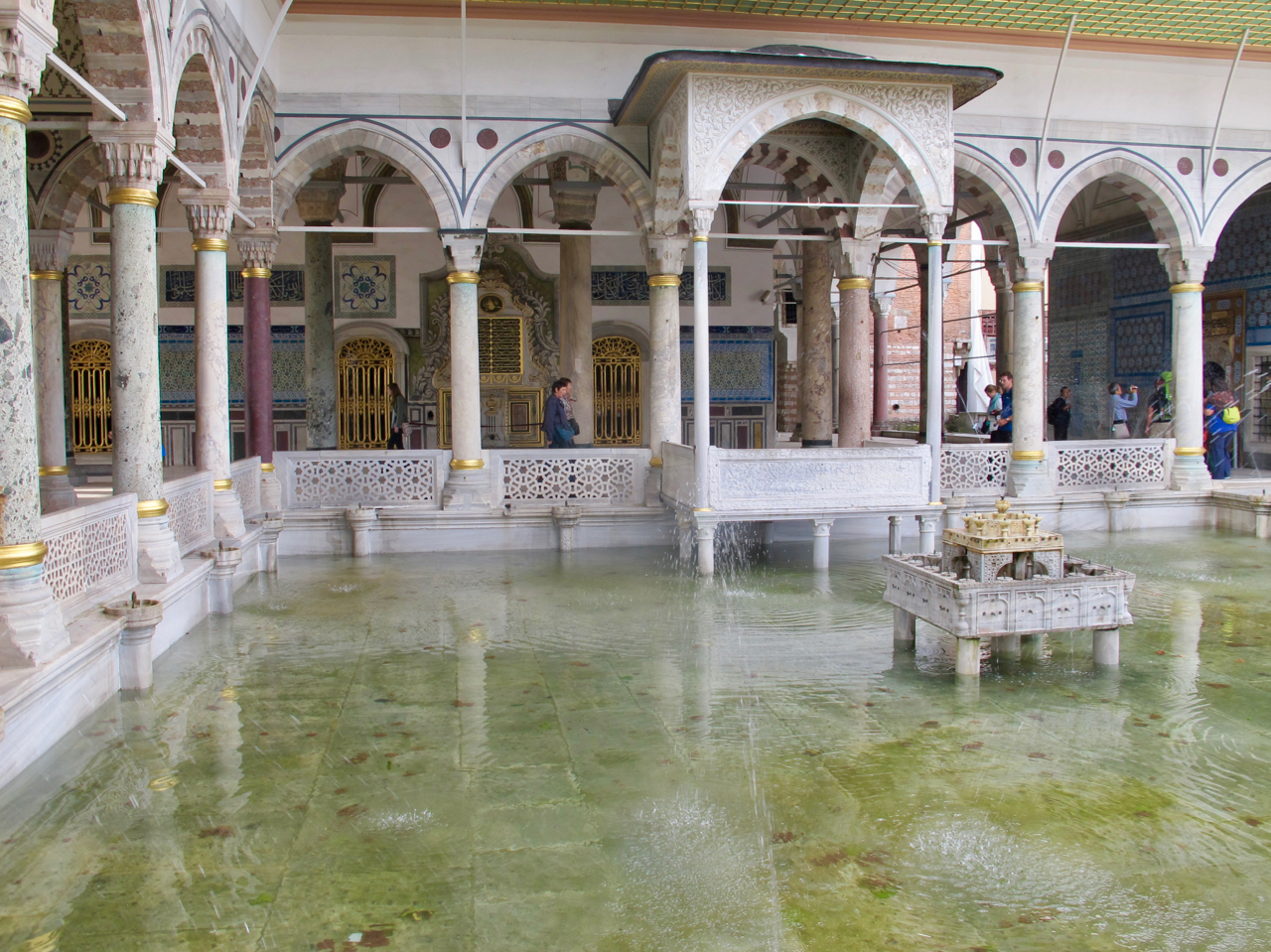 Topkapi Palace is a must when it comes to what to see and do in Istanbul. Credit Hilary Nangle

Topkapi’s over-the-top grandeur reflects its importance. The 173-acre complex boggles the mind and dazzles the eyes; it’s peaceful and chaotic, overwhelming and yet intimate. Visiting is an immersion into the history and politics of the Ottoman Empire on a macro level, and into everyday life, complete with a harem and eunuchs, on the micro level.

One could easily spend the better part of a day exploring the four courtyards and gardens and still not absorb it all: ginormous diamonds, rubies, jade, emeralds, pearls; silver and gold artifacts; Chinese porcelains; magnificent costumes; Islamic holy relics; ornate mosaics and tiles; and other riches are displayed throughout the complex.

Remember, in Istanbul everything is possible, and arranging a private visit here would be a real advantage.

Shop ’til you drop

“Do not take the Covered Bazaar lightly, it is a closed box full of mystery,” wrote 20th-century Turkish poet Orhan Veli Kanik. Mehmet the Conqueror is credited with founding Istanbul’s Grand Bazaar, the world’s oldest shopping center, in 1461. Since then it’s grown to comprise 22 gates accessing 64 streets and lanes and 3,600 (!) shops carrying jewelry, leather, hand-painted ceramics, carpets, spices, antiques, embroidery, and more bling extraordinaire. A guide is indispensible not only in navigating through this warren, but also in finding reputable vendors who carry quality products.

Fuel your shopping expedition with lunch on the rooftop terrace of Restaurant Nar Lokanta (The Pomegranate), which specializes in regional Anatolian fare. It’s sited above the chic Armaggan Nuruosmaniye boutique, which begs at least a looksee, if not a lingering browse. 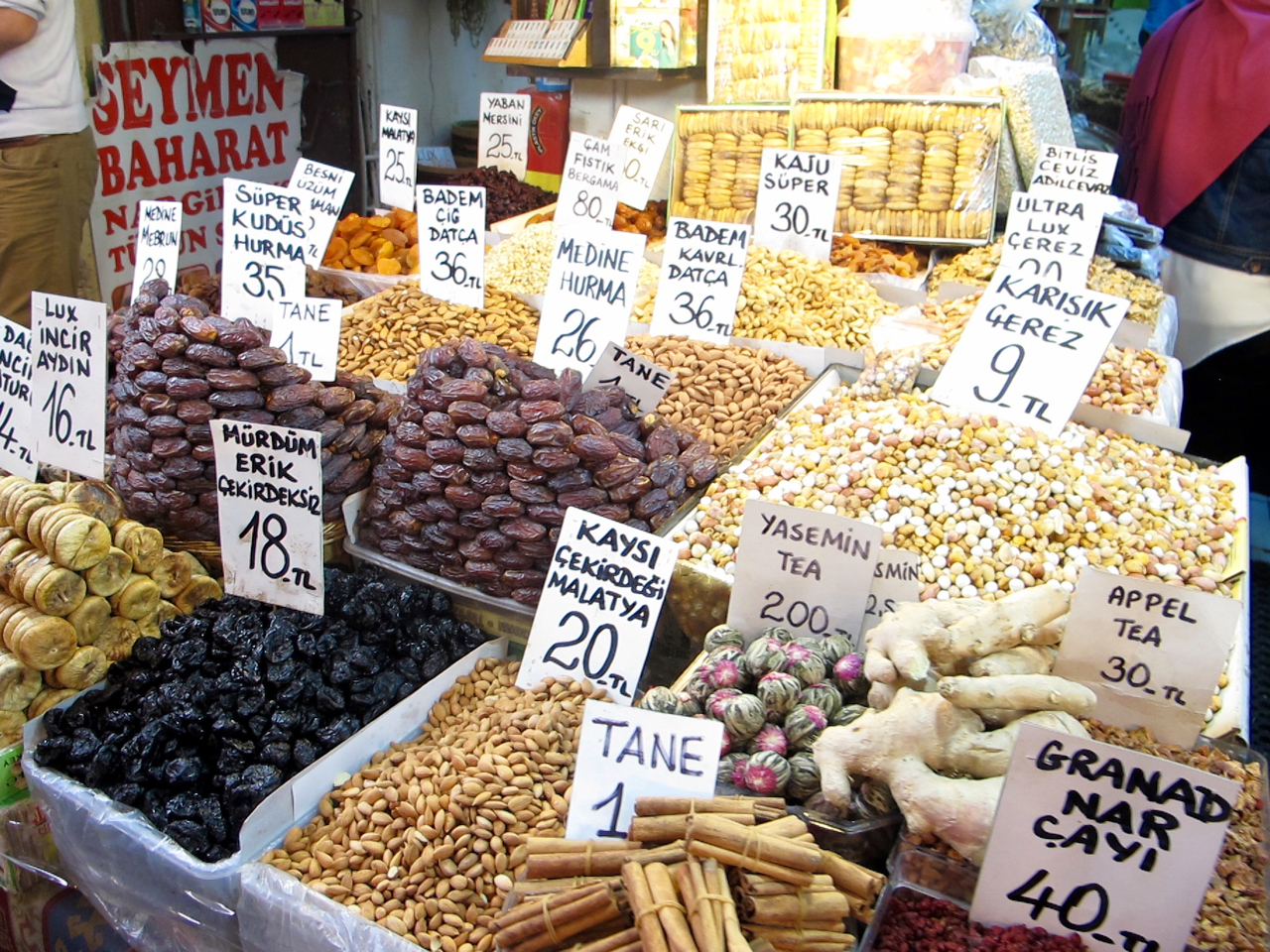 When in Istanbul, “an absolute must-visit is Haci Bekir, in Kadıköy, on Istanbul’s Asian side,” insists Lisa Morrow. The author of Inside Out in Istanbul, Morrow explains that confectioner Haci Bekir established this shop in 1777, and his renown as a maker of Turkish Delights, mouth-watering sweets made from starch, sugar, and flavorings, led Mehmet the Conqueror to appoint him Chief Confectioner to the Palace. At the shop, operated by his descendants, purchase a selection, order a Turkish coffee, and savor both at a table in the back.

From here, it’s an easy stroll to Viktor Levi Şarap Evi, a wine house offering offers traditional Turkish meze. “It’s like being in the dining room of your best friend, who’s serving your favorite tipple while playing all the music you love,” Morrow says

End one day with a sunset dinner at Tugra in the Çırağan Palace, an elegant fine-dining restaurant in a building once inhabited by Ottoman sultans. Request a table on the terrace and feast on Chef Sezai Erdoğan’s updated Turkish and Ottoman fare, crafted from historical recipes, while savoring divine views over the Bosphorus.

If there is an architectural pièce de résistance in Istanbul, it’s the graceful, seemingly gravity-defying Mosque of Süleymaniye commissioned by Süleymaniye the Magnificent and built by Sinan, the empire’s best-known architect. Constructed between 1550 and 1557 during the Ottoman Empire’s peak, the 25-acre complex encompassed the mosque, four schools, public baths, library, hospital, soup kitchen, and medical school.

The mosque’s massive central dome floats twice as high as its diameter, enhancing the overall sensation of weightlessness inside.

“Sinan was a genius who lived in the 1500s and built more than 300 buildings under three Ottoman sultans,” said Cox & Kings guide Levent Evkuran. Among his works are 84 mosques, 48 Turkish baths, and 36 palaces. This mosque, Evkuran continued, is considered Sinan’s architectural response to Hagia Sophia. It echoes the former’s structure but improves upon it significantly, demonstrating Sinan’s genius and skills. The four slender minarets, two shorter ones with two sherefes (balconies) each and two taller ones with three sherefes, honor Süleymaniye as the fourth sultan after the Conquest of Constantinople and the 10th Ottoman sultan.

The mosque’s massive central dome floats twice as high as its diameter, enhancing the overall sensation of weightlessness inside. Massive half domes, arches, marble columns, and four elephant-foot pillars buttress the weight. The design allowed Sinan to pierce it with 138 windows that illuminate the interior and add an ethereal sense of divine light. The rather sparse interior decoration reflects Süleymaniye’s late-life renunciation of luxury in favor of piety.

If you wander into the yard on the Bosphorus side, gaze over the madrassa domes cascading toward the shimmering Golden Horn waters, it’s hard not to be arrested by the view’s mesmerizing magic.

Perhaps rather than conquer Istanbul, one simply needs to submit to it. 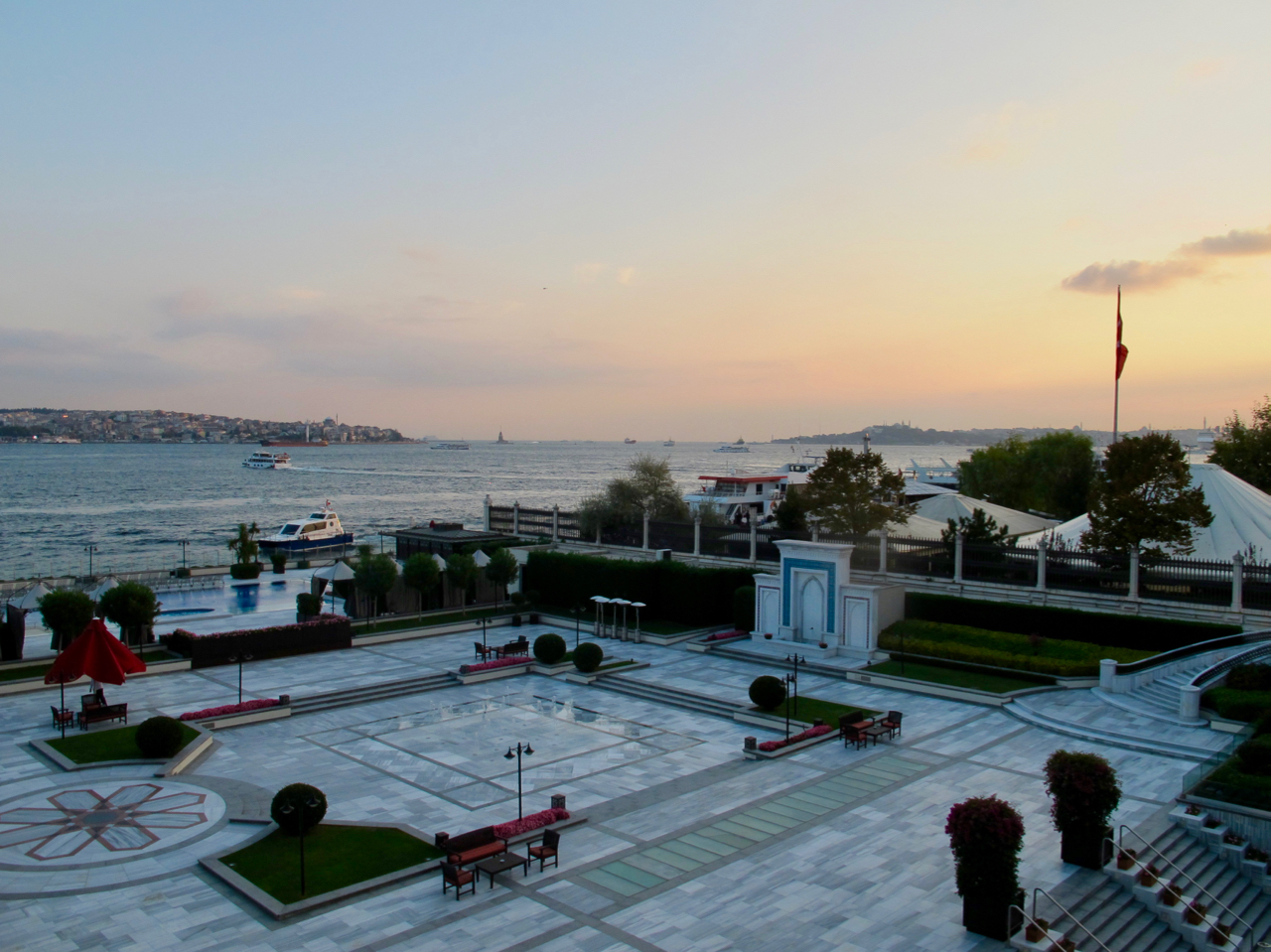 Disclosure: The author’s visit was subsidized by Cox & Kings.

Also on Getting on Travel: