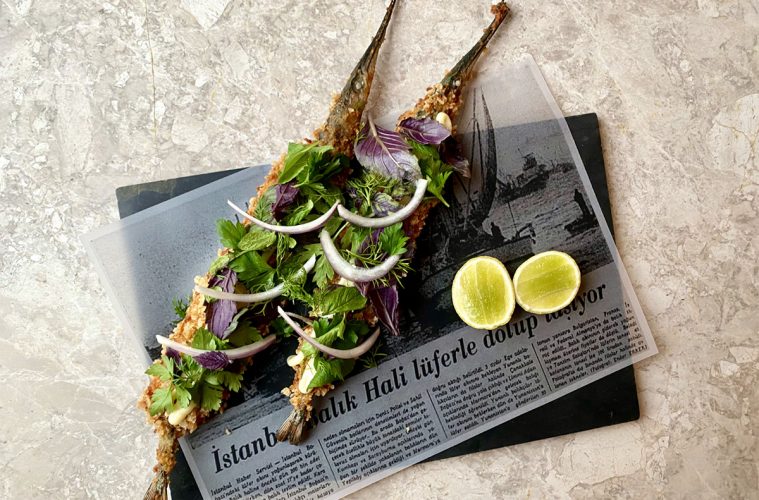 What to Eat in Istanbul: A Food Lover’s Guide

Destinations may brag about melting-pot cuisines, but Istanbul is arguably the best example.

According to guide Eser Sedef, who’s lived in Istanbul for 20 years, the city “shocks and surprises” at every corner. And these surprises extend to the food: “It is not one style, it’s mixed. In Turkiye you can get food from the English, French and Persians, the Syrians, Armenians, Greeks, Romans — everyone can find something from themselves or from their heritage here.”

Over 2,500 years, these recipes and cooking methods were added to the traditional Anatolian cuisine born in Eastern Türkiye. And now, a new generation of Turkish chefs is stepping into a global spotlight with elevated cuisine and professional dining room service.

I’m the latest in a long line of food lovers excited to taste everything on Istanbul’s bountiful table. During a recent trip, I ate at two newly crowned Bib Gourmand establishments. I enjoyed impressive modern Turkish cuisine at Alaf and traditional Turkish at Pandeli, located above the historic Spice Market. 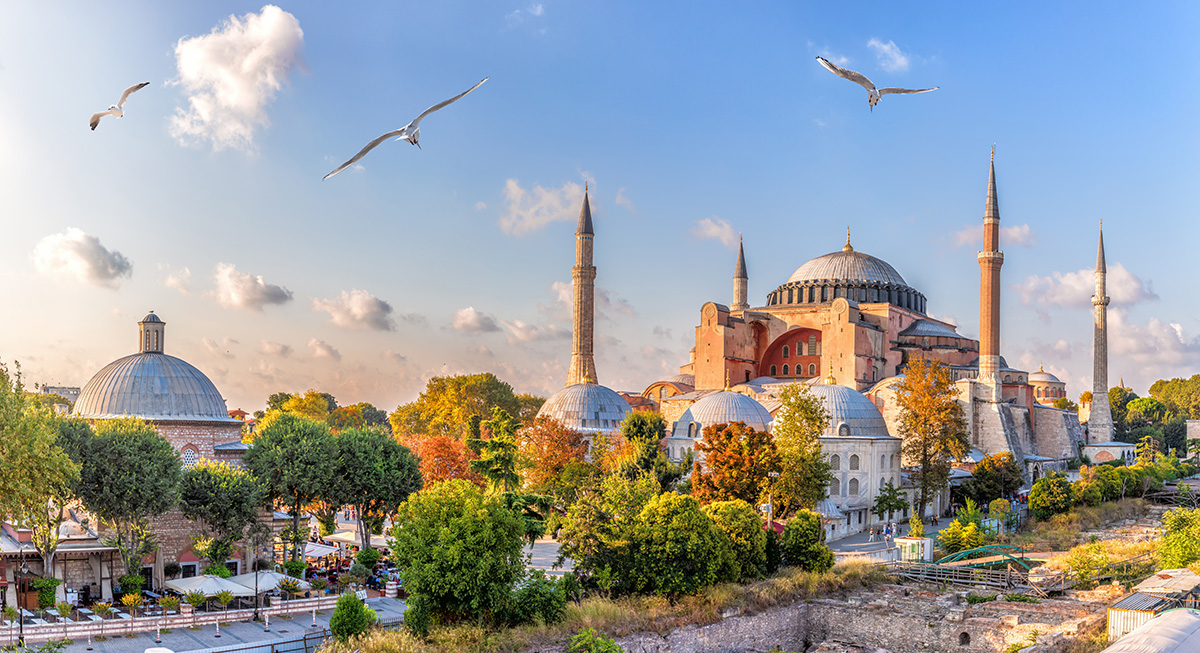 Called Byzantium, then Constantinople, and since 1930, Istanbul, the city has more than 15 million residents. It blends centuries of culture and history with the beat of a vibrant, modern metropolis. A recent tourism marketing campaign exclaims: “Istanbul is the new cool.”

Speaking of names, the country is now officially known as Turkiye — pronounced Tur-key-yay since the English “Turkey” was replaced with its Turkish-language name. So don’t feel bad if you forget to make the switch in conversation when you visit. So did many Turks I spoke with.

Of course, there’s much more to see and do in Istanbul than eat. Explore the city on foot to discover ancient churches with glowing mosaics, the colorful buildings, cafes and boutiques of the former Jewish quarter in Balat St. and the lively street theater of Kadikoy Fish Market across the Bosphorus Strait on Istanbul’s Asian side.

There’s the expansive beauty of Hagia Sophia Grand Mosque, built in the 6th century as a Greek Orthodox church, becoming a mosque with the Ottoman conquest of Constantinople, then a museum and in 2020, a mosque once again.

But during your explorations, allow time to nibble and sip.

What to Eat in Istanbul 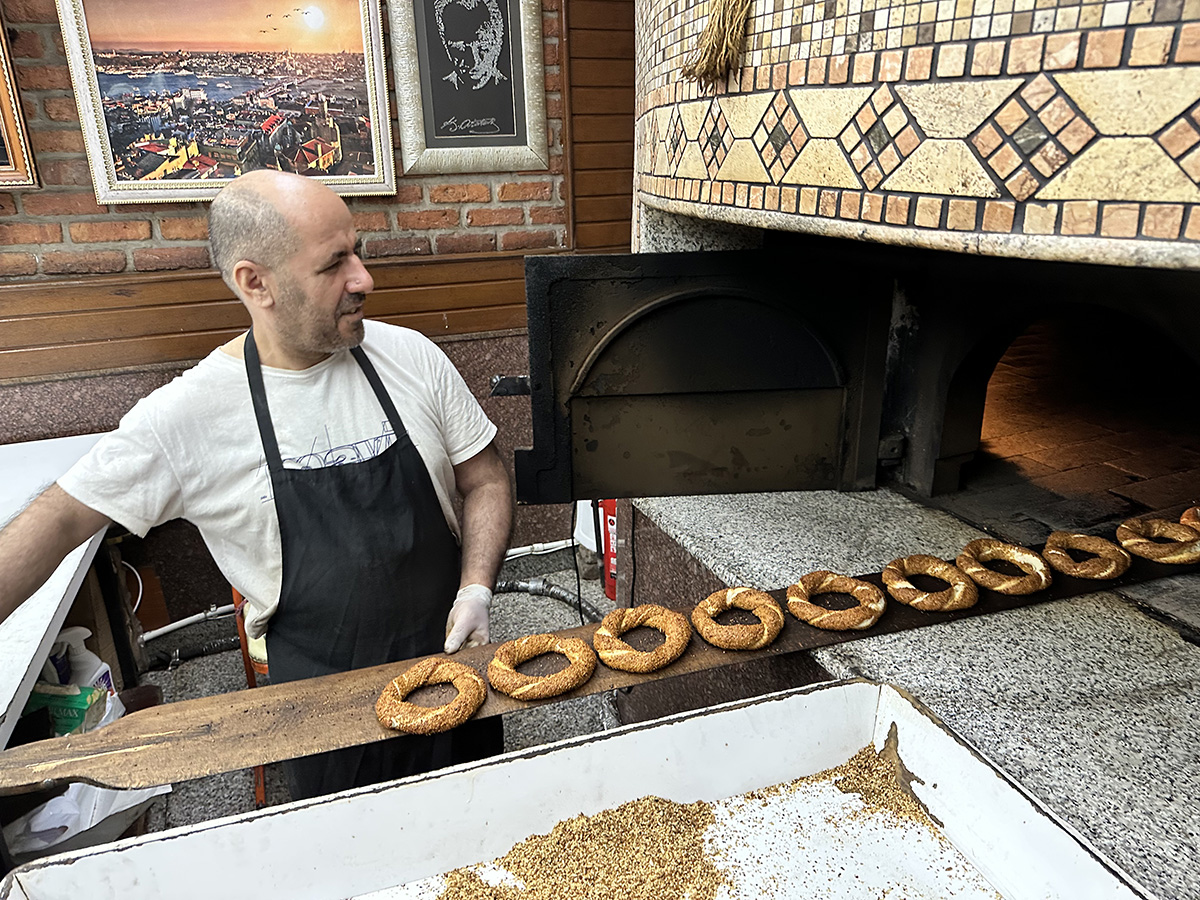 As Istanbul’s offices empty at the end of the day, third-generation simit baker Seref Yildiz heads to work to make the city’s favorite breakfast bread.

From the age of 12, he’s worked at family-run simit bakery Galata Simitcsi on the European side of this historic city, the only one in the world that straddles two continents: Europe and Asia.
Simit, hand-sized, sesame-encrusted bread rings, are a breakfast staple.

Simit cart vendors are in most squares and on street corners. So is it my imagination or a sign of my hunger that Istanbul early mornings seem to have a faint scent of roasted sesame seeds?

Yildiz, whose name means “star” in Turkish, works overnight, making the dough for various sweet and savory breads and pastries. Before the pre-sunrise call to prayer echoes from thousands of mosques across the city, he slides the first of the 3,000 simits sold daily in the tiny bakery into a wood-burning oven.

Visitors tend to categorize simit as a squashed bagel. But it’s different. Unlike a bagel, a simit isn’t boiled before baking, so it’s not chewy. Instead, it’s crispy outside and fluffy inside. It’s also a bit sweet, thanks to a dip in grape molasses to make the thick coating of sesame seeds stick. 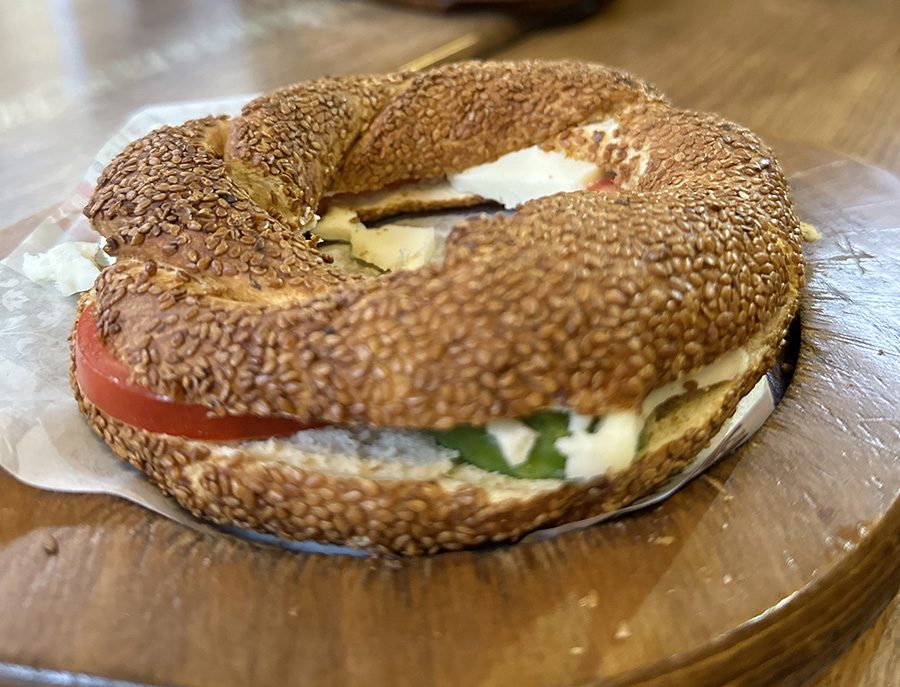 For Turks, it’s not breakfast unless simit is involved. I didn’t get to Galata Simitcsi until 9 a.m. Yet, people were still lining up for takeout or a seat at one of the sidewalk tables outside the bakery.

My still-warm, deep-brown simit was split and stuffed with mild white cheese called beyaz peynir, sliced cucumbers and tomatoes. A glass of well-steeped black tea in a narrow-waisted glass — Turks drink more tea per capita than any other country — made this a typical Turkish breakfast.

A Sunday breakfast is a banquet in Istanbul (as is the daily buffet at The Marmara Pera Hotel, where I stayed). Everything is fresh, seasonal and local. Clay bowls with a half-dozen varieties of olives glistening with oil are next to a feast of cheese: mozzarella-like braids, thick slices of traditional Turkish tulum, golden aged cow’s milk cheese, and slabs of creamy feta-style made with sheep’s milk.

Enjoy a generous example of a traditional breakfast at Perispri Restaurant. This antiques-filled space in a former mineral water storage facility in Balat, is run by glass and ceramic artist and popular local host Cahide Erel.

At lunch and dinner, small dishes of dips, salads and other delicious appetizers, called meze, cover the table. Good luck to the server hoping to find room for the impressively puffed pita round studded with sesame seeds, still hot from a wood-burning oven. 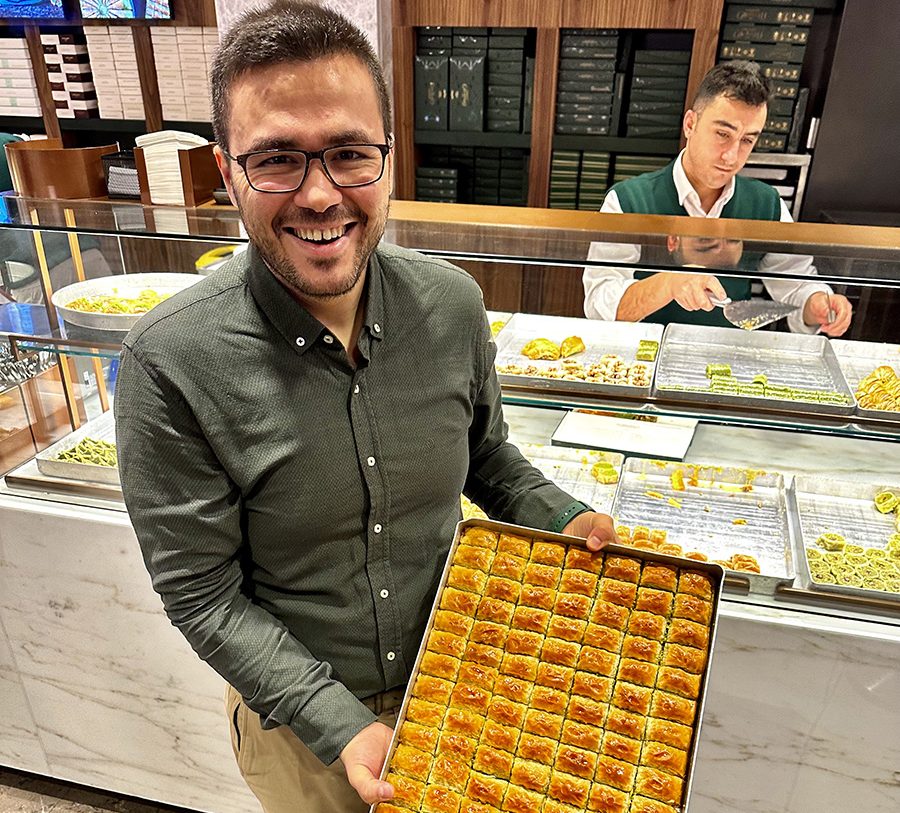 Be sure to indulge some of these favorites when exploring Istanbul.

Unlike the Greek version, it’s slightly crispy, and while sweet, it doesn’t ooze honey or syrup. Coarsely chopped, vibrant green pistachios fill the most popular varieties. And the best place to sample these delights is at the Karakoy Gulluoglu baklava factory shop. 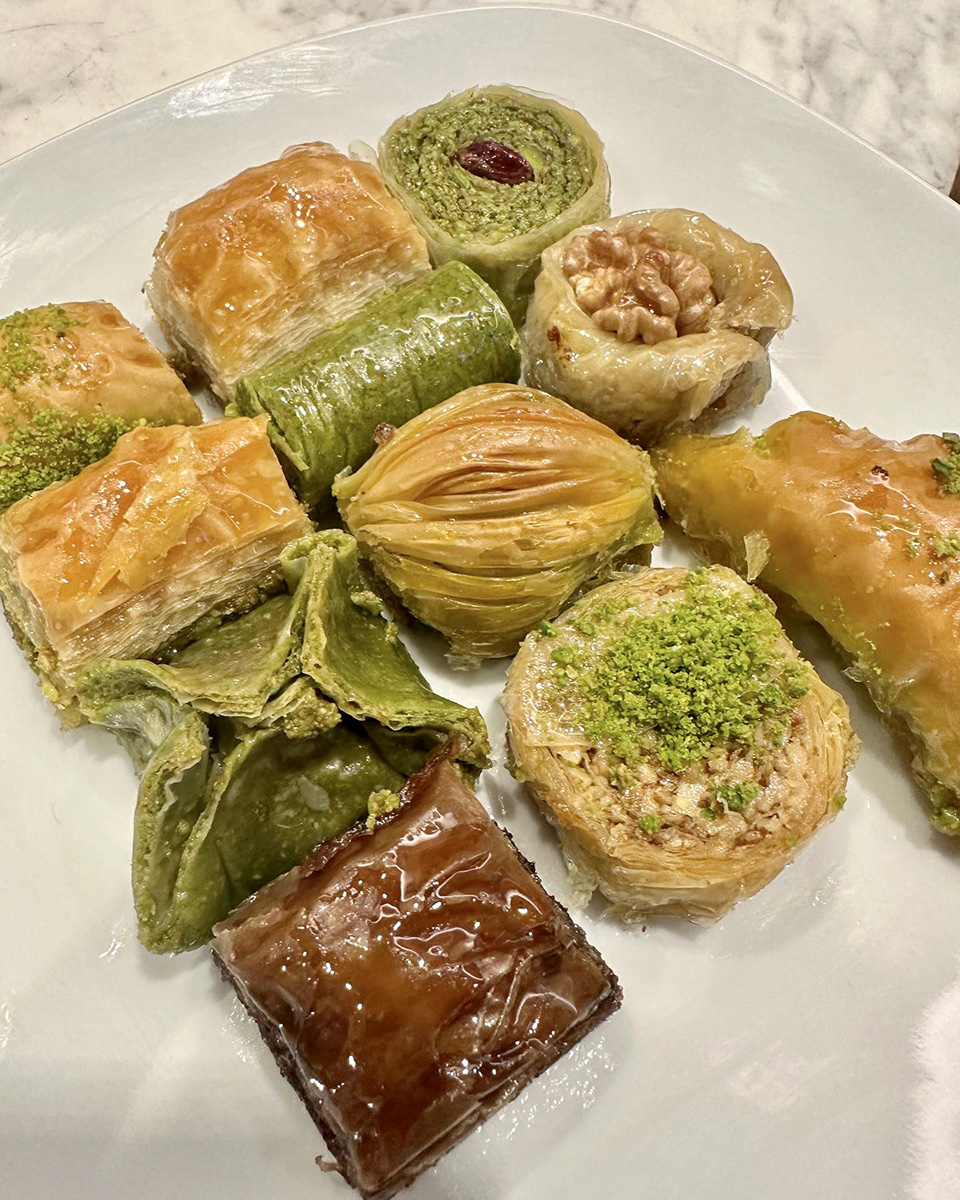 The family-run business has been making baklava since 1843. General manager Murat Gullu is the sixth generation to take the reins. First, he let us watch master bakers roll and stretch the lengths of dough to the read-through stage by hand. Next, the dough is layered with fillings and topped with sheep-milk ghee, baked low and slow and finished with beet sugar syrup that bubbles up and then cools in the pans.

We ate a dozen varieties of baklava in the spacious café. I loved the domed ones called midye (mussels) with fresh pistachios and clotted cream inside. The long takeout counter packs baklava for travel.

You can also pick up boxes of Karakoy Gulluoglu baklava in the impressive Old Bazaar shopping center in the massive new Istanbul Airport, which opened in 2019. 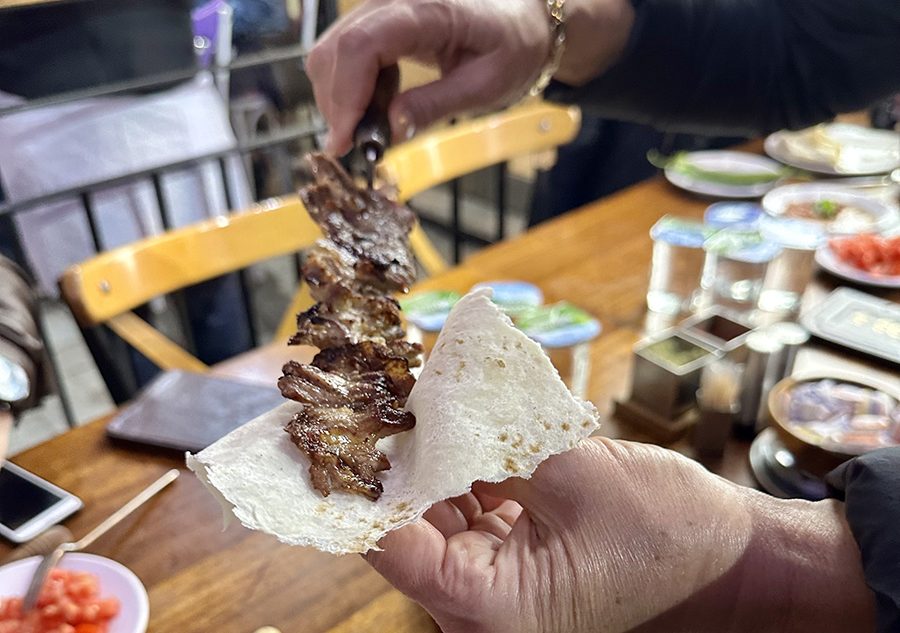 The scent of lamb cag kebab turning over hot coals on a horizontal spit is irresistible. The cook runs a skewer just under the exterior and cuts the succulent meat away.

We stood around a low outdoor table and pushed the crispy-salty meat on to thin slices of pita bread. Delicious. Boat-shaped pide filled with melted cheese, vegetables and meats and small rounds of lahmacun covered with a thin layer of minced lamb, minced garlic and tomatoes are Turkiye’s delicious version of pizza. 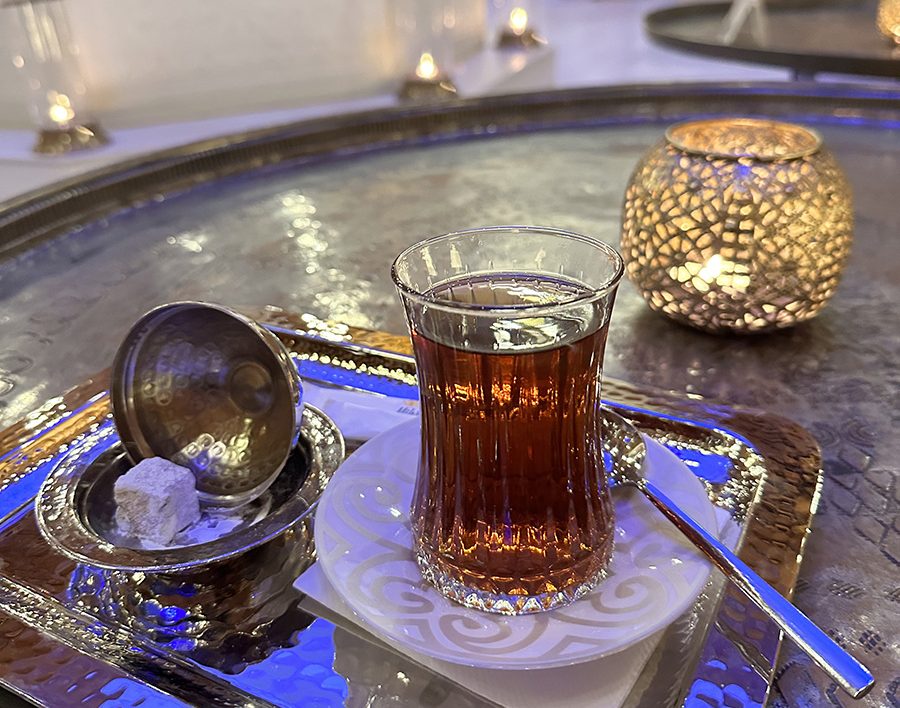 Called lokum, this isn’t the cloying, rosewater-flavored pink stuff you may have come across before and vowed to never try again. These delightful sweets were an Ottoman favorite and are still very popular in Istanbul.

Lokum shops display a staggering variety of jewel-tone cubes and rounds. Freshness is key. The 17th-century Egyptian Bazaar, also known as the Spice Bazaar, is a good place to find the freshest lokum. HazerBaba has a vast selection, including some of the newest varieties. I loved the ones wrapped in a soft candy skin made from tart tangerine.

For true indulgence, I’ll never forget the fresh squares of walnut lokum served with tea as I relaxed after my bath and massage at the Ayasofya Hurrem Sultan Hamam, the opulent bathhouse built for Roxelana, the wife of Sultan Suleiman the Magnificent next to Hagia Sophia Grand Mosque.

Respected by the Ottomans for their hunting skills and a favorite animal of the prophet Muhammed, Istanbul’s huge population of street cats rule the roost. They’re clean and well cared for, and you’ll see feeding stations and little houses for them all over the city.

I noticed one cat stretched out in the doorway of a large store on a busy shopping street. People stepped over or around the sleepy white kitty and the security guard gave it an indulgent smile. Nobody shooed it off for keeping the double sliding doors open.

In Hagia Sophia Grand Mosque, a visitor from South Africa sitting on a low step said she had no intention of moving the napping cat nestled in her lap. The tabby wandered into the mosque, hopped up and went to sleep, just like a cat is said to have done with Muhammad, who cut the sleeve off his robe rather than disturb the feline. 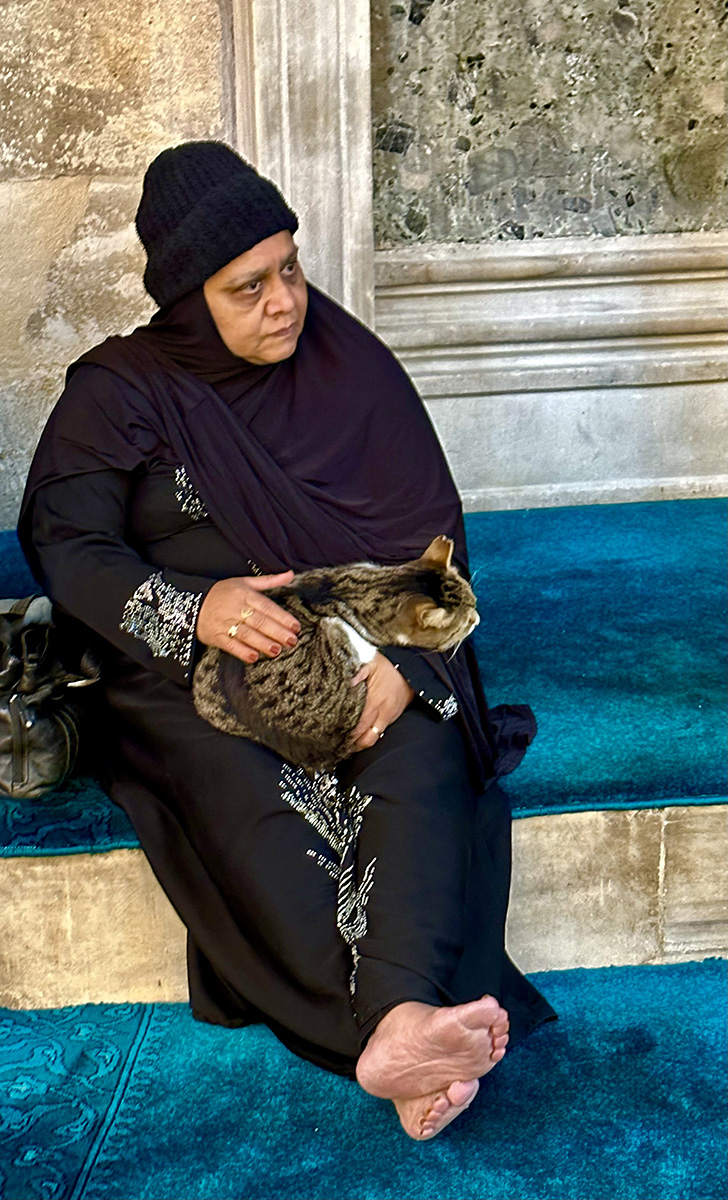 woman with cat at Hagia Sophia

Disclosure: Linda Barnard was a guest of the Turkish Tourism Agency, which did not preview this story.

What to See and Do in Istanbul

There is Another Side to Istanbul Apart from Old Constantinople 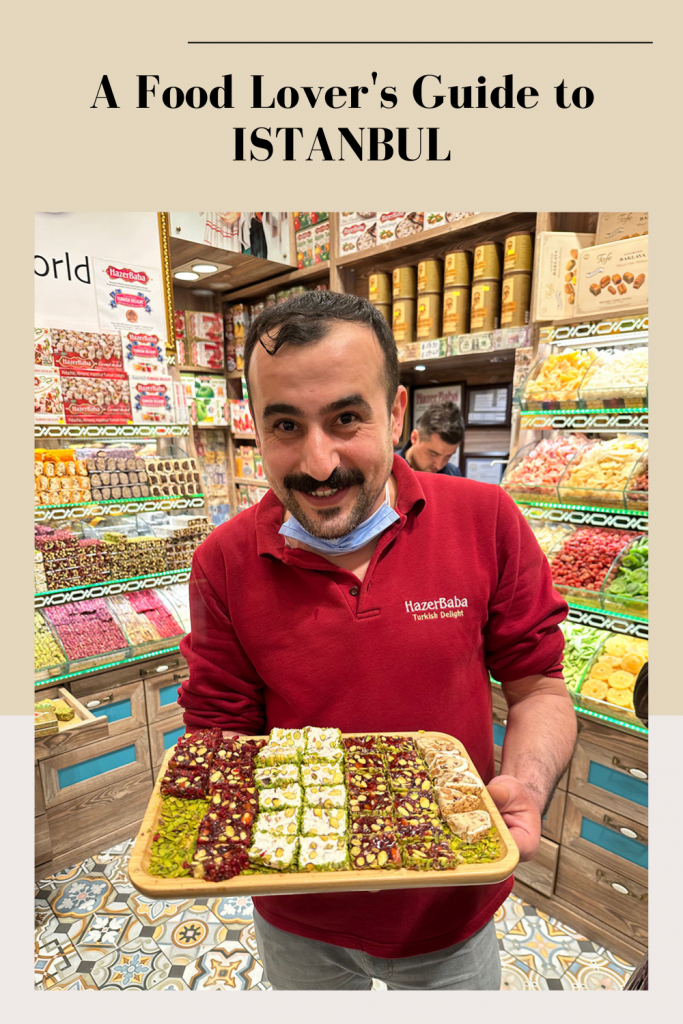