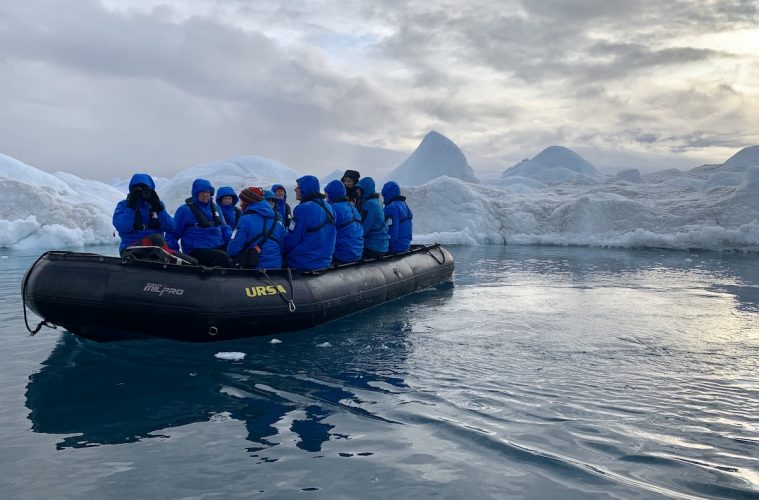 Explore Greenland Aboard An Expedition Cruise

Dark, heavy clouds have a chokehold on the sky over the Ilulissat Icefield and millions of bobbing bits of ancient ice. Perched on the edge of a Zodiac, feet planted firmly on the floor for balance, we plow slowly, silently and gratefully through the watery landscape off the western coast of Greenland.

A gloomy cloud cover is nothing to endure, not when it comes with 35-degree air, light winds and only a hint of ocean swell instead of the pounding rain or fierce chop that could have derailed this experience. And not when it forces us to admire nature in shades of black and white, without the distraction of colour. 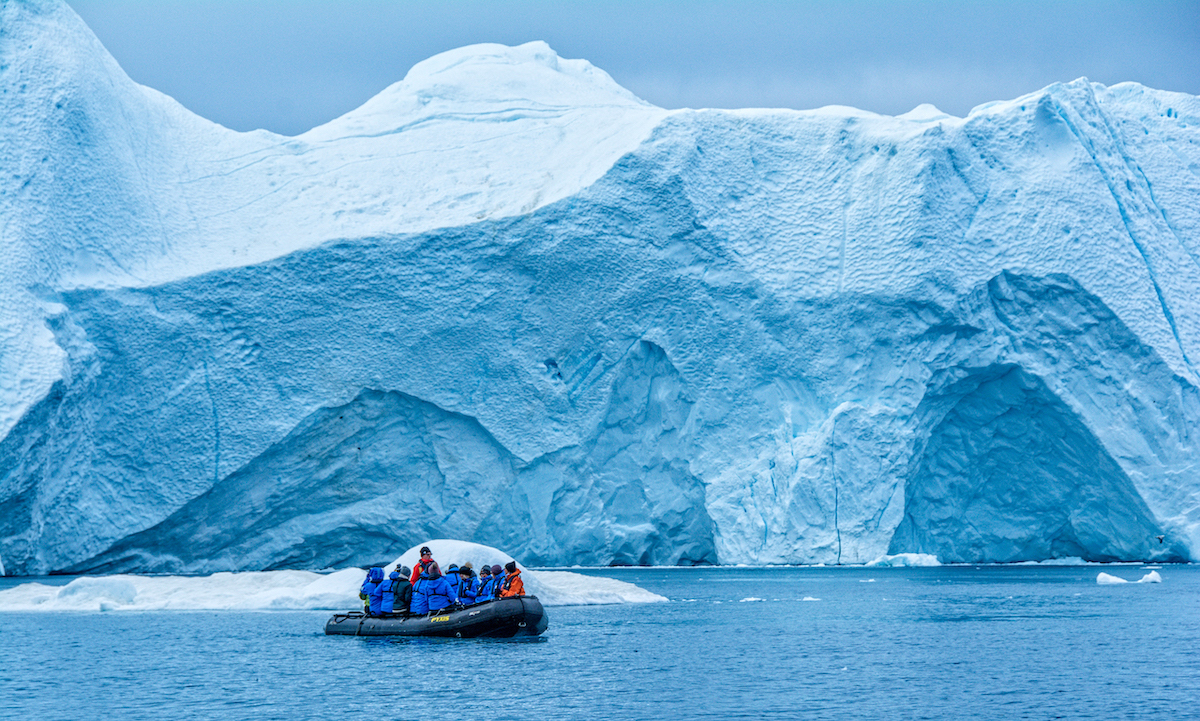 Arctic explorer Jerry Kobalenko steers us towards what seems like a mundane iceberg. “Here you are, grappling with a sense of scale. You can’t figure out if you’re an hour from something or 10 minutes,” he correctly observes. “But hey — this one is not that close and it’s not that small.” It’s the size of a shopping centre, but we quickly realize that all icebergs are astonishing.

Just north of the Arctic Circle, the Greenland icecap reaches the sea at the Ilulissat Icefjord via the Sermeq Kujalleq glacier. The otherworldly icefjord — a long, narrow and deep body of water created by glaciers and filled with ice that has “calved” off from a glacier — is an UNESCO World Heritage Site.

We have come here with Adventure Canada on an expedition cruise. We will savour several precious hours in the icefield, marveling at the sizes, shapes, textures and colours of icebergs, even those with unsightly brown patches from picking up mud, sand and soil when they were close to land.

A low-hanging, orange-rimmed sun bursts through the clouds as the bottom quarter of a rainbow pokes out from a dark cloud and vanishes in the sea — a fitting end to our magical time among icebergs.

“Did you know there are species of icebergs?” Kobalenko asks. “This is a lumpberg. This is a loafberg — I love the texture and purity. There’s a glowberg that looks like it has twinkle lights on it. We’ve just seen a filthberg and that’s a caveberg we’re coming up to. I think cavebergs have the highest status — and rubblebergs and filthbergs have the lowest.” 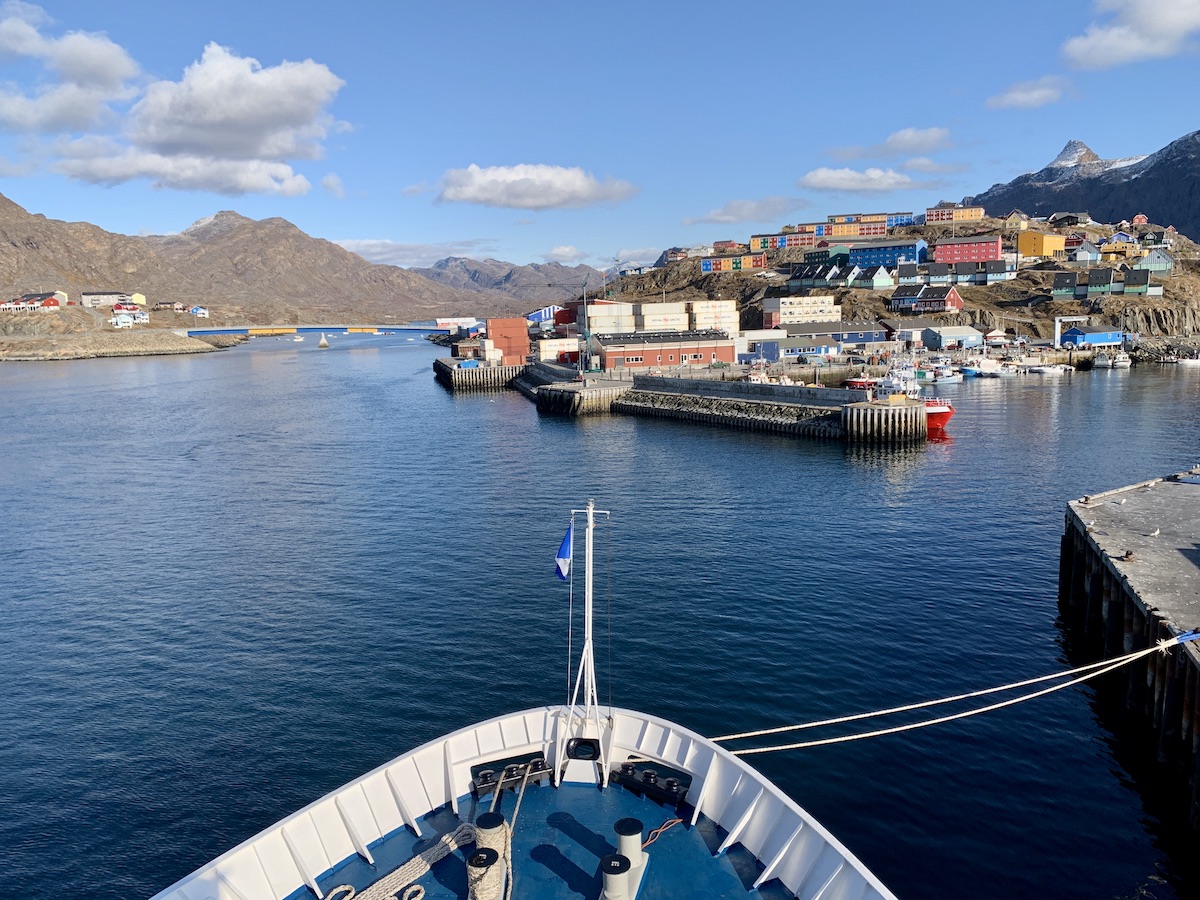 The plan is to now explore the town of Ilulissat, home to 4,900 people, 6,000 sled dogs and a shrimp and halibut fishery. But, the glacier has just calved and a giant iceberg is blocking the entrance to the community. So, we won’t be visiting the museum that honours polar explorer Knud Rasmussen. Instead, we will go hiking and see sled dog pups in Ilimanaq (population 53), and then check out Sisimiut, population 5,600. 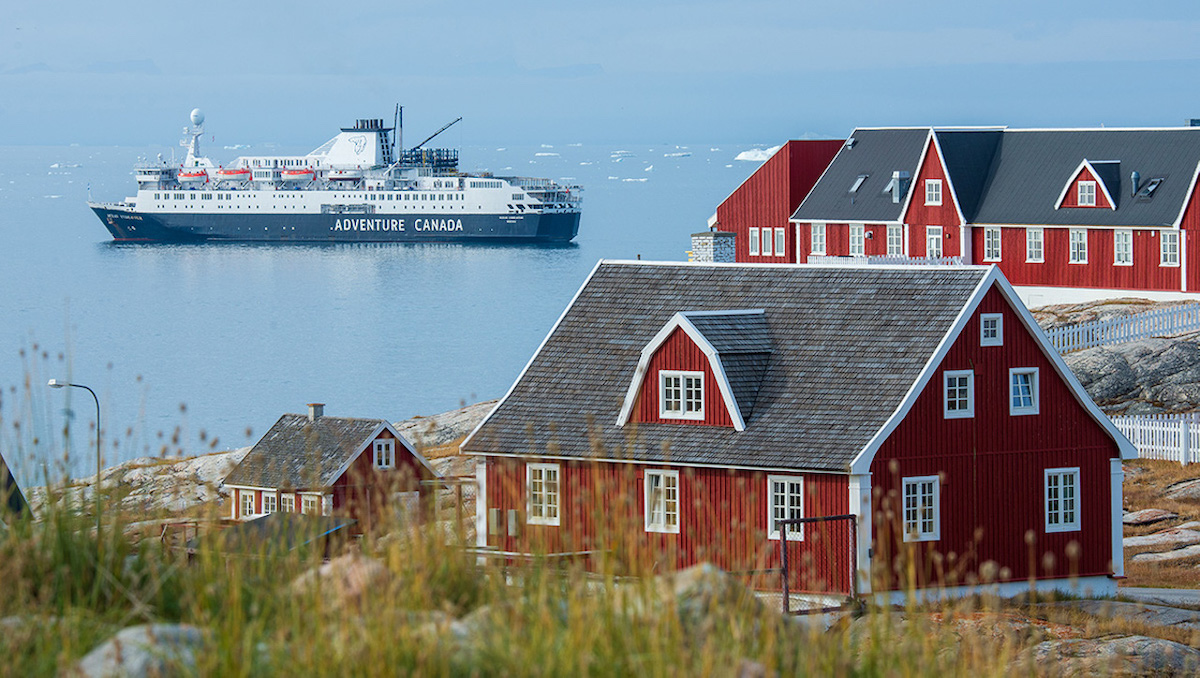 Greenland is a mystery to many. Northeast of Canada and west of Iceland, the world’s largest island is 79 per cent covered by ice. Since no roads connect 60 settlements, travel is by boat or plane. This autonomous Danish territory uses the Danish Krone and its people — 88 per cent Inuit and 12 per cent Danish — speak Danish and Greenlandic.

There are day trips out of Reykjavik, but my two visits are by ship. My 2018 and 2019 trips either start or end in Kangerlussuaq, Greenland’s flight hub and a former U.S. Air Force base. It’s here that I see my first musk ox and photograph the airport signpost showing that New York is just a four-hour flight away. 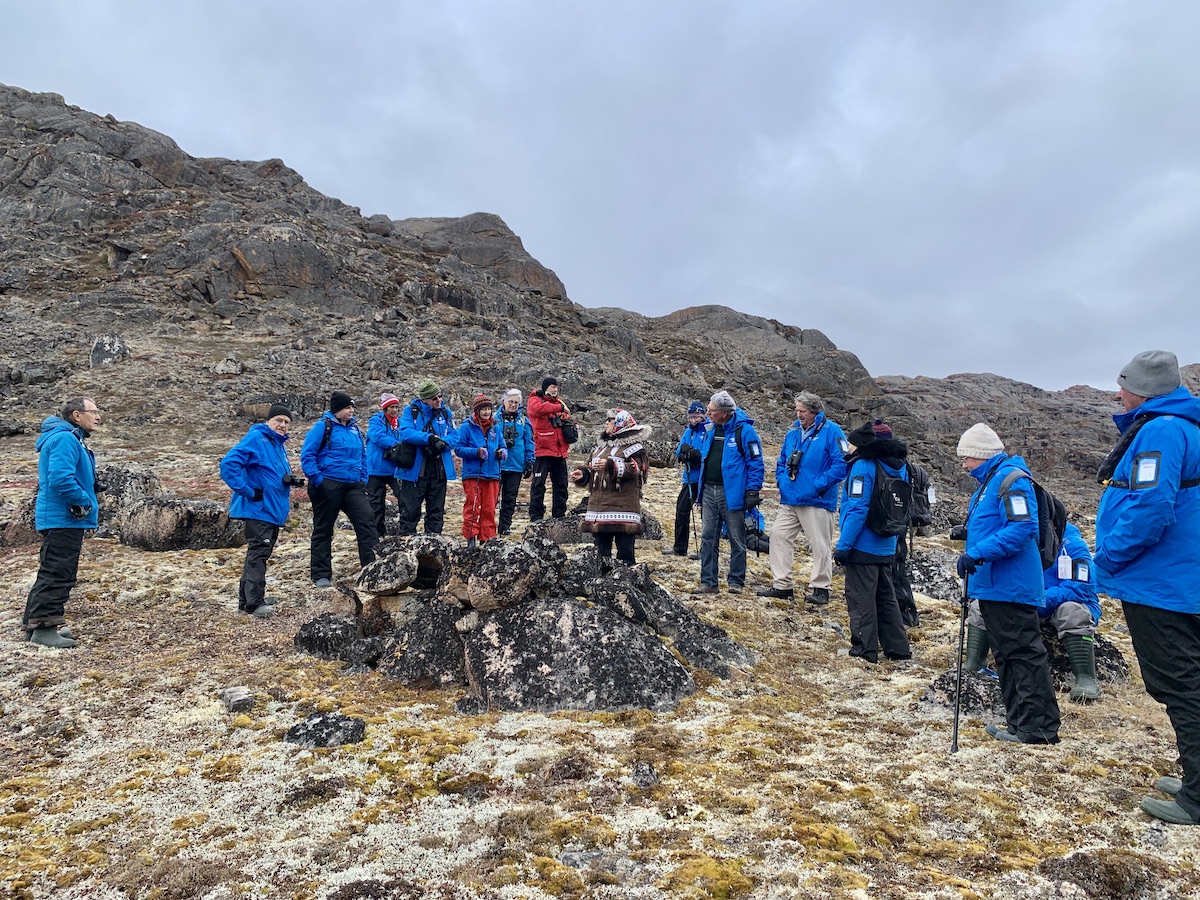 Learning about a Thule meat cache on the tundra (credit:Jennifer Bain)

I lie on the damp, spongy tundra in Itelleq Fjord, see Thule sod houses in Tasiusaq and travel in front of the Evighedsfjord glacier by Zodiac. I watch a seal flensing and drum dance in the village of Kangaamiut, and stroll through Nuuk, the colourful and stylish capital.

With 17,500 people, tiny Nuuk is the world’s northernmost capital. The Greenland National Museum houses the famous Qilakitsoq mummies (500-year-old mummies found in a cave in 1972), honours the Paleo-Inuit, Norse and Thule people that first settled this land, and explains why seal, walrus and whale are so important. 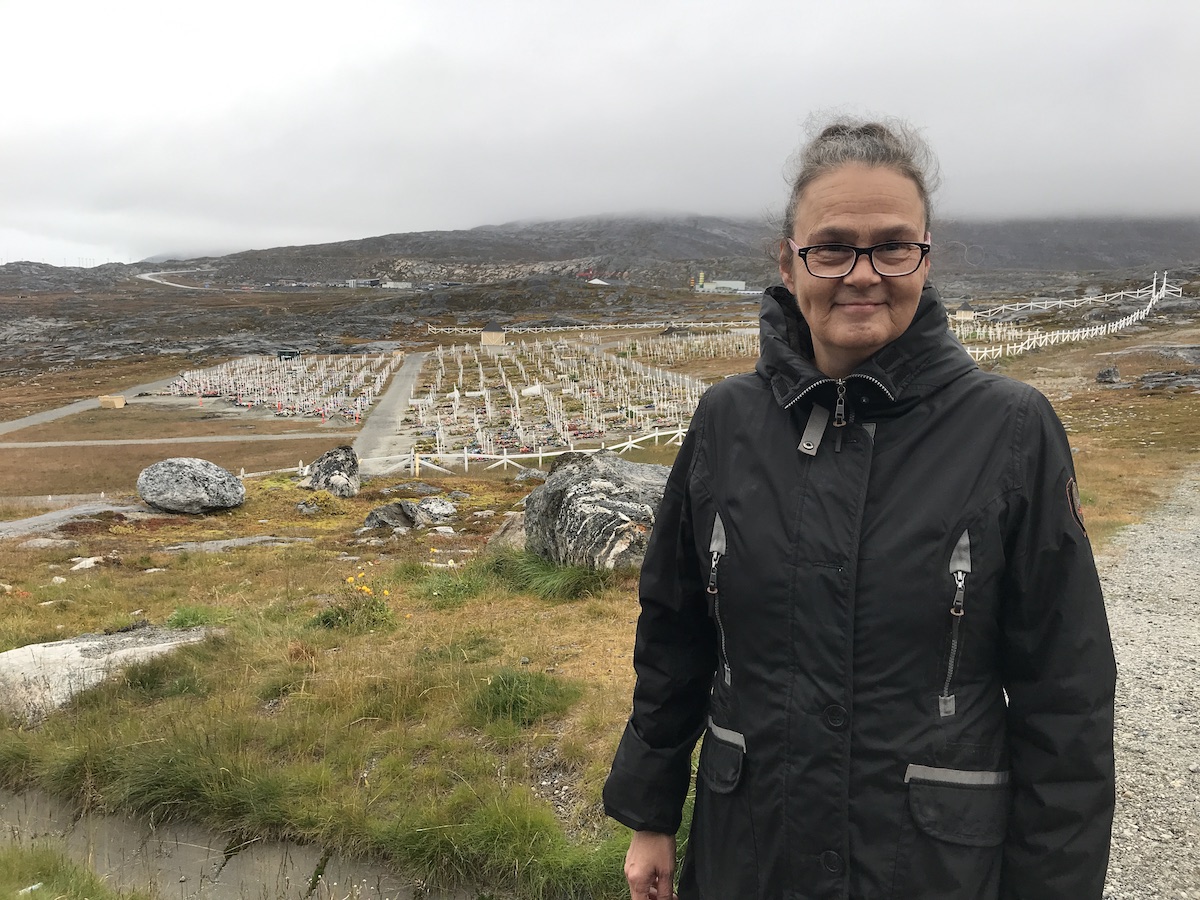 Two women stand out from my Greenland travels — one human, one mythical, both in Nuuk.

Gitte Johnsen Lynge leads a bus tour, detailing how everything from cemeteries and Christmas to golf and the Coca Cola factory work. Married and in her 60s, it’s still Lynge’s job to hunt and fish for her extended family’s freezers. She sends me to the best shop for a tupilaq, a slender, fist-sized figurine carved from caribou antler. These grotesque figures were once made by shamans and thrown in the sea in a ritual to kill enemies. 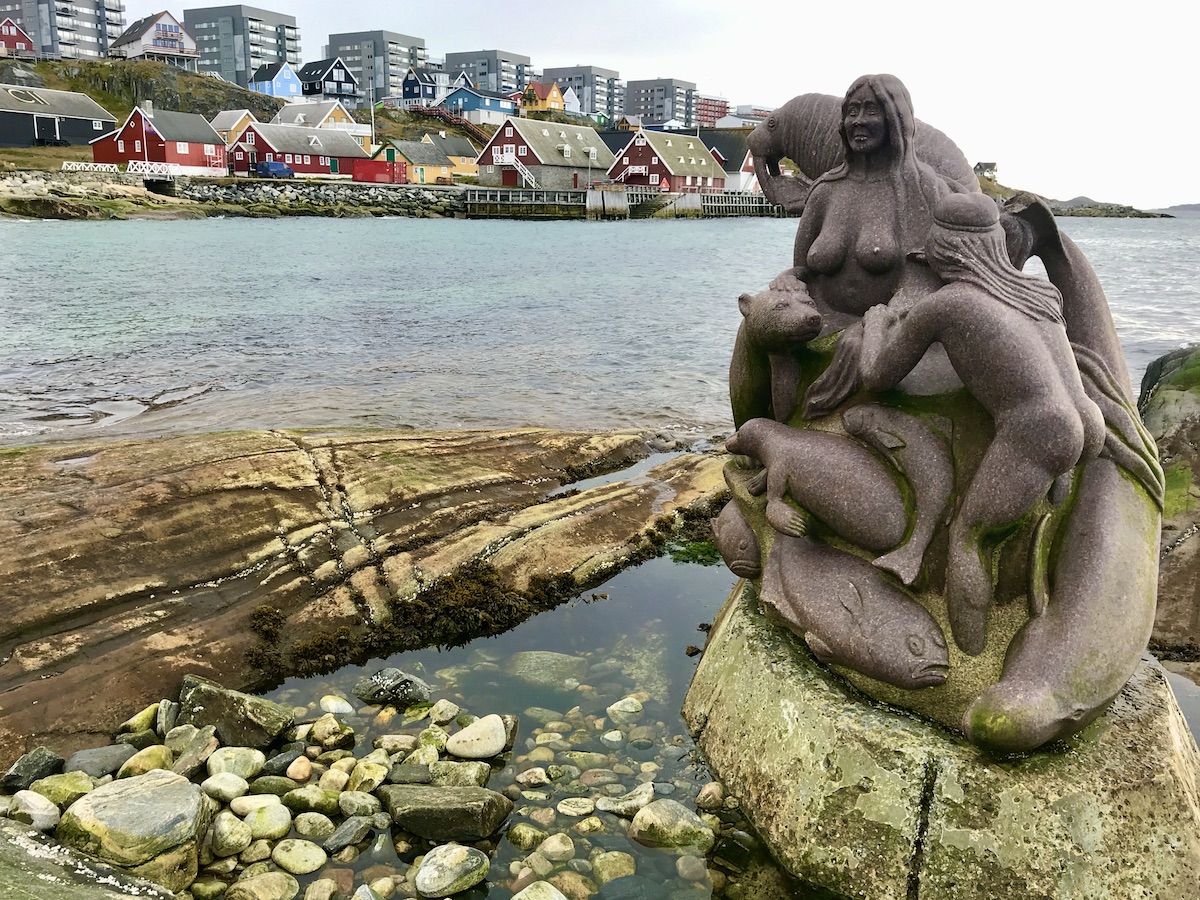 The Mother of the Sea statue in the colonial harbour at Nuuk (credit:Jennifer Bain)

Beneath the souvenir shop in the colonial harbour is the statue of the goddess of the sea and marine animals. Known as Sassuma Arnaa, Sedna and other names in Inuit mythology, she is imagined here by artist Christian Rosing as The Mother of The Sea. When humans misbehave, the creatures they need to hunt and fish get tangled in her hair and a shaman must comb the hair and release the animals to prevent starvation. 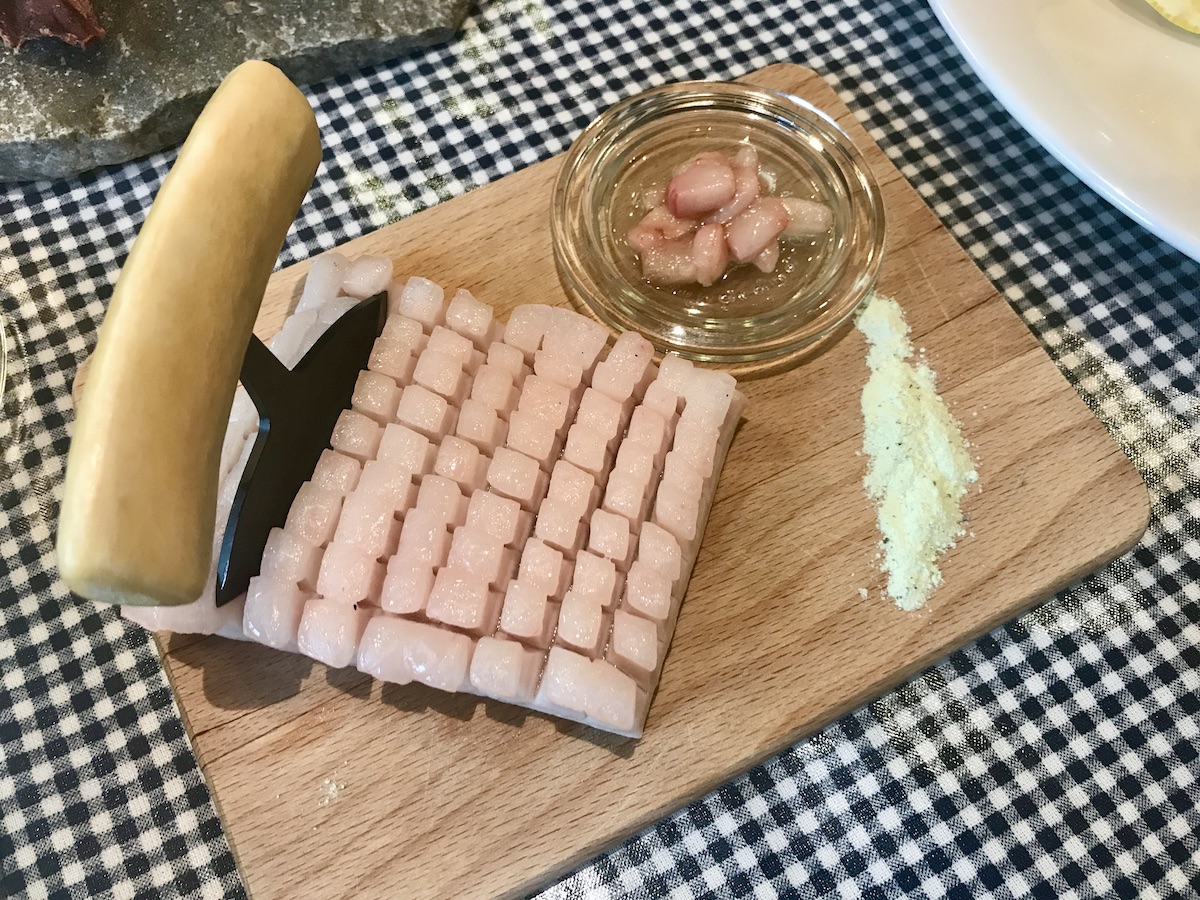 Greenlandic country food at a gastropub in Nuuk (credit:Jennifer Bain)

I think of the goddess during my food explorations. At a gastropub, I sample whale skin and blubber, seal soup and reindeer Bolognese. At the café in the Katuaq Cultural Centre, I nibble on the Hot Sled Dog, a musk ox hot dog. Supermarkets, bakeries and coffee shops offer a window into daily life.

It’s always the simplest things that resonate. I will go back to Greenland just to eat another spandauer — custard-filled Danish pastries with a squiggle of powdered sugar icing that remind me of the careful, zig-zagging path we took in that Zodiac ride among icebergs. 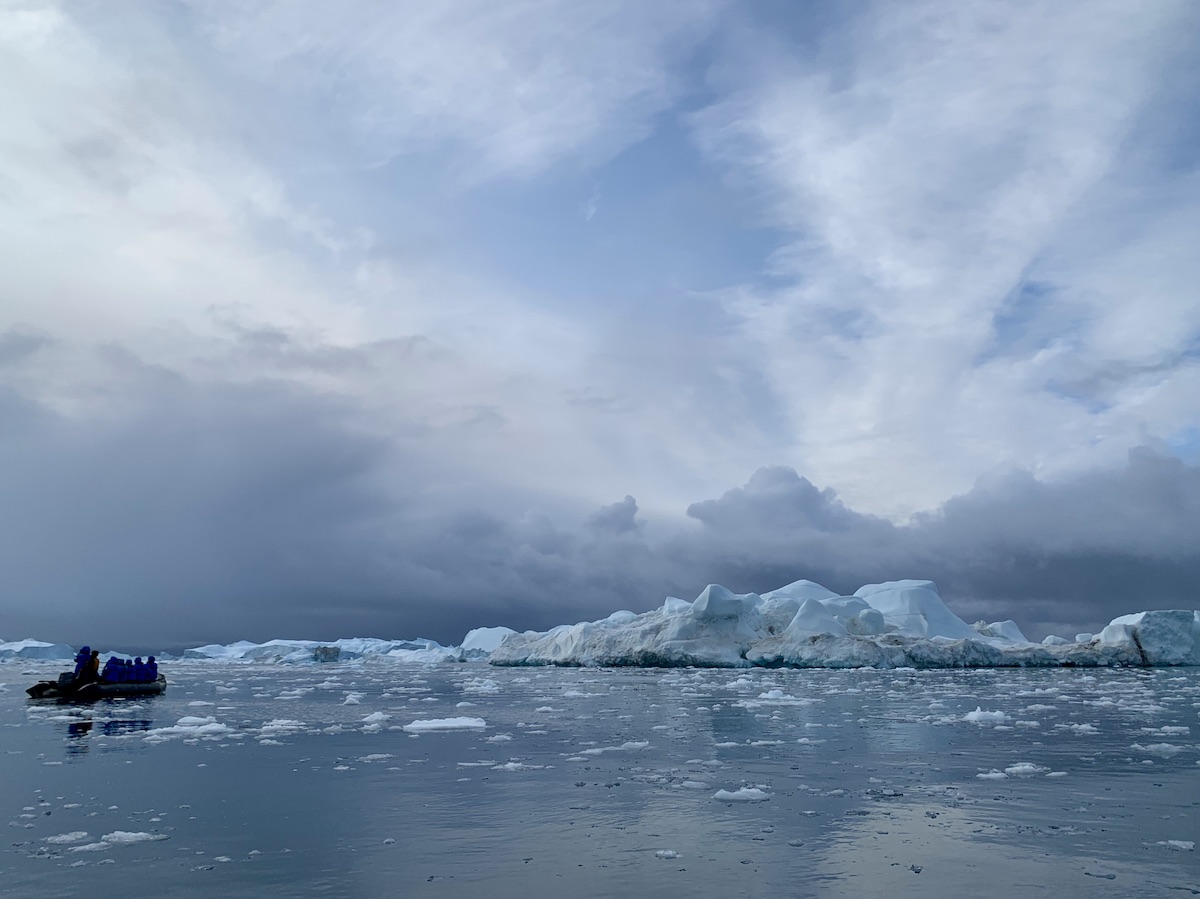 Boating around an iceberg in the Ilulissat Icefield (credit: Jennifer Bain)

Note: During these uncertain times, check out the Adventure Canada website for COVID-19 health and safety updates and cancellation policies.

Photo credits: All photos by Jenifer Bain unless otherwise credited. 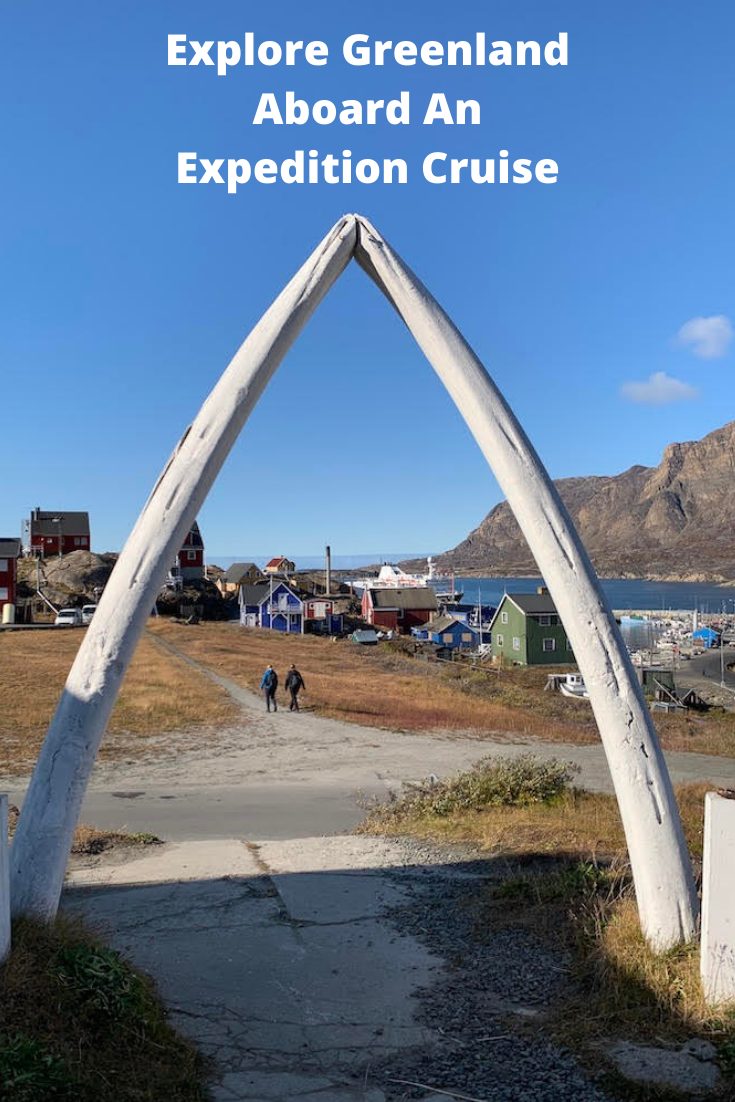