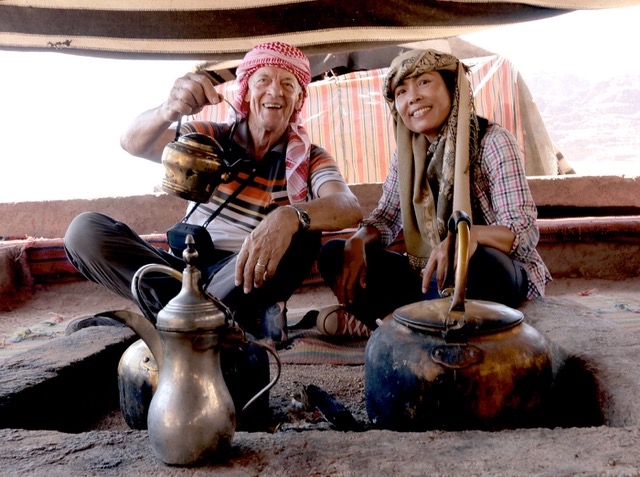 Bedouins, Lawrence of Arabia, moonscape, desert and stunning rock formations were what attracted me to Wadi Rum in the south of Jordan. It sounded romantic, and I imagined it would be a real adventure; then I discovered that the only way to see it properly was to camp.

Now I’ve got nothing against camping in general, and I have some good memories of camping by the beach and in the bush many years ago, but the thought of being on a flat, sandy desert in a sand storm with few facilities was not so appealing.

This is the unforgiving desert where Lawrence lived and much of Lawrence of Arabia was filmed. If you know a little history, you will remember that Lawrence joined the British Army and was posted to Cairo. In 1916, he joined the Hashemite forces and in 1917 began his exploits, including blowing up the German-built railway several times before leading the daring foray across the desert with the cry: “To Aqaba!” 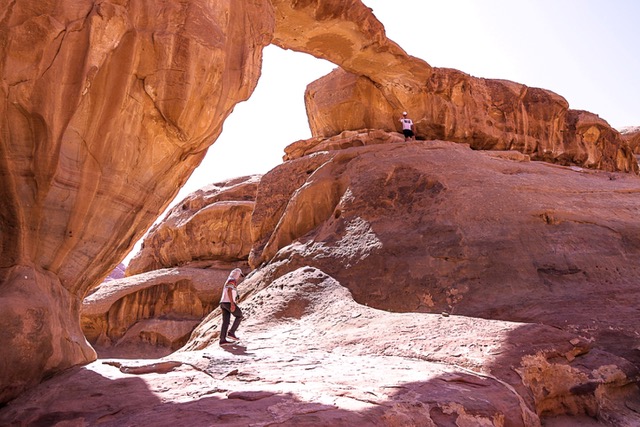 The Rock Bridge of Wadi Rum is characteristic of the desert scenery in this protected, Bedouin area.

Wadi Rum was declared a protected area in 1998. The Bedouins who live here were, until recently, nomadic, but today they have branched into eco-tourism.

My wife and I arrived in this amazing area of Jordan, after about a two-hour trip from Petra. Petra had been spectacular, but now we were in an area, which looked like a bare moonscape. It was not exactly what I was expecting.

We transferred to an old, battered, four-wheel drive pick-up and sat in the back with our sparse luggage.

Dramatic sandstone and basalt mountains were jutting out of the sandy floor as we approached the Visitors Centre. Our driver told us this was as far as he could go, and that he would meet us again the following afternoon.

We transferred to an old, battered, four-wheel drive pick-up and sat in the back with our sparse luggage. We were soon off, bouncing along a dusty road, which rapidly disappeared, and then we were following the tracks of a previous vehicle across a sandy wasteland. Within a few minutes we were bogged. Fortunately, the driver was able to back out of it, but ten minutes later we were bogged again. It was not looking very hopeful.

Glamping in the desert 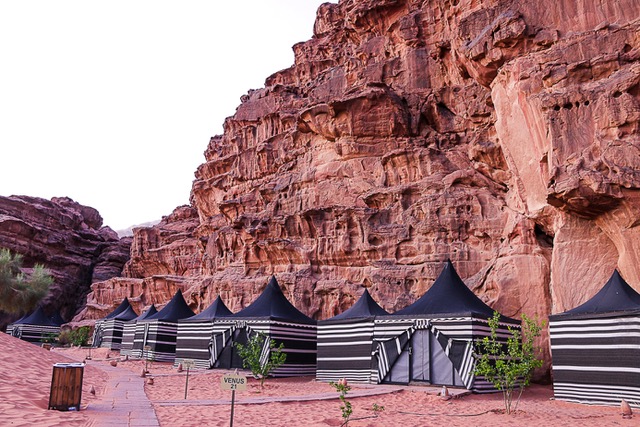 Glamping in the desert of Jordan’s Wadi Rum.

We looked around. Lone vehicle tracks crisscrossed the sand. There was no sign of life and the tracks didn’t seem to lead anywhere. Our vehicle was moving again, and 20 minutes later our camp came into view. We were hot, dusty and sore, but the sight of the camp raised my spirits. Arriving improved my spirits even more, as we were ushered into the air-conditioned tent that served as a reception area.

We had selected this camp more or less at random, but we now realized it was far from ordinary. A young Bedouin showed us to out tent. It was luxurious, air-conditioned and had a fully operational bathroom. We couldn’t believe our eyes.

We had selected this camp more or less at random, but we now realized it was far from ordinary.

After washing, we walked away from the camp into the amazingly quiet surrounds, putting a sand dune between us and the camp. It felt as if we were hundreds of kilometers from anyone. The desert and surrounding rock faces lit up into different hues of orange and pinks as the sun went down over the rolling landscape.

That evening we ate racks of succulent lamb, vegetables and salads prepared by expert cooks and delicious flatbread made from paper-thin rounds of dough cooked on an upturned pan over a fire. After dinner, we sat around an open-air fire that threw moving shadows across the sand while a billion stars looked down. 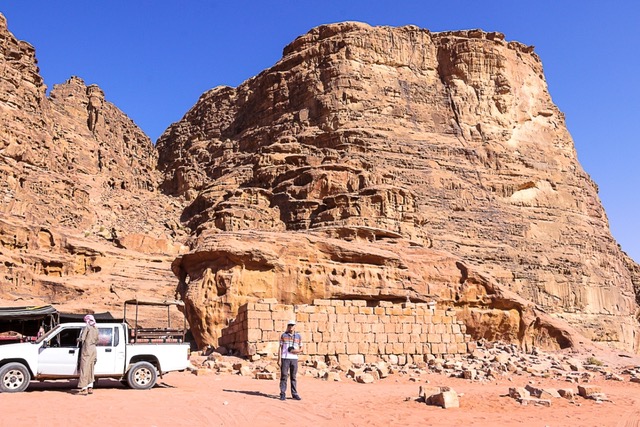 Lawrence of Arabia’s house is one of the sights visited during a tour by pickup truck of Wadi Rum, Jordan.

Next morning, we headed out in another 4 x 4 pick-up to explore the area. Sandstone walls and endless sand dunes created a magnificent picture. The further we went, the more beautiful it became.

Our driver told us to rap on the truck’s roof whenever we wanted to stop for a photograph, and we ended up with very sore knuckles as the environment unfolded. The endless stunning rock formations, fascinating rock art, magical canyons and rich red sand dunes combined to create a unique and fascinating experience.

This is the unforgiving desert where Lawrence lived and much of Lawrence of Arabia was filmed.

Our first stop was at a couple of crumbling walls said to have been the house where Lawrence of Arabia lived during the Arab revolt of World War 1. There are images of Lawrence’s face carved on the rock, though some look more like Peter O’Toole. An enterprising Bedouin had set up a tent close by selling souvenirs, but he was nowhere in sight.

Next it was to the famous Rock Bridge of Wadi Rum. This is the photograph that everyone wants to get and my wife obliged by climbing to the top. At Khazali Canyon, we discovered the deep narrow fissure in the mountainside contains many Nabatean, Greek, and Talmudic inscriptions dating back to the 4th century BC.

A major highlight was spectacular Burrah Canyon, which we walked through in around an hour. The surroundings provided wonderful photo opportunities framed by dramatic rock formations, and if our vehicle wasn’t waiting for us the other end, we probably would have stayed all day. 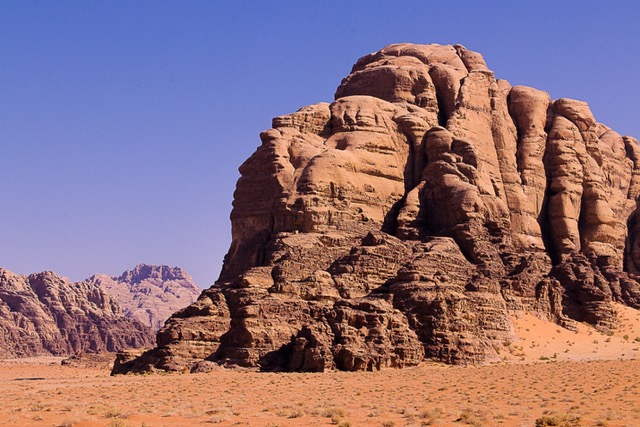 The Seven Pillars of Wisdom, a land formation in Jordan’s Wadi Rum, was named after the book by T.E. Lawrence.

Feasting on views and food

Moving on, we arrived at some huge red dunes soaring towards the sky. We jumped out and struggled up a dune, our feet sinking into the soft sand, to gaze out across the vast desert shimmering in the heat.

We walked through the sand to a nearby Bedouin tent, where we sipped on sweet and spicy tea. The two young men inside offered to show us how to wind a scarf around our heads Bedouin-style. Then one offered us a camel ride.

We wandered across the desert towards a lone tree, where our vehicle and driver were camped. To our surprise, the driver had prepared a hot meal, and we sat on the ground enjoying our location in the shade. Camel trains passed in the distance, and surrounded by the endless expanse of sand and the spectacular mountains, it was easy to feel the lure of the desert and the romance of the Bedouin lifestyle.

Disclosure: The author paid for this trip. 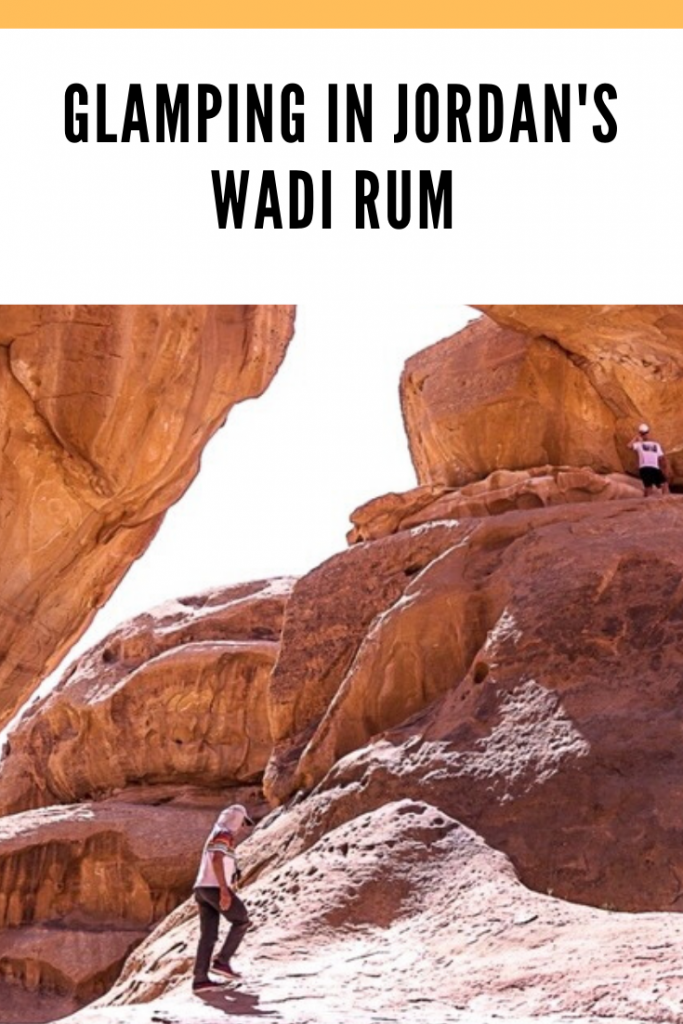