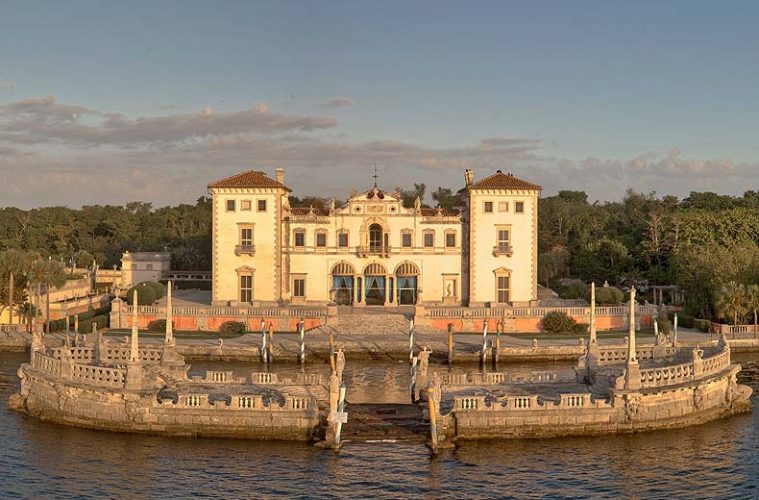 Vizcaya Museum and Gardens: Where the Renaissance Meets Miami

Have you been daydreaming about visiting picturesque European gardens? Maybe wishing you could be wandering around an exquisite villa full of antiques and European decorative art?

Don’t think England, Spain or even the Netherlands. We’re talking here about the Vizcaya Museum and Gardens – where the Renaissance meets Miami.

I understand the city has a reputation that includes partying, terrible traffic and Art Deco. However, secluded in north Coconut Grove, you can find a breath of fresh air that makes you wonder if you’re still in “The Magic City.” 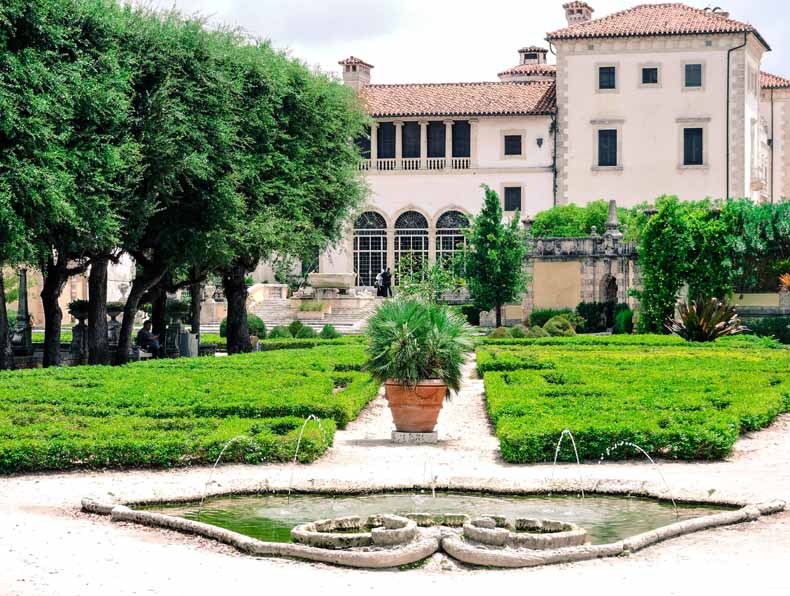 With formal gardens and beautifully decorated rooms, the Vizcaya Museum and Gardens is a lovely escape from Miami’s hustle and bustle

An Italianate palace? No, the Vizcaya Museum and Gardens

The Vizcaya Museum and Gardens, previously known as Villa Vizcaya, has been part of Miami’s landscape since the 1920’s. The former winter residence of James Deering (the famous farm tractor manufacturer), now the property of the Miami-Dade County, welcomes visitors to enjoy the beautiful estate that has served as a backdrop for numerous weddings, movies and state occasions.

To start your visit, walk along the Nature Path; just follow the sign which says: “Nature Path to Vizcaya Entrance.” This shady route, flanked by subtropical flora, takes you to the ticket windows just as the villa comes into view. (During my visit, I opted for a self-guided tour, but you can choose to enhance yours with an audio or public guided tour.) From there, you’ll walk between fountains until reaching the door of the main house. 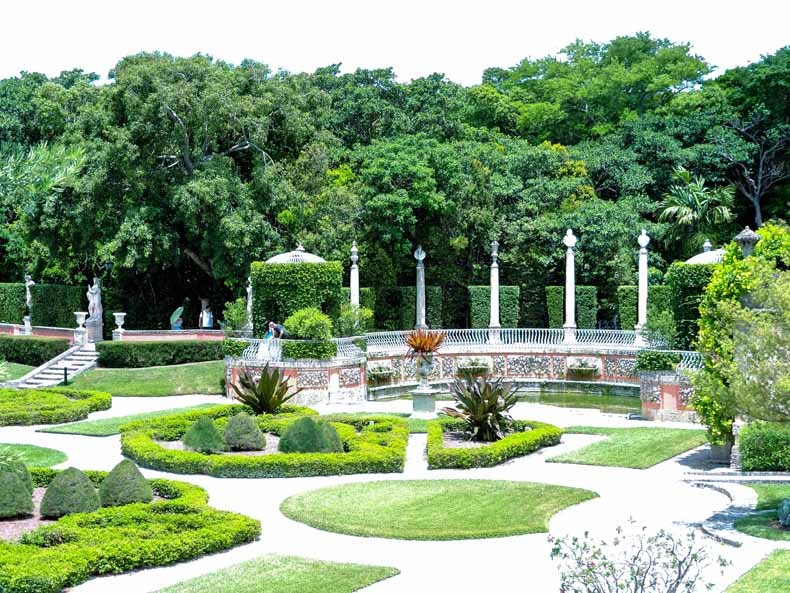 Looking at the main house, you can see the influence 18th century Italian villas played in its design and construction. Once inside, an open courtyard in the center of the building greets you and appears to divide the residence into left and right. High ceilings amplify the villa’s sense of grandeur.

Work was not only done on its facade. There are over 70 rooms, 34 of which are decorated and filled with lavish art and antiquities, including one of the largest collections of Italian furniture in the United States. 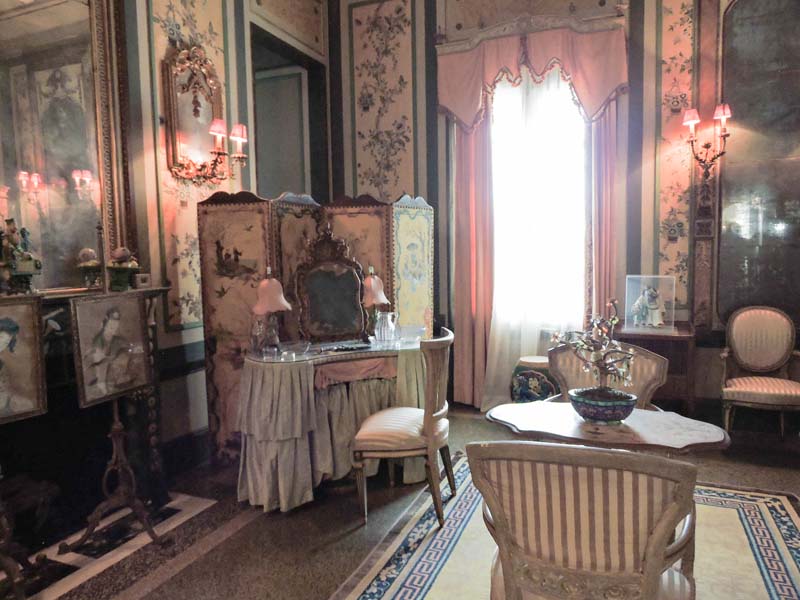 One of the opulently decorated rooms in the villa

The artifacts and style shown in the rooms cannot be categorized into just one art movement. One of Deering’s wishes was to make it seem as if the villa had been occupied for centuries. Because of that, there’s a mixture of pieces, including art and décor from the Neoclassicist, Late Baroque and Renaissance periods.

Don’t let Deering’s fascination with the “old” fool you, however.

The house was equipped with the latest technologies and modern conveniences available in the 1900’s. After all, Deering was an industrialist and an expert on agricultural technology development. One of the rooms that impressed me the most was the kitchen. A farmhouse sink, a long kitchen island and copper pots sound like today’s dream kitchen – and that’s exactly what Deering had a century ago. 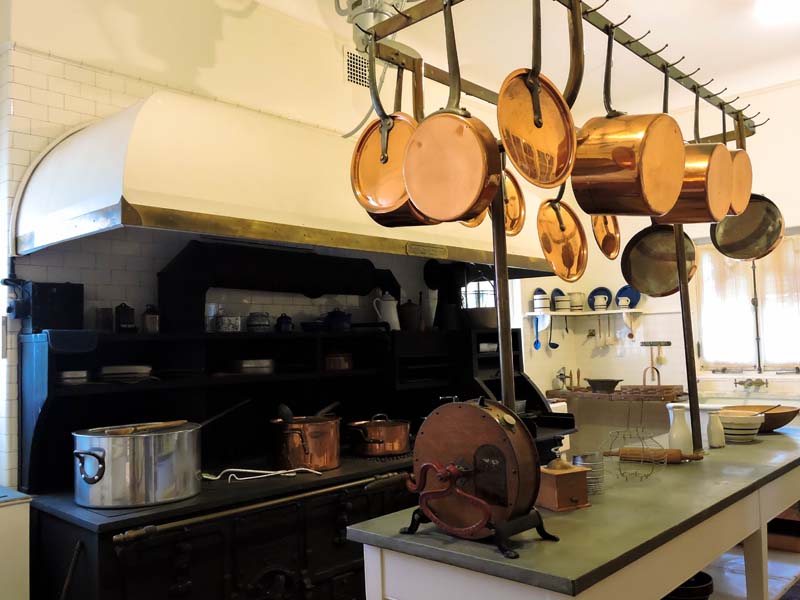 It may be a century old, but this is a kitchen I’d like to have in my own house!

After looking at the rooms, it’s time to go to the gardens. From the courtyard, you can access them through the south terrace. They are evocative of gardens created around the 17th and 18th centuries in Italy and France. 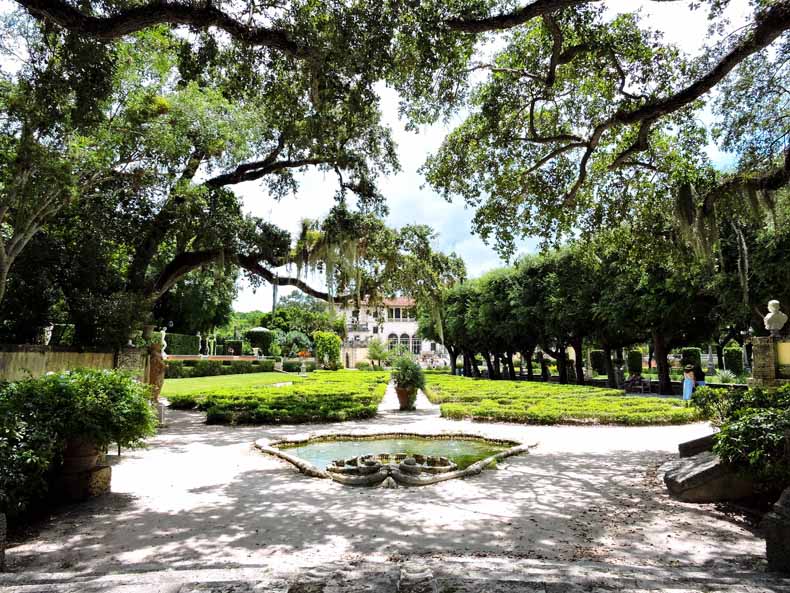 Do these gardens make you feel like you’re in Italy or France?

There are gardens within gardens – just as inside the villa, the entire garden appears to be subdivided into “rooms” with a different aesthetic or theme for each one.

For example, there’s the Theater Garden, the Maze Garden, the Fountain Garden and the Secret Garden. And you won’t find only bushes, trees and flowers, but classical sculptures too.

It’s little wonder I encountered a considerable number of quinceañeras (Latin American celebrations of a girl’s 15th birthday) and couples having their pictures professionally taken on the grounds during my visit, and why this is such a popular filming location! 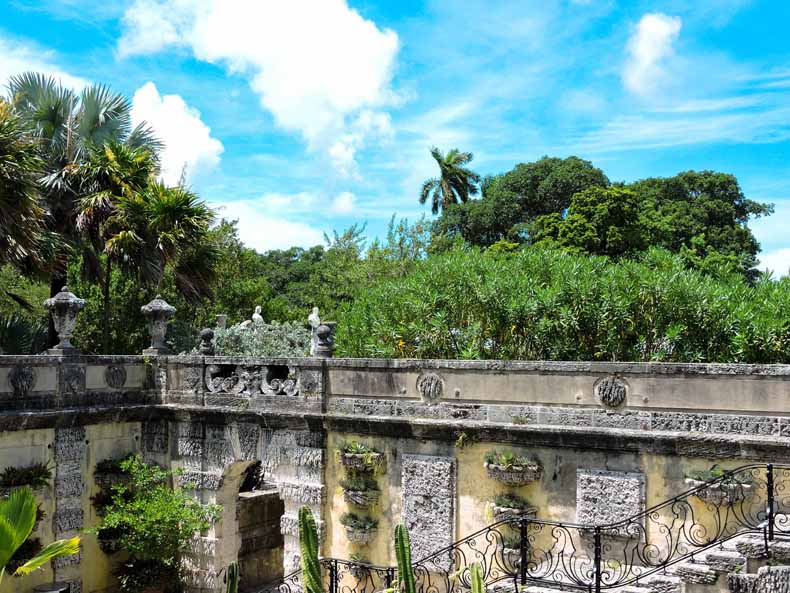 Before leaving make sure you look at the stone barge on the Biscayne Bay (one of my favorite parts of the tour), a few steps away from the east terrace.

What now appears to be a sunken ship from a distance, used to be a party boat! Pictures from The Architectural Review in 1917 show just that. It even had a teahouse and gondolas taking guests from the villa to the ship. 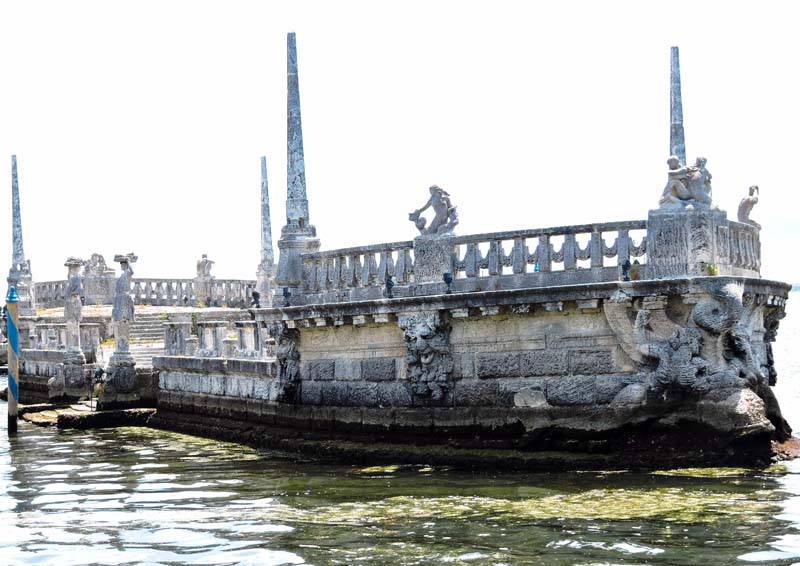 The Vizcaya Museum and Gardens at one point was abandoned, then it was the victim of a movie-like robbery, and now it undergoes constant renovations to preserve its priceless collection.

Nonetheless, the preservation and conservation efforts have been made so gracefully that none of those things will be on your mind as you stroll through the gardens, feeling the breeze from the bay and occasional water drops from the fountains. Exactly as Deering and his visitors experienced almost 100 years ago – at least that’s what I like to think they experienced. 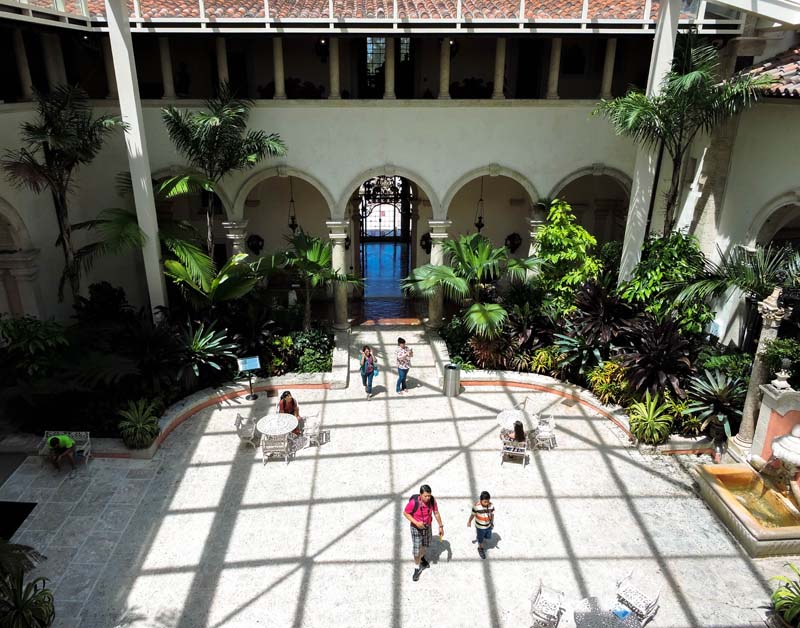 Looking down onto the courtyard of the main house 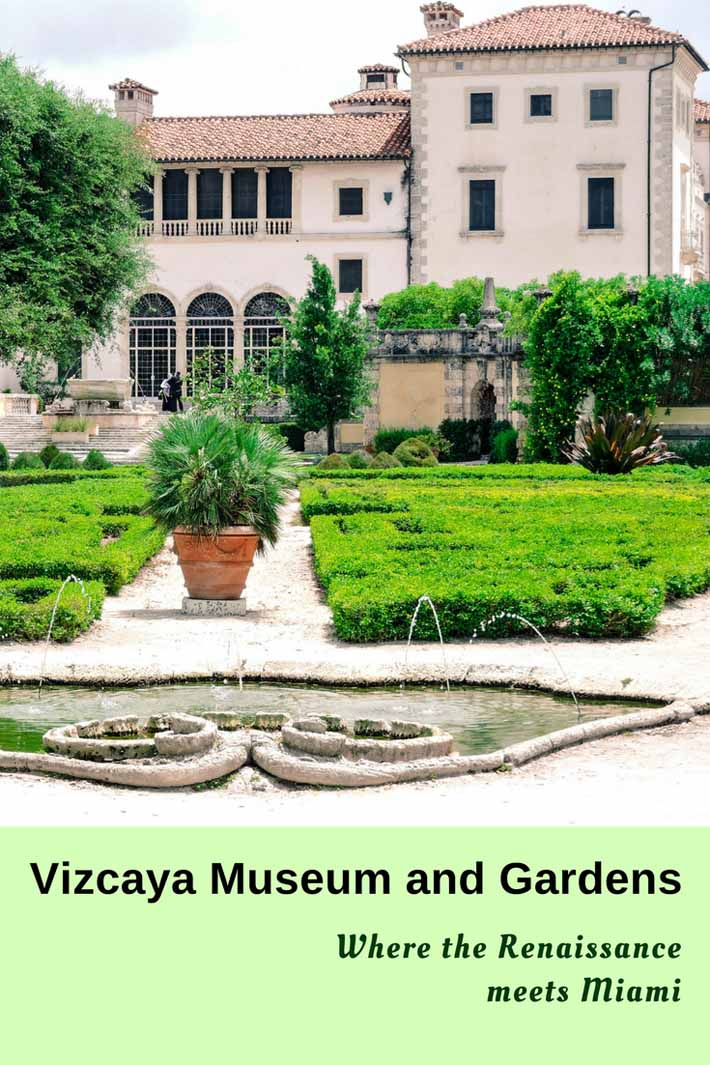