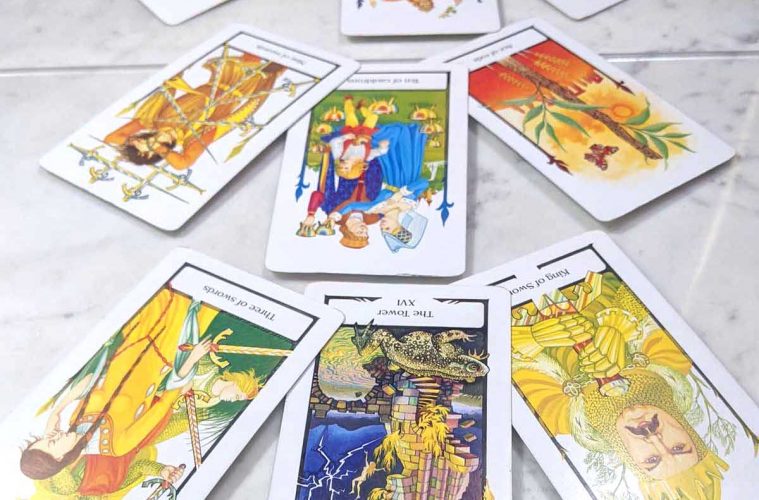 Salem’s 1690s Witch Trials were one of its defining moments and the reason the city attracts many Wiccans and witches—an estimated 1,000 practitioners.

The gory tale of greed, conspiracy, and murder also draws plenty of ghost hunters and chill seekers. And they flock to Salem, Massachusetts, by the thousands during Haunted Happenings throughout October. But it’s still possible—and preferable, especially if you’re crowd-averse like me—to explore the city’s modern witch culture year-round.

Since childhood, I’ve been a frequent visitor to Salem—one of about two dozen cities and towns clustered along the North Shore, the swath of land between Boston and the southern border of New Hampshire. The city’s mercantile history and beautiful architecture have always been more alluring to me. But until last summer, I’d never set foot in a Salem witch shop.

As part of a press trip, I had the opportunity to take an up-close look at Pentagram, Salem’s newest witchcraft shop, and have a tarot reading with co-owner Leanne Marrama. The experience wasn’t what I thought it might be.

On Wiccans and witches 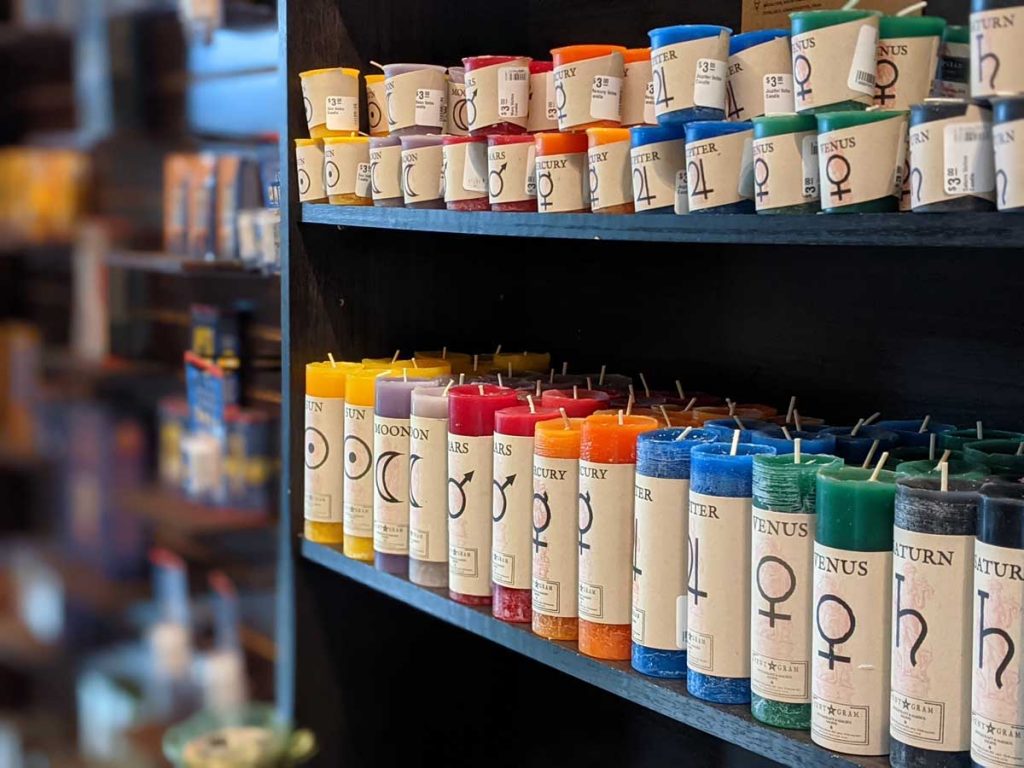 Shelves of candles at Pentagram in Salem

First, a bit of clarification: Wiccans and witches aren’t anything like the wart-nosed pot-stirrers of Shakespeare or Hollywood. And they’re not one and the same. In its most basic sense, witchcraft is wholly secular and involves the practice of the “magic” of the world around us.

Wiccans’ practice witchcraft, but with a religious component focused on the female principle—mainly nature and the cycle of the seasons as embodied by gods and goddesses. While not every witch is a Wiccan, every Wiccan is a witch. Wiccan’s practice is positive-minded and uses prayer, meditation, ritual, and spell-casting.

While not every witch is a Wiccan, every Wiccan is a witch. 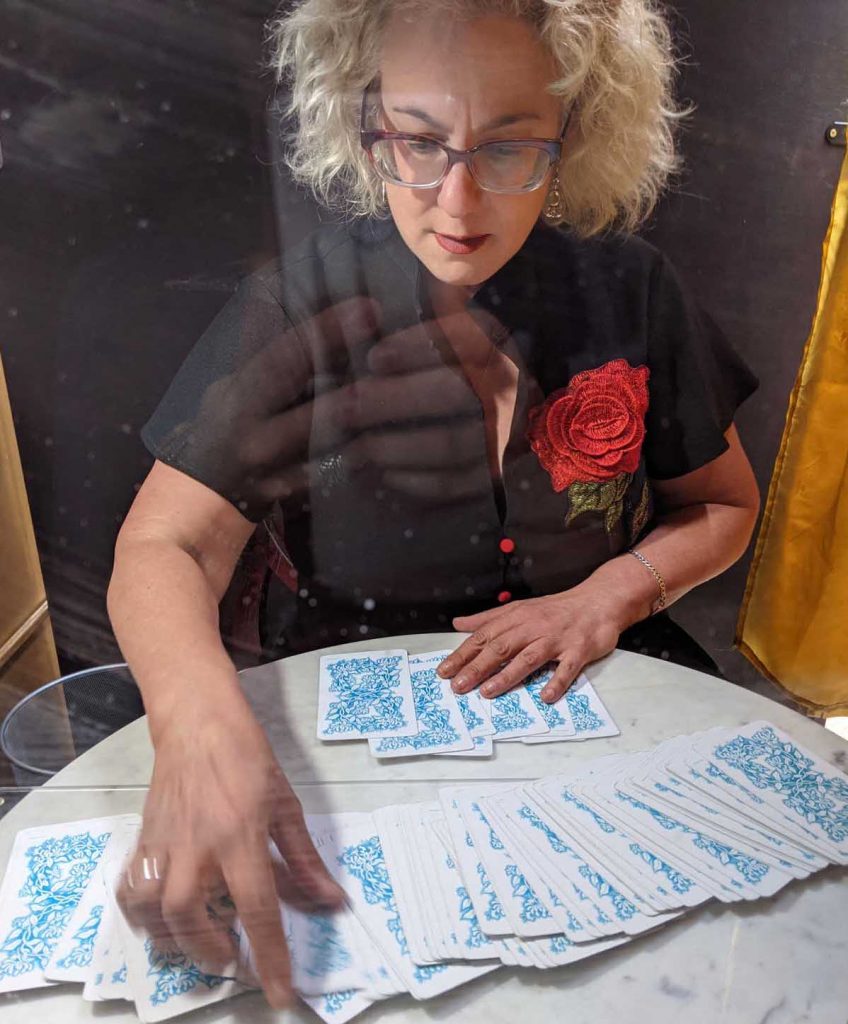 On a gray Thursday, with the sky intermittently opening up and washing the streets in downpours, I ducked into Pentagram, a Salem witch shop. I wandered the shop’s moody interior, its walls and tables lined with large glass jars of herbs, candles, crystals and healing stones, cards, jewelry, and other witchcraft tools and paraphernalia.

A young man behind a counter opened jars and tucked spoonfuls of herbs into waxed paper bags, while a handful of other customers browsed the crystals and jewelry.

Marrama appeared for my tarot reading. Petite and animated, with a bob of curly silver hair and large horn-rimmed glasses, she was dressed in head-to-toe black, her bold red lipstick matching the embroidered rose above her heart. She greeted me warmly, and ushered me to a booth at the back of the shop. With a zip, she drew the mustard-colored curtain.

I stifled a heavy sigh as I sat. I am the Scully to the world’s Mulders, one eyebrow so continuously quirked that I’m surprised it hasn’t frozen in the middle of my forehead. As I watched Marrama’s quick hands shuffle the deck, I surreptitiously checked the time on my phone. 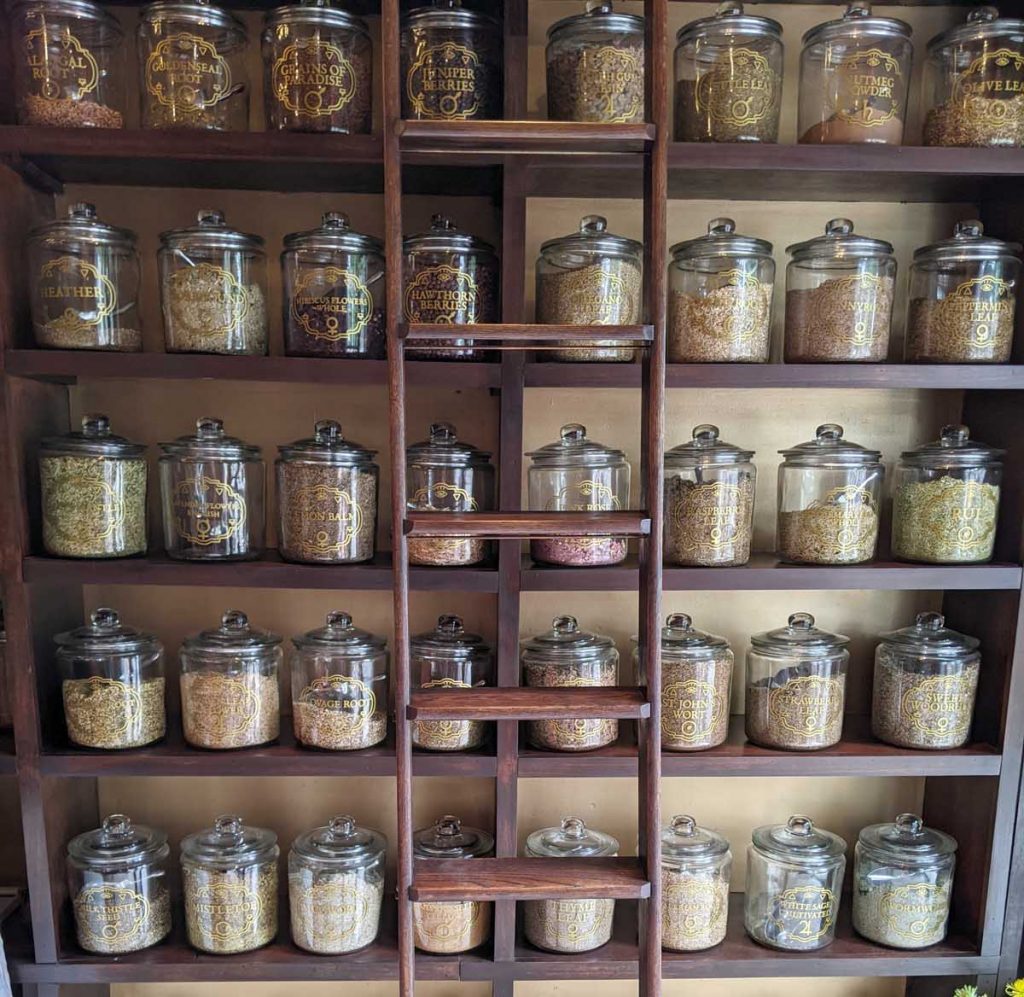 Shelves lined with jars of herbs at Pentagram

She drew one card after another, creating fanned trios over the marble tabletop. King of Swords, Three of Swords, Nine of Swords, Seven of Swords—there were a lot of sharp, pointy things in my reading.

They were, Marrama told me, symbolic of writing and intellect. Swords cards are also associated with conflict, whether internal or external, and can often hint at buried truths that need to be unearthed in order for the subject to move forward.

She placed more cards on the table, which she related—accurately—to the recent death of a person with whom I’d had a complicated relationship. My mother had died a little more than a year prior, and I still hadn’t processed my feelings about it.

“It was a terrible loss. You haven’t allowed yourself to grieve. But it’s brought you closer to someone you’d drifted apart from,” she told me. Right again: my father. Things between us would get better from here, she affirmed.

Marrama made some predictions for the year ahead. Then she drew another swords card and laughed. “You have gifts you can’t shut off,” she said. “What you do heals people and in turn, heals you.”

She also noted that I had a special connection to Salem, to the North Shore, at this time in my life. The observation was so on the nose that I nearly let go of my doubts like a helium balloon, and gave in to the wanting—to believe, to know, to make sense of the nonsensical. As if on cue, a rumble of thunder reverberated against the walls of the building.

As I stood to leave, Marrama swept the cards off the table and back into a deck. One fluttered to the floor: the Ten of Wands. She shook her head. “You’re busy—too busy. You’re always picking up sticks. You make it work, but you need to slow down.”

I swallowed hard, thanked her, and sped out of the shop. 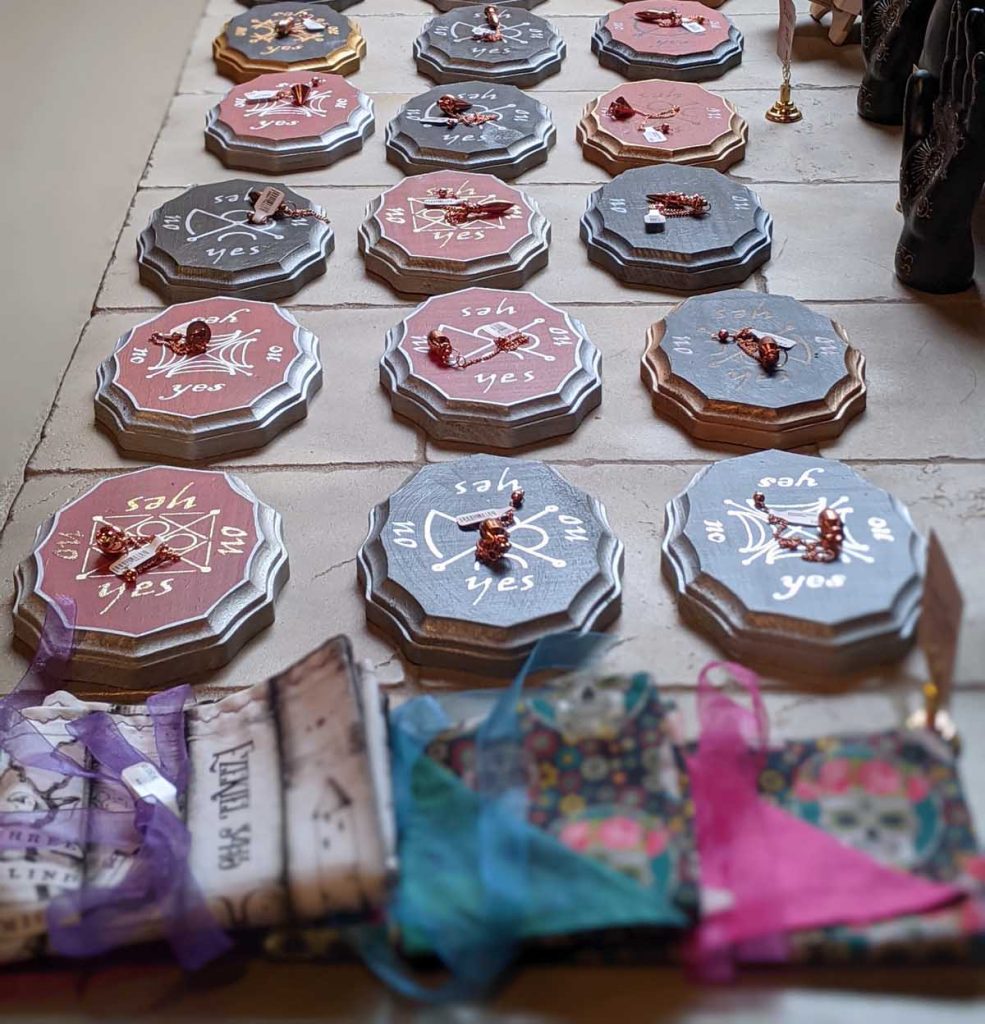 Jewelry for sale at Pentagram witch shop in Salem

Once on Derby Street, after exiting the Salem witch shop, the clouds broke open in a sudden burst of rain. I escaped into the light, airy space of Jolie Tea Company, its wall lined with jars of a different, less mystical kind. After taking a whiff of some of the shop’s many fine, blended selections, I chose a fig Formosa oolong.

I brooded in the corner, my hands wrapped around a steaming cup redolent with fruit and vivid blue cornflower petals, and thought about what Marrama had told me, whether it could have been real. My logical, over-analytical mind said No way, while my heart cried Yes!

Headed to Salem, Massachusetts? A great place to stop along the way:

The Boston Hotel at Embassy Row 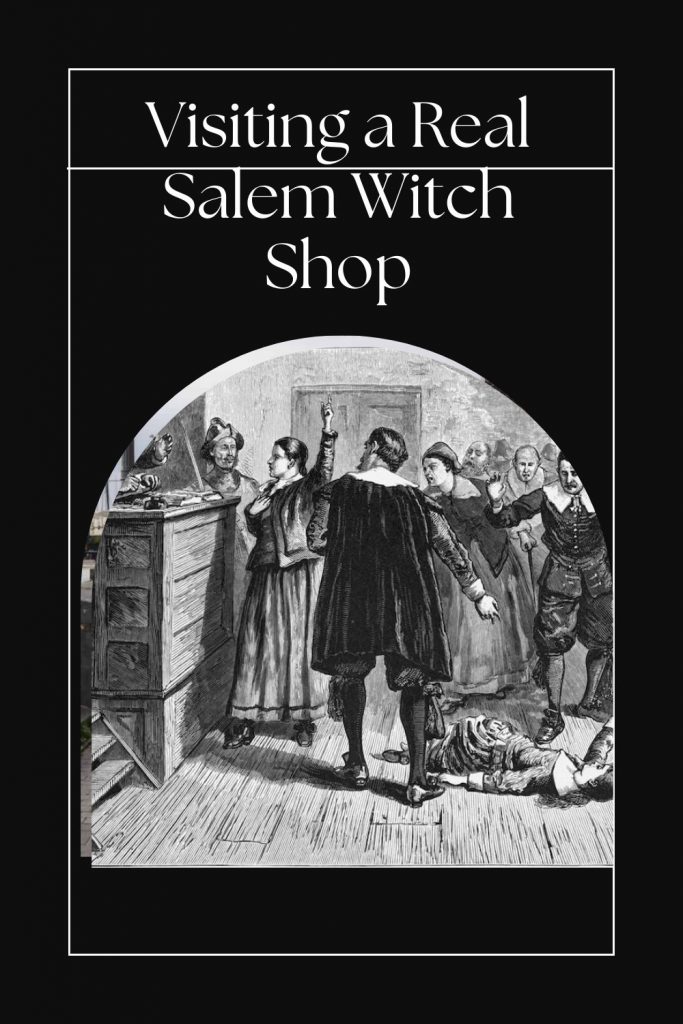