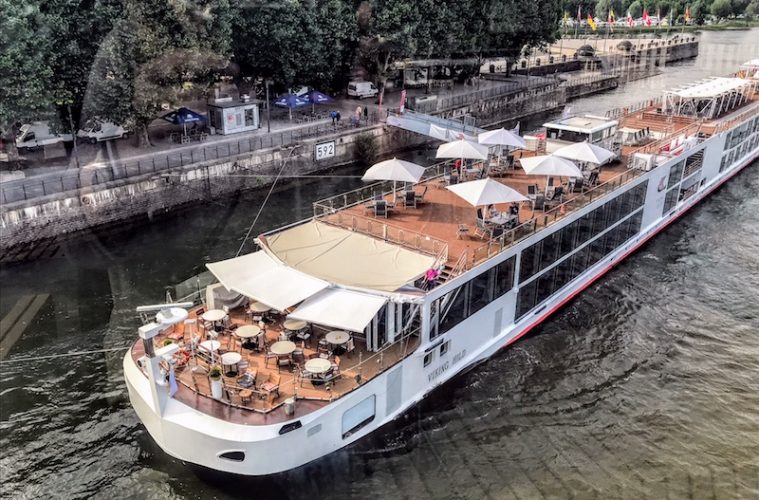 There’s been no time better than the present to take a river cruise in Western Europe. As new ships launch and river cruising grows in popularity, an almost-infinite number of itineraries are waiting to be discovered —each of them offering a unique mix of passengers, places and ports.

We recently sailed on a Viking Rhine River Cruise on the Rhine and Moselle Rivers unsure of what to expect, as many of the port stops were in smaller cities, towns and villages with new-to-us names.

We soon realized why these cruises have become so wildly popular:

Our Viking Rhine River Cruise passed through three counties— Switzerland, France and Germany—where the banks of the rivers are lush and green in springtime. With beautiful scenery and fresh mountain air, it’s not surprising that the region is so popular with hikers, bicyclists and campers. 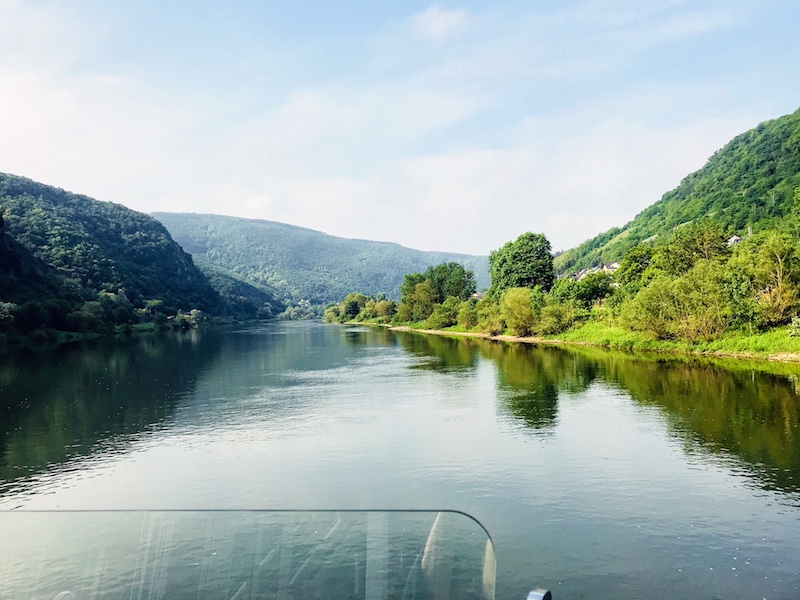 The spacious, glass-doored balcony of our stateroom on the Viking Hild (as well as public areas on the ship) offered “box seats” to view the ever-changing spectacle of verdant hillsides dotted with medieval castles, and ornate church spires and steeples— as the ship slowly meandered upon the rivers. Sitting on the balcony, we could often hear church bells ringing. 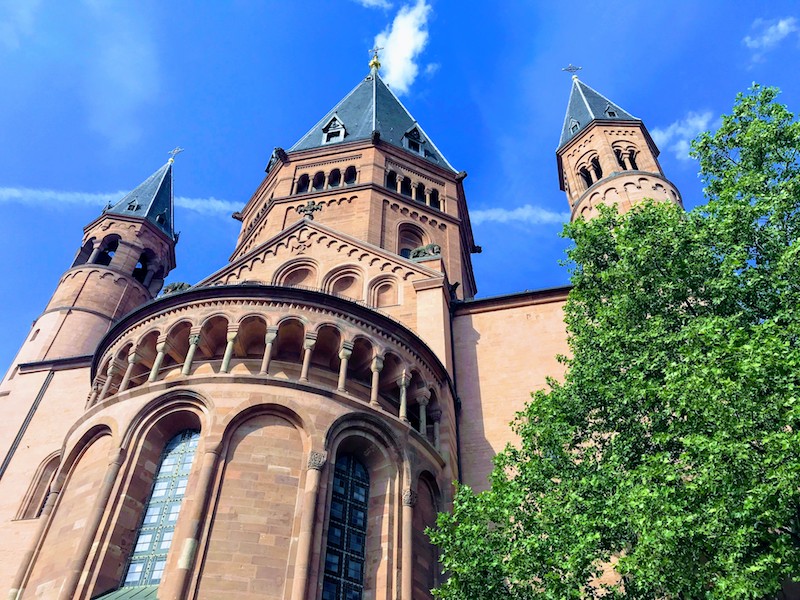 One of the most spellbinding portions of the cruise is along the Middle Rhine, also called the Rhine Gorge. With more than 23 picturesque castles, it was designated a UNESCO World Heritage Site.

We found spectacular vantage points on the shores, too, whether from the top of a church or castle window. One of the most thrilling views was from a cable car in Koblenz suspended over the confluence of the Rhine and Moselle. (The view of our ship above was taken from the cable car.)

Although many cities on the Rhine suffered bombing during World War II, many have well-preserved or reconstructed “old towns” brimming with history. Their small streets and cobblestone alleys lined with half-timbered houses and different architectural styles reflect the long and diverse multicultural history of Western Europe. 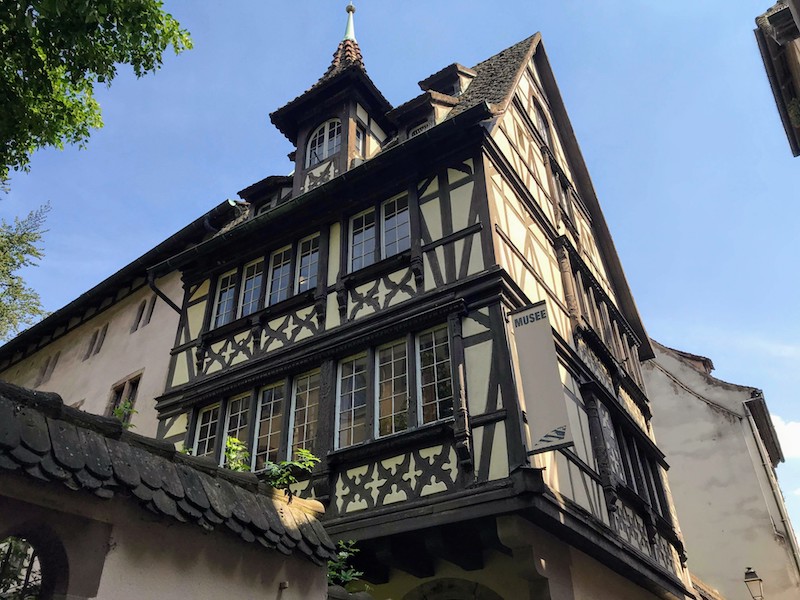 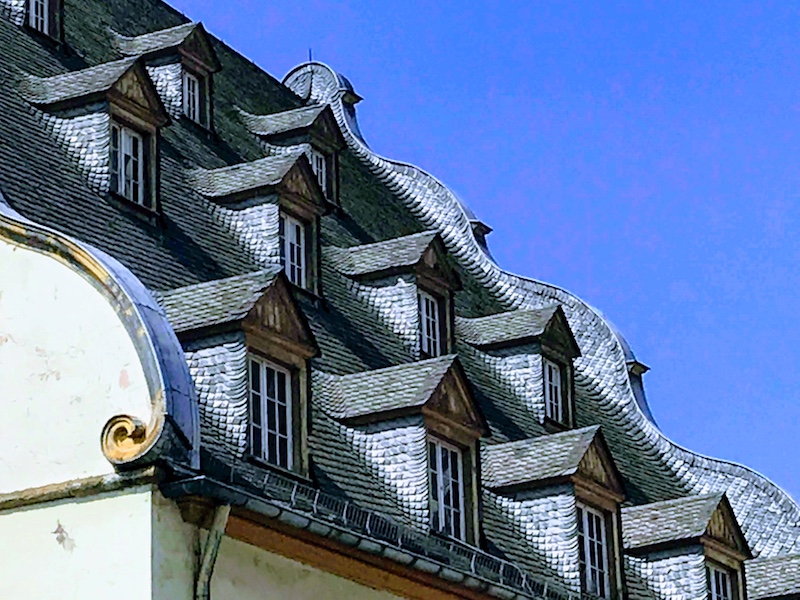 Because Western Europe has a well-developed tourism infrastructure, local guides are English-speaking and tend to be quite knowledgeable about history, customs and culture. (Viking provides free, guided excursions at every port.) Many tours include free time to wander, stop for a snack, peek into small boutiques, and/or talk to townsfolk who are generally eager to engage with Americans.

Our route on the Rhine and Moselle rivers passed through some of Germany’s most spectacular wine-growing regions (much like the river cruise itineraries do on the Douro River in Portugal). 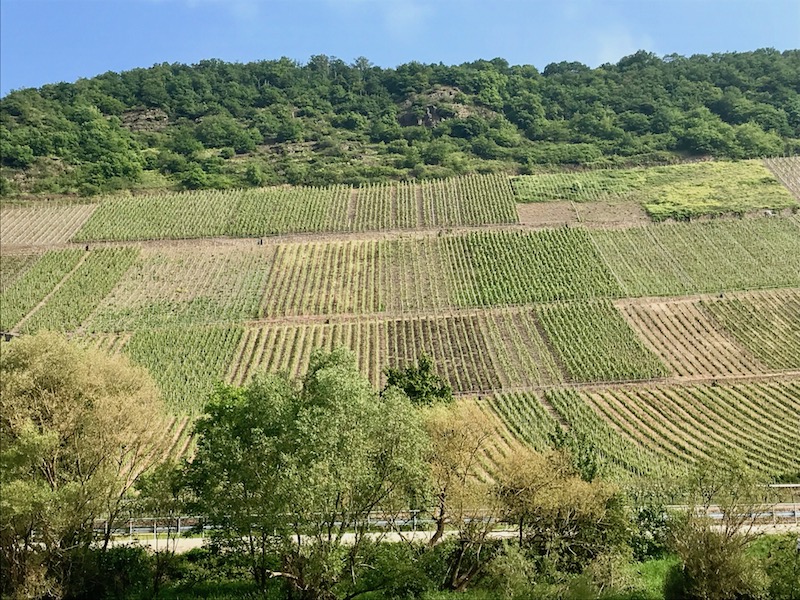 One of the many vineyards along the Rhine (Credit: Jerome Levine)

Onboard, the wine steward pairs complimentary local wines with both lunch and dinner. Other premium wines and spirits can be ordered, at cost, at the ship’s bar. 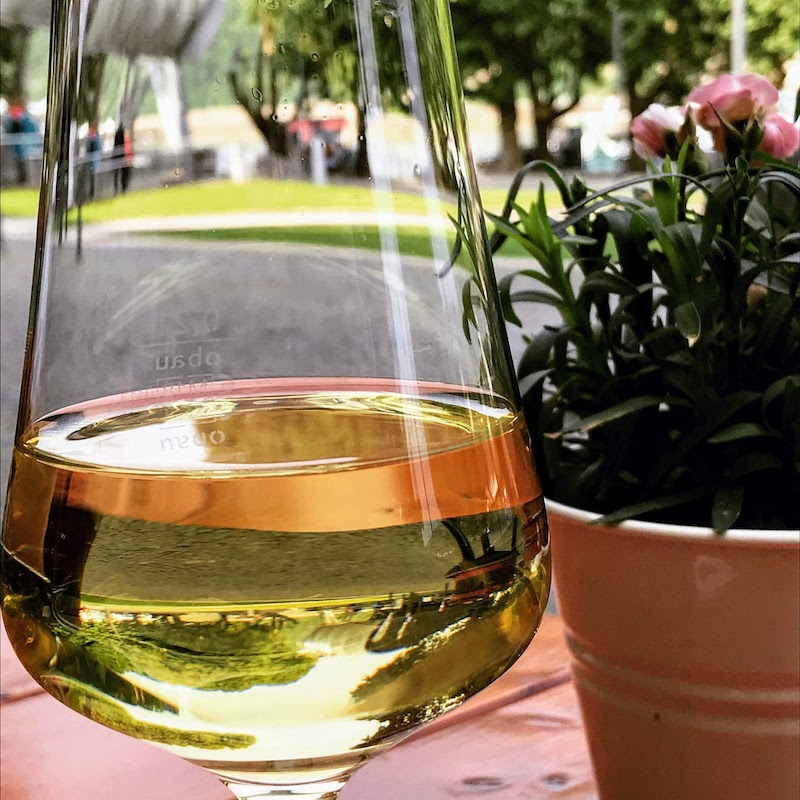 Shore excursions include visits to vineyards, wine-tastings and ample opportunities to savor a glass of local Riesling at a bar. Of course, Germany is also known for its beers, often best enjoyed in one of the ubiquitous beer gardens.

If you’ve never traveled through canal or river locks, this is an opportunity to witness this fascinating technology. Hild traveled through 18 locks over the course of our cruise (some of them at night). They remind travelers of the importance of the European waterways, once primarily used for trade and transport of goods from city to city and country to country. 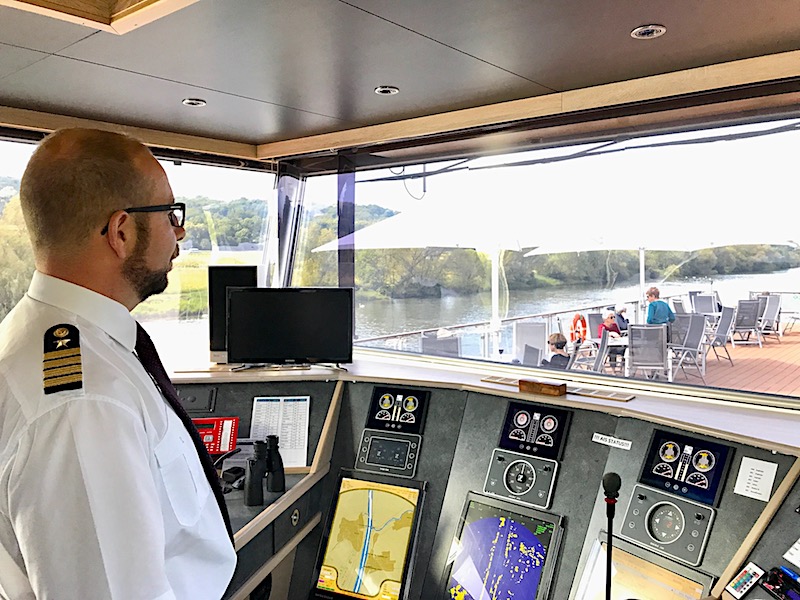 Johannes Bons, Captain of the Hild, at the bridge explaining the system of locks (Credit: Jerome Levine)

Locks enable vessels to move smoothly on a river or canal even while water levels on both sides of the lock vary. Ships enter a closed compartment, where it is locked between two doors, as the water level is adjusted up or down.

Don’t stick your hands out the balcony: From your Viking stateroom, you can see that there isn’t much clearance between your ship and the high encasement, requiring expert navigation skills on the part of the captain. 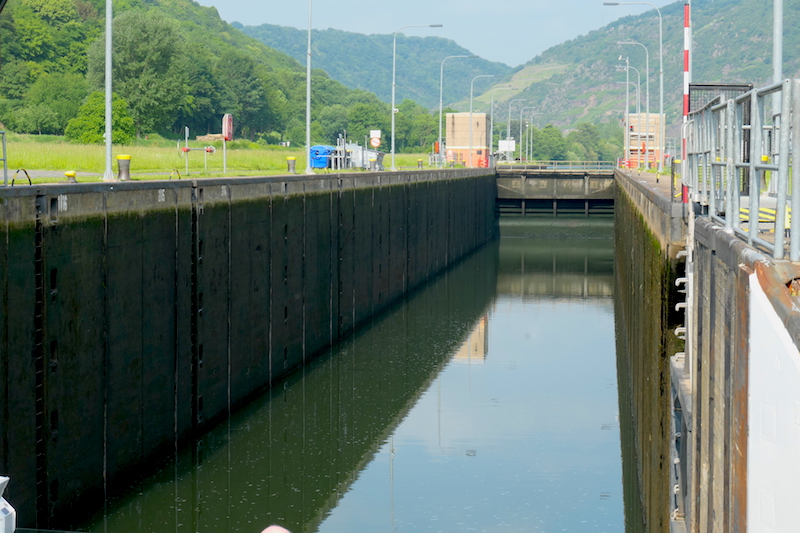 Entering one of the locks on the river (Credit: Jerome Levine)

To this day, the Rhine continues to be one of the most important waterways in Europe. In addition to other riverboats, you’ll still find many interesting container ships and working barges along the way.

5) A Feast for Foodies

If you’re a food lover, you’ll revel in opportunities to taste local specialties both on the ship and off. Viking has been making great strides to incorporate local food products and recipes into its menus. During our Rhine River Cruise, the crew organized a delightful  “German Night” with an all-German buffet dinner, local beers and wines and festive music. 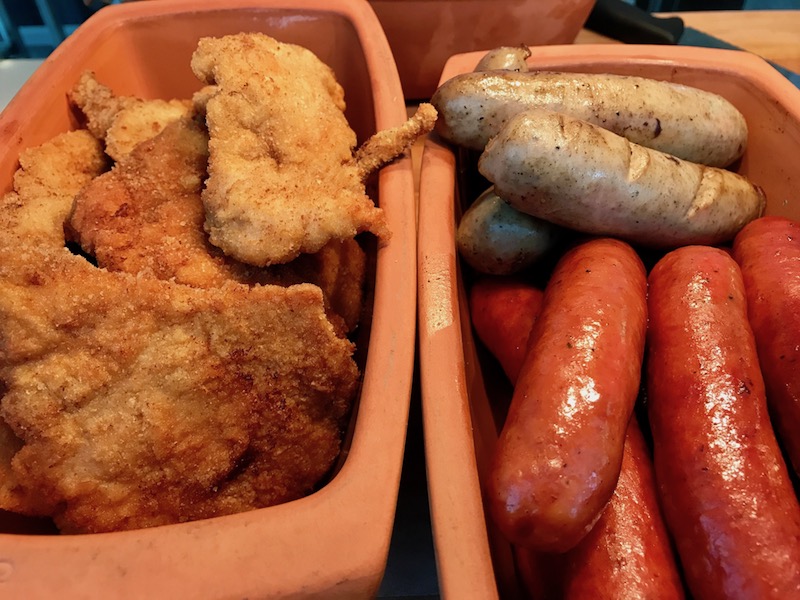 Some of the delectable local specialties served on German night on the Hild (Credit: Jerome Levine) 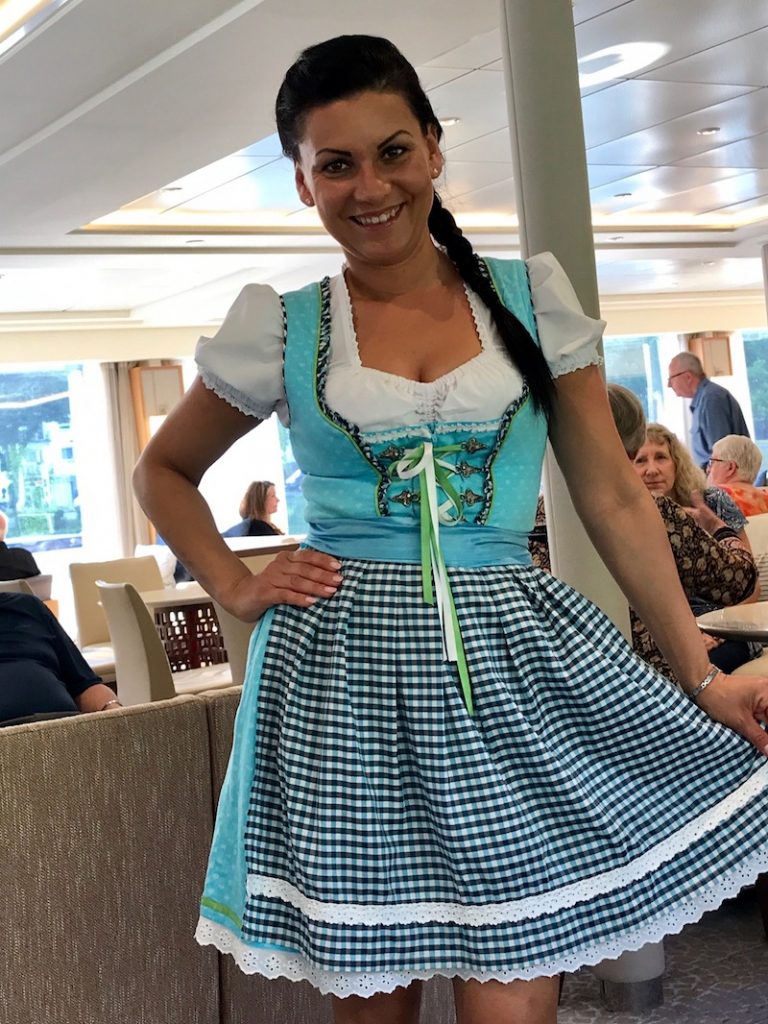 On German night on the Hild, crew join guests in the festivities (Credit: Jerome Levine)

On land, kiosks, food trucks and quaint restaurants lure you to savor new tastes. For example, you can sample hearty dishes like raclette and fondue in Switzerland or taste Alsatian specialties like kougelhopf (a delicious, yeasty cake made in a Bundt mold) or a tarte flambée (a flatbread like dough topped with crème-fraîche, cheese and thinly-sliced onions). 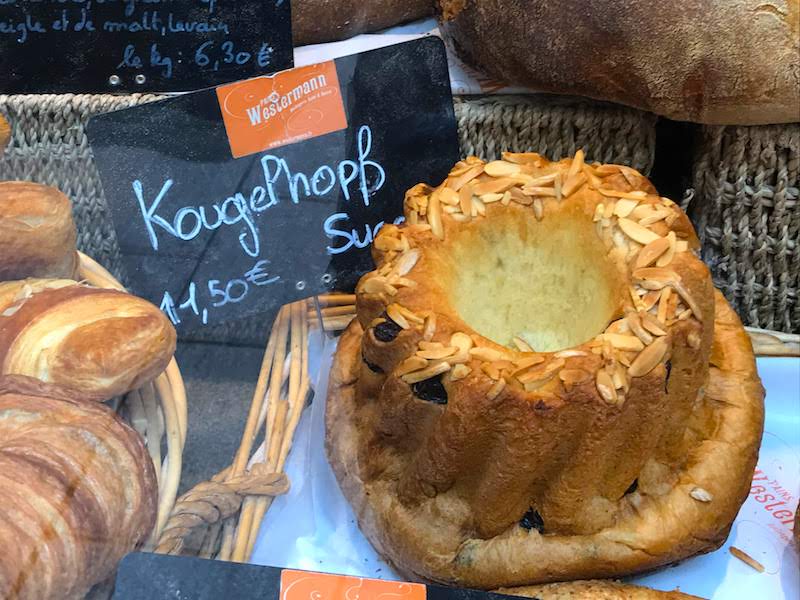 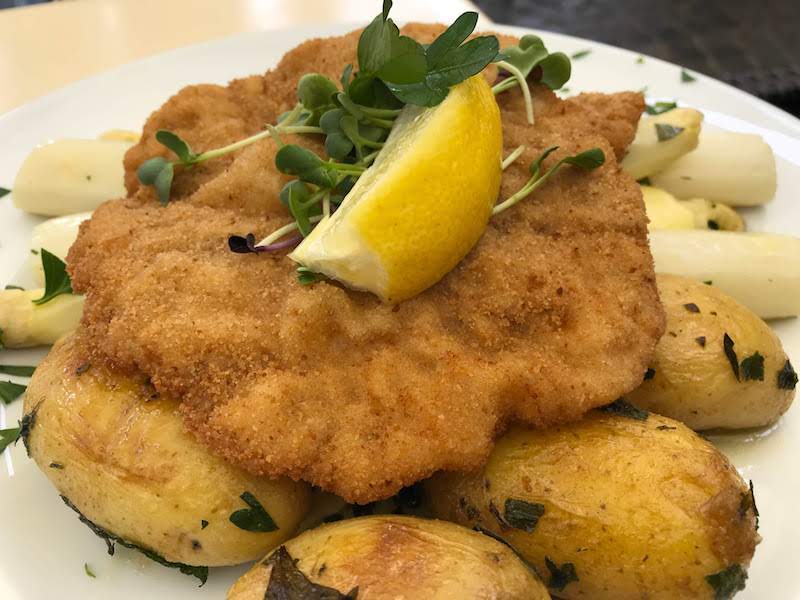 Or you may stop for a warm pretzel or grilled wurst (sausage) at a kiosk on one of many town squares, or simply rest your feet and people-watch over coffee at an outdoor café.

Opportunities for tasting local cheeses are endless—and who can resist Swiss chocolates? Worried about calories? Most river cruise guests walk an average of 3-5 miles per day during shore excursions.

…and one more reason

There’s something very peaceful and hassle-free about the slow pace of cruising the Rhine on a floating hotel. Both on land and on water, you pass relaxed locals sitting on park benches, tending their flower and vegetable gardens, or riding bicycles by the river banks. You’ll soon feel at one with the tranquility and authenticity of the river. 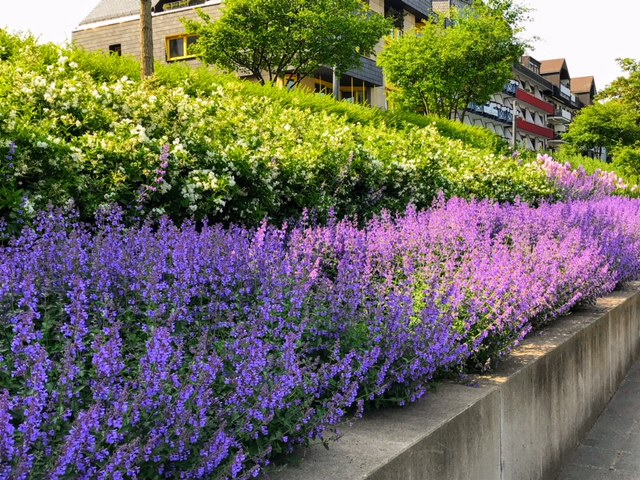 Disclosure: We were guests of Viking River Cruises but any opinions expressed in this post are our own.

Viking River Cruises on the Rhine