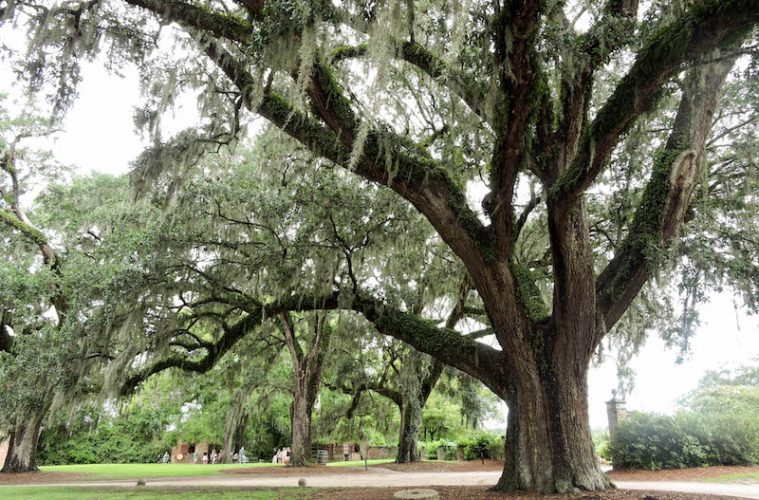 Located just 30 minutes from Charleston, South Carolina, Boone Hall Plantation & Gardens is primarily known, at least recently, as one of the filming locations for the movie, The Notebook. The location, however, is much more than that.

As you can imagine, a plantation that has been continuously growing crops for over 320 years has a lot more history than only being the scene of a movie backdrop.

The summer sky was looking treacherous the morning of my visit, but this is a place I had wanted to go to for a while. A little bit of rain was not going to deter me from going. 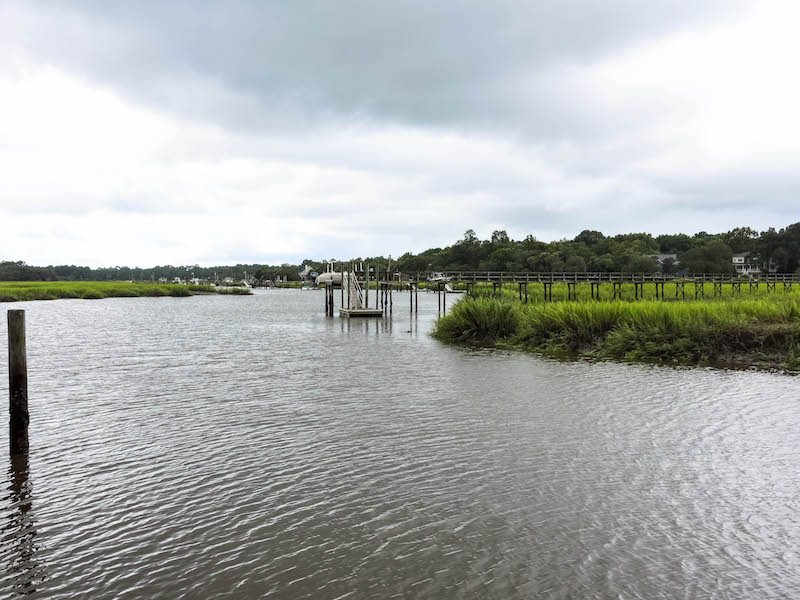 Ashley River outside Charleston on a rainy day

After paying admission at a toll booth, there was still half a mile to drive but it wasn’t just any stretch of road.

This famous “Avenue of Oaks” was completed by the second owners of the plantation, the Horlbeck family. I had seen numerous pictures of the place, and its centuries-old southern live oaks on each side of the road, but that experience didn’t compare to driving through them and being amazed by their beauty.

After parking the car, we went straight to schedule a Plantation House Tour. (You should do this before doing anything else because spots fill up fast.) We were lucky to get one of the last spots for a tour that would start in less than 10 minutes, so we almost had to run towards the house.

Gardens flank the house on both sides, and also the back. The porch is elevated, just enough for carriages to be able to park and drop off owners and guests without the need for anyone to climb stairs. The porch ceiling is painted Barbados blue to shun evil spirits. 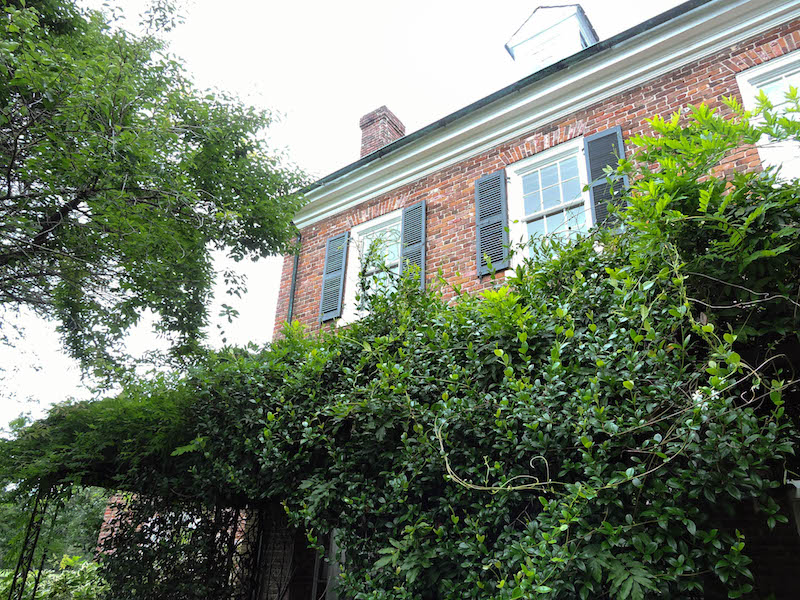 Side view of the Plantation House

Once inside the house, guides are dressed in colonial era dresses. The furniture and décor do not appear to be of the same style, but most of the pieces are gorgeous.

The guides tell the story of how the property ended up in the hands of Major John Boone after his father-in-law gifted it to him as a wedding gift. Then, you hear how it was sold to the Horlbeck’s, and more than a 100 years later to Canadian Thomas Stone. Stone and his wife were responsible for demolishing the old house and building the one that’s now on the plantation.

However, the selling and buying of the land and property didn’t end there. Previous owners also include a Georgian prince, and Dr. Deas, who sold the property to the McRaes, the Canadian family who are still the owners.

While all of this was happening, something did not change for years. The plantation had approximately 85 slaves working and living on its premises.

The truth is that this part of the plantation’s history was only mentioned briefly during the tour.

Anyone who knows me well knows that my imaginary dream house is a Spanish villa or a Colonial period house. Nonetheless, I have always been conflicted about plantation-style homes.

I am aware of the hands that built it, and the literal blood, sweat, and tears that entailed. That’s why, at the end of the tour, I was glad they were going to talk about the slaves at the plantation, near the slave houses.

Sadly, I was disappointed. I am not an expert on slavery history but I knew they were making it sound much better than what it was. The focus of the talk was limited to how slave houses were built, using leftover (not-good-enough- for-sale) bricks. 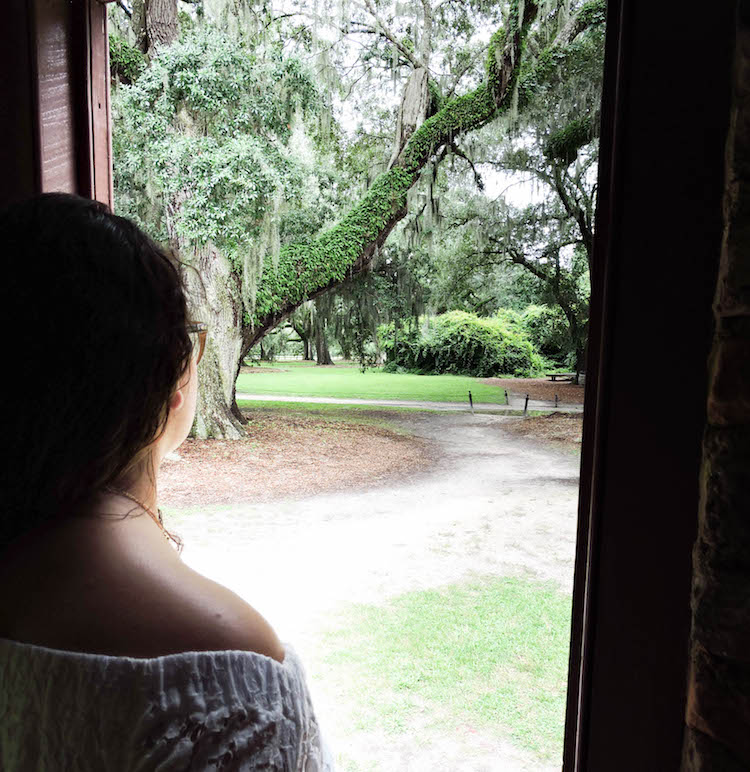 Author looking out of one of the slave cabins

Maybe it was because the reality is too harsh and there were kids among the visitors.

I believe that just because something is hard to digest doesn’t mean we can turn a blind eye to it.

Luckily, inside nine slave cabins, there was an exhibition called ‘Black History in America.’ The exhibition included videos and artifacts showing how many slaves were being shipped to and from the Charleston port at one point, how they were quarantined, and how some of them ended up working at the Boone Hall Plantation. Slaves would work many hours, forming interpersonal and cultural traditions that are still alive today and can be seen in the Gullah culture.

Even if there was nothing specific said about the treatment of slaves at the plantation, the exhibition was refreshingly honest. I ended up enjoying this presentation even more than the house tour.

This visit to Boone Hall Plantation wasn’t exactly what I expected. I enjoyed my tour of the house and gardens, the place is beautiful, but aesthetics are only one reason you will want to visit. 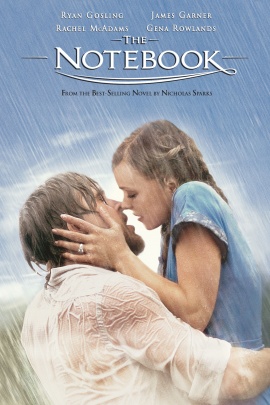 Movie poster from The Notebook (screenshot)