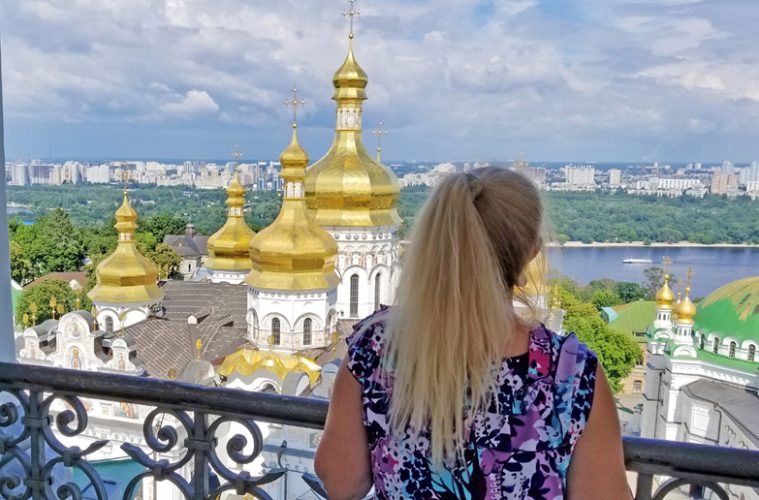 When GOT Contributor Patti Morrow visited Ukraine in 2018, she couldn’t have imagined the Soviet invasion now taking place and its ramifications across the globe. We asked Patti to add some reflections to her travel post that offers a glimpse of a country, no stranger to catastrophe, that may be off-limits for travelers for some time.

Since this article was originally published in November 2018, things have changed dramatically in Ukraine. It really saddens me, because Ukraine is not what people think it is.

It’s not the bland, utilitarian stereotypical Soviet-style architecture. Kyiv (Kiev*) is filled with colorful buildings topped with golden onion domes; lovely Lviv, on the western side, could pass for any charming Austrian, Hungarian, or Polish old town; Odesa on the Black Sea is a fun-filled resort city.

Even when I visited Ukraine in 2018, it was hungry for tourists, and the recent unrest will only ensure that visitors, especially from the United States, will not be interested. I hope the issues are resolved quickly…Ukraine needs us!

*Kiev, the English language version of the city’s name based on the historical Russian derivation is now dwindling in favor of Kyiv.

Kyiv, the lively capital and largest city in Ukraine, greedily takes up both banks of the Dnieper River. Nearly three million people call this fusion of ancient and modern architecture home. Kyiv’s beautiful cathedrals and monasteries spill out onto cobblestone streets and abundant green spaces and parks.

Although many buildings were destroyed during the first Communist occupation, some of Ukraine’s stunning architecture was spared and serves as a testament to the city’s fierce tenacity.

First known in the 5th century as Kievan Rus, Kyiv – or Kiev – reached its greatest period of prosperity during the 11th and 12th centuries, when it was a major trade route between the Baltic and the Mediterranean. Although Kyiv has been trying to expand tourism, challenges exist for North Americans. For example, English is not widely spoken, and then there’s the unfamiliar Cyrillic alphabet. In order to enjoy our visit to the fullest, my friend Alison and I toured with JayWay Travel, a boutique travel agency specializing in Eastern Europe.

They assigned us to Katia, their local Kyiv representative, who helped us to navigate the best spots and hidden gems. These are my top five reasons to visit Kyiv: 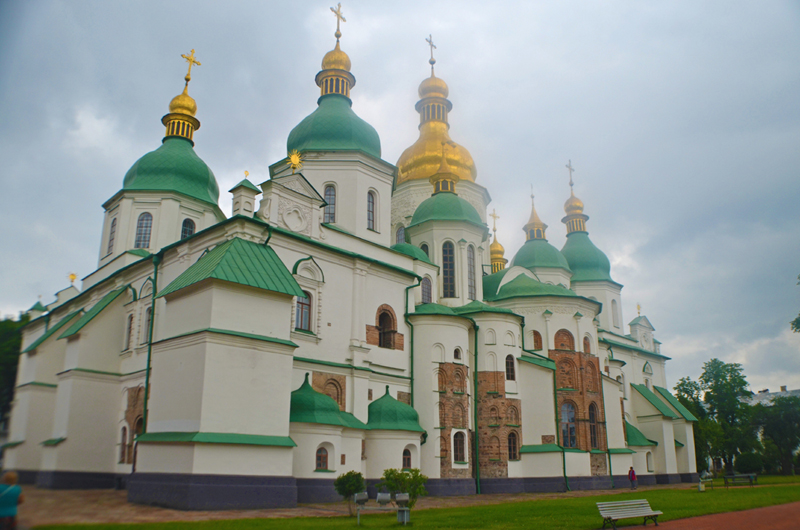 Visiting St. Sophia cathedral UNESCO site is one of the top five reasons to visit Kyiv

Named after the great Hagia Sofia in Istanbul, St. Sophia, one of the city’s landmarks, was the first UNESCO World Heritage site in Ukraine. In addition to the stunning green and gold-domed cathedral, the complex also includes a bell tower and the House of Metropolitan, an architectural monument from the 18th-century that’s now a museum.

Centuries before the Czars, Kyiv was the center of Slavic spirituality. Construction of the Byzantine cathedral, the oldest church in Kyiv, first began around 1037 by Prince Yaroslav the Wise, but the cathedral took two decades to complete. St. Sophia is where the princes were crowned in Kyiv’s heyday, and it was the burial place of the Kievan rulers.

Controversy has surrounded the church in modern times, with different religious factions laying claim to it. In 1995, a bloody riot around the funeral of Patriarch Volodymyr prevented his burial on the premises. As a consequence of this incident, the church no longer holds services but offers the public a secular museum of Byzantine history and architecture.

I found the interior of St. Sophia more fascinating and different than the other churches in Kyiv, which are decked out in the finest gold leaf and stained glass. By contrast, the interior of St. Sophia is unique in its simplicity. The medieval wooden arches retain their original frescoes and mosaics, all of which are in a state of restoration. Unfortunately, we weren’t permitted to take photos inside. 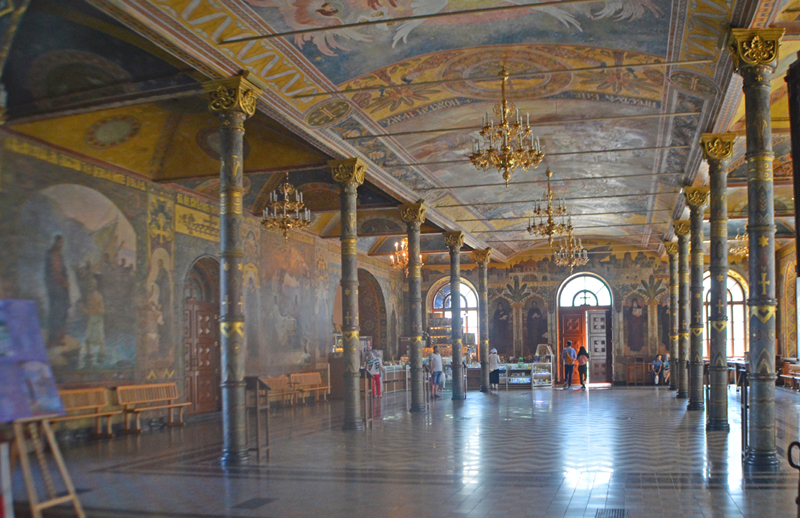 Inside the Refectory Cathedral in Pechersk Lavra

The 11th-century UNESCO World Heritage site and one of Seven Wonders of Ukraine, Pechersk Lavra (a.k.a the Monastery of the Caves) is a highlight of Kyiv and should not be missed.

On the grounds of the site – under the gift shop, of all places – I descended down a flight of stairs into a labyrinth of narrow catacombs. On each side of the tight passage, I was surprised to see open coffins displaying mummified bodies of monks who once lived on the premises.

Alison and I paced ourselves and were able to climb to the lookout platform of the bell tower. We were well-rewarded by a panoramic view and great selfie opportunity, with the brilliant gold domes of the Dormition Cathedral and Dnieper River in the background.

On the third tier of the bell tower, along with the 360° views, were three large bells. “Let’s try to ring it!” Alison said, pointing to the nearest one. On the count of three, we exerted a mighty leap. Unfortunately, our hands were well below the ringer, and we collapsed to the ground from the effort. But we gave it a good try and contributed to the amusement of onlookers. 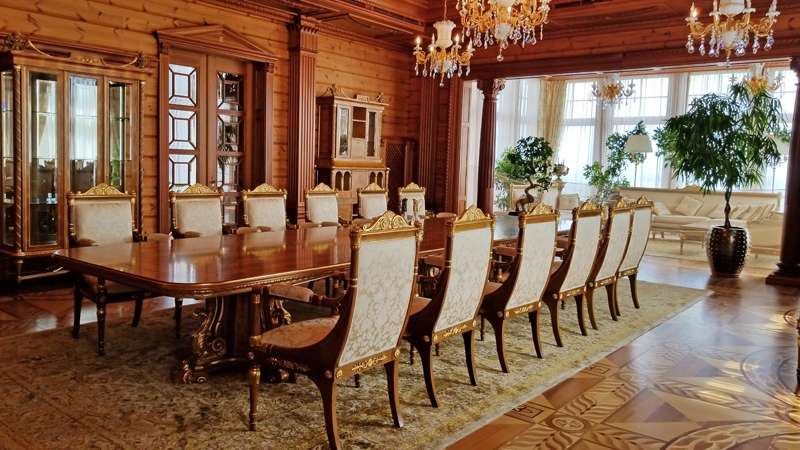 A conference room in The Mezhyhirya Palace–from 2002 to 2014, former President Viktor Yanukovych lived in the palace, which locals call “the Museum of Corruption”

The Mezhyhirya Palace, also known by locals as “the Museum of Corruption,” is the palace where former President Viktor Yanukovych lived from 2002 to 2014. Yanukovych’s outrageously decadent estate was originally founded as a monastery, which it remained until 1923 when it was closed by the Bolsheviks following the establishment of the Soviet Union.

Now, the estate is a state-owned museum, opened to the public in 2014 as a tangible testament to the excessive, lavish lifestyle of the former president.

Yanukovich fled to Russia during the Maidan Revolution in 2014. After he vacated the palace, the Activists of Automaidan took care of the residence and they prevented it from being looted until it was turned into a public park, owned by the state.

We spent the morning exploring the vast estate, which encompasses over 350 acres of artificial lakes and lush gardens on the banks of the Dnieper River. 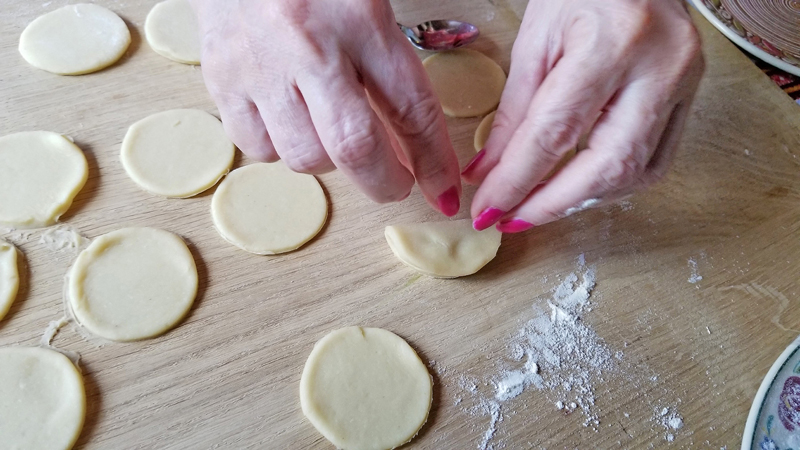 Take a class to make varenyky, also called pierogis in some regions of Western Ukraine, is a delicious experience; these traditional dough dumplings are filled with mashed potatoes and fried onions, minced meat, or pickled cabbage

Varenyky, also called pierogis in some regions of Western Ukraine, are traditional dough dumplings filled with mashed potatoes and fried onions, minced meat, or pickled cabbage. They can also be filled with fruit such as cherries and served with sour cream and honey as a dessert.

We took a cooking class in Kyiv to learn how to make varenyky. First, we were given a plop of dough made from flour, salt, butter, and evaporated milk, which we then kneaded and formed into a ball. After allowing the dough to rest for 30 minutes, we rolled it out into a thin, flat layer from which we cut three-inch circles.

We placed pre-boiled sour cherries in the middle, folded the dough in half, and then pressed the edges. The stuffed pastries were boiled for a few minutes and served hot. It was a delicious and fun experience.

A tour with an approved guide reveals the once-beautiful stained glass window of a hotel in Pripyat, which is within the Chernobyl Exclusion Zone

Without a doubt, the most memorable part of my visit to Kyiv was visiting Chernobyl, the site of the world’s worst nuclear disaster. With an approved guide, we were allowed to tour the Exclusion Zone, which includes the nearby ghost town, Pripyat.

I did a lot of research on Chernobyl before deciding to take the tour. General consensus is that short visits are safe, and there are actually some people who live full time and work within the 30 km zone. There are some hot spots, which is the reason why you can only enter with a certified guide and why they carry Geiger counters.

“The radiation here is less than you received on your flight 10,000 miles high, from the U. S,” said Nazar, our guide. He had a hand-held Geiger counter with him at all times and frequently took readings to assure us. On leaving the Exclusion Zone we had to pass through radiation detectors to make sure we had not picked up any radioactive material; none of us did.

Before the 1986 nuclear catastrophe, Pripyat was the pride and joy of Ukraine, which had high hopes for duplicating the success in other cities. Pripyat’s 50,000 residents reportedly enjoyed an income 40% higher than the rest of Ukraine because of the nuclear facility. Tragically, the city wasn’t evacuated until two days after the disaster.

Among the Chernobyl sites we toured were the abandoned amusement park, hotel, schools, and government buildings. The Kindergarten, especially, affected me deeply. To this day, the images of the cribs, disheveled books, and ruined dolls are accompanied by the stinging of tears in the back of my eyes.

As broken stained-glass crunched beneath my feet, and I had to sidestep puddles of standing water and other debris, I could not help but marvel that we’d never have access to such a destroyed place as Chernobyl in highly-regulated America. 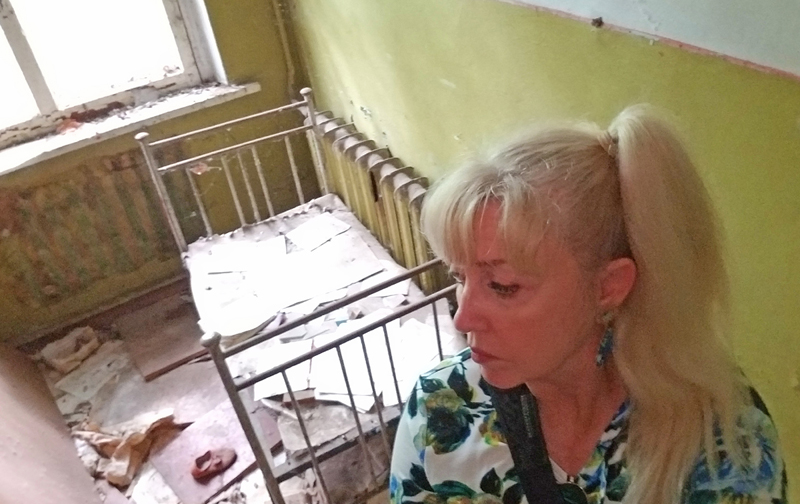 Touring the Kindergarten in the Chernobyl Exclusion Zone is a heart-breaker.

Disclosure: The author was the guest of JayWay Travel during her stay in Kyiv, but as always, the opinions, reviews, and experiences are her own.

Note: Seeking a way to help the people of Ukraine?

USA Today has published has a list of charities and other organizations that are working to help the people of Ukraine.

2/22 Update on Traveling to Ukraine

Afar has just published information on What Travelers Need to Know 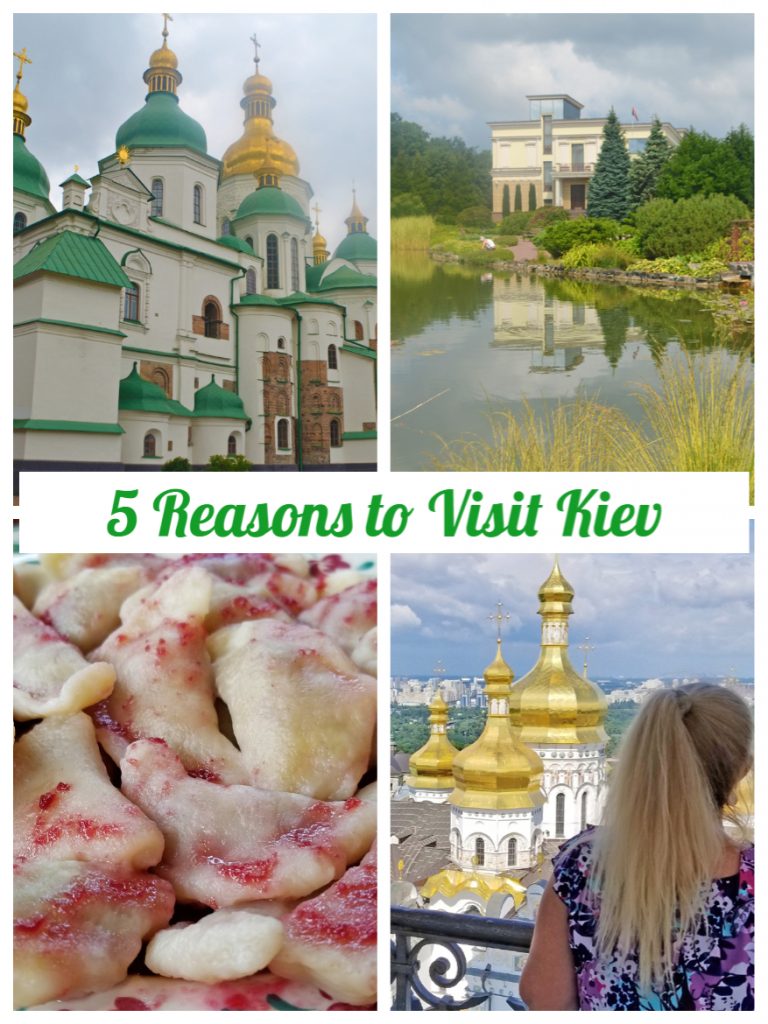