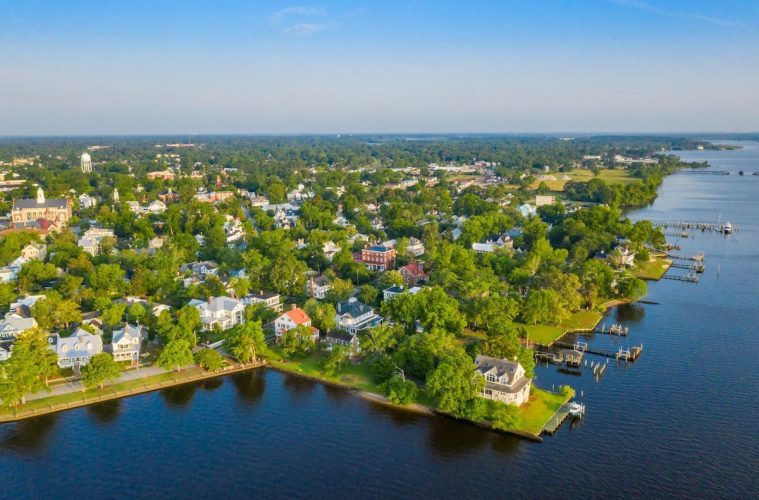 Things To Do In New Bern, NC: A Delightful Mix of Old and New

Wondering about things to do in New Bern, NC? How to spend a long weekend?

These questions were easy to answer, in part, because I (a co-author of this piece) once lived nearby and know the general lay of the land.

No, New Bern, NC is not named for me (Kathy Newbern) although it became a fun joke that turned heads during our stay.

Upon returning to New Bern, my husband and I found a much revived river city. Among the highlights:

We also discovered a revitalized downtown with plentiful boutiques and interesting spaces. And yet, New Bern’s historical identity remains intact. 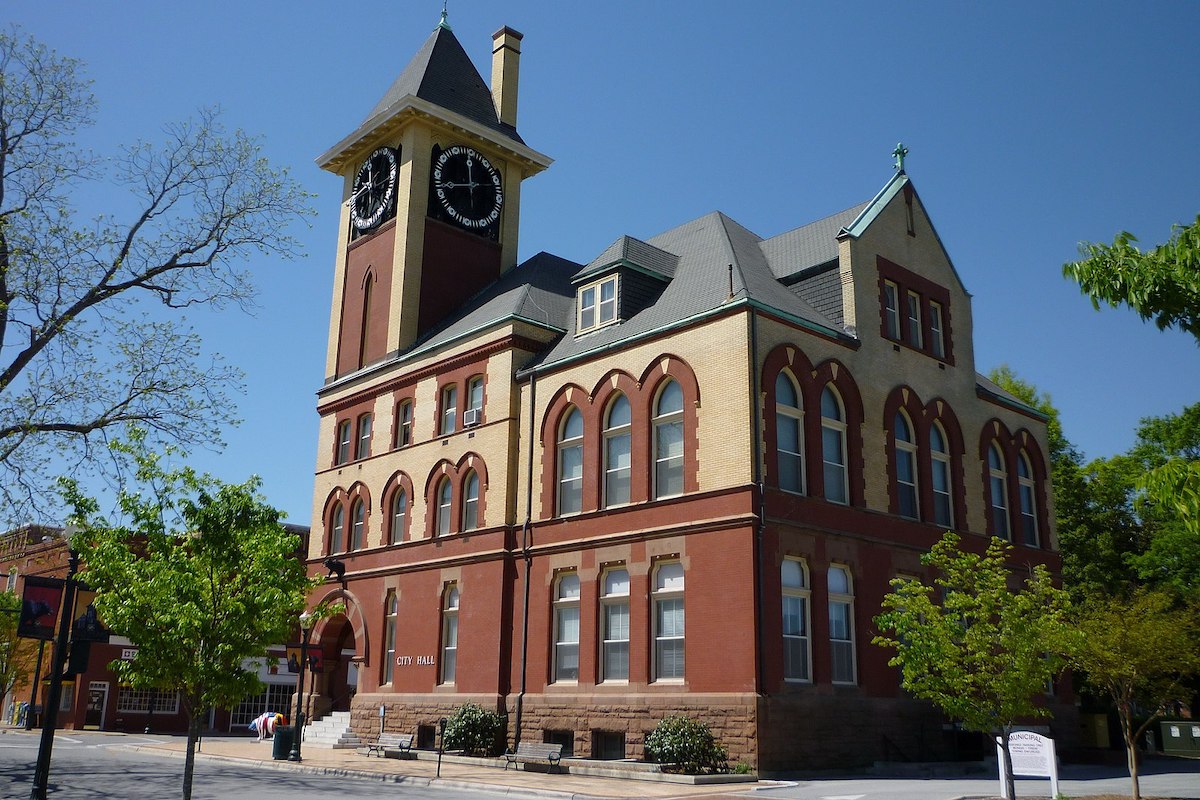 An eye-catcher is the Kress building, one of seven so-named in North Carolina. All are known for the Kress department stores’ ornamentation and inlaid floors. Nearby, we walked past an evening event just concluding at Bank of the Arts, a former bank turned into an arts center.

Speaking of the arts, we delighted in finding Next Chapter Books and Art, an independent bookstore specializes in local writers and artists.

Historic things to do in New Bern, NC

While arts, architecture, and the new developments caught our fancy, we couldn’t ignore New Bern’s must-sees: 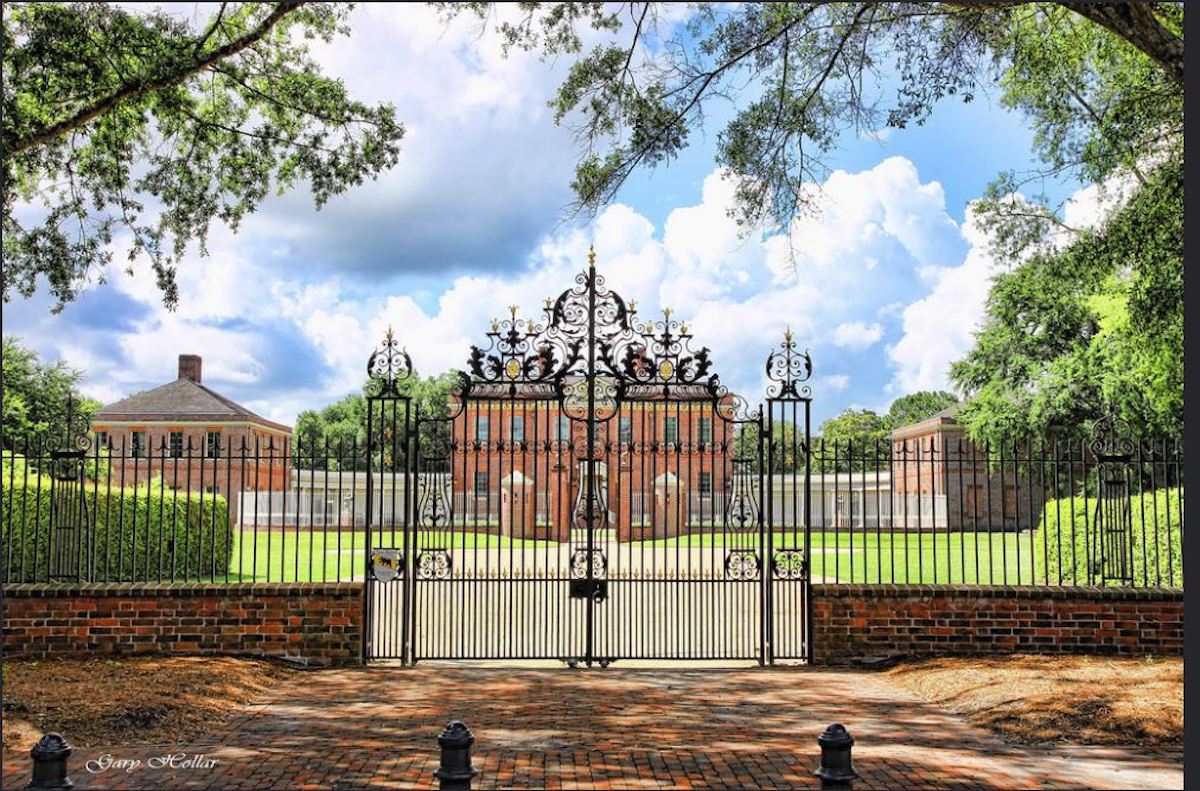 Outside, guests can stroll extensive gardens, one formal, another with native plants, yet another for cooks’ cuttings.

The Palace burned in 1798, yet the move to replace it didn’t happen until 1945. Remarkably, the original architect’s drawings existed. Archaeological evidence guided a $3.5 million exact reconstruction on the newly discovered original foundation. The public welcomed its 1959 reopening.

Visiting the birthplace of Pepsi 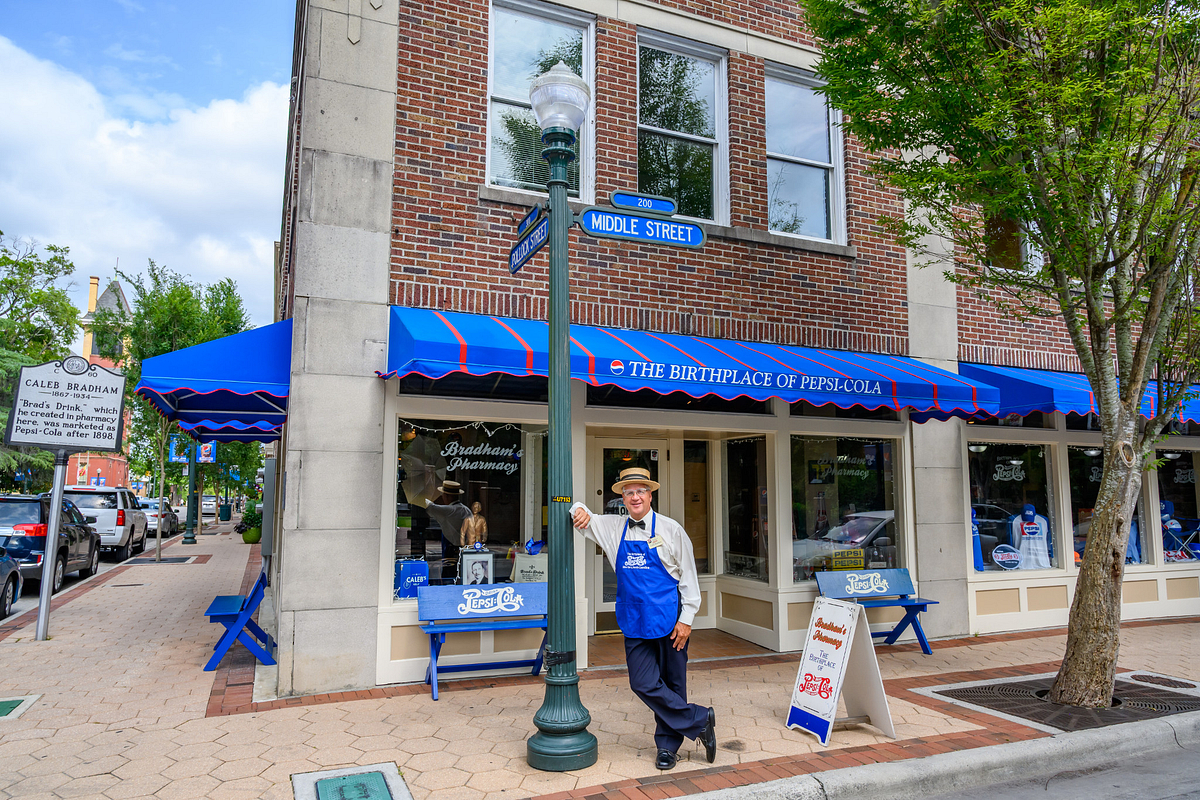 New Bern’s nickname is the Birthplace of Pepsi-Cola, as the popular drink was invented here.

The old-timey soda fountain serves the beverage in three cup sizes. And it offers free popcorn. Die-hard Southerners only order the bottle version, and then they drop salty peanuts into it. In addition to Pepsi, the shop offers an abundance of souvenirs and historic photos.

Established in 1955, The Firemen’s Museum is the city’s second most visited attraction after Tryon Palace. It’s a great destination where visitors of all ages can learn about the history of firefighting in New Bern, including the Great Fire of 1922 that destroyed more than 1000 buildings.

A 90-minute historic trolley tour took us past the still-operating 1802 Masonic Temple and Theater as well as other architecturally interesting buildings in the city.

Fun on the water in New Bern 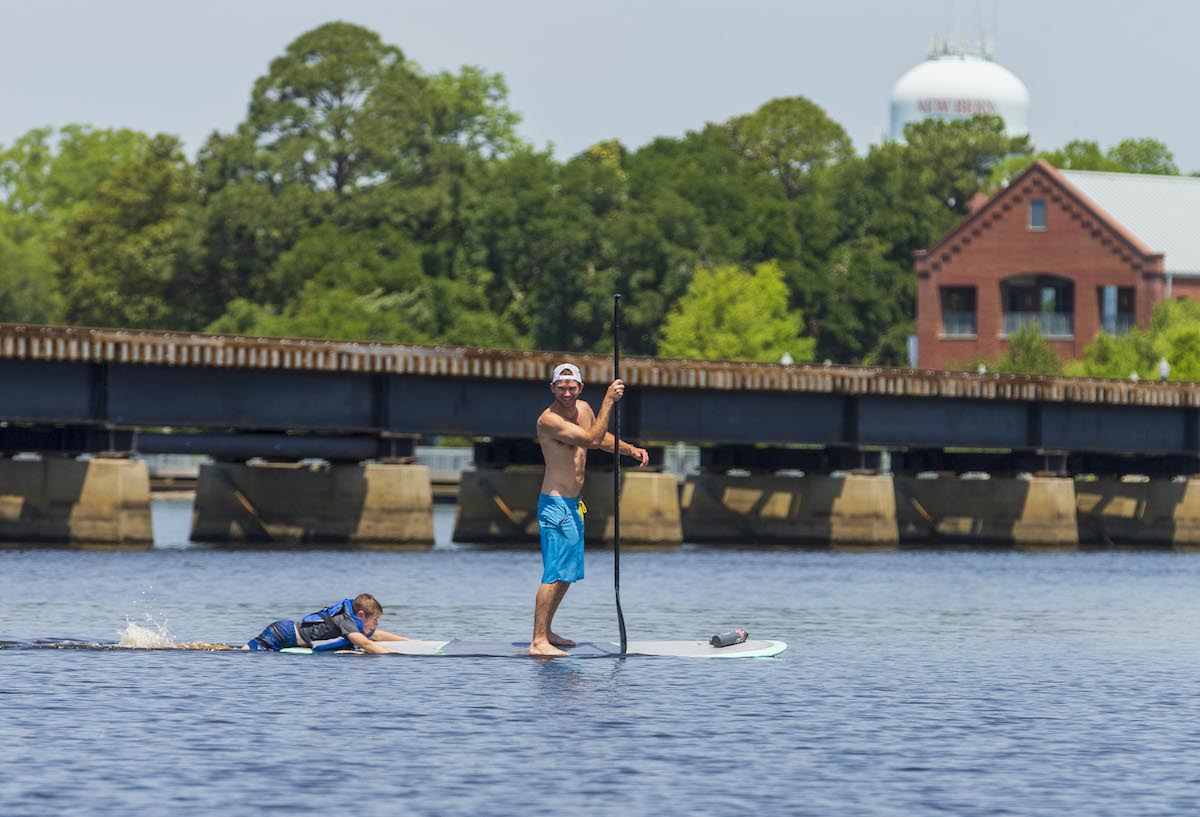 Don’t miss the chance to get out on the water. T&G Motorsports, operated by two entrepreneurial brothers, offers jet skis, boat rentals, a Wake Boat, Tritoon rentals (similar to a pontoon but with three hulls) and nearly everything else for the solo thrill-seeker from wakeboards to kneeboards to tubing and skis.

Close to sunset, we boarded their Tritoon for a private cruise. Perfect weather and a breeze set the mood as we pulled from downtown’s busy marina docks into a quiet, watery world. 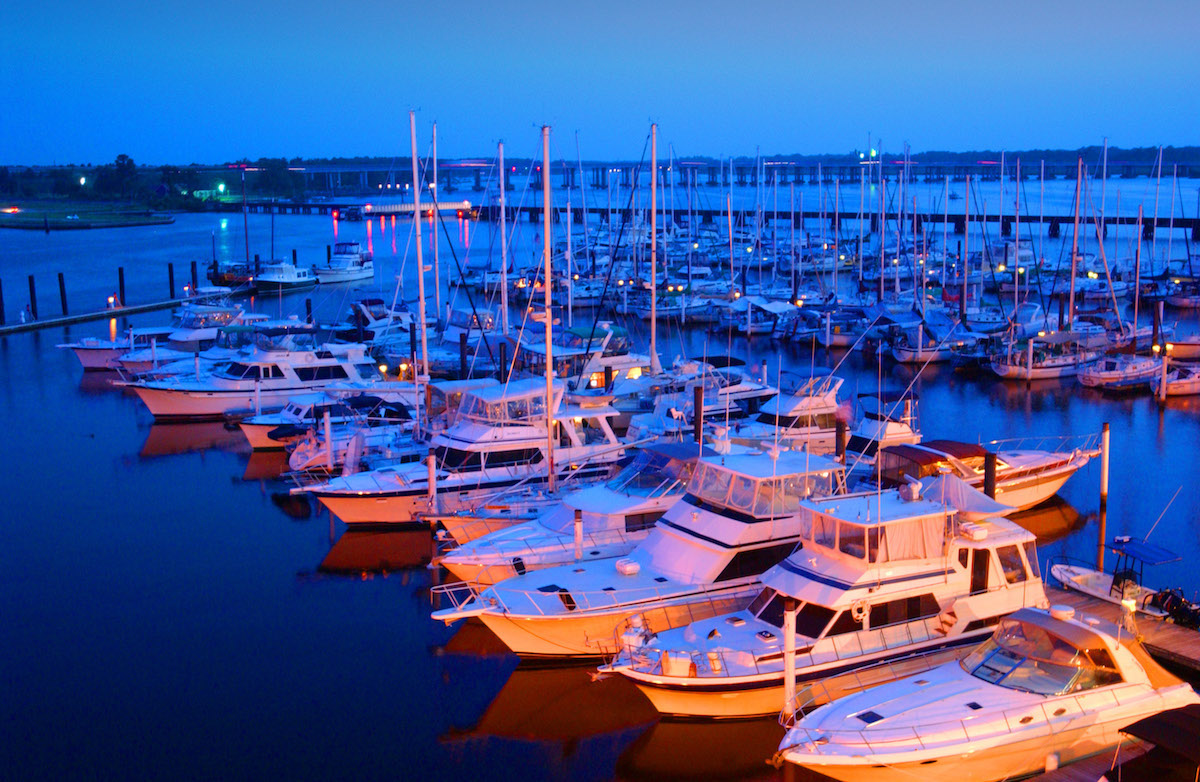 Romantic view of a line-up of yachts in New Bern (credit: VisitNC.com)

We sped under the Alfred Cunningham Drawbridge that stretches across the Trent River at the confluence with the Neuse.

Beyond the bridge, the pace slowed down as we focused on homes on both sides of the water.  Our Wow! moment was spotting the mega-mansion of novelist Nicholas Sparks. An online photo of the 24,000-square-foot home labels it “The House that Ryan Gosling Built,” referring to Sparks’ first breakout hit novel, The Notebook, and the blockbuster movie that followed, starring Goslin.

North Carolina’s official tourism site touts a Nicholas Sparks self-guided tour; the New Bern leg highlights spots from three of his novels, A Bend in the Road, The Wedding and The Notebook.

Where to stay in New Bern 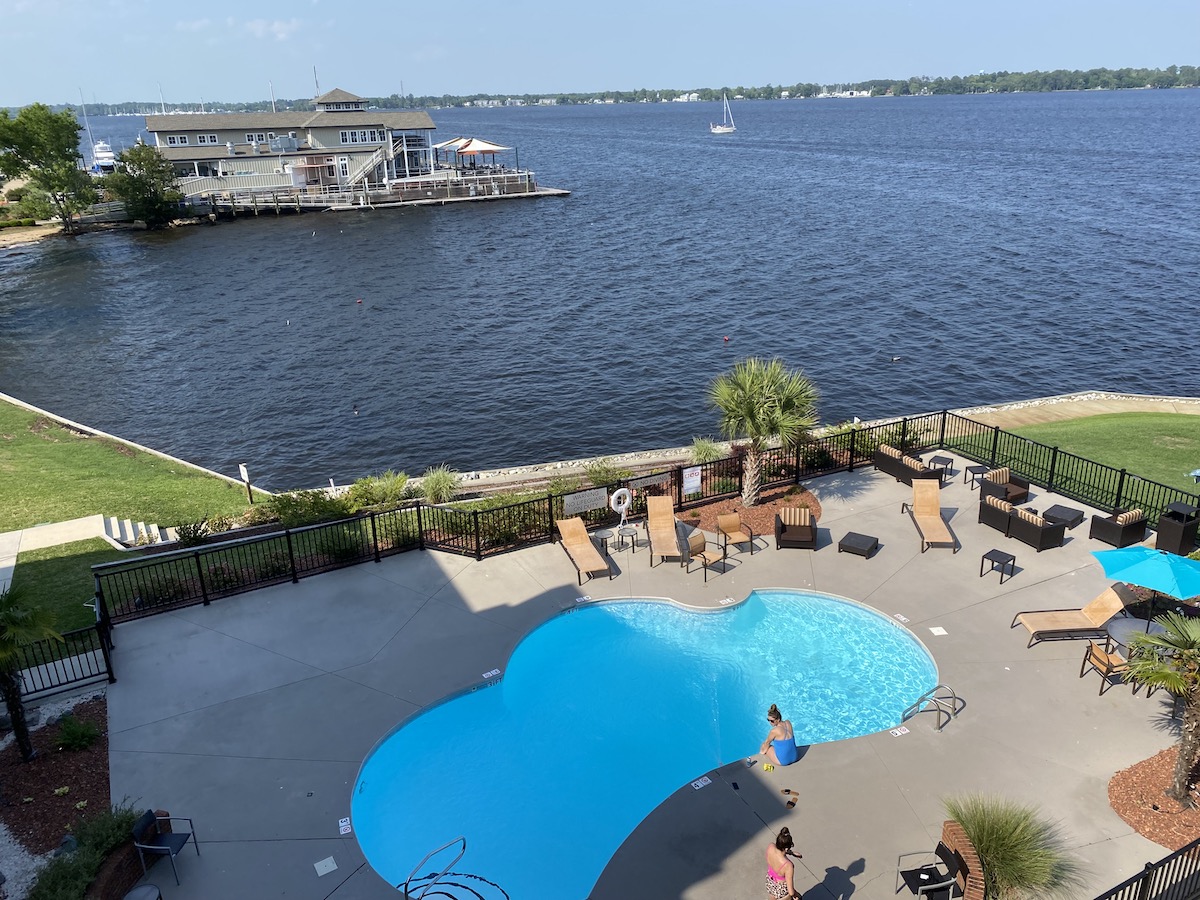 Riverfront pool at New Bern’s Courtyard by Marriott, with the over-water Persimmons Restaurant in the distance (credit: Kathy Newbern)

Our waterfront accommodations at Courtyard by Marriott on Front Street provided a good location from which to explore downtown and adjacent Union Point Park, where the town’s two rivers meet.

Some of New Bern’s charming B&Bs include The Jarvis at 220, Hanna House, Meadows Inn, Aerie, and Benjamin Ellis House B&B. There are good options, too, for private home or condo rentals. 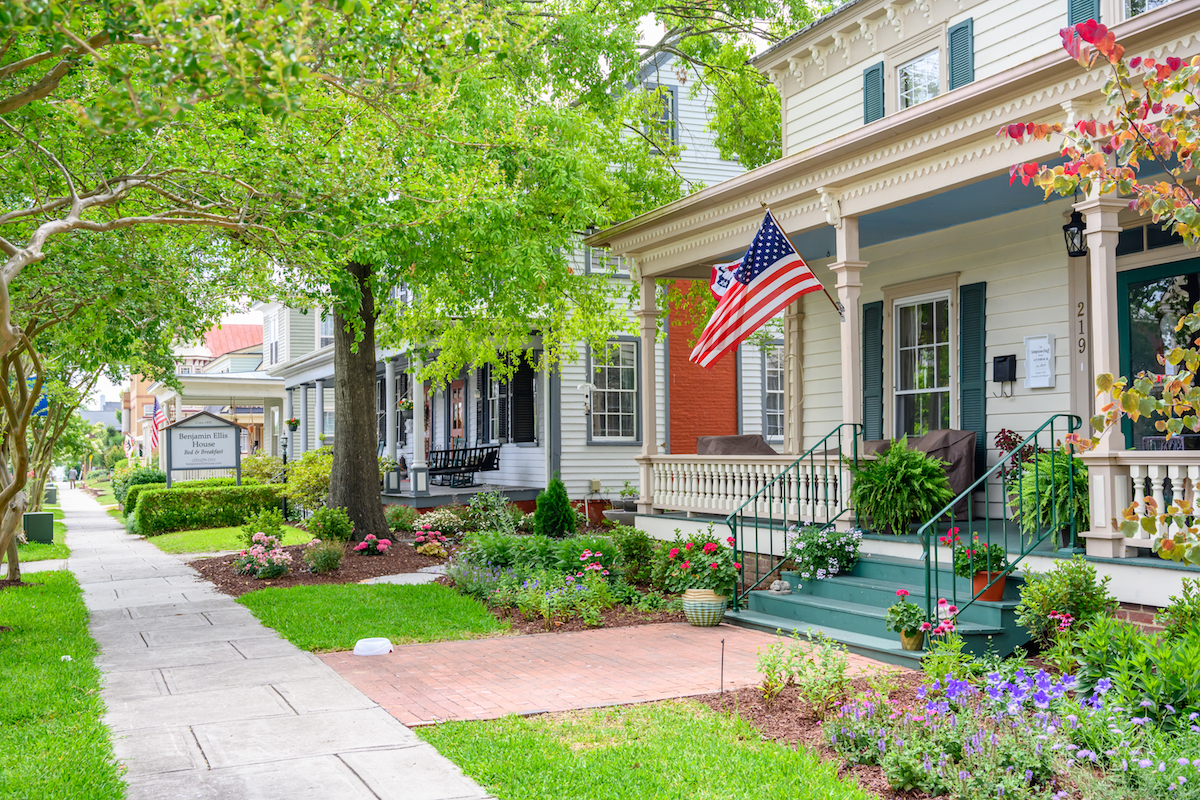 Among our reasons to return was a visit to the former Harvey Mansion restaurant, where Kathy fondly recalled long-ago upscale dining. We found The “Harvey” being transformed into a boutique hotel.

Another coming attraction: Noted Savannah hotelier Richard Kessler’s $2.25 million renovation of the 1908 Beaux Arts Elks Building into a 50-room boutique hotel slated to open in 2023. (We’ve stayed at two other Kessler properties, one in Charlotte and another in Savannah.)

Where to dine in New Bern 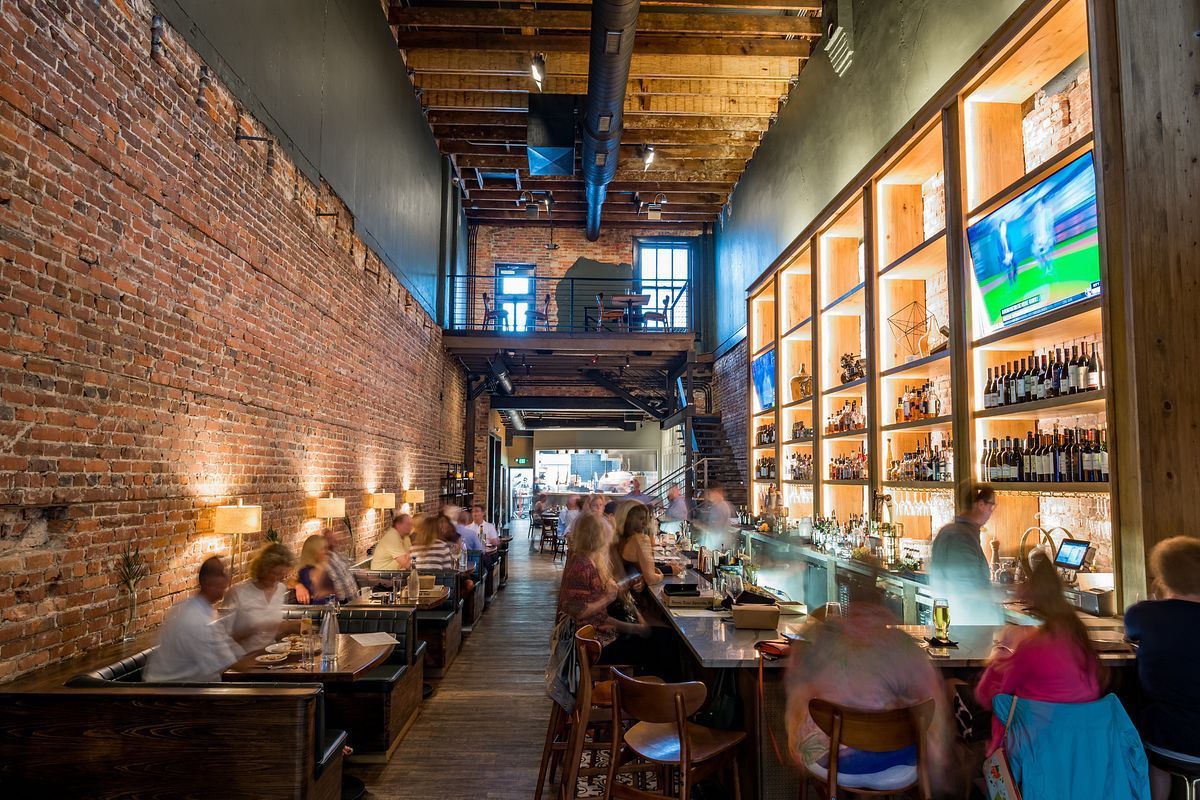 Persimmons Waterfront Restaurant attracts boaters and walk-ins not only for the view but “fin” or farm-to-table freshness. 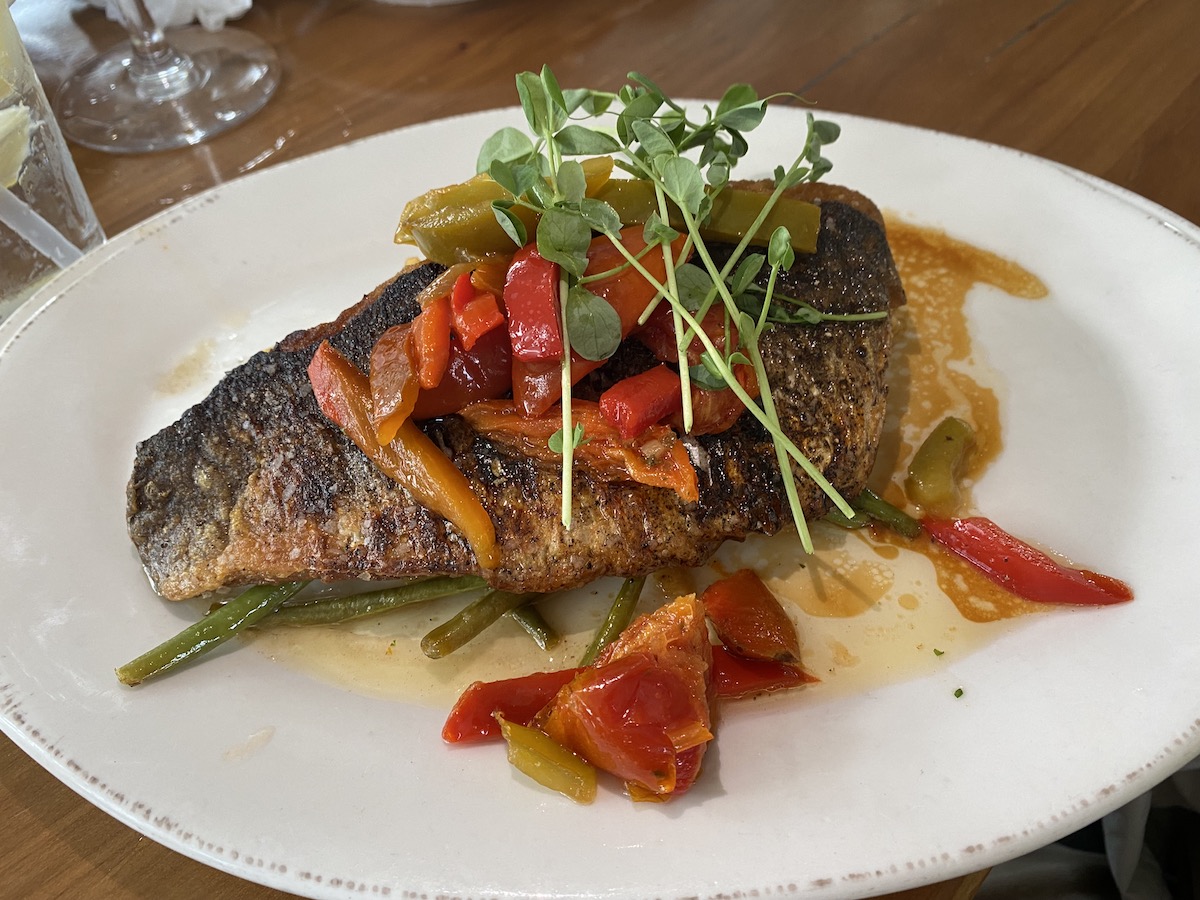 Crispy Sea Bass is just one of many well prepared entrées on the menu at New Bern’s Persimmons Waterfront Restaurant (credit: Kathy Newbern)

The Chelsea restaurant is located in a building first used by Pepsi’s inventor. He and other notables are featured in a large mural by the hostess stand. A 1990s restoration preserved the building’s original pressed-tin ceiling and mosaic tile floor.

Among the generously sized cocktails here, we sampled the Strawberry Basil Lemonade and the Pain Killer with rum, coconut cream, pineapple juice, orange juice and nutmeg.  Having printed menus under glass at the booth tables in the front dining section was a cute idea.

Rub elbows with the locals over breakfast at Captain Ratty’s and enjoy portions that’ll easily fuel your day. If you’re lucky, peach pancakes might be on the menu.

Packing for home, we reveled in now knowing all the things to do in New Bern, North Carolina and how the city has grown into a sought-after, near-the-coast getaway destination. 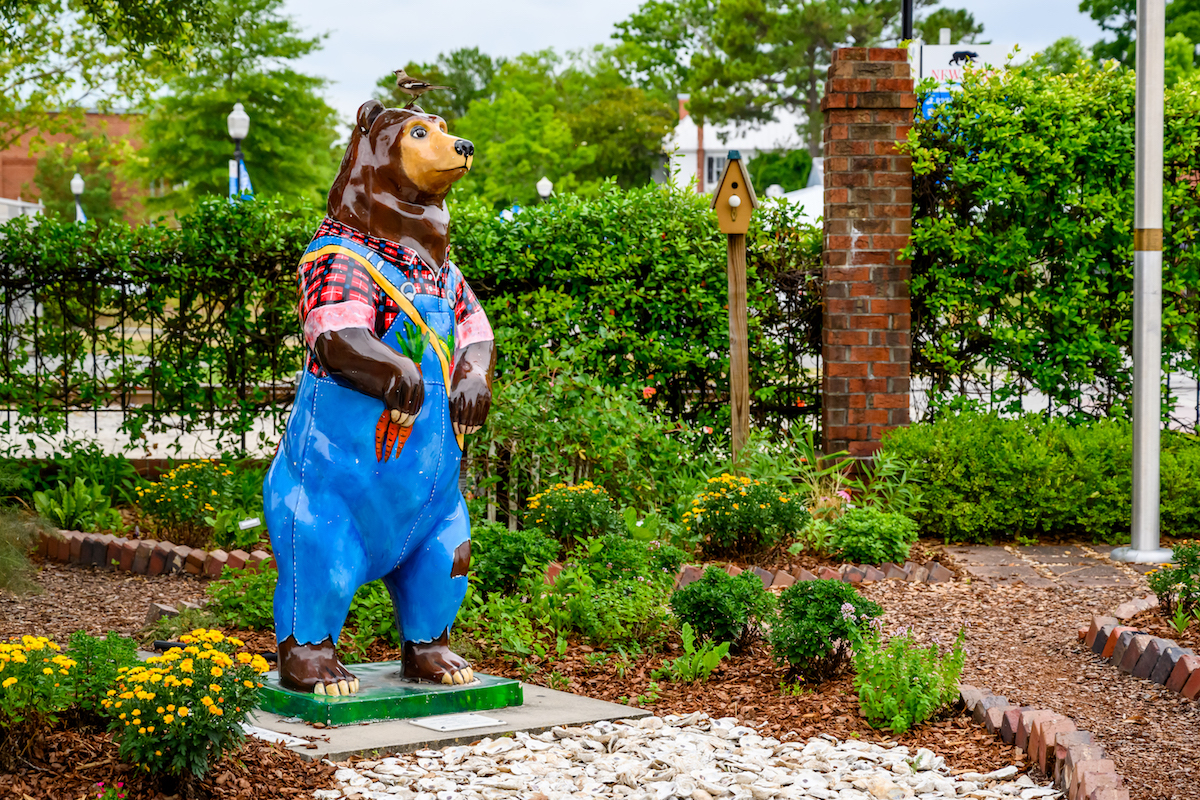 Harvest Bear, one of New Bern’s 80 decorated bears, is stationed at the downtown Farmers Market. Finding the 80 bears is one of the many fun things to do in New Bern, North Carolina. (credit: VisitNC.com)

Disclosure: The authors’ visit to New Bern was sponsored by VisitNewBern.com 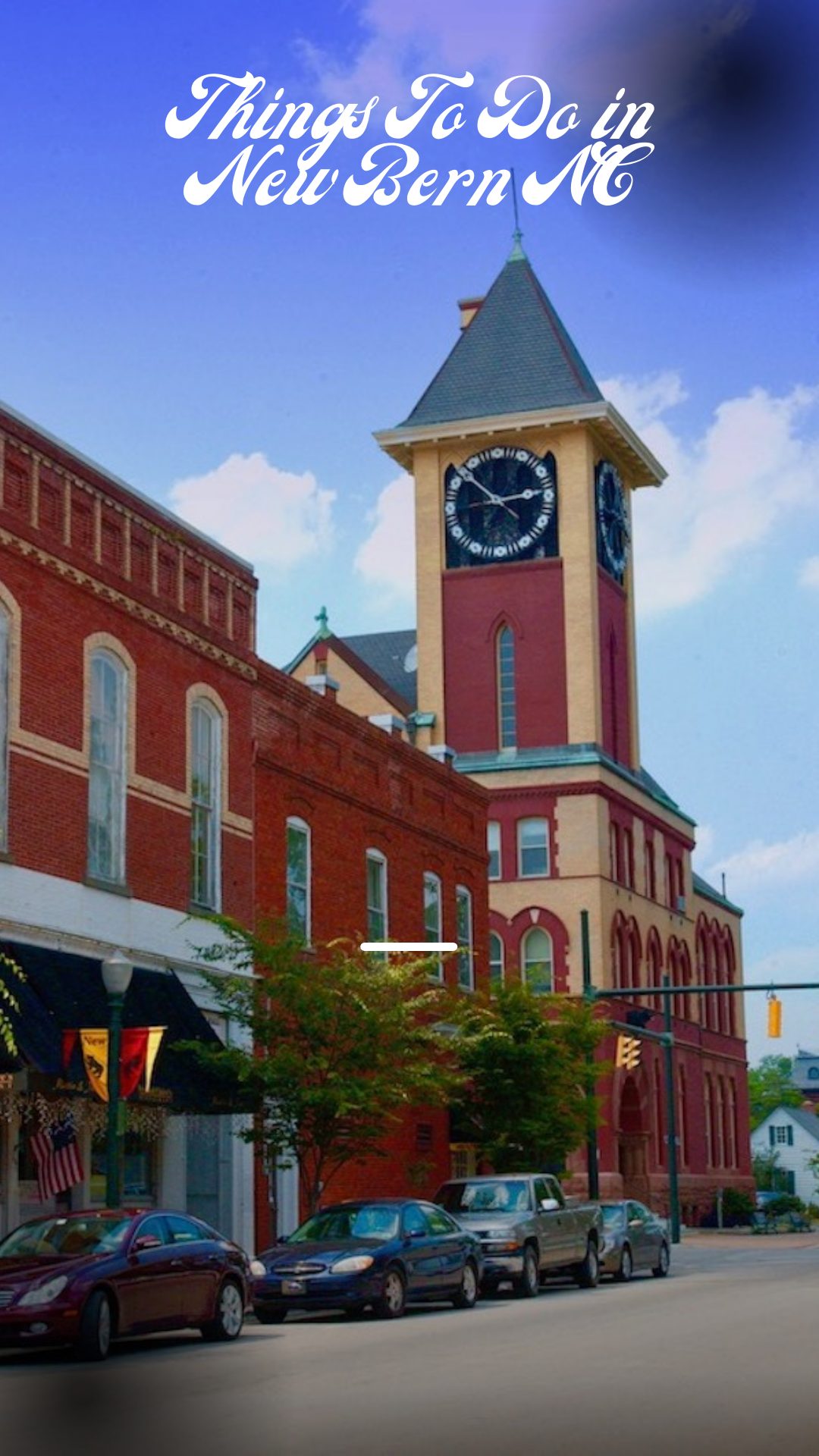