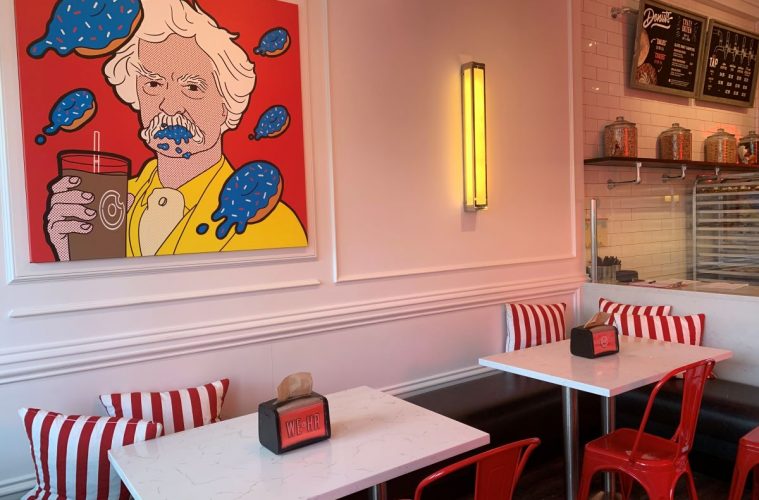 A Perfect Weekend in Hartford, Connecticut

An escape from one’s workaday world for a weekend is always enticing. It may mean leaving the hustle and bustle of the city that you love for some sort of bucolic paradise, or venturing to a metropolis should you spend most of your time in the country, or, in more contemporary speak, the exurbs. If you’re seeking a getaway from the New York City region, you might opt for a visit to Hartford, Connecticut.

About two-and-half hours away from NYC via Amtrak or auto, Hartford offers a little bit of city—museums, good shopping, some cultural activities—with a pace somewhat slower than that of Manhattan.

What to do in and near Hartford

On my first getaway to Hartford, Connecticut, what little I knew of this metropolis in the Nutmeg State metropolis centered on insurance. Hartford, founded in the 1630s, somehow became the “Insurance Capital of the World,” although that particular characteristic is not what drew one very famous author to the area. Samuel Clemens, who wrote under the pen name “Mark Twain,” was drawn to Hartford, Connecticut, because of its publishing industry.

Born in Missouri, Twain actually worked as a riverboat pilot on the Mississippi River for several years until the Civil War broke out, limiting river traffic. Twain went on to have a couple of careers and many adventures before landing in Hartford with his wife and family in the 1870s.

Readers who grew up on Mark Twain and his well-known characters, Huck Finn and Tom Sawyer—books, films, and Disney theme park versions—might make the Mark Twain House and Museum, his manse on Farmington Avenue in Hartford, their first stop. 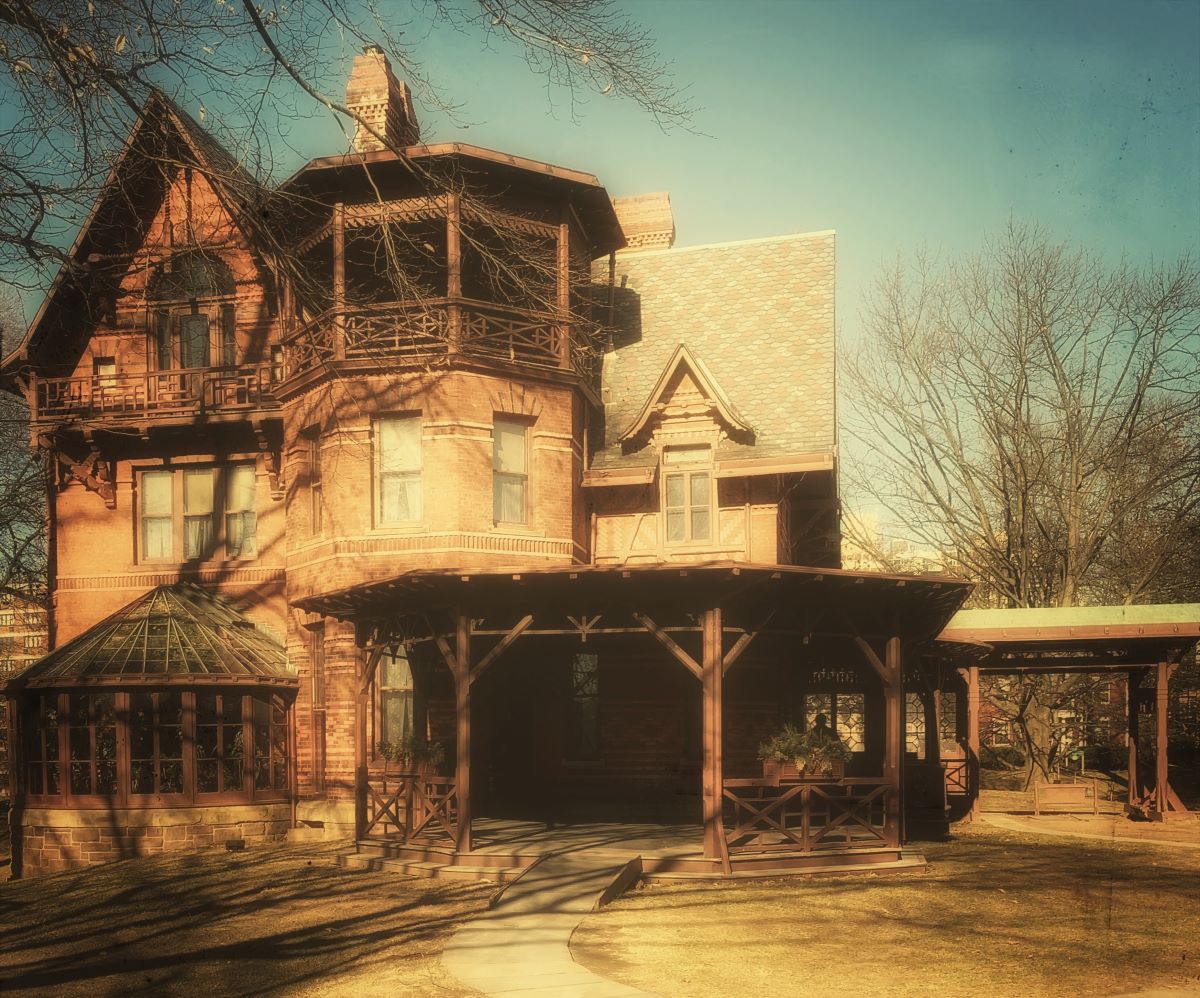 Where the magic happened: at the Mark Twain house in Hartford, CT

Some tourists today might not be so familiar with Twain’s works given changes in school curricula over the years. The Adventures of Tom Sawyer and the similarly named Adventures of Huckleberry Finn are not necessarily assigned reading anymore. Nevertheless, the Mark Twain house is worth visiting even for those who would not describe themselves as literary tourists. I enjoyed peeking into lifestyles of the well-to-do in this historic house that still looks much as it did in the late 1800s.

More background on life and work in Mark Twain’s time is accessible in the far more contemporary museum and visitor center through which travelers enter. Environmentalists will be pleased to learn that the new building was the first museum to receive LEED certification in the United States.

After touring the Mark Twain house, head to the Harriet Beecher Stowe Center, which is conveniently next door. Twain and Beecher Stowe were contemporaries, friends and neighbors. Both authors’ works are now controversial: Twain because of the dialects he wrote in and Beecher Stowe because of racial stereotypes included in her book, Uncle Tom’s Cabin. At the same time, both writers opposed slavery—if not always in ways that we would like them to have. A visit to the Harriet Beecher Stowe Center provides insights into the times and varied ideas about race relations.

Stop in at the Wadsworth Atheneum Museum of Art

For more art and history in Hartford, go to the Wadsworth Atheneum Museum of Art, the oldest continuously operating public museum in the United States. Founded in 1842, it opened to the public two years later. From February 1 through April 30, 2020, Rembrandt’s Titus in a Monk’s Habit (1660) will be on view at the Atheneum, on loan from the Rijksmuseum in Amsterdam.

From Feb. 29 through May 25, 2020, an exhibition titled Savor: A Revolution in Food Culture explores changes in eating habits in England and France between 1650 and 1789 when the French revolution began. It turns out that the whole “farm to table” concept is not entirely a recent movement.

Take a detour to the New Britain Museum of American Art 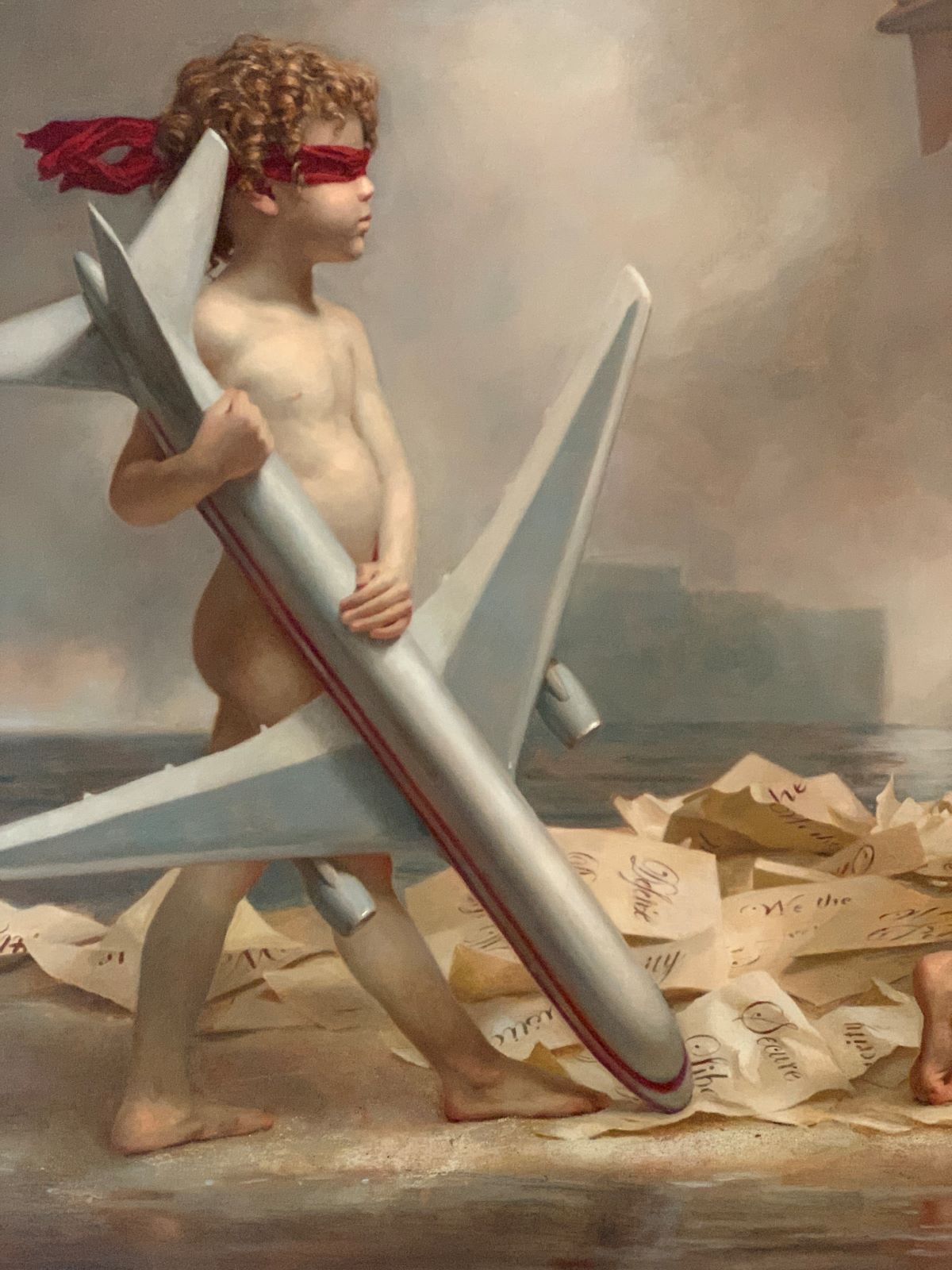 I found Graydon Parrish’s allegorical painting, The Cycle of Terror and Tragedy: September 11, 2001, to be quite moving. This vast work is only on display for about four months every year, beginning on the anniversary of that fateful day for the United States. Should you be at the New Britain Museum of American Art when it’s showing, take care not to breeze right past it. The painting is housed in a lecture hall on the first floor of the museum. On a lighter note, have fun seeking out the Jackson Pollock work on display.

Exit the New Britain Museum of American Art and stroll through the bordering Walnut Hill Park. Designed by Hartford native Frederick Law Olmsted, the same fellow who designed New York City’s Central Park, Walnut Hill earned a designation on the National Register of Historic Places in 1982. A towering Art Deco World War I monument is hard to miss, but visitors might also appreciate a salute to women and their contributions during wartime that is located on the grounds near the monument. 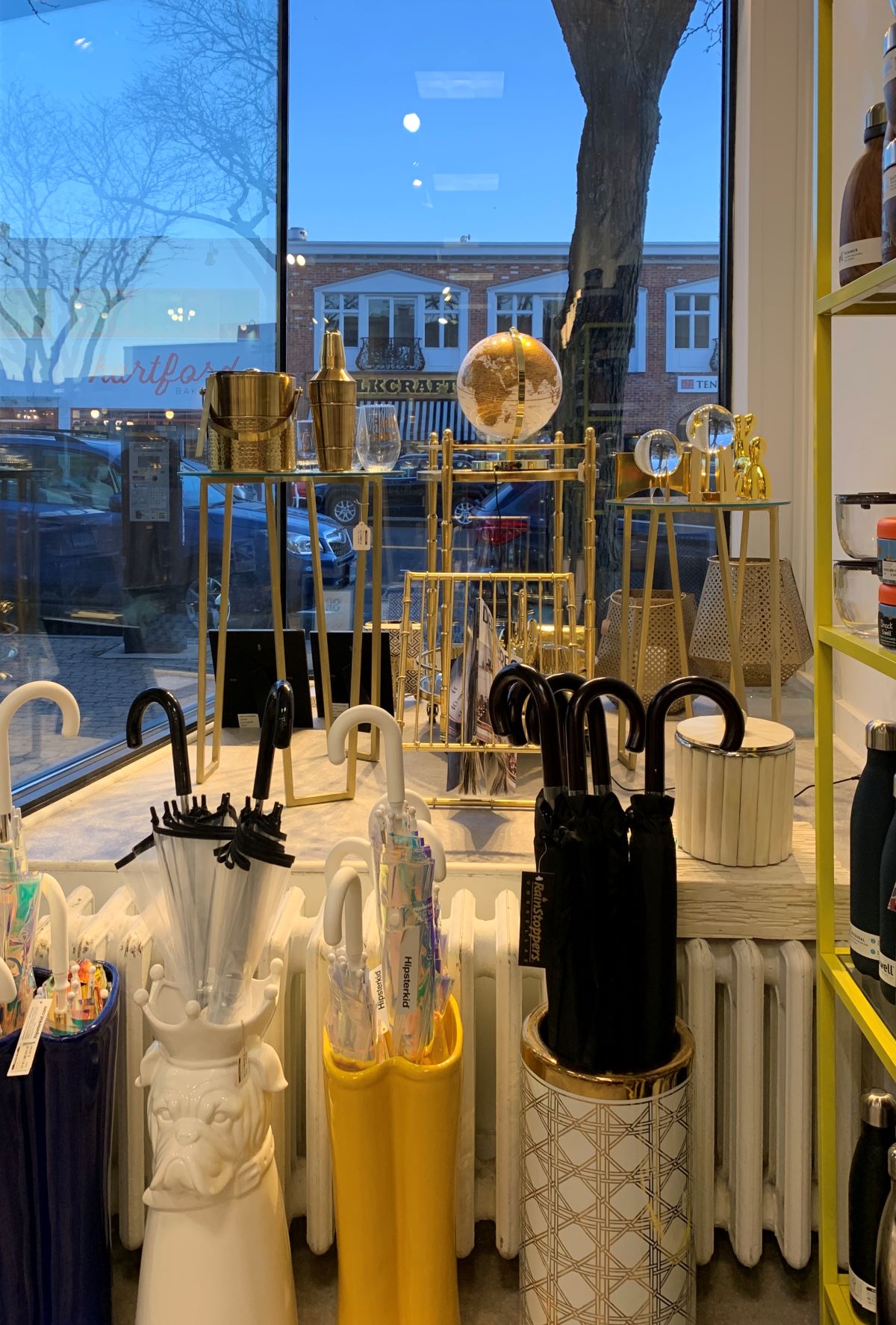 Ready for some retail therapy? Head to West Hartford, once part of Hartford and now a town all on its own. Indulge in some window shopping in West Hartford Center. I like the great service at Kimberly Boutique, which offers women’s clothing, and the attached Kimberly Gift.

If it’s time for a book or a beer or both, head to Blue Back Square’s vast Barnes & Noble and the also impressive World of Beer.

Start a day off with a bit of indulgence at the aptly named Donut Crazy in West Hartford, about five miles west of downtown Hartford. Flavors like apple pie, or maple bacon, as well as the hostess entice those in need of a sugar fix.

In the mood for bubble tea? Get some at Maruichi Japanese Food.

Those looking for something more substantive might try Artisan West Hartford in the Delamar hotel. Its tavern offers casual dining, but I prefer the grace of the more formal main dining room. Make reservations!  This is a popular destination.

Menus change seasonally at this farm-to-table restaurant. On my visits, I enjoyed baked oysters, lobster sliders, and arancini balls in the tavern; a delightful cauliflower-celery soup of the day at lunch, and spicy lobster fra diavolo for dinner. Yes, you’re likely to want to go back to this restaurant again and again. 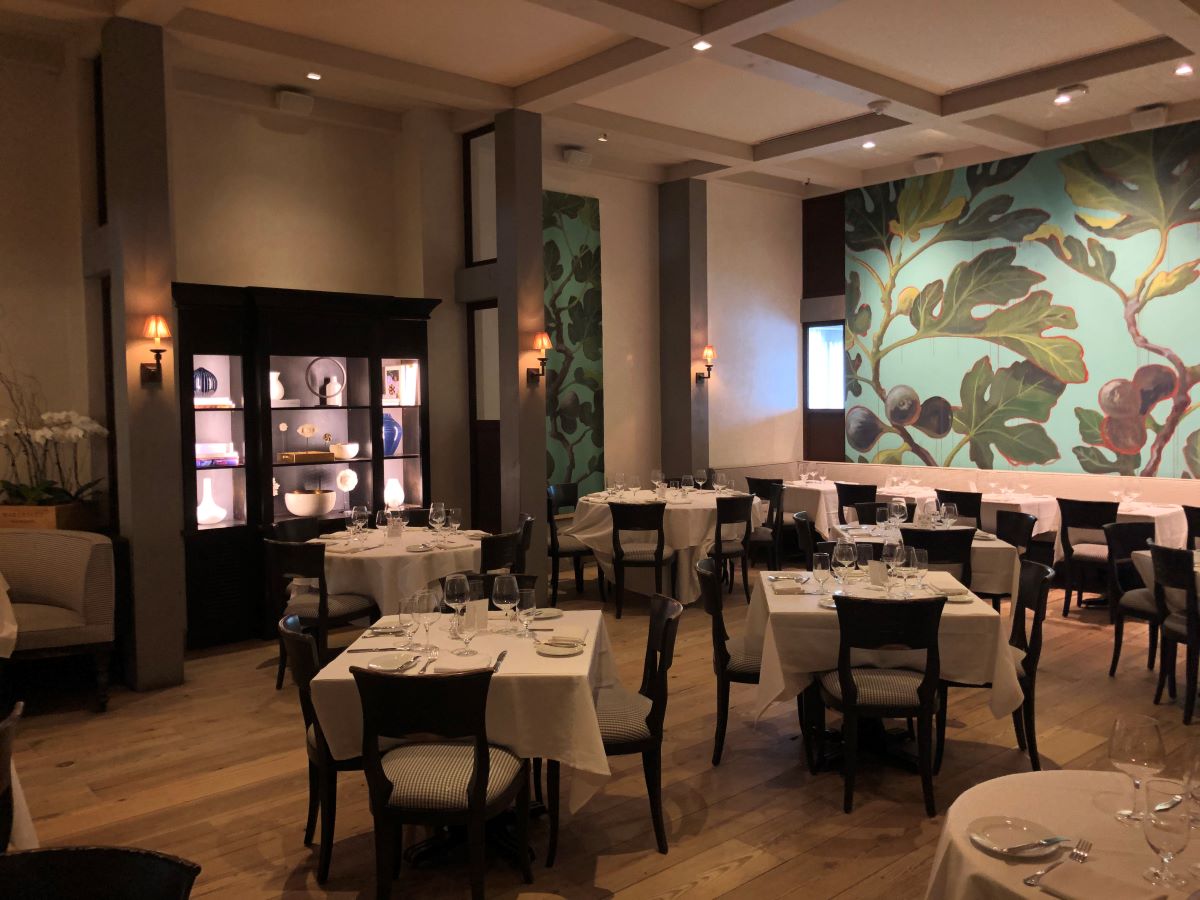 Staying at the Delamar in West Hartford

A convenient and alluring hotel to stay in during a Hartford getaway is the relatively new Delamar West Hartford. What I like about it: the fun and original art found throughout this hotel built to the LEED Gold Standard, the spacious lobby replete with fireplace and seating well-suited to coffee drinking and people watching, service that felt personalized even during a weekend when three wedding parties happened to be in residence, and the quiet of my room at a busy time.

Even more fun was taking a ride in one of the house Tesla cars. Free transportation within a five-mile radius is offered to hotel guests (on an as-available basis, but we had no difficulty arranging for a ride during our stay). We made time for massages in the hotel spa on our last day for the perfect ending to a quick weekend away. 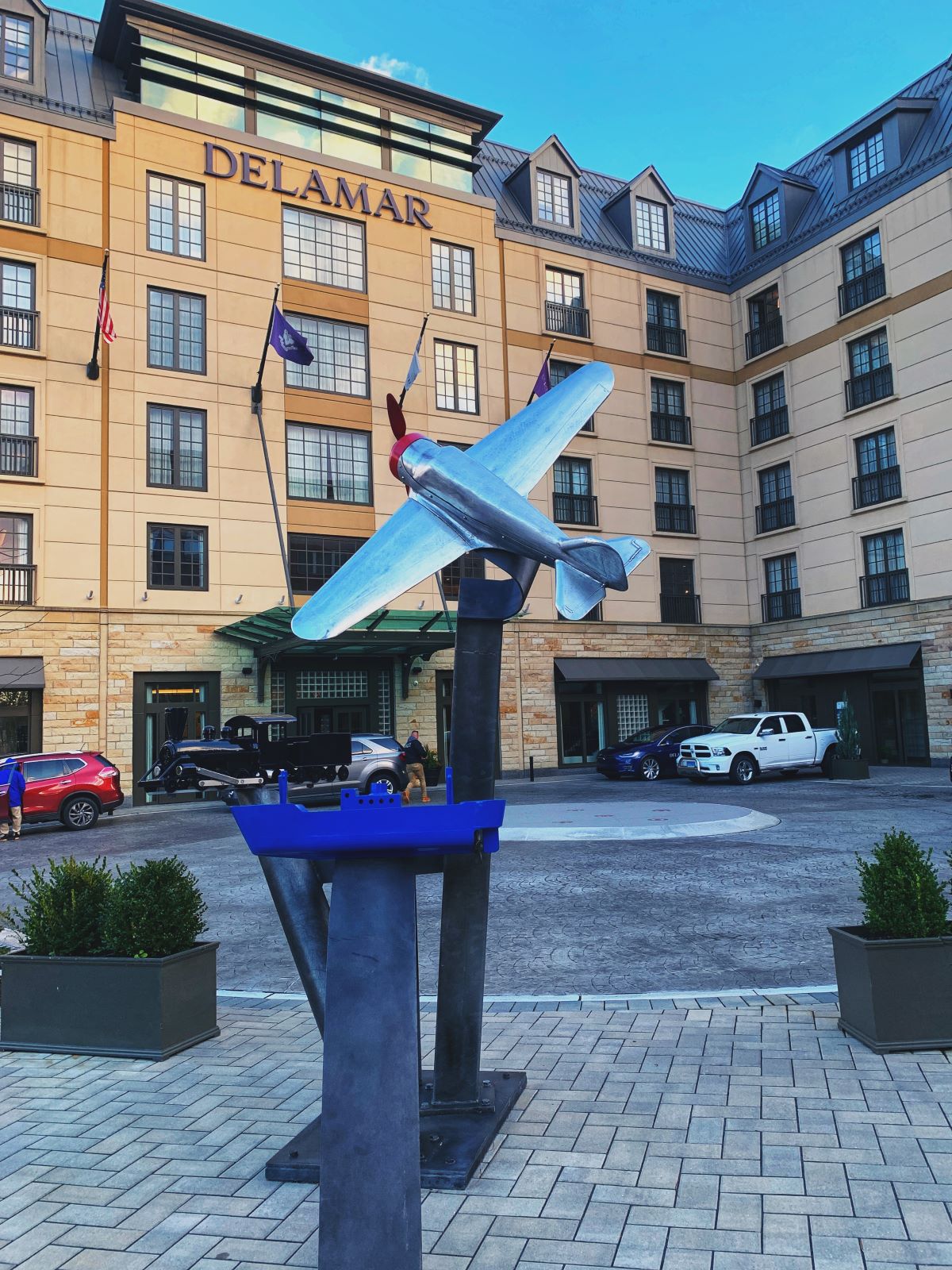 Disclosure: The author’s visit to Hartford was hosted in part by the Delamar West Hartford 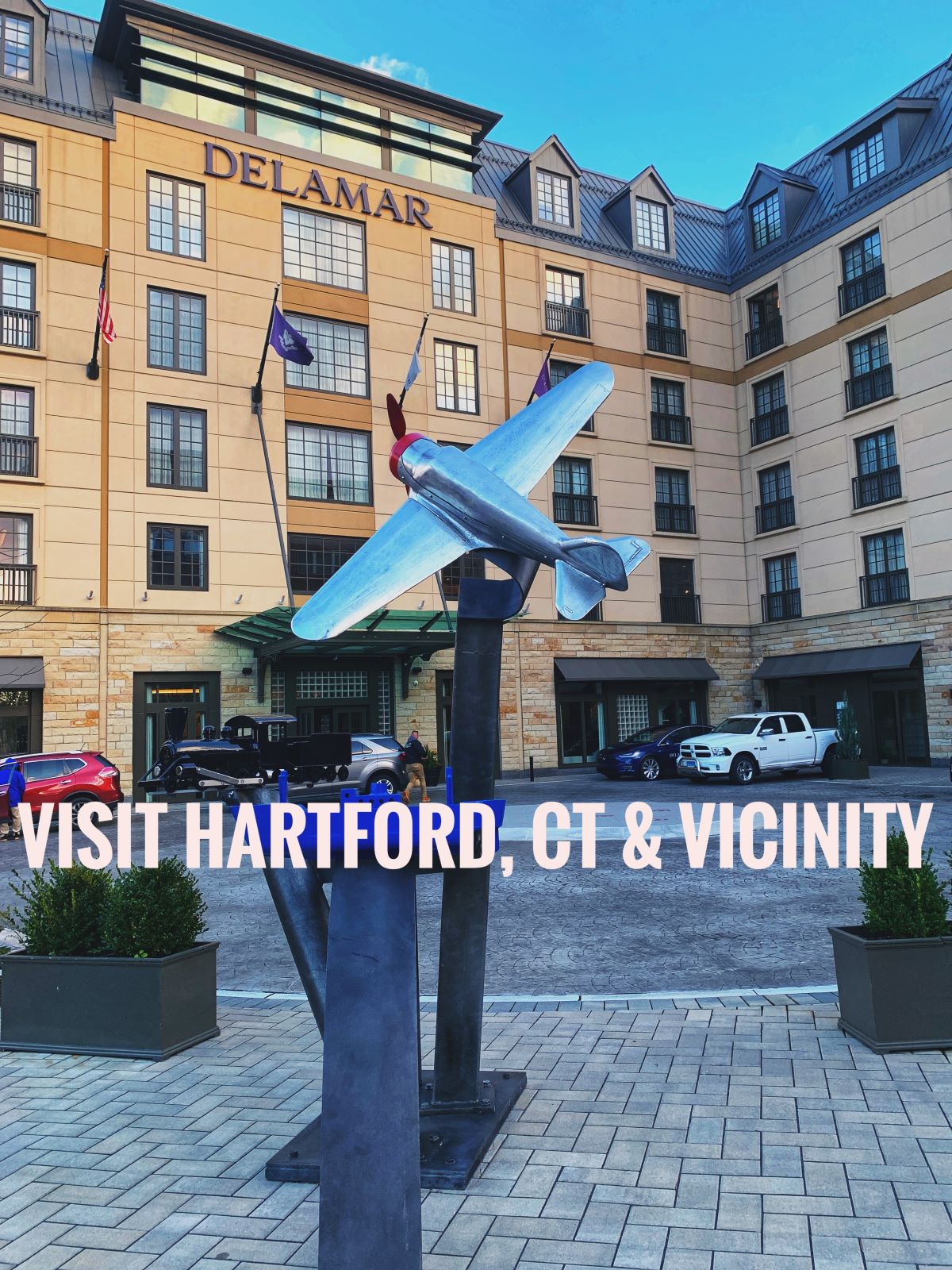