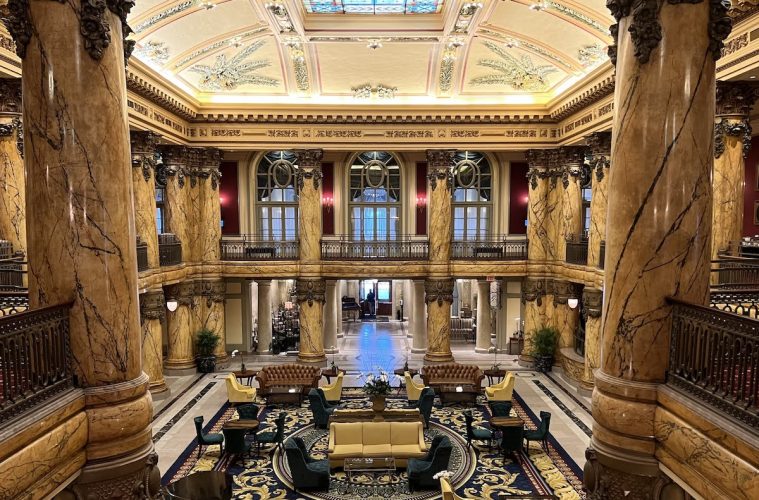 A few months before our road trip, my daughter had reminded me that our Richmond, Virginia, stopover would fall on her birthday. She suggested we book a spa day to celebrate. Doing so would offer us a peaceful respite after a long drive as well as a chance to rejuvenate with a massage and facial. She found The Jefferson Hotel, which offered an in-house day spa. We booked a two-night stay. 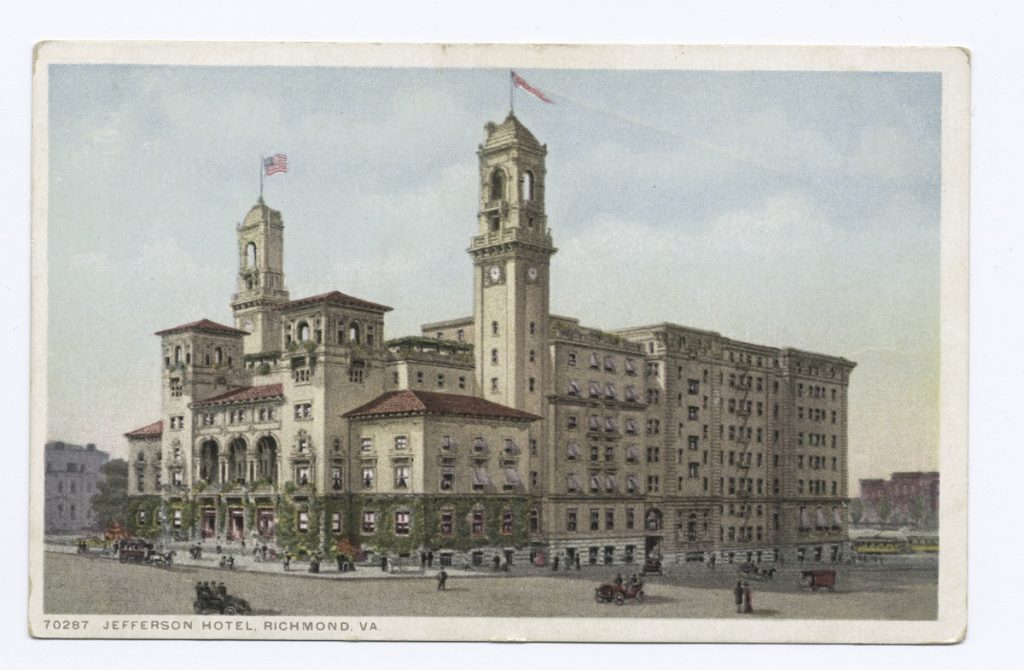 The Jefferson Hotel Richmond in the early 20th century (Wikipedia)

Pulling into the hotel’s circular driveway, we weren’t sure what to expect. While the outside was unassuming, upon entering, we felt like we were transported into the Gilded Age.

We hadn’t realized that the building was a historic landmark and that The Jefferson Hotel Richmond is among the most historical travel destinations in the country. OMG, what a birthday surprise!

Our eyes were aglow, looking up at the 35-foot ceiling of The Palm Court lobby with its circular-stained glass dome above a life-sized replica of Thomas Jefferson. 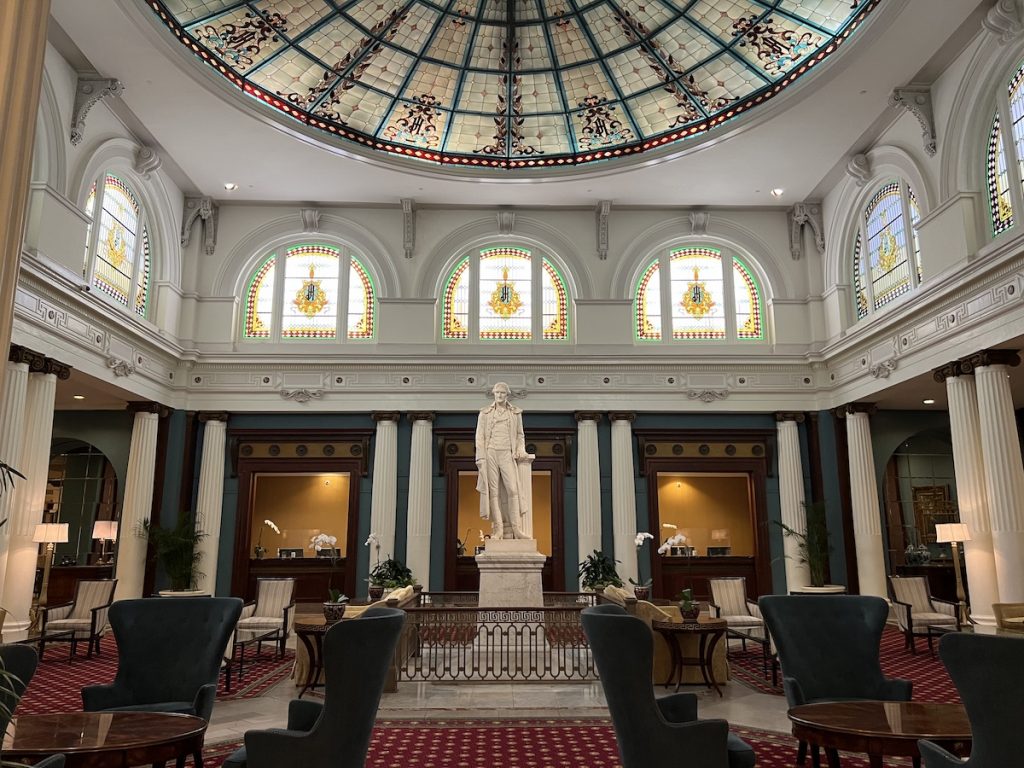 This year, The Jefferson Hotel has been awarded a Forbes Travel Guide Five-Star Rating – ranking it as one of the finest properties in the world.

Before heading to our room, we wandered down the grand staircase to see The Jefferson Rotunda. It was impressive, with a 40-foot ceiling covered with a massive stained-glass skylight, shiny marble floors and huge marble columns.

Living it up: A guest room fit for two queens 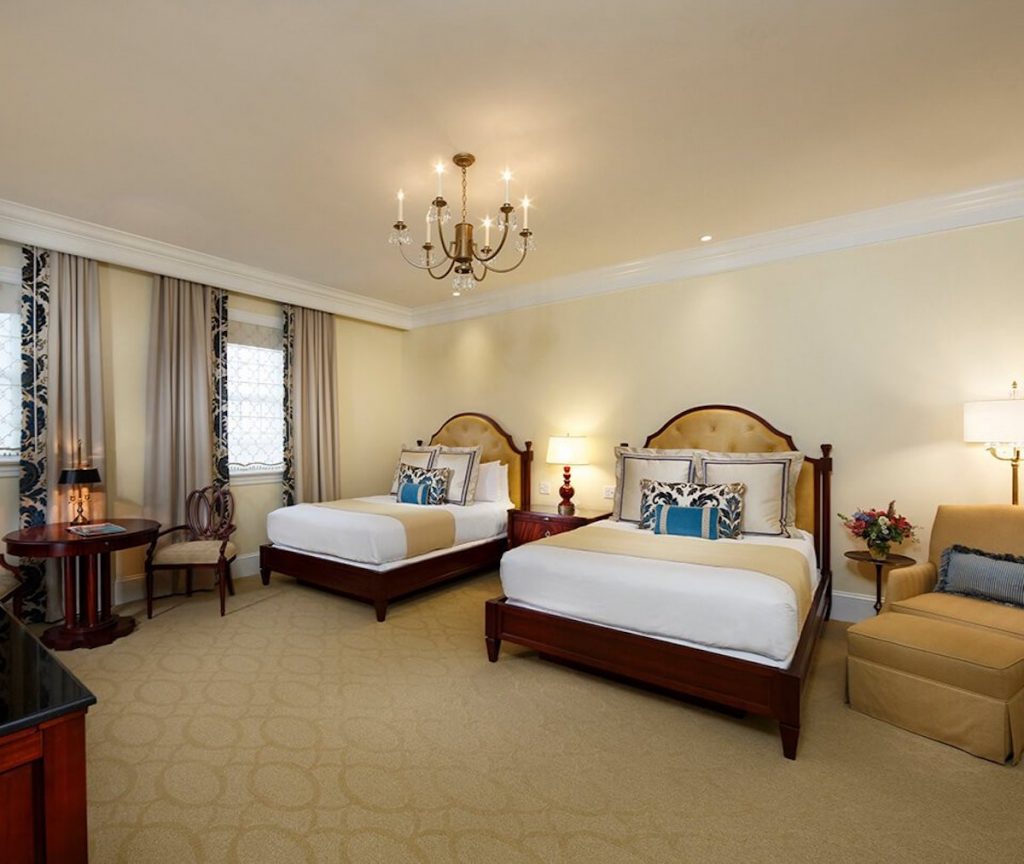 Our Grand Premier Room was like a luxury downtown apartment. “This is huge,” my daughter said as we stepped into the guest room foyer.

The table in the corner near the windows was perfect for in-room dining. As was the view, which looked out on downtown Richmond. While we didn’t have much to unpack, the spacious dressing area provided extra space to store our luggage.

The pièce de resistance was the beautiful marble bath. I love soaking tubs and couldn’t wait to use this one. 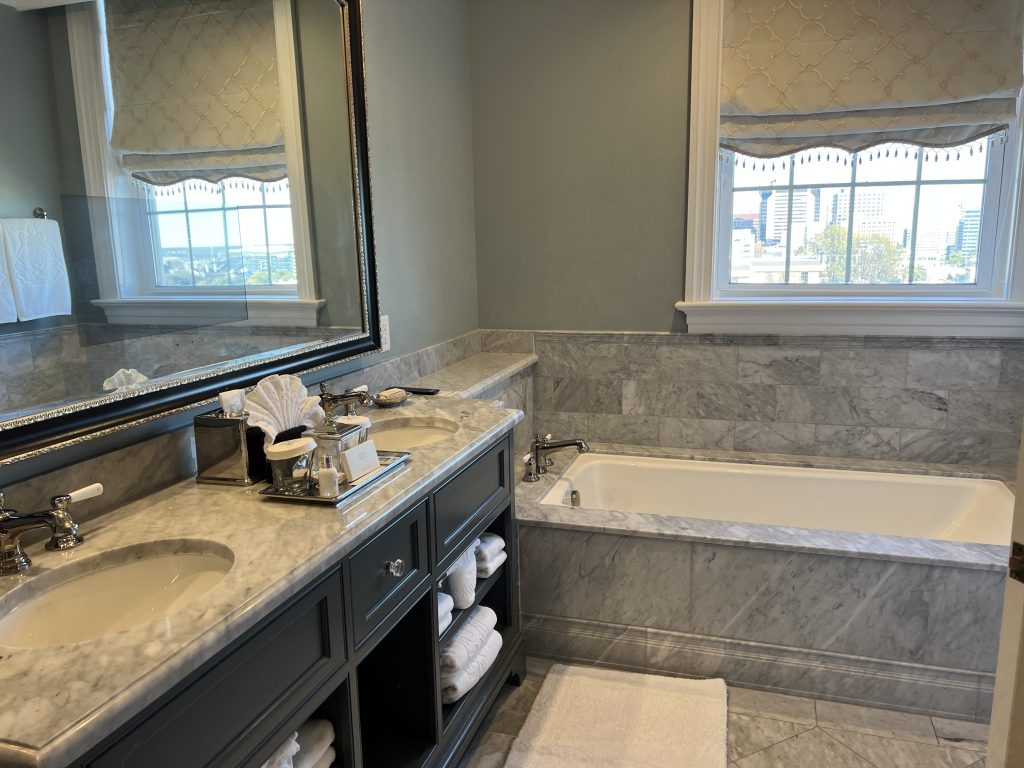 Our thoroughly modern bathroom had a soaking tub, marble vanity and TV screen built into the mirror

The walk-in shower was lovely, as was the separate water closet and dual vanity, complete with a television in the mirror. And, of course, plush bathrobes were hanging in the closet. I was smitten with the place.

Little things such as the Molton Brown bath products, complimentary chocolates and bottled water, and the Nespresso coffee maker were nice touches as well. 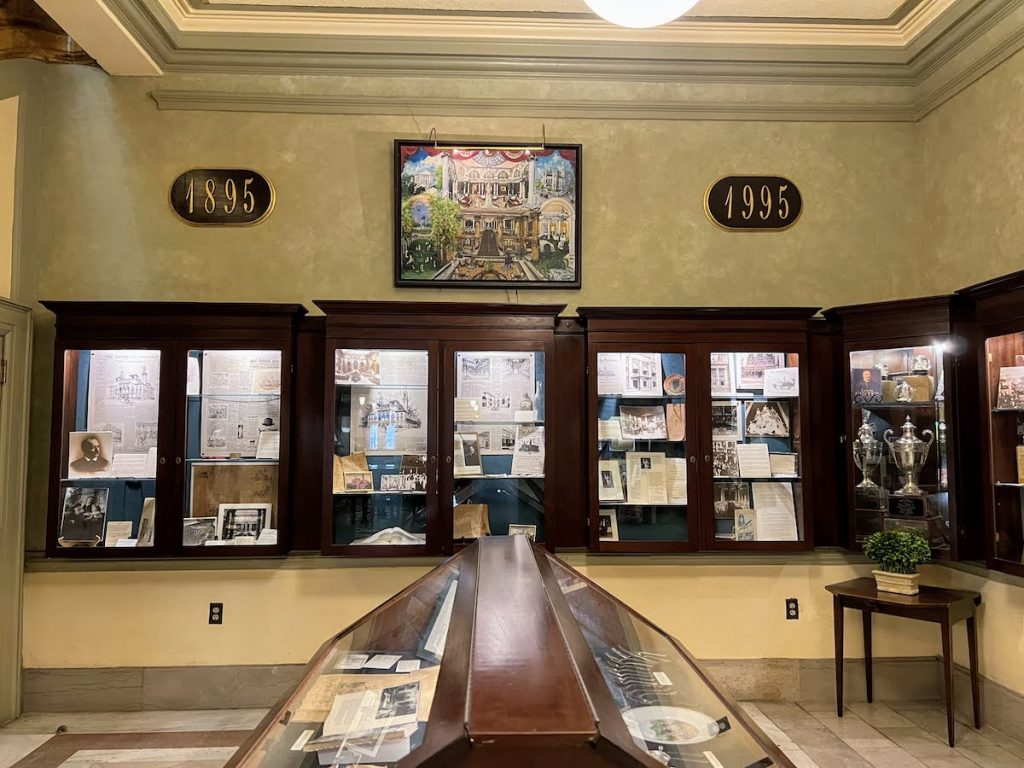 Although we booked her birthday dinner off-site, we did glance at Lemaire’s dinner menu. We agreed that it looked enticing with regional dishes and cocktails, showcasing the bounty of Virginia.

Since we had time, we revisited the Rotunda to view the elaborate hotel memorabilia display. It was filled with historical documents from 1895 to 1995. These included:

Legend has it that alligators lived in the lobby in the early 1900s and graced the hotel through the 1940s. A statue of an alligator in the entryway honors the reptiles of yore. 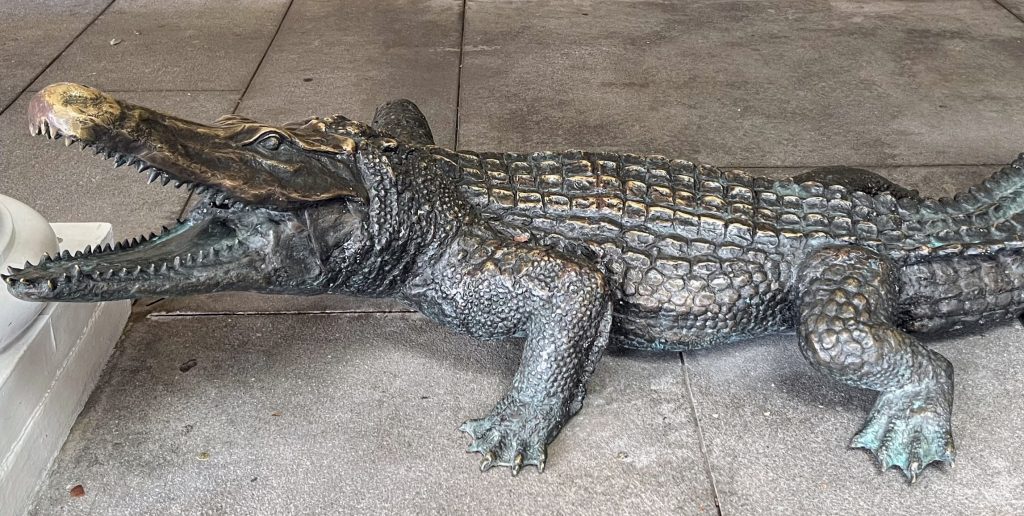 Over the years, 13 U. S. presidents have visited The Jefferson Hotel Richmond. And the grand staircase is said to have inspired the famous staircase in Scarlet and Rhett’s Atlanta mansion in Gone With The Wind.

Relaxation and renewal at Salon Vivace

Ooh, ooh, ooh, it was finally time for our spa day. We didn’t have far to go because Salon Vivace was only an elevator ride away.

Run independently from the hotel, Vivace offers everything from hair and nail services to dermaplaning and facial and massage treatments. We selected “The Vivace Escape Package,” which included a hydrating mani-pedi, a Vivace Classic Facial and Therapeutic Massage.

The three hours passed quickly and the pampering was a great way to spend relaxed time together after so much time in the car. 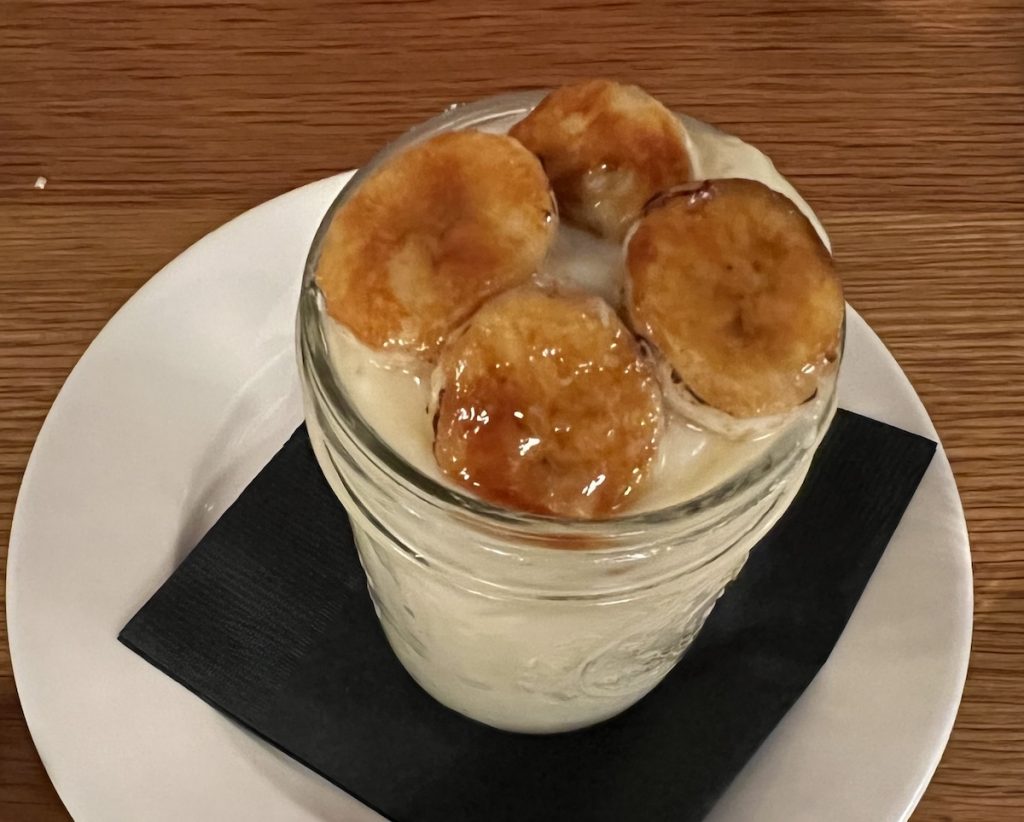 As we walked to the Lillie Pearl restaurant, we noticed that the gentrifying neighborhood around The Jefferson offered loft apartments, wine bars, beer gardens and other foodie establishments. And we also saw a nearby arts district.

For dessert, we shared Millie’s Banana Pudding made with cinnamon-sugar cookies, candied walnuts, and bruléed bananas. It was a sweet ending to a special day.

Before heading home the next day, we explored Grace Street a little more, stopping at Stella’s gourmet grocer for breakfast pastries and lattes: little treats to fuel us for the final miles home.

Read more about the author’s mother-daughter road trip on her blog,

A Baby Boomer’s Woman’s Life after 50

A Fun and Memorable Mother-Daughter Road Trip Home From Florida 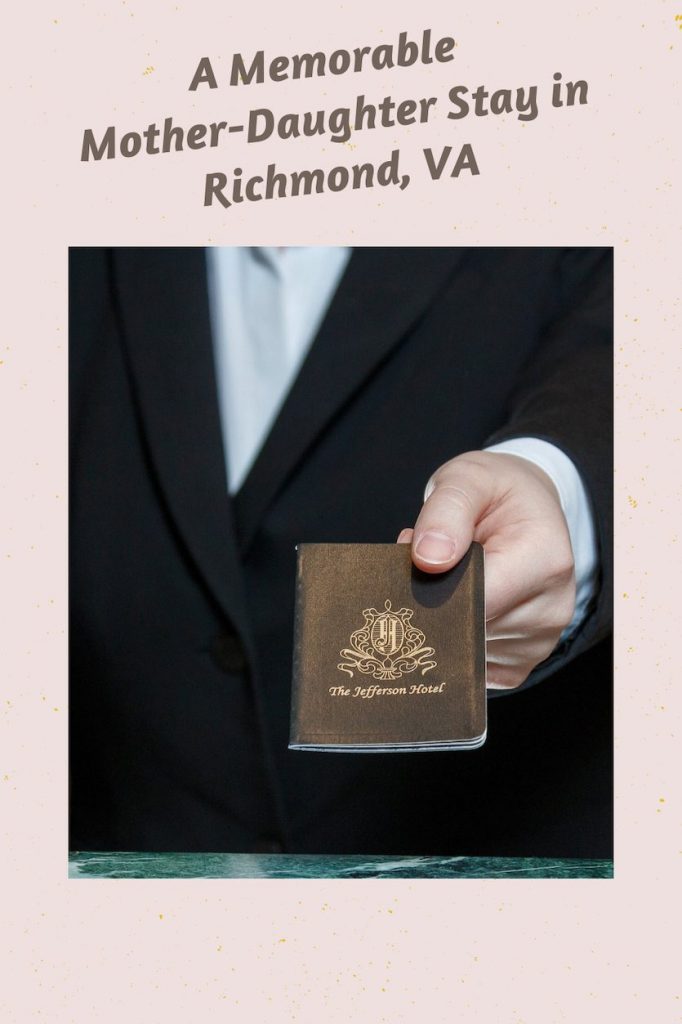