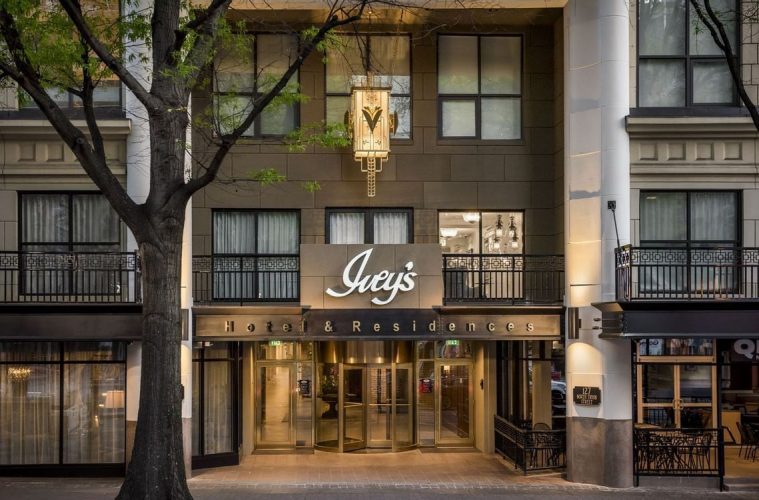 Ivey’s Hotel, Charlotte: Luxury With A Bit Of Whimsey 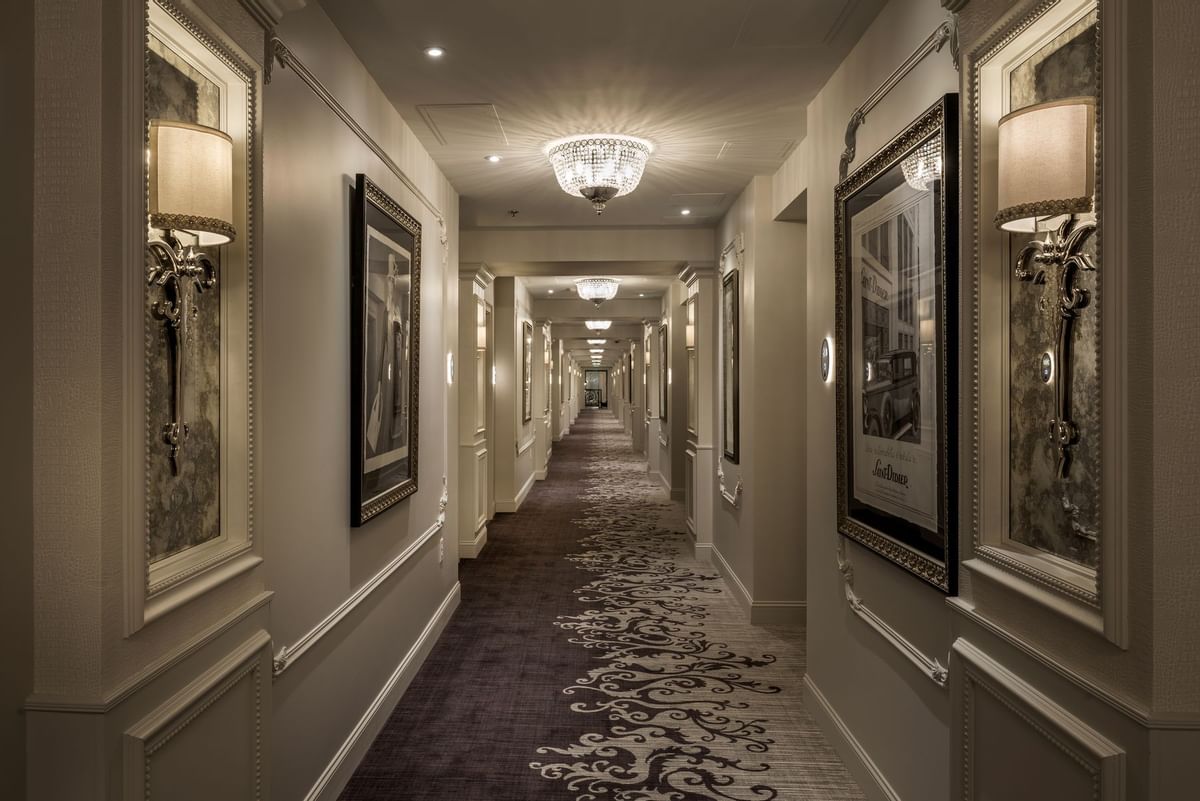 Plush-carpeted hallways with art above

The Ivey’s Hotel, located in the heart of Uptown Charlotte, gives meaning to the phrase: Shop ’till you drop.

Created out of a former posh department store dating from the early-20th century, this boutique hotel retains the glamour of its namesake. The 47-room boutique property invites kicking back in a style that evokes Parisian glamour.  It makes a fine base for shopping as well as exploring North Carolina’s Queen City.

Ivey’s Department Store was to Charlotte what Macy’s was to New York City, including its own animated holiday window displays. Although we never got to shop at Ivey’s, evidence of its splendor highlights its new life as The Ivey’s Hotel. 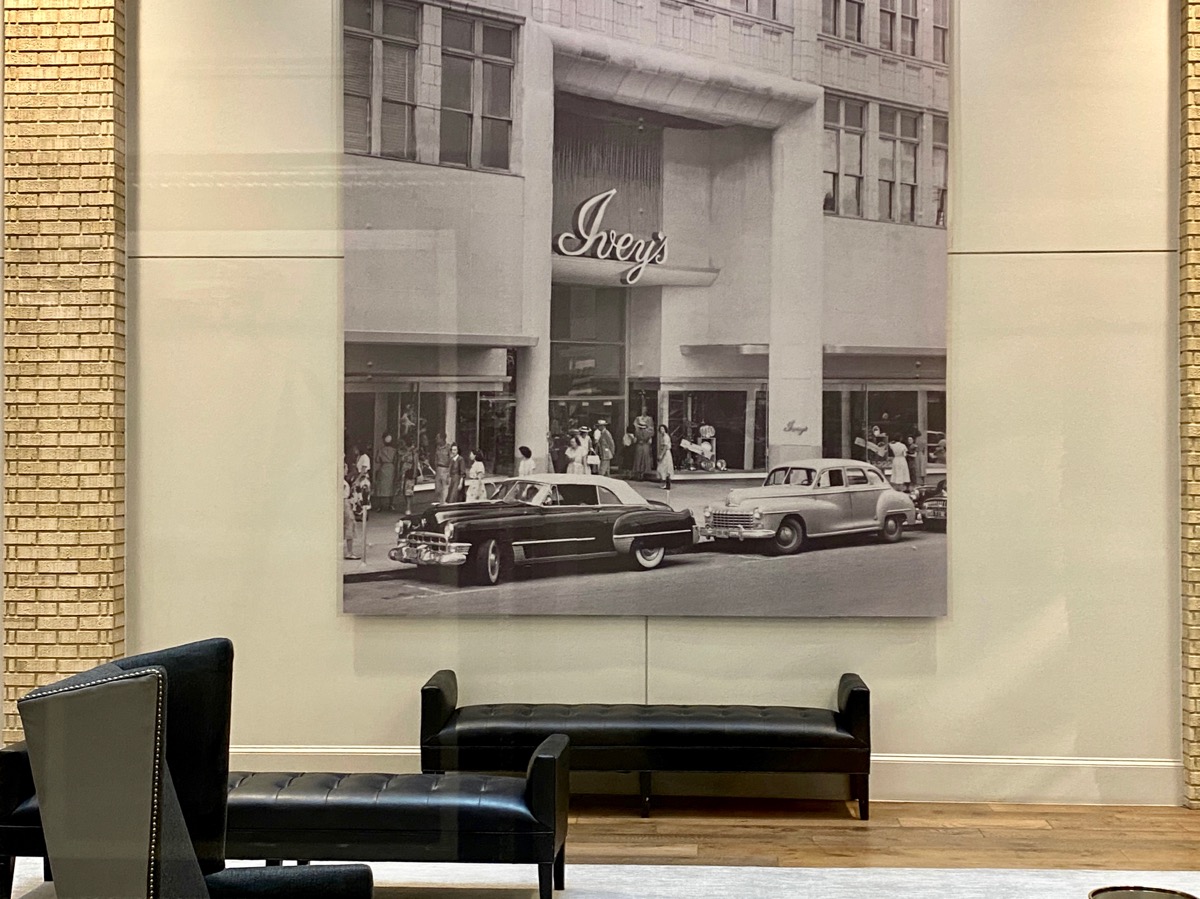 Vintage photos of Ivey’s Department Store displayed in the lobby

The Ivey’s Hotel: An atrium with throwback photographs

We get a taste of that history during our stay, thanks to oversized, black-and-white framed images of happy shoppers from the store’s heyday. They decorate the hotel’s airy, two-story residents atrium.

A slow ride in the historical elevator takes three minutes to go one floor. It gives us time to imagine what shopping here must have been like in the store’s glory days. 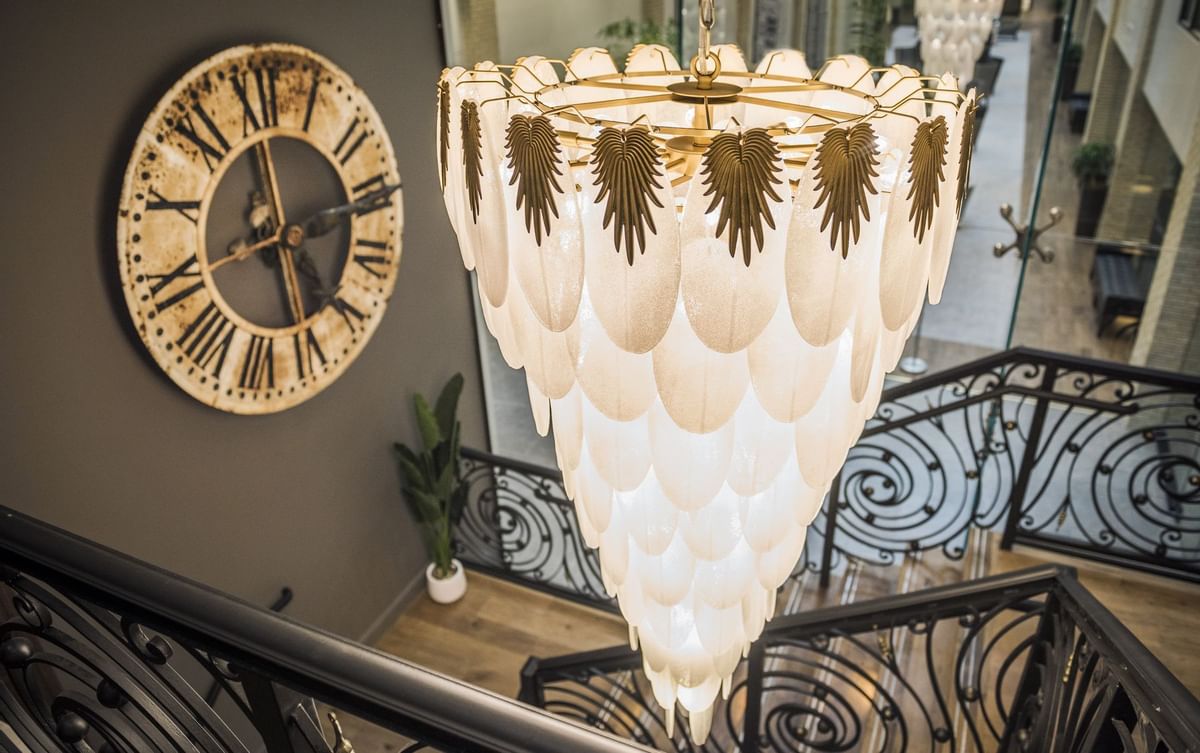 We step out onto a landing and are met by a giant mounted clock with roman numerals, the first of many clocks we’ll see on our guided hotel tour. Overhead a sparkling, oversized V-shaped chandelier drapes to a point above the ornate Art Deco stair rails. This is a popular spot for engagement photo shoots and many social media influencers have snapped an image here. 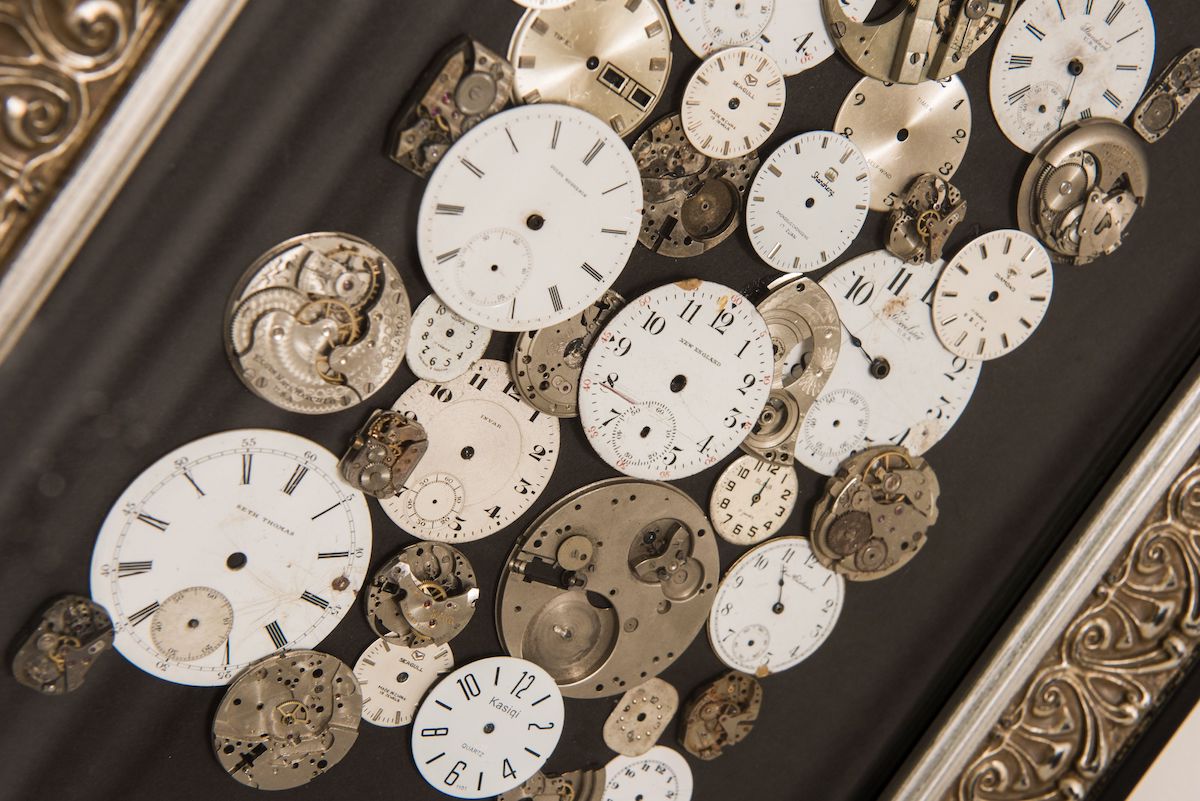 Entering our second-floor suite, we’re immersed in luxury – a king bed with elegant linens, padded headboard inset against a slightly recessed wall covered in soft-toned material that complements the bed, and an oversized rug atop plank wood flooring. Wine is chilling alongside a fruit plate on a gleaming marble-top desk. A floor lamp has a tripod base and crystals that dangle from its shade.

The rust-colored padded bench at the bed’s foot and the matching half-barrel art chair catch our eyes. The bench holds a super soft throw. We later learn it’s available for purchase in the hotel’s boutique. 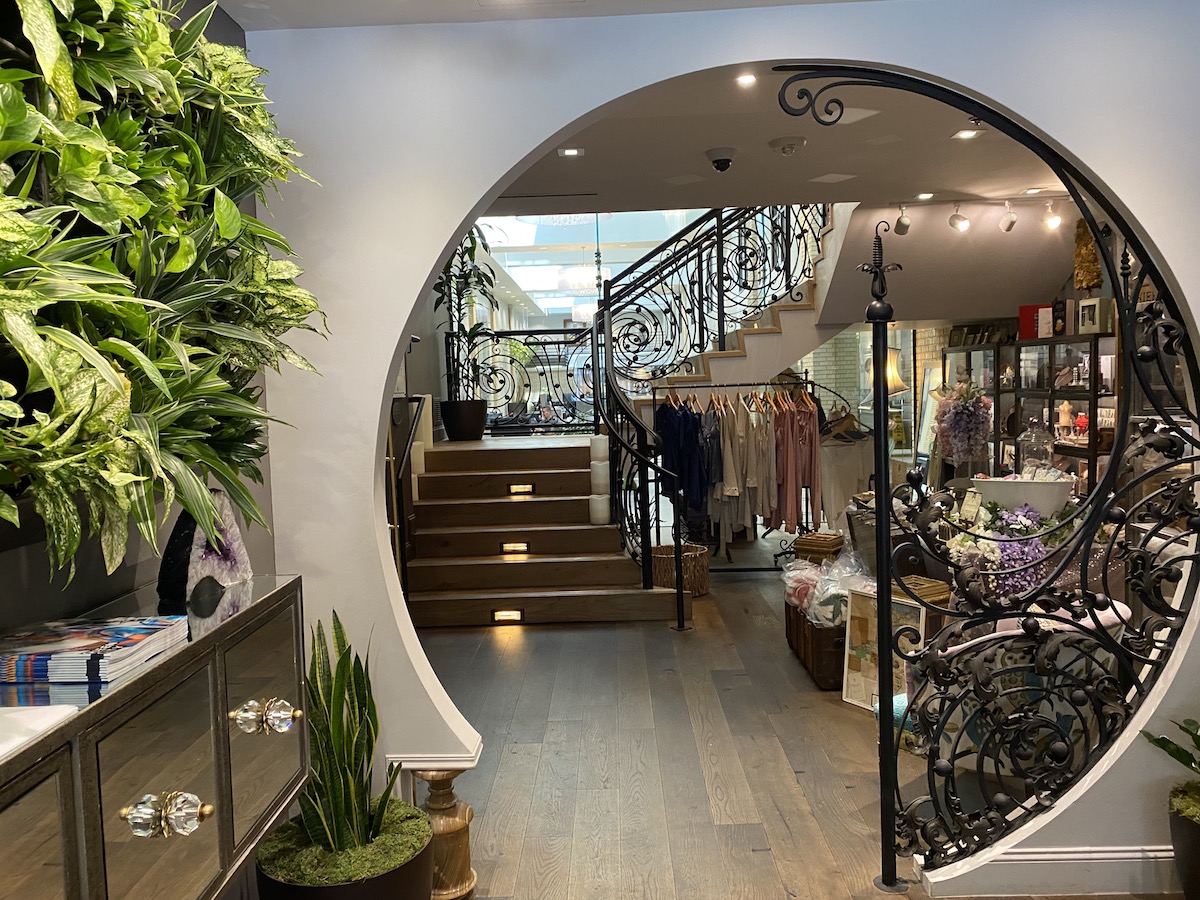 The shop beside the elevator

Whimsical artwork peeps out from the front of a bedside stand. Ours is a gleaming classic car; another room has a close-up of the face of what looks to be a ’50s Hollywood actress. 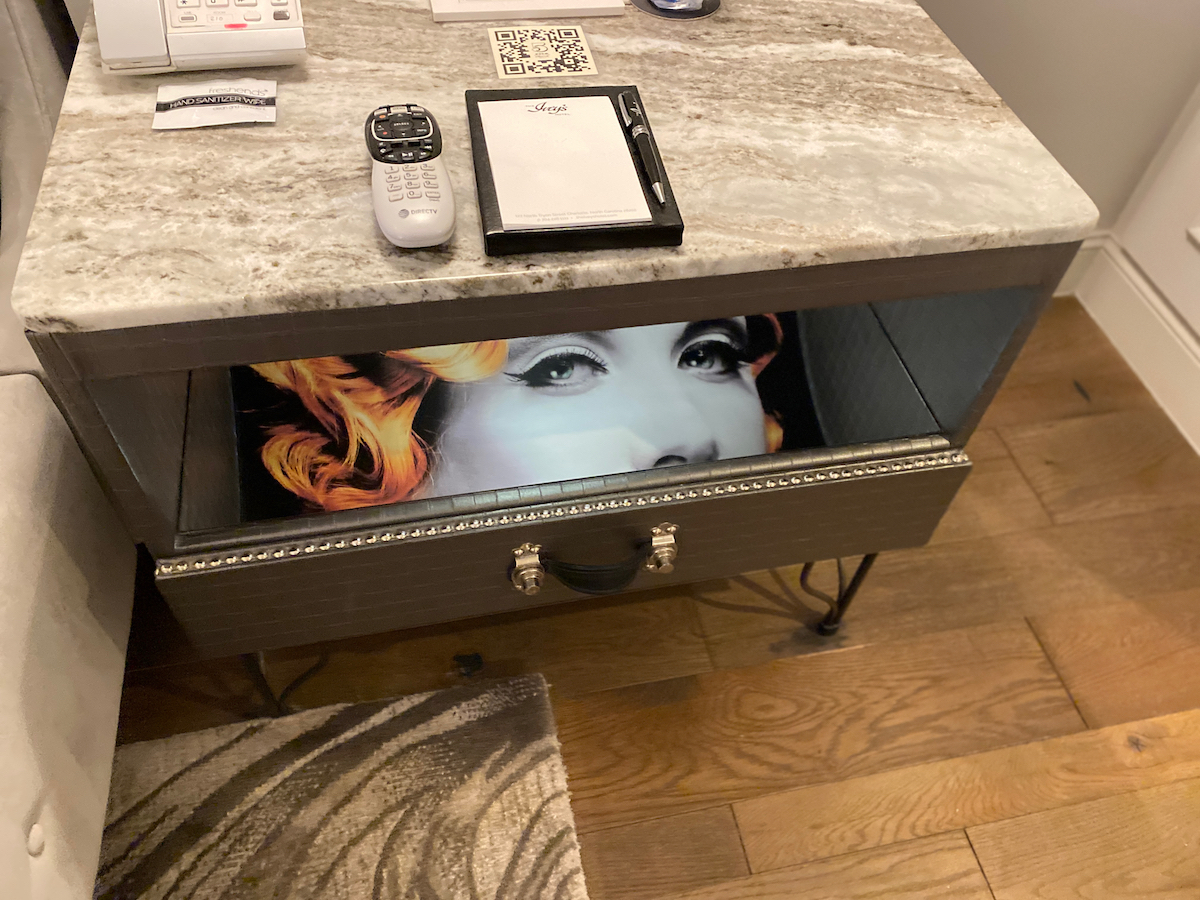 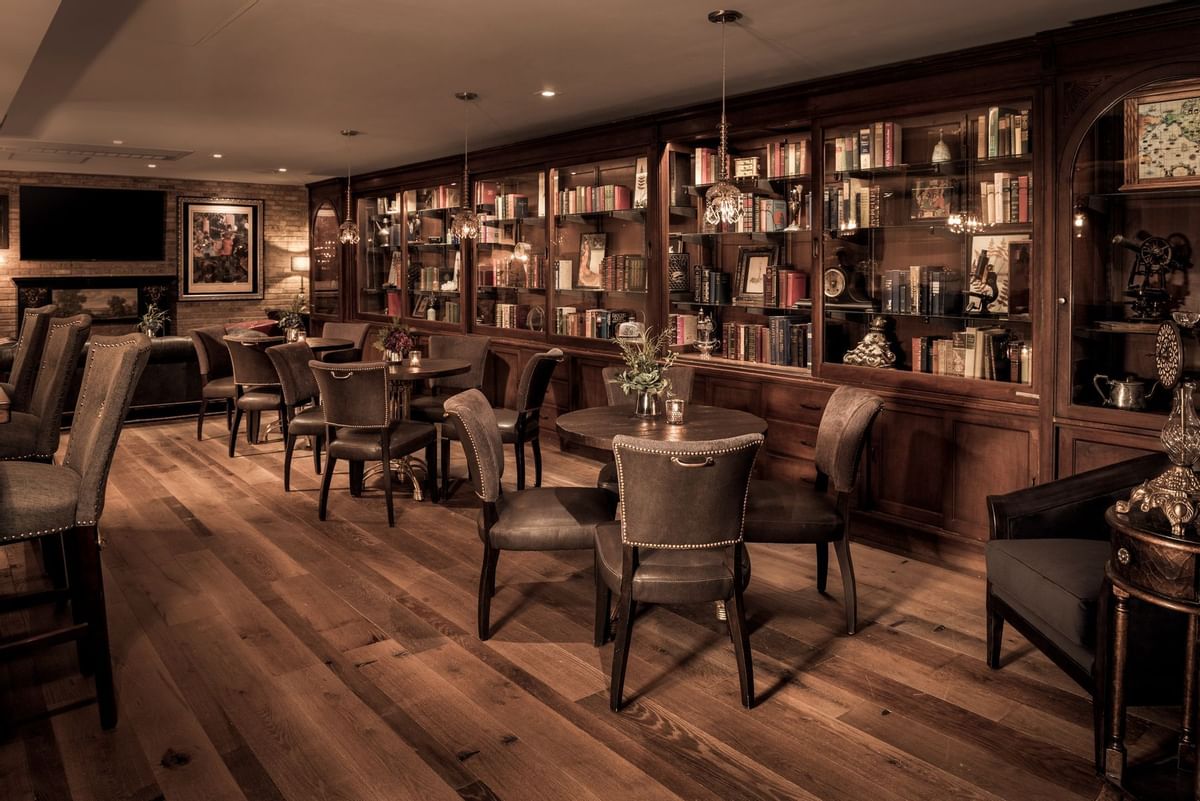 We quickly realize that the entire property shines, tastefully, with silvery touches, cut-glass pieces, chandeliers, mirrors and marble, and many fleurs-de-lis that further embrace the French feel.

One wall near the Library Lounge features three horizontal rows of a dozen matching foot-high mirrors topped in metallic “ribbons” all outlined in silver to create a 36-piece art installment.

The hallways are welcoming, too, with plush carpeting and large, framed, old, black-and-white magazine ads, many of them in French, touting haute couture, perfumes. and luxury goods like Hermès purses.

Clocks are a thing here 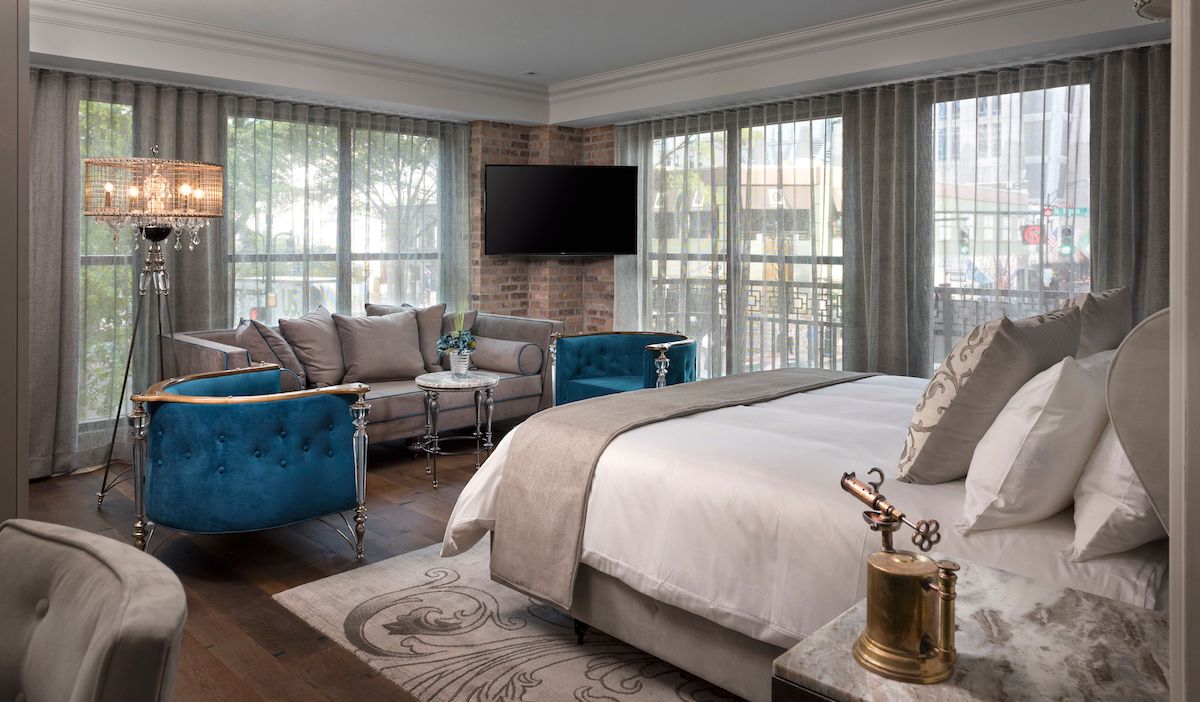 An elegant guest room at The Ivey’s Hotel

Now, to those clocks. Each guest room at the Ivery’s Hotel has three. Several larger suites have even more, each analog and most in decorative mantle styles. A few are “exploding” as their inner mechanisms are partially displayed and the faces distorted.

If you love the look, you may take it home with you. If an antique furnishing a suite carries a price tag,  it’s for sale. The same is true in the Library Lounge, where many more items, including books, are on view and for sale. 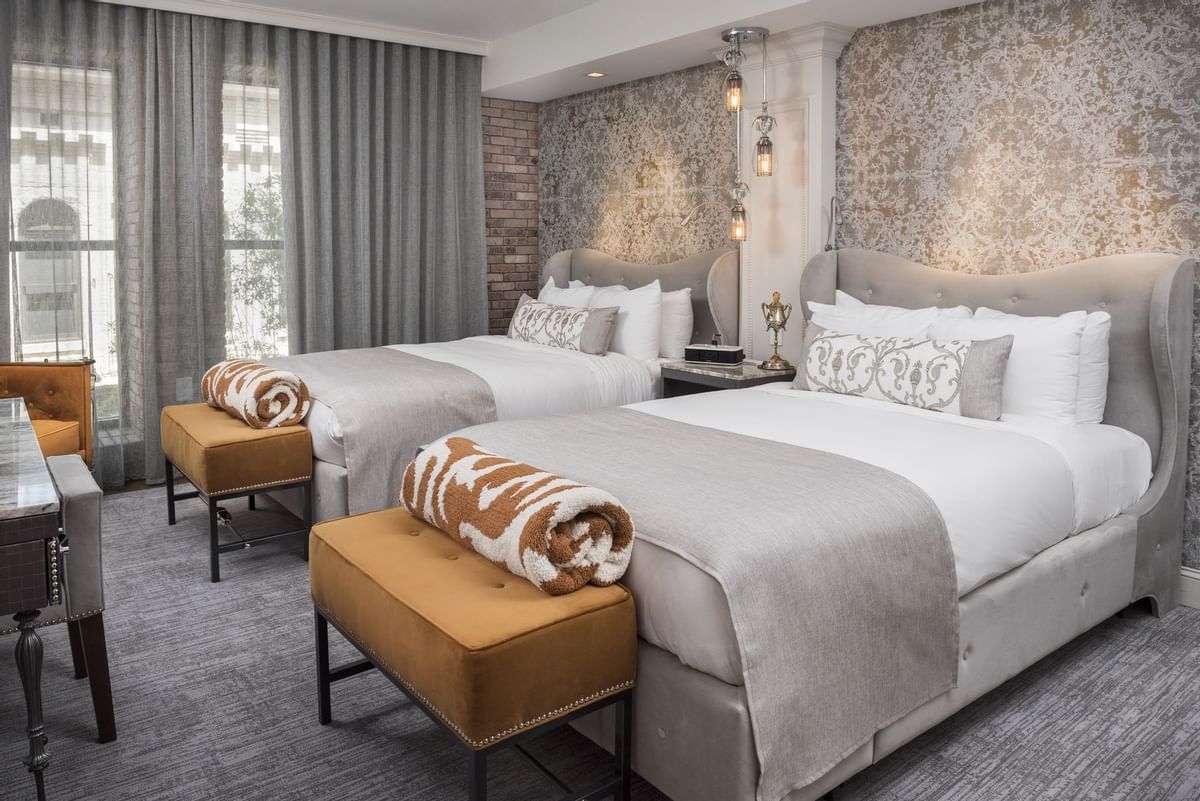 Another tastefully decorated guest room at The Ivey’s (credit: courtesy The Ivey’s Hotel)

At 1,500 square feet, the 24-hour fitness center has ample cardio equipment as well as a dedicated area for floor exercises, yoga, stretching, and free weights. Water is provided along with eucalyptus-scented towels. 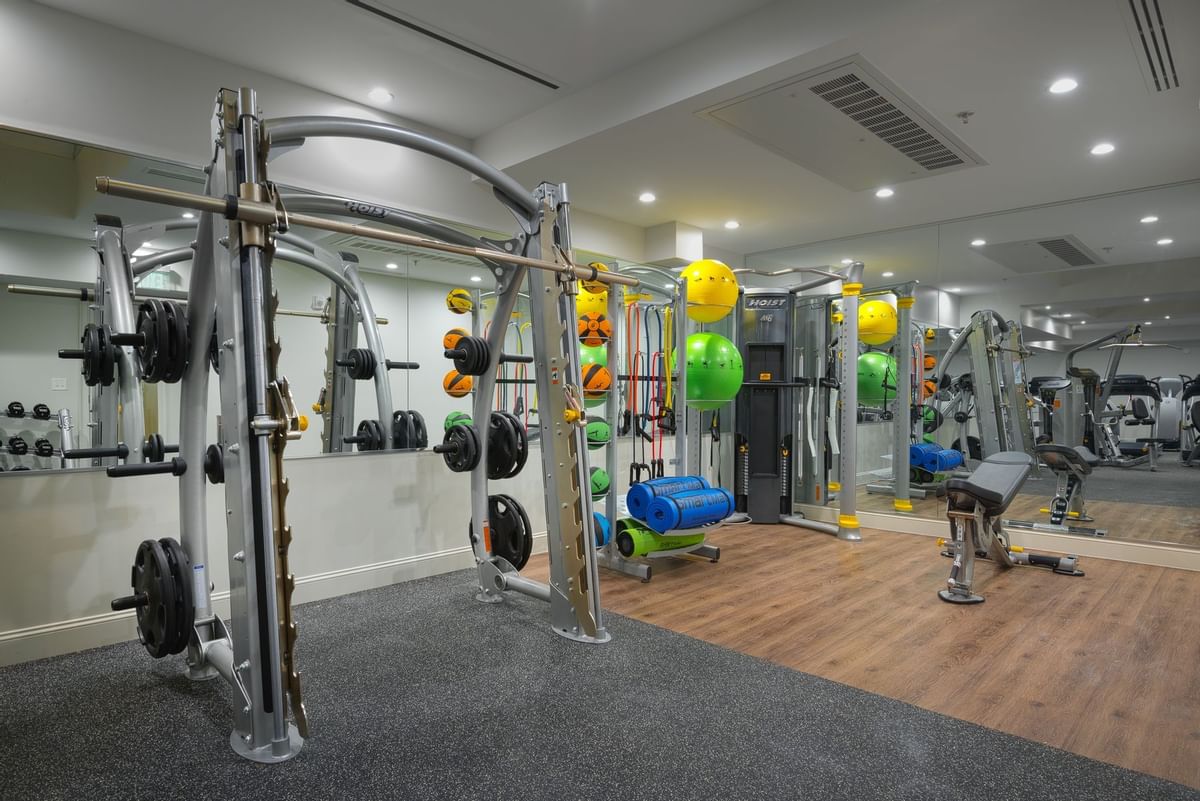 The 24-hour fitness center at The Ivey’s (credit: courtesy The Ivey’s Hotel)

During our stay, the hotel’s custom scent was sweet patchouli, heliotrope, and bergamot with a hint of eucalyptus. The hotel has partnered with Charlotte’s Pretty Honest Candles to produce this custom scent for sale in the boutique. 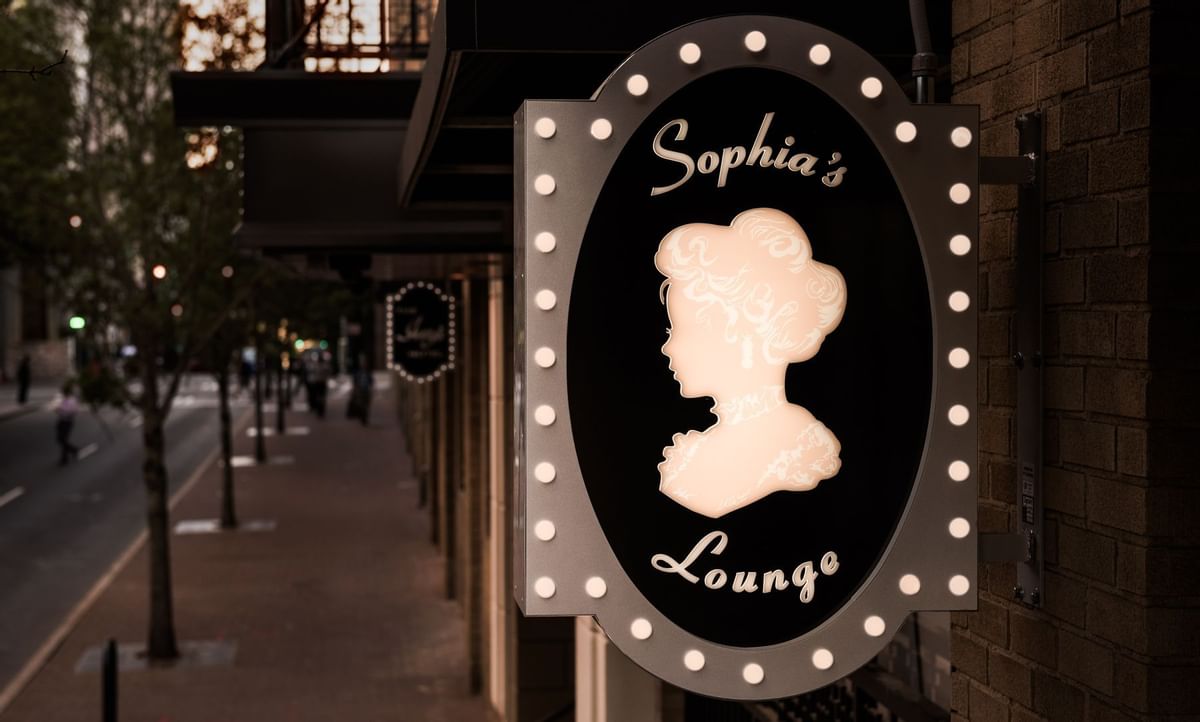 While breakfast is served in Sophia’s Lounge, it was closed during our visit, so we dined in the delightfully cozy Library Lounge. Here, a daily 5-7 p.m. reception offers guests a complimentary glass of select wines. Fun cocktails are a nod to the accompanying books on display at the end of the bar. The Alice in Wonderland included Tito’s vodka, the Anna Karenina featured Malfy Gin, while the Don Quixote employed Vago Elote Mezcal. Sophia’s offers drinks and dinner Wednesdays-Sundays. 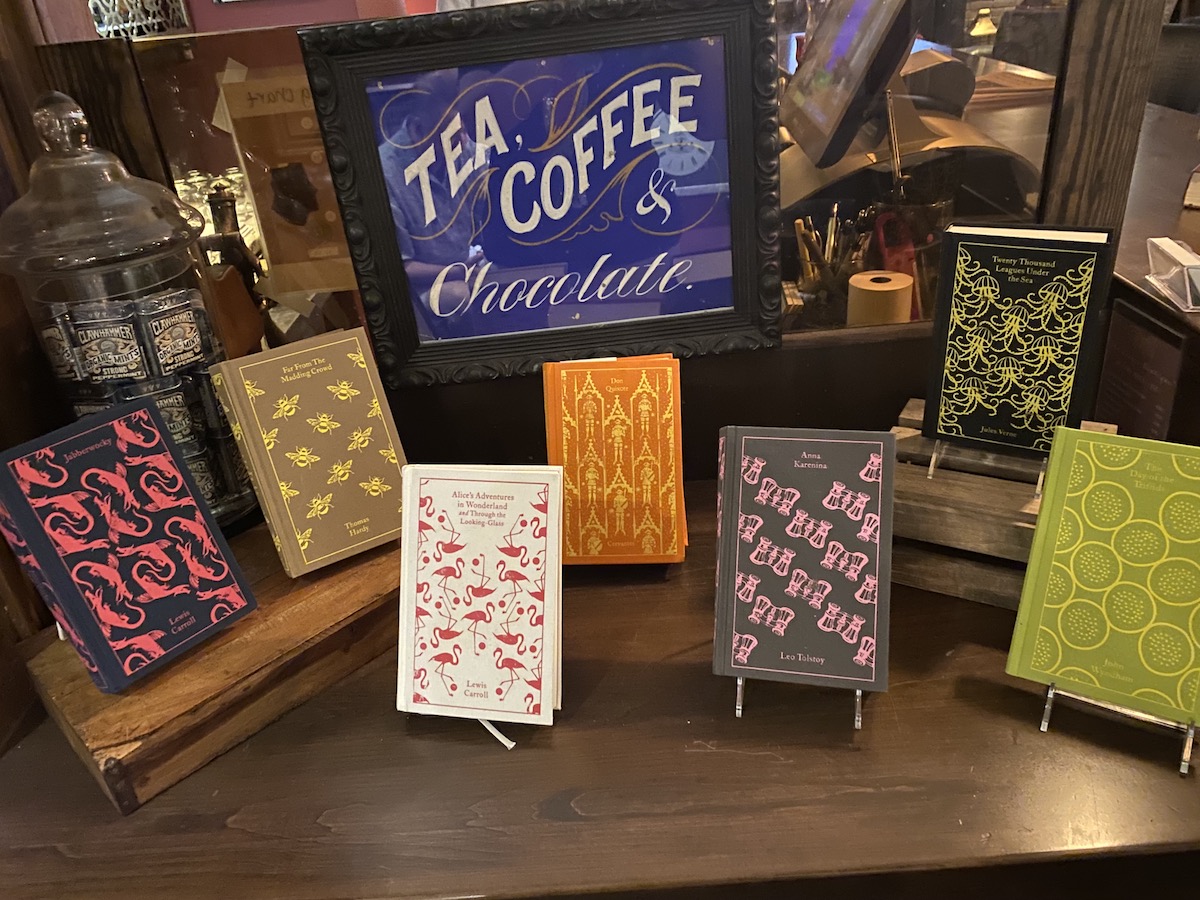 Cocktail in the lounge inspired by literature

Charlotte promotes itself with the slogan “Charlotte’s Got A Lot.” Rightfully so. Now based on the resurgence of properties like The Ivey’s Hotel & Residences, it’s fair to say Charlotte’s has always had a lot.

Ivey’s Hotel, a AAA four-diamond property, is located in the heart of the city, across the street from the Blumenthal Performing Arts Center and Bank of America Headquarters, and near the Epicentre Entertainment Complex, the Charlotte Convention Center, NASCAR Hall of Fame, The Mint Museum, and more.

The property is a five-minute walk from the Lynx Light Rail, CTC Station and Charlotte Transit Center Trolley.

Disclosure: The authors paid a media rate for their stay. 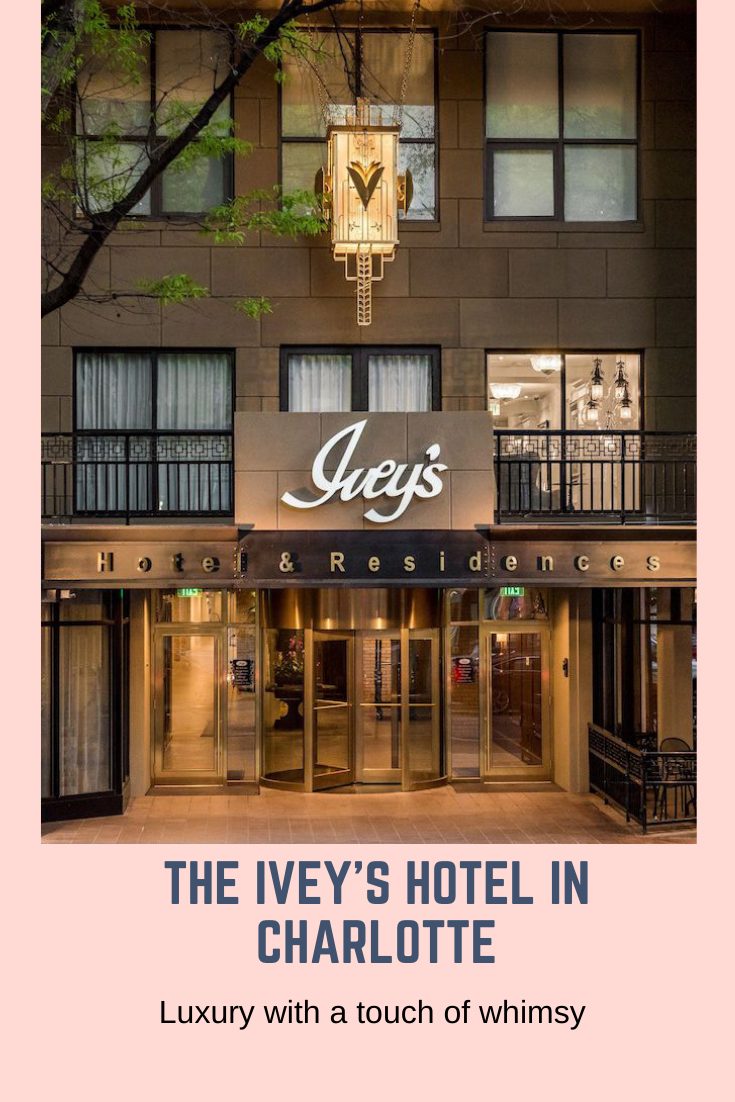