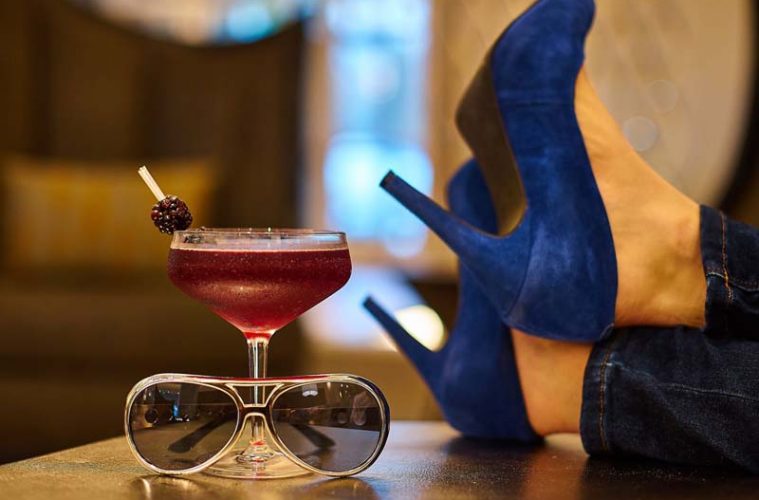 The Guest House at Graceland: Inspired by the King of Rock & Roll

Elvis would be proud.

As my husband and I entered the lobby of The Guest House at Graceland, I felt it. From the plush seating arrangements to the eye-catching circular swirling ceiling feature (which I later learned was designed with the pattern and movement of one of his signature capes in mind), Elvis was “in the building.” 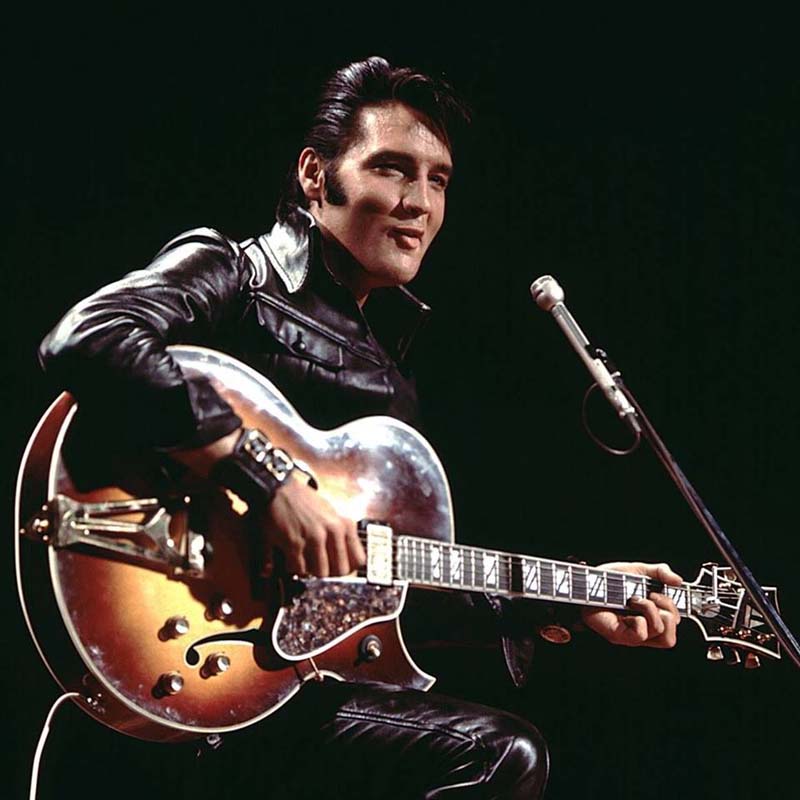 The King lives on! (Credit: The Guest House at Graceland) 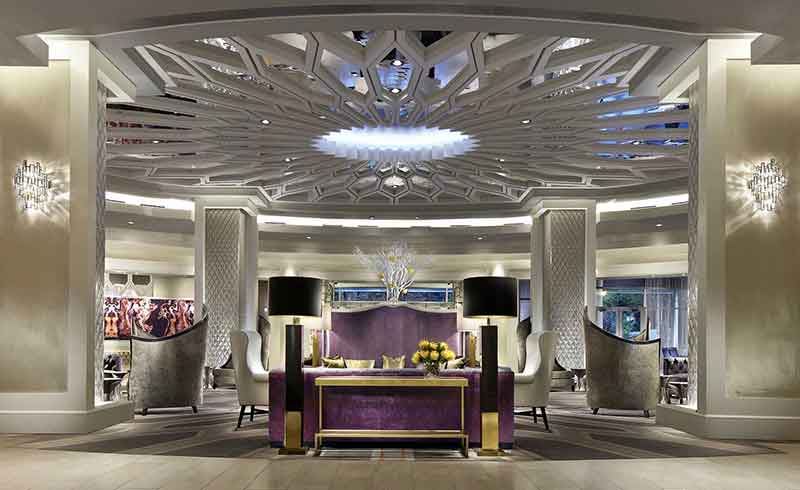 The lobby (Credit: The Guest House at Graceland)

The 450-room luxury hotel, opened less than a year ago and located just steps away from Elvis Presley’s Graceland® Mansion in Memphis, Tennessee, is the city’s second largest. It is trumped only by the historic 464-room Peabody Hotel, home of the famous marching ducks.

After a quick, early check-in (thankfully, our room was ready hours before the official time of 4 p.m.), the southern hospitality of the bell service staff members who handled our luggage set the tone for our three nights in Memphis.

Guestrooms with a dash of rock & roll

The vibe continued as we entered our king room (rooms with two queen beds are also available). 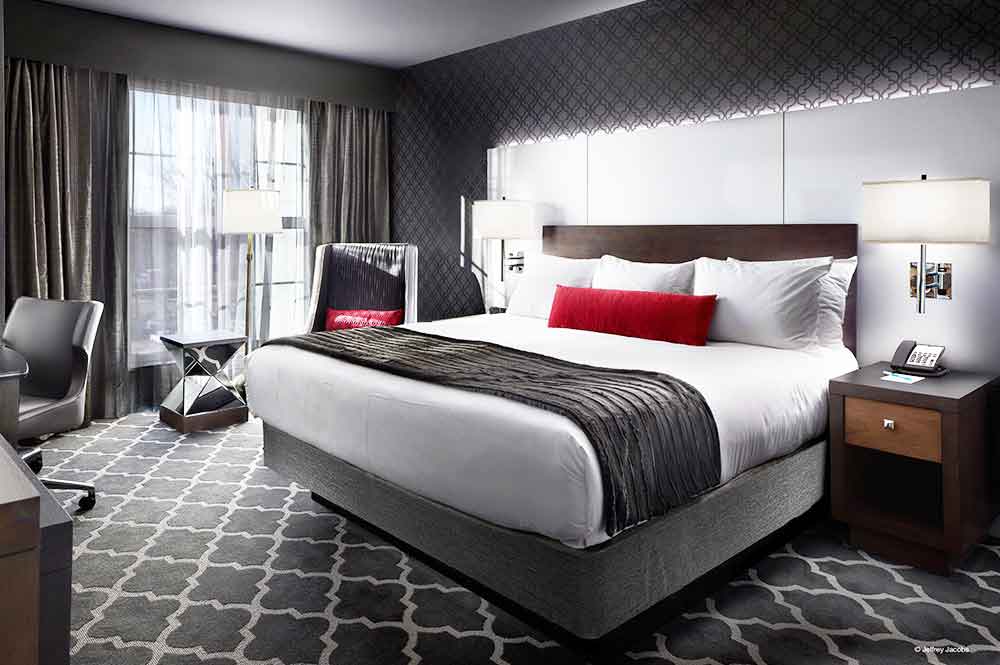 A king room (Credit: The Guest House at Graceland)

Elvis music filled the room from the 50-inch high-definition flat-screen TV, which had been programmed with his songs from the 50’s, 60’s and 70’s (guests can choose the decade), along with special features about the new Elvis Presley’s Memphis™ – the $45 million, 200,000 square-foot, state-of-the-art entertainment complex that opened in March, 2017, across the street from Graceland Mansion. Our third-floor room overlooked the hot tub and pool, much larger than the small kidney-shaped pool Elvis had originally installed at Graceland after he purchased the home in 1957. 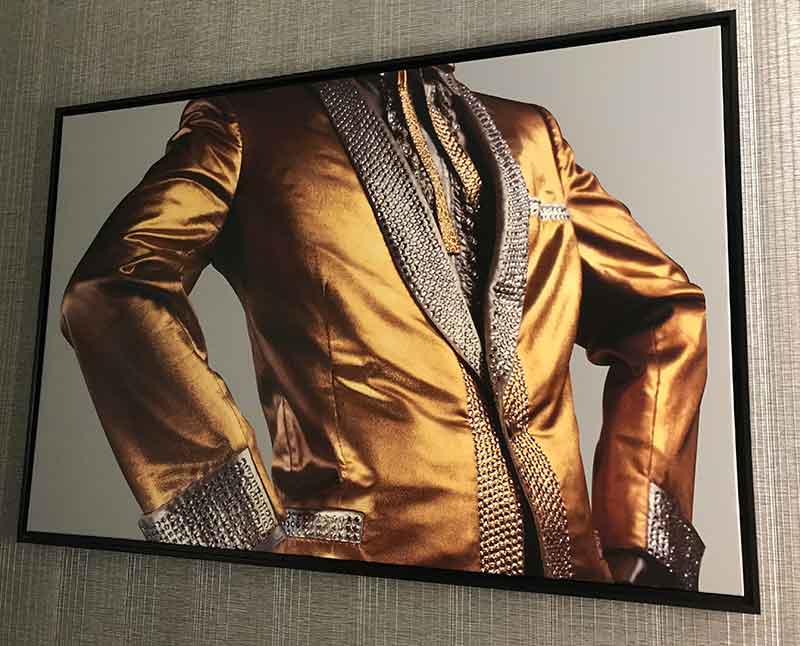 Having a Keurig coffee brewing system and small refrigerator in the room made it easy to enjoy breakfast in the room before leaving for a full day of sightseeing.

Amenities – including an in-room safe, steam iron and ironing board, and wireless iPhone charging clock radio – are among those I expect to find in a luxury property. A magnifying make-up mirror is something I always look for, too, and you’ll find one on the marble-topped counter in the bathroom that also features include a large walk-in shower with overhead rain shower and wall-mounted body spray.

The Guest House at Graceland has kingly Elvis-inspired suites

Twenty of The Guest House at Graceland’s 450 rooms are luxury themed suites, each with design and décor supervised by Priscilla Presley. Although we didn’t get a personal tour, we walked to the end of the main hallway to find the staircase and crystal chandelier leading to the top floor. Known as “the Upstairs,” it replicates the stairs leading to Elvis’s bedroom and private living quarters at Graceland. 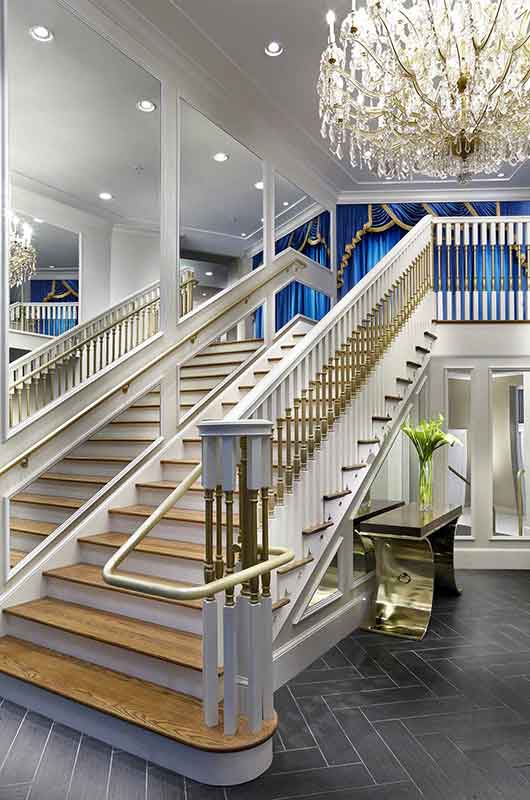 If you’re celebrating a milestone anniversary or other special occasion, you might want to splurge by booking one of the King’s Suites, complete with a TV mounted on the ceiling, just like Elvis had in his bedroom at Graceland. Other suites were inspired by Las Vegas décor and his home in Palm Springs.

Accurately billed as a hotel “with a touch of grace and a dash of rock ‘n’ roll,” the Guest House of Graceland is recommended to anyone planning to visit Graceland Mansion and the Elvis Presley’s Memphis™ complex.

Did you know? Graceland was proclaimed a National Historic Landmark in 2006 and is the second most visited house in America, right after the White House, welcoming over 600,000 visitors annually. 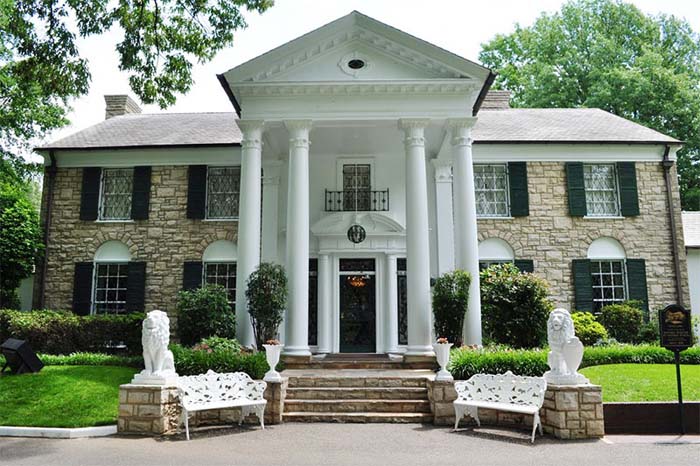 Although we chose to sample restaurants in various parts of Memphis during our stay, several dining options are available within the hotel.

The full-service Delta’s Kitchen serves a hearty breakfast buffet and then transforms itself in the evening into an intimate, candle-lit dining establishment. E.P.’s Bar & Grill is a southern-style pub that also includes a pool table in homage to Elvis’s love of the game; amateur crooners can sing their favorite tunes on Karaoke Wednesdays. Appetizers and drinks are served in the Lobby Lounge, where nightly live music adds to the ambiance, and the Shake, Rattle & Go coffee and snack bar is open 6 a.m. to 7 p.m. for breakfast and all-day food items.

On most nights, you can attend a showing of one of the 33 movies Elvis made throughout the 1960s in the Guest House’s 464-seat theater, also available for special live performances and presentations. 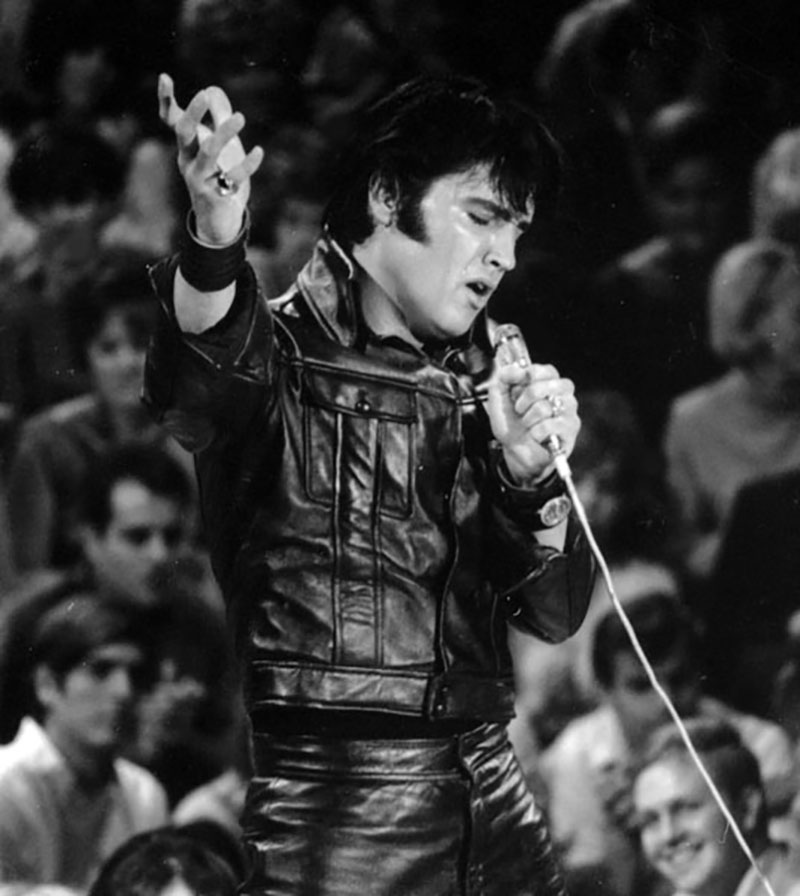 Who can forget Elvis? (Credit: The Guest House at Graceland)

The morning after our arrival, we boarded the complimentary shuttle bus, which transports guests to the entrance of the Elvis Presley’s Memphis complex. The first tour of the Mansion begins at 9 a.m. so we made sure we were on the 8:30 shuttle to retrieve our tickets and be one of the first groups of the day. Whether visiting during Elvis Week or any time of the year, start early to avoid the crowds that build throughout the day. (If you choose to forgo the ride, it’s a five-minute walk.)

Shuttle transportation is also offered to hotel guests every evening to Beale Street, the iconic home of the blues, leaving the hotel on the hour from 6 to 10 p.m. and returning from Beale Street on the half hour from 6:30 to 10:30 p.m. ($5/each way).

Guests flying into Memphis International Airport (MEM) receive complimentary transportation to and from the hotel, but having a car to explore Memphis beyond Elvis is recommended. 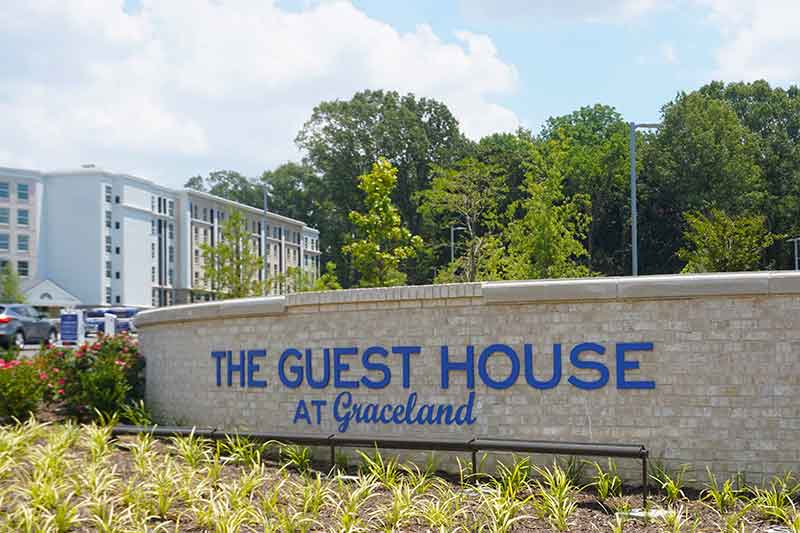 An ideal base for sightseeing

The Guest House at Graceland is an ideal base for sightseeing in Memphis, since Beale Street, Sun Studio, Mud Island River Park, the Memphis Rock & Soul Museum, Stax Museum, the National Civil Rights Museum and other area attractions are all within an easy 15- to 20-minute drive. 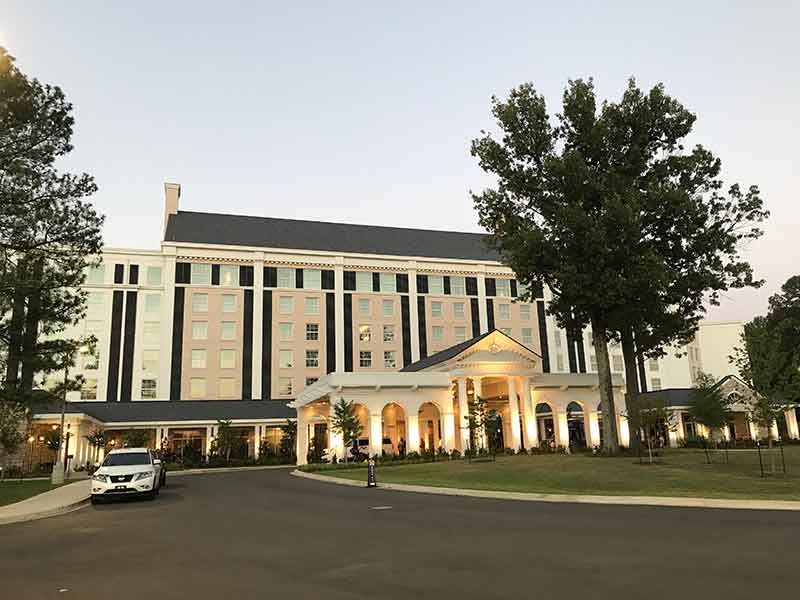 The Guesthouse at Graceland at dusk (Credit: Debbra Dunning Brouillette)

Disclosure:
The author received a reduced media rate during her stay at The Guest House at Graceland. 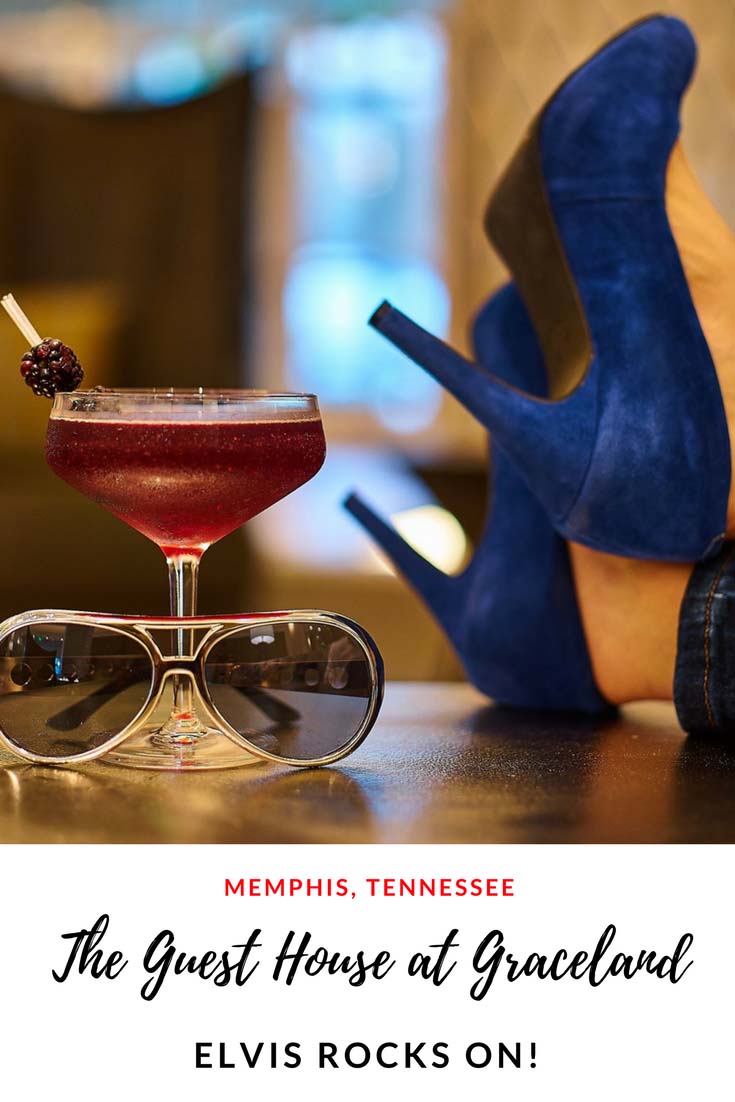