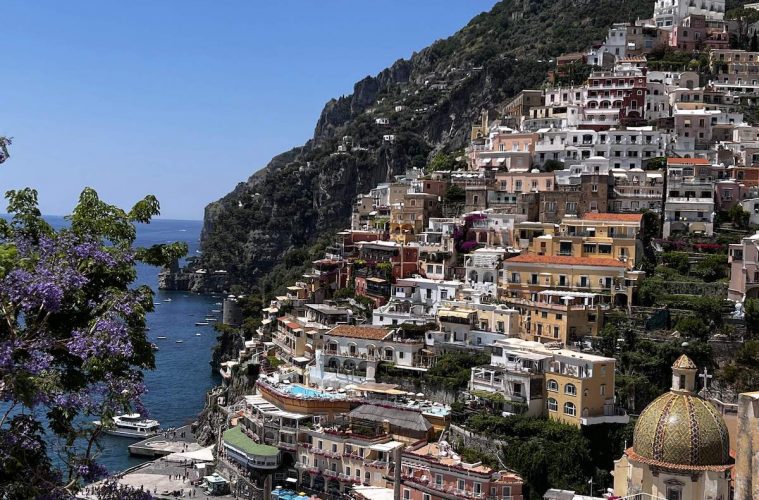 The Amalfi Coast: Made for Romance…and Movies

When a friend’s son, then 18, gazed upon southern Italy’s Amalfi Coast for the first time, he proclaimed: “Now I know why some people believe in God.”

Declared a UNESCO World Heritage Site in 1997, the Amalfi Coast is cherished for its terraced vineyards, olive groves, and citrus orchards. And beloved for its rugged terrain, upland pastures, and medieval villages.

The lures of the Amalfi Coast 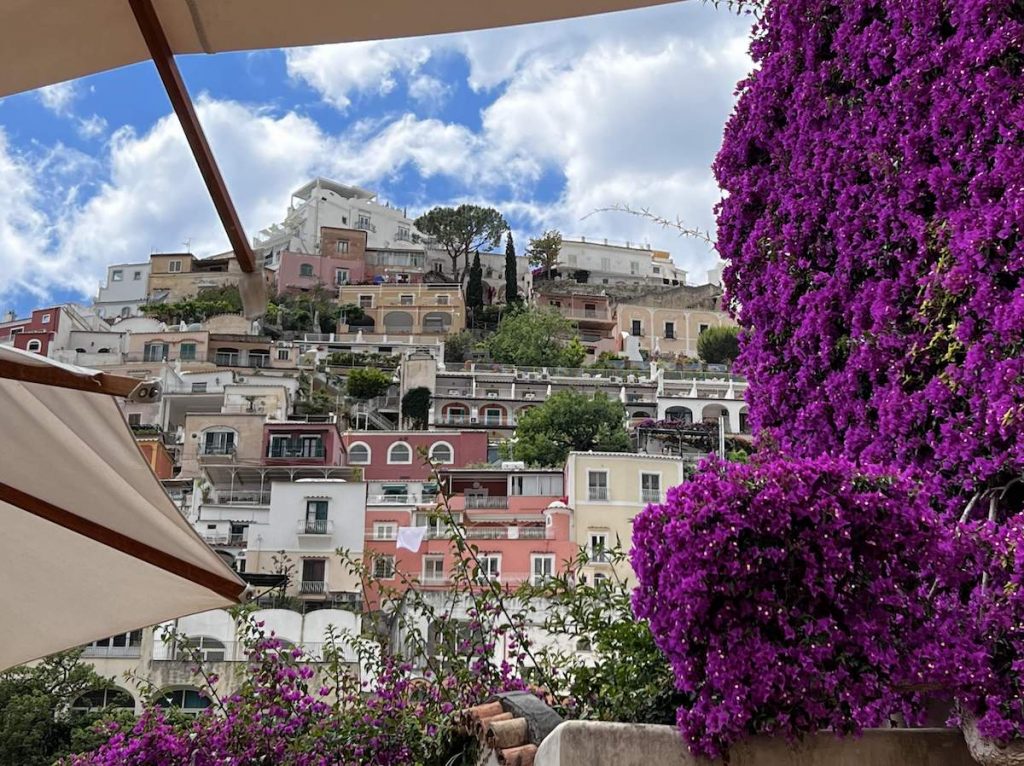 Beauty from every vantage point along the Amalfi Coast

The Amalfi Coast is made for romance.

Picture riding in a convertible, roller-coasting the seductive curves atop the coast’s dramatic cliffs with surf crashing below.

Imagine an al fresco table for two on the hillside arena that is Positano, wine glasses clinking, the sun dipping below the horizon, the moment poignant for being just that.

Witness the bride and groom as they emerge from Ravello’s Duomo. They’re one of the countless couples to have tied the knot in this cathedral over the past 900 years. 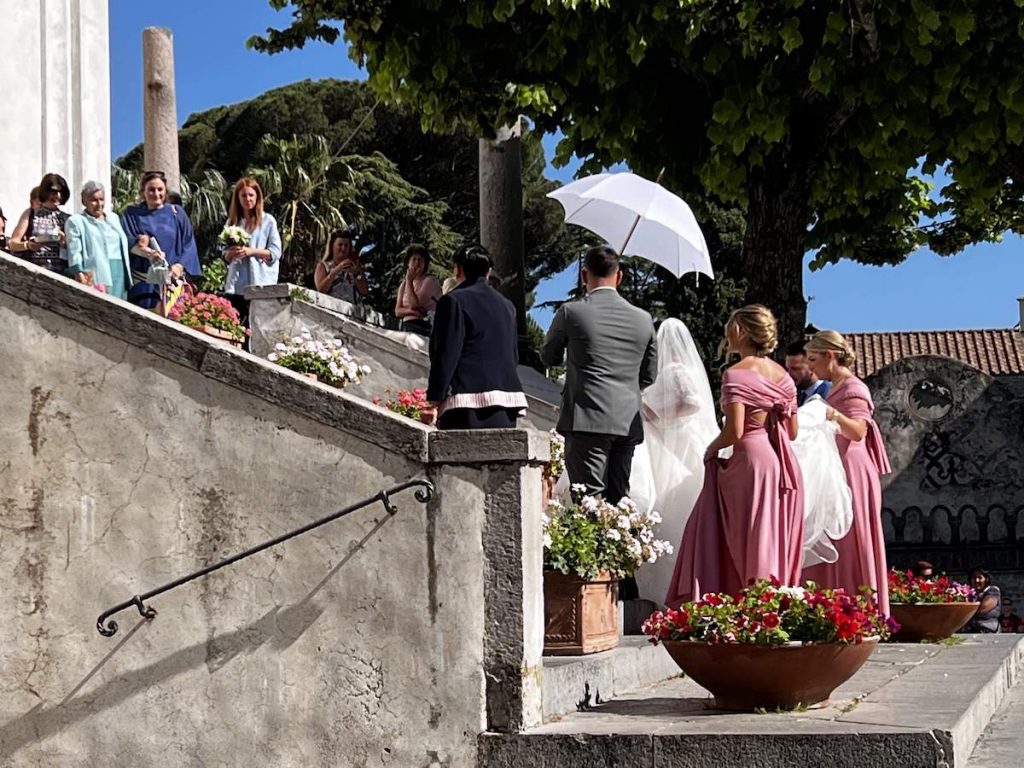 Weddings are a common sight at the Duomo in Ravello

No wonder the Amalfi Coast has played a leading role in romantic movies.

These include Only You (1994), starring Robert Downey, Jr. and Marisa Tomei, and A Good Woman (2004), with Helen Hunt, Scarlett Johansson, and Tom Wilkinson. Even Under the Tuscan Sun (2003) couldn’t stay away from Positano. 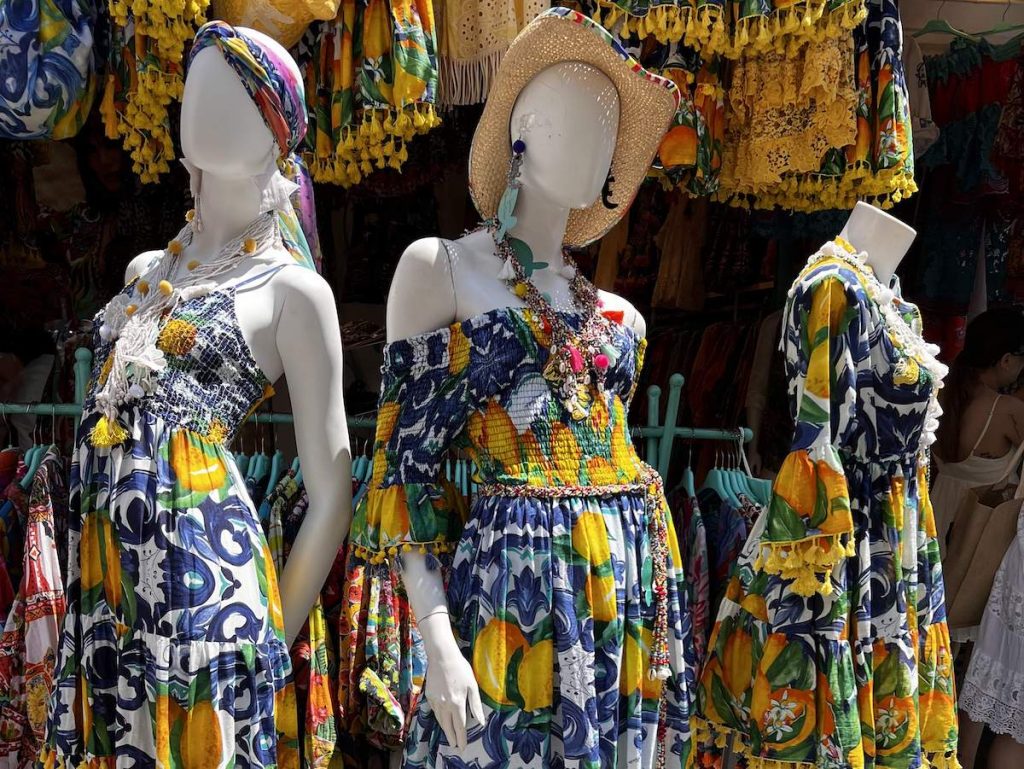 The Amalfi Coast is famous for its lemons, making them a popular motif for clothing, ceramics and other souvenirs

I guess there’s something about breathtaking beauty that heightens the senses and facilitates feelings of love. That I was traveling in Italy with my cousin and her family seemed beside the point. 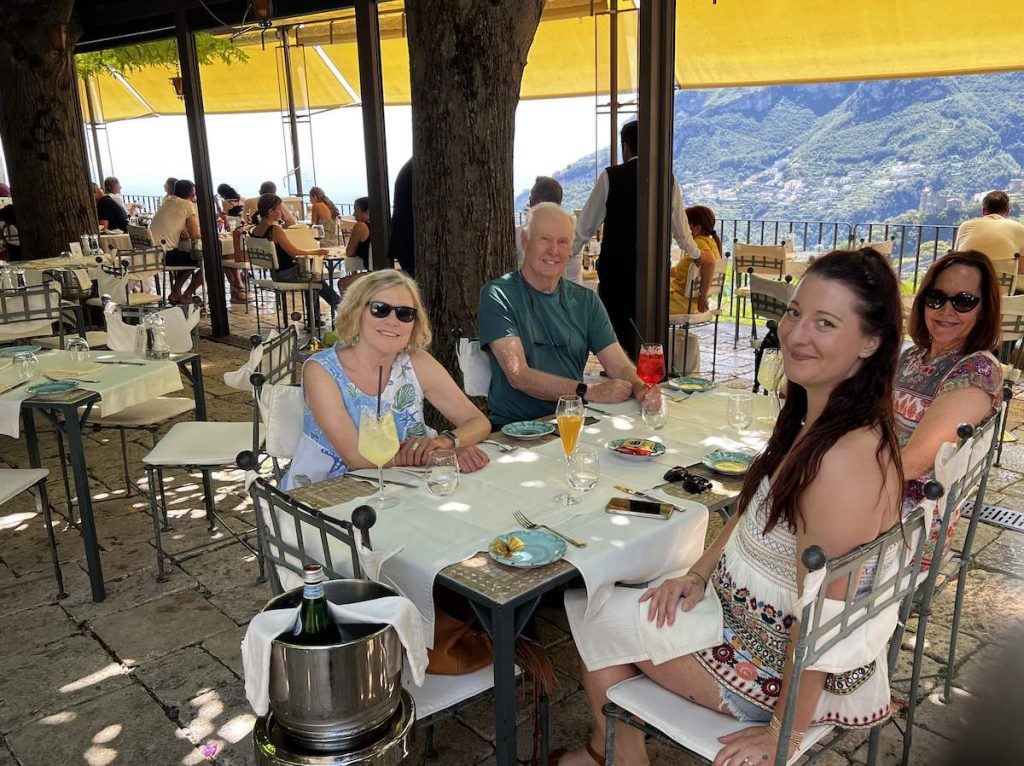 The author with her cousin’s family in Ravello

And the food of the Amalfi Coast!

It’s hard not to swoon over freshly grilled fish, seafood pasta (like the spaghetti alle vongole, or spaghetti with clams), mozzarella made from water buffalo’s milk, Neapolitan-style pizza, and the addictive eggplant preparations (we ordered it almost every day). I also sipped the best limoncello I’m ever likely to drink. 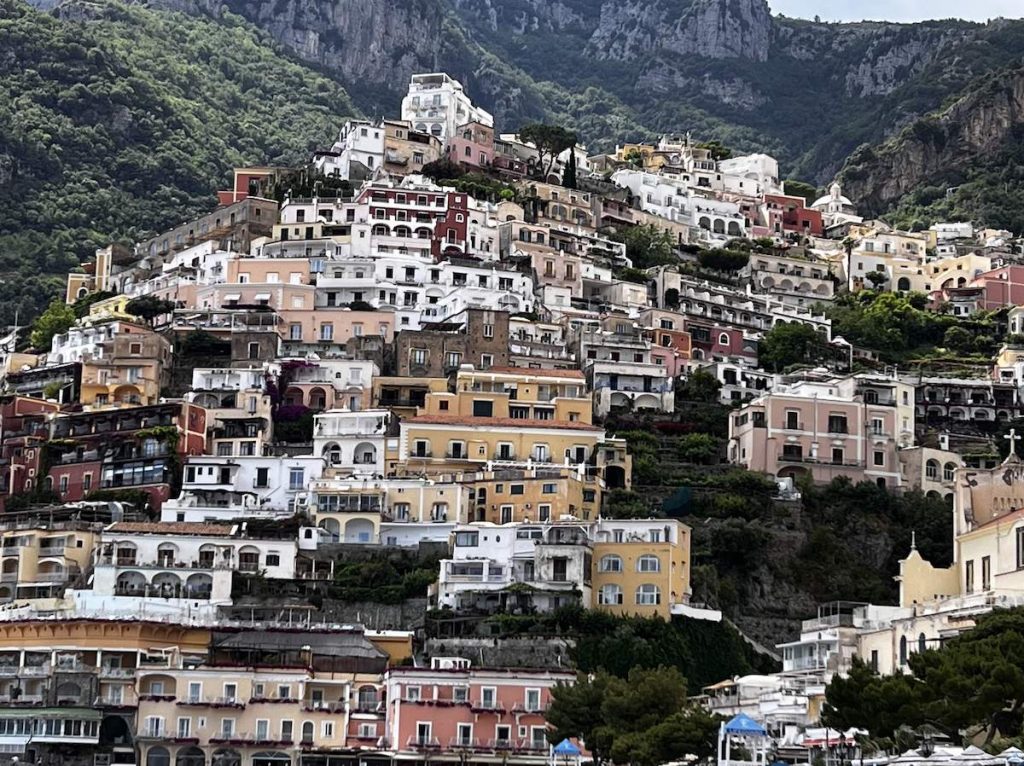 Positano, steeped on a hillside

One never forgets Positano, the most picture-perfect vertical village on the Amalfi Coast. It tumbles down both sides of a steep ravine. And it meets the sea at a sandy beach dotted with umbrellas and beach chairs.

Pastel-colored homes, hotels, restaurants, and shops crowd precipitous cliffs. They’re linked by stone staircases that keep the population healthy and tourists huffing. Interspersed among the cliffs are terraced gardens with fuchsia-colored bougainvillea, olive groves, and lemon trees. Yet nothing competes with the heady fragrance of jasmine to corral you back to the present.

Of course, there are crowds. Lots of them, as Positano seems to be one of the most popular land excursions for cruise ships docked in Naples. They come mostly to shop or to spend a few blissful hours on the beach, and you can’t blame them. But frankly, I would feel short-changed. You don’t want to rush through paradise.

Ravello: Farther down the coast 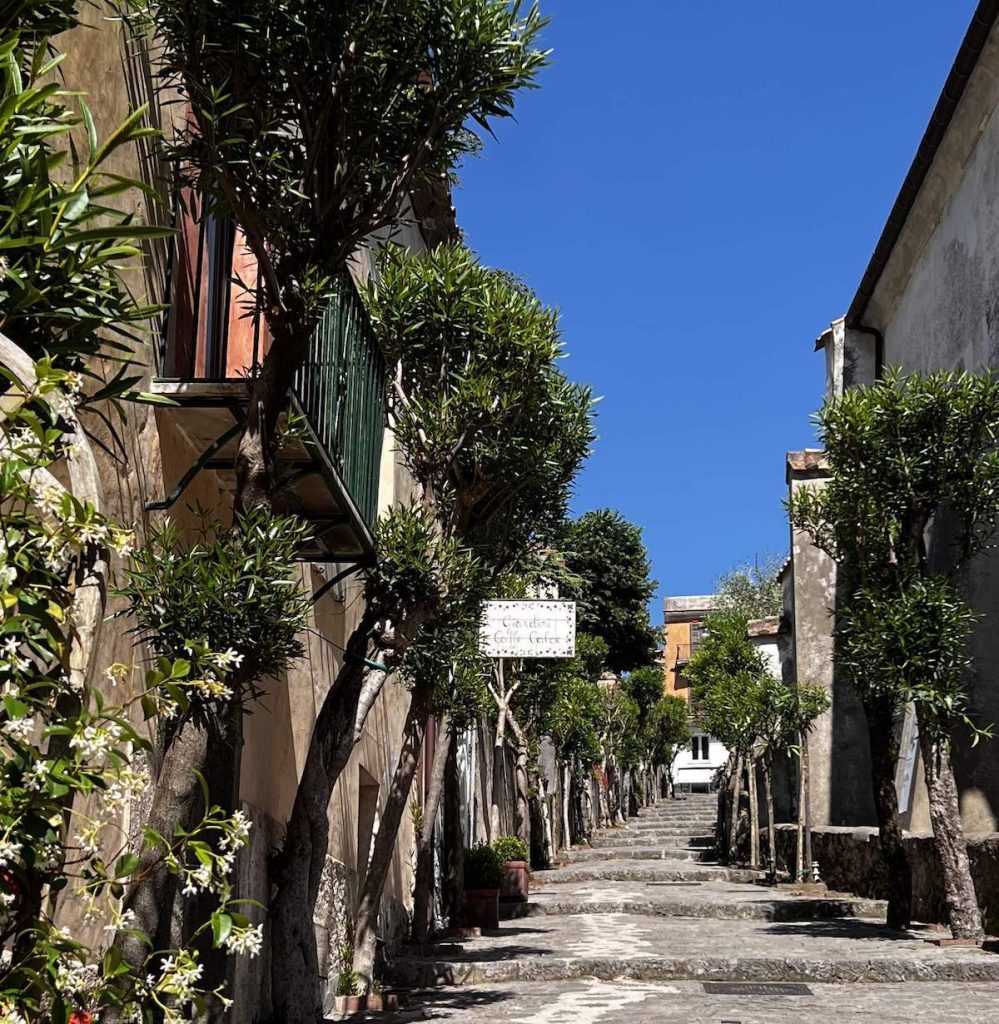 A tree-lined street in Ravello

Maybe that’s why Ravello, farther down the Amalfi Coast and therefore out of reach for cruising day-trippers, was my favorite destination. With a population of just 2,500 residents, Ravello perches on a 1,200-foot plateau above the Tyrrhenian Sea.

Pedestrian lanes radiate from the main square, passing sleepy villas and private estates to Villa Cimbrone, now a hotel with a magnificent English landscape garden and sweeping views of the sea. 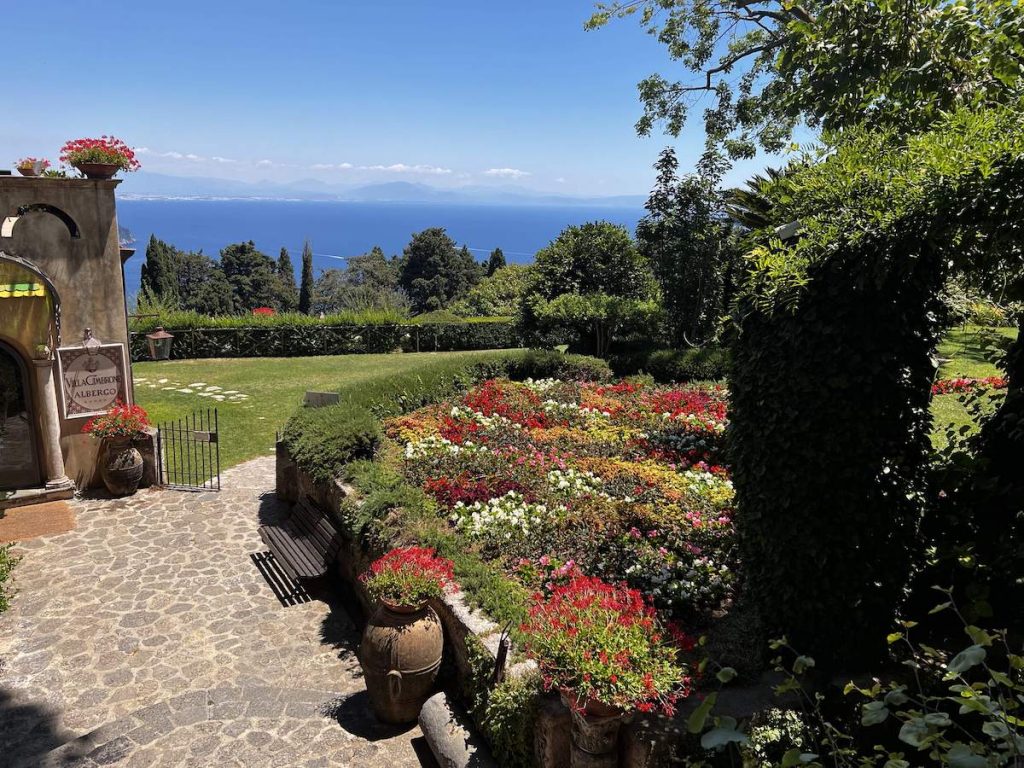 Villa Cimbrone dates back to the 12th century, but its gardens, open to the public, were designed by an English nobleman in the early 20th century

Naturally, I’m not the first to rave about Ravello. Plenty of celebrities have found refuge here, including Greta Garbo, Virginia Woolf, D.H. Lawrence, Gore Vidal, and Jackie Kennedy, who spent a few weeks here in 1962 with her two children, a sister, and brother-in-law.

Beat the Devil (1953), directed by John Huston, brought Humphrey Bogart, Jennifer Jones and Gina Lollobrigida to various film locations in Ravello, including Villa Cimbrone and the main piazza with its Duomo.

Perhaps these visitors, too, found inspiration on the Amalfi Coast. And maybe even a little love.

Limoncello 101: Where to try it and how to make your own

Disclosure: The author paid for her trip herself 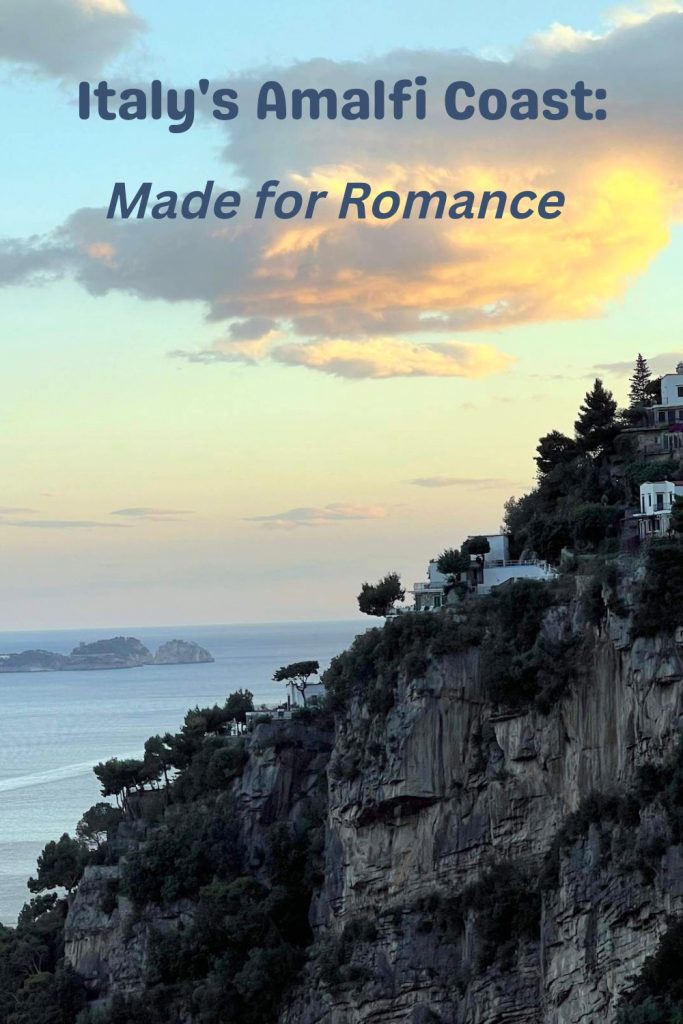