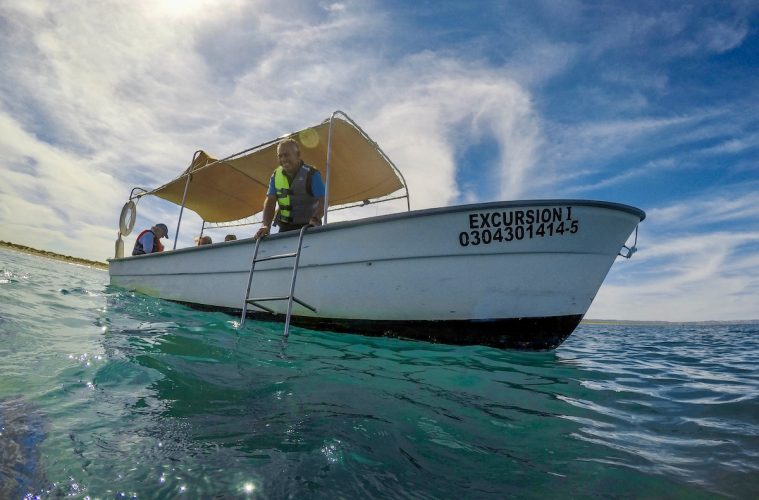 The gentle giant covered in white spots swims near the surface of the Sea of Cortez, his big mouth open to filter-feed on all the luscious plankton and tiny micro-organisms, seemingly undisturbed by my presence in the 75-degree water.

It’s as if this young but wise whale shark knows that even my fastest strokes are no match for his languid pace. Buoyed by my borrowed wetsuit, but out of shape and without my glasses, I just can’t seem to keep up with the world’s largest fish like my two friends are doing. 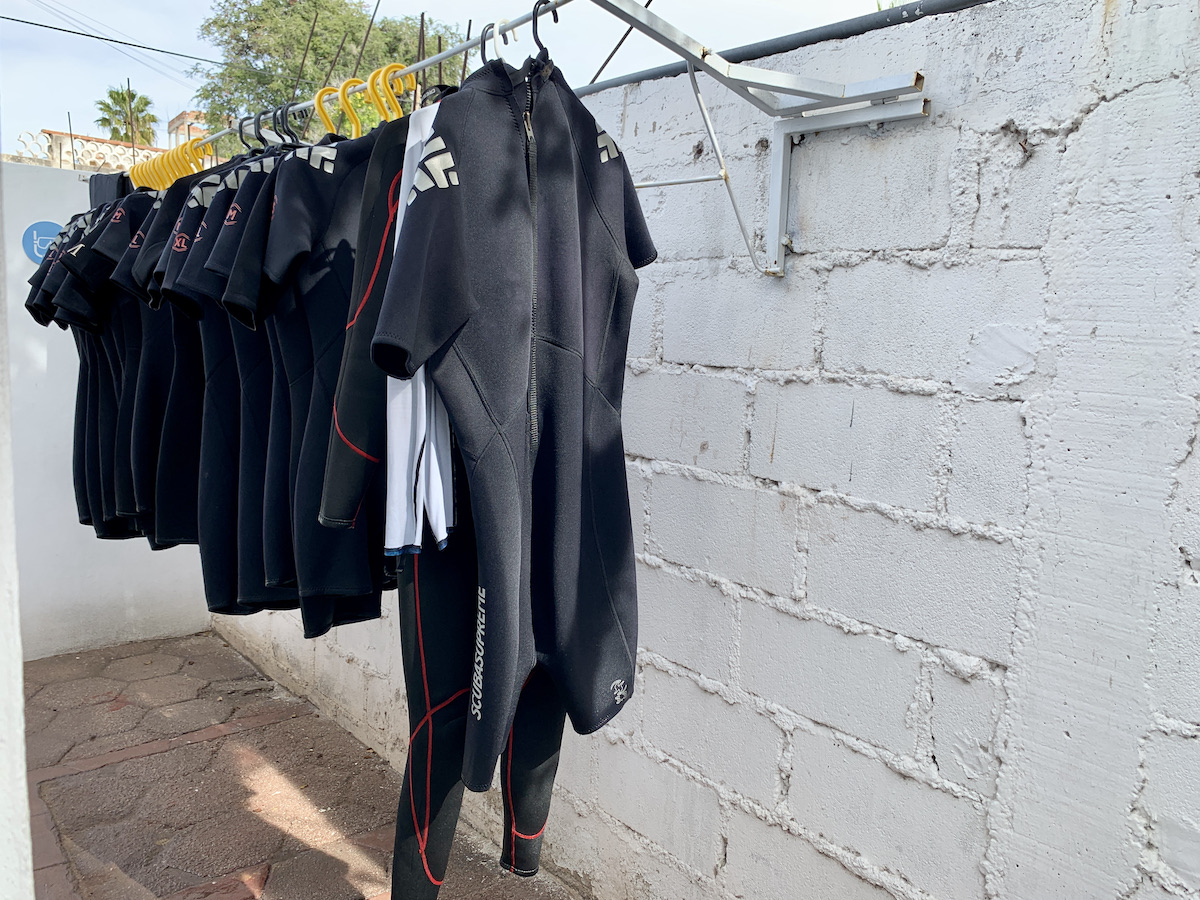 Twice I slip out of the small tour boat on command, tread water briefly and then take my place a safe distance from one of the four corners of the whale shark. Twice I am left behind. 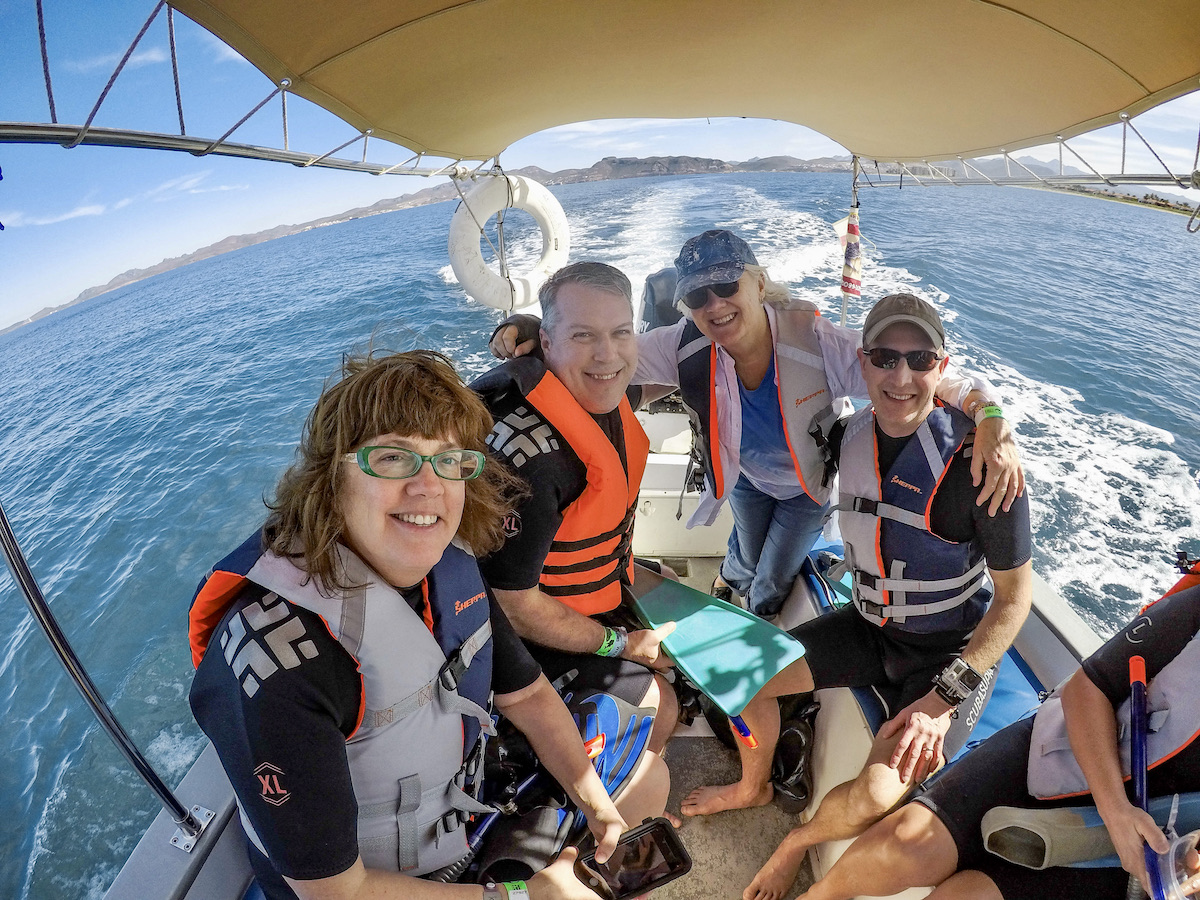 Whale shark encounters are big business here, but they’re also tightly regulated. I’ve come to Los Cabos because I know these compelling filter feeders congregate in the warm water between September and April. Cabo Adventures will take care of the four-hour, round-trip drive to and from La Paz, the capital of the Mexican state of Baja California Sur. The city is on the Sea of Cortez (aka the Gulf of California), the narrow body of water between the Baja California Peninsula and the Mexican mainland.

As the world’s largest shark and largest fish, whale sharks (Rhincodon typus) typically grow up to 40 feet long, weigh up to 20 tons, and never stop moving

Hernandez explains how a spotter goes out each morning and relays sightings, how we must swim with a guide and in small groups, and how we will get three or four brief stints in the ocean. Whale sharks are loners, which means one boat per fish, and our guides will look for the “laziest” ones. 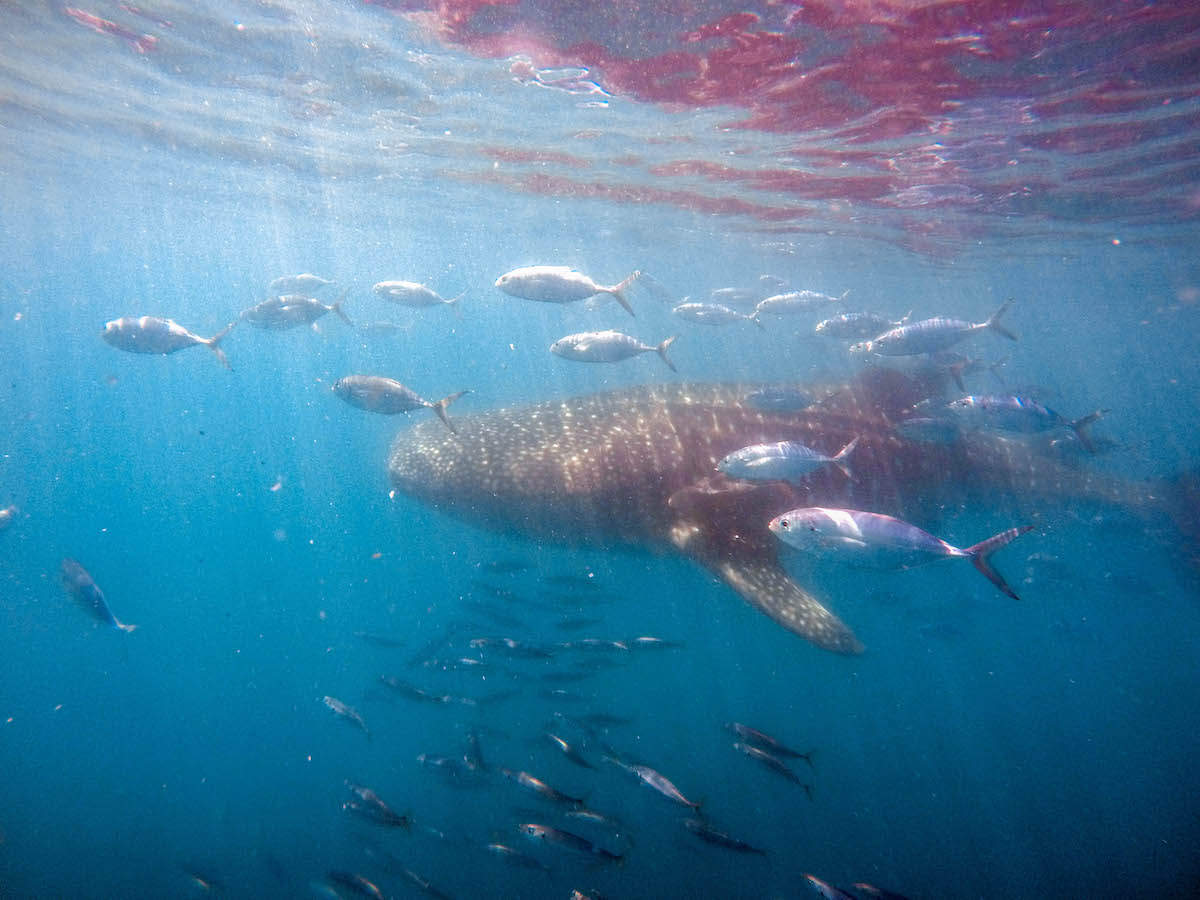 As the world’s largest shark and largest fish, whale sharks (Rhincodon typus) typically grow up to 40 feet long, weigh up to 20 tons, and never stop moving, but they can’t swim faster than three miles an hour. Other characteristics include thousands of tiny teeth, a half moon-shaped tail fin and skin that can be up to four-inches thick. Despite all those teeth, this docile  “shark” can’t bite or chew.

According to the World Wildlife Fund (WWF), whale sharks can process more than 1,585 gallons of water an hour through their gills. Their mouths can stretch open four feet, but their teeth can only eat small shrimp, fish and plankton by using their gill rakers as a suction filter. 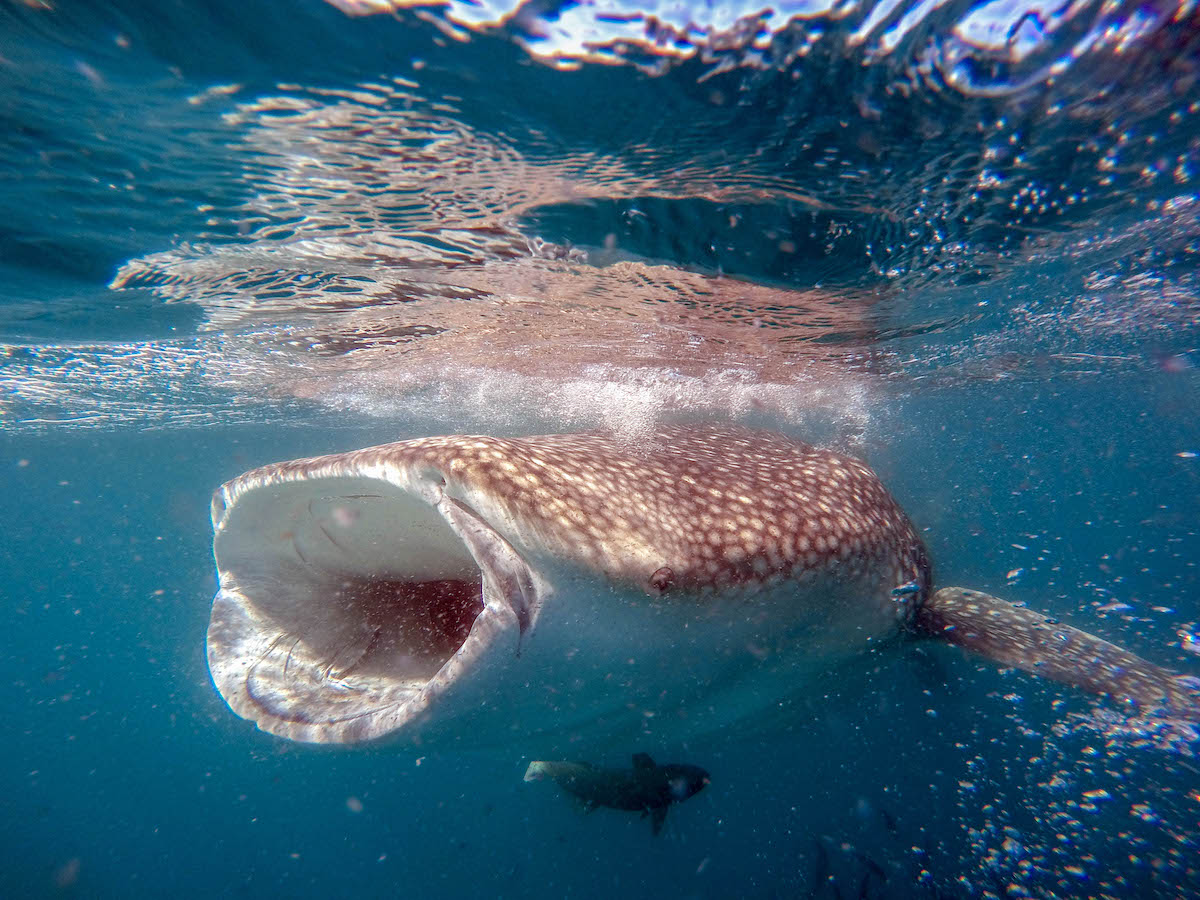 “They don’t see very good but they do smell very good. They’re like sharks — they smell everything out there,” says Hernandez, quickly adding: “They are filter feeders so there’s nothing to worry about — they don’t like white meat.” 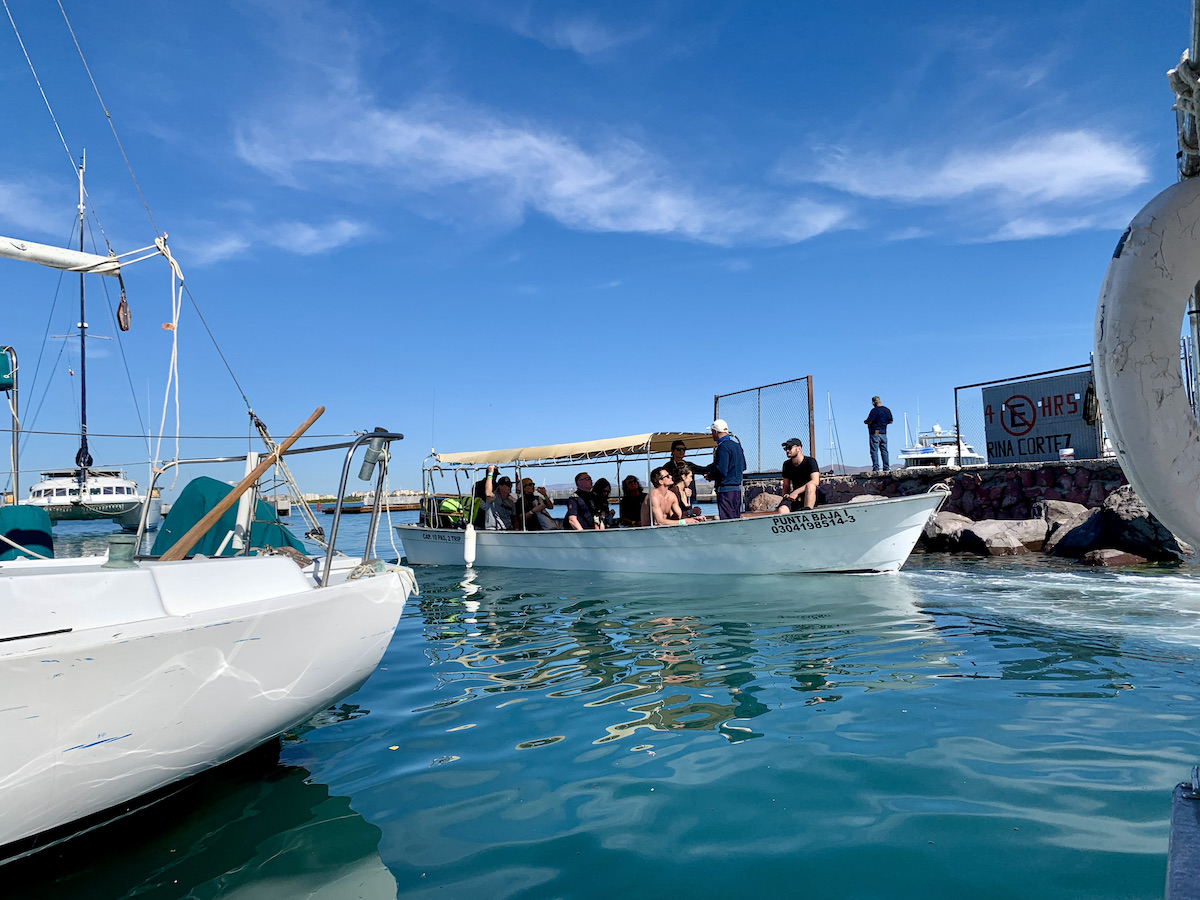 As we mill about the small office in La Paz, getting fitted for wetsuits, fins and snorkels, I study two posters full of rules.

“Watch, don’t touch,” is the big one. “Whale sharks are an endangered species protected by Mexican bill NOM-059-SEMARNAT-2001. If anyone deliberately touches a whale shark, we will immediately return to shore.”

Photos are fine, but flashes must be disabled because whale sharks don’t have protective eyelids. Don’t feed the marine life, litter, take anything from the sea or touch coral — all obvious rules — and only wear biodegradable sunscreen. Don’t jump from the boat — just cautiously slip out. Don’t scuba or free dive. Wear a lifejacket and/or wetsuit.

Our bus load is divided into smaller panga boats commonly used here for water taxis. With more than nine whale sharks in the area today, 14 licensed boats from competing companies can go out at a time. We have seven adventurers in our boat — including one with an arm cast who can’t swim — and further subdivide into two teams to take alternate turns in the water. 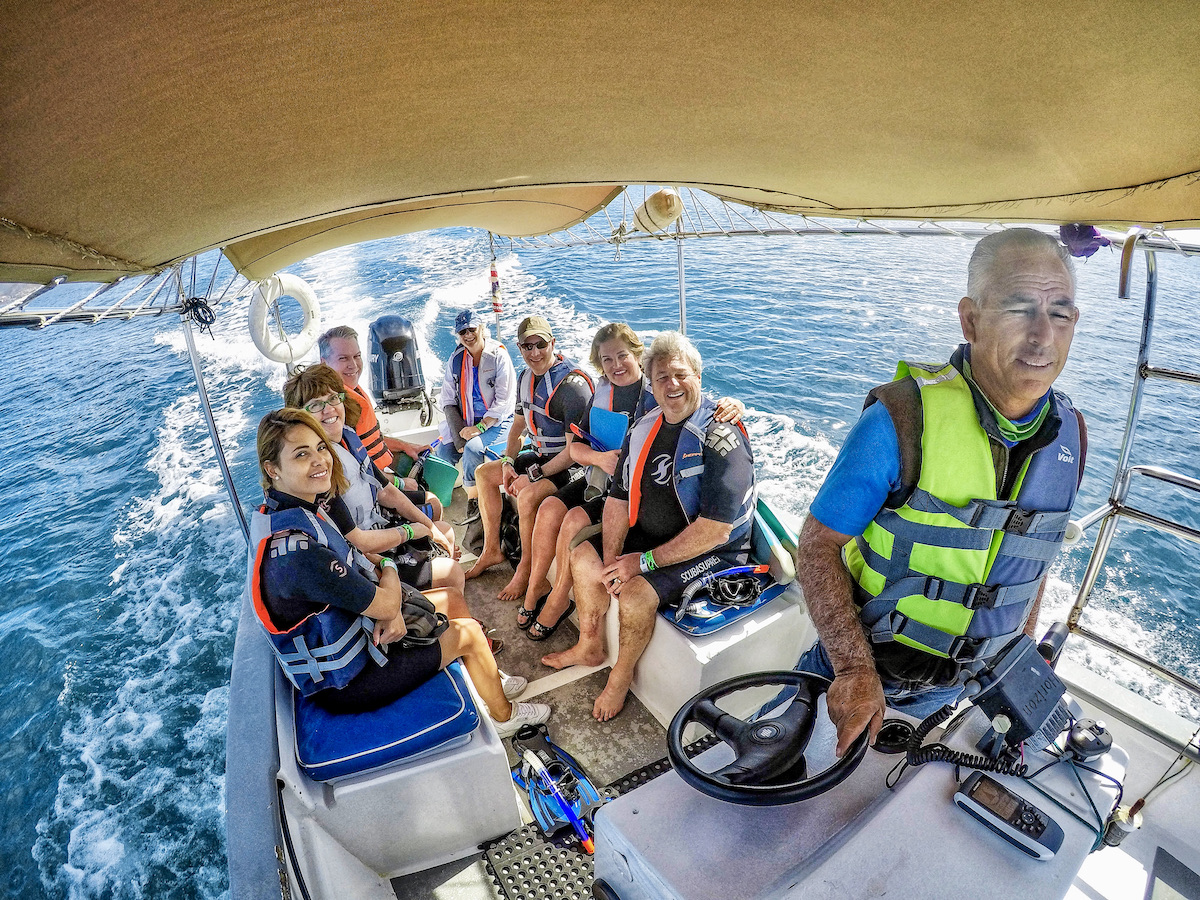 Swimming alongside an endangered species

At 10:45 a.m., Captain Jorge Sanchez leaves shore and heads to a checkpoint where a natural resources officer with a clipboard makes sure you’re wearing lime green wristbands with pictures of whale sharks. “Whit your Green Brazalet [SIC] you’re part of the Whale Shark conservation,” a bilingual sign promises.

Whale sharks are listed as endangered on the IUCN Red List of Threatened Species, and global threats include oil and gas drilling, shipping lanes, fishing and harvesting, and recreational activities. The WWF says demand for whale shark meat, fins and oil, particularly by unregulated fisheries, is a threat. These fish can be victims of bycatch, accidently caught in fishing gear. 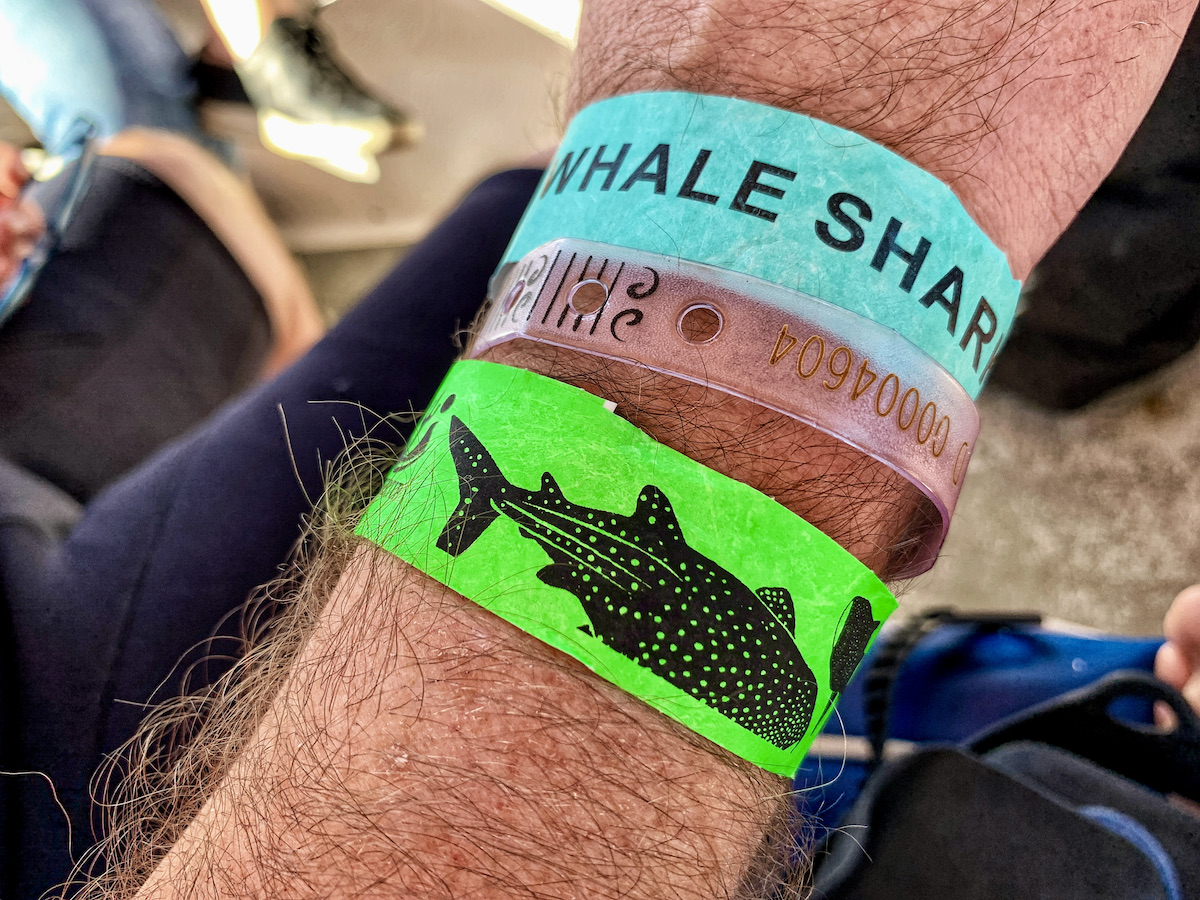 Tourism can interrupt their feeding and sharks can be injured by boat propellers. In Mexico, the group educates tourists on codes of conduct for swimming with sharks and works with tour boat operators to reduce collisions. Whale Shark México monitors the situation in La Paz Bay and works with the government on a code of conduct and training for tour operators in this critical habitat.

Hernandez remembers when an improved highway between Los Cabos and La Paz sparked the first whale shark encounter season in 2013. Back then, they got just six to eight guests every three days. To cope with today’s high demand, there are now about 250 licensed guides and 120 boat permits (or flags) for this area. About 7,000 hectares (more than 17,000 acres) of the bay is a whale shark reserve zone. Tours operate only between 9 a.m. and 5 p.m., and there are strict speed limits.

On busy days in peak season, people might wait up to five hours for a turn to enter the whale shark zone on the water. But it’s a slow day in January, and we wait only 24 minutes.

My turn to swim with the whale sharks 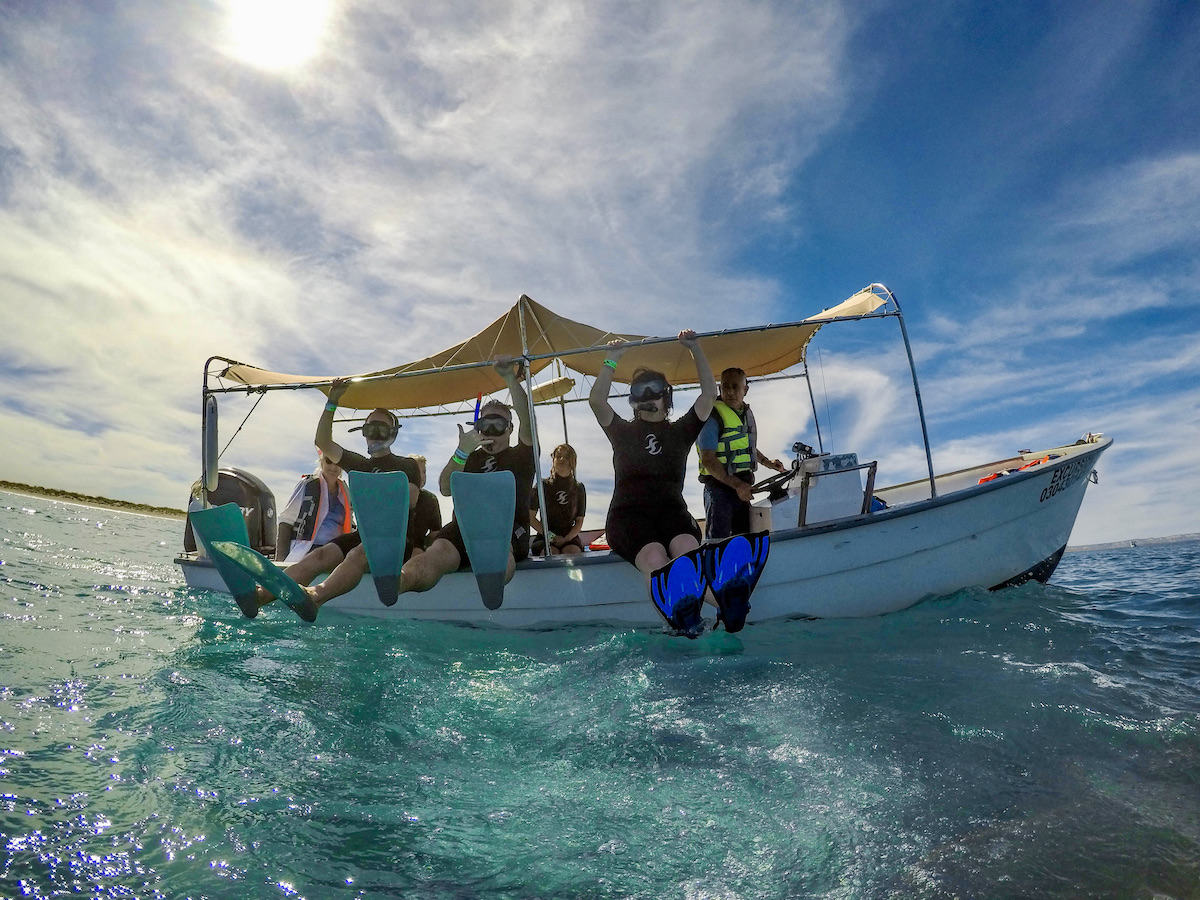 Getting ready to jump and wait for a whale shark (credit: Cabo Adventures)

When the captain spots a whale shark just 15 minutes later, he pulls ahead of it, but parallel and at a safe distance. Three of us sit on the edge of one side of the boat and then quietly slip, one by one, rear to front, into the calm sea without making a big splash. We swim away from the boat, get a quick refresher on emergency signals, and await the guide’s signal to take off and follow our big, beautiful fish for as long as possible. My two friends will be on the left of the whale shark, and the guide and I on the right. We are “never on top, never in front, never underneath” and must steer clear of the powerful tail fin. 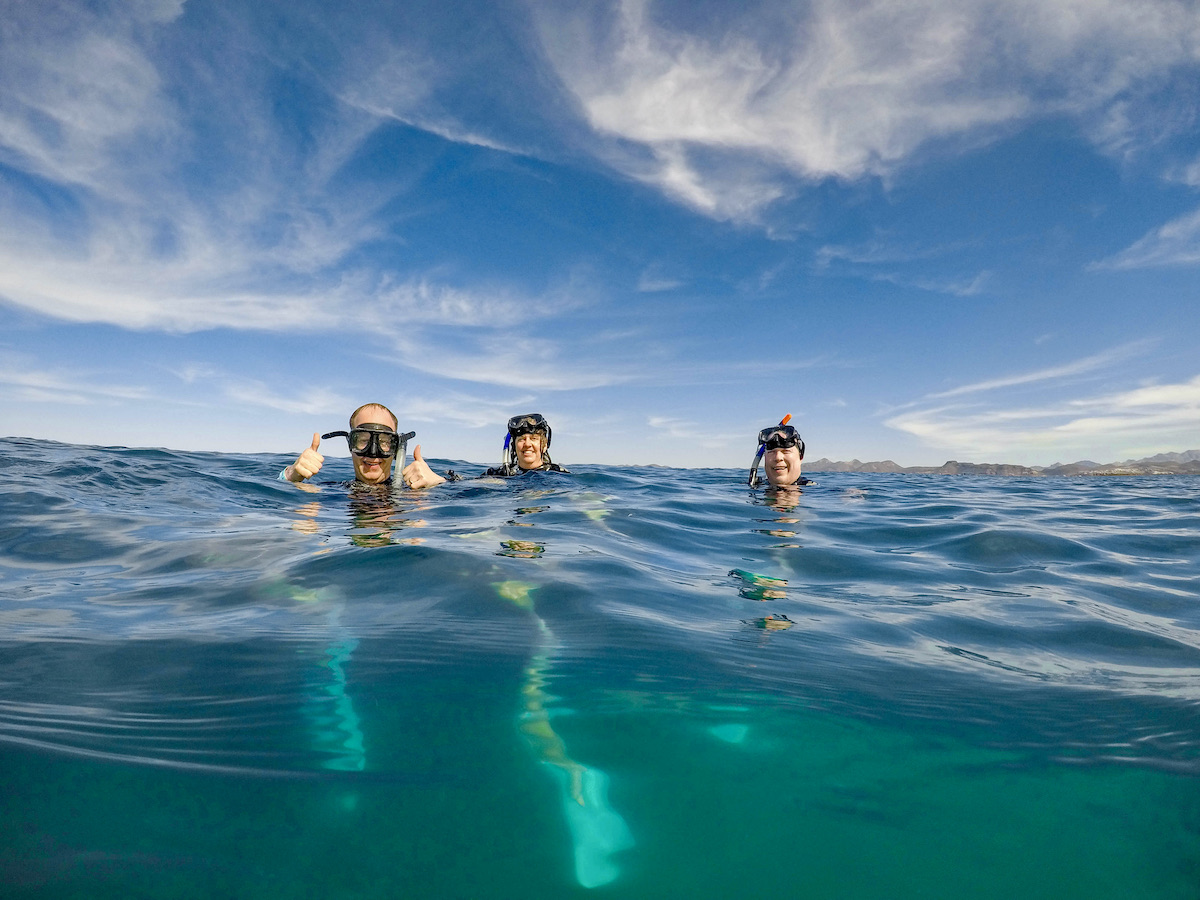 “It is chaotic, especially the first attempt,” Hernandez warns.

That’s the perfect word for my first failed encounter. The 75-degree water isn’t as warm as it sounds so I’m lucky to have the optional wetsuit, but the combination of it and a lifejacket slows me down.

“It gets better every single time,” promises Hernandez after I climb dejectedly back into the boat. I ditch the lifejacket for round two, but while I’m much more agile, I still don’t quite get what I’m supposed to do. 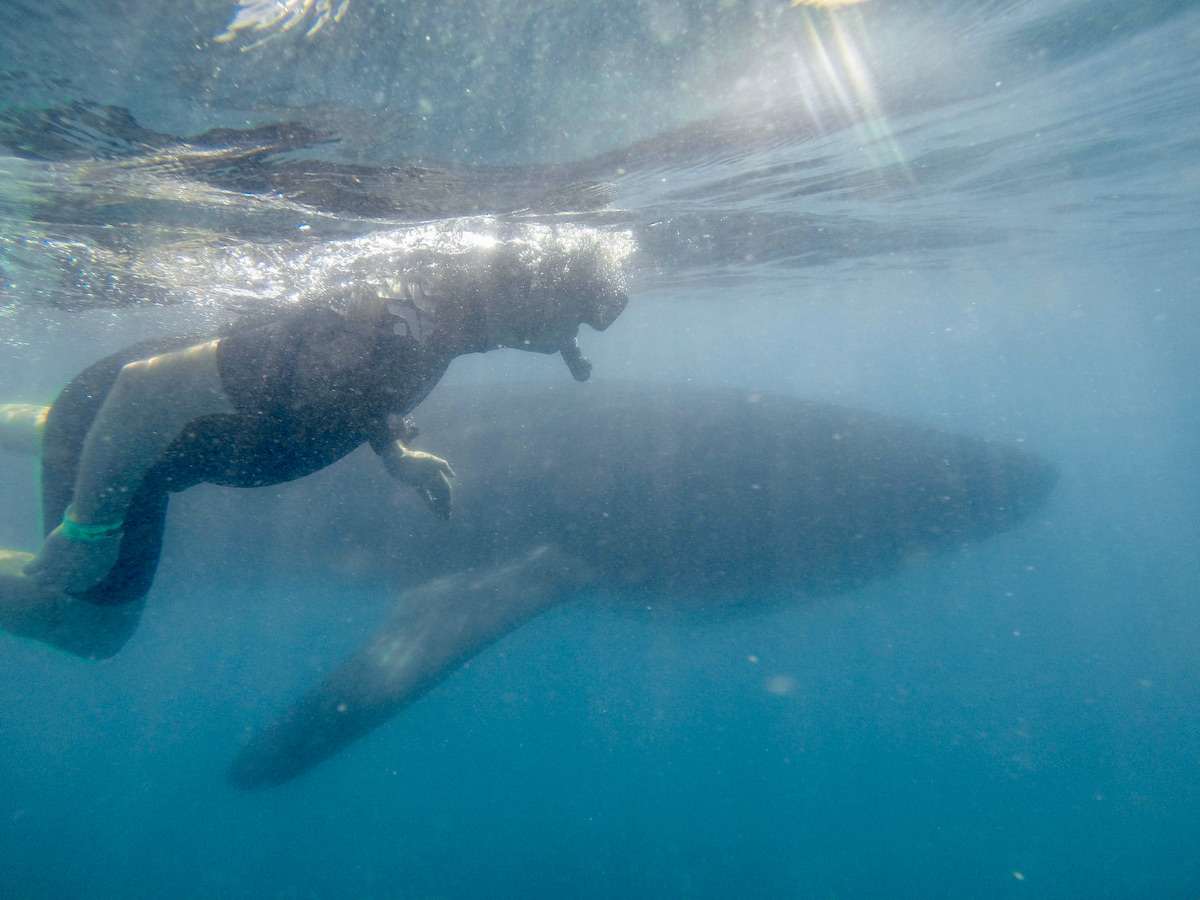 The third time’s always a charm, though — but only because the super-fit Hernandez takes pity, grabs my arm and tows me. I don’t remember whether I furiously kicked or what I did with my other arm, or how long the encounter lasted, only that I surrendered and co-existed ever so briefly with the largest fish in the sea.

A unique pattern of spots and stripes on its skin distinguishes each whale shark. Each time I get in the water, I’m told it’s actually with the same 20-foot juvenile male.

The key, says Hernandez, is to blend in like a remora, the fish species that attaches itself to sharks, marine mammals and even ships. “When somehow you feel chill and calm right next to something like a whale shark, they chill with you as well.”

And so, on my fourth and final dip in the Sea of Cortez, I channel my inner remora while keeping a respectful distance from the whale shark I can barely see but will never forget. 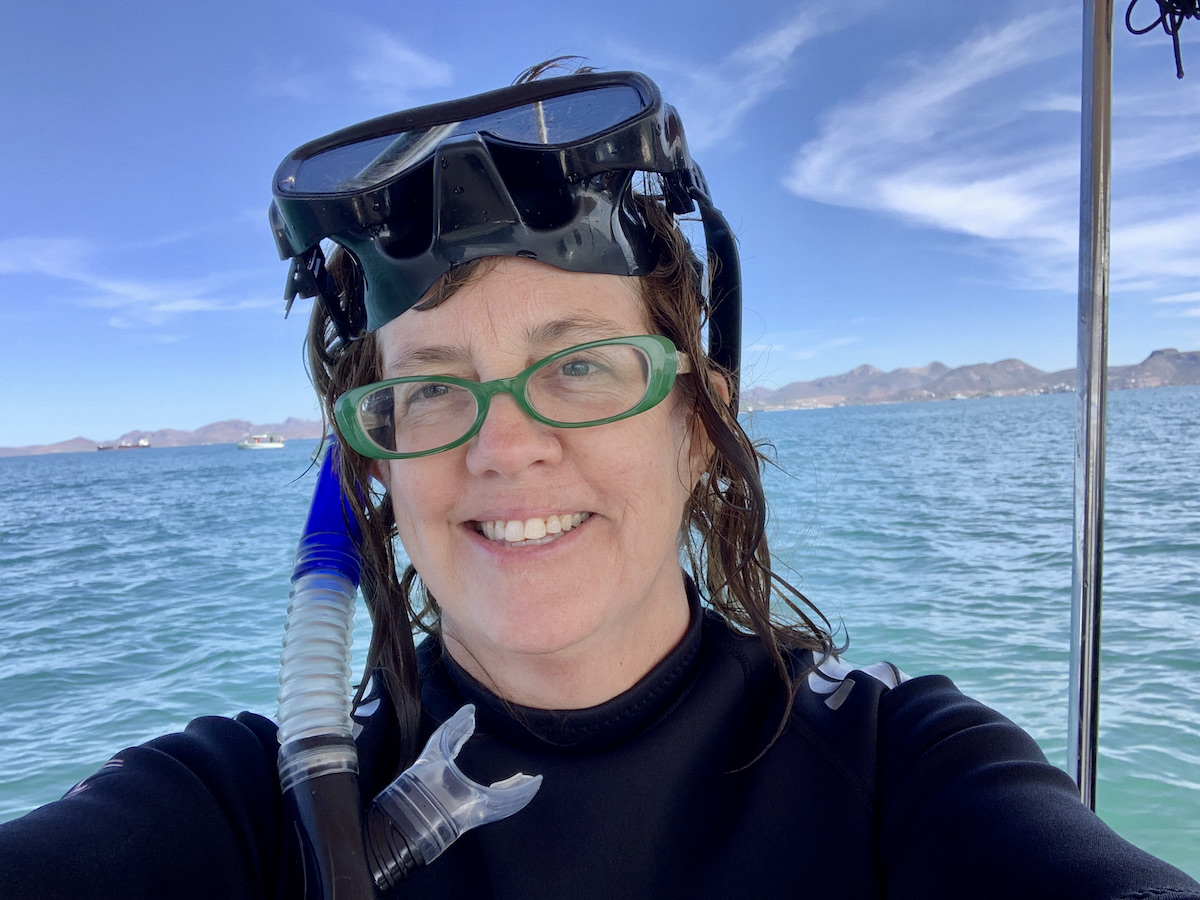 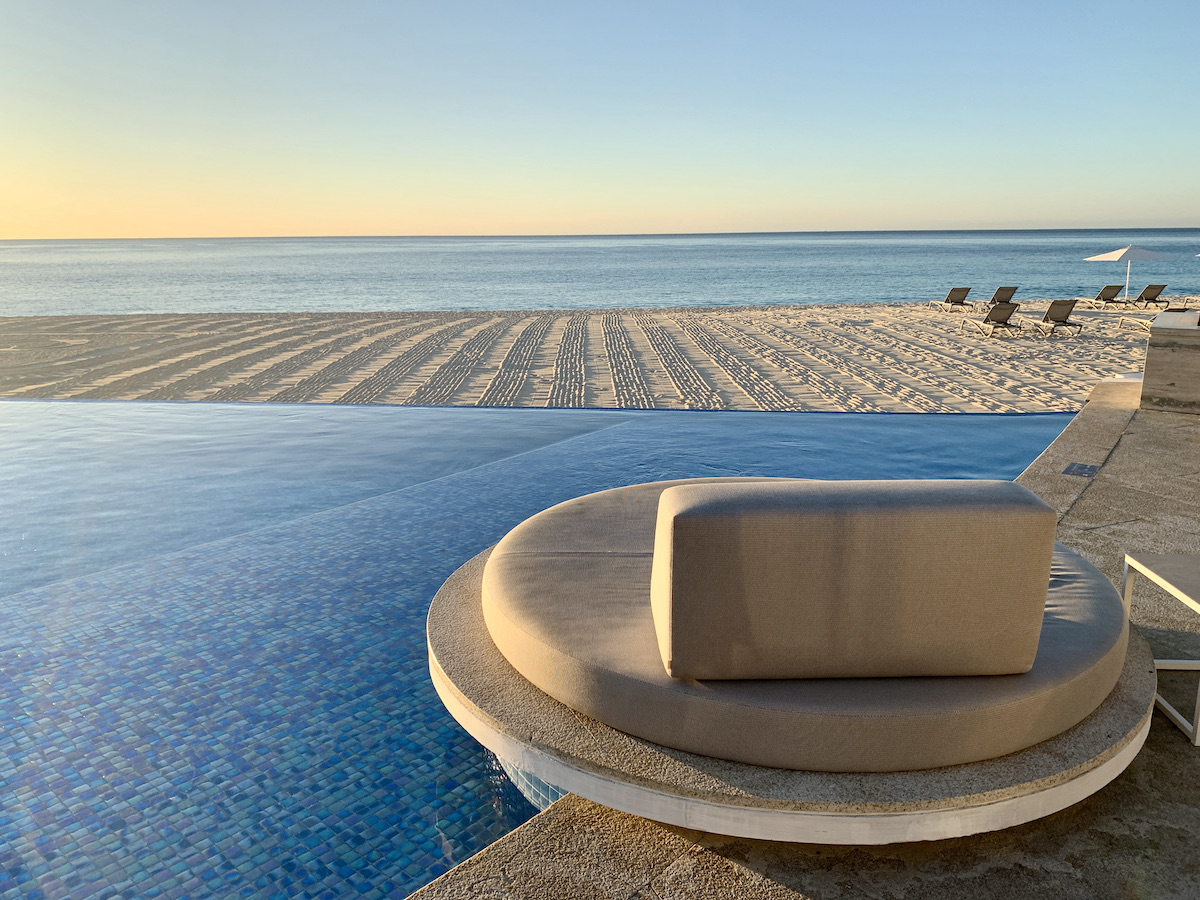 A COVID-19 Update: What You Need to Know

Los Cabos Tourism hosted the author, but any opinions expressed in this post are her own. 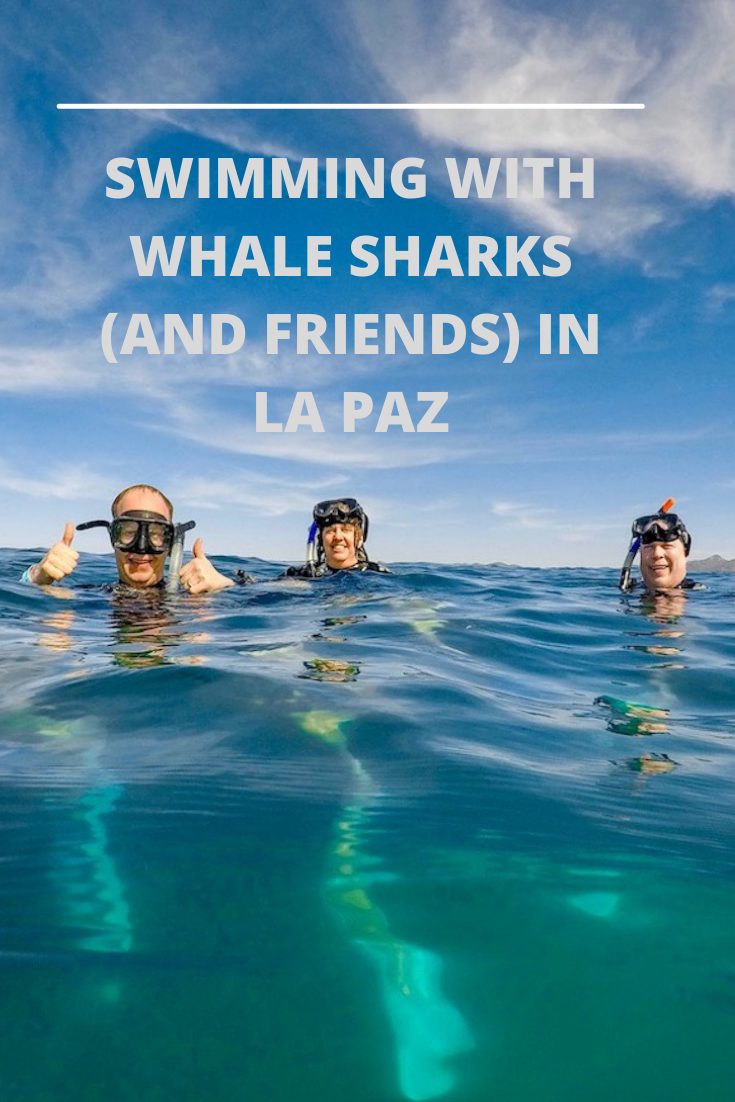