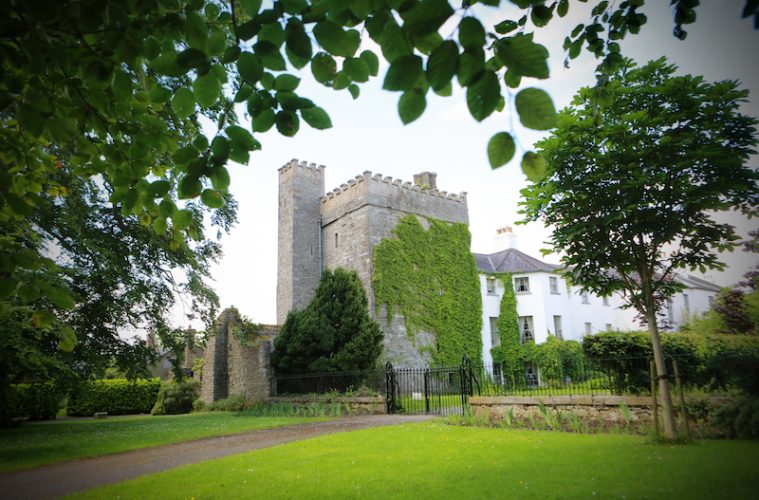 Sleep in an Irish castle hotel with a rock star connection

Like most people traveling to Ireland on overnight flights from North America, I arrived at Barberstown Castle, a luxury Irish castle hotel in County Kildare, jet-lagged and fuzzy headed. When I found out my room wasn’t ready yet—it was only mid-morning—I envisioned a grumpy hour or so camped out in the hotel’s small lobby or pretty garden.

Then I discovered the Garden Bar and realized my wait was going to be far from a trial.

Playing lady of the manor at an Irish castle hotel

I’d barely taken my seat in a red-and-blue wing chair before a server materialized, asking if I would like a cup of tea.

The first rule about traveling in Ireland: You are never far from a kind soul offering you a cuppa. For a tea granny like me, it’s pretty much heaven. 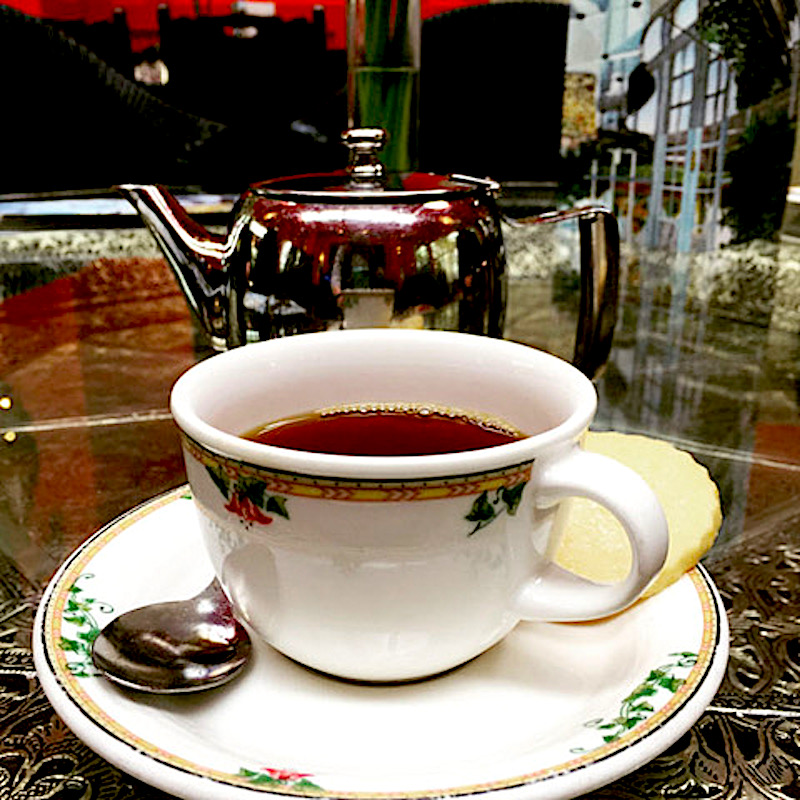 A restorative cup of tea in the Garden Bar was the ideal cure for jet lag. (Credit: Laura Paquet)

Tea duly ordered, I relaxed and took stock of my surroundings. Walls painted a vibrant shade somewhere between red and salmon. Skylights. Brass light fixtures. A grand piano, Raj-like screens, patterned rugs and a fireplace with a Regency-style surround. And, at the far end of the room, a glass conservatory housing a bar. Just beyond the conservatory’s windows, one of the castle’s two golden retrievers was basking in the sun. 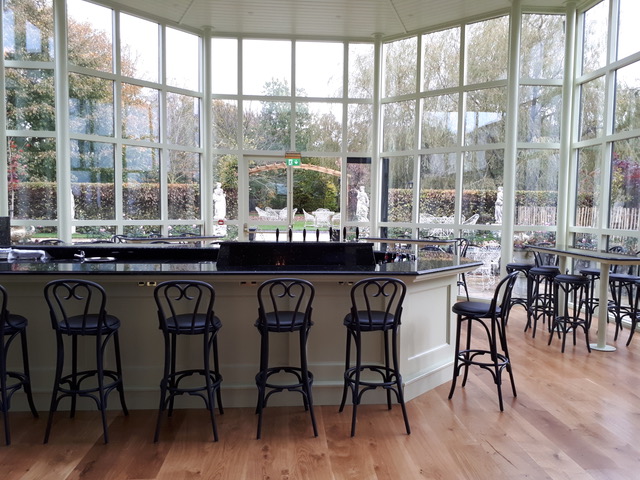 The Garden Bar Conservatory is a fine place to relax with a cup of tea when staying at Barberstown Castle.

Despite being in a different country with a troubled (to say the least) relationship with Jolly Olde England, it all felt rather Downton Abbey-esque. I half-expected Mr. Carson to arrive with a freshly ironed newspaper.

From noon until 10 PM, the Garden Bar serves tasting plates such as potato-and-onion tortilla and tempura prawns with lemon confit mayonnaise. However, my room was soon ready and I was hungry for something a bit more substantial. A friend and I took off by cab for a tasty chicken curry at Brady’s Clockhouse pub, in the nearby town of Maynooth.

Thus restored, I had the energy to unpack and unwind, once I returned to the hotel. My room sustained my fantasy that I had time traveled to a country estate between the wars—if you can go back to the past and also enjoy decent wi-fi and a small flat-screen TV.

A room with a view

As is the case in many Irish hotels, the bathroom plumbing was an intriguing puzzle—to this North American, at least. Once I realized that the two small objects sticking out of the wall were a toilet-paper holder and not temperature controls, I was most of the way toward navigating the picturesque assortment of porcelain-and-nickel faucets inside the shower that would eventually allow me to wash my hair. 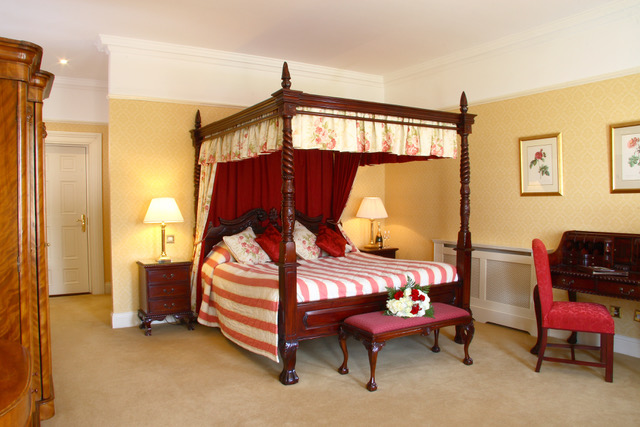 The plush rooms at Barberstown Castle are fitting for an Irish castle hotel.

The word that kept coming to my mind to describe the bedroom was “plush.” With its deep cream-colored carpets, thick flowered drapes with tasseled pelmets, matching burgundy wing chairs and four-poster bed, it was a bit like a posh cocoon for social butterflies. The secretary desk made me wish I had some long missives to write. And the view from my window, toward the castle’s medieval stone tower, reminded me that many of the previous residents of this spot didn’t enjoy anything close to this level of comfort.

Not unusual for an Irish castle hotel, the property actually comprises a number of buildings, constructed in various centuries. Owner Ken Healy, who bought the property in 1987 from perhaps its most famous owner (more on that shortly), toured a group of writers through the hotel and illuminated its long history. “I’m not an academic, so you have to take what I say with a grain of salt,” he warned us with a grin. 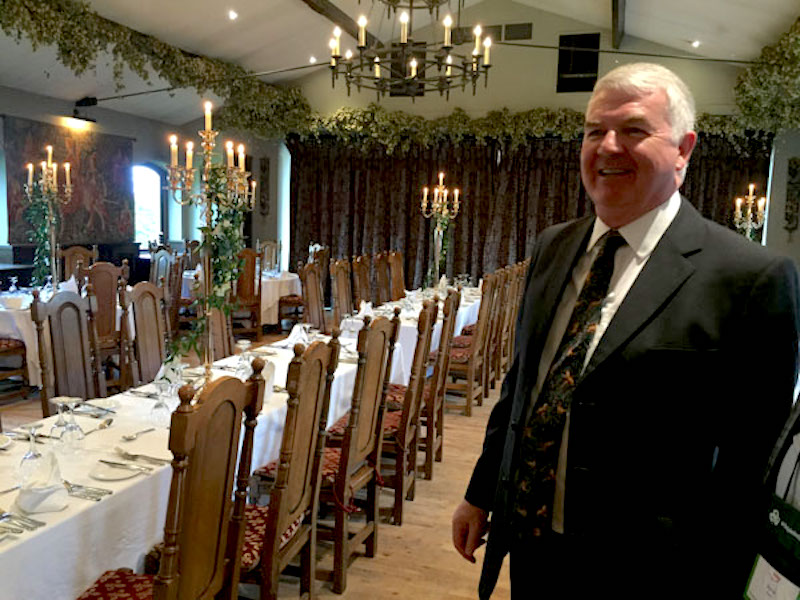 “It’s a very, very old place, and it was at the center of all the activity in the entire area for many, many years,” he explained. Anglo-Norman Nicholas Barby built the first castle on this site in the late 1200s to defend his lands. (The Normans had previously grabbed the lands from the local Uí Fáeláin dynasty, much to the latter’s displeasure.) Over subsequent centuries, Barby’s modest fortification was replaced by the stone tower, and other bits were added. 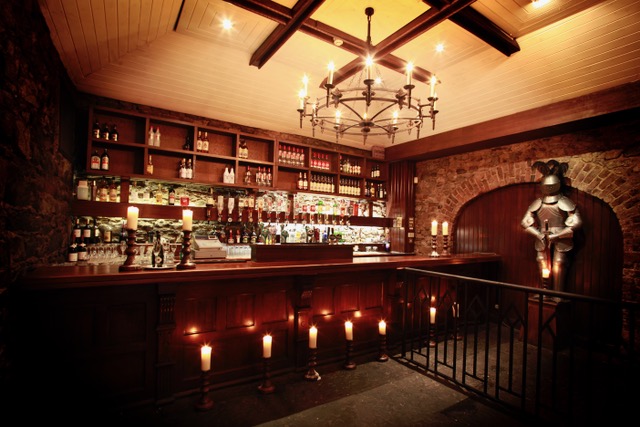 The Banqueting Hall at Barberstown Castle dates from 1553.

The Banqueting Hall, built in 1553 and now decorated with replica tapestries, hosts weddings and corporate events. “We had one guy who actually came back and got married here twice,” Healy recalled. (No word on what wife #2 thought of reliving wife #1’s special day, although Healy did note, “We do good divorce parties, as well.”)

Cool as it is, the Banqueting Hall is far from the only fascinating spot in the 55-bedroom Irish castle hotel.

There’s also the Elizabethan House, where low doorframes are a reminder that poorly nourished Elizabethans were much shorter than we are. There’s an old cottage in the courtyard that is being transformed into a pub. We didn’t even see the castle’s secret tunnel, former chapel or “priest’s hole”—a hiding place for Catholic clerics during the centuries when the English attempted to suppress Irish Catholicism.

The whole property is like a rambling rabbit warren of architectural and social history.

Oh, and did I mention that the castle once belonged to Bartholomew Van Homrigh, a former mayor of Dublin, whose daughter Esther became Jonathan Swift’s lover? Or that a member of the famous Barton & Guestier wine family once owned the place? In 1826, Henry Barton built another portion of the castle that now serves as the hotel’s fine dining restaurant, the Barton Rooms. I didn’t have the chance to have dinner there, but I loved the hotel’s breakfasts—especially the whole-wheat bread and smoked salmon.

Run by a rock star

The castle’s best-known former owner is likely Eric Clapton, who bought the property in 1978, seven years after it was first turned into a hotel.

“He ran it as a hotel, but it was more like a shebeen [an old Irish word for a late-night speakeasy],” Healy said.

“There was a piano here, and all the famous people of the rock music world arrived in here at some stage or other, over the years, and played and sang in here. So, you could walk in here some night and find Eric Clapton and George Harrison just strumming along.” Indeed, the list of former hotel guests reads a bit like the lineup for a mind-blowing fundraising concert, including everyone from Mick Jagger and Mark Knopfler to Bob Dylan.

So, someone asked Healy on our tour, does the castle have a resident ghost?

“What room are you in?” he replied, to loud laughter. “There’s [been] people living here for a long, long time, so if there’s such a thing…then it’s probably here.” 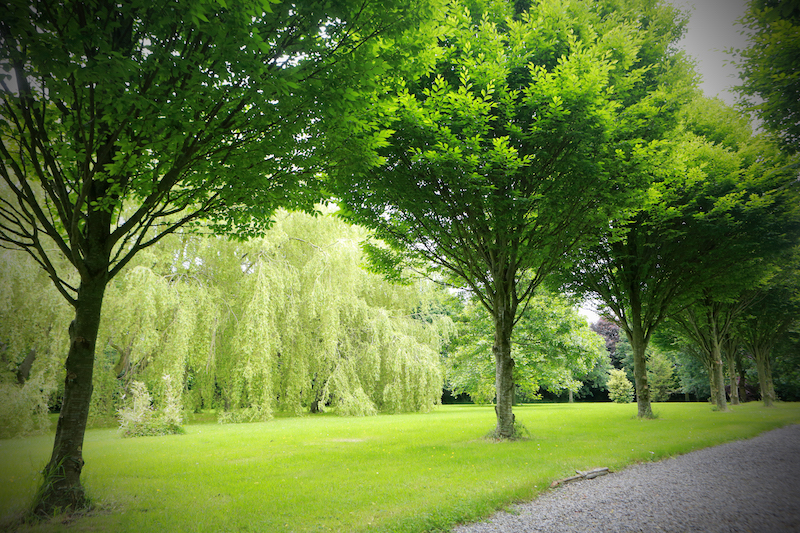