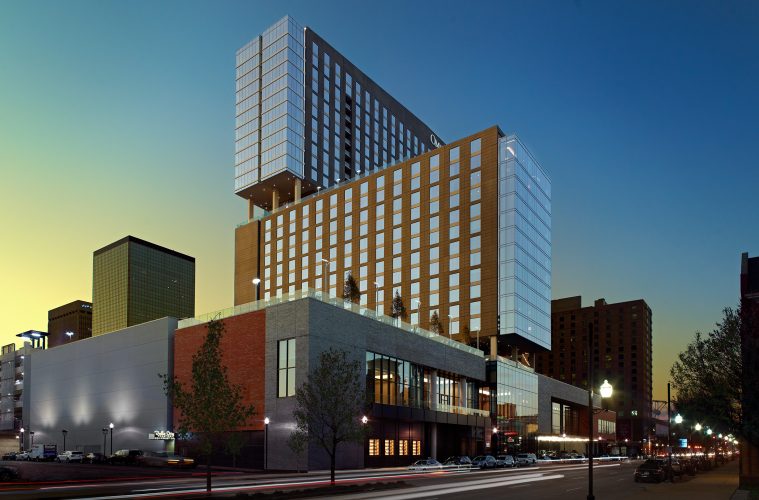 Every year thousands of people descend on Louisville for the Kentucky Derby. During our springtime visit, the only horses we saw were painted statues scattered throughout the city, but we found plenty of other reasons to visit Louisville.

We timed our trip to coincide with a different event—the Humana Festival of New American Plays, but that isn’t the only reason to visit Louisville, Kentucky.

The internationally renowned festival occurs over a six-week period at the Actors Theatre of Louisville. Celebrating more than four decades of nurturing new contemporary works, the Humana Festival plays have gone on to win three Pulitzers and countless awards.

While sitting in the audience, you might find yourself conversing with a producer, playwright, or a professor. More than 38,000 people attend the festival, which hosts special weekends for college students and for industry professionals. By purchasing a ticket, you’re supporting the creation of American theater.

The plays are staged from Wednesday through Sunday, with several running back-to-back. The shows start mid-afternoon and conclude after midnight. Patrons conceivably can see all five world premieres in two days.

We opted for a more leisurely four-day stay, giving us ample opportunity to see several plays and experience Louisville. 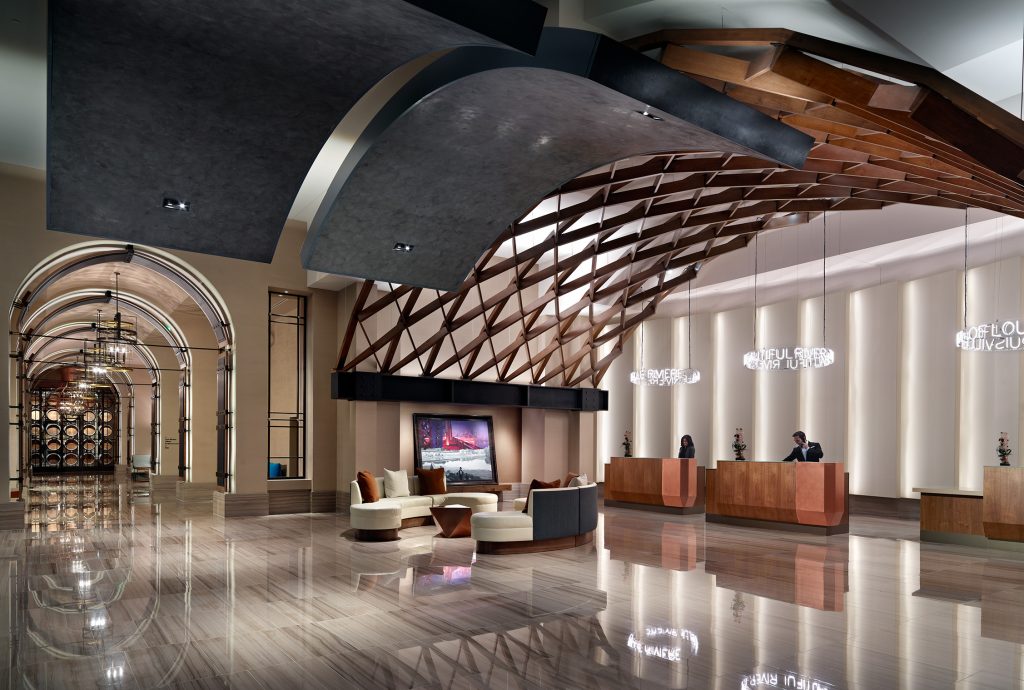 The talk of the town is the Omni Louisville, which opened in March 2018. The $320-million property’s intersecting soaring towers transformed the city skyline.

The stunning lobby, inspired by the shape of a whiskey barrel, makes an elegant first impression. Guests gravitate to the Library Bar, with a modern fireplace and dozens of cozy seating arrangements. A speakeasy, Pin + Proof, is hidden down a hallway. The intimate bar, serving vintage cocktails and nostalgic bites, features four professional-size bowling lanes.

The hotel, with 612 guest rooms and 225 apartments, also has two restaurants, an art gallery, retail shops, a rooftop swimming pool, fitness center, and the Mokara Salon & Spa. Room service and valet parking are available. The 20,000-square-foot Falls City Market, connected to the lobby, offers a variety of dining options. These range from a taco truck and barbecue to a gourmet grocery store and a bakery.

Our deluxe guest room featured floor to ceiling windows and a minibar stocked with curated bourbons. 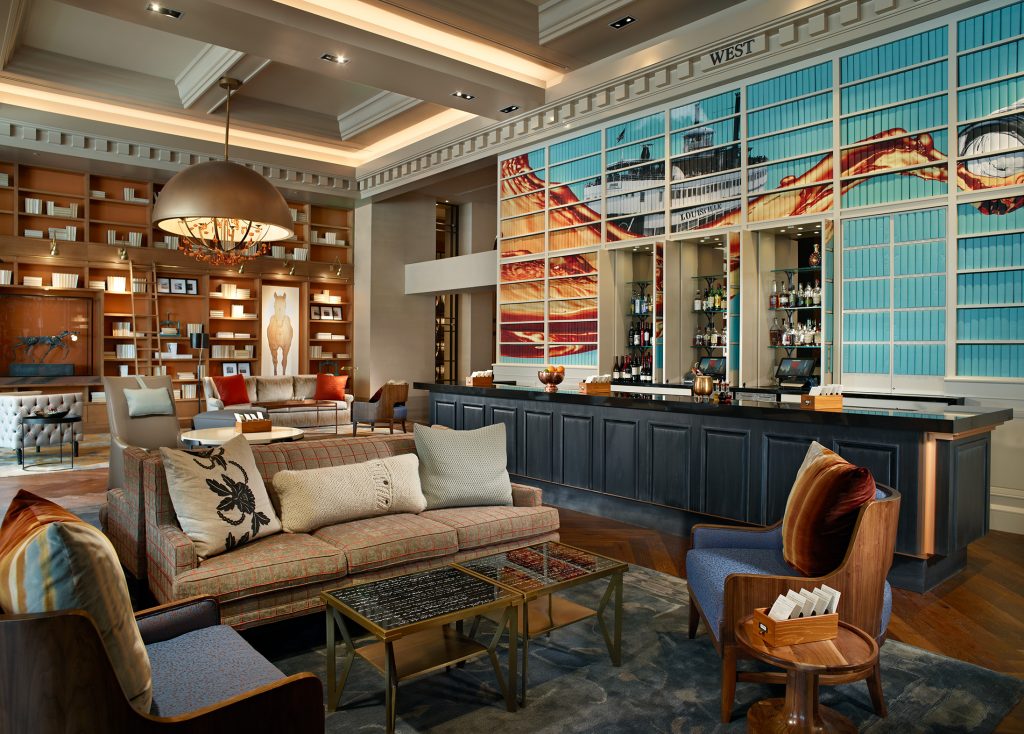 My husband drank more old fashioneds during our four days in Louisville than he has in a lifetime. This classic is the city’s official cocktail, and the Pendennis Club asserts it was created there in the 1880s.

I didn’t count, but we did enjoy sampling cocktails from the bars and restaurants along the Urban Bourbon Trail (UBT). More than 40 establishments, each stocking 50 or more types of bourbon, are selected each year and featured in the UBT Passport.

Pick up a free passport at the Louisville Visitor Center (4th & Jefferson Streets downtown) or at any participating member. Have it stamped every time you make any type of purchase (it doesn’t have to be a cocktail). After earning six stamps, redeem them for an Urban Bourbon Trailblazer t-shirt.

Using our passport as a guide, we ate bison burgers at Proof on Main, which earned Best Restaurant status from Esquire magazine. It’s located in the hip 21c Museum Hotel. We lingered after lunch to peruse the hotel’s art exhibition. The 21C Museum Hotel group collects and exhibits 21st-century art. The free exhibits change at each of its hotels and are open to the public. 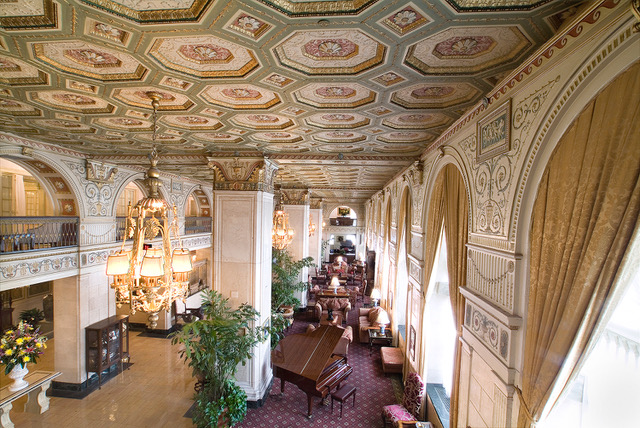 The Lobby Bar of the Brown Hotel is a stop on Louisville’s Urban Bourbon Trail.

Another hotel well worth visiting is the Lobby Bar in the Brown Hotel. Opened in 1923, the Historic Hotels of America property created a Louisville signature dish—the Hot Brown—a hot turkey sandwich.

Much more casual eats can be enjoyed at the Garage Bar, with wood-fired pizza and a beer garden. Housed in a former auto repair shop, there are Ping Pong tables on top of crushed cars.

The Troll Pub Under the Bridge, located on Whiskey Row, serves gastropub fare and stocks some 80 brands of bourbon. 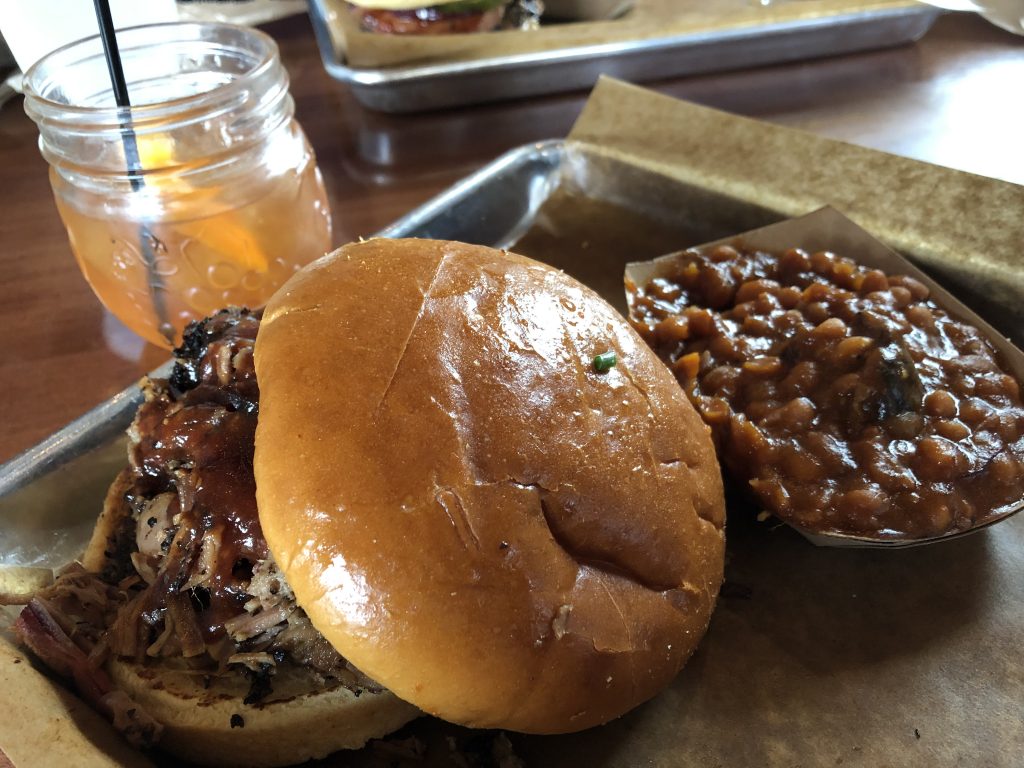 Barbecue sandwich at Feast BBQ accompanied by an Old Fashioned served in a mason jar.

We spent an entire day strolling downtown’s East Market District, also known as NuLu (New Louisville). Whatever they call it, the shops and food are fun. The most bizarre shopping experience is Joe Ley Antiques. This three-story, historic schoolhouse is packed with weird, wacky, and wonderful treasures. Whether you are a collector or just curious, it’s a must-see. Stylish home accessories and decor can be found at Scout. The work of local artists is the focus of Revelry Gallery, where you can pick up a painting or a pair of earrings.

No visit to Louisville would be complete without feasting on barbecue and Feast BBQ is sublime. At nearly 100 years old, Muth’s Candies is a Louisville tradition. In the spirit of respecting tradition, we sampled chocolates, caramels, and bourbon balls.

For another sugar fix, stop by Please & Thank You, which deservedly brags it bakes the best chocolate chip cookie in the world. 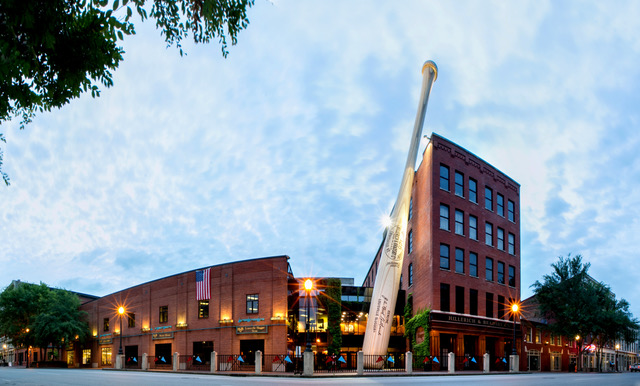 Louisville Slugger Museum & Factory is one of six attractions on The Main Ticket.

5. Six Louisville attractions for less than $10 each

You can visit six of Louisville’s most popular attractions for 50-percent off regular admission prices with The Main Ticket. It’s available for $45.99 and valid for a year from the purchase date. The attractions, located within five blocks of one another, include the Frazier History Museum, Louisville Slugger Museum & Factory, Kentucky Science Center, Evan Williams Bourbon Experience, Muhammad Ali Center, and Peerless Distilling Co. 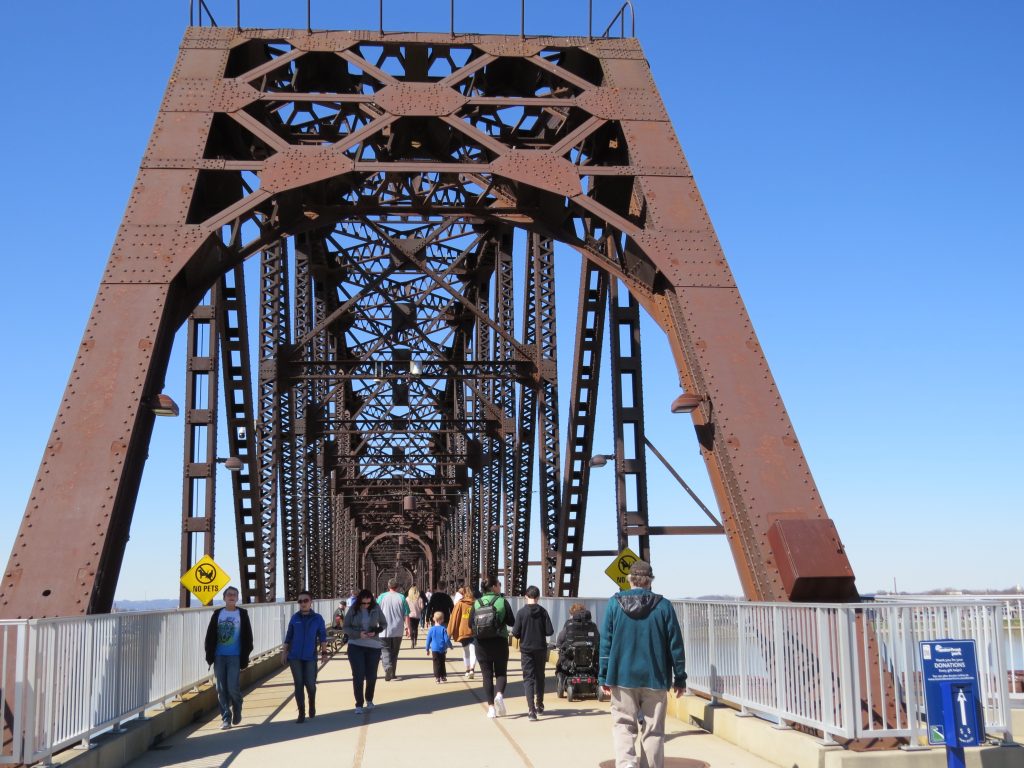 When you visit Indiana, walk across the Big Four Bridge. The former railroad bridge spanning the Ohio River links Louisville Waterfront Park to Jeffersonville, Indiana. It’s now a wheelchair-accessible bicycle and pedestrian bridge. Each ramp is one-half-mile long and the bridge is a mile long. Opened to the public in 2013, the attraction draws 1.5 million visitors annually. 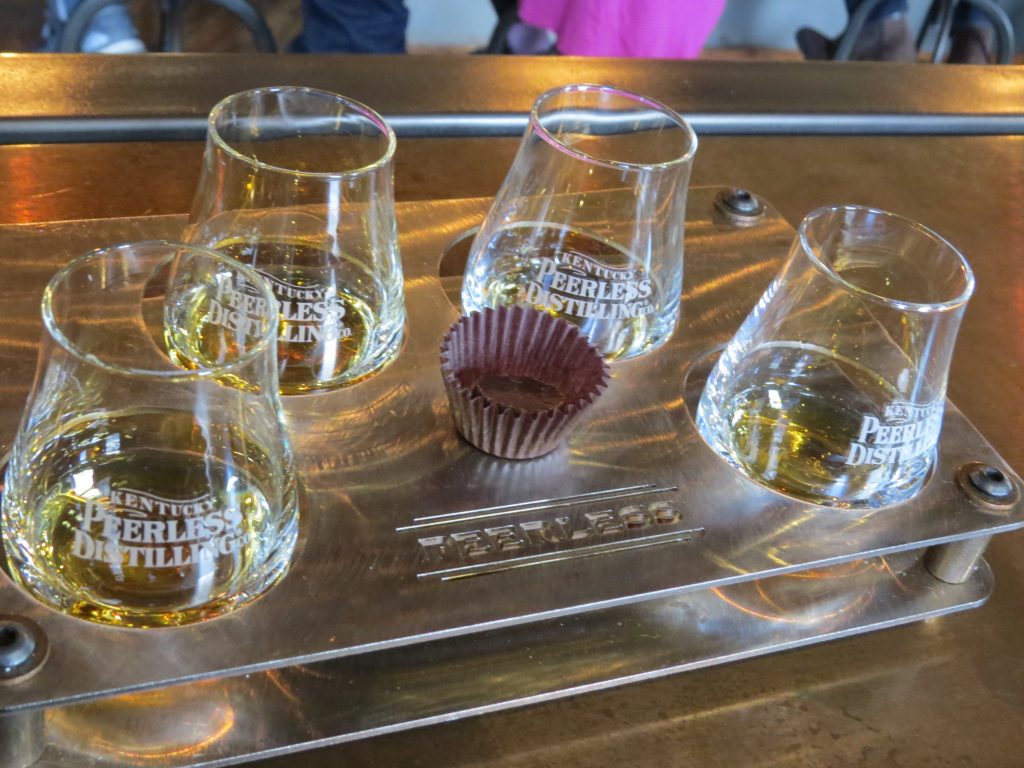 When you visit Louisville, savor a flight of bourbon and a bourbon-infused chocolate at Peerless Distillery in Louisville.

Disclosure: Portions of the authors’ visit were hosted by Louisville Tourism and the Omni Louisville. All of the opinions expressed are their own. 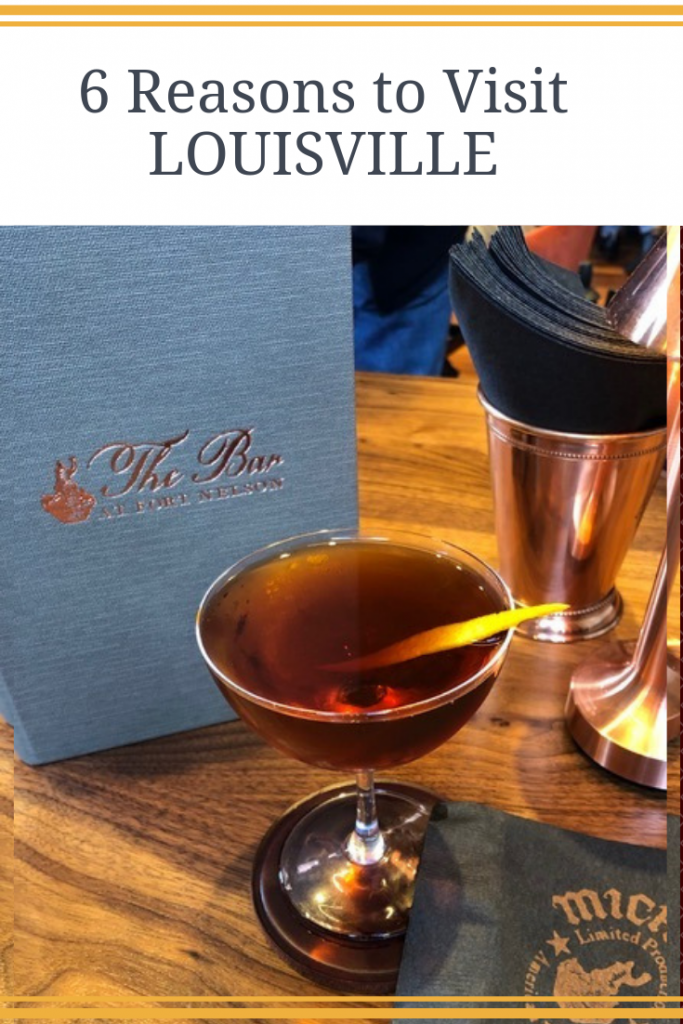