Kicking Back in Cozumel: What To See and Do

I thought 10 days in Cozumel would be enough. After all, the Mexican island measures only 30 miles long and 10 miles wide. That would provide plenty of time, I figured, to relax on its famous beaches, swim and snorkel in its crystal-clear waters, enjoy fresh seafood in the seaside village of San Miguel, and explore the Caribbean isle by rental car.

Turns out, I could have easily stayed another couple of days.

Heck, maybe even another week. Despite my almost maniacal desire to see everything everywhere I go, I sadly had to leave some stones unturned. 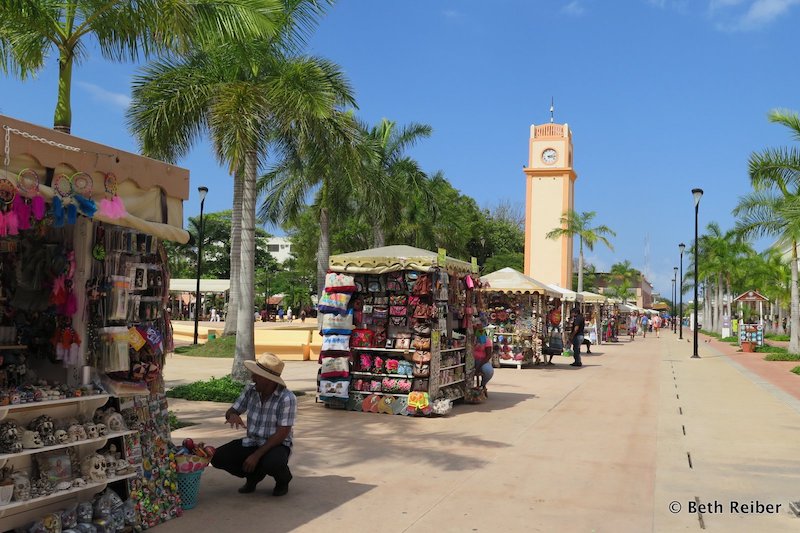 The author and two friends, making memories in Cozumel

Of course, it wasn’t entirely my fault. I was with two women I’ve known since we were in college, more than four decades ago, when we all spent a year abroad in Germany. And because we don’t live in the same town or even on the same continent (and can’t remember how long it’s been since our last reunion), Cozumel was our chance to catch up, sit around our rental apartment’s pool, cheer each other on to buy colorful clothing we’ll never wear back home, and stay up way too late. Our sightseeing itinerary, therefore, was tempered with plenty of downtime, which I suspect mirrors that of many vacationing visitors.

Probably the greatest thing about Cozumel is that despite being one of the world’s busiest cruise ports, with more than two million passengers disembarking here each year, most of the island remains undeveloped and uninhabited, making it a true tropical paradise within easy reach.

San Miguel, the island’s largest town, is home to most of the island’s 80,000 residents, an international airport, docks for cruise ships (we counted as many as five ships at dock each day), and ferries that travel between Cozumel and Playa del Carmen on the Yucatan coast in 35 minutes. Its lively waterfront buzzes with cruise passengers, day-trippers from the mainland, and vacationers staying in hotels and resorts that spread north and south of San Miguel on the island’s west side — or, like us, in rental homes and apartments in town. 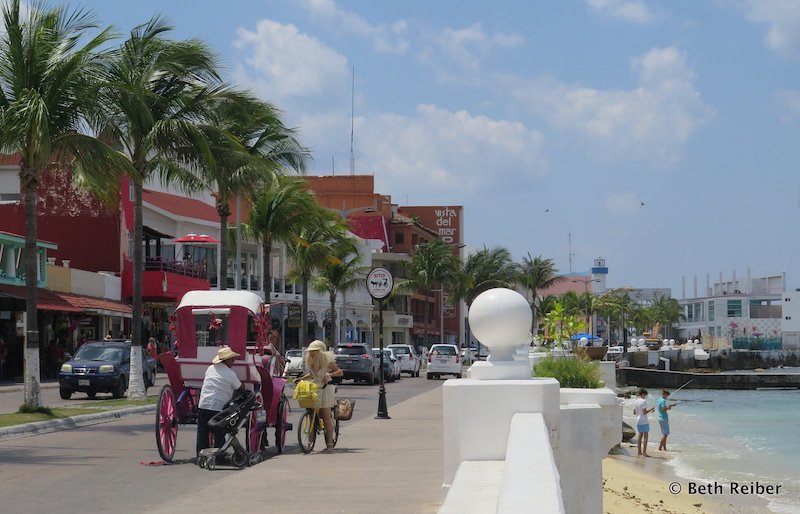 Sidewalk bars and restaurants, high-end shops, souvenir stalls, and other businesses line the waterfront, main plaza and pedestrian side streets, but just a few blocks inland is the sprawling residential area—with colorful one- and two-story homes and spreading bougainvillea. These neighborhoods are alive with motorcycles carrying as many as two adults and two children, kites often dancing in the skies, and the constant chorus of barking dogs.

Sundays, when no cruise ships come to port, locals head to the beaches during the day and gather on the main plaza at night for stage performances of dance and theater. Tables set up by various fundraising groups sell pizza, pasta and desserts to families pushing strollers, people walking dogs, children roller skating, and teenagers hunched over cell phones. 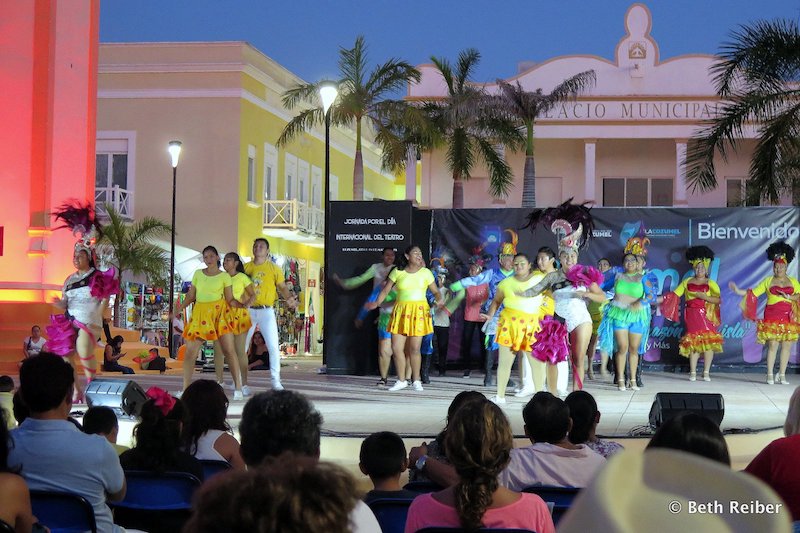 San Miguel’s Museo de la Isla Cozumel is the best place to learn about the island’s history, culture, flora, and fauna. If you don’t know much about coral–how they were formed and why they’re vital to the health of our planet–you’ll learn about it here. Cozumel’s famous reefs are part of the Mesoamerican Reef system, which stretches 600 miles along the coasts of Mexico, Belize, Guatemala, and Honduras, making it the longest barrier reef in the Western Hemisphere.

Other displays informed me that Cozumel has 400 plant species and 140 land vertebrates. Boas, crocodiles, peccaries, geckos, iguanas, wild boar, bats, hummingbirds, manatees, flamingos, raccoons, armadillos, and other animals have all made their way here. They live in the shelter of mangroves and the towering sapodilla trees and chit palms.

The museum also details the history of the island’s Maya, who arrived here some 2,000 years ago. Temples erected to honor Ixchel, the Maya goddess of the earth, moon, fertility and medicine, made Cozumel an important pilgrimage destination. Spaniards, however, destroyed the island’s temples and idols after their arrival in 1519, putting an end to Cozumel as a religious destination. By 1600, Cozumel was largely abandoned, making it the perfect hideout for pirates.

Only in the mid-1800s, after Yucatan Maya rose in resistance to free themselves from Spanish oppression, did a wave of Mestizo (mixed European-Amerindian heritage) fishermen and woodcutters seek refuge here and repopulate the island. Although Cozumel exported sisal, copra (coconut meat from which oil is extracted), and chicle (used for Wrigley’s chewing gum), it mostly languished until 1961, when Jacques Cousteau declared the island one of the most spectacular dive sites in the world.

Most people come to Cozumel because of its white sandy beaches and clear waters with up to 150 feet of visibility.

Companies catering to scuba divers of every level offer trips to more than 25 dive sites around the island. For snorkelers, sunbathers, and swimmers, there are lots of options on the island’s west side. Waterfront resorts offer day passes to beach clubs like Playa Mia, which has a swimming pool, waterslides, a water park for the kiddos, ocean kayaks, paddleboats, Hobie Cat sailboats, beach volleyball, and more.

For less fancy (and cheaper) digs, SkyReef is an open-air bar and grill that offers free use of beach chairs, plus rental snorkel gear, tequila tastings, and massage. Because there are reefs close to shore, often you only need to jump into the water and start looking around. Accessible only by tour boat are El Cielo, with its resident starfish, and Palancar, considered among the best snorkeling spots.

In contrast to the developed west side of Cozumel, the untamed “other side” offers miles and miles of pristine coastline that ranges from white-powder beaches to rocky shoreline, easily accessed via a two-lane paved road that hugs the east coast. Although the surf is rough and swimming is limited, local families descend on Sundays with their own food and umbrellas for a day in the sun, particularly at San Martin Beach where there are lifeguards. 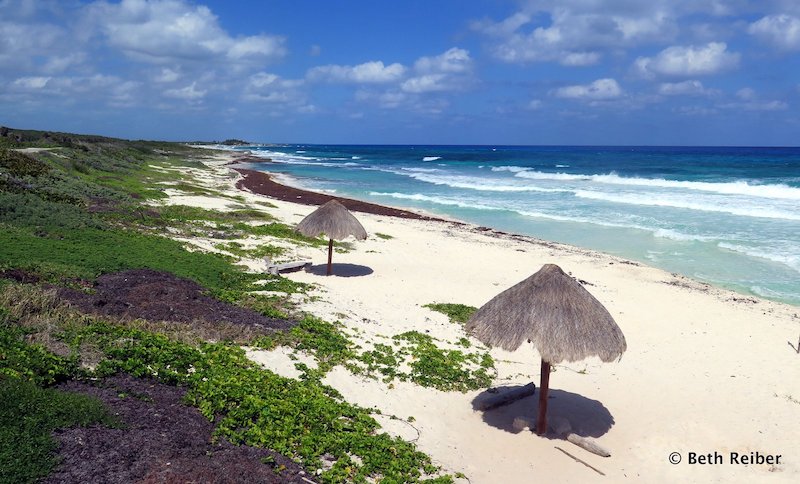 The east coast of Cozumel

At the southern tip of the island is Punta Sur Eco Beach Park, a protected peninsula with probably Cozumel’s prettiest beach, a restaurant, snack bar, rental snorkeling equipment, and boat rides in a lagoon where you might see crocodiles.

My favorite part of our afternoon here was walking along a long stretch of isolated beach and sitting alone in the sand, mesmerized by the incessant crashing surf. 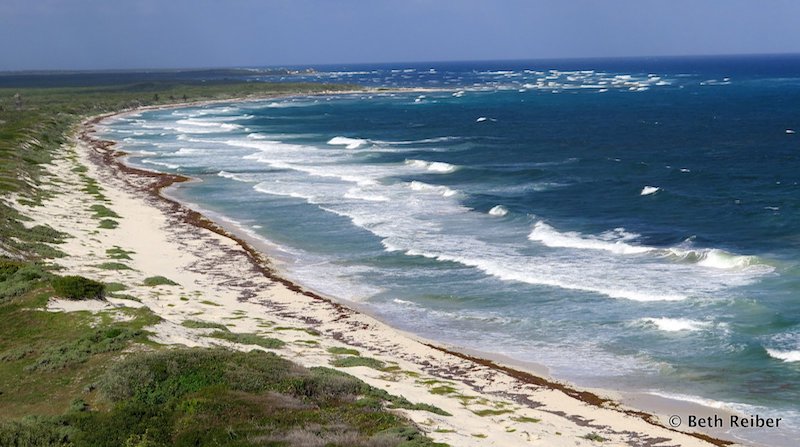 If you don’t dive or snorkel–or even if you do–there’s the Atlantis. Diving more than 100 feet below the surface, the submarine offered us the rare chance to experience an underwater world usually visible only to divers, including coral reefs, a 2,000-foot drop-off wall and a 1943 minesweeper, sunk on purpose in 2000. 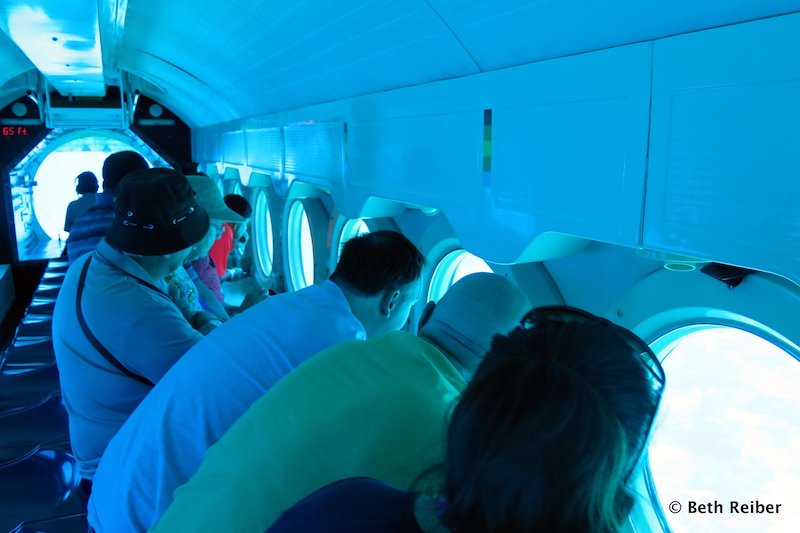 View of sunken ship from the Atlantis

For a hands-on experience in ancient Maya culture and lifestyle, we visited Pueblo del Maiz, a reconstructed pre-Hispanic village nestled among woods in the middle of the island. After painting our faces, our guides led us to various “stations” in the village. We saw chocolate being made and then tasted how good it is with only honey as a sweetener. We learned that honey produced by Mexican bees has been used to treat cataracts, skin scars, and high cholesterol.

We made tortillas the traditional way, grinding the corn and then cooking the dough over a fire. We chewed chicle, a resin from sapodilla trees that is cooked six hours and is considered a natural way to clean teeth. We presented offerings to Ixchel, tested our skills with a Maya ball game, and watched ceremonial dances.

This is an especially great outing to share with grandkids, or, like us, with friends who are kids at heart. 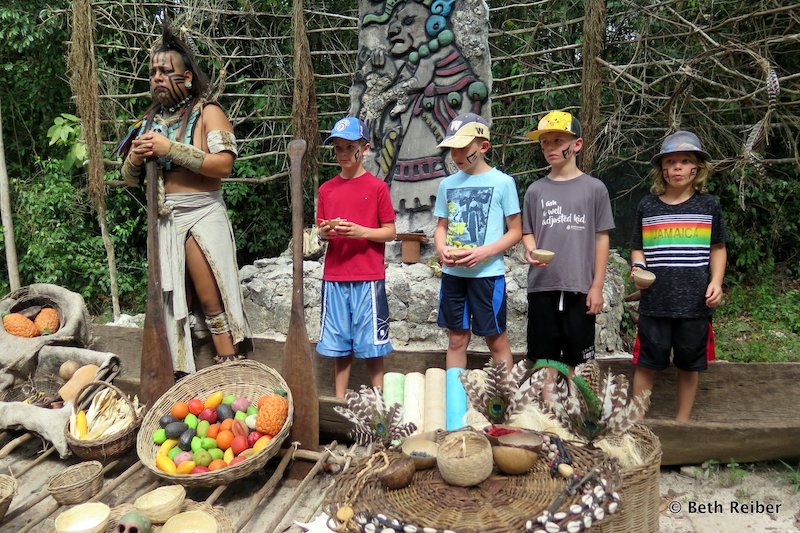 We then visited the nearby San Gervasio Archaeological Site, the largest of several Maya ruins on the island, reached by walking through forests. Most of the stone structures date from 1,000 to 1500 A.D., including plazas, elite residences, tombs, the main plaza and altars. 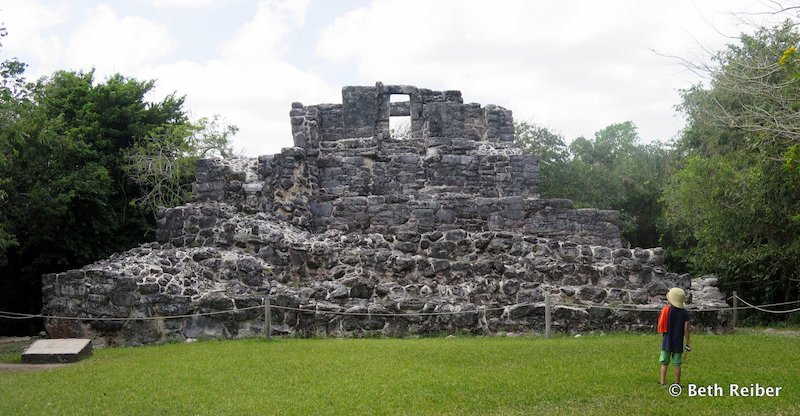 Because my friends had had enough walking around by then, I continued on my own to Ka’na Nah, a temple devoted to Ixchel that stands in a small clearing. The pyramidal ruin leaves much to the imagination, but as I stood there, everything around me came vividly into focus. My senses were acutely aware of the deep blue sky punctuated by white clouds, the wind rustling through trees, birds chirping, butterflies lilting in the air, a hawk soaring majestically overhead. And my one thought was: Ixchel. Maybe I was feeling the power of Ixchel. 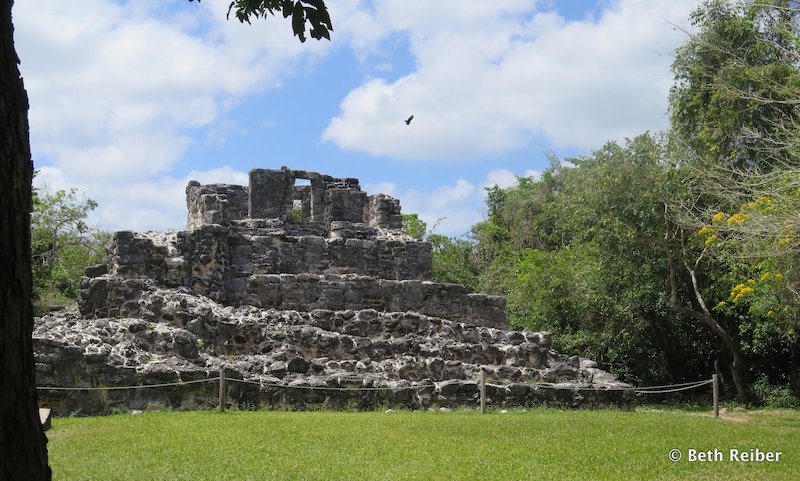 • Because of a February 2018 explosion on a ferry running between Playa del Carmen and Cozumel that injured two dozen people, security has been beefed up with police and bomb-sniffing dogs. You can avoid the ferry altogether by flying directly to Cozumel.

• Don’t drink tap water or use it to brush your teeth unless your resort filters its own water. Buy bottled water instead.
• Don’t lose your immigration card you receive when entering Mexico because you will need it when leaving the country. If you do lose it (as happened to one of my girlfriends on this trip), you will have to buy a new one at the airport in pesos.

Disclosure: The author paid for her flight and accommodations but was hosted by two Cozumel attractions: Atlantis Submarines and Pueblo del Maiz.