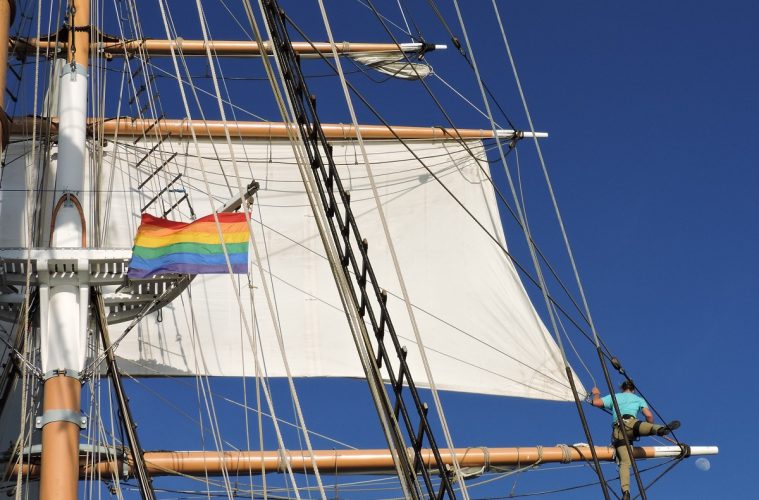 Whether you live near San Francisco Bay or are just visiting, why not experience the picturesque northern California landscape from a new perspective? You can ogle the scenery while gliding over the water. Or enjoy it from the waterfront of history-packed Angel Island.

Sail away on the San Francisco Bay 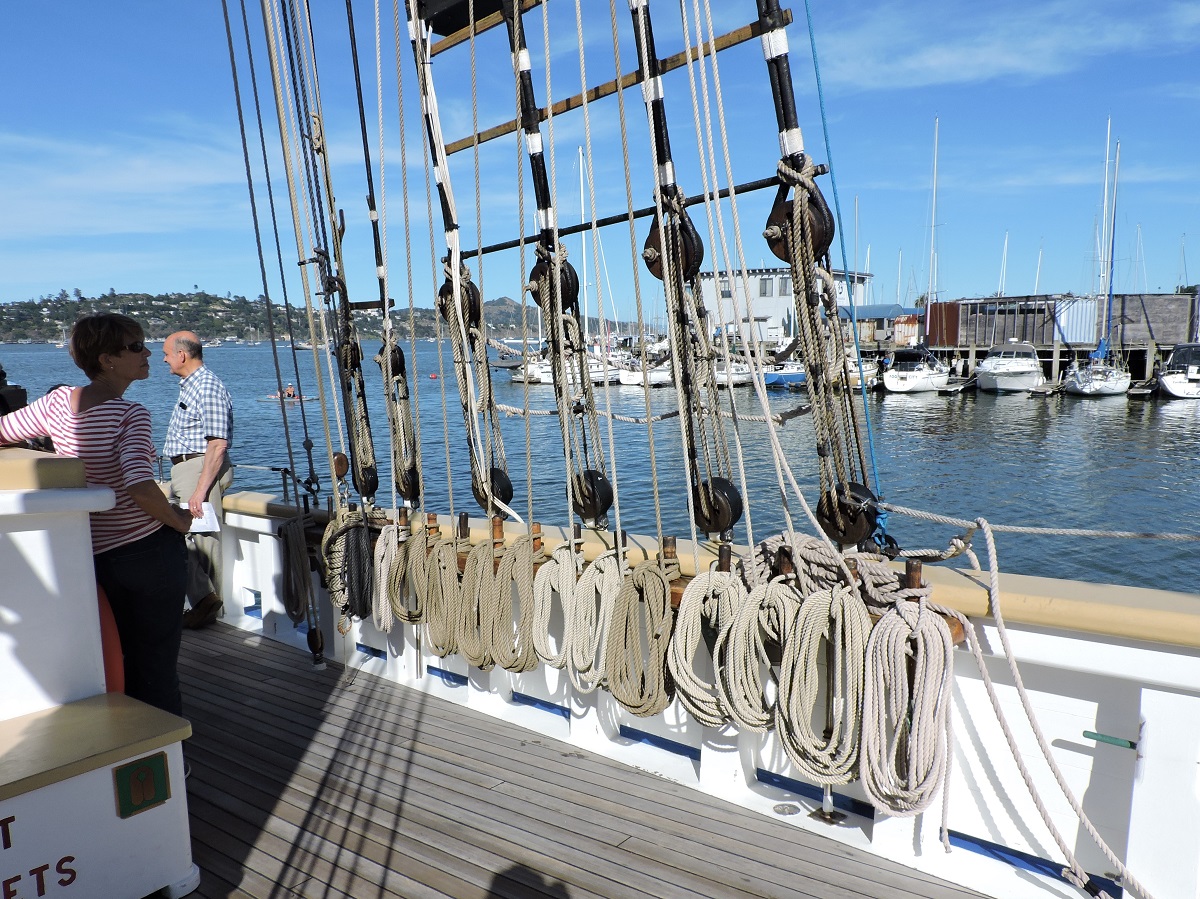 On a clear, calm weekend evening in June on the hottest day of the year, the chance to sail the waters of San Francisco Bay and be refreshed by its frequently chilly winds sounded particularly appealing.

I chose the 50-passenger Mathew Turner, one of a handful of tall ships currently plying the West Coast. With its square-rigged foremast, the 132-foot-long brigantine is a beauty. Based on the 1891 Galilee and named after that ship’s builder, the Mathew Turner was constructed locally in Sausalito, mainly from northern California Douglas fir. It launched in 2017.

“All the rigging is absolutely the way it was,” noted Alan Olson, the man responsible for making it happen. “We need to be the greenest tall ship ever built,” he added, obviously proud to show off his seven-year, $6 million accomplishment. 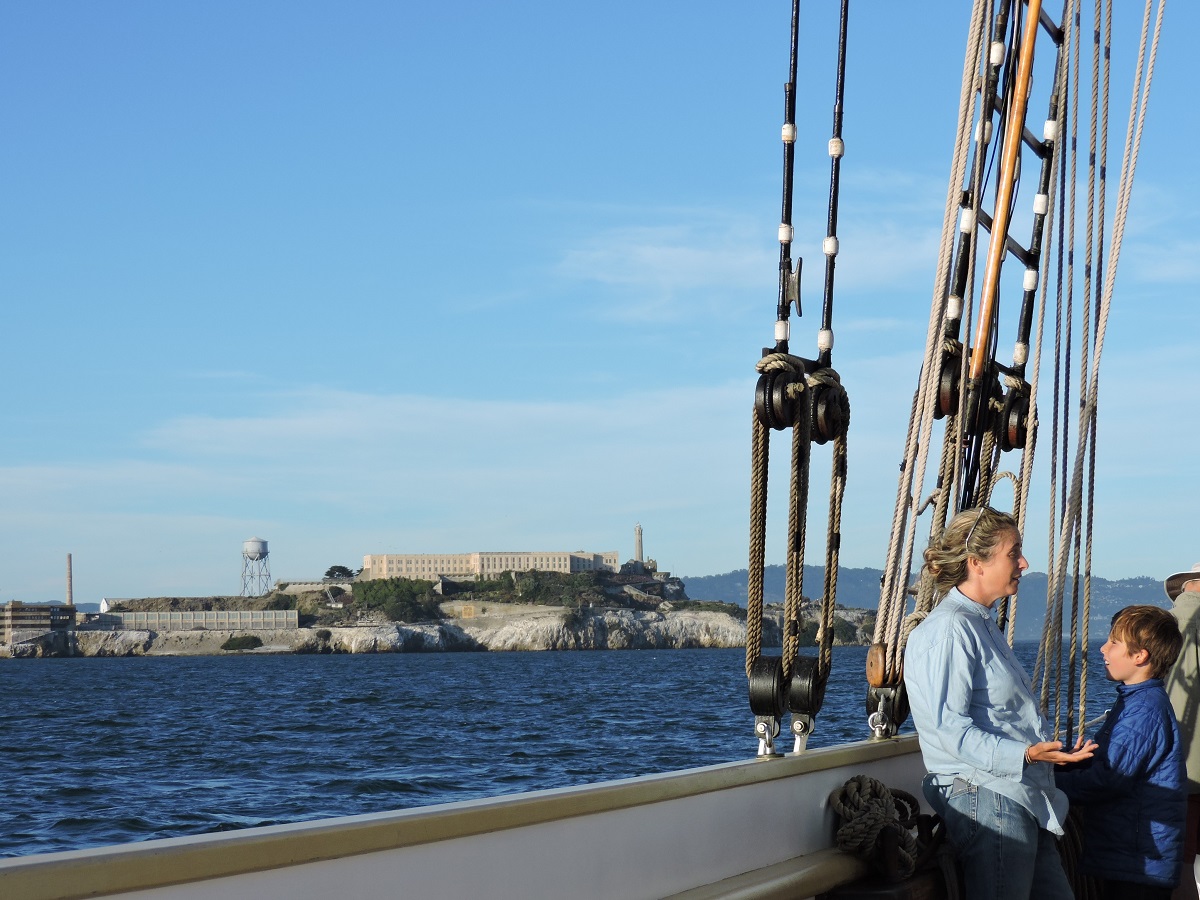 Sailing past Alcatraz aboard the Matthew Turner

Our pre-sail instructions advised dressing in layers. So I dutifully stuffed a fleece into my backpack in case my windbreaker wasn’t enough. Though I never came close to needing an extra layer, I was glad I packed another form of fortification—munchies and wine. Both paired perfectly with watching the almost-full moon rise above the rigging while I chatted with a group of friends.

During the 2-1/2-hour sail operated by the educational non-profit Call of the Sea, would-be sailors, young and old, may take a turn steering the ship’s polished wood wheel. You can watch the crew of 12 climb the rigging to handle the sails. Or simply take in the scenery while sailing along the San Francisco waterfront.

We passed close to Alcatraz and along the shores of Angel Island. The views and photo ops are stunning no matter where you look, the Golden Gate Bridge included. 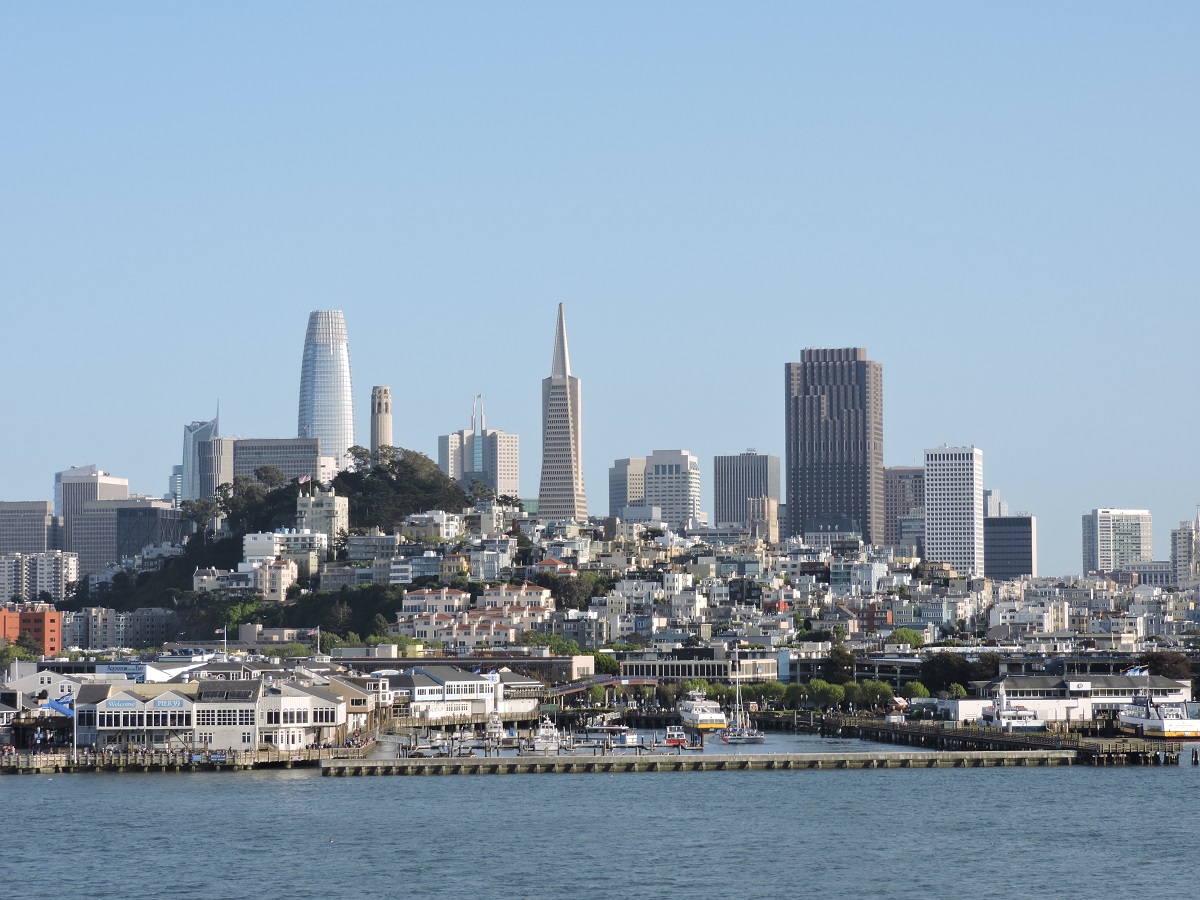 Returning to the dock in Sausalito at 8:30 p.m., my group was still too early to see the sun sink below the horizon. However, I’m hopeful cool breezes, the thrill of seeing more sails unfurled and a glorious sunset will reward my next adventure aboard the Matthew Turner. 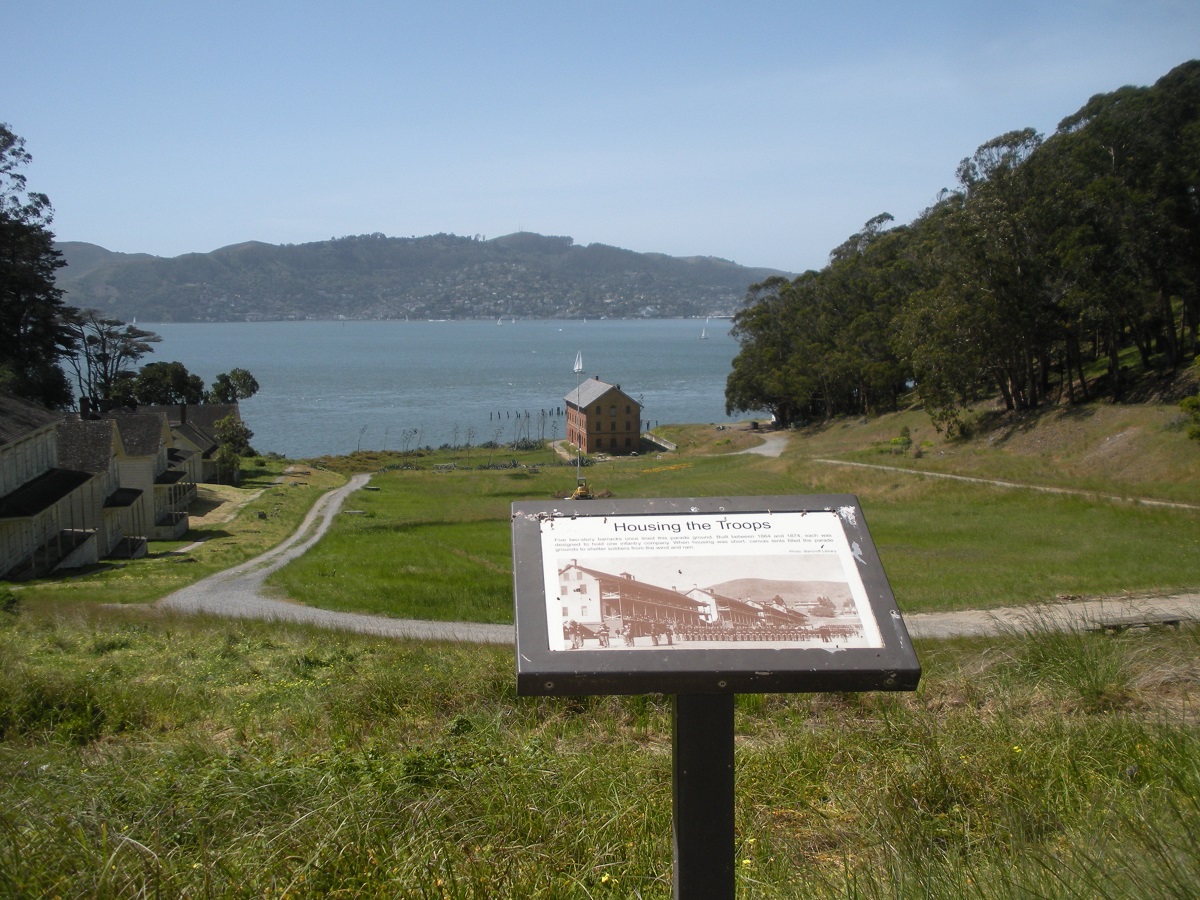 For a different view of San Francisco’s history, ferry to Angel Island where historical sites include this 1800’s troop barracks

For those who think of themselves as land lovers rather than sailors, a day spent on Angel Island offers a chance to kick back over a picnic lunch. It’s also an opportunity to discover the area’s fascinating history.

To reach the island, hop on one of the public ferries departing from San Francisco or from across the Golden Gate Bridge in Tiburon. Private boats can dock for the day or moor overnight in picturesque Ayala Cove.

Angel Island State Park, occupying the largest natural island in San Francisco Bay, has an intriguing tale. The one-time Coast Miwok tribal hunting ground turned Civil War fortification became a quarantine site and immigration station in the early 1900s. Between 1910 and 1940, approximately 500,000 immigrants crossed the Pacific Ocean (many from China) and were processed and detained here.

During World Wars I and II, Japanese immigrants sent from Hawaii, followed by prisoners of war, were processed through Angel Island. And this island was also the jumping-off point for Army troops headed to and returning from conflict. As a result of this history, the island became a state park, beginning with Ayala Cove in 1954. 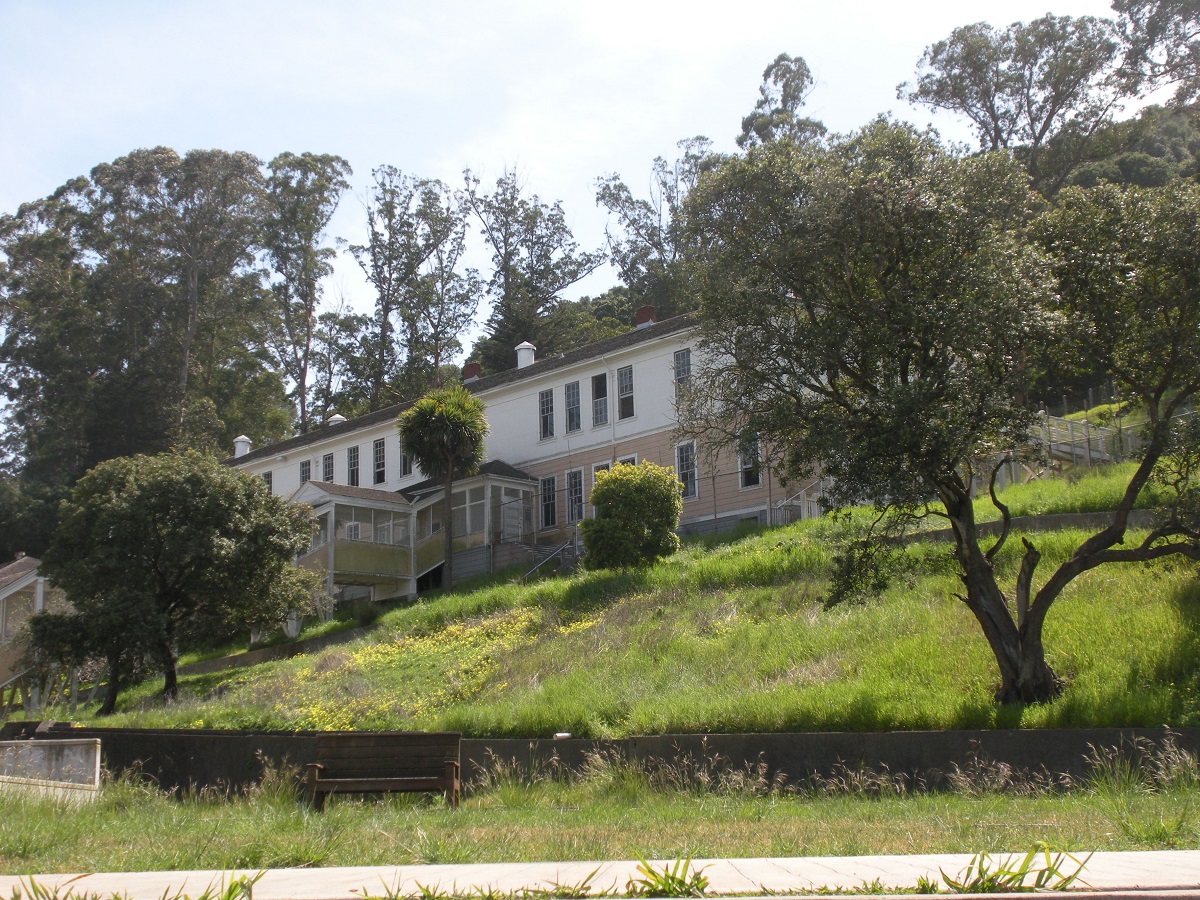 Whether hiking, pedaling a bicycle, or riding in a motorized tram around Angel island, be sure to visit the historic buildings open to the public. For example, in the restored Immigration Station Museum (the former mess hall and barracks), you can still see heartfelt poems carved into the walls by Asian detainees. Translations and audio versions are available for visitors. On a lighter note, check out the Civil War Bakehouse at Camp Reynolds.

Fascinating tidbits and stops to take in the fabulous views overlooking the bay punctuated my informative tram tour. My favorite story centered on the island’s most recently arrived residents—coyotes. I learned that coyotes can swim several miles. And they handily make it across Raccoon Straight from the Marin mainland. About five years ago, the first coyote completed the swim, followed several years later by a second. I was skeptical until I witnessed a lone coyote trotting along the waterfront near China Cove and the museum.

Like the coyote, I felt the urge to search for lunch. Luckily, the Angel Island Café was open, as was a seat with a view from the open-air deck. 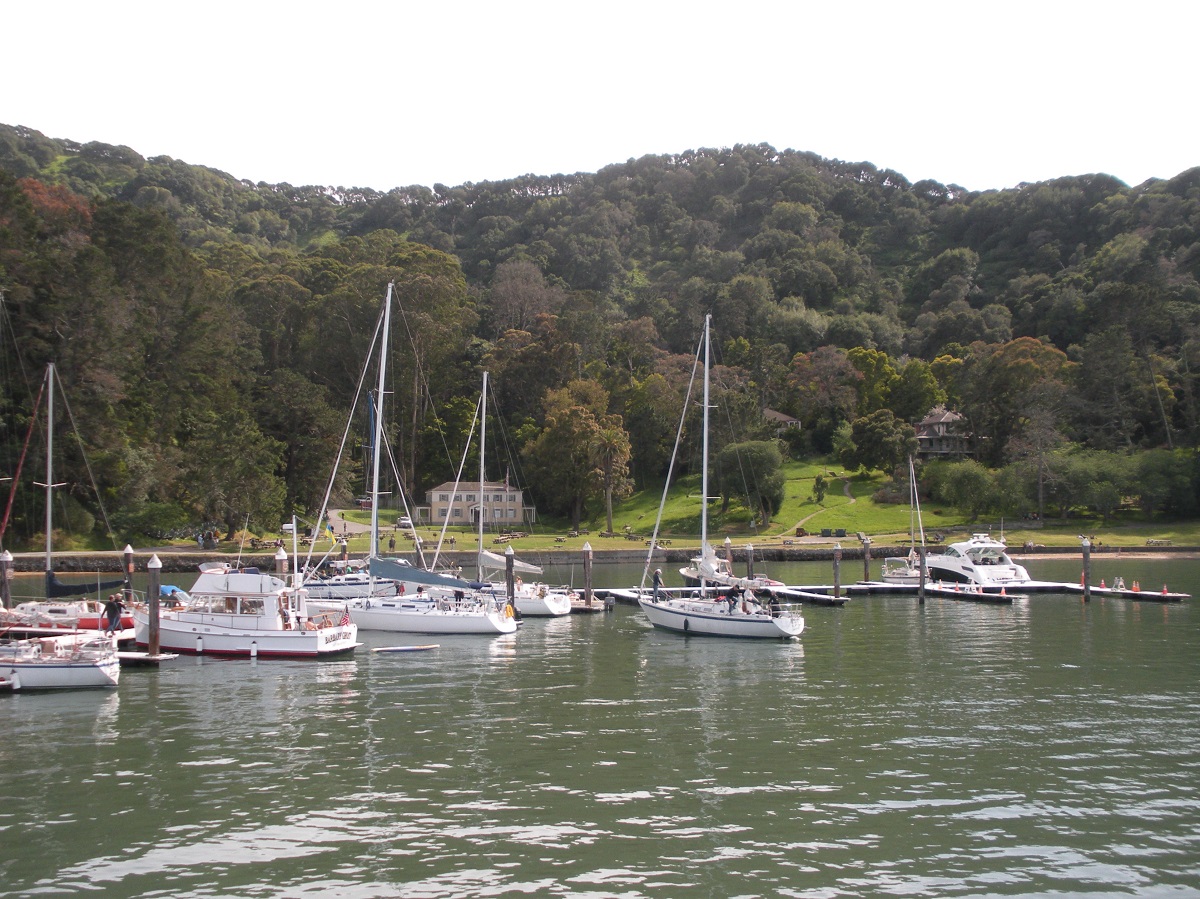 A Boomer Tour of the San Francisco Classics 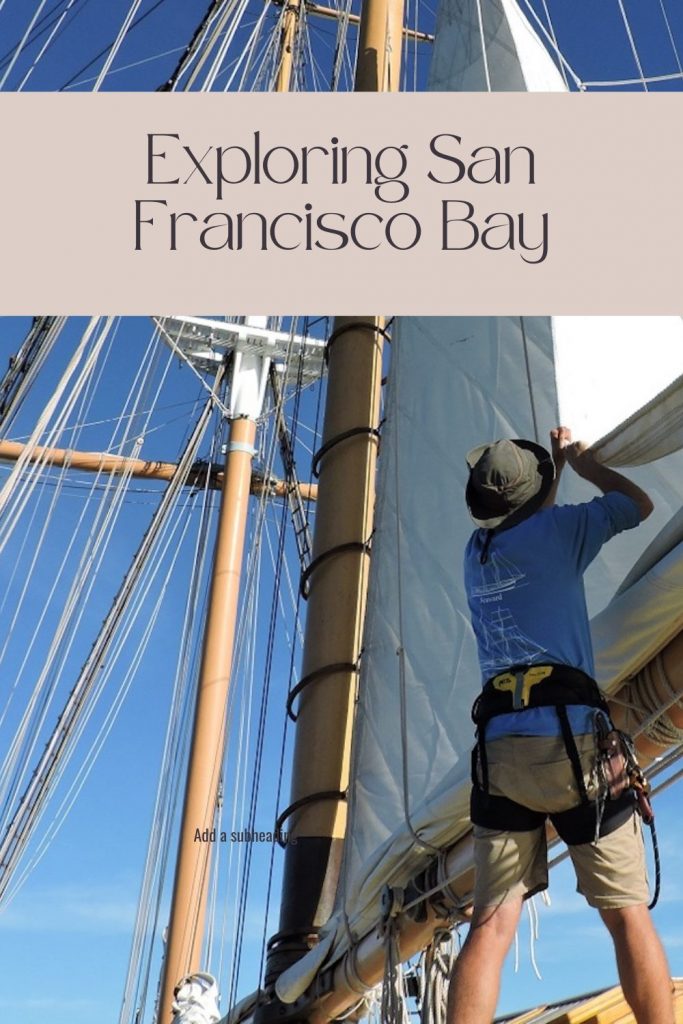