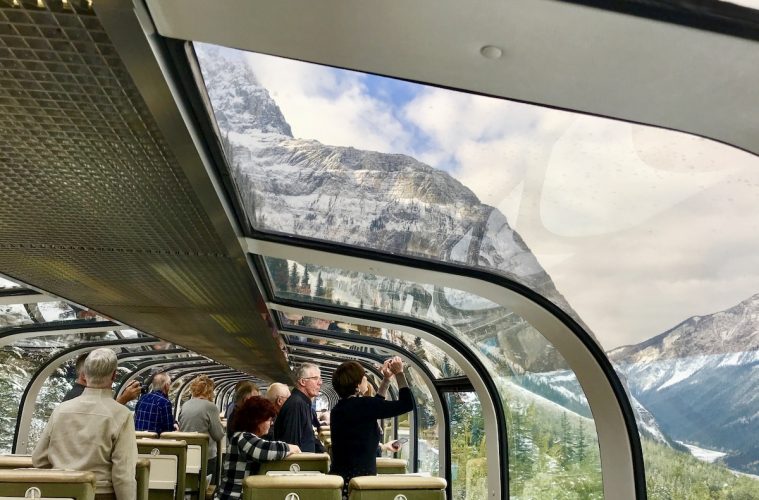 A freak early October snowstorm has ravaged Alberta the day I step across a bright red carpet and climb aboard a luxury train in Banff to journey through the Rocky Mountains.

The storm dumps enough to snarl highway traffic, delaying our departure by a few hours. In return, we get to marvel at a snow-kissed landscape full of snow-laden pine trees juxtaposed by shimmering turquoise rivers that know it’s only fall and so haven’t frozen.

“Even though we’ve been delayed, this is probably the most beautiful day you could get in the entire season,” enthuses our train manager, Danny, as the team runs through the safety rules and the plan for the day before sending us off in two seatings for a belated breakfast. 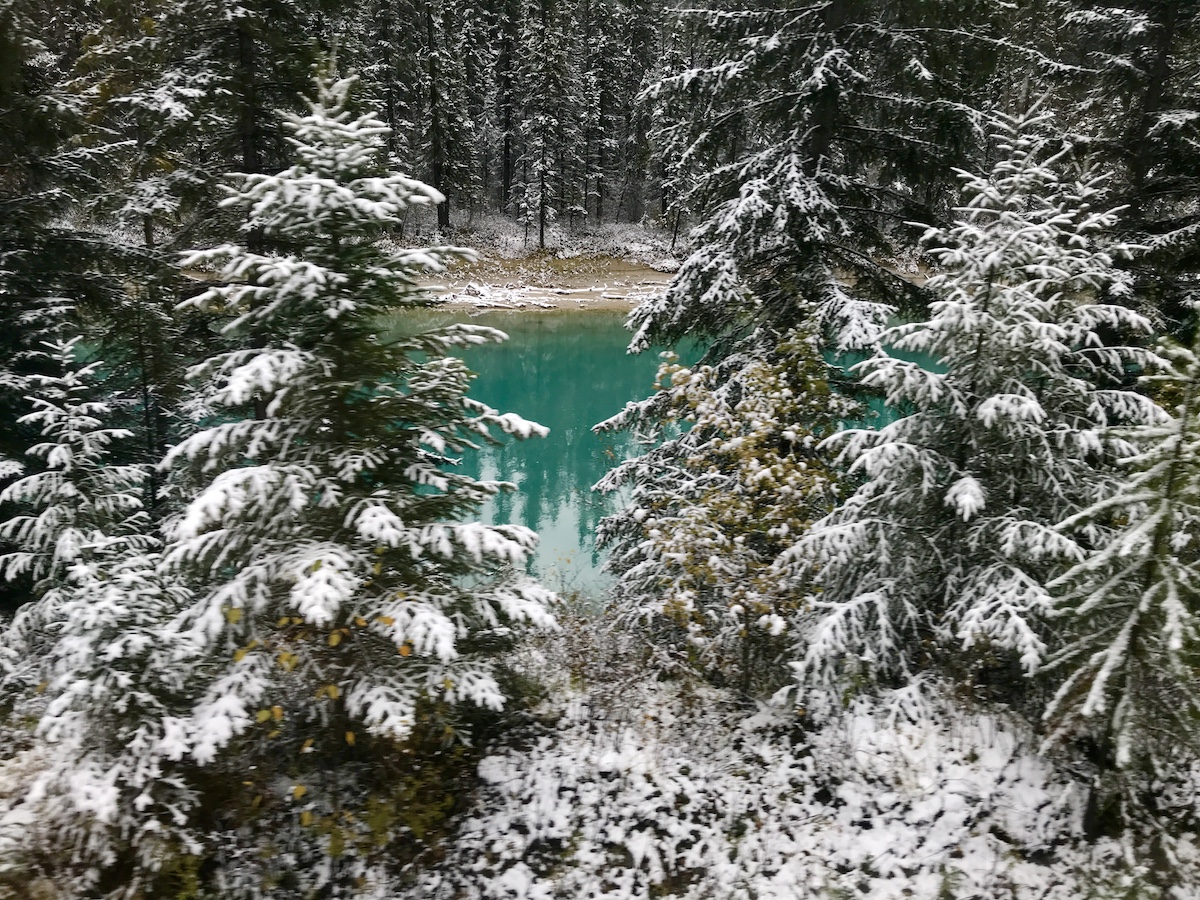 As I settle into a spacious seat in coach seven, I stop fretting about whether the views will be better on the left or right side of the train. The domed passenger car has oversized windows and panoramic views, and the train will be zig-zagging through the mountains in Alberta and British Columbia. Wildlife appears randomly on both sides, and this is the kind of train ride where people will jump up, mingle and share the view. 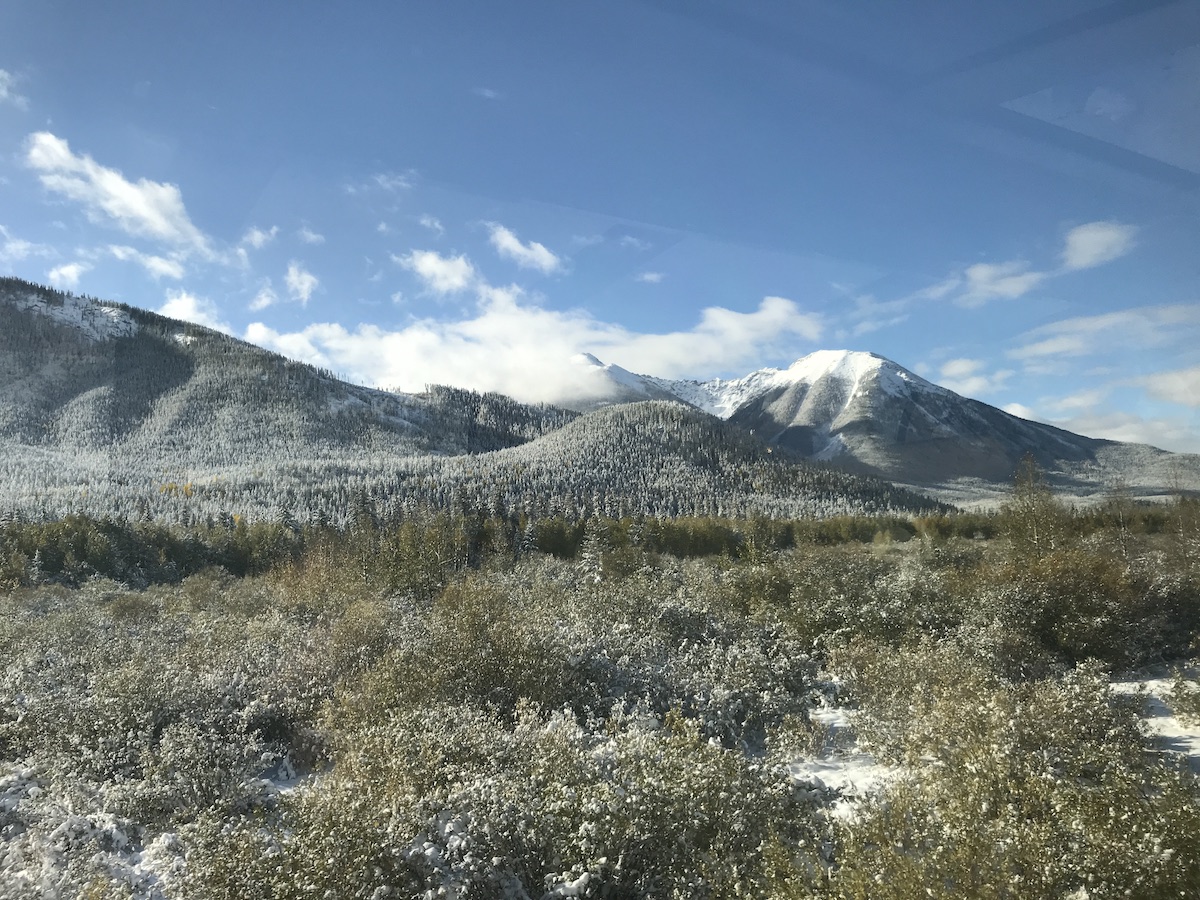 Technically, there are 625 guests on this two-day Rocky Mountaineer journey, but it doesn’t feel so big. We are spread out over 10 domed cars and so our world narrows to just our own coach. Mine holds 68 guests who hail  from Canada, the United States, Europe and Australia. Also aboard: one train manager, four hosts, one sous-chef that we share with another coach, two cooks and a dishwasher. We are westbound heading for Vancouver with a night in Kamloops, B.C. 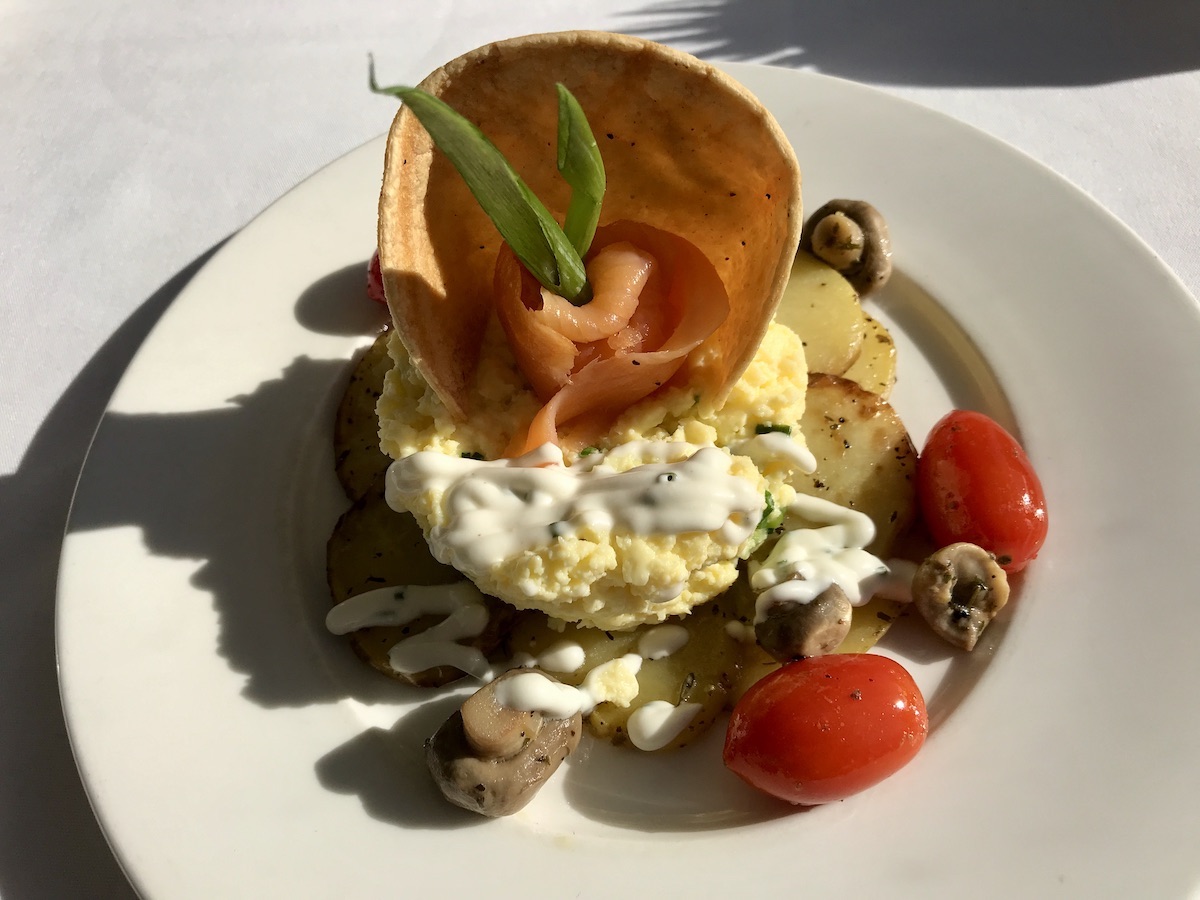 The Rocky Mountaineer is known as much for its locally inspired food as for its stunning scenery. My scrambled eggs come molded into a palm-sized round perched atop roasted Yukon Gold potatoes and button mushrooms, drizzled with crème fraîche and crowned with smoked salmon slices that have been twirled and artfully placed in front of a small, crispy corn tortilla.

And so begins the pampering of our minds and bodies. 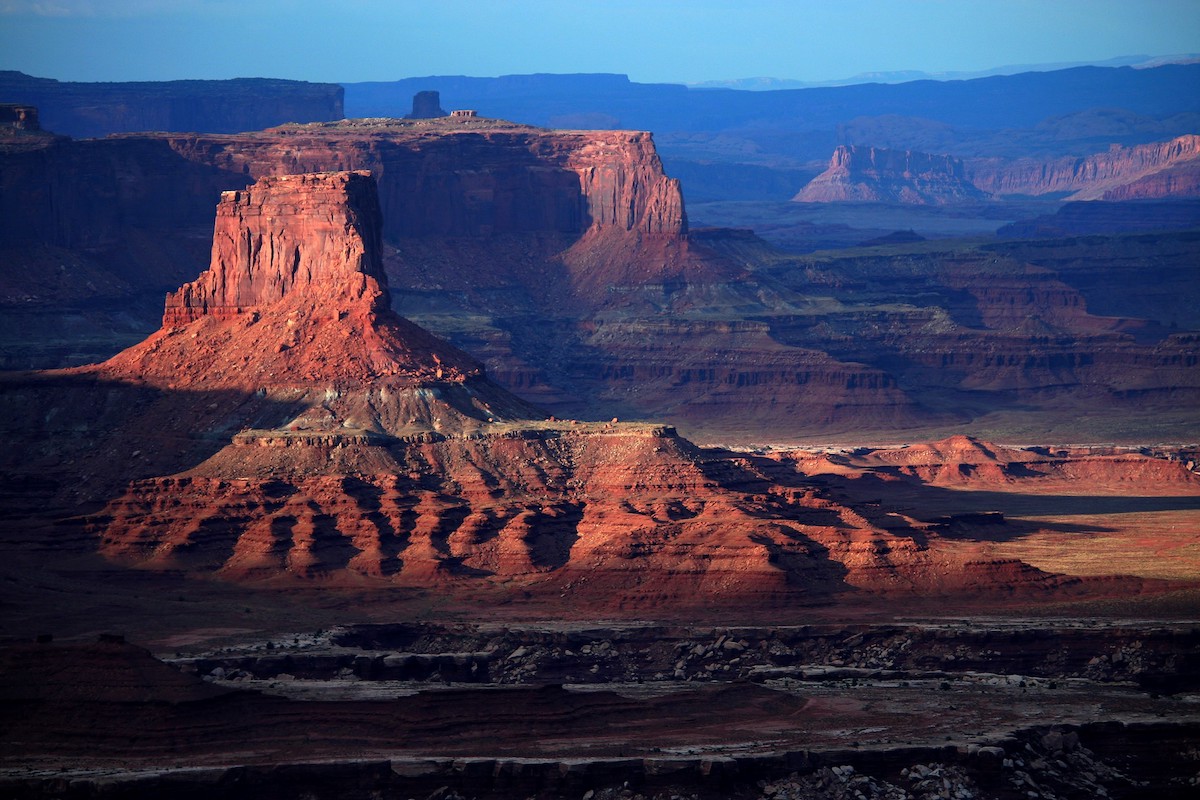 The Rocky Mountaineer is making news right now because the luxury train is expanding into the southwest United States in 2021. The new, two-day Rockies to the Red Rocks rail journey between Denver, Colorado, and Moab, Utah, features a night in Glenwood Springs, Colorado. The train will travel along the Colorado River and through canyons before showing off mountain vistas, desert cliffs, natural archways and hoodoos and crossing the Continental Divide.

“The work to find a new route has been underway for several years as we needed to find a special location with many of the same features we have in Western Canada,” president and CEO Steve Sammut explains in a statement: “Incredible scenery, iconic destinations, and the option for an all-daytime, multi-day journey that is best experienced by train.”

For us, that means gleeful shouts for elk, mountain goats, bald eagles and colourful Kokanee salmon that are swimming upstream through shallow rivers to spawn.

The Rocky Mountaineer has built a loyal following and tops untold bucket lists around the world. The Canadian government created a Canadian Rockies by Daylight experience and tasked VIA Rail, an independent Crown corporation, with launching it in 1988 and running the first two seasons. The Rocky Mountaineer took over in 1990 and now calls itself the world’s largest privately-owned luxury tourist train.

It currently runs three routes in Western Canada and carries more than 100,000 people each year. I’m experiencing the flagship route, First Passage to the West. I haven’t yet tried Journey Through the Clouds or Rainforest to Gold Rush. Both go to Jasper. A route connecting Seattle to Canada has been cancelled. 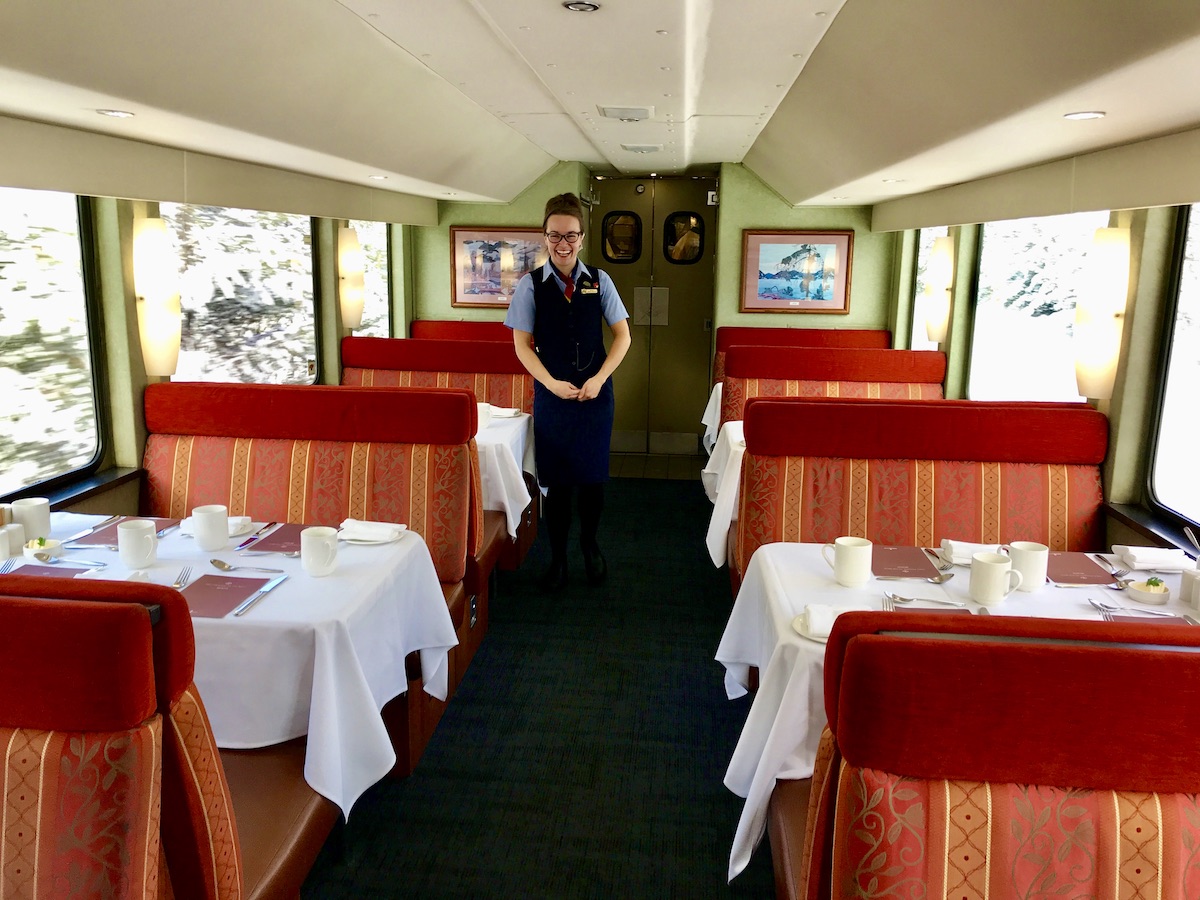 Whether traveling in Canada or the U.S., passengers should know three things. The season lasts only from April to October. The luxury tourist trains share the tracks with freight and passenger trains. And, they only travel by day, so nights are spent in hotels. (Transfers are flawless and the luggage travels by bus. It’s waiting for us in our rooms, where it’s picked up the next day.)

Service categories differ between the Canadian and U.S. offerings. Canadian routes have GoldLeaf or SilverLeaf Service. My trip is in GoldLeaf, and so I sit in the glass-domed passenger car but make my way to a downstairs dining room for decadent, made-to-order meals. 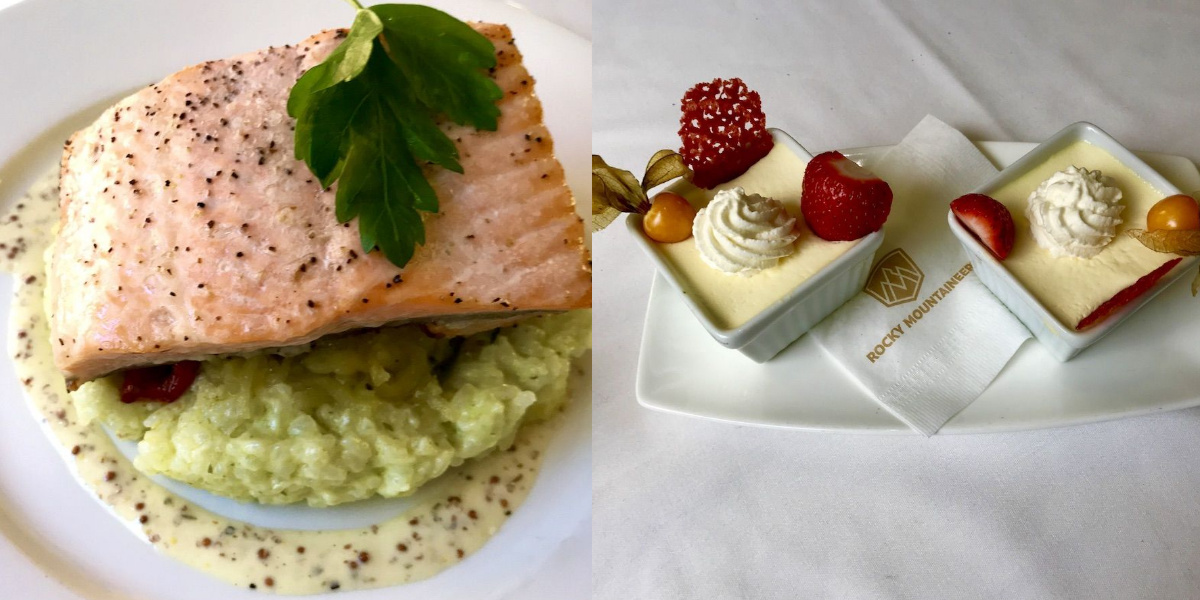 SilverLeaf coaches feature domes and oversized windows. But, since there’s only one level, meals are delivered to your reclining seat. The U.S. route promises SilverLeaf Plus service. Either way, this is a train company that has its own executive chef and a cookbook called Eat Play Love: Regionally Inspired Cuisine by Rocky Mountaineer. 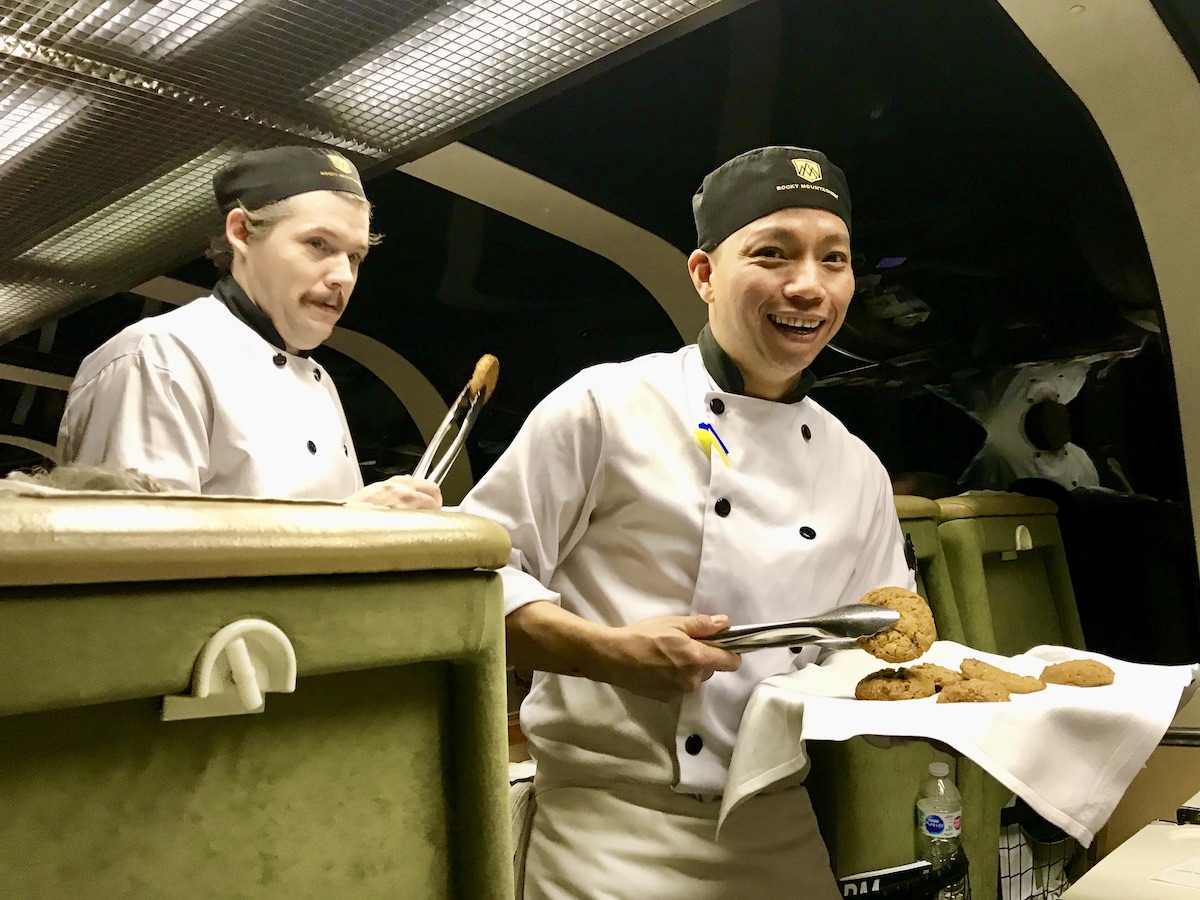 Another thing the Rocky Mountaineer excels at is storytelling — either in writing in the RM Magazine and Mile Post newspaper, or verbally by fun-loving hosts.  They “read the energy” and decide what mix of history, geography, fun facts, musical playlists, quizzes and quiet time to dish out in between the free drinks and sweet and savoury snacks.

Keeping an eye out for wildlife 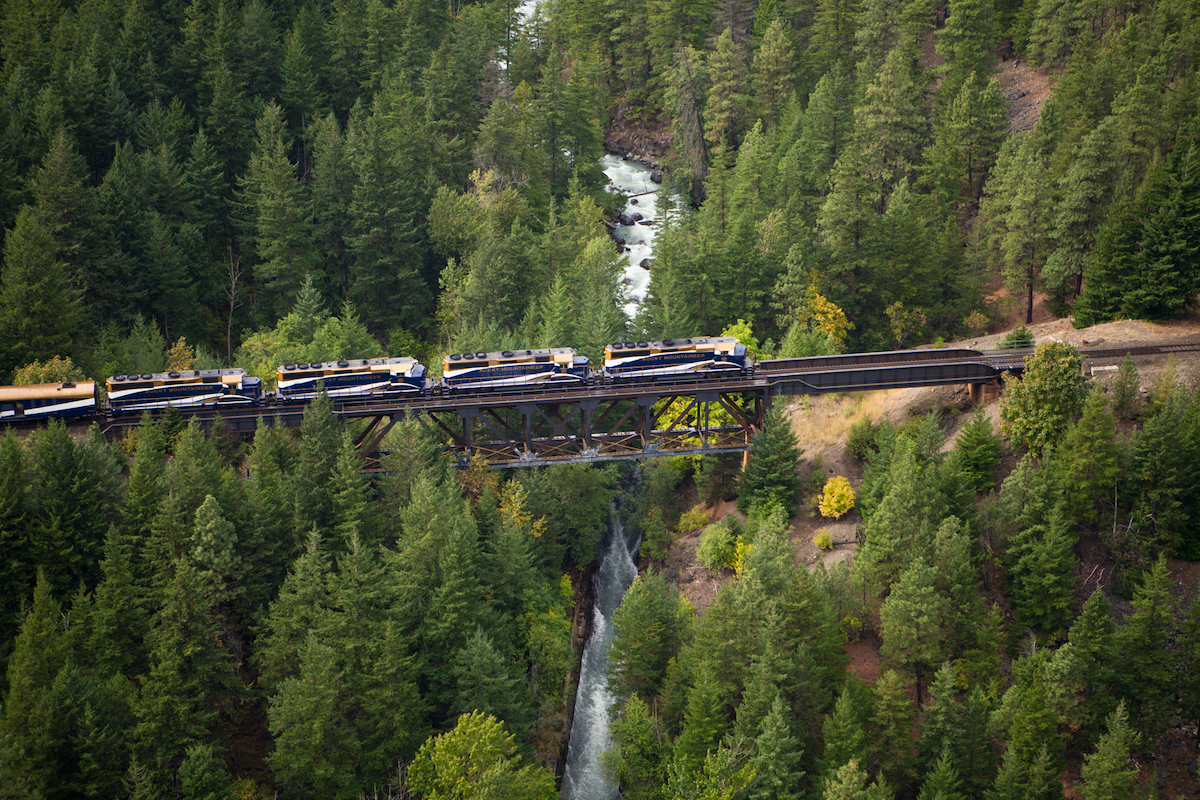 Be forewarned that aboard the Rocky Mountaineer, wildlife sightings don’t count unless they’re shared by at least two people. For us, that means gleeful shouts for elk, mountain goats, bald eagles and colourful Kokanee salmon that are swimming upstream through shallow rivers to spawn.

I’ll never forget the sound of delighted adults shouting “elk on the left, elk on the left — in the trees”; the sight of a small, semi-arid desert full of cacti and sagebrush; or the giddy feeling of trying to take a selfie on the small outdoor viewing platform as the train clattered down the track.

Nor will I forget the taste of cinnamon scones slathered with butter and strawberry jam and served to me in my temporary home in seat one of coach seven on such a brief but unforgettable rail journey. 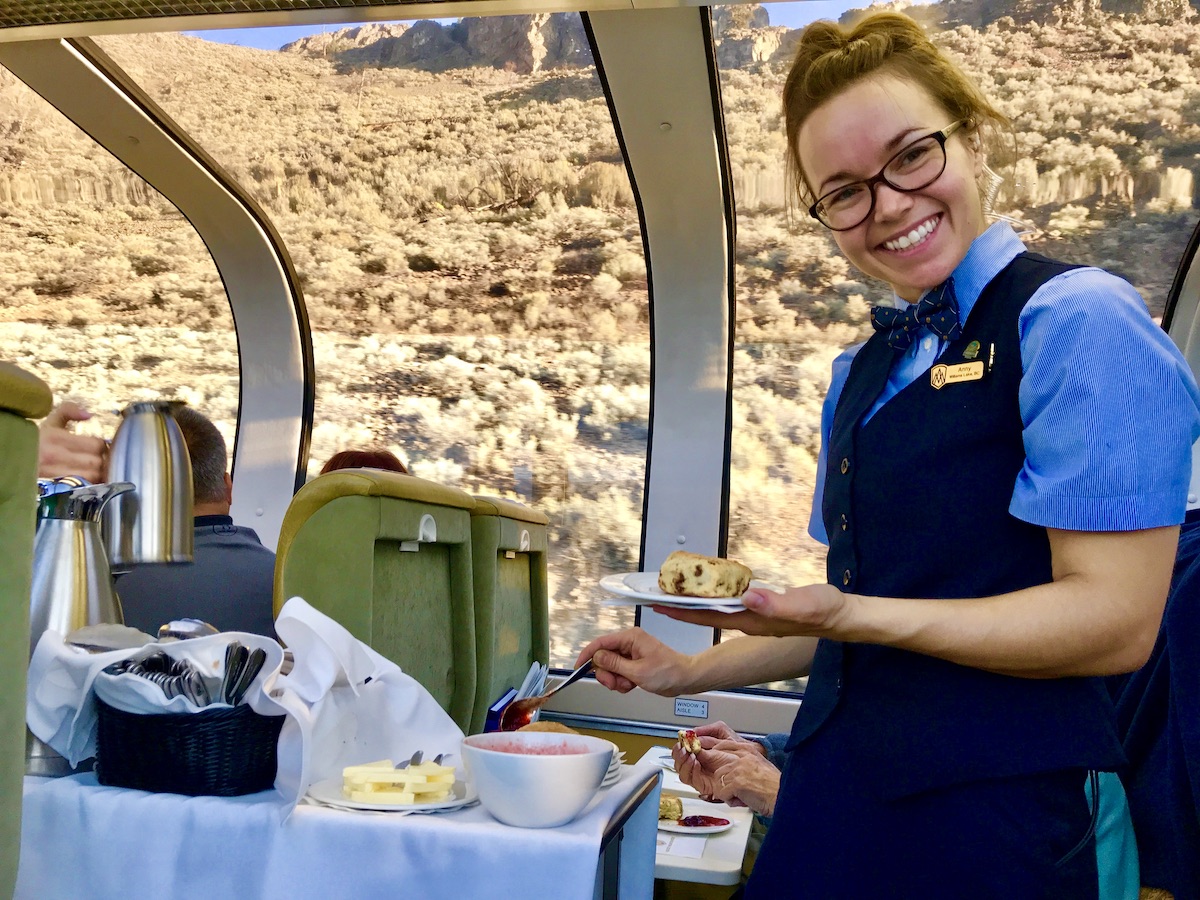 Disclosure:  Rocky Mountaineer hosted the author, but any opinions expressed in this post are her own. 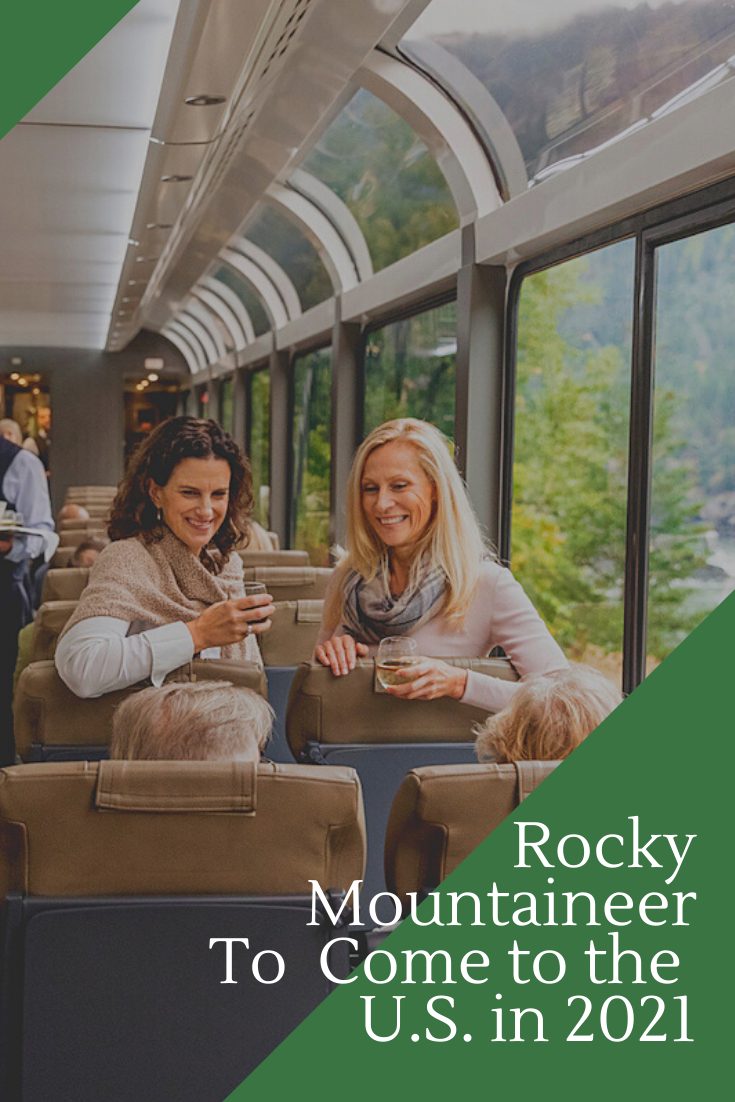