The Reynolda House Museum of American Art is one of the few surviving, well-preserved examples of the American Country House movement. Now listed on the National Register of Historic Places, the former Winston-Salem, North Carolina home of tobacco tycoon R.J. Reynolds and his wife, Katharine, is not only an archived tribute to one of America’s iconic families but also one the top museums in the country for American art.

Built in 1917, the 64-room Reynolds Mansion was part of a 1,067-acre estate. In addition to the 35,000-square-foot manor house, it included a 20-acre planned village with a working farm and dairy, a blacksmith shop, a church, a school and a post office plus a formal garden. All buildings featured white stucco with green tile roofs.

The restored mansion, known as Reynolda House, opened to the public in 1965 dedicated to arts and education. It became an art museum in 1967. It has been affiliated since 2002 with neighboring Wake Forest University, where the late Maya Angelou was named the first Reynolds Professor of American Studies in 1982. 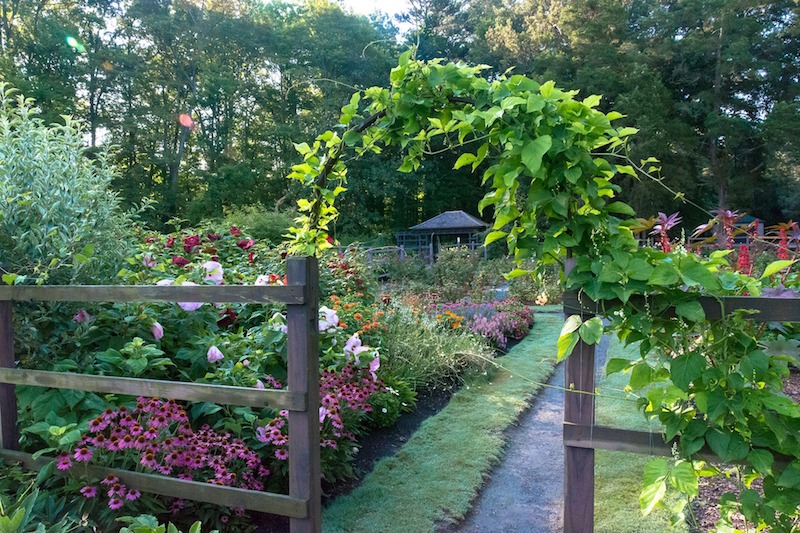 Take time to enjoy the formal gardens at Reynolda House.

Approaching the home in spring, we’re delighted by the tranquil setting, stunning architecture and meticulous grounds sprouting thousands of daffodils. It’s not our first visit and we recommend fall visits for an explosion of color.

An admission ticket opens the doors to a world of the socially connected, wealthy and culturally well-heeled who played a leading role in the development of America around the turn of the 20th century.

Much of the extensive art collection is attributed to the keen eye and wide interests of the Reynolds’ granddaughter, Barbara Babcock Millhouse, who began collecting art in the 1960s and was named museum president at age 26.

Also considered one of the “Great Houses of the South,” Reynolda House features changing exhibitions, concerts, lectures, classes, film screenings and other events. A summer tradition on the grounds is “Cinema Under the Stars” with weekly offerings such as Breakfast at Tiffany’s and The Great Gatsby. 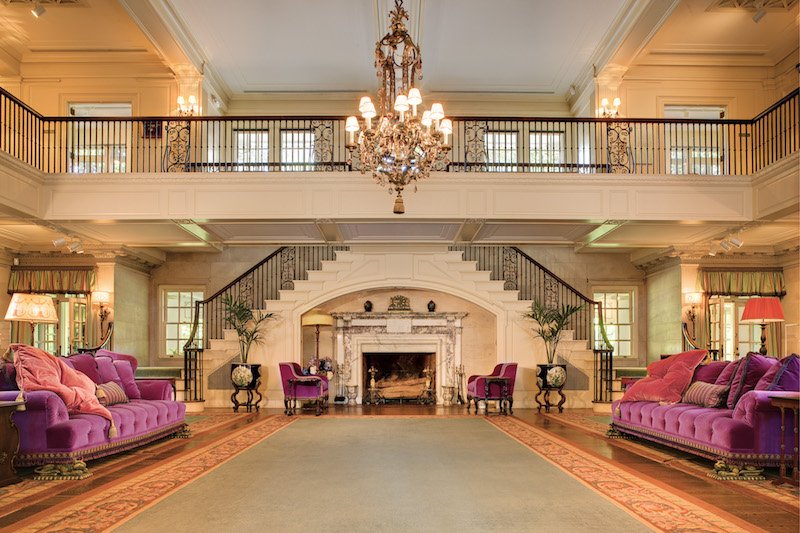 The reception hall of the 35,000-square-foot Reynolds Mansion

During our recent visit, we explore the Reynolda House Museum using the free, downloadable app, Reynolda Revealed, which was easy and informative, offering highlights room by room.

But we put the app aside as the time neared 2:45 p.m. when a staffer cues up the auto-play on the magnificently preserved Aeolian pipe organ. This festive occurrence fills the grand, two-story reception hall with musical strains that spur the imagination. Perhaps these tunes were once the background for the family entertaining important business associates. On another day, perhaps, the youngest of the Reynolds clan were gathered with their own peers begging for music.

The paper rolls of the organ’s automatic player device from 1917 have been digitized for use today. Incidentally, an Aeolian organ from 1932 still fills Durham’s Duke University Chapel with music.

Reynolda’s historic revival furnishings show preferences for Italian Renaissance, English Tudor and Adam styles, and French 18th century. Exhibits offer glimpses into the family’s lifestyle. Two attic rooms display toys from the four children as well as their parents’ lavish formal wear. Katharine, who was active in the estate’s operations, designed and sewed her own wedding gown, which is included in the collection.

On view in the kitchen and dining room are custom china and a 15-piece silver punch set with an incredibly ornate flower motif, a fourth-anniversary gift from R.J. to his bride.

On the covered sun porch, we linger over the life-like collection of porcelain birds, amazed at the highly detailed feathers, flowers and branches that support them. All are the work of British sculptor Dorothy Doughty. We also look for details of bees, wasps and turtles in the original floor tiles. 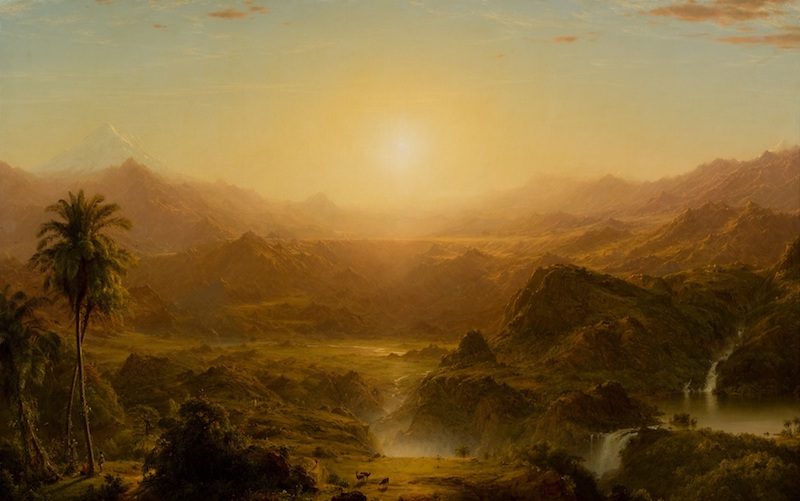 Learning about a favorite painting

Among our favorite discoveries in the house is a work by Frederic Edwin Church, “The Andes of Ecuador,” created in 1855 following the artist’s first trip to Ecuador in 1853. Appreciating it requires both close-up study to distinguish its marvelous features and stepping back for an overview perspective of the 48- x 76-inch painting.

According to museum notations: “The Andes of Ecuador combines the scientific and religious concerns of Church’s time in one grand panorama. The infinite botanical detail, the terrifying depths of the abyss, and the overwhelming sense of unlimited space combine to communicate a powerful sense of the sublime…. through a dramatic sweeping vista that contains several small vignettes and seemingly endless details.”

This visit, we more closely study the modernism “For Internal Use Only” by Stuart Davis. We’re drawn in by bold colors: yellow, red, green and blue. Museum notes explain that “the painting pays tribute to Davis’s friend Piet Mondrian, known for his primary-colored gridded compositions. Davis and Mondrian, a World War II refugee, frequented jazz clubs in New York…. The painting contains an abstracted marquee, piano keys, a bowtie, and a black face — all signifiers of the New York boogie-woogie jazz scene.” 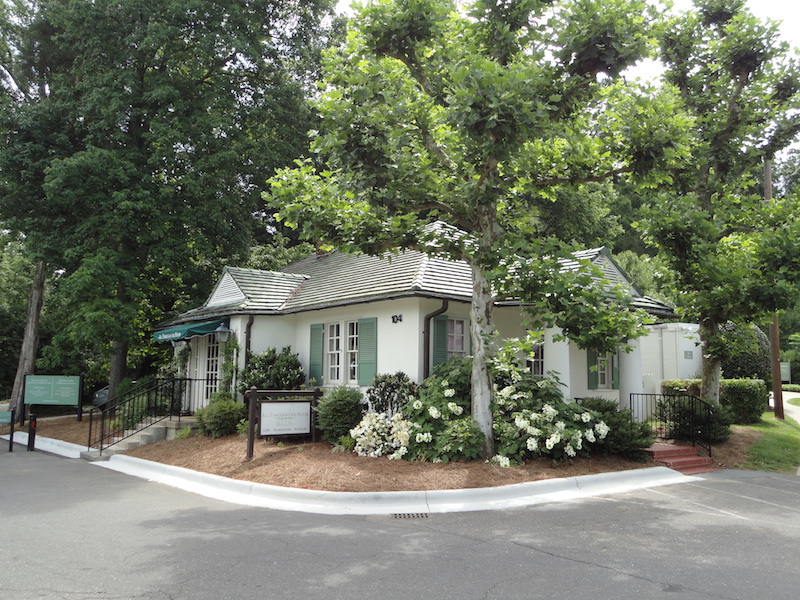 While away the day exploring not only Reynolda House but also Reynolda Village.

We find it’s easy to spend an entire day at Reynolda, not only for the lovely, historic house and its art, but also for the shopping and dining at adjacent Reynolda Village and Gardens, part of the Reynolda Historic District. Originally modeled after an English village, it’s a quaint destination in an idyllic setting. The conserved farm buildings still feature the green roofs and white exteriors matching Reynolda House.

All photos courtesy of Reynolda House Museum of American Art

Disclosure: The author’s stay was hosted by the Winston-Salem Convention & Visitors Bureau 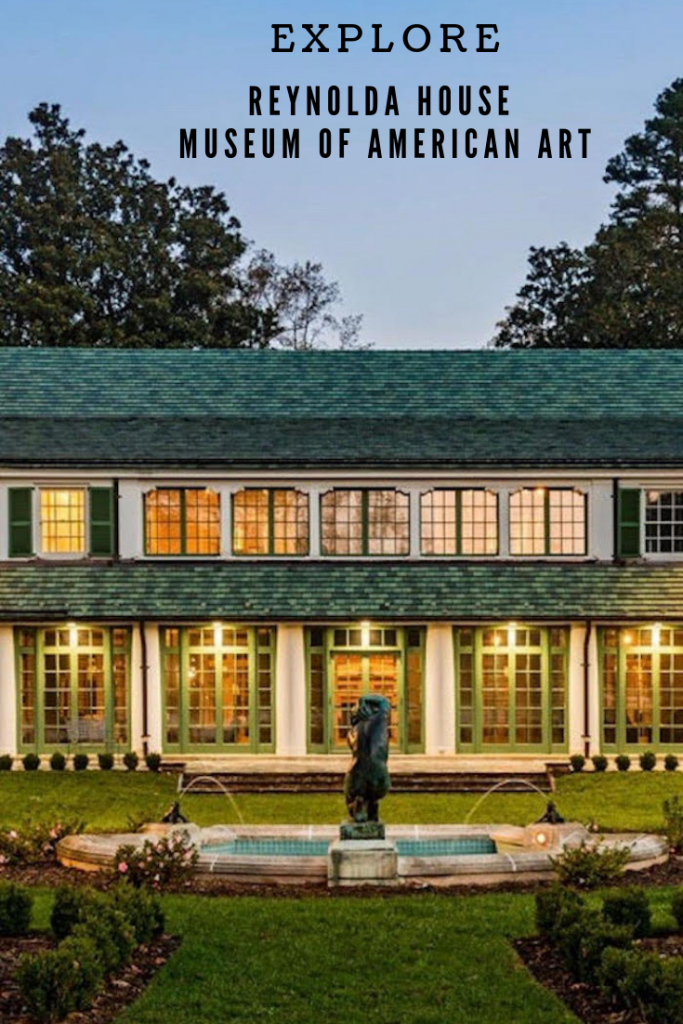