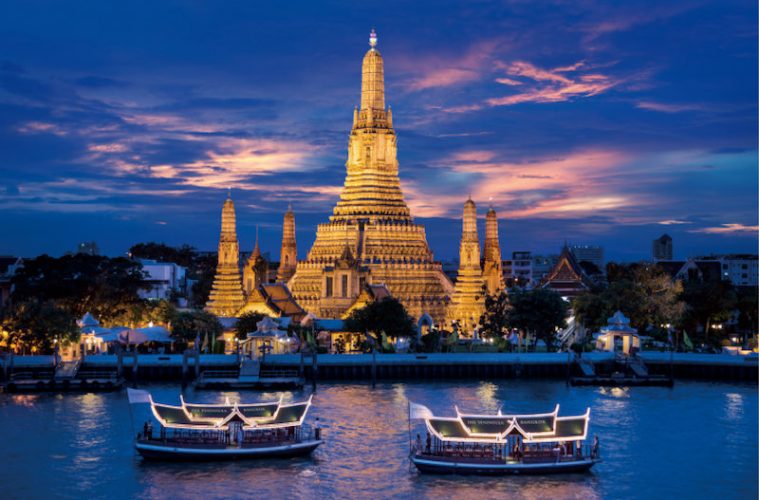 The Peninsula Bangkok: Refined Elegance at a Prime Location

When I learned about the Kadoorie brothers during a Jewish tour of Shanghai, I added a stay at a Peninsula Hotel to my bucket travel list. These hotels are known worldwide for their superb white glove service and dazzling structures. They can be found in Hong Kong, Shanghai, Beijing, Tokyo, New York City, Beverly Hills, Chicago, Paris, Bangkok, and Manila.

In the latter part of the 19th century, Ellis and Elly Kadoorie became affluent entrepreneurs who invested in companies and hotels in Hong Kong and Shanghai. After acquiring great wealth, they set up philanthropic agencies in Asia, the Middle East and other places around the world.

After World War II, the Kadoorie family helped Shanghai’s Jewish refugees find safe passage through Hong Kong. They sheltered these individuals temporarily in The Peninsula Hotel Hong Kong (which first opened in 1928) before repatriation to other countries. The family also expanded their post-war philanthropic work to assist vulnerable people in other locations.

My first Peninsula Hotel experience was booked through Celebrity Cruises as part of a multi-day shore excursion package during an immersion cruise that stopped in Laem Chabang, Thailand as well as Hong Kong, Vietnam, Thailand, and Singapore. 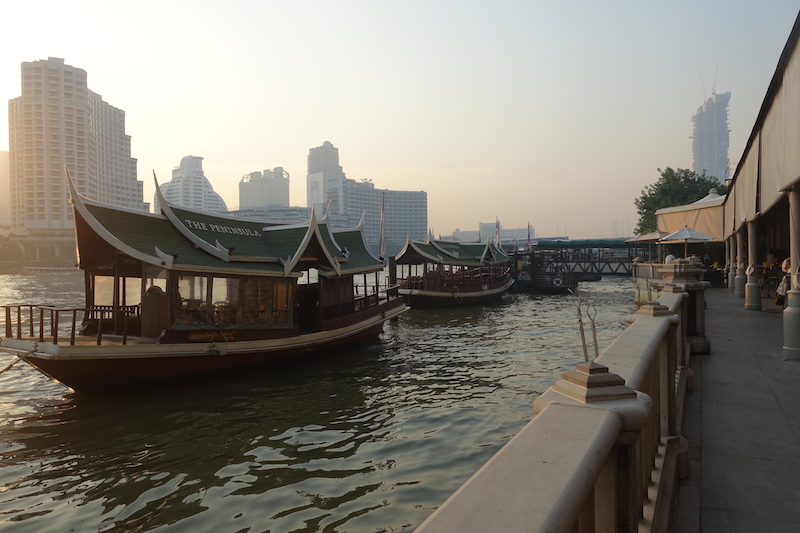 Understated elegance at The Peninsula Bangkok

The wood planked floor in the entryway led to the main room designed in a neoclassic tradition. Three sets of oversized windows encased in wooden paneling provided panoramic views of the Chao Phraya River and the surrounding area.

This spacious room, decorated in earth tones, included a comfortable two-cushioned upholstered sofa, a full-sized desk and chair, and a king-sized bed. Down the interior hallway were: a small bar with a tea set; an alcove that included a cushioned daybed area above a set of drawers; a closet; and a black and cream-colored marble bathroom with two vanities, a toilet, deep tub, and walk-in shower. 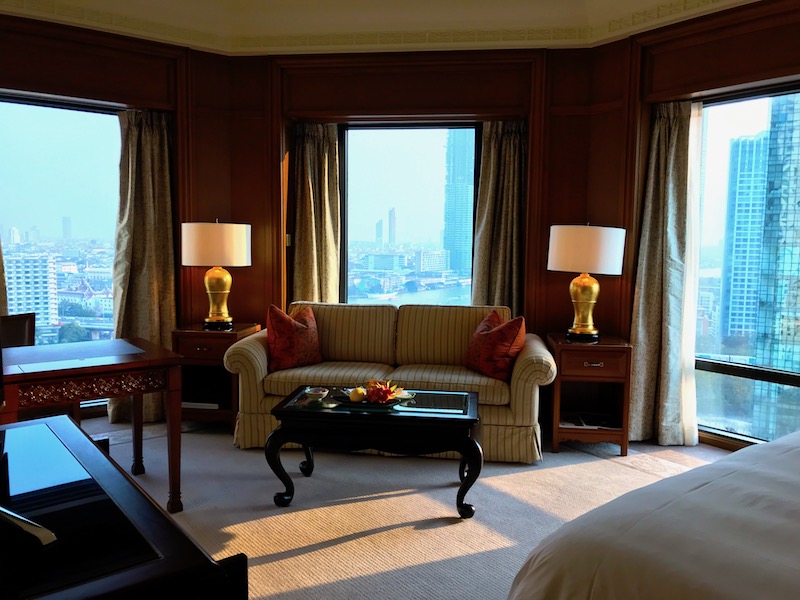 Panoramic view from our room in the Peninsula Bangkok

Our full-day touring schedule called for an early start. This allowed us to catch the sun rising across the river as we selected items at the bountiful buffet in the hotel’s River Café & Terrace.

The exquisite surroundings matched the impressive selection of Thai and continental foods displayed in multiple rooms. Standard homemade breakfast items were complemented with a wide array of lunchtime entrees prepared at cooking stations overseen by a team of multinational chefs. 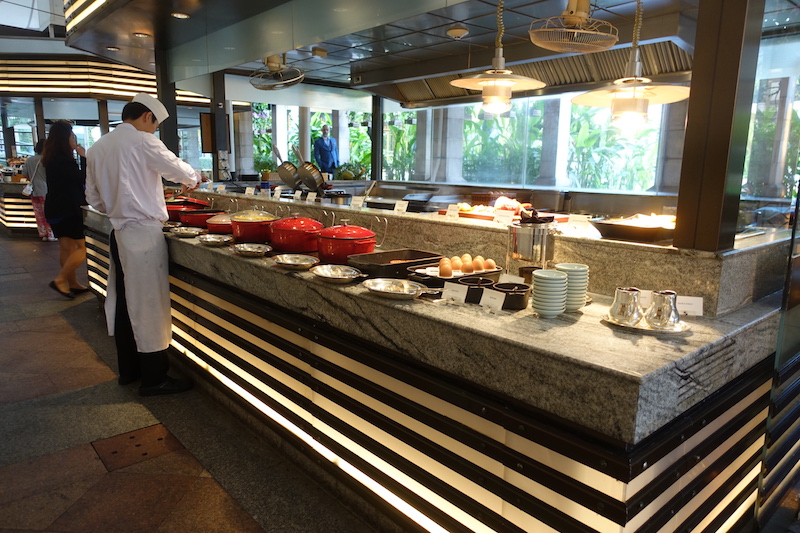 Best of all, we and other guests could savor every morsel of our breakfasts while watching the boats zip back and forth on the river, or gaze at the serene garden nearby.

Our tour package also included a Thai lunch with a set menu, served on traditional blue and white china in the multistory, Thai-inspired lobby facing the riverfront. The first course was tom kha gai, a citrus-flavored coconut chicken soup with galangal (a root in the ginger family). The kitchen accommodated my request for a vegetarian version. 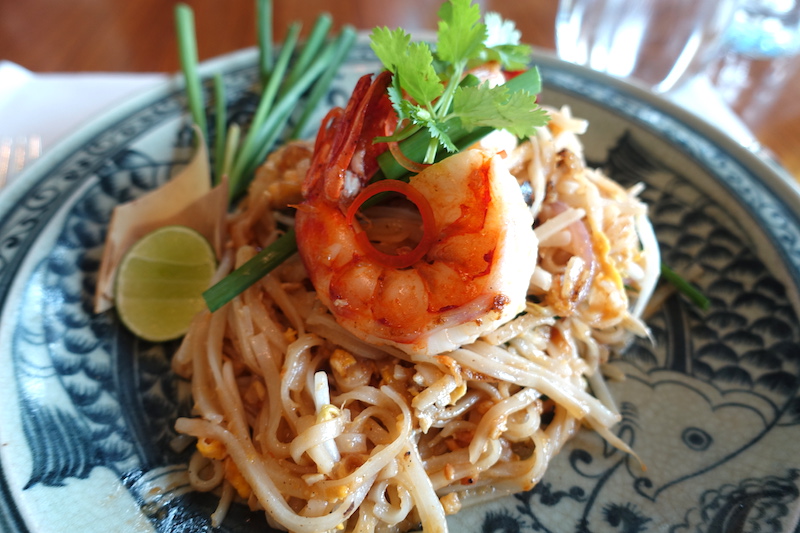 For the main course, I indulged in a generous portion of Phad Thai Goong, a stir-fried dish with Thai rice noodles, prawns, tofu, and bean sprouts. The meal was concluded with a Pol La Mai Ruam, an assortment of freshly-sliced exotic fruits with coffee and tea. 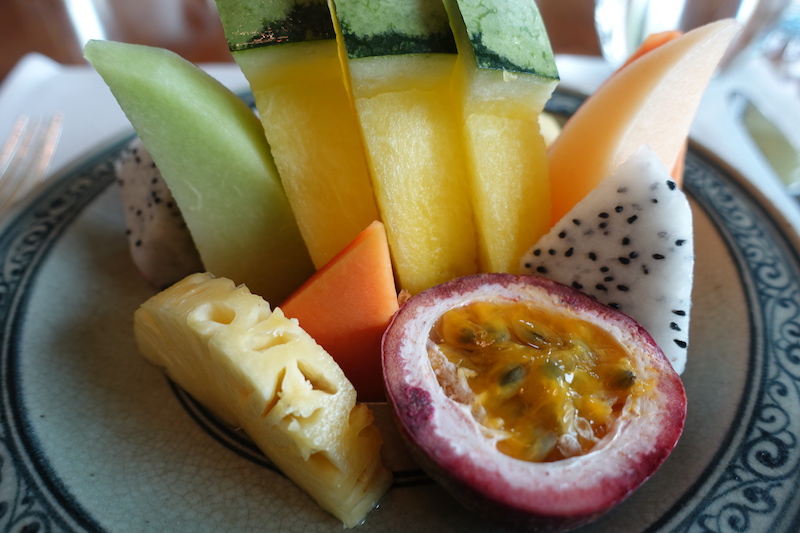 Exotic fruits in the Lobby Dining Room of the Peninsula Bangkok

Had we not been relegated to a tight schedule, we would have reserved a table at Mei Jiang, a Cantonese restaurant in the hotel, where we could taste Executive Chef Ball Yau’s masterpieces. The Michelin Guide recommends the dim sum and the health set menu.

Places to relax and unwind

If I ever return, I would certainly start my day at the fitness center and indulge in a spa treatment. 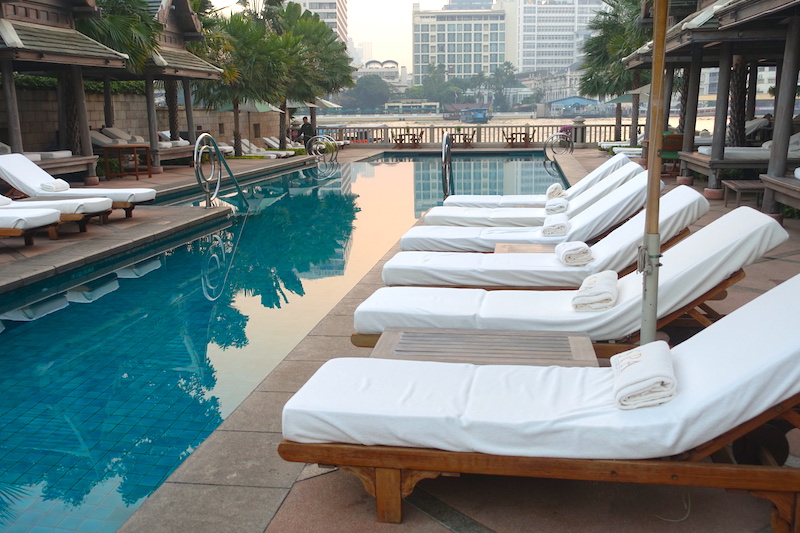 Poolside at the Bangkok Peninsula

In a city known for excessive traffic, it’s essential to select a hotel with a convenient location. In Bangkok, that is synonymous with access to the river transportation system.

The Peninsula Bangkok sits beside the Chao Phraya River, close to the Sathorn Bridge. This location makes it easy for business travelers as well as tourists to visit some of the city’s main attractions: The Grand Palace; Wat Arun, the Temple of Dawn; Wat Pho, the Reclining Buddha; and the Royal Barges Museum. 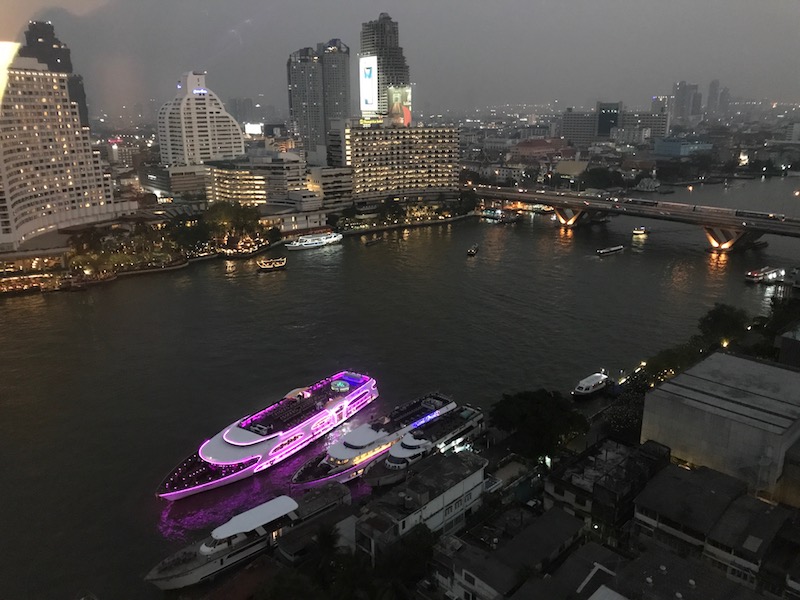 The authors received a media discount for their shore excursion package.