The shuttle bus drops our bikes and us off at a refurbished train station in the small Quebec town of Mont Laurier. It is too late for second thoughts. The trip from Saint Jerome, the jumping-off location for our adventure, had taken only two-and-a-half hours. Still, I know getting back there will take the better part of four days and require more peddling than I’m used to. My eyes follow the paved P’tit du Nord bike trail until it disappears into the fall foliage.

Five other couples garbed in sleek Lycra clothing, clip-on bike shoes, and fingerless gloves had shared the same bus. They ready themselves in a practiced routine and head off down the trail. My wife and I fasten our panniers onto the bikes, buckle on helmets, and don light jackets. We take a photo in front of the 201-kilometer marker and head into the unknown. 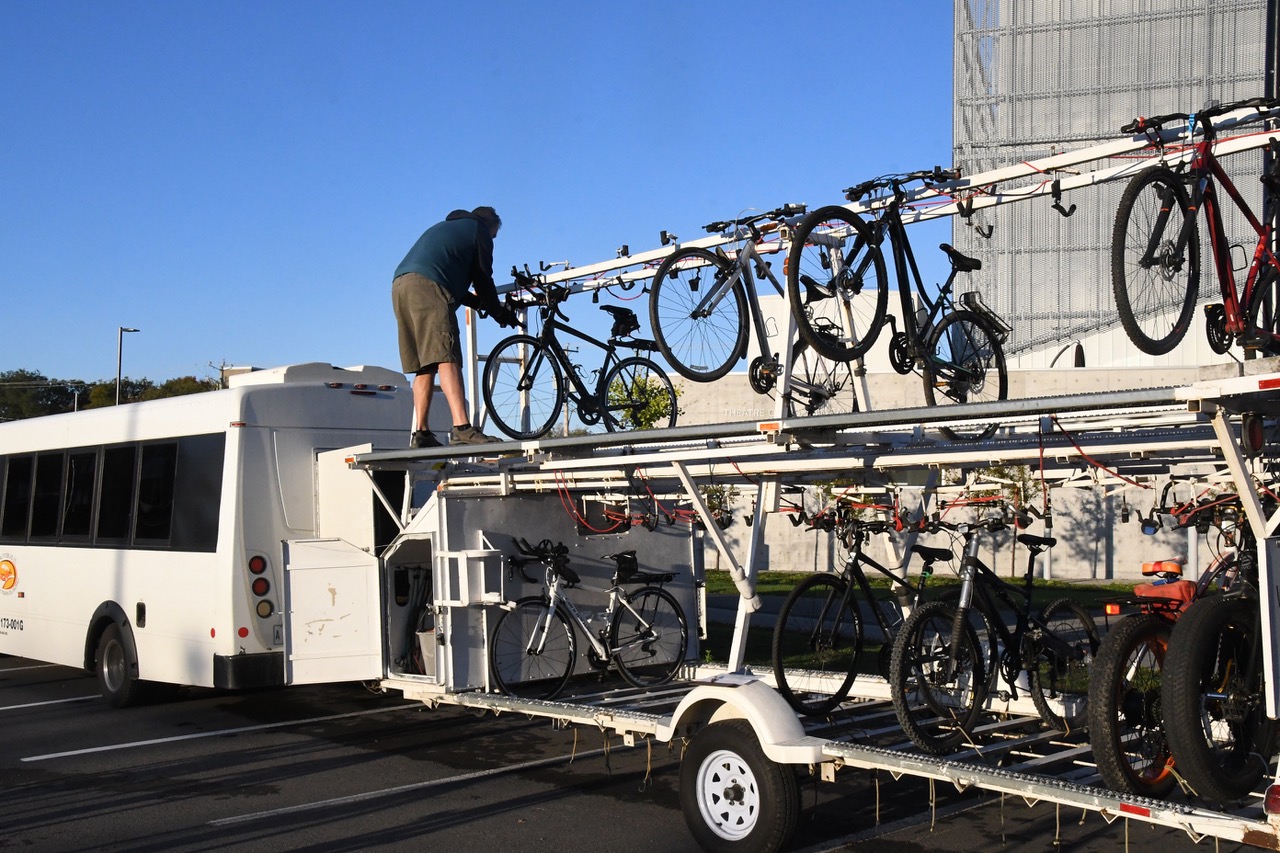 Luggage and gear shuttle is one of the perks of pedaling Quebec’s P’tit du Nord bike trail (credit: Jamie Ross)

Bicycle tourism is booming around the world as an excellent way to experience a region. Le P’tit Train du Nord bike trail is a great way to get to know the Laurentian Mountains up close and personal. It offers beautiful countryside, delicious local food, charming small villages, excellent signage, and relatively easy cycling.

And trip planning is painless. Everything can be arranged ahead: shuttle, bike rentals, meals, inns, and luggage-handling between accommodations. The organization that goes into moving people, bikes, and luggage is impressive.

Bicycle tourism is booming around the world as an excellent way to experience a region.

Built over nearly twenty years, starting in the 1890s, the P’tit Train Du Nord (the little train of the north) railway snaked through the Laurentian mountains, bringing freight and later tourists north for skiing and wilderness adventure. Many towns and villages sprang along its tracks. As automobiles and roads took over the region in the mid-1900s, demand for the train diminished, and in 1989 the railway ceased operations. 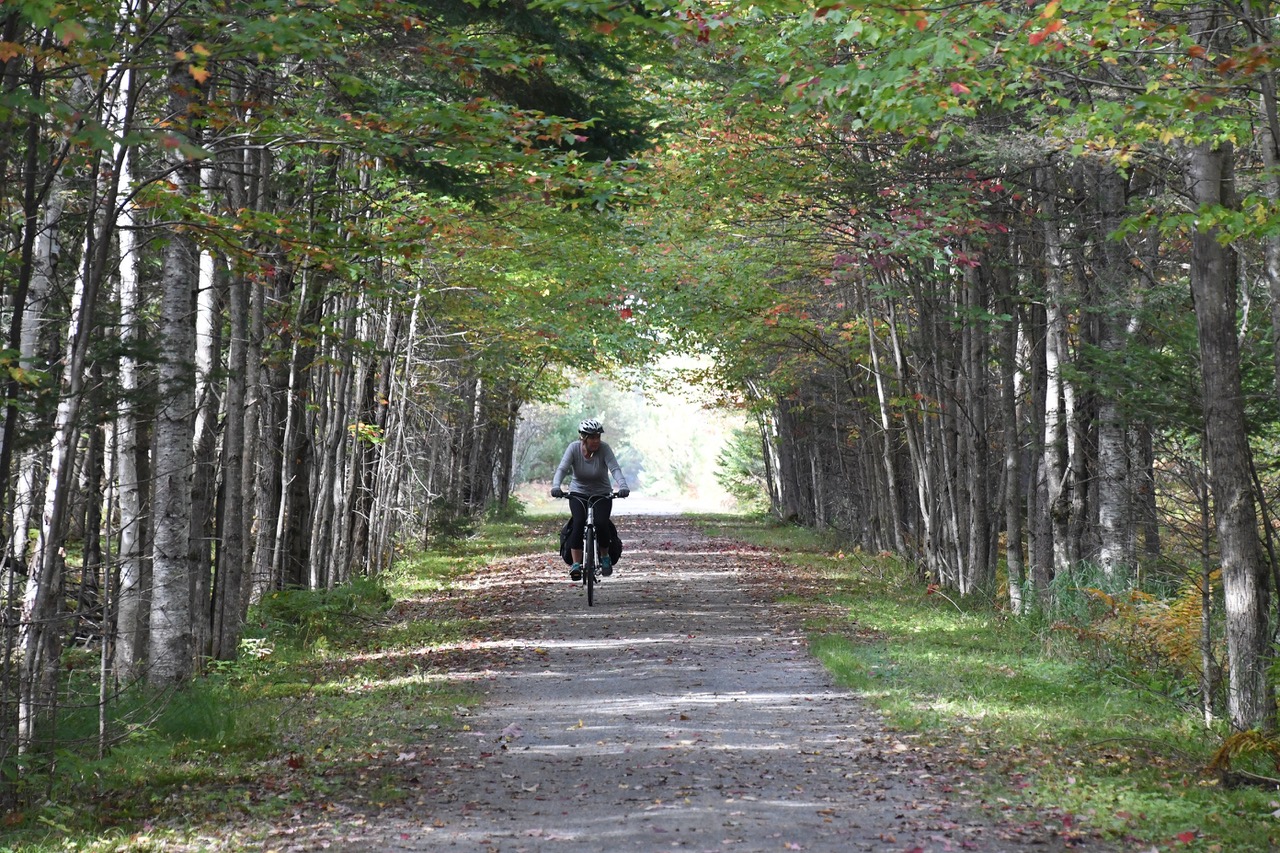 In 1996 the route got a new lease on life, when tracks were removed, and the old railway bed was converted into a rail-trail. And, the former railway stations were transformed into cafés, shops, and museums along the route. Called the longest linear park in Canada, Le P’tit Train Du Nord bike trail is covered in asphalt in the northern section and packed dirt and crushed stone in the south.

Cycling an average of 50 kilometers (31 miles) per day might have seemed a bit daunting for casual cyclists like us. In truth, with full days to complete the trek and plenty of stops and breaks on the route, each day’s journey seemed to fly. While the bike trail does pass through the mountains, it’s mostly flat with only the occasional uphill grade.

The trail skirts rivers, crosses valleys, and runs alongside lakes, ponds, and rivers. We stop to explore galleries and shops in the restored train stations and detour into a trailside town to pick up a bottle of wine, a baguette, and an assortment of Quebec cheeses. We stuff these essentials into our saddlebags for a lunchtime picnic.

Make advance reservations at the inns along the bike route (credit: TourismeLaurentides)

After 59 kilometers, we stop for our first night at Auberge Chez Ignace on Grand Lac Nominingue. As always, our luggage has been delivered ahead and awaits us in the lobby. We change and then take a Belgian beer down to the wharf on the lake. We enjoy dinner in the inn’s restaurant with several other cyclists. In the morning, dressed for the chilly, clear autumn day, we depart.

We cycle along the meandering trail, passing through rock-cuts of dark granite, through the belly of sweeping valleys, and alongside leaden lakes now quiet after the summer rush. The bike path wraps around the shoulders of hills and carries on through a peaceful forest. We’re thankful that we almost have this trail to ourselves.

From Labelle to Mont-Tremblant, the paved path turns to crushed stone. After we cross a bridge, the trail straightens along the side of an open valley.

The late afternoon sun throws its enriching light over the hillside. An explosion of color; vivid reds and vibrant oranges, mixed with golds, greens, burgundies, and yellows, overpowers our senses. This kaleidoscopic display butts up against a rocky escarpment and sweeps down to the narrow bay of a Laurentian lake. Here the colors are mirrored in the shimmering royal blue water. This awe-inspiring view is like a painting. I pull my bike off to the side and grab my camera.

Mont-Tremblant: a stop along the P’tit du Nord bike trail

The pedestrian village at the base of Mont-Tremblant is filled with pubs, shops, restaurants, cafés, and accommodations, making it a fun stop when pedaling the P’tit du Nord bike trail (credit: Station_Tremblant)

Heading south toward the famed resort area of Mont-Tremblant, we encounter more cyclists along the trail; families out enjoying the fantastic trail network and locals commuting to work. Cycling is part of the culture in the communities along Le P’tit Train du Nord. At the well-marked road crossings, drivers courteously stop and let us cross the road. After checking into the B&B Le Voyageur, we hop on a free bus to explore Mont Tremblant resort and its pedestrian village, pubs, shops, restaurants, and cafés.

Cycling is part of the culture in the communities along Le P’tit Train du Nord.

On day three, the weather turns. So we pull on our rain gear and depart into a steady wet drizzle, facing the longest uphill climb of the trip towards Val-David. At Agathe-des-Monts, in need of a warm spot for a hot lunch, we stop at the train station visitor’s center, and the staff directs us into the Couleur Café. In the afternoon, the sky darkens, and thunder echoes through the mountains, chasing us down the trail.

Our inn for the night, the Auberge de la Gare in Saint-Adèle, sits just uphill from the P’tit Train Du Nord bike trail. We store our bikes in the livery and just make it in the front door when the skies open and the rain pelts down. Then, with a glass of red wine in hand, we cozy up to the fireplace, thankful for our good timing. That night our hostess, Ginette Blais, serves a delicious hot broth fondue feast in the rustic dining room.

It is a shorter trip (32.5 km) on our last day, and we begin to feel the press of civilization the closer we get to Saint-Jérôme. The wildness has disappeared, but there are still many beautiful sections, especially along the white water of the Rivière du Nord. It takes us just 2.5 hours to roll under the archway that marks Kilometer “0” on Le P’tit Train du Nord. Although the journey is not overly difficult, we still feel quite pleased with what we accomplished. 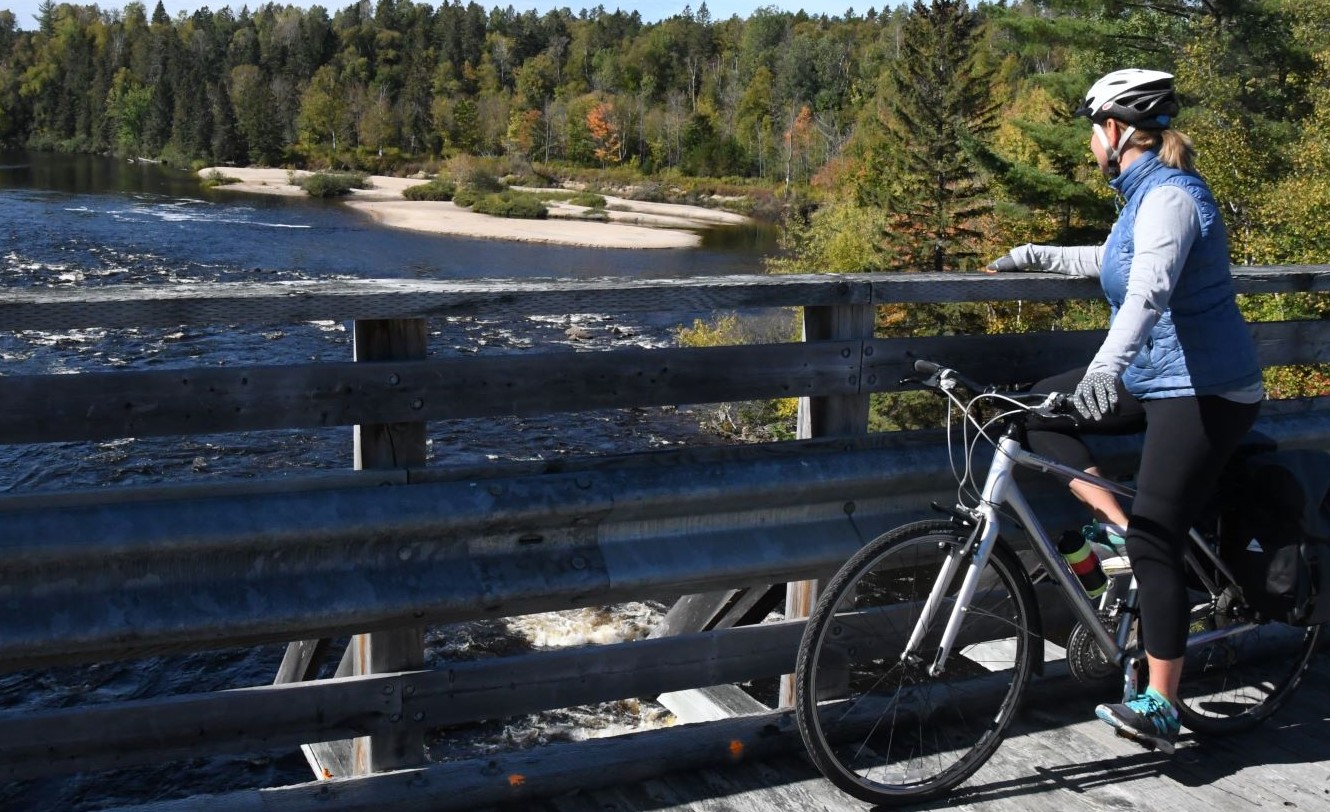 About bicycling : Biking on Vacation: You’re Never Too Old

A COVID-19 update: What you need to know

Though biking with your partner or family along an outdoor trail is recognized as a relatively safe activity, please take note of temporary closures, travel advisories and other pandemic restrictions. 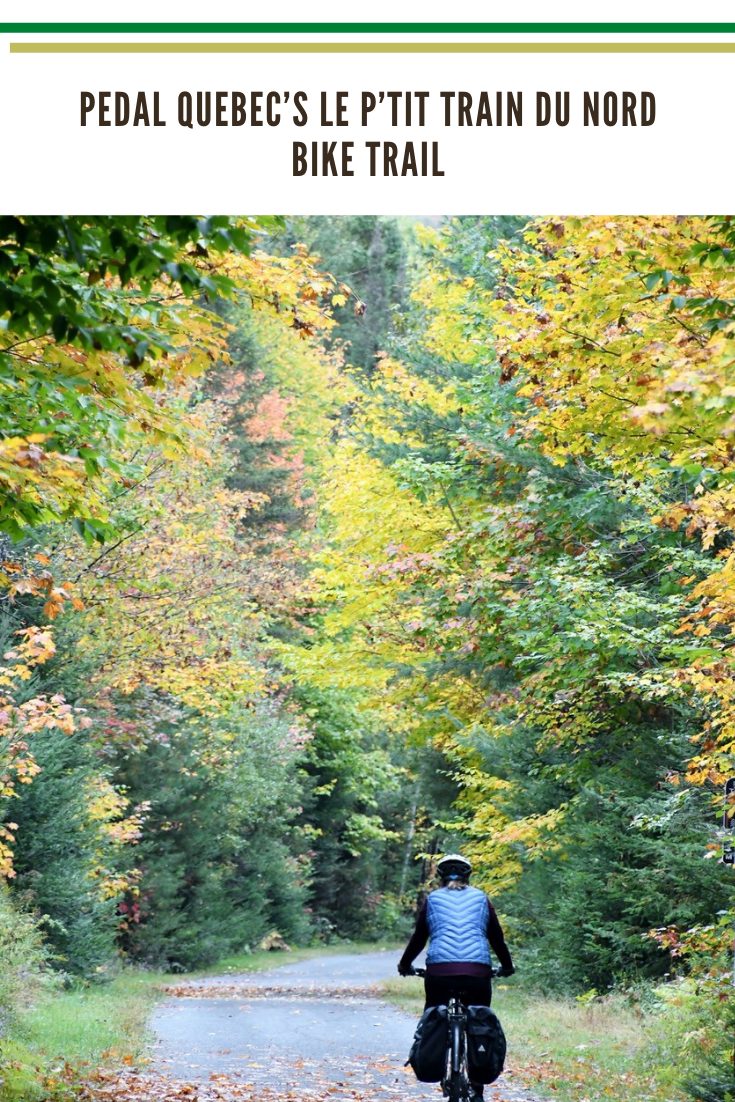