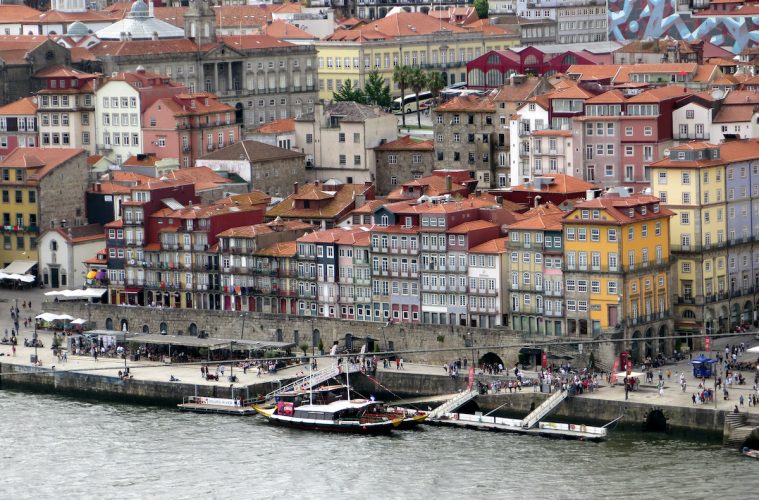 Porto: A Grand European City With A Rich History

Porto was it for me. After a few weeks visiting other popular destinations in Portugal, like Lisbon, Sintra and Obidos, I found myself fresh off the train in front of our rental apartment, at an outdoor café beside the Douro River. Before me spread one of the most dramatic riverfront city scenes I’d ever laid eyes on.

Arching over the river right in front of me was Ponte Luiz I. A graceful double-decker, wrought-iron bridge designed by a disciple of Gustav Eiffel in the 1880s to link Porto with Vila Nova de Gaia on the other side. Cars and pedestrians crossed the bridge on the lower level as gliding metro cars and more people traveled the upper deck. Meanwhile, barges and pleasure boats chugged past.

Beyond the bridge and across the river, bubble-shaped cable cars floated through the air as if in a dream. Fishermen lined up along the quay hoping for the best. Cries of seagulls gave voice to the ocean just two miles away. It was pretty much love at first sight, and I hadn’t even seen the rest of the city, out of sight on a cliff above the river. 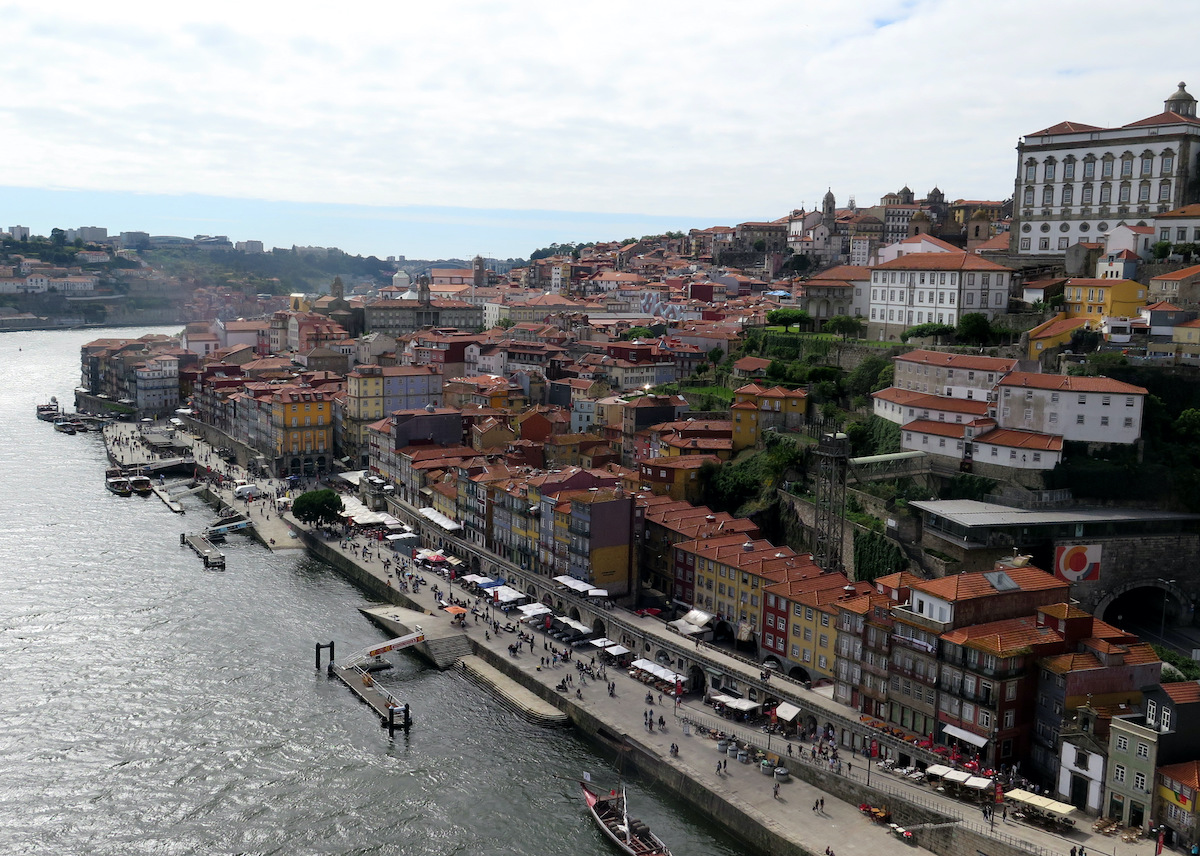 Portugal’s second-largest city occupies an almost impossible topography, beginning with a steep rocky gorge sliced through by the Douro River eons ago. Rising from the north riverbank is the Ribeira historic quarter, where colorful, balconied homes sidestep up steep and narrow streets to central Porto above. The next morning, as I took the Funicular dos Guindais from the river up to the city, I imagined Porto spreading flat on a plateau. Instead I found a hilly city punctuated by dips and valleys and filled with imposing administrative edifices, embellished buildings housing shops, sidewalk cafes and restaurants, and churches and homes stunningly clad with decorative azulejos (tiles), for which Portugal is famous.

If forced to compare Portugal’s two largest cities, I might describe Lisbon as a grand dame, somewhat reserved, while Porto is like her spirited younger sister. Virtually intact from medieval times and spared the horrific 1755 earthquake that leveled Lisbon, Porto surely rates as one of Europe’s grand cities. No wonder its Historic Centre was declared a UNESCO World Heritage Site in 1996.

Change in the air

Of course, that isn’t always all a good thing. Development and tourism can severely impact cities, villages, landmarks, national parks and other places with UNESCO designation, such as Japan’s Mt. Fuji or Vienna’s historic center. A waiter filled me in on how Porto was changing. Ten years ago, he said, no one wanted to live in Centro (central Porto) because it was rundown and in bad shape. Spurred by an increase in tourism, however, Centro has been cleaning up its act with urban renewal projects, with skyrocketing prices to boot.

He wasn’t kidding. Everywhere I looked, cranes hovered over the city. On a small stretch of Rua des Flores, reputedly one of the most beautiful streets in Ribeira, I counted more than ten apartment buildings undergoing renovation, making me wonder how many residents were being gentrified out of their homes by higher prices and money-making Airbnb. Outside an upper-floor apartment, I saw a handmade banner that declared (translated here into English) “No tourism in my house.” The guidebook my parents gave me from their trip to Portugal in 2006 said that the Ribeira riverfront was lined with inexpensive cafes where locals gathered. As far as I could tell, the only locals now were those working at overpriced restaurants packed with foreigners.

But while tourists dominate the promenades on both sides of the Douro River, they’re readily absorbed in the rest of Porto, making it easier to feel you’re in Portugal rather than elbowing visitors in, say, Sintra. Furthermore, renovations spurred by tourism have also resurrected aging icons, including Café Majestic, founded almost a century ago and considered one of the city’s finest examples of Art Nouveau architecture, and Funicular dos Guindais, built in 1891 and brought back to life after a century of inactivity. The historic Mercado do Bolhão, one of Porto’s major sightseeing spots, has been undergoing a two-year renovation, with a reopening slated for late 2020; until then, the market is in a temporary location just a few blocks away. 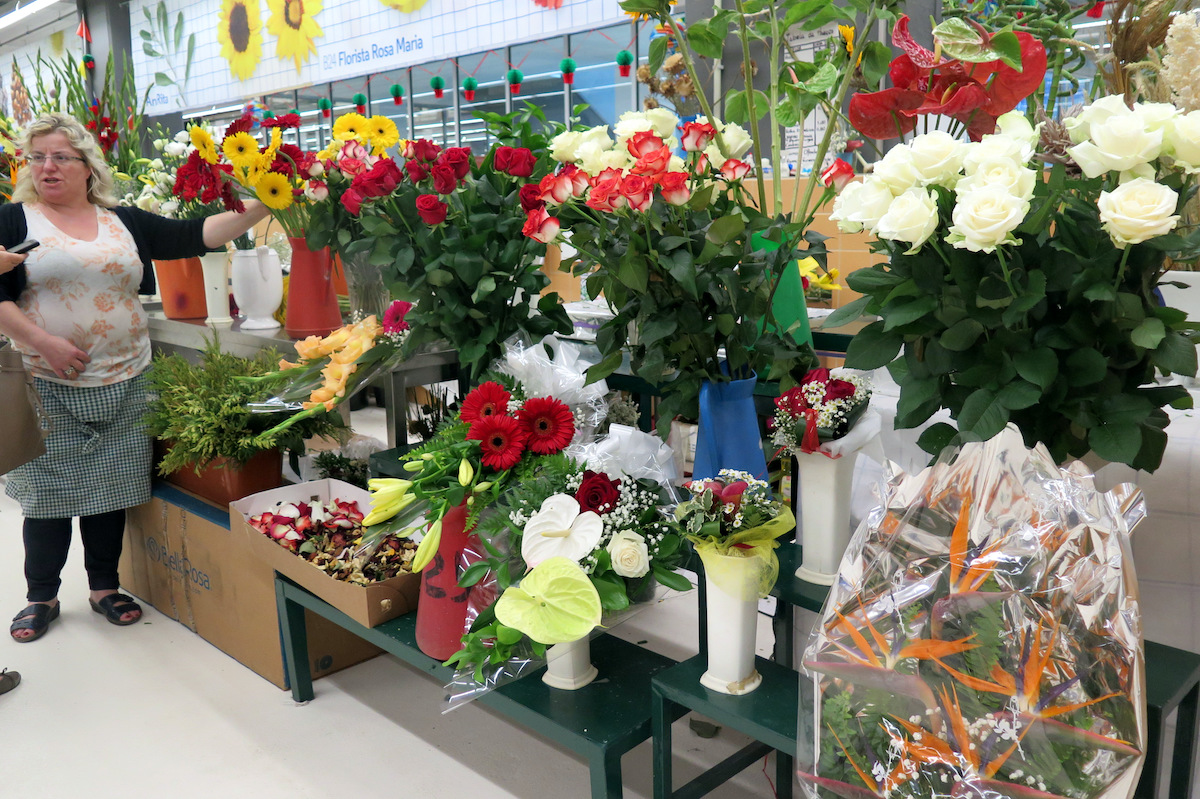 Like much of Portugal, Porto saw a succession of settlers, including Celts, Visigoths, Romans and Moors. Its location on the coast gave Porto one of its most lucrative industries, shipbuilding, while the perfect climate up the Douro River ensured Porto’s other claim to fame, port wine. Much of Porto’s grandeur comes from those who made fortunes in Portugal’s overseas colonies, evident in its elegant homes, official buildings like the former stock exchange, now open as the Palacio da Bolsa, and its many churches.

Two of the most notable churches are the 18th-century baroque Church and Tower of Clérigos, with 240 steps to the top providing a panorama over the city, and Igreja de São Francisco, erected in 1410 as a Gothic church but with an interior later transformed into a resplendent baroque masterpiece with gilt woodcarvings. 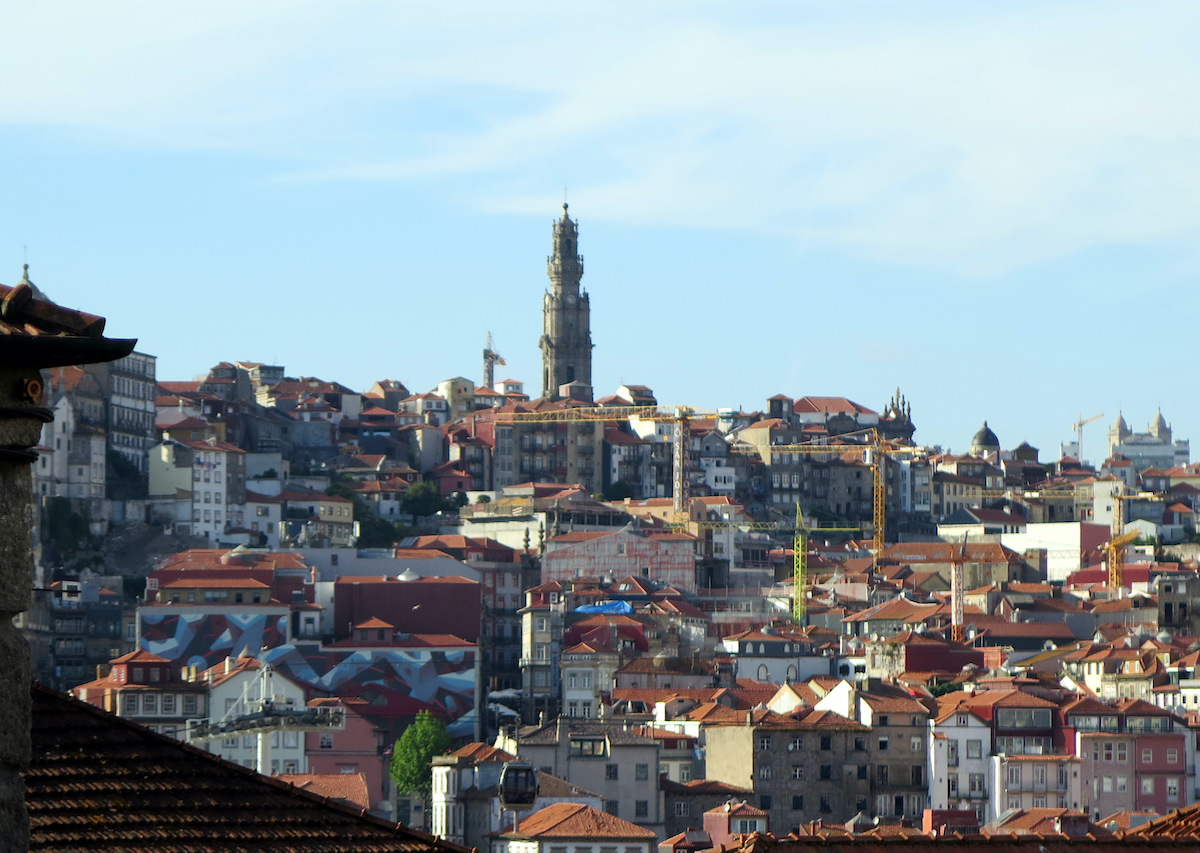 Tower of Clerigos, a city landmark

Porto’s most significant religious building is Sé do Porto (Porto Cathedral), which occupies the city’s highest point and affords great views toward the Douro River from its plaza. I find the cathedral rather formidable and stodgy compared to the city’s churches, but it’s been around for an awesome 900-some years. Built in the 12th century in Romanesque style, it has changed over the centuries to reflect the architectural trends of the times, including a 14th-century Gothic cloister and 17th- and 18th-century baroque alterations.

I’d also recommend stopping by São Bento Railway Station. Its main hall is adorned with an incredible 20,000 azulejos painted by Jorge Colaço depicting momentous events in Portuguese history. Most visitors also pay homage to Livraria Lello, a 1906 bookshop that’s reputed to be one of the most beautiful in the world. I wouldn’t know, however, as there was a long queue and a 5 € admission to get in (which goes toward the purchase of books). JK Rowling, who lived in Porto in the early 1990s, is said to have been inspired by both the bookshop and Café Majestic when writing her Harry Potter series.

Instead, my travel companion and I headed over to Museu Nacional de Soares, ensconced in an 18th-century palace. Founded in 1833 as the country’s first public art museum, it contains a wealth of paintings, silver, glassware, tapestries, musical instruments, jewelry, sculpture and other decorative objects. Its collection of Portuguese faience (glazed pottery) produced between the 17th and 20th centuries in various areas of the country is especially noteworthy. There are also treasures from India, Japan, China and other countries reflecting Portugal’s many centuries of trade. Because of my personal interest in Japan, I was especially captivated by a magnificent Japanese screen from the early 17th century, which tells the story of Jesuit missionaries arriving by boat to trade with the Japanese. 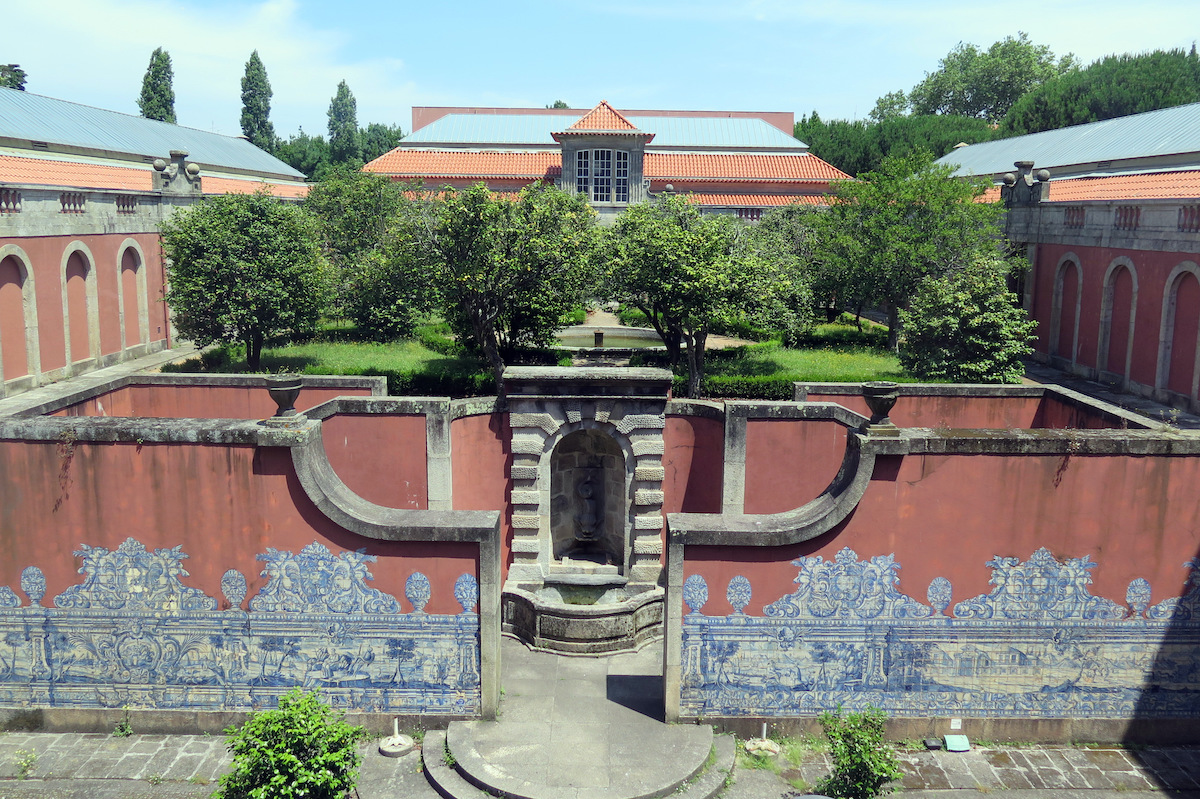 Finding the essence of Porto

But as the person working in the tourist kiosk told me, tourists who make the rounds clicking off Porto’s most famous sights will miss the essence of the city. Rua de Santa Catarina, Porto’s main shopping street, is filled with sidewalk cafes, stalls selling quintessential Portuguese souvenirs, and shops offering international brand names. You can lose yourself in the labyrinth of Porto’s narrow cobbled streets, explore neighborhoods like Miragaia, and relax at Porto’s beaches. I’m not sure who wouldn’t become energized by the city’s buzz, generated, perhaps, by its famous port wine. 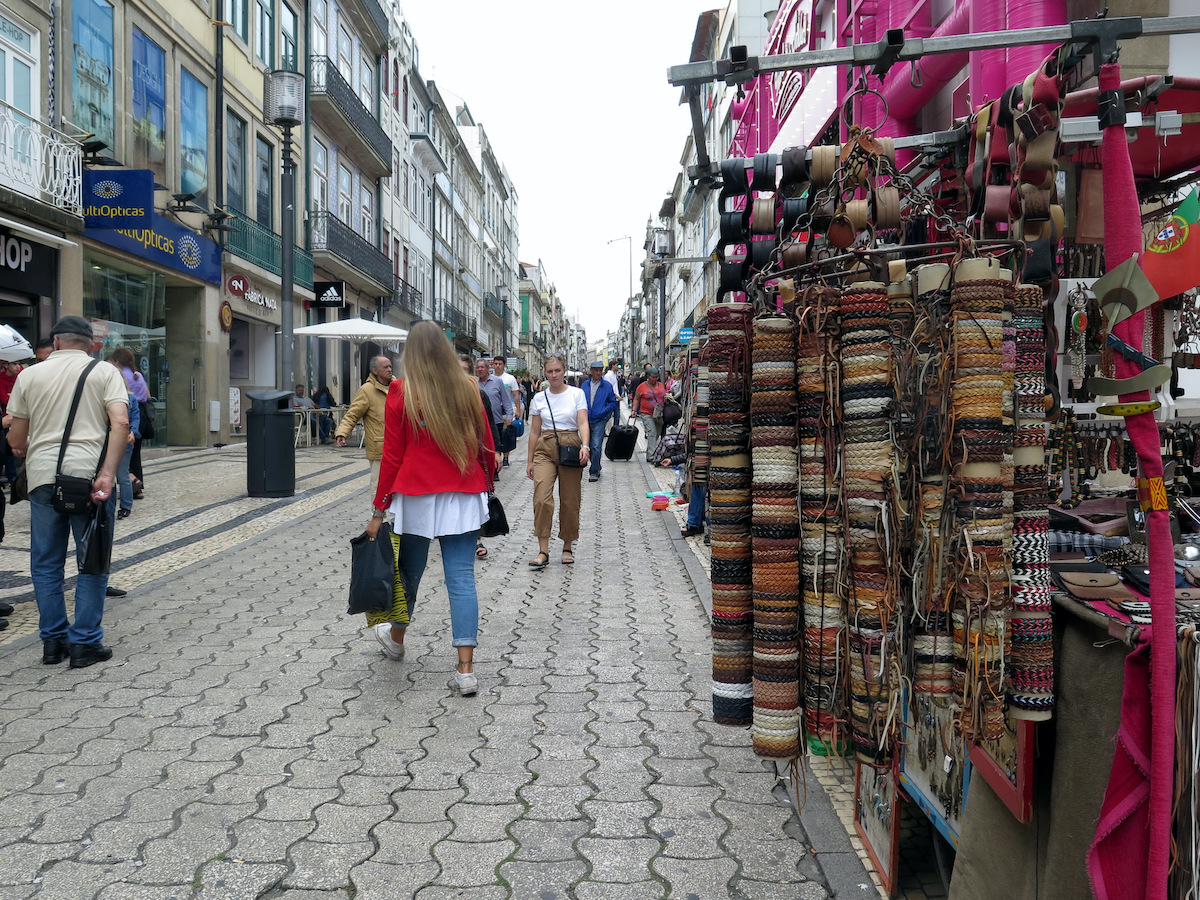 Although port is available everywhere, the most fun way to learn more about this fortified wine is to cross the Douro River via the Ponte Luiz I to Vila Nova de Gaia. Port owes its success to the upper Douro Valley, located about 60 miles upstream, which offers the perfect combination of climate and soil. Although wine has been produced here for more than 2,000 years, it was only after the British arrived that the race was on for full-bodied wines that could travel well to England, with the first shipment of wine under the name “port” recorded in 1678. 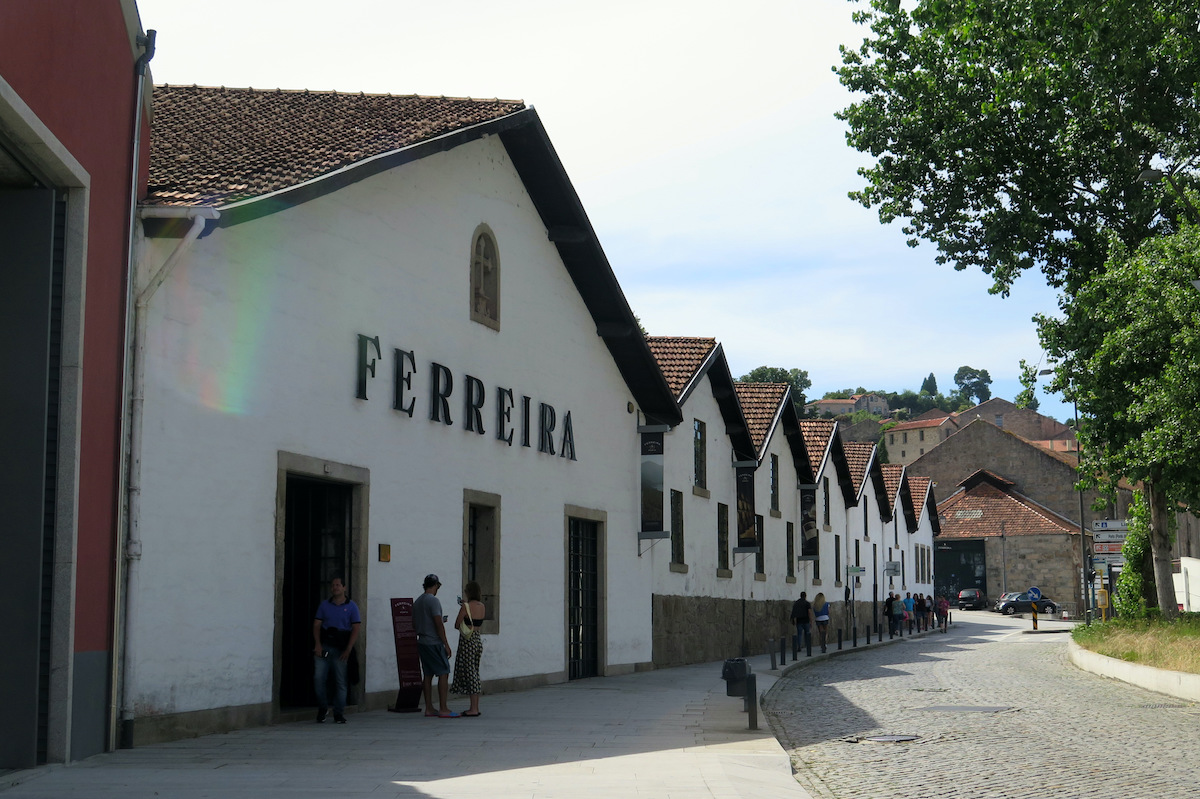 Established in 1751, Ferreira is one of about a dozen wine houses in Vila Nova de Gaia

Some 30 varieties of port grapes are grown in Douro Valley, but they are blended, matured and processed for shipping in Vila Nova de Gaia. About a dozen port houses (called “lodges”) are open to the public for tours and/or tastings, where you’ll learn that port is made by adding brandy to fermenting grape juice, resulting in a drink that is sweeter and stronger than regular wine. Being familiar with red ports, which hold up well with strong cheeses and chocolate, I was surprised to learn that there are actually many varieties, depending on the grapes, whether they’re aged in wooden casks and vats or bottles, for how long, and other factors. There are, for example, tawny dessert ports, aged for long periods in oak casks and sporting an amber “tawny” color. There are even white ports, made from white grapes and served often as an aperitif. All these are ready to drink when bottled, but then there are vintage ports, sought by collectors, which are made from one exceptional harvest and continue to mature in the bottle.

Vila Nova de Gaia, across the Douro River from Porto, is home to port wine lodges and cellars 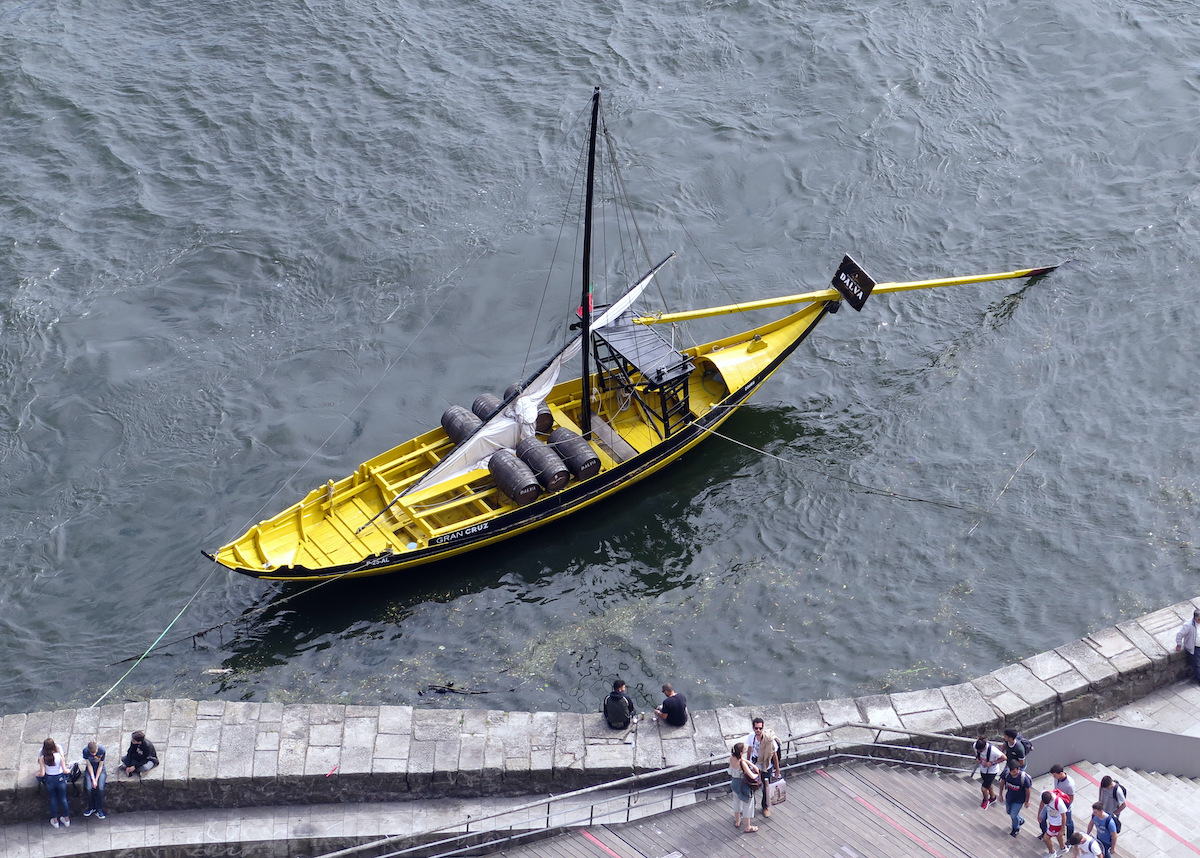 Two of the largest and most well-known port lodges are Sandeman, founded in 1790, and Taylor Fladgate, established in 1692, both of which market their products around the world. Taylor’s is also one of the oldest, still hand picking grapes and treading them by foot. Croft is even older, founded in 1588 and the oldest company still active today as a port wine producer. 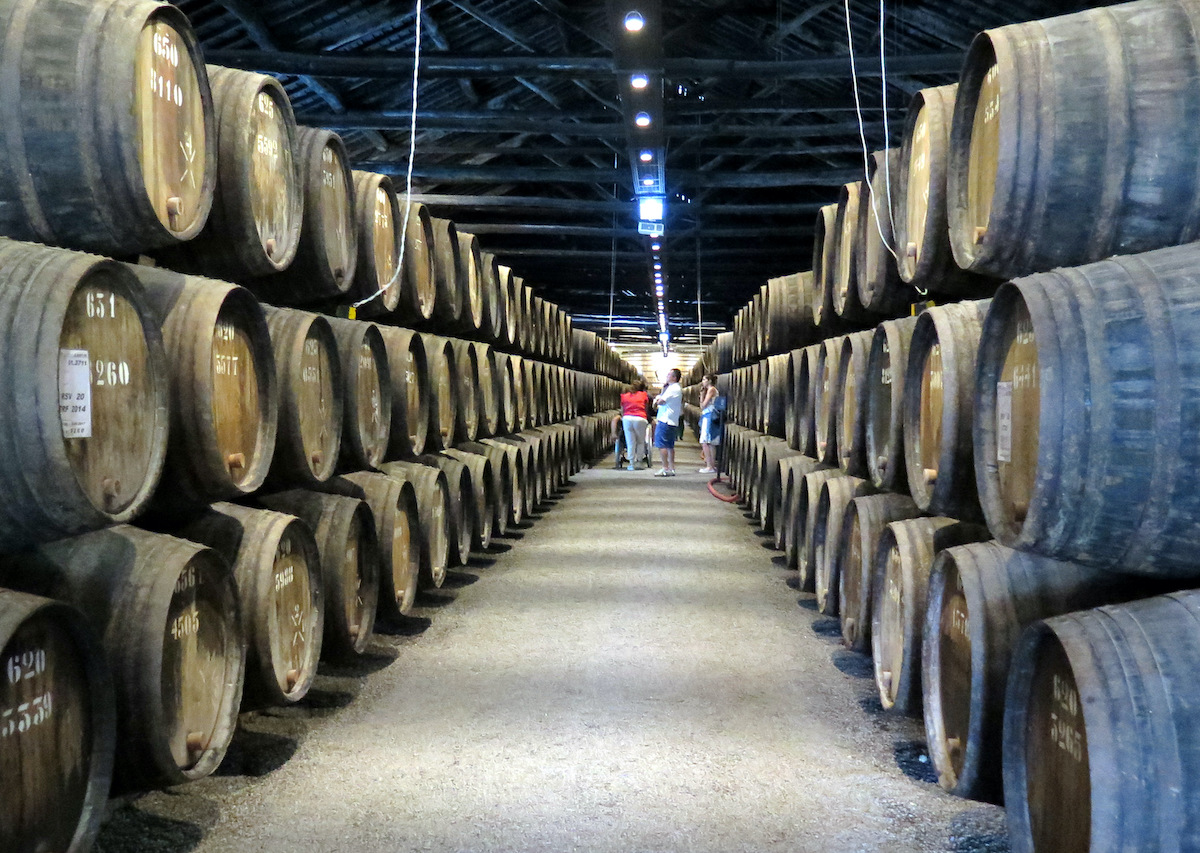 My favorite tour was at Ramos Pinto, which includes a visit to its cellars, museum and former offices, as well as a tasting. It was founded in 1880 by a 21-year-old, who decided that instead of shipping his port to England as all the other companies did, he would export to Brazil, eventually expanding all over South America. It probably didn’t hurt that the company had a rather risqué advertising campaign, namely posters of naked women marketing port as an exuberant and fun lifestyle. Period furniture, a collection of azulejos, “gifts” such as purses and letter openers that were presented to the best customers, and old photographs give this lodge a more personal touch.

After a few glasses of port, it’s easy to fantasize about joining the ranks of visitors who came to Porto and never left. Frankly, why would they? 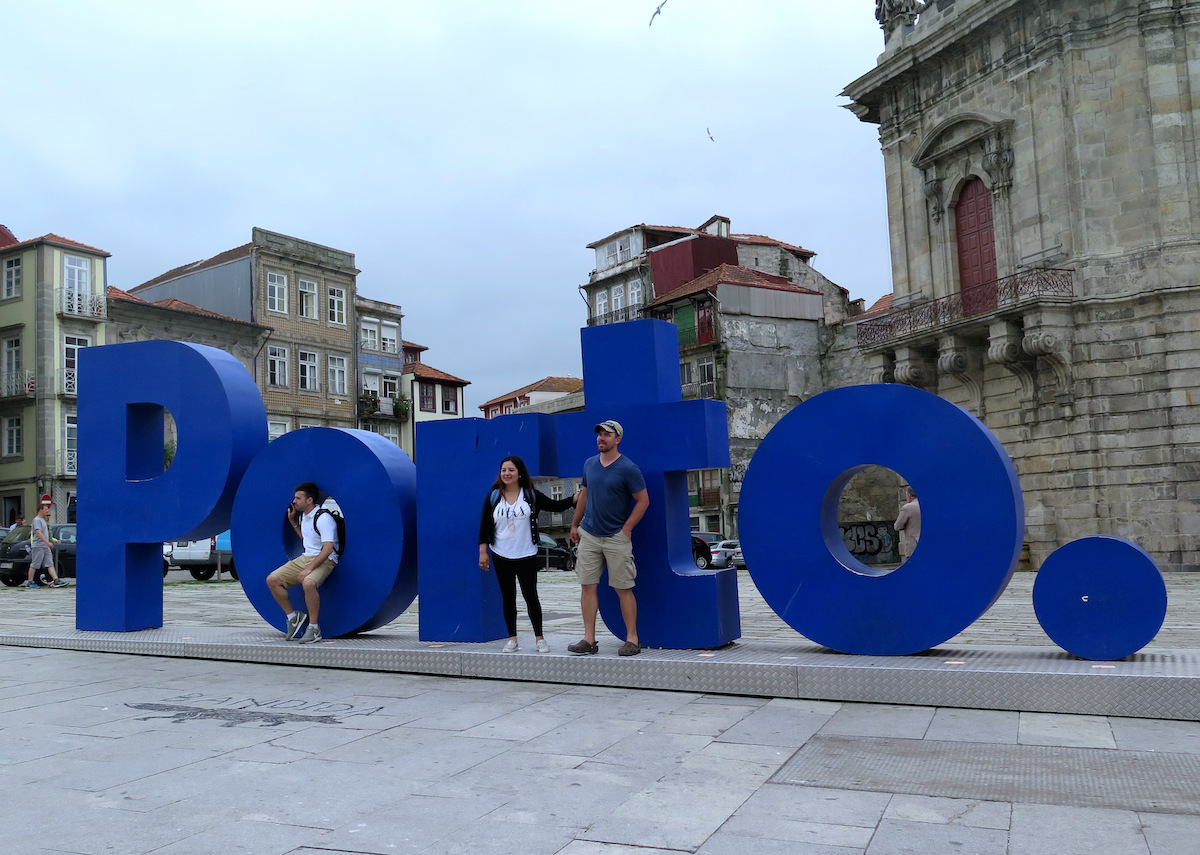 For more on Portugal, see Beth Reiber’s other articles:

Disclosure: Beth Reiber paid for her own travels 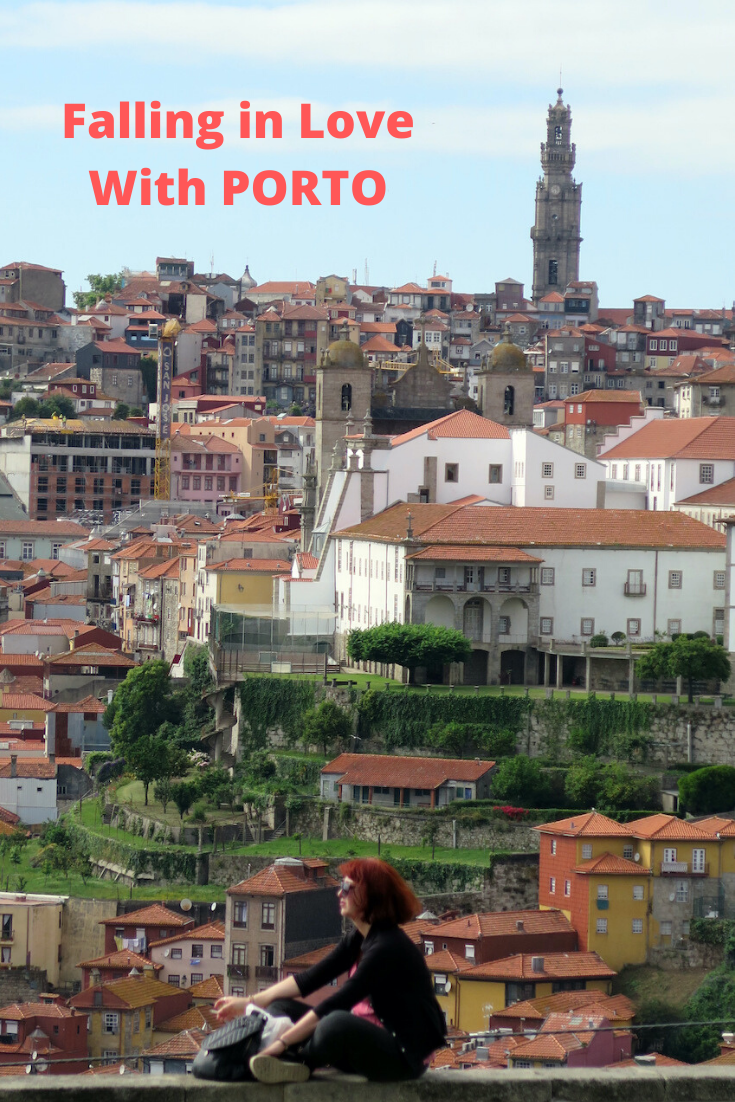