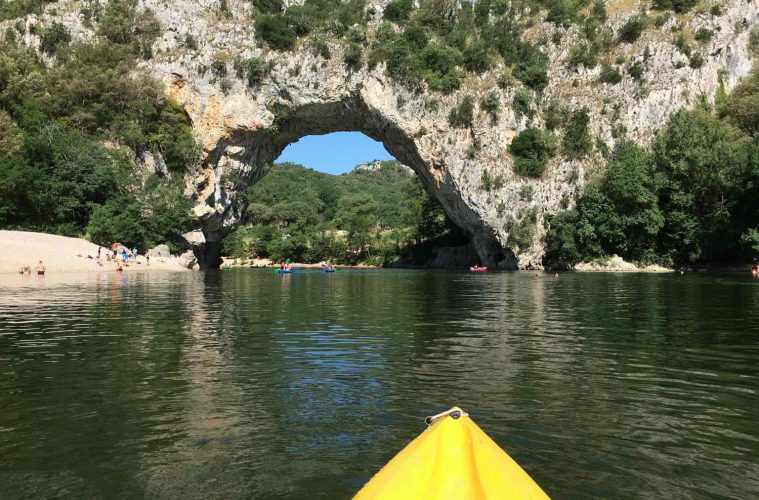 When looking for an active vacation where you can also snap great photos, consider kayaking in southern France. Two bridges — nature-made Pont d’Arc and manmade Pont du Gard — make paddling the rivers here special. Renting a kayak allows one to enjoy the beauty of these impressive ponts (bridges) by paddling beneath them. 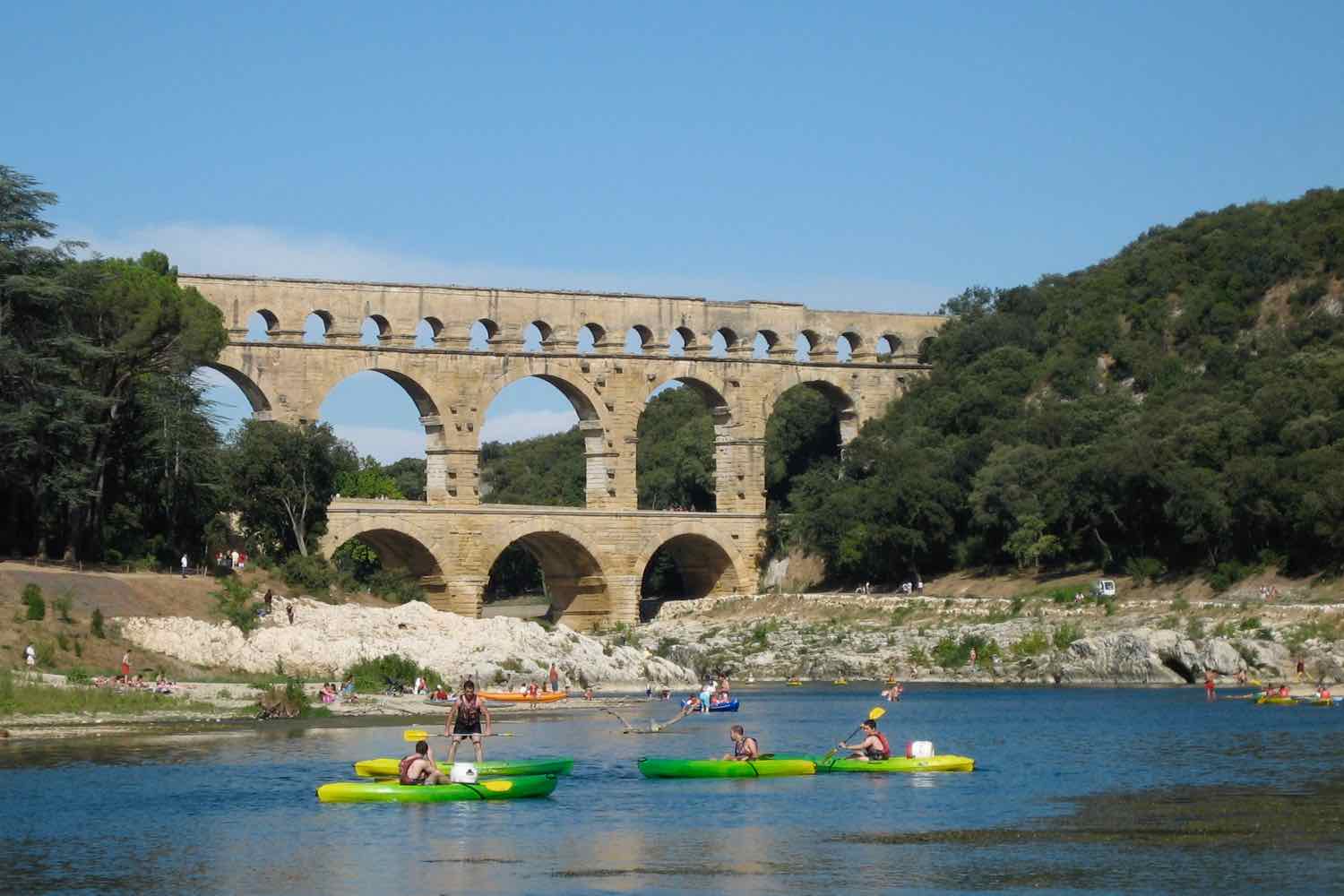 Kayaking in southern France through Pont du Gard is a wonderful way to experience this UNESCO World Heritage site and get great photos of it. (Credit: J. Chung)

The Pont du Gard is located 26 kilometres west of Avignon in Provence. This enormous, 160-foot-high Roman aqueduct, straddling the Gardon river, was built in the first century AD as part of a larger system that carried water from the town of Uzes to Nimes. The aqueduct went into disuse as a supplier of water but was still used as a toll bridge. Today it is still standing and has been named one of UNESCO’s World Heritage sites. It is also a very popular tourist destination with vacationers who hike and do water sports in the area.

The first time I visited the Pont du Gard, I was able to walk across the very top of the pont, but that’s no longer allowed. Not surprising, as there were no safety barriers to prevent visitors from falling off it. A much more enjoyable (and safe) activity is to rent a kayak and paddle down the Gardon river, passing under the Pont du Gard. Many beaches line the shores, and kayakers bring along picnics to make it a full day’s outing. Often the journey begins in the nearby town of Collias. A mini-bus picks up paddlers and takes them back to  Collias.

Pont d’Arc,  a limestone arch located in the Ardèche region, straddles the Ardèche river. This bridge, which is 112 feet high, marks the beginning of the Ardèche canyon. This is another popular holiday spot, and like the Pont du Gard area, many locals and tourists swim, hike, kayak, and canoe here. There are also many spots along the shore where kayakers stop for a picnic. 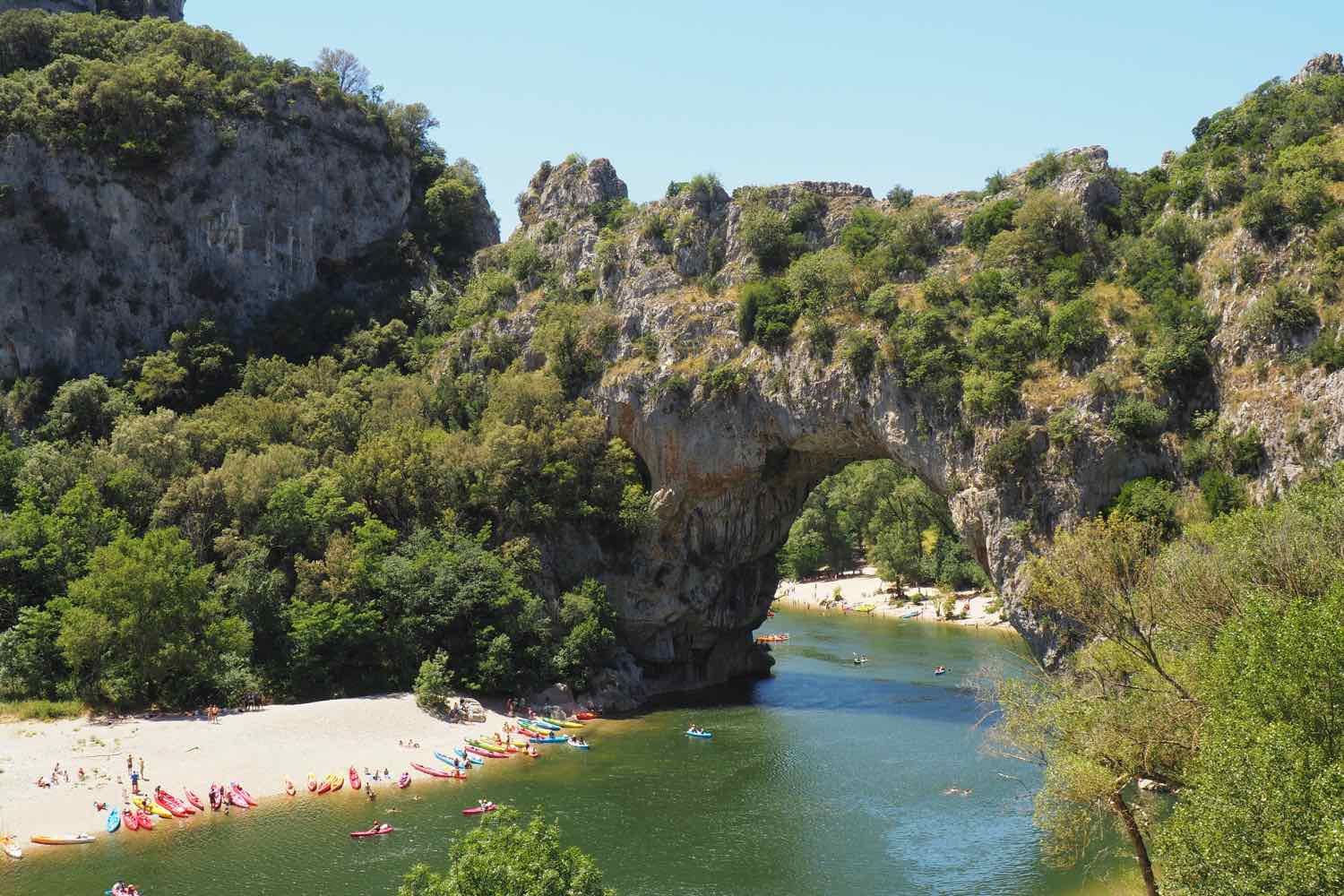 Kayaking lets you get a different perspective when taking photos of Pont d’Arc, a natural bridge at the beginning of Ardèche canyon in southern France. (Credit: J. Chung)

The nearby town of Vallon Pont d’Arc, a small town with numerous restaurants and stores, is the hub. Throughout the area, there are many kayak rental companies that will shuttle you to the start of your journey and pick you up at the end, which is beyond Pont d’Arc. The route passes under the pont. You can choose to travel for 8-32 kilometres. I chose 8 kilometres (about 20 Euros). It was just perfect, as it only took me 1.5 hours to do the route.

When I kayaked at the Pont du Gard, my friend and I chose a double kayak. At Pont d’Arc, I opted for a single kayak. Rentals include paddles, life jackets, and a waterproof container for your possessions and picnic supplies. There are various routes, distances, and durations. I’ve always chosen the 8-kilometer route: twice at the Pont du Gard and once at Pont d’Arc. It was up to me to decide how long I would take. The slow, leisurely ride with stops for photos, swimming, and a picnic can make it a whole day’s outing 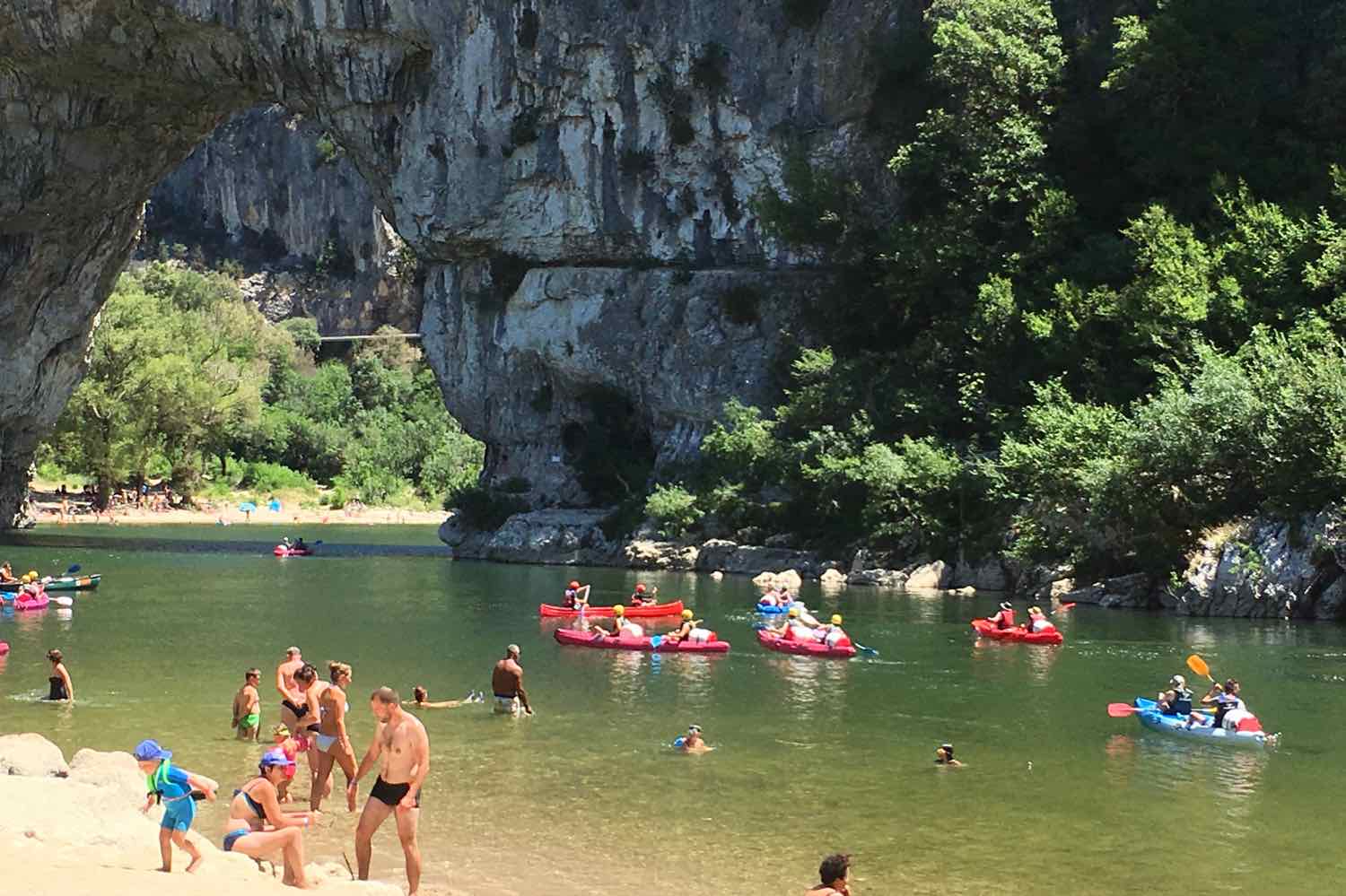 The scenery for both kayaking experiences is truly breathtaking because of the cliffs and the interesting rock formations. While you will want to take photos, you won’t be able to pull out your camera from your waterproof container when you are in the middle of the river. The container is secured with strong straps; maneuvering it out would be impossible.

The scenery for both kayaking experiences is truly breathtaking because of the cliffs and the interesting rock formations.

Do NOT keep your camera out when you are kayaking, as there is a very high probability that you will be splashed or have water suddenly come into your kayak. Better alternatives are to take your photos while on shore, and/or put your smartphone in a waterproof case and keep it attached to you. When there’s a calm, quiet moment during your paddling, you can take a break, pull out your phone and take some pictures. I did it this way and it worked beautifully.

What to expect when kayaking in southern France

So, what’s it like to paddle a kayak in southern France? Most of the route at either location had fairly calm waters; however, there were a few fast spots. I wouldn’t call them rapids, but the water moved very quickly and I had to be sharp and act quickly with my paddle to avoid rocks or bigger drops. I used a lot of shoulder power during these sections, pushing my paddle against the rock so I would not spin around. I wasn’t scared, but I had to be on my toes to anticipate rough waters.

When the water was calm, it was heaven. I could pull out my iPhone and take lots of photos and videos. That’s what was nice about the journey. It was up to me if I wanted to move on or go onto the shore.

Be sure to get the whole scoop about Janice Chung’s adventures kayaking in southern France on France Travel Tips.