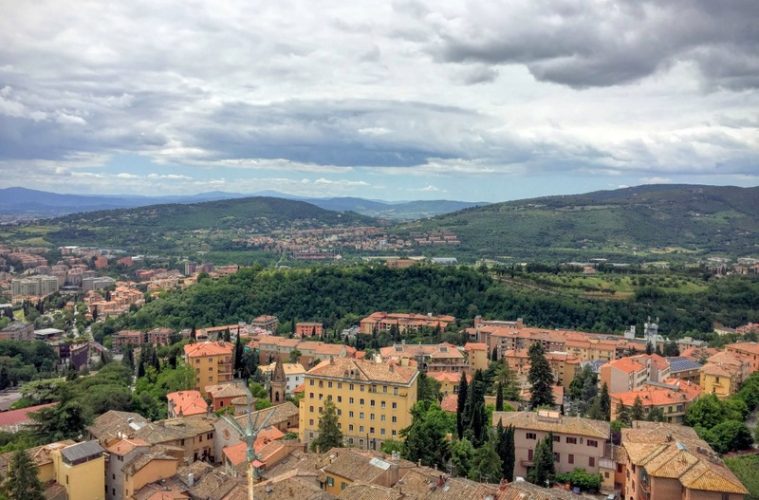 Perugia in a Day: With a Little Help From Our Friends

The major cities in Italy, ones that teem with layers of art, history and culture dating back centuries, consistently attract the greatest number of foreign tourists. (In case you are curious, in terms of population, Milan ranks number one, followed by Naples, Rome, Turin, Venice-Padua, and Florence.)

However, as you go further down the list, you may hear tourists refer to one place or another as a one-day city, usually a term of disparagement that infers that a city’s major attractions (whether they’re churches, museums, monuments or other cultural treasures) are so limited you can probably see them all in a day – or less. Pisa is one of many underrated cities in Italy that bears that cross. 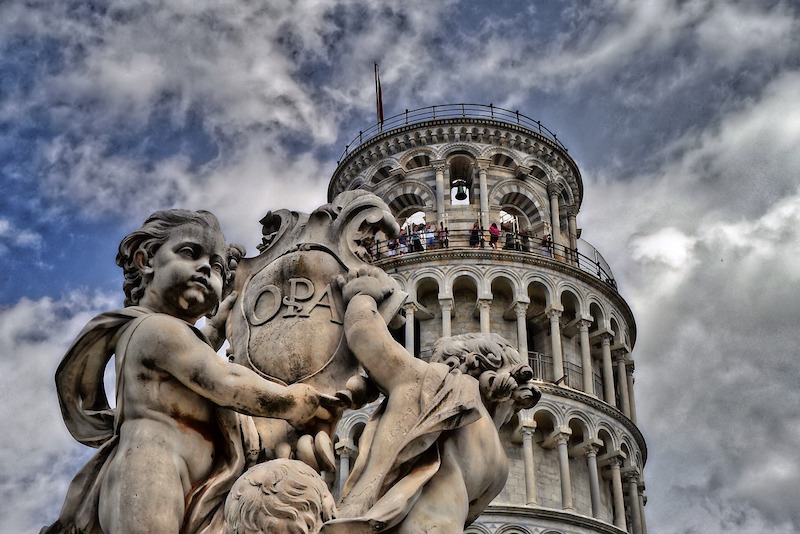 Most travelers realize that truly grasping the rhythms of any destination, and beginning to understand the customs and lifestyle of its people, is quite difficult, if not impossible, to achieve in one day – whether you’re visiting Pisa or anywhere else. A one-day trip only allows you to skim the surface.

But what if you truly only have one day to see a city? That happens often when traveling. Perhaps, you’re on your way to or from somewhere else (e.g. an ocean cruise or riverboat voyage) or already have all your other days accounted for.

How can you enhance your ability to discover some of a destination’s hidden charms, in addition to those you may have read about?

Finding someone to help curate your day and arrange the logistics can save time and enhance your experience.

Getting the lay of the land

This was the case when we recently planned a two-week trip to Umbria and Tuscany with two other couples. We were getting into the vacation mood, gathered around a table at home over a bottle of Chianti with our friends, for a “pre-trip planning meeting.”

Creating an itinerary when traveling with a group, generally a process of negotiation, can be daunting. One person’s been there, another has no interest and another wants to go somewhere else.

The VRBO rental villa where we were staying for our first week in Italy, called Cappella Di Pancole, was located in the hill town of Castelnuovo Berardenga, about 50 miles from Florence and 10 miles from Siena. Of course, we planned visits to both anchoring towns but we also wanted to dip our toes into the neighboring region of Umbria.

We pinpointed the location of our villa on Google Maps and drew a wide circle to see where else we could visit. All of us quickly agreed on one thing: We love Italian chocolates. So we decided to visit Perugia, the capital city of Umbria, only about one hour away. This university town, known for its art and culture, is also the home of Baci® Perugina® chocolates.

Fuoritinerario: Off the beaten path

Fuoritinerario: Discover Your Italy is a boutique tour company owned by Matteo Della Grazia and his wife, Daniela Mencarelli. A friend in the travel industry introduced us to the couple who arrange bespoke, individual and small group experiences throughout Italy, enabling visitors to “discover Italy,” based on their personal passions. 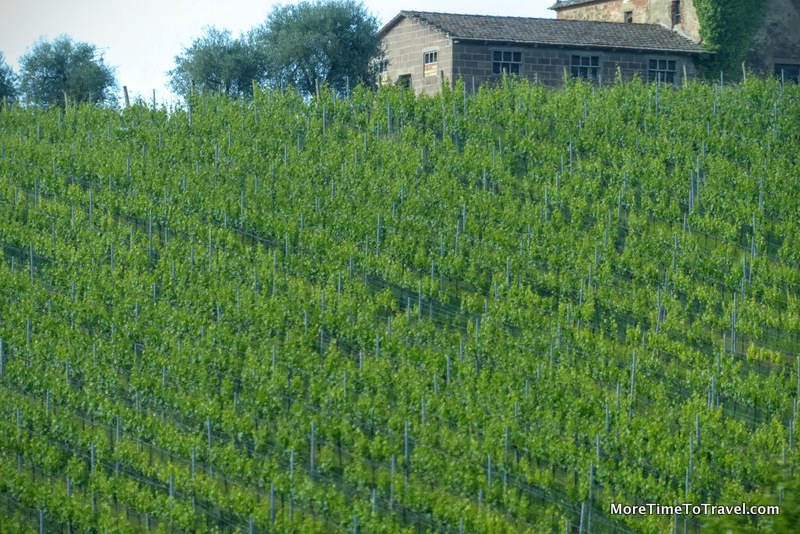 Vineyards along the road to Perugia 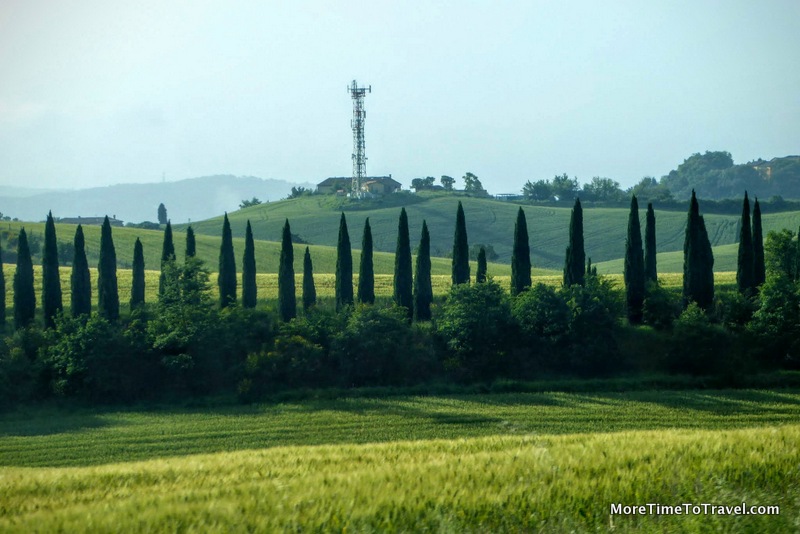 Row of cypress trees on the way to Perugia

Matteo responded quickly after we emailed him, and offered to help plan a day in Perugia to our specifications. He asked where we were staying, whether we needed transportation, and threw out some ideas to gauge the interests of our group – beyond chocolate.

Among a rather exhaustive list of choices, we could have met with local cheese producers; visited a workshop that makes stained glass windows for churches; and visited Lake Trasimeno, the largest lake in Central Italy, by boat.

Our group conferred (over Chianti again), this time in an Italian restaurant in Manhattan, and chose three experiences for our upcoming visit. Matteo surprised us with four!

Perugia in a day

Our villa was located off a winding, dirt road about 15 minutes from the paved road leading to the highway. With Google Maps in hand, we piled into our rental van to meet Matteo and Daniela at a point halfway between our villa and Perugia: the convenient-to-park-at Valdichiana Outlet Village at 9 am, before the onslaught of bargain hunters. 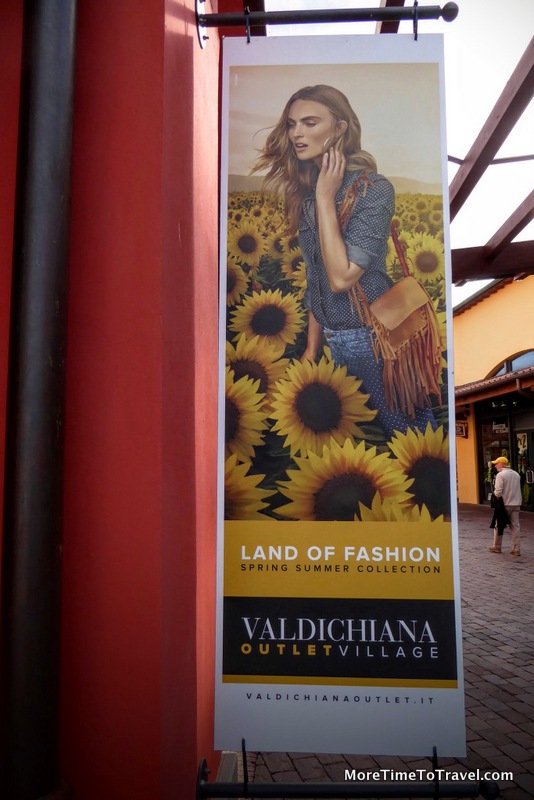 During the ride in his comfortable air-conditioned van from the outlet mall to Perugia, Matteo briefed us on the history of the city and its Etruscan roots, proudly telling us about the university founded here in 1308, and pointing out the rich agricultural bounty beyond the highway. My fashionista girlfriends were impressed to hear that iconic Italian companies like Luisa Spagnoli, Brunello Cucinelli and Ellesse were founded here, too.

Stop 1 – Weaving our way through Perugia

Before we knew it, Matteo was pulling into a spot in the parking lot beside the first Franciscan church in Perugia (the Church of San Francesco delle Donne), established more than 800 years ago in 1212. Matteo showed us the demarcation on the medieval church walls, separating the portion of the structure that dated to the Etruscan period. 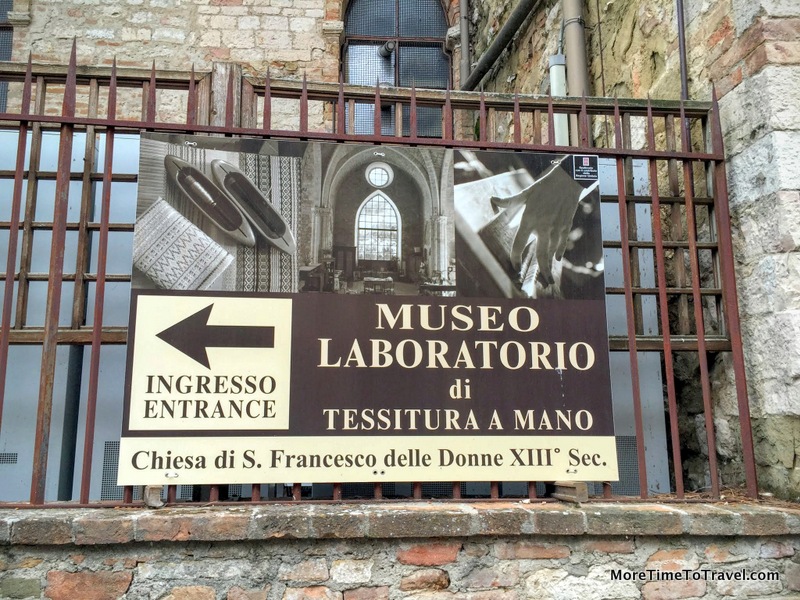 Entrance to the museum and workshop

Marta Cucchia, the jocular woman who runs the Museo-Laboratorio di Tessitura a Mano Giuditta Brozzetti greeted us inside and showed us around. In this hybrid workshop/museum, artisans use century-old techniques on antique wooden looms to create elaborately patterned textiles. The oldest loom in the space had been in use since the 18th century. 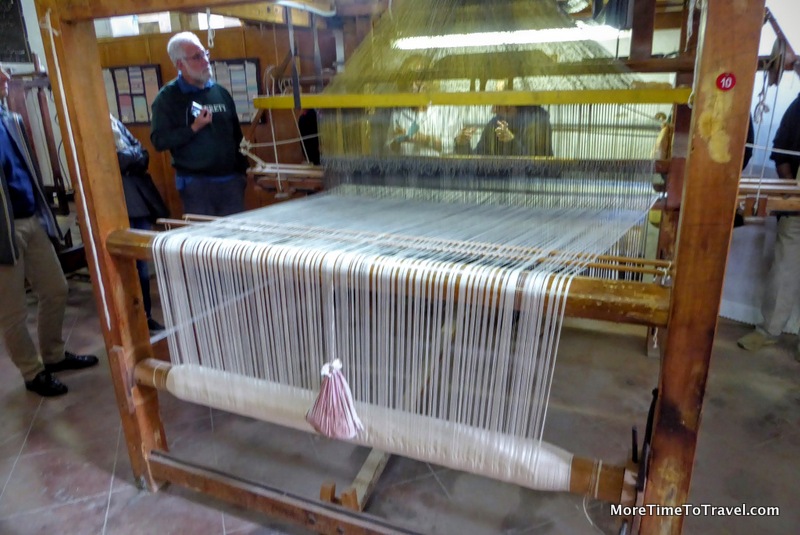 One of the old wooden looms at the workshop in Perugia 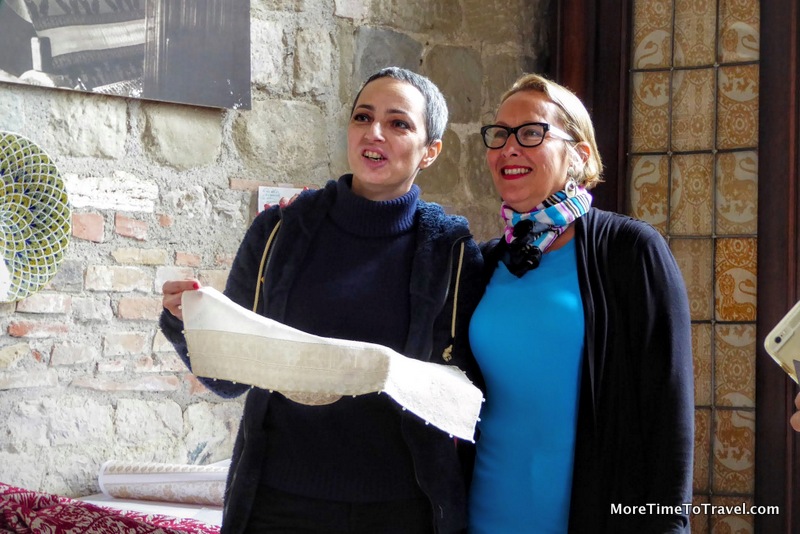 We learned that Umbrian textiles come in over 200 intricate patterns; it takes 20 days to complete a tablecloth for 12. The fabrics are so magnificent that they are displayed in the National Art Gallery of Umbria. 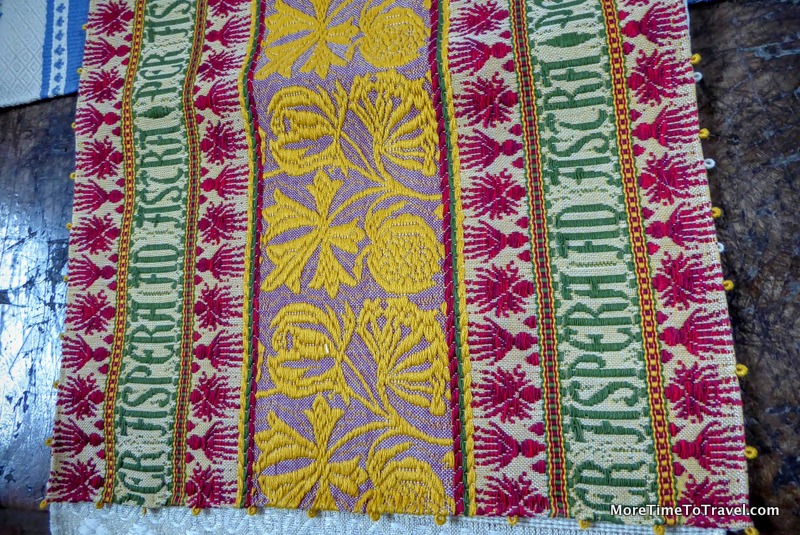 Sadly though, we were told that this time-honored craft is a dying tradition. Marta’s grandmother, Giuditta Brozzetti, once managed a crew of 20-30 weavers; now only a few older women still work the looms. 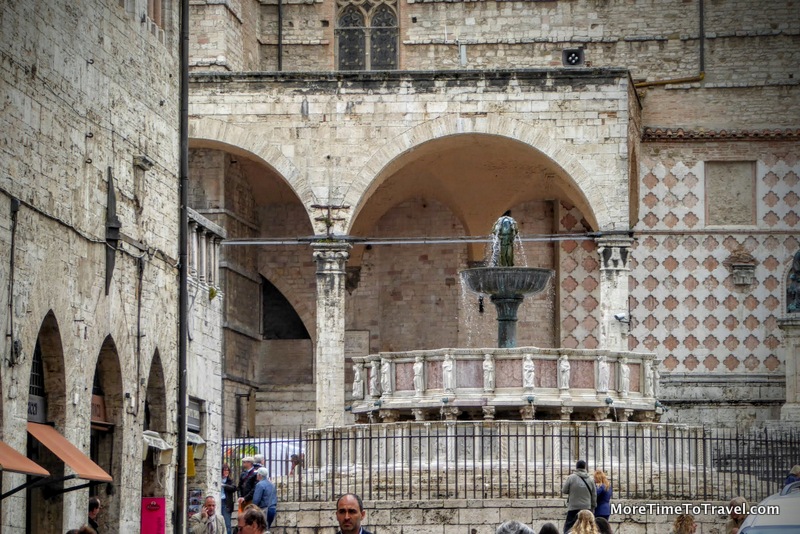 Stop 2 – Up close with some of Perugia’s art treasures

We’ve visited museums around the world in New York and while traveling, sometimes with guides or audio tours. But this time, Matteo raised the bar.

He told us that he arranged for our group to have a private tour of the National Art Gallery with Marco Pierini, its new director. Patiently, Director Pierini walked us through the beautifully displayed installations explaining his favorites. They included frescoes, crucifixes and altarpieces (some dating back to the 13th century) and the museum’s “newer” acquisitions, paintings of Italian masters of the medieval and Renaissance periods (including Perugino and Fra Angelico). 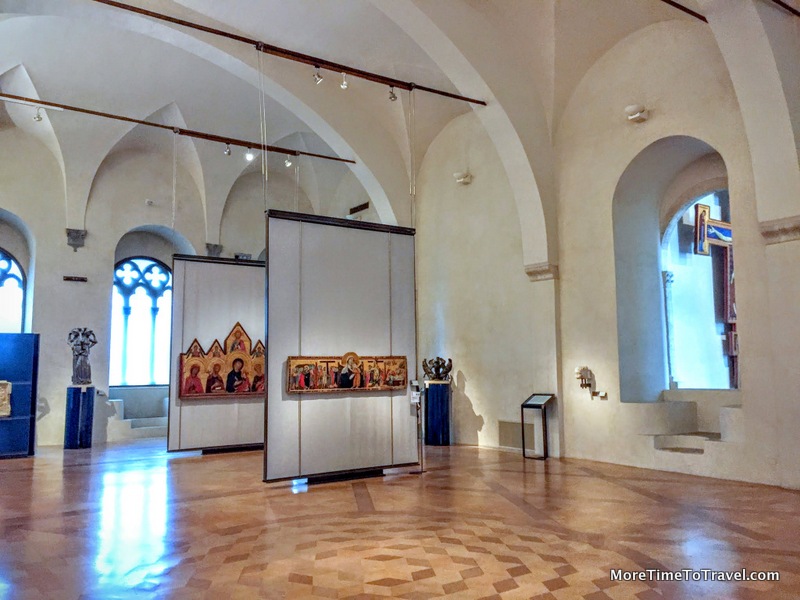 Modern exhibit hall at the National Art Gallery of Umbria 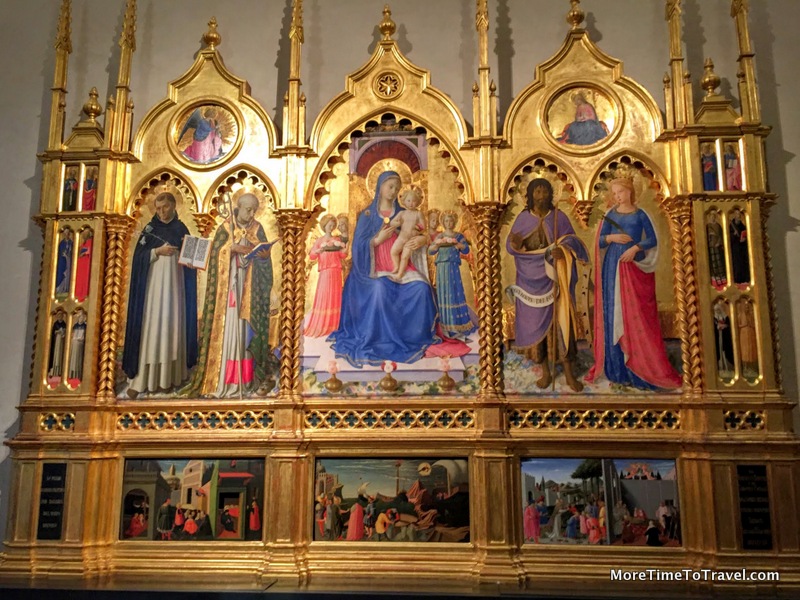 Altar panel at the National Art Gallery of Umbria

Granted, the collection isn’t as impressive as that in Florence’s Uffizi Gallery but the experience was far more personal and without the crowds and queues.

There were once 70 towers in Perugia, a symbol of its strength and status. Now only the 13th century Sciri Tower (Torre degli Sciri) remains. Undergoing renovation since 2011, it still hadn’t been opened to the public when we visited. 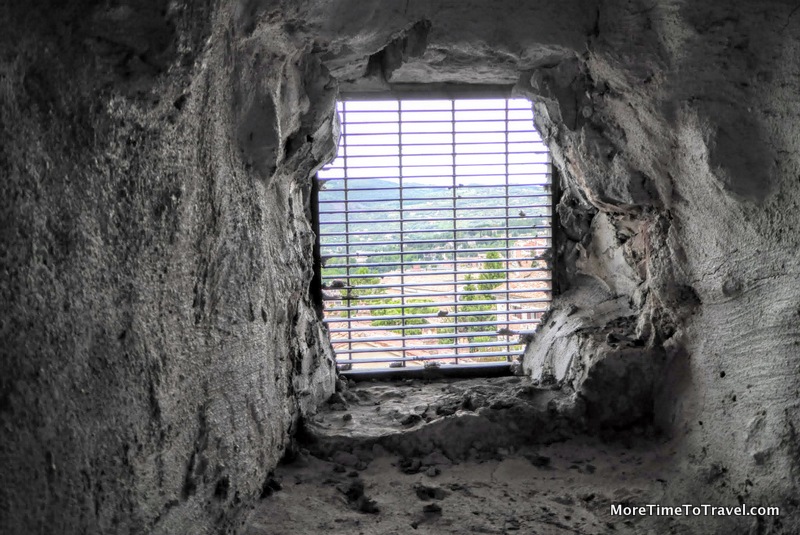 View on the way up the Sciri Tower

Somehow, Matteo had the connections to get the keys to the tower. Following him and a colleague, we scaled the dark narrow steps to the top single-file, wondering if it would be worth the effort. We weren’t disappointed. From this perch, we saw expansive views of Perugia and the surrounding countryside. 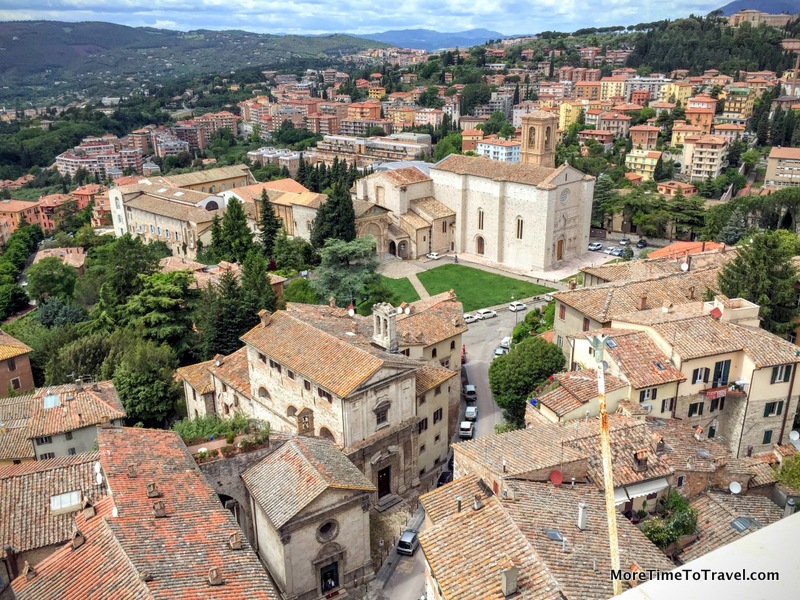 Perugia from the Sciri Tower

After we slowly descended, there was another surprise: At the church at the bottom, proud locals had set up a light lunch with wines for Matteo’s visitors. 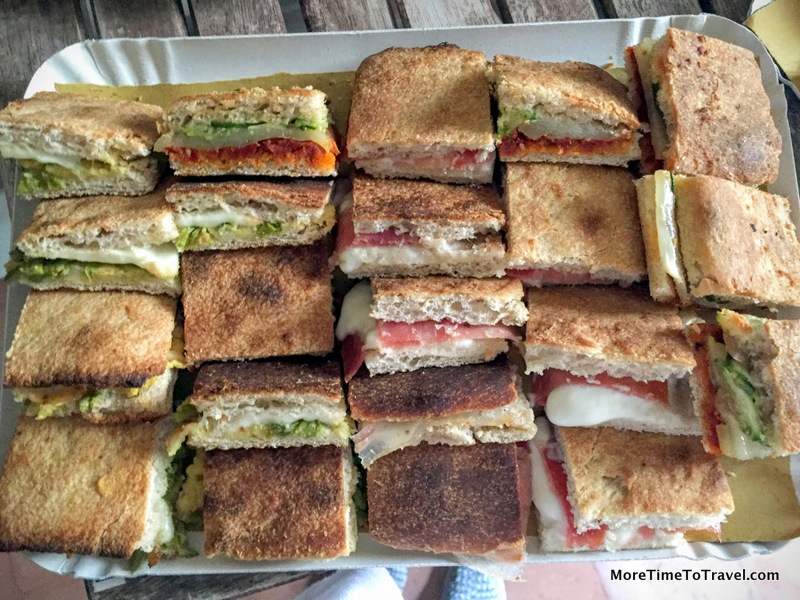 Panini lunch in the church

Many Americans (and some Italians, too) know Perugia as the home of Perugina®, maker of Baci® (which, in Italian, means kiss) chocolates. These are highly addictive chocolate truffles laced with hazelnuts, wrapped in silver and blue, with a love note inside. Perugia also hosts a chocolate festival every October. 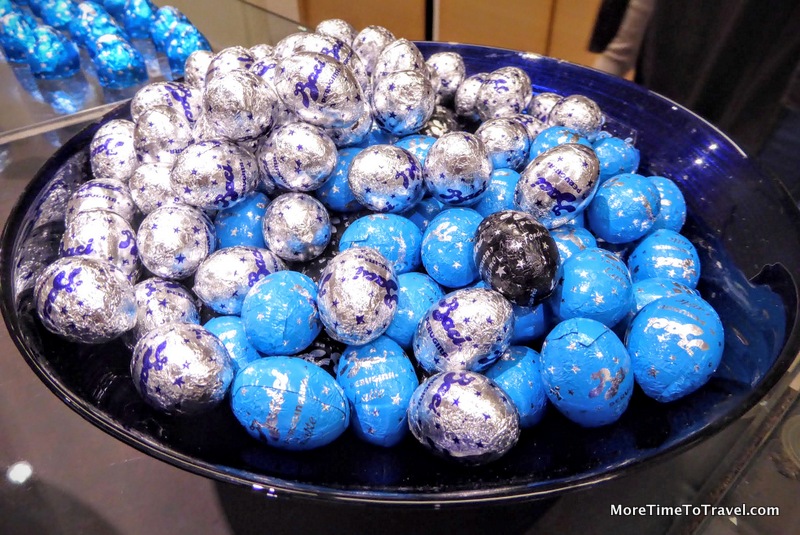 A tempting bowl of Baci chocolates. The factory produces 1.5 million of these a day!

At our last stop at the Perugina Casa del Cioccolato (the chocolate factory), we were able to skip the lines because Matteo had prearranged entry. Tempting smells of chocolate wafted through the air as we watched an introductory video, took a guided tour of the museum and factory, and were treated to long-awaited, unlimited samples of Baci® chocolates in different varieties. We even stuffed a few in our pockets for the ride back to the Valdichiana Outlet Village.

Every time we eat a Baci® now, we’ll reminisce about our visit to Perugia and getting to know our friends, Matteo and Daniela. 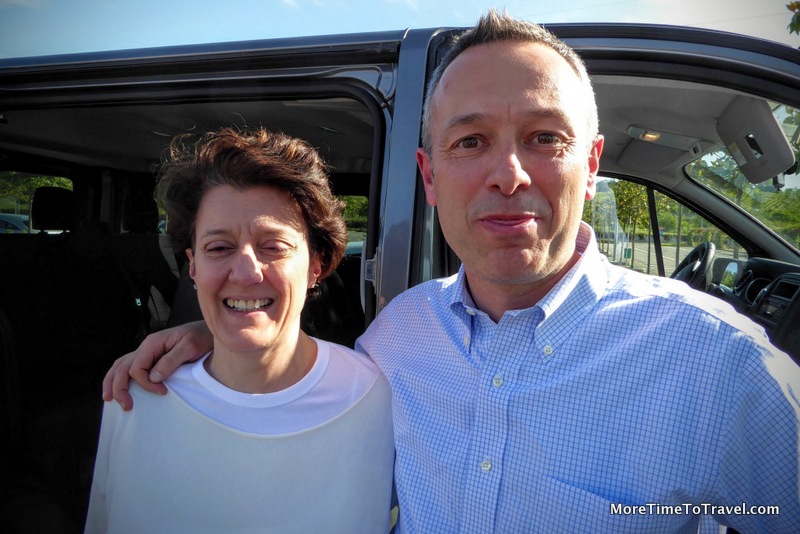 Saying “ciao” to Daniela and Matteo

*All photo credits: Jerome Levine (except for Pisa photo)

The author’s tour of Perugia was hosted by Fuoritinerario: Discover Your Italy. 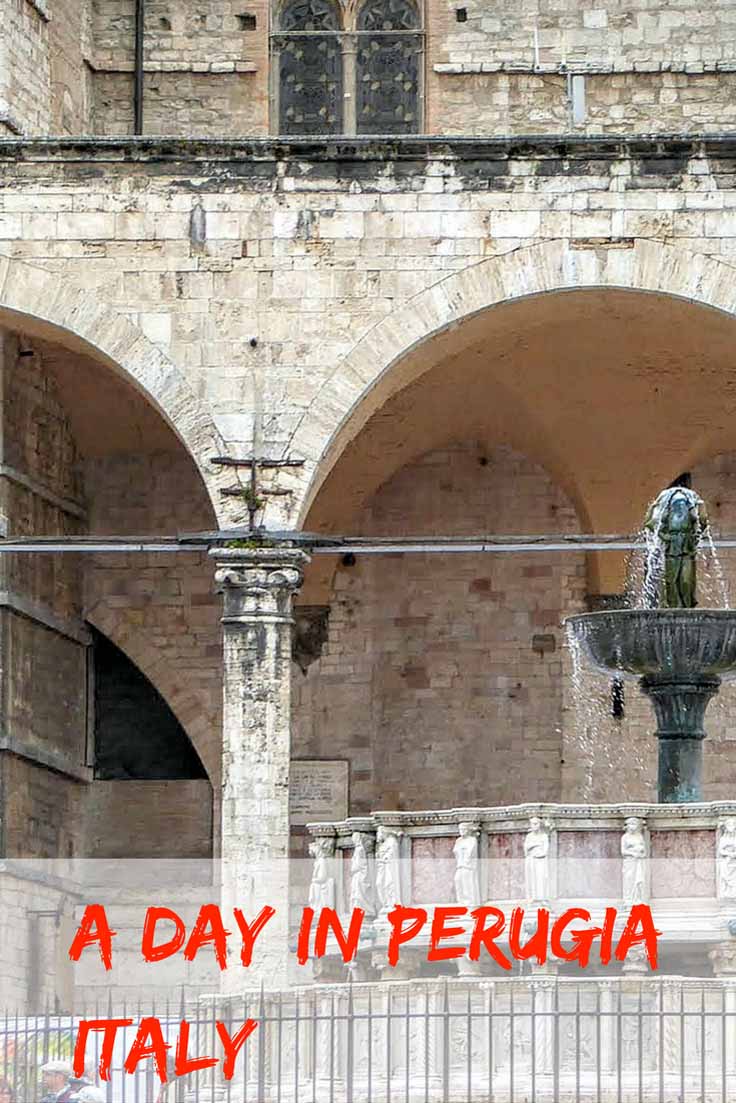