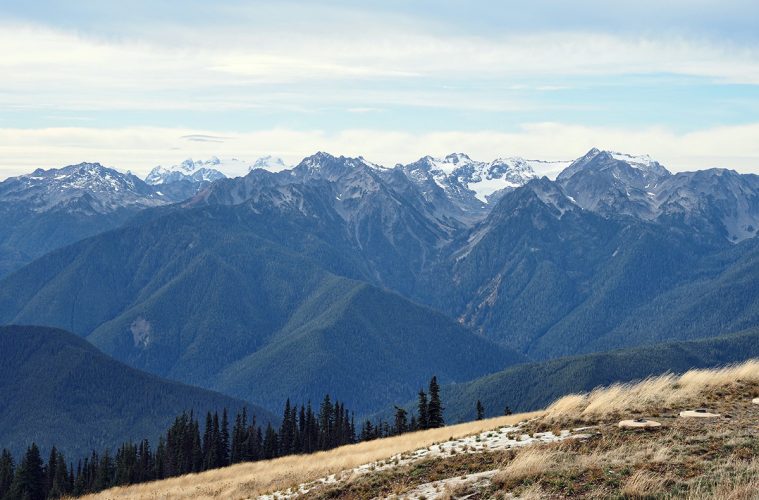 Olympic National Park: What To See And Do

Outdoor spaces are more popular than ever with travelers of all ages, including America’s 423 national parks. After spending four nights in Washington state’s Olympic National Park last fall, I can enthusiastically recommend this spectacular park to others. It’s easy to see why it welcomed some 2.5 million visitors in 2021.

After flying into Seattle’s Sea-Tac airport and picking up a rental car, a fellow travel writer and I followed Highway 101 on a route around the peninsula, covering nearly 500 miles. 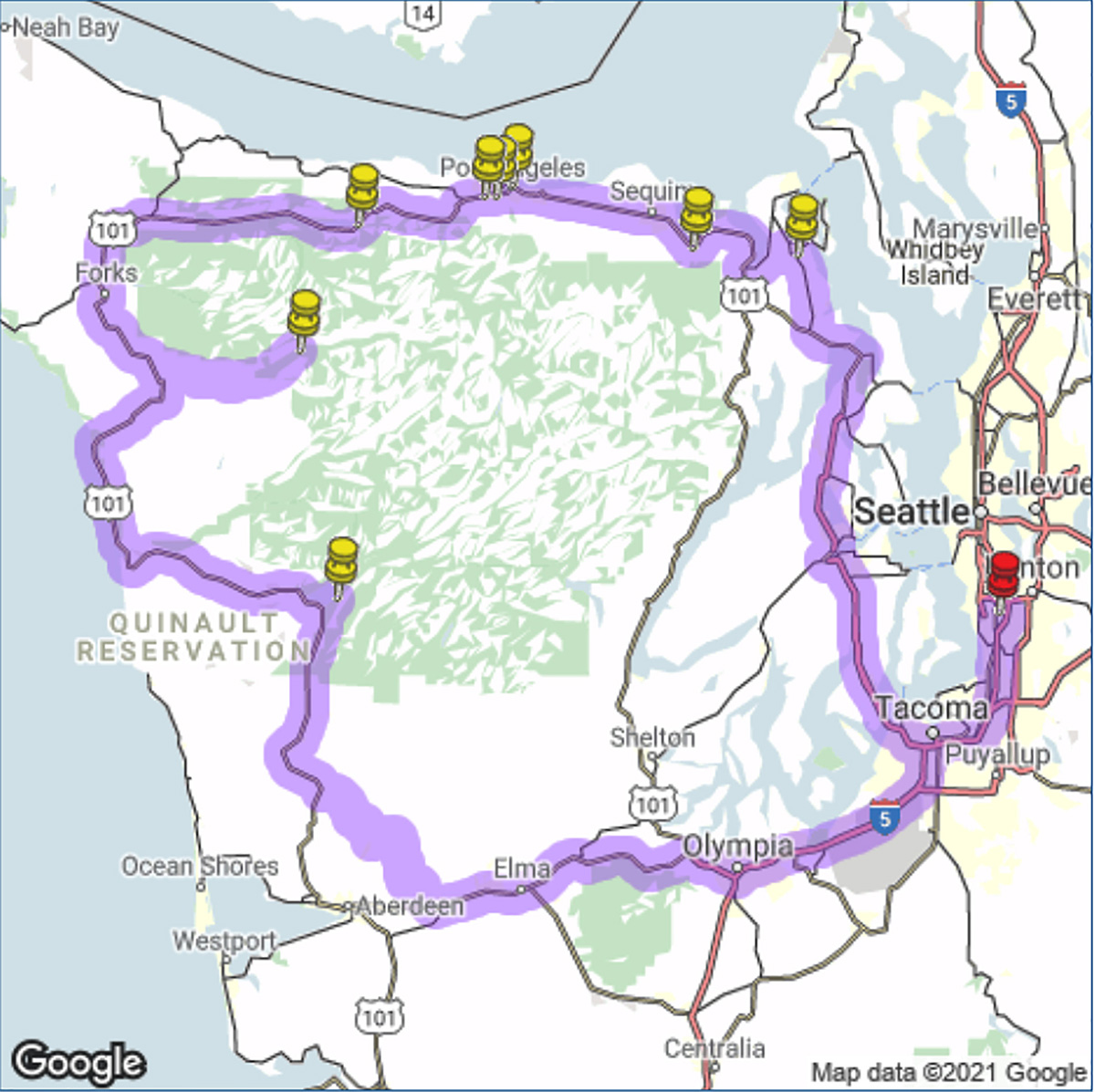 The route we took on our trip through the Olympic National Park. (Google Maps)

First, here are some “fast facts” about the park, which makes up the majority of Washington’s Olympic Peninsula.

WHAT TO SEE & DO AT OLYMPIC NATIONAL PARK

Search for Sasquatch in the Hoh Rainforest 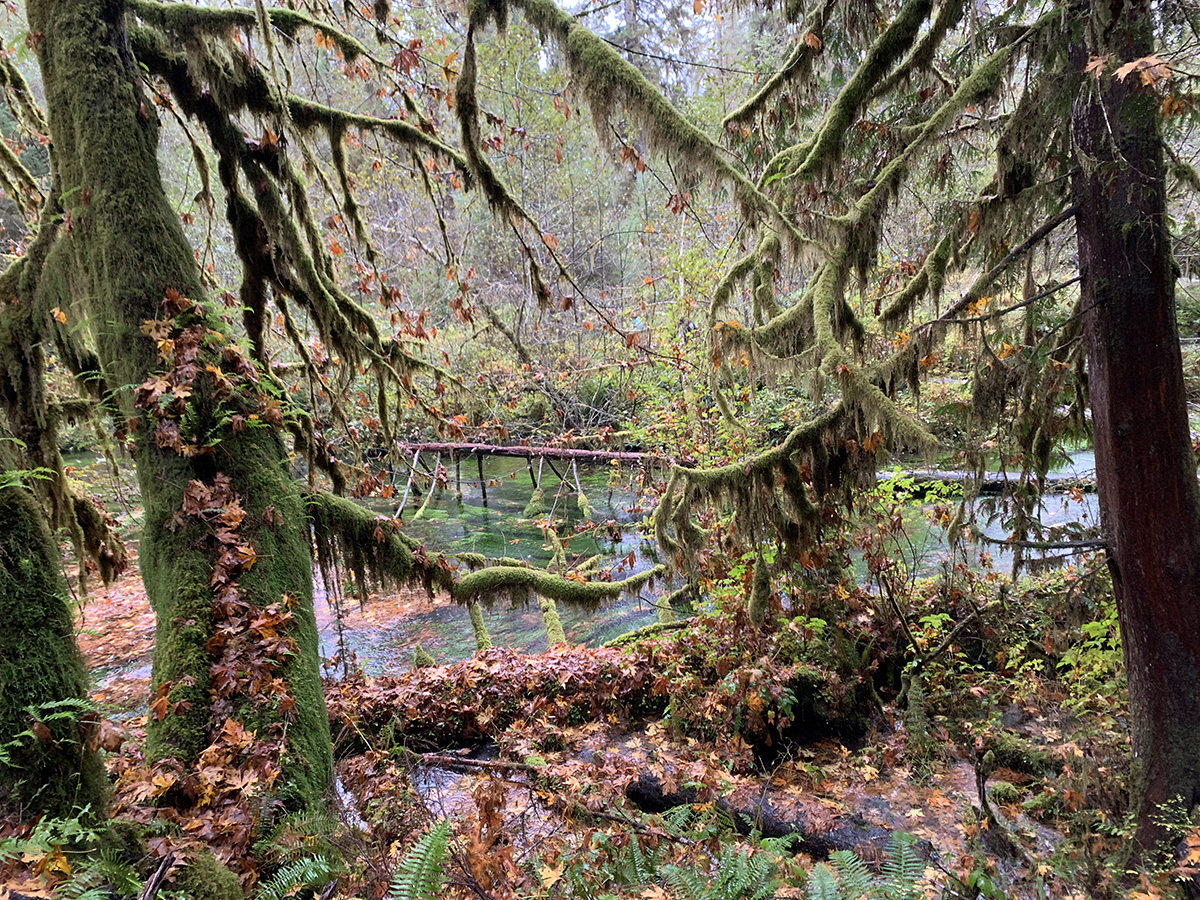 Hoh Rainforest on the Hall of Mosses trail.

Primeval, ethereal, and otherworldly are words that perfectly describe parts of Olympic National Park’s forested area. You may feel as if a Sasquatch may cross your path in the Hoh rainforest, and those who actively search for Bigfoot would agree. A group of scientists, biologists and researchers formed The Olympic Project to learn more about the creatures. They also lead expeditions in the forest.

My travel companion and I didn’t experience a Big Foot sighting, but the Hoh Rainforest, one of the largest temperate rainforests in the U.S., would be the ideal setting to see one. The Hall of Mosses Trail, less than a mile long, led us through groves of giant ferns and towering old-growth trees and under a canopy of draping mosses and lichen hung from tree limbs. Do not miss it if you go! 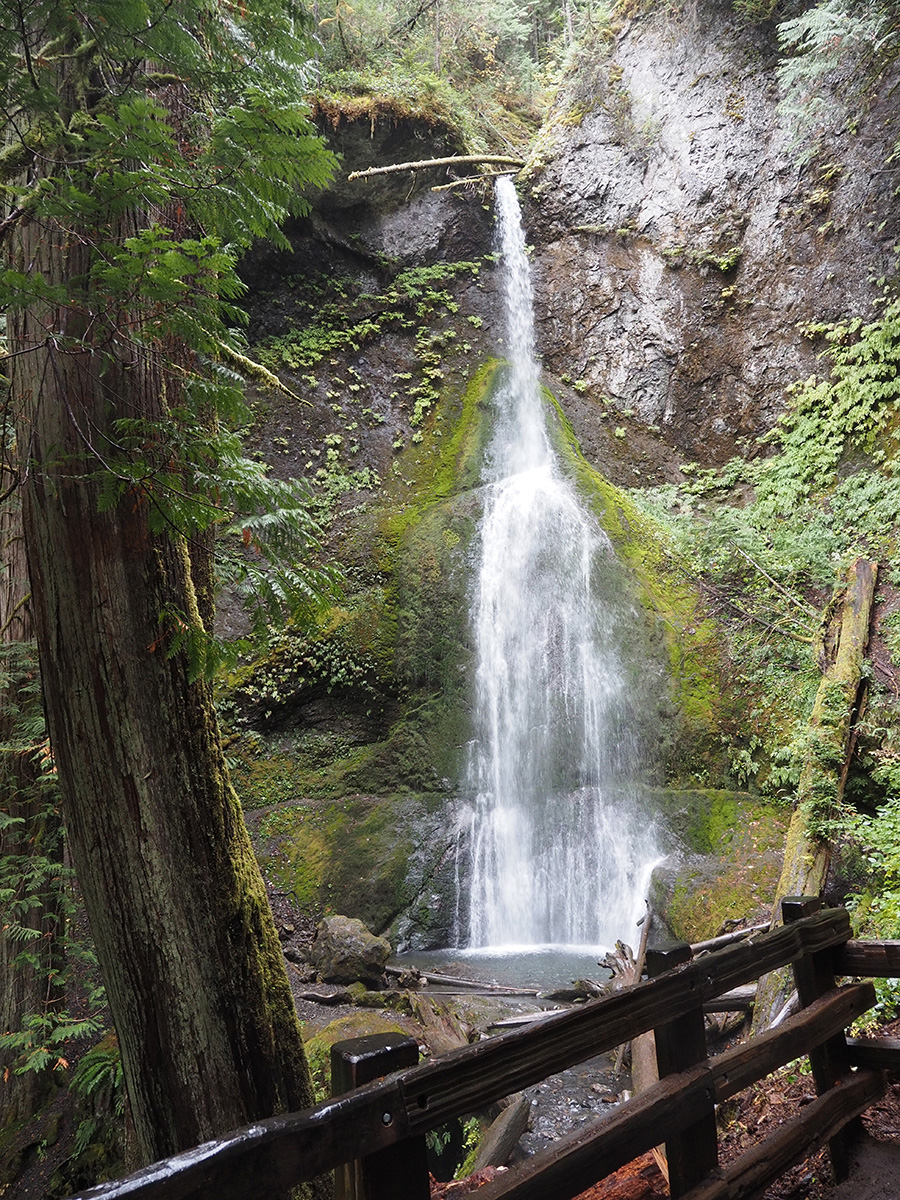 Marymere Falls near Lake Crescent Lodge is on the Olympic Peninsula Waterfall Trail.

We made it to two of them. The first was to the 90-foot Marymere Falls. We followed a scenic trail from behind Lake Crescent Lodge, our accommodation for the first two nights, through an old-growth forest of fir, cedar, hemlock, and elder trees to reach it. We walked past fields of huge ferns, across bridges, and up a winding path to an elevated platform to view the Falls, which flow into Barnes Creek.

While staying at Lake Quinault Lodge, we hiked a portion of the four-mile Quinault Loop trail, locally known as the Rain Forest Nature Trail. Our goal was to reach Cascade Falls, named for its cascading feature as it flows downstream into Falls Creek.

Sol Duc Falls, considered to be the signature waterfall of Olympic National Park, is near Sol Duc Hot Springs Resort, which offers guests access to several natural hot mineral pools. Since this resort closes in mid-October, we missed being able to stay here and soak in these natural “hot tubs.” 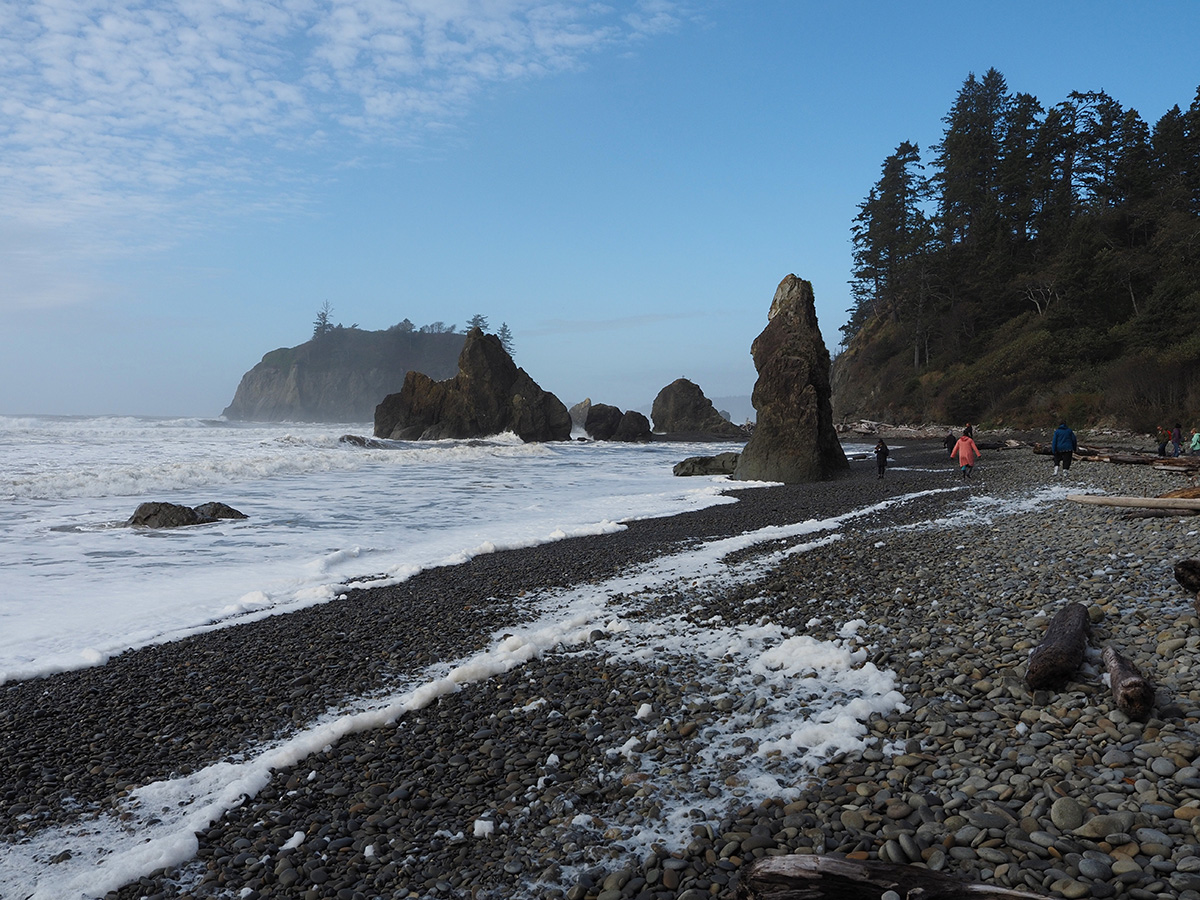 Ruby Beach is among the most beautiful beaches along 70 miles of coastline in the Olympic Peninsula.

The only beach we had time to visit was Ruby Beach, one of the most photographed and starkly beautiful beaches on the peninsula. It is so named for the reddish, ruby-like granules that appear in the sand. Be sure to take in views from the road as you approach the parking lot. You’ll see the sea stacks. Erosion formed these spectacular towers of rock rising from the sea.

To explore the tidepools that form, time your visit at low tide (check the tide charts), when marine creatures (sea stars, anemones, urchins, limpets, and crabs) may be observed.

Rialto Beach is another popular one that has an excellent location for exploring tidepools at what is called “Hole in the Wall,” an opening in a sea stack, located about 1.5 miles north of the trailhead.

Get “high” on Hurricane Ridge 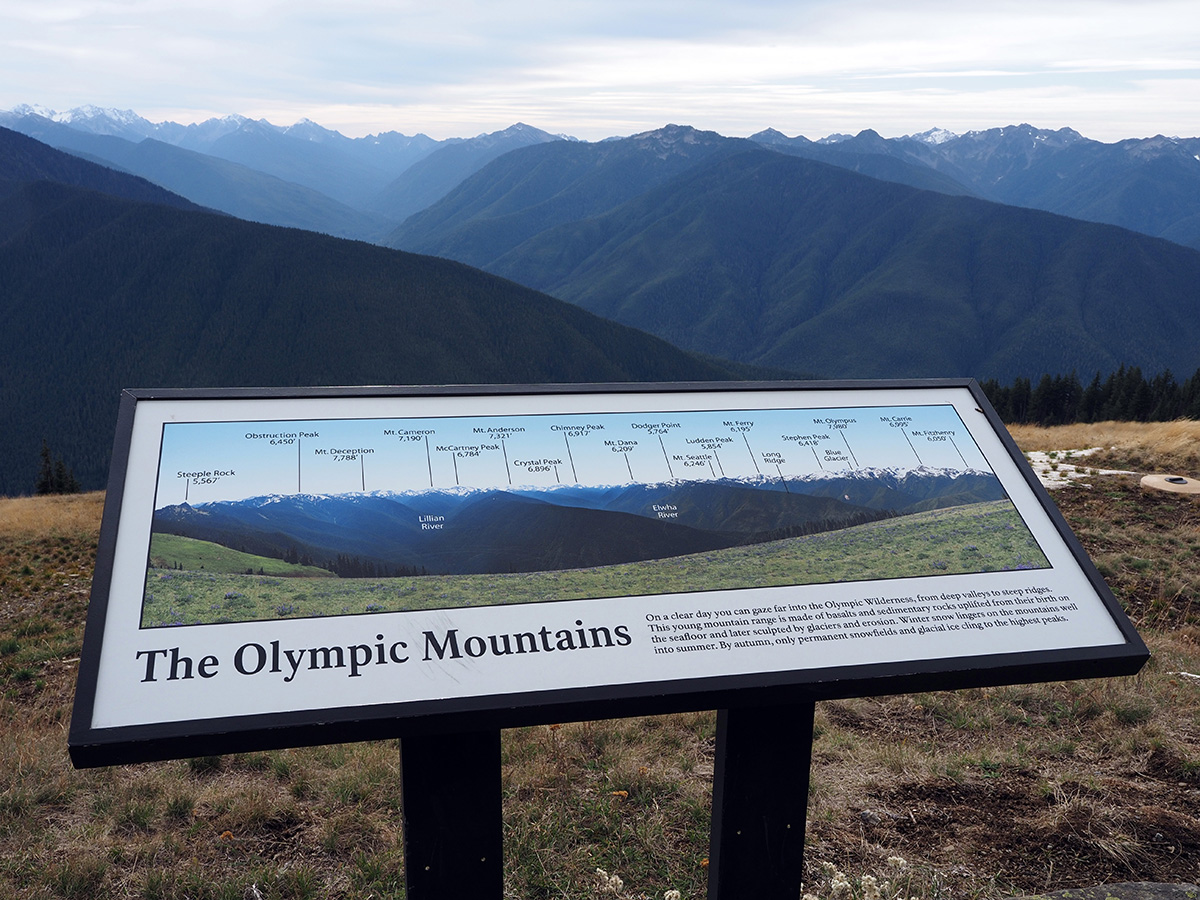 For a natural high, travel 17 miles south of Port Angeles up the ridge road to reach the top of Hurricane Ridge. You’ll be nearly a mile high (5,242 feet) when you reach the Visitor’s Center. Hurricane-force winds above 80 mph have been reported here but were not to that level on the day we visited. We braved the chilly winds just long enough to snap photos and take in views of the mountain peaks that surrounded us.

Hiking trails are well-used during spring and summer, while hardy snow enthusiasts make their way to the area during winter months for cross-country skiing and snowshoeing.

Hike the trails…or take a tour

Hiking in the Hoh Rainforest

Whether you are a fair-weather walker, a serious hiker, or somewhere in between, there is a trail for you in Olympic National Park. With 600 miles of trails ranging from easy to strenuous, you can pick your elevation (from ground level to over 3,000 feet) and surroundings (coastline, mountains, or rainforest). Go on your own or book a day hike with an experienced guide. For more information, check out Washington Trails Association’s Hiking Guide.

Not a hiker? Schedule an educational half-day guided Quinault Rainforest Tour via coach, which includes short walks and plenty of photo opportunities. Three boat tours from Lake Quinault Lodge are also offered — morning, afternoon, and sunset. Canoes, kayaks and paddleboards can be rented too.

Visit the Valley of the Giants 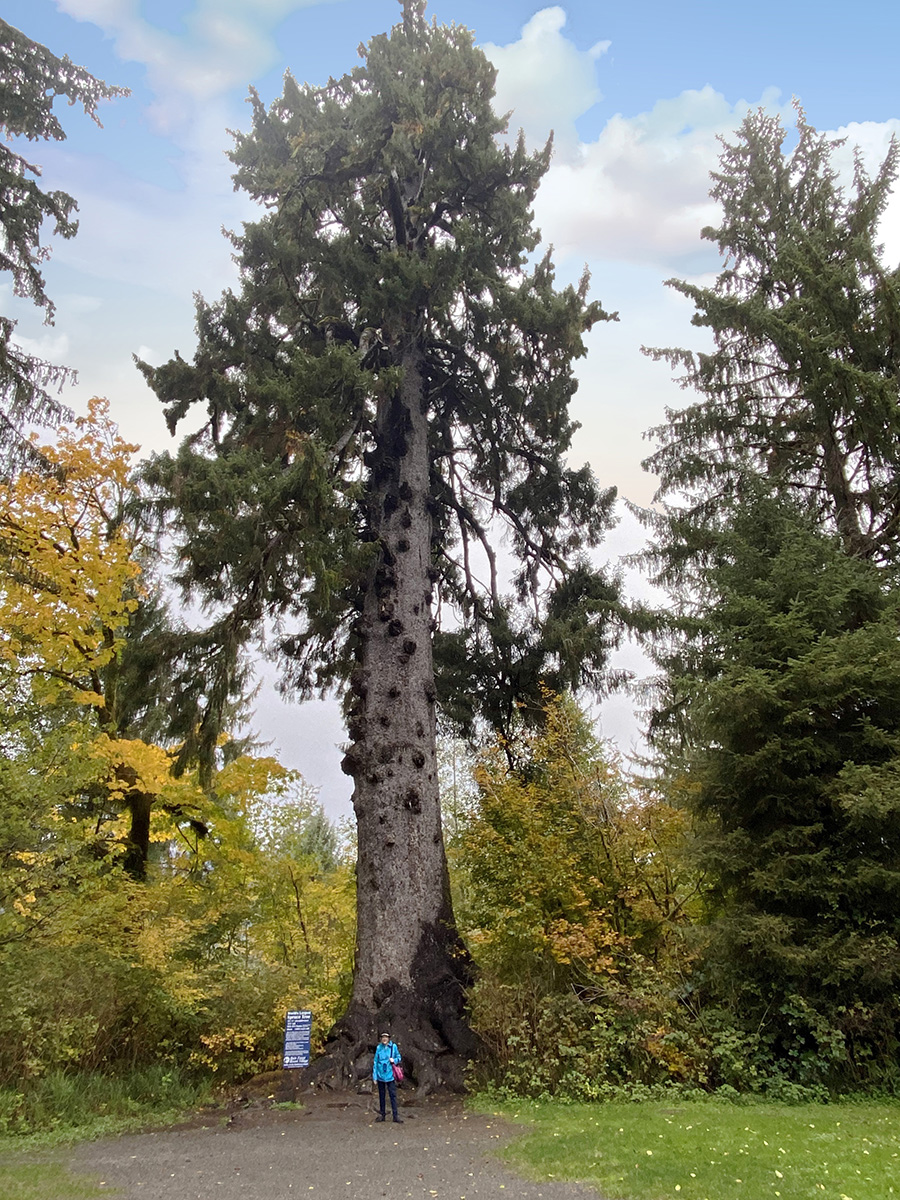 Six champion conifer trees grow along eight miles of interconnected trails near Lake Quinault Lodge in Olympic National Park. Located in the Valley of the Giants, these conifers are recognized as the largest living specimens of their species by the National Forestry Association.

We sought out one of them, the World’s Largest Sitka Spruce Tree, located on the grounds of Rain Forest Resort Village. With an estimated age of more than a thousand years, it stands 191 feet high (that’s taller than a 10-story building) and measures nearly 18 feet in diameter. 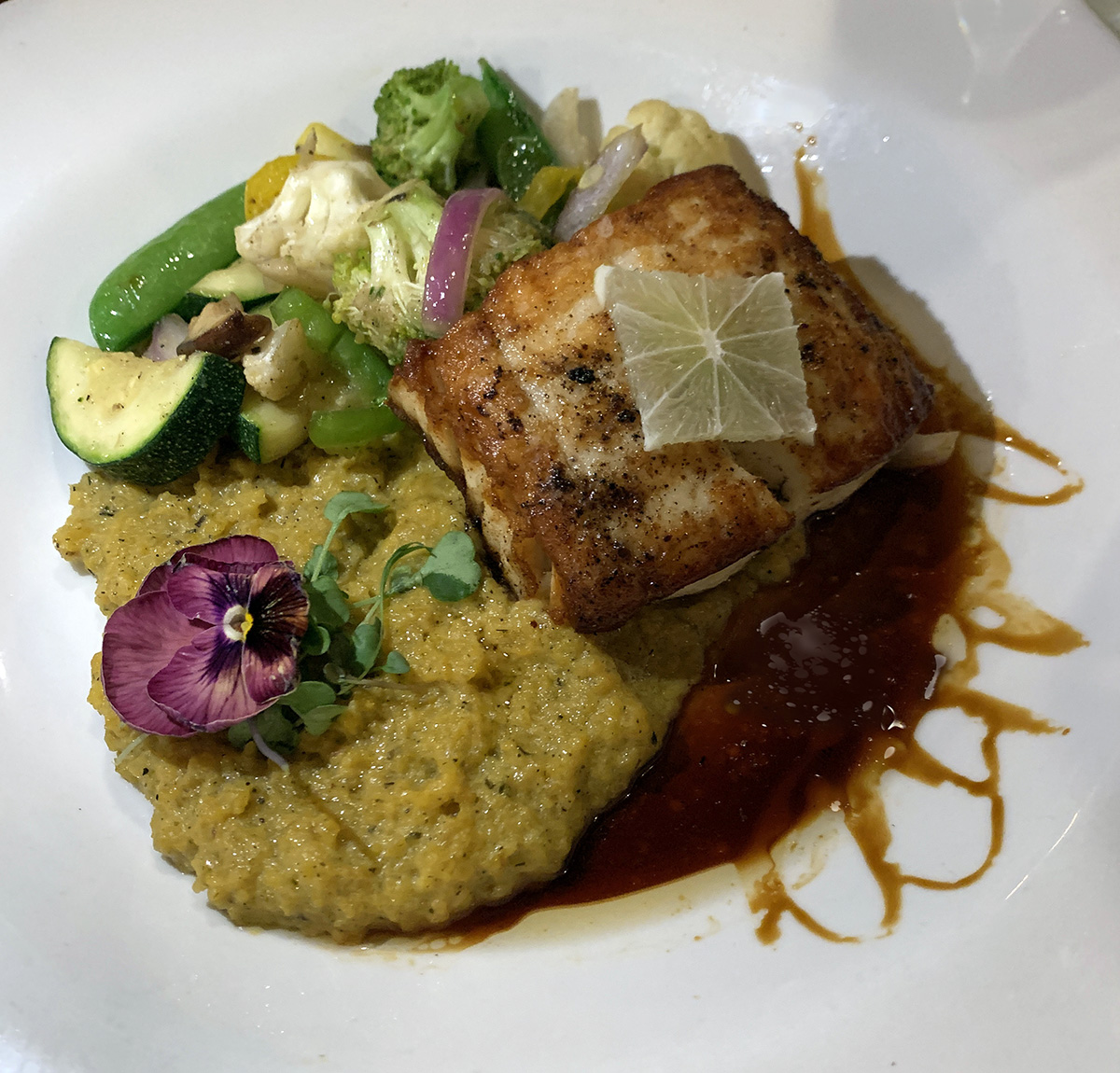 The cuisine of the Olympic Peninsula is influenced by its proximity to the coast. Salmon, trout, char, halibut, and Dungeness crab can all be found on restaurant menus. Wine lists heavily feature Washington wines. We began each evening with a local vintage, which we paired with appetizers of Penn Cove mussels or seafood chowder. Our “fresh catch” entrees included perfectly prepared salmon and halibut.

We sampled wines at two of the nine Olympic Peninsula Wineries. Both were in Port Angeles — Camaraderie Cellars and Harbinger Winery. When you’re ready to take a break from outdoor activities, stop at a tasting room and savor a glass of Washington wine. 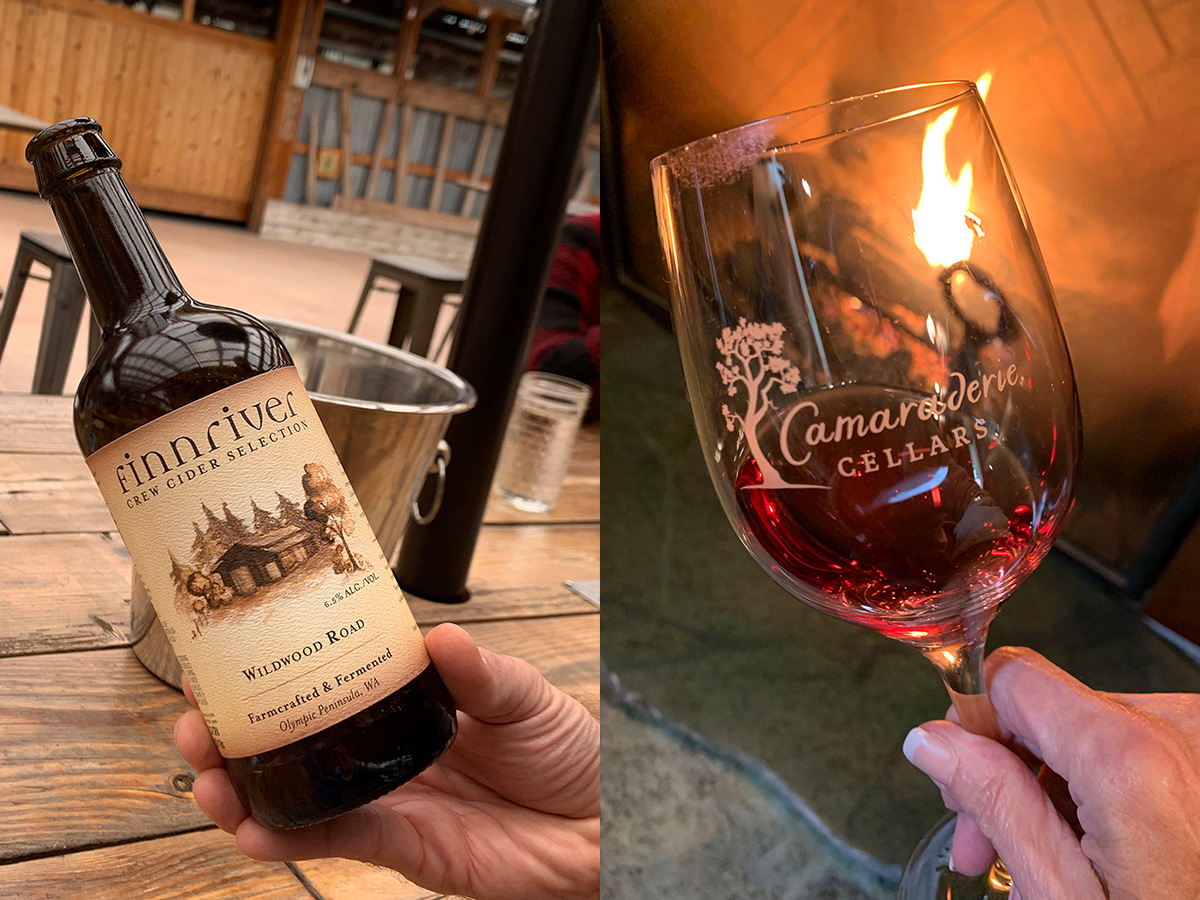 FinnRiver Farm & Cidery in Chimacum produces hard cider and fruit wine; Camaraderie Cellars in Port Angeles is one of nine wineries in the Olympic Peninsula.

Fans of hard ciders will want to stop in Chimacum, as we did, for a tour of Finnriver Farm & Cidery, a 50-acre organic orchard. We sampled a selection of its award-winning hard ciders and fruit wine while learning the process of making it from organic cider apples and pears. Two other cideries – Alpenfire and Eaglemount – are located within a 10-mile area. You can visit all three in one afternoon. 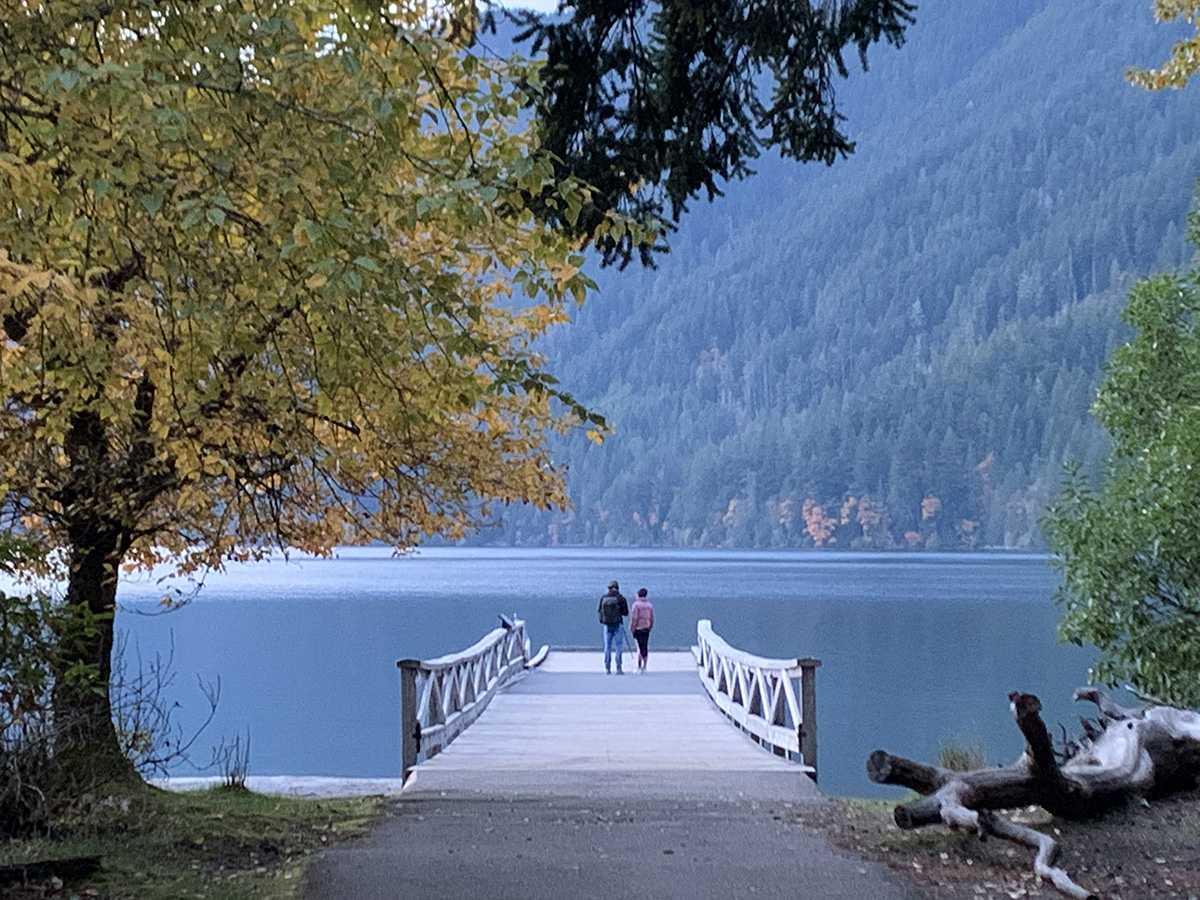 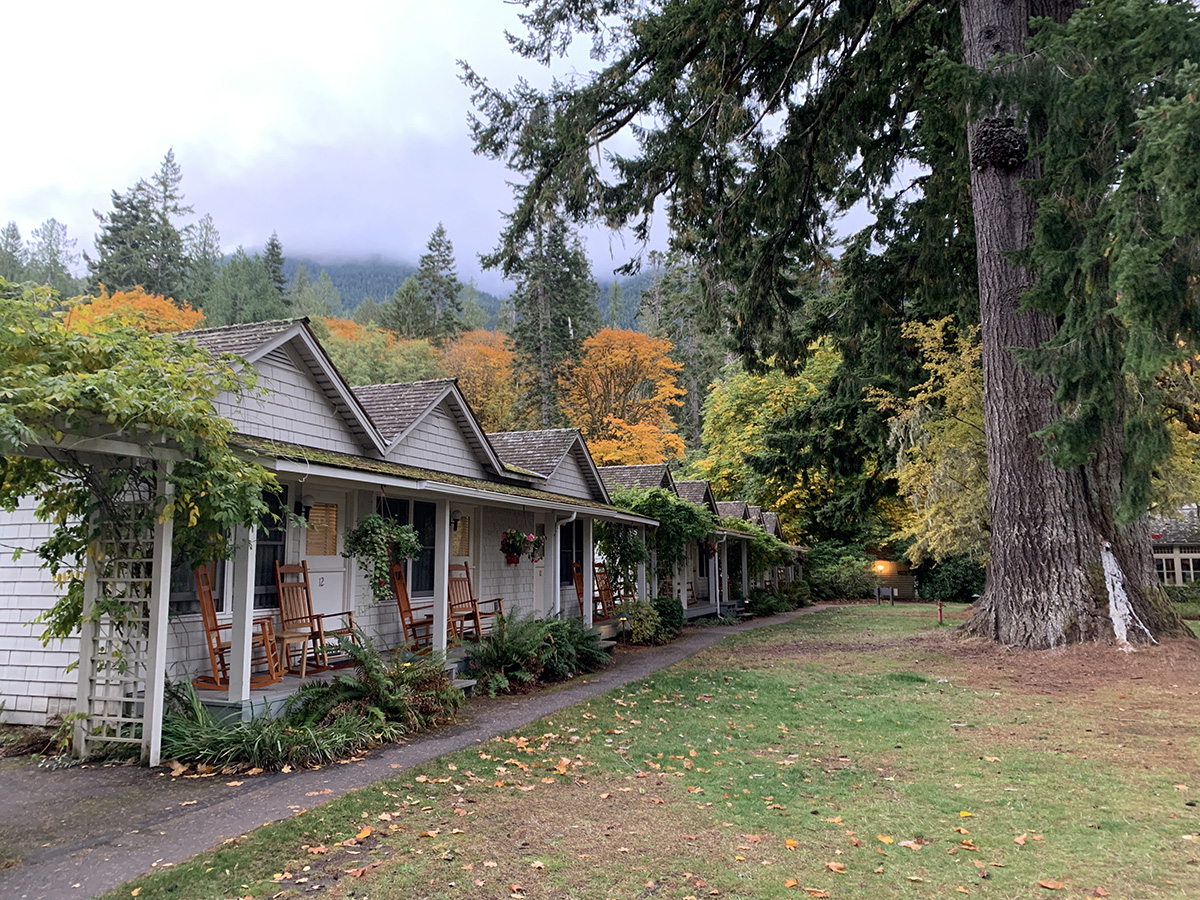 We stayed in one of the vintage Singer cottages at Lake Crescent Lodge.

My travel companion and I stayed at two of the four lodges located within Olympic National Park – Lake Crescent Lodge near Port Angeles and Lake Quinault Lodge.

Lake Crescent Lodge was originally opened in 1915 as Singer’s Lake Crescent Tavern. We stayed in one of 20 cabins with a view of the brilliant blue, glacially-carved lake. It owes its clarity to a lack of nitrogen, which limits the growth of algae. More accommodations (55 rooms) are available in the lodge and an adjoining building.

Hiking trails from Lake Crescent Lodge to Merrymere Falls and other sites can be found at this link.

Sol Duc Hot Springs Resort had already closed for the season when we were there. If you visit in the spring or summer months, check availability for one of its 32 cabins, with easy access to the hot springs mineral pools. 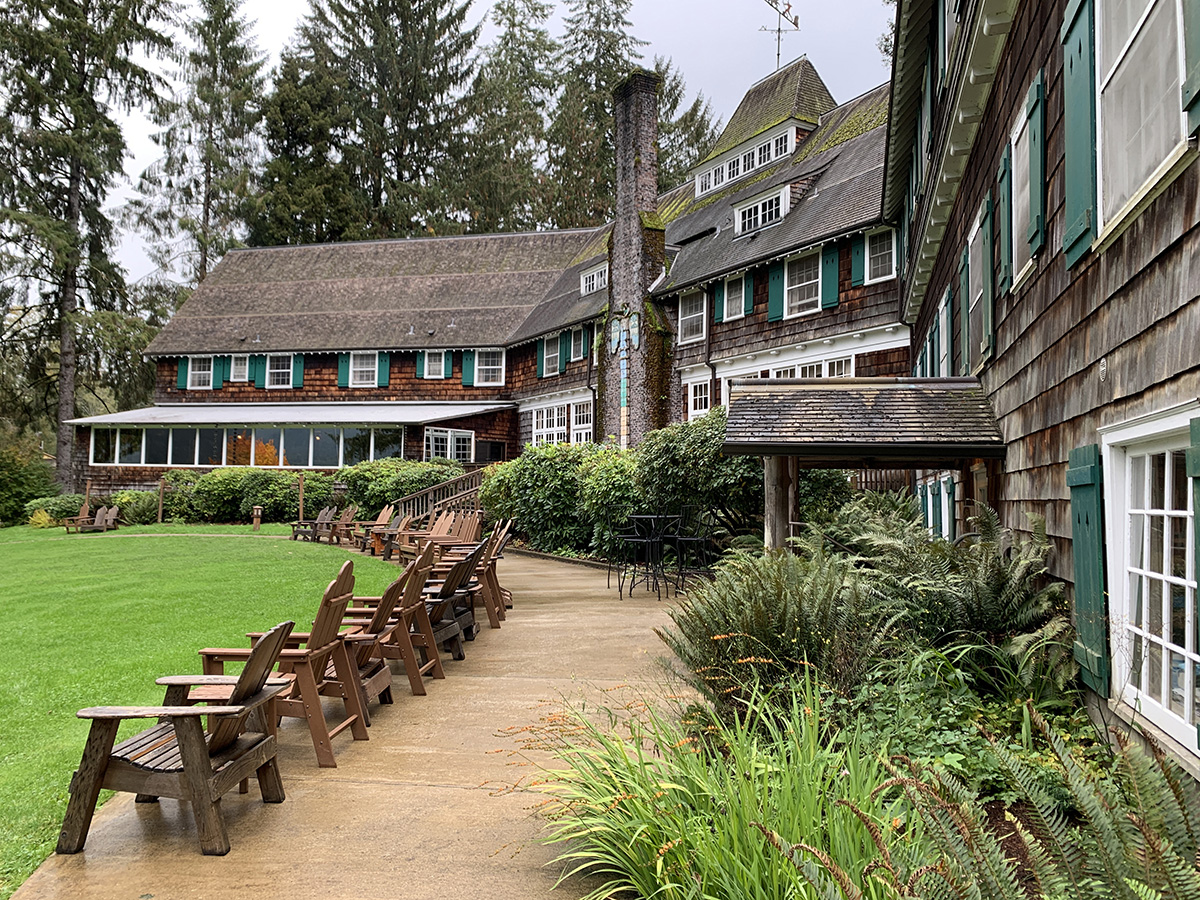 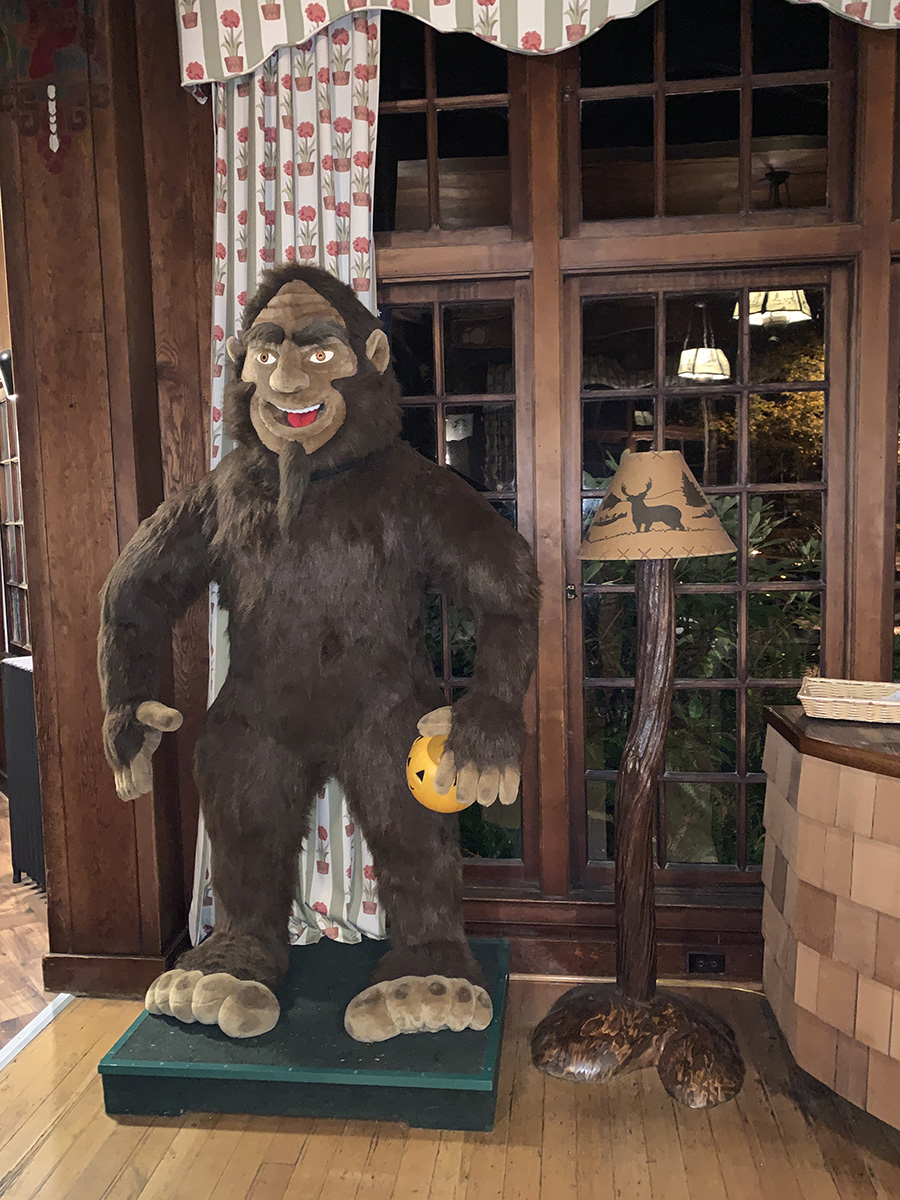 We found Sasquatch, in the lobby of Lake Quinault Lodge!

Our last two nights were spent at Lake Quinault Lodge, built in 1926. Unlike the other Olympic National Park lodges which close seasonally, its 91 rooms are open year-round. The Roosevelt Dining Room was named for President Franklin D. Roosevelt, who had lunch at the lodge in 1937.

Pack your rain gear and waterproof boots. Since the Olympic Peninsula receives over 140 inches of annual rainfall (that’s nearly 12 feet), it’s best to be prepared. Rain jackets or ponchos and waterproof boots will most likely be needed no matter when you go.

July and August are the driest months; November through March are wettest. We visited in mid-October and had a nice mix of sun and brief showers.

Learn about pass options and fees by visiting the National Park Service website for Olympic National Park. Visitors 62 years of age and over can apply for a Senior Pass.

The America the Beautiful – The National Parks and Federal Recreational Lands Pass Series may be a better option if you plan to visit more than one national park this year. There are also interagency passes to access more than 2,000 federal recreation areas across the U.S.

What’s appealing to over-50 luxury travelers

Disclosure: The author was hosted by Olympic Peninsula Visitors Bureau and Visit Seattle. 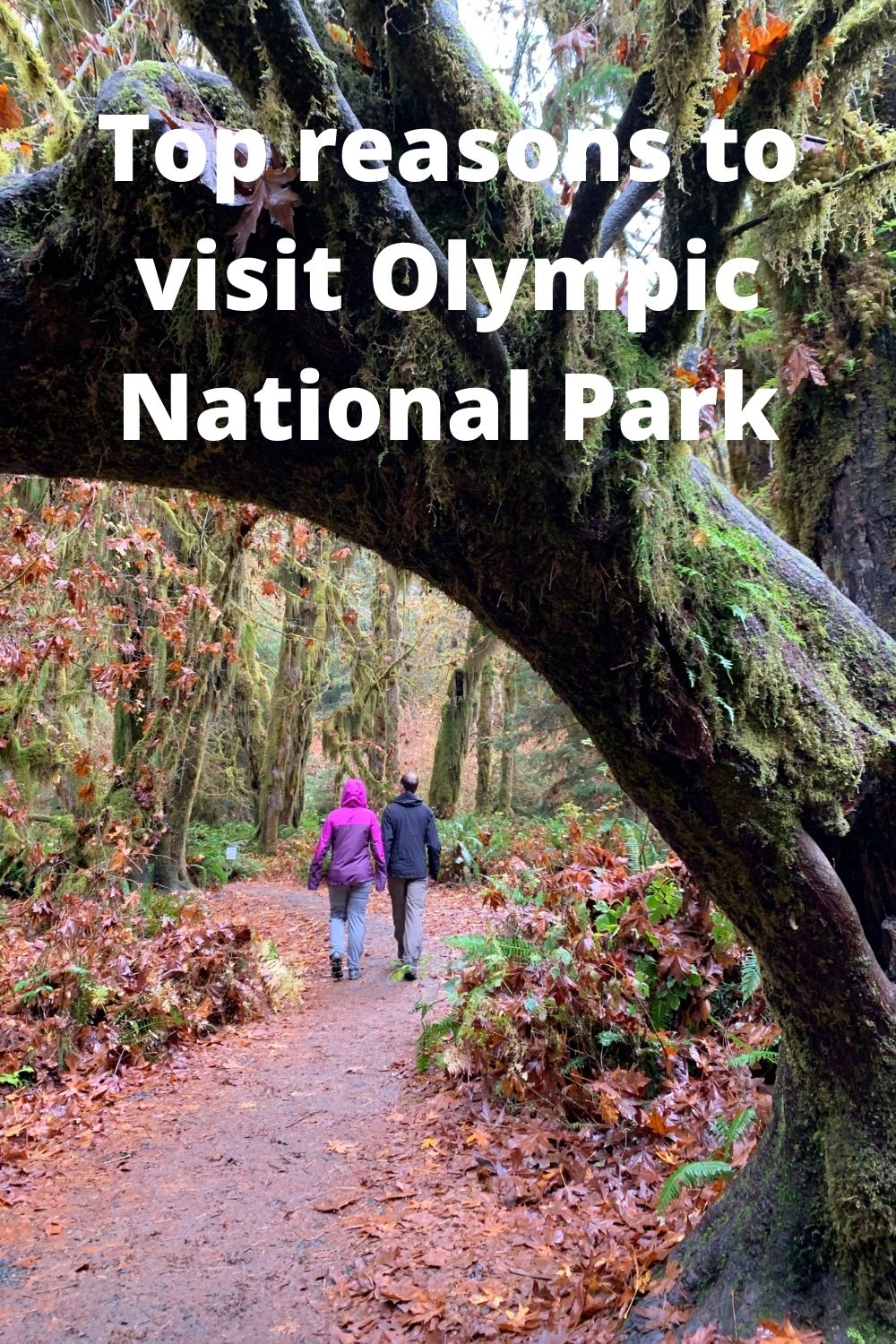