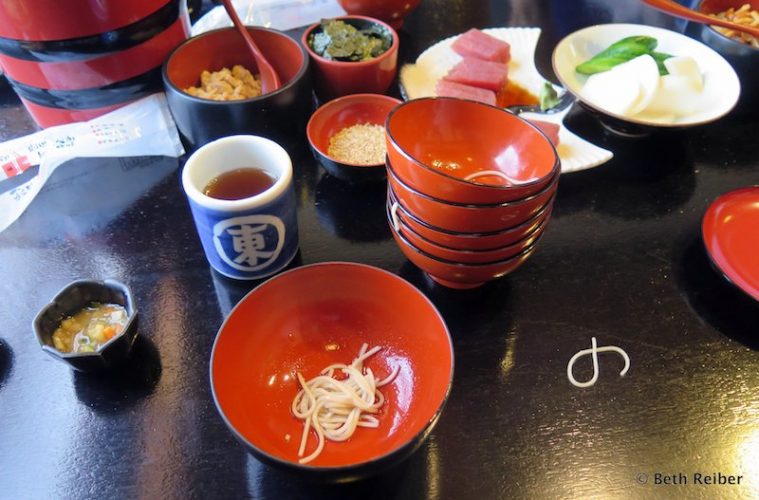 In my many years traveling around Japan as the author of several Frommer’s guides, I’ve had my share of culinary surprises, from grilled eel’s head to raw chicken, horsemeat, and fish so fresh it’s still quivering when brought to the table.

Turns out, virtually every corner of Japan has specialties so regional that even visiting Japanese might not know them. So it’s no surprise that Iwate Prefecture, Japan’s second-largest prefecture and located in the Tohoku region on the northeastern end of Japan’s main island, has its own culinary quirks. Eating as many buckwheat noodles as you can possibly stomach in one sitting must certainly rank among them.

Oodles of noodles in Iwate Prefecture 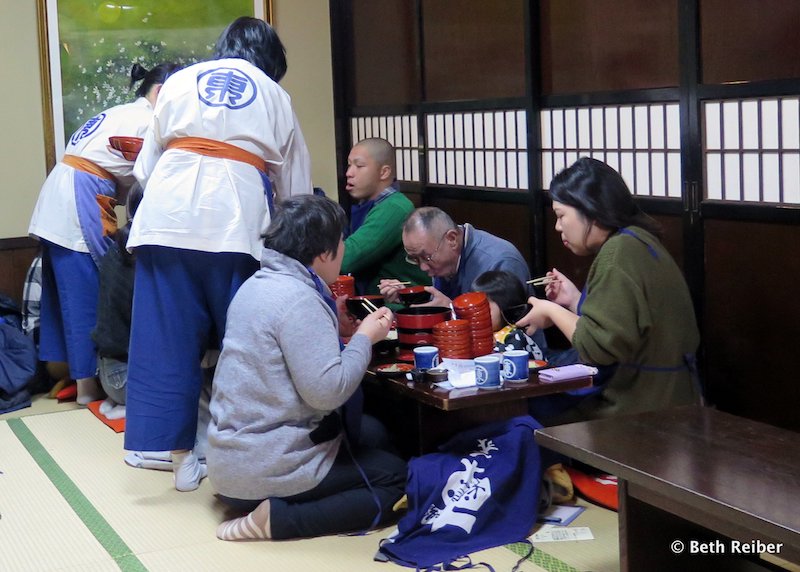 I knew my performance would be pitiful even before I started digging in at Azumaya, a wanko soba restaurant in Morioka, capital of Iwate Prefecture. That’s because while I’ve always been impressed by how quickly Japanese can finish off a bowl of noodles in normal circumstances, at this restaurant everyone looked like they were eating in fast-forward drive, with bowls stacked in front of each diner testimony to how many noodles they had already consumed. I, on the other hand, am a slow eater, and I’ve never mastered the Japanese technique of sucking in a portion of chopstick-full noodles like a vacuum.

Not that dining on wanko soba is a speed-eating competition, but it is expected that you’ll finish off as many bowls of noodles as you can, perhaps besting everyone at your table or even setting a new record.

Luckily, each lacquered wooden bowl (wanko means “bowl” in local dialect) contains just a mouthful of soba, with waitresses standing by to deliver yet another bowl of noodles one right after the other until you signal you’re done by covering your last empty bowl with a lid. There’s no time limit, but you do have to eat continuously, taking a break from noodles, perhaps, by trying side dishes like green onion, ground chicken, grated yam and sesame seeds which come with your meal. 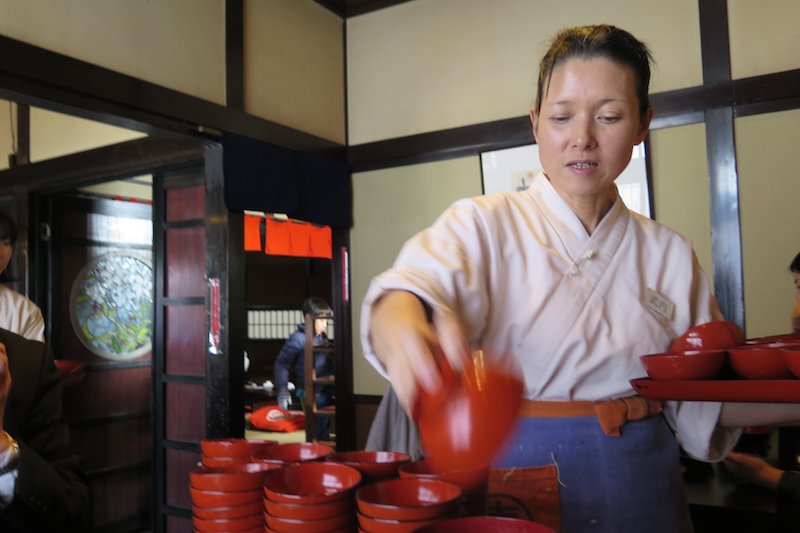 True wanko soba aficionados, however, would never jeopardize their bowl count by eating anything else until they’re done with noodles. They also skip drinking the small amount of broth in each arriving bowl of noodles; a container is placed in front of you expressly for dumping the liquid after you’ve slurped the noodles. Furthermore, chewing your noodles is regarded as a waste of time. Rather, the restaurant suggests that you swallow them whole.

You can keep track of how much soba you’ve consumed by counting the number of bowls stacked in front of you, with 15 considered equivalent to a regular portion of soba served in any restaurant, and 30 to 60 bowls the average attained in a wanko soba joint. I managed a paltry 20 bowls of soba, while the woman seated next to me downed 67. The winning number of bowls at Azumaya is 345.

In addition to restaurants in Morioka, Hanamaki in southwestern Iwate is also famous for its wanko soba restaurants, including Kajiya, founded in 1904 and claiming to have invented the custom. There are also annual wanko soba eating competitions in Iwate, with the record in one hour totaling an astounding 570 bowls—by a female competitor, no less. I can’t even imagine. 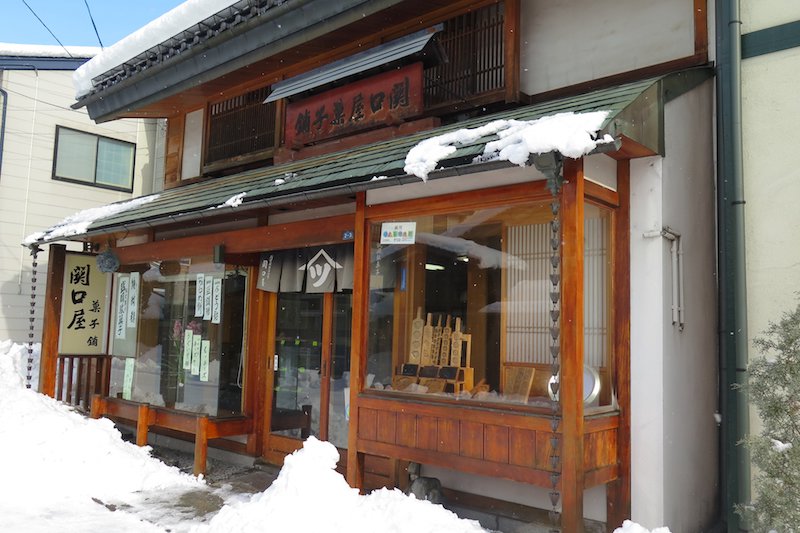 When visiting Morioka, foodies will also make the rounds to some time-honored shops, which, while they may not be unique to Iwate, are famous for what they offer. 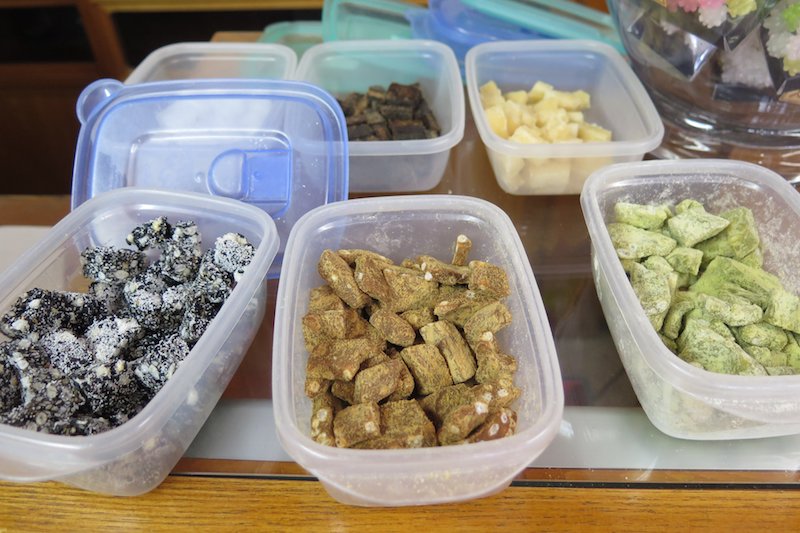 Sekiguchiya is a 120-year-old confectionary store, offering sweets flavored with soybeans, mint, ginger, green tea, sesame (my favorite) and other ingredients. They’ll last 50 days, making them good souvenirs to take home if by some miracle they last that long.

Shirasawa has been selling rice crackers (sembei) for almost 90 years. Esteemed by samurai as an emergency food, sembei from this shop were sent to Kobe following its 1995 earthquake as comfort emergency food for survivors. Twenty-one kinds are available, including those with lemon, soy sauce, sesame, shaved peanuts, chili and other ingredients, but sembei with spicy kimchee is the shop’s specialty. 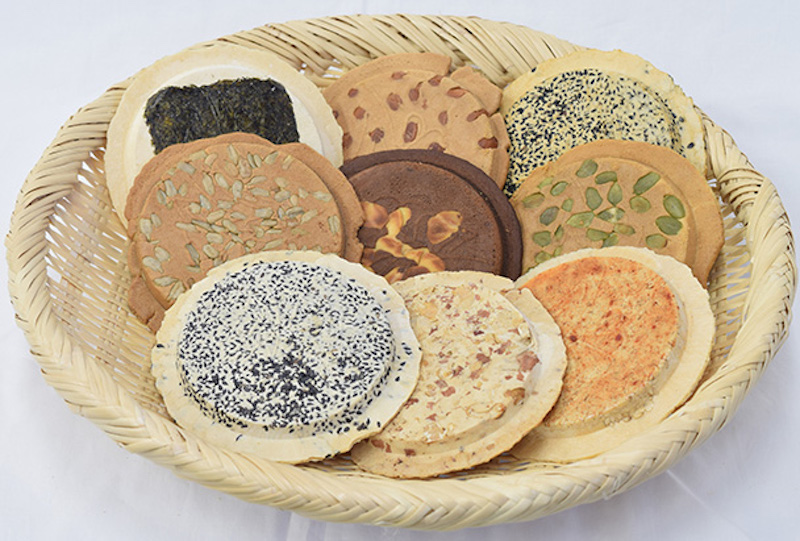 Fukuda Pan is an old-fashioned-looking shop serving koppe pan, a fluffier and larger take on hotdog buns, filled with yummy ingredients. In business since 1948, this takeout restaurant is famous across the country for its 60 different toppings, making some 2,800 two-filling combinations possible. The most popular combinations are bean paste with butter and strawberry jam with peanut butter, but you can also make up your own combo from choices like banana, yogurt, green tea, coffee, apricot jam, sweet potato, keema curry, teriyaki, chicken, tuna, potato salad and other options. 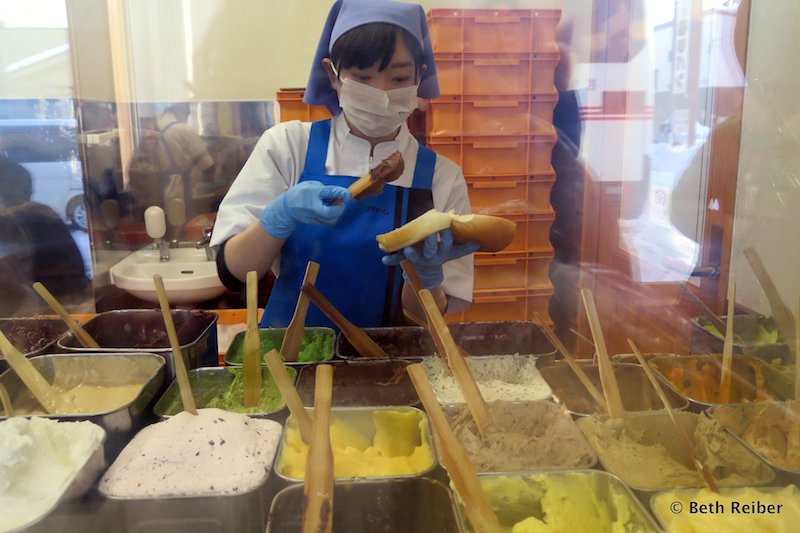 Of course, Iwate Prefecture has many other food specialties that can also be found in many other areas of the country, including rice, wagyu beef and apples. Seafood, too, is an expected food in this island nation, but Iwate is further blessed with the merger of three major Pacific Ocean currents off its shores, bringing in a wide diversity of species. 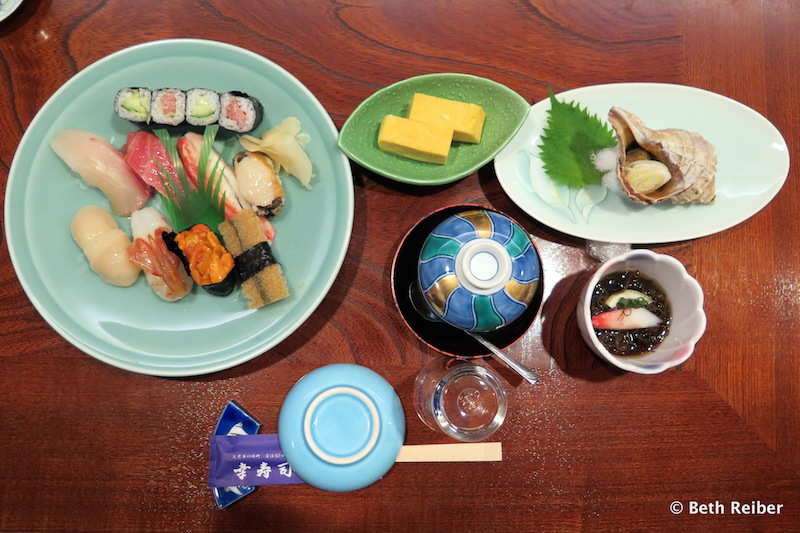 Iwate Prefecture is renowned for its seafood

Winter offers its own culinary experiences, including the opportunity to dine in an igloo at the Iwate Snow Festival, held in February outside Morioka. 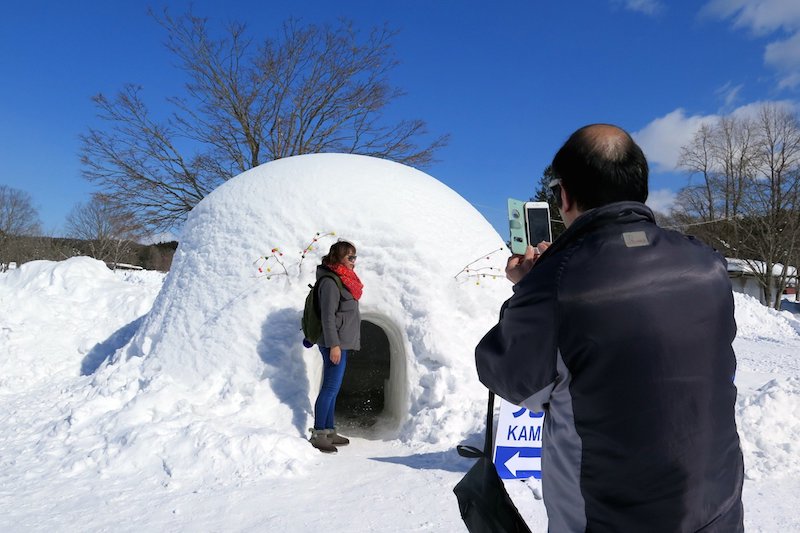 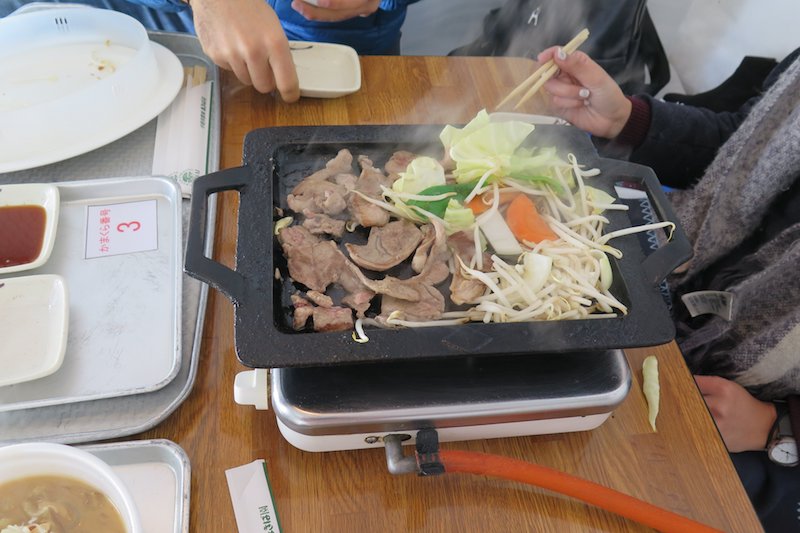 And if you want an oyster stout, you’ve come to the right place.

For more information on what to do in Iwate Prefecture, including its recovery since the 2011 tsunami (Iwate was one of the hardest-hit areas) and new developments, see the author’s article at Frommers.com/

Photo credits: All photos by Beth Reiber, unless otherwise noted.

The author’s trip was sponsored by Iwate Prefecture 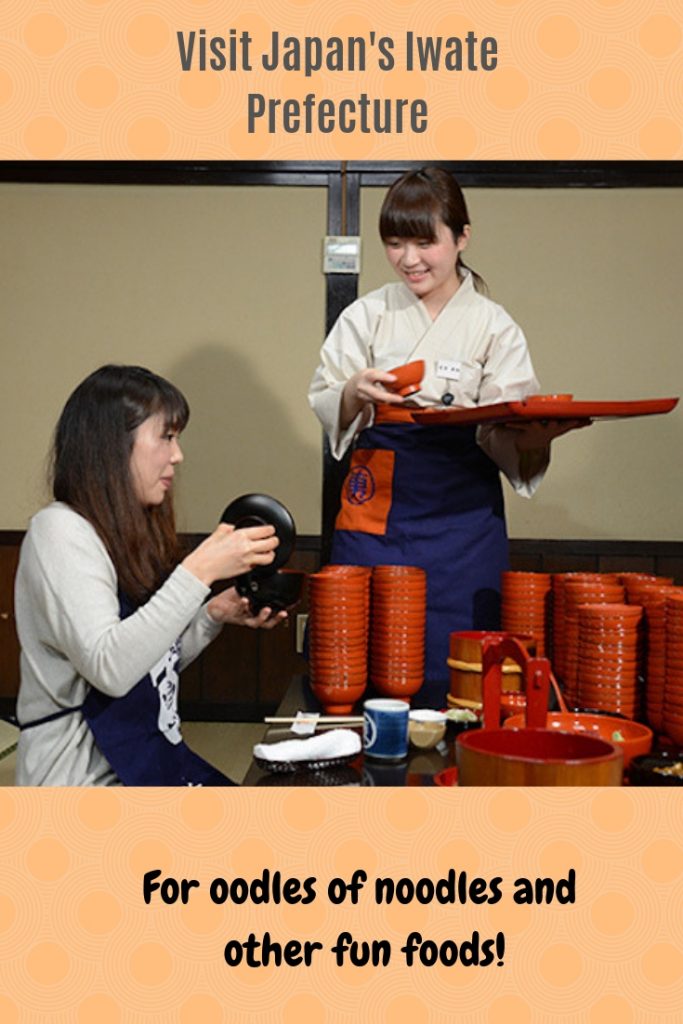