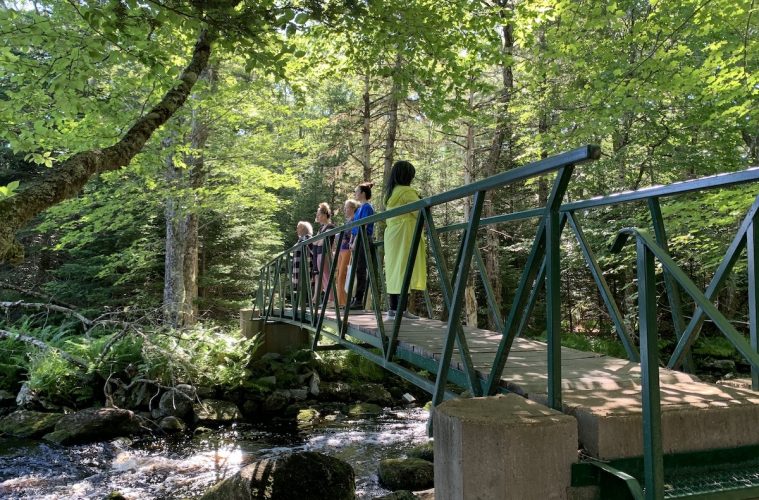 To face upstream or downstream? That’s the first choice to make while forest bathing in southern Nova Scotia, and it seems deliciously existential. 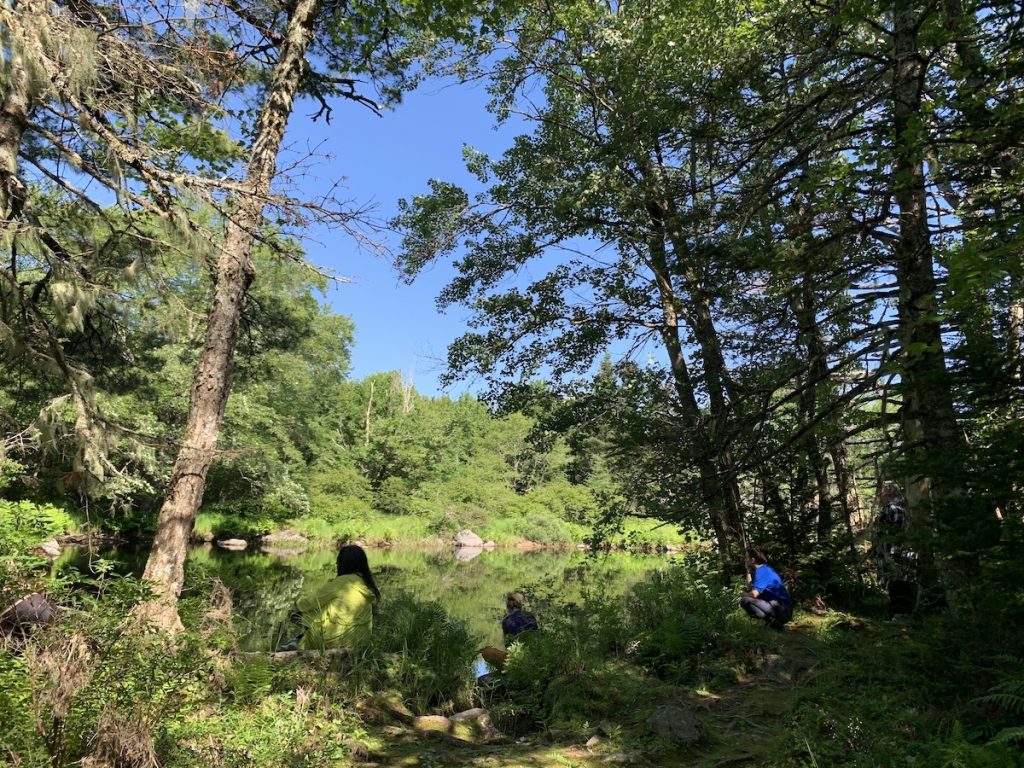 Forest bathing by the Tusket River at Trout Point Lodge

Standing on a footbridge in the thick summer forest surrounding Trout Point Lodge, I consider how people who swim upstream make things happen, while those who swim downstream go with the flow. And so, I stand still facing upstream, taking note of movements and colors as the Tusket River spills around a tiny island. 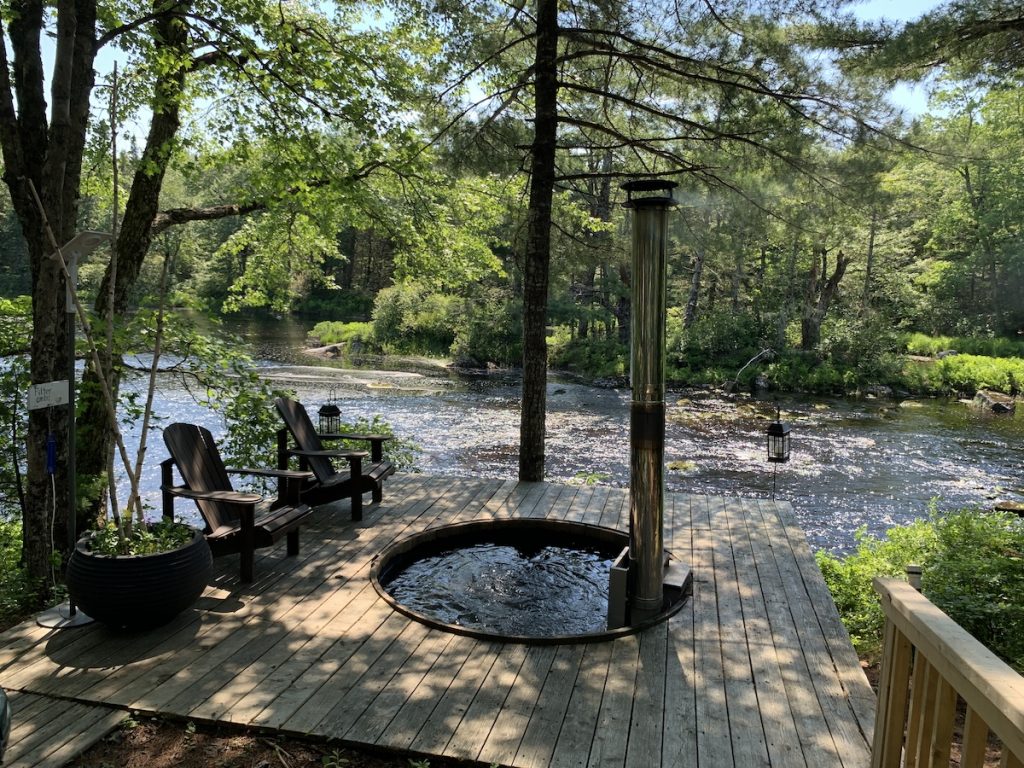 Eventually, the guide — a recreation and leisure studies student on a co-op placement — says it’s time to reopen my eyes and notice what’s different. The world is bright and vivid. My notoriously restless energy is almost calm.

This is forest bathing, the Japanese practice of forest therapy known as shinrin-yoku (shinrin means forest and yoku means bath). American journalist/author Florence Williams famously detailed the practice in Outside in 2012, writing, “take two hours of pine forest and call me in the morning.” Although a decade has passed, people are still confused by forest bathing.

I’ve taken thoughtful guided walks through the woods to embrace the healing properties of trees and plants before in British Columbia, Alberta, and Ontario, and so I am well versed in the four “invitations” that will come after the bridge choice and before a closing tea. 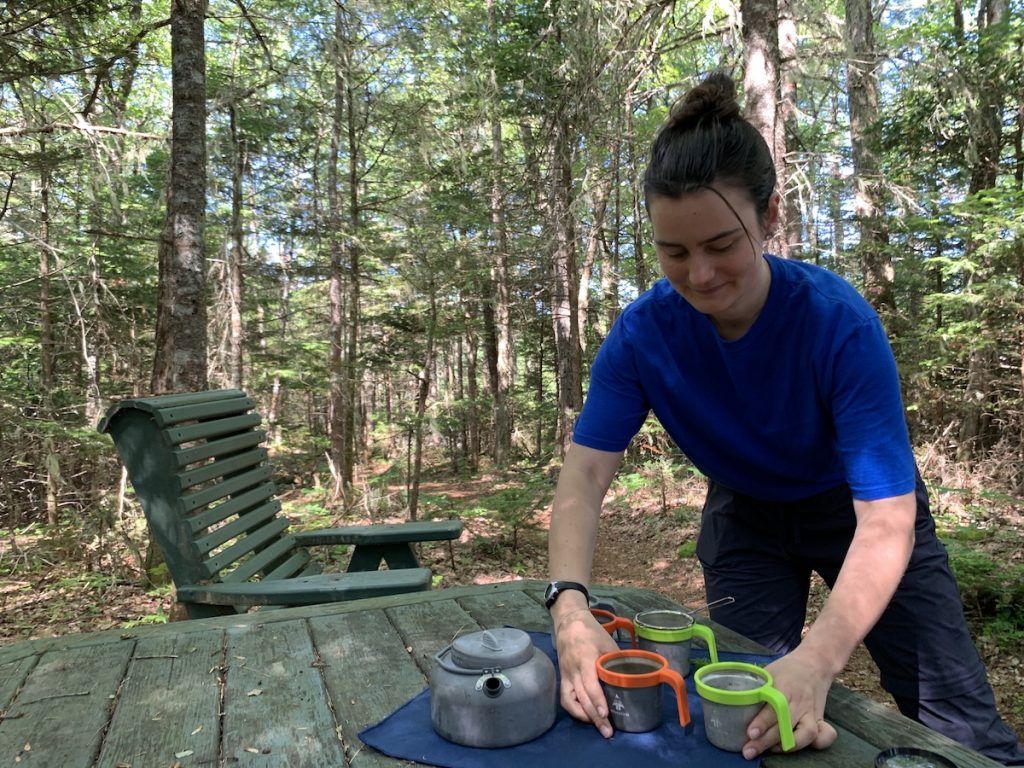 I cross the bridge onto an island filled with balsam fir, white pine, white spruce and red maple. When given 15 minutes to “feel anything” that catches my interest, I study fallen pine cones and decaying needles on the forest floor.

Perched on a rock by the river, I spend another 15 minutes absorbing noises near and far. Finally, I microfocus on gnarly lung lichen before sipping a camping mug full of balsam fir and wintergreen tea.

“As you drink it, just absorb your times here and allow it to go with you throughout your day,” urges Nixon. “Wintergreen helps with body aches and headaches as well as relieving stress. Balsam fir gives the immune system strength and relieves cold and flu symptoms.”

Who isn’t stressed from more than two years of pandemic living? 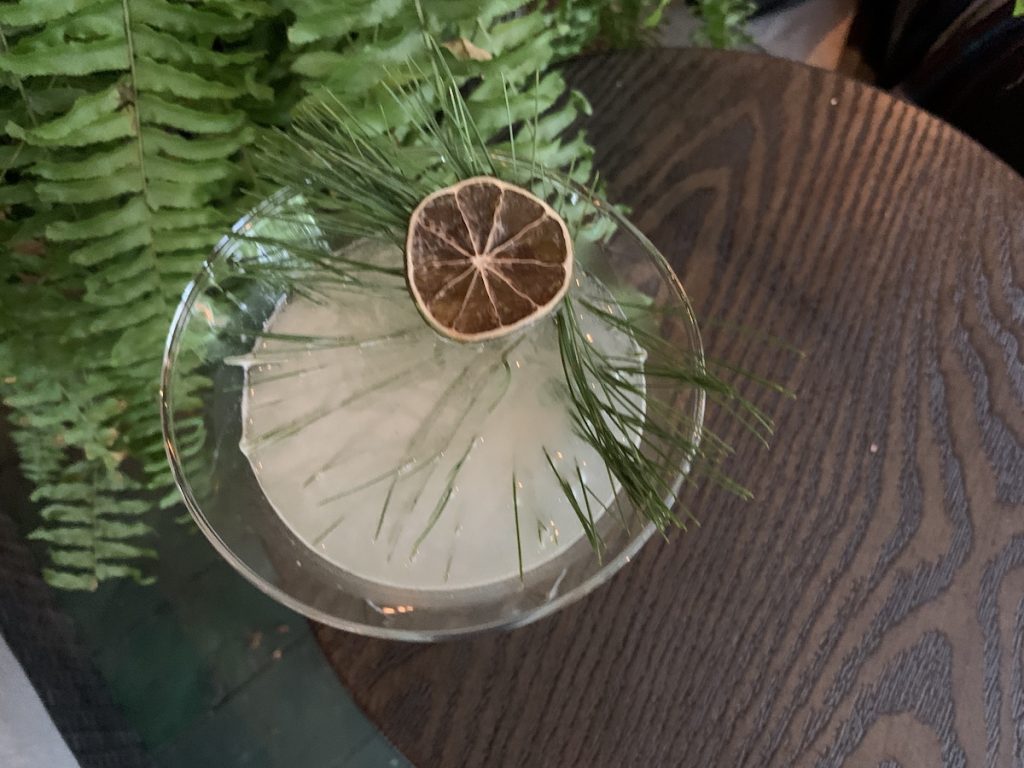 I flew into Halifax, Nova Scotia’s walkable capital with a population of 460,000. Based at the Westin Nova Scotian Hotel, I explored the Canadian Museum of Immigration at Pier 21 and the iconic Halifax Citadel National Historic Site.

I also caught a ferry to Georges Island National Historic Site. And I made a pilgrimage to King of Donair for the city’s official food: spiced, pressed beef cooked on a vertical rotisserie and shaved into a pita along with a signature sweet sauce, tomatoes and onions.

Luxury in the Nova Scotia wilderness 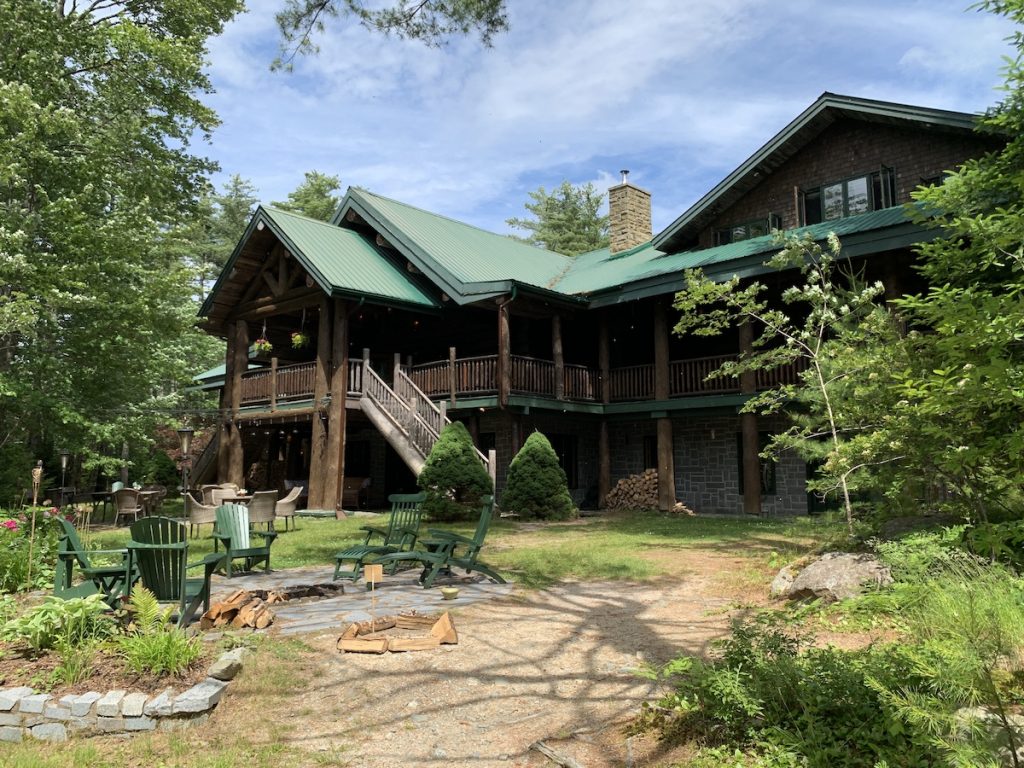 It’s a joy to begin exploring the world again at this luxury wilderness escape three hours southwest of Halifax in the Yarmouth and Acadian Shores region of Nova Scotia. Nestled in the UNESCO Southwest Nova Biosphere Reserve, Trout Point Lodge is on 120 secluded acres of the Acadian forest. It’s located on a peninsula near the vast Tobeatic Wilderness area and a few hours from Kejimkujik National Park and National Historic Site.

The seaside gets most of the tourism attention in this Maritime province. But more visitors are joining locals and exploring the inland forests and lakes.

At Trout Point Lodge, a modest daily event calendar is written on a chalkboard. I join Nixon, the staff naturalist, to: 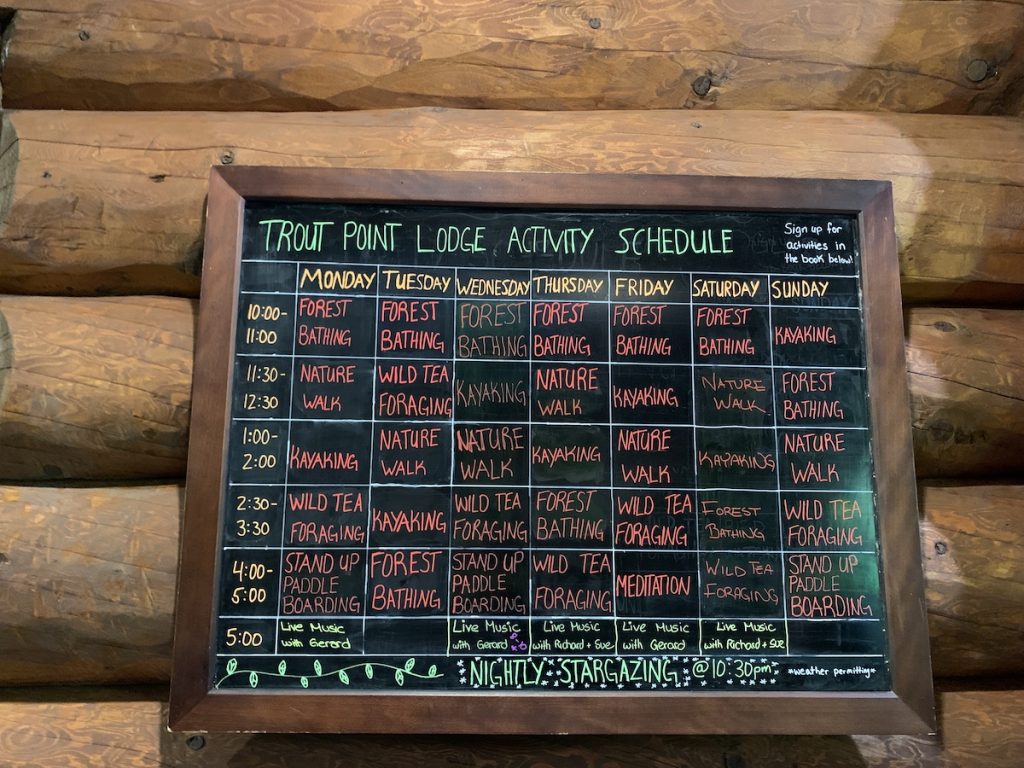 “It’s luxury, culinary, and wilderness kind of put together,” allows Patrick Wallace. He and his wife Pamela bought the lodge from its first owners  in 2018. 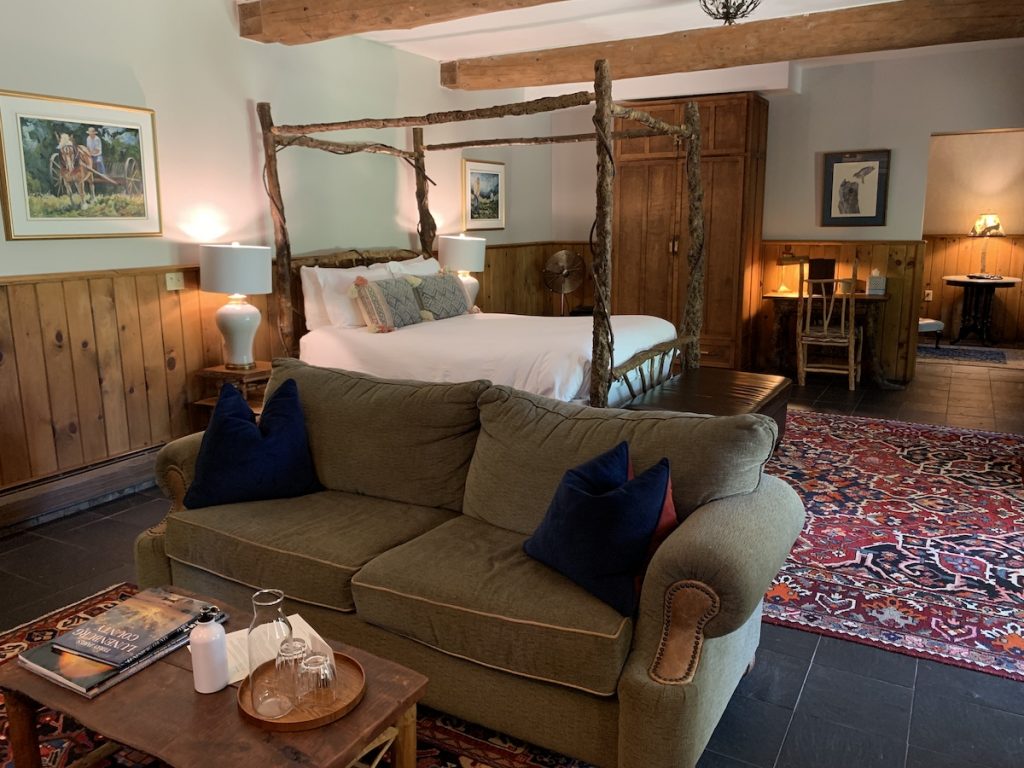 My room at Trout Point Lodge

The lodge, which opened in 2000, promotes itself as “wildly luxurious” and “wildly delicious.” It has recently parted ways with the Small Luxury Hotels of the World. Still, it touts itself as the world’s first certified Starlight Hotel, a distinction awarded in 2014 by the non-profit Starlight Foundation headquartered at the Institute of Astrophysics in the Canary Islands. Alas, rain and clouds scuttle my stargazing.

Yarmouth, with a modest population of 7,000, is a regional center that punches above its weight. And it matches my speed as I ease back into travel. 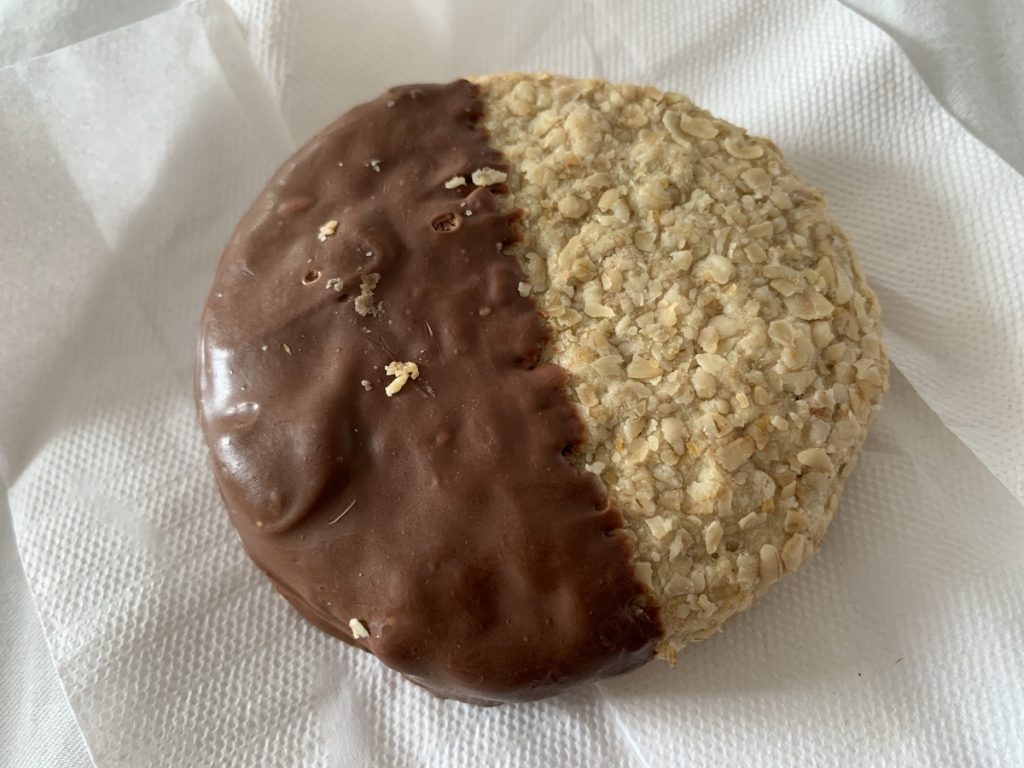 What to see in Yarmouth, Nova Scotia

The interactive W. Laurence Sweeney Fisheries Museum details the area’s fishing history with a room full of reproduced buildings and even a coastal freighter. With David Sollows of the Yarmouth Shantymen band, I take guided, behind-the-scenes visits to a lobster plant and herring/sardine cannery. The self-guided Sea Captains’ Homes and Mercantile Heritage Walk is a jackpot for architecture buffs.

But, as wholesome as my time in Nova Scotia was, the oddities stand out. 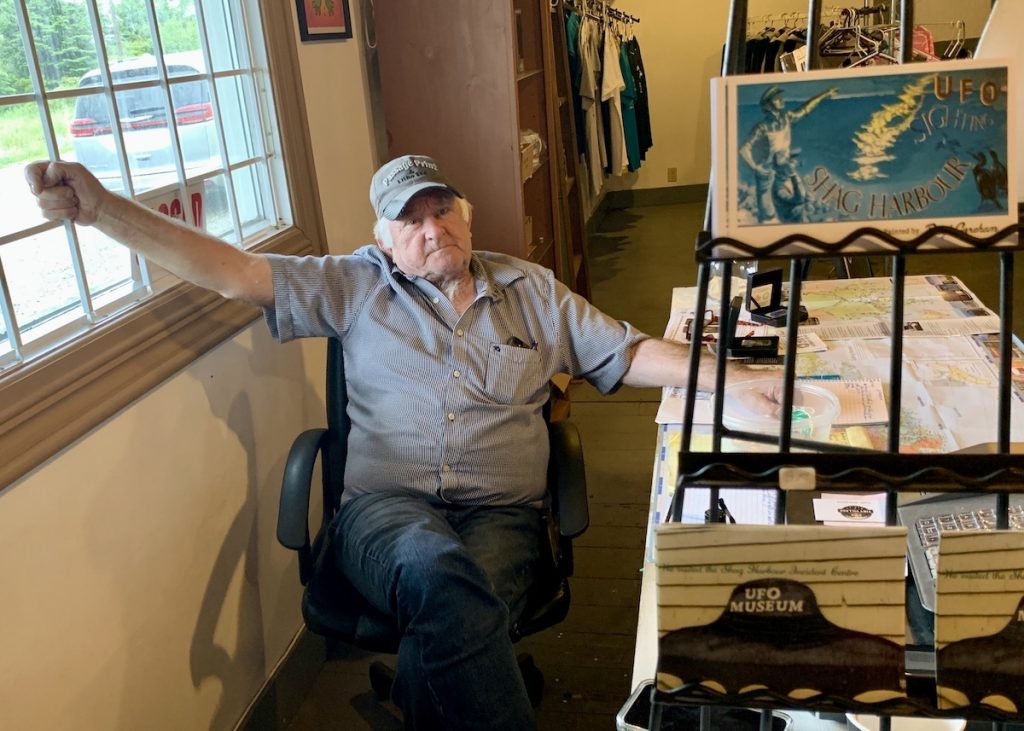 Townsfolk, police and even a commercial airline pilot in the fishing village of Shag Harbour famously witnessed an Oct. 4, 1967, UFO visit. An object with flashing lights — originally feared to be a small plane — hovered over the ocean, crashed, and glowed in the water before disappearing, leaving behind only a yellow foam slick.

The volunteer Shag Harbour UFO Incident Society runs a seasonal interpretive center that hasn’t changed since my last visit in 2018.

“They had divers come, and according to the government, nothing was ever found, to make a long story short,” says society president Laurie Wickens. A witness and retired fisherman, Wickens has recounted the story so many times you can hear the weariness in his voice.

Wickens admits it’s probably the last year for the museum, which is getting harder and harder to staff. But he flags the Shag Harbour UFO XPO slated for Oct. 1 and 2, 2022, at the Rodd Grand Yarmouth (coincidence?). The annual conference brings together UFO experts and eyewitnesses to share their observations, latest theories and research about unidentified flying objects.

I’m no expert but have an above-average fascination with the unexplained. So, at an oceanside rest stop, I mark this visit with photos at the “Crash Site of the 1967 Shag Harbour UFO” sign. And, of course, I snuggle with the lobster alien sculpture painted by artist Tara Goreham.

Called Secrets of the Sea, the human-sized sculpture starts with a bright red lobster tail but then boasts a menacing black head and claws. Inside that head and claws, though, is the outline of a skinny neon green alien. On its belly, a UFO casts light toward a buoy bobbing in a swirling ocean below. 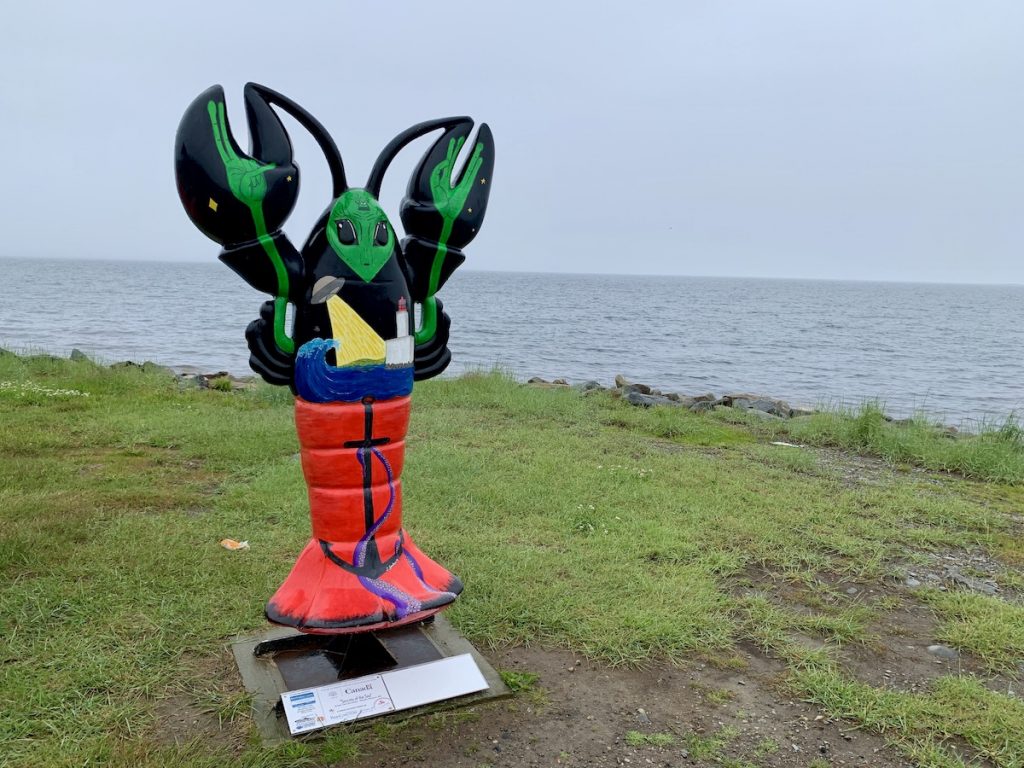 COVID-19 Update Info: What You Need to Know

Disclosure: The author attended a Travel Media Association of Canada conference in Yarmouth, and was partially hosted by Tourism Nova Scotia and the Yarmouth and Acadian Shores Tourism Association. 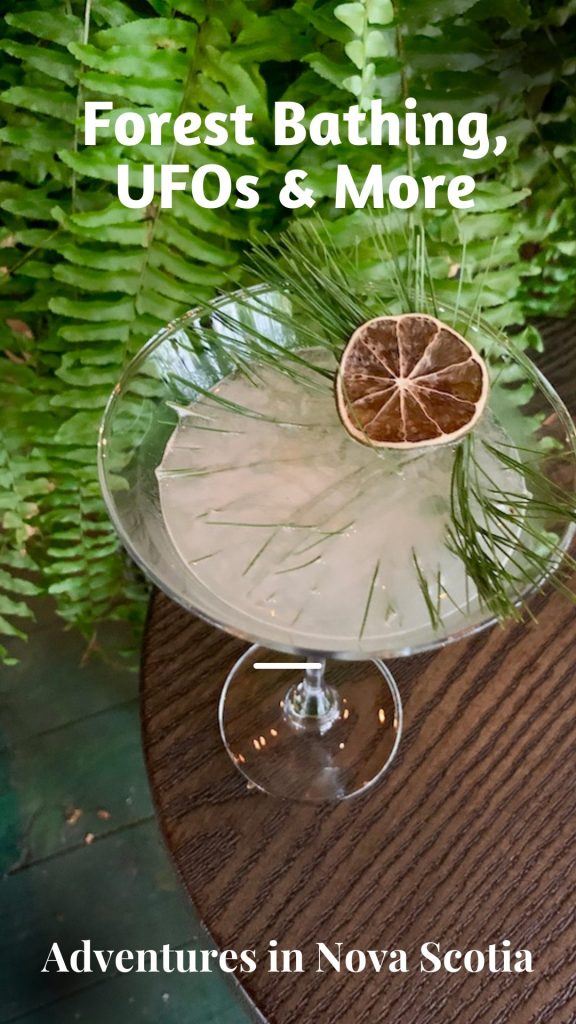