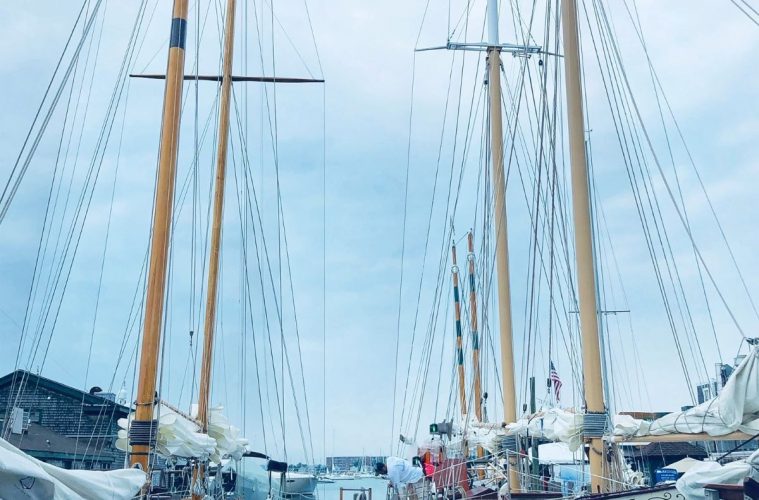 Just a few hours from the New York City vicinity by car, a visit to Newport is perfect for a quick getaway for those desperate for a break from staying in place. It’s a short enough drive for a well-scheduled day trip but also delightful for a longer visit.

Editors’ note: The COVID-19 pandemic has changed the way we travel. With so many restrictions in place, many travelers are venturing closer to home, taking day trips, and seeking to spend their time outdoors.

In times past, visits to Newport (with just over 24,000 people back in 2010, according to that year’s census) would include beach visits, mansion tours, likely spa time, and plenty of walkabouts. Much of that is still offered right now, typically with some COVID-inspired limitations, but visitors will need to plan ahead.

Truth be told, in times like these, visitors need to do what they need to do to feel safe—and feeling safe on my foray beyond the borders of New York State was paramount.

As of this writing, Newport has only had 114 people who have tested positive for the virus. That seemed like a pretty good metric to me.

And so we set off to visit Newport. 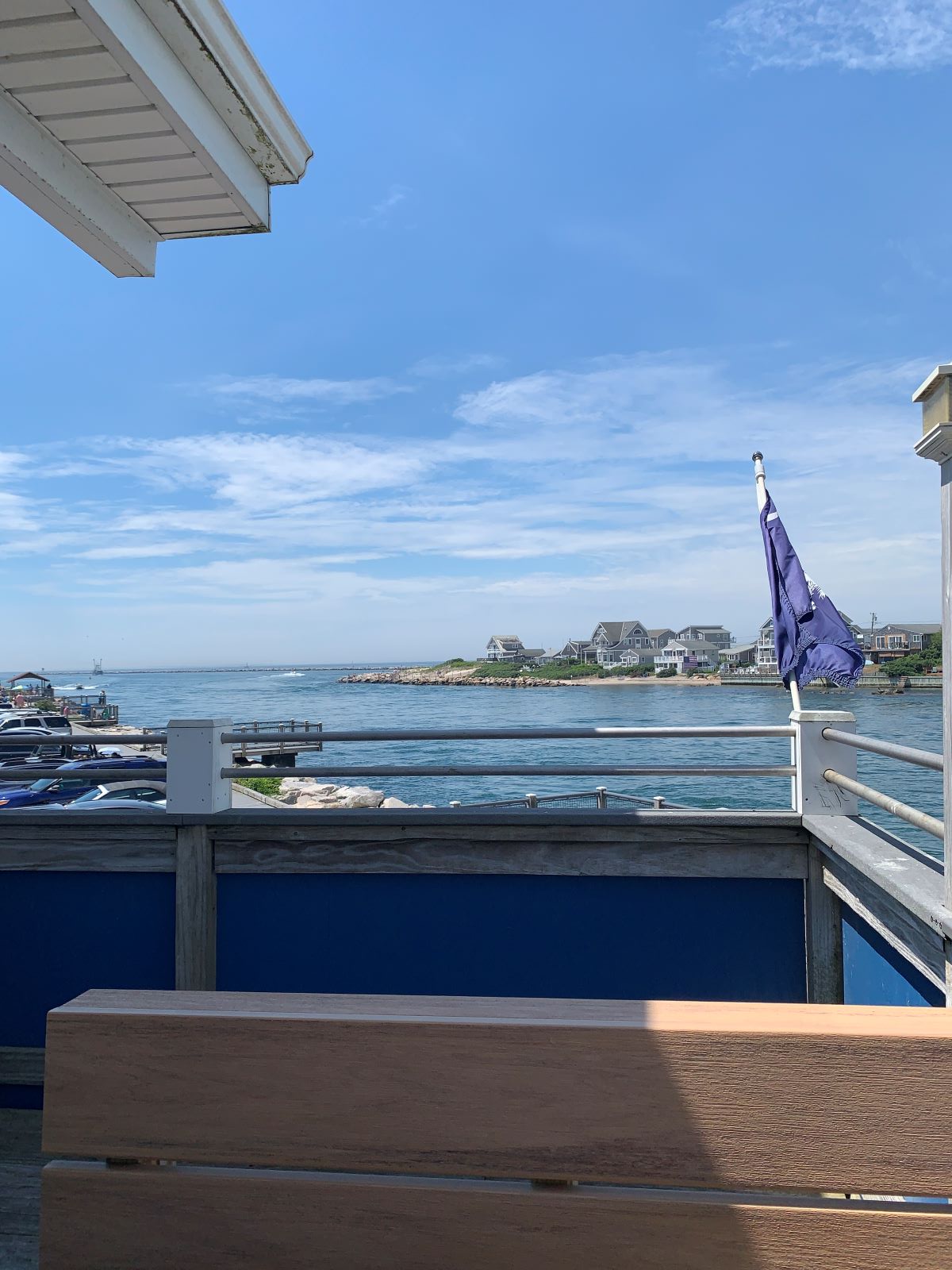 Dining al fresco at Champlin’s Seafood in nearby Narragansett, RI

Given a certain disinclination to make use of public restrooms right now if I can avoid them, we opted to stop on our way at Champlin’s Seafood, which is in nearby Narragansett. Donning our face masks, we headed up to the restaurant on the second floor to find traffic flow in this casual eatery to be carefully directed, replete with helpful arrows on the floor and taped off areas. We ordered at the window and had to enter our contact information on a sheet.

Note to travelers in this new world order: Maximum precautions sometimes yield to system fails when it comes to writing instruments. You probably don’t want to use a pen or pencil that 20 other people have touched. Bring your own!

We opted to sit outside on the deck to watch the boats go in and out of the Port of Galilee while we ate. At the time of our visit, every other table was taped off, both inside and outside, making social distancing pretty easy. There were few diners in the restaurant anyway when we had lunch there. We felt comfortable and safe.

Where to stay when visiting Newport

The majority of guest rooms at Bannister’s Wharf feature world-class views from the wharf of the same name, but, because there are just a handful of them, scoring one can be a challenge during the busy summer tourist season. Even with things as they are, I was too late.

Because this road trip to Newport was a last-minute idea, I was also too late to book one of my preferred rooms at Castle Hill Inn. I was even too late just to book a time to sit out on the lawn and drink cocktails and have one of the best lobster rolls in the world while also enjoying some of Newport’s prettiest scenery. Next time. 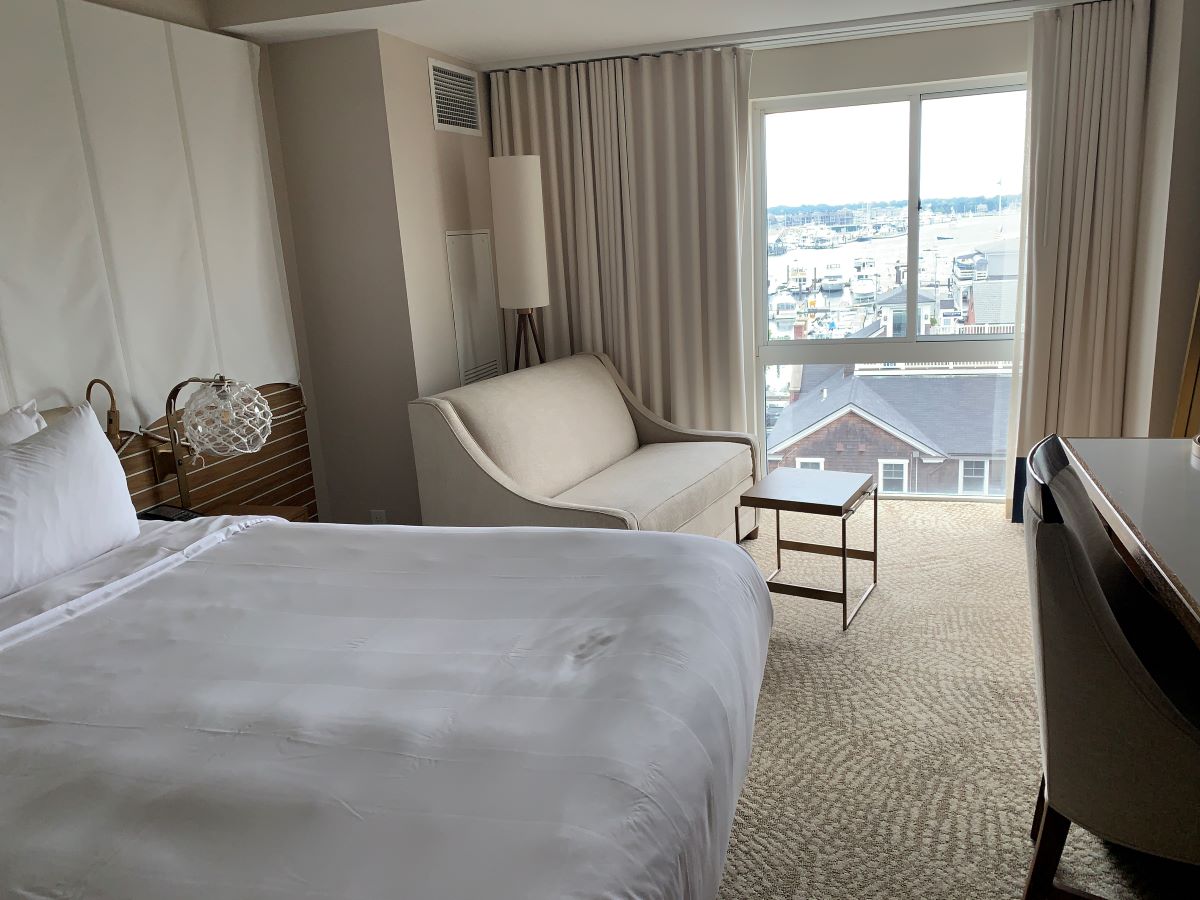 A guest room at the Newport Marriott

Check-in at the Newport Marriott

Ultimately, we opted for a room with a water view at the Newport Marriott, which is about a five-minute stroll from Bannister’s and Bowen’s wharves, where all of our eating, shopping and bay-watching  plans centered on this particular venture.

Renovated about five years ago, this hotel on America’s Cup Avenue features plenty of natural light in its vast atrium, and its decor brings to mind elements of boats and the sea. What looks like sails separate indoor balconies. An interior fountain surrounded by hanging chairs provide a watery feel.

Despite arriving in high season at the end of June, the lobby seemed largely empty—a sign of the times. As a member of the hotel’s loyalty program, Marriott Bonvoy, I probably could have done a mobile check-in on my phone app, but I opted for the conventional approach at the front desk, where I was greeted through a plexiglass barrier by mask-wearing staff, who reviewed the house rules with me. Basically: Wear a mask and maintain social distance. Only four people were allowed in the elevators at any one time.

Our room, with a seating area looking out toward Narragansett Bay, proved perfect both for snoozing and for sipping some wine before we ventured out for dinner.

The onsite spa, open with a more limited capacity when we visited, could not accommodate us. That’s all the more reason to visit Newport again soon. 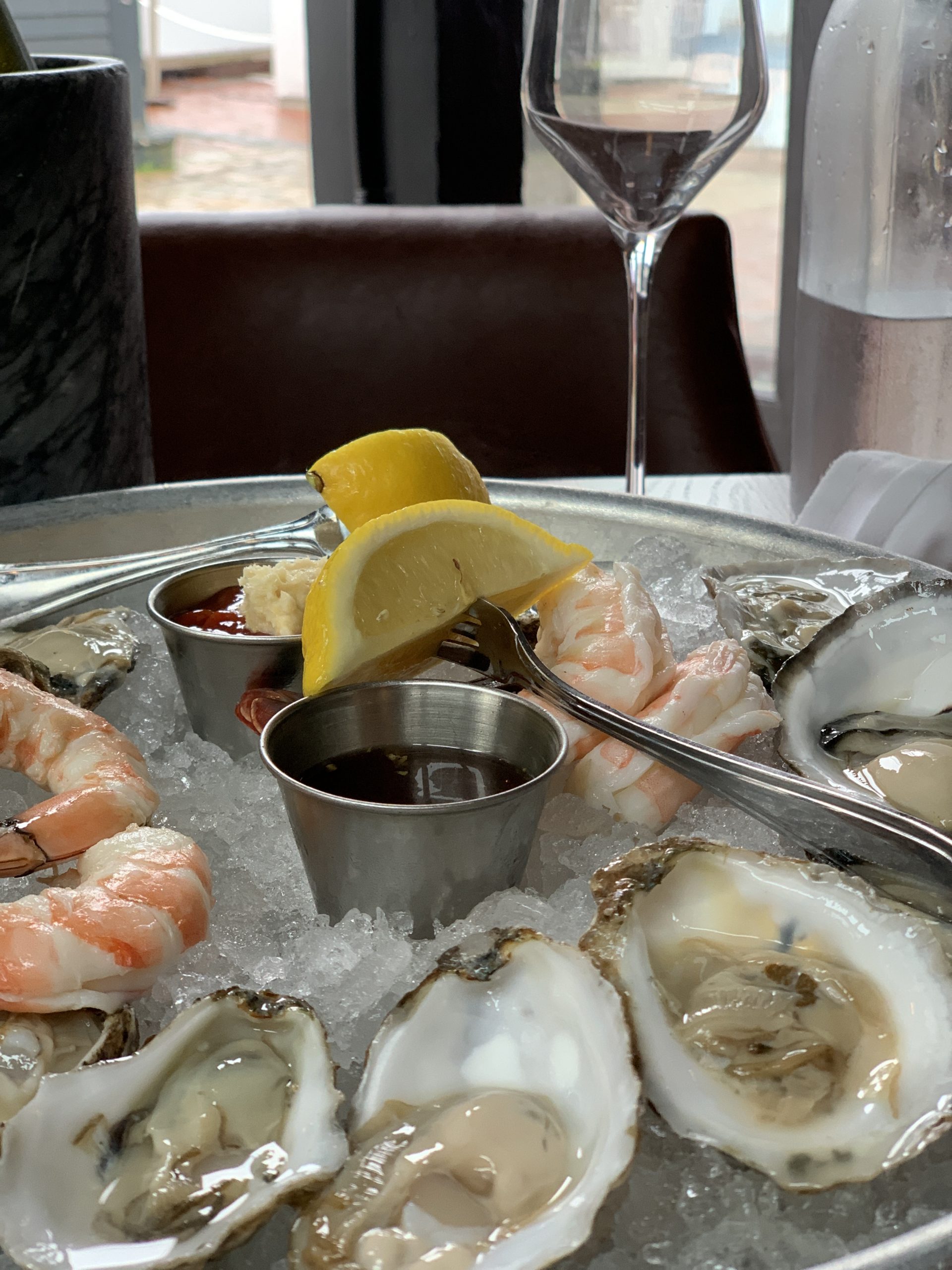 A Newport visit for sea-foodies

Stopping in at any of Newport’s well-known restaurants for a drink or a bite necessitates reservations these days. With restaurants limiting the number of diners in their establishments, that means reservations can be hard to get at optimal times.

Only able to score a reservation slot for an early dinner at 22 Bowen’s Wine Bar & Grille, we took a leisurely stroll before heading to the restaurant’s host stand, which is in an outdoor area. Asked if we preferred an outdoor table or an interior one, we opted for an indoor one due to impending rain.

Servers and other staff wore masks, tables were spaced far apart, and the dining area in which we were seated had an opening to the outside world—which made us feel as if we would still get plenty of fresh air. We accessed the menu via our smartphones, but paper ones were also available.

Soon, we became ensconced with cocktails and oysters and warm lobster rolls. We should not have ordered the truffle mac & cheese with lobster, but we did anyway and loved it. So we only had room for a bit of sorbet for dessert.

We felt safe here, even more so when we saw staff members spritz and wipe chairs and tables from top to bottom after customers left.

Impending rain prevented us from going on any kind of boat rides, but we were able to watch various cruises come in to dock. We were heartened to see people wearing masks and social distancing on boat decks. Others who plan to go on a public sail should definitely book ahead.

We tried to stop in at the Black Pearl’s outdoor patio for an after-dinner drink but lacking a reservation, there was no room for us. We headed back to our hotel to finish the wine we had brought along.

The next morning, after a contactless checkout from the Marriott via my Bonvoy phone app, we walked to Coffee Grinder on Bannister’s Wharf. Customers managed to wait in line while socially distancing, despite the relatively small space available to them. We found the coffees and the view worth it, though.

After some therapeutic shopping, we headed to the Clarke Cooke House, where we had a brunch reservation. Here, too, the host stand is outside. Although there was no line when we arrived, patrons later did line up while maintaining social distancing.

Walls of open windows in the restaurant allow plenty of fresh air in. We felt safe seated on the upper level next to a window. Tables were placed far apart, and servers wore masks and gloves. Only one person was allowed at a time into each restroom.

We felt secure here, too, a feeling that allowed us to enjoy mimosas and Bloody Marys before moving on to oysters followed by New Orleans poached eggs (poached eggs on Cajun-spiced crab cakes). Bliss. 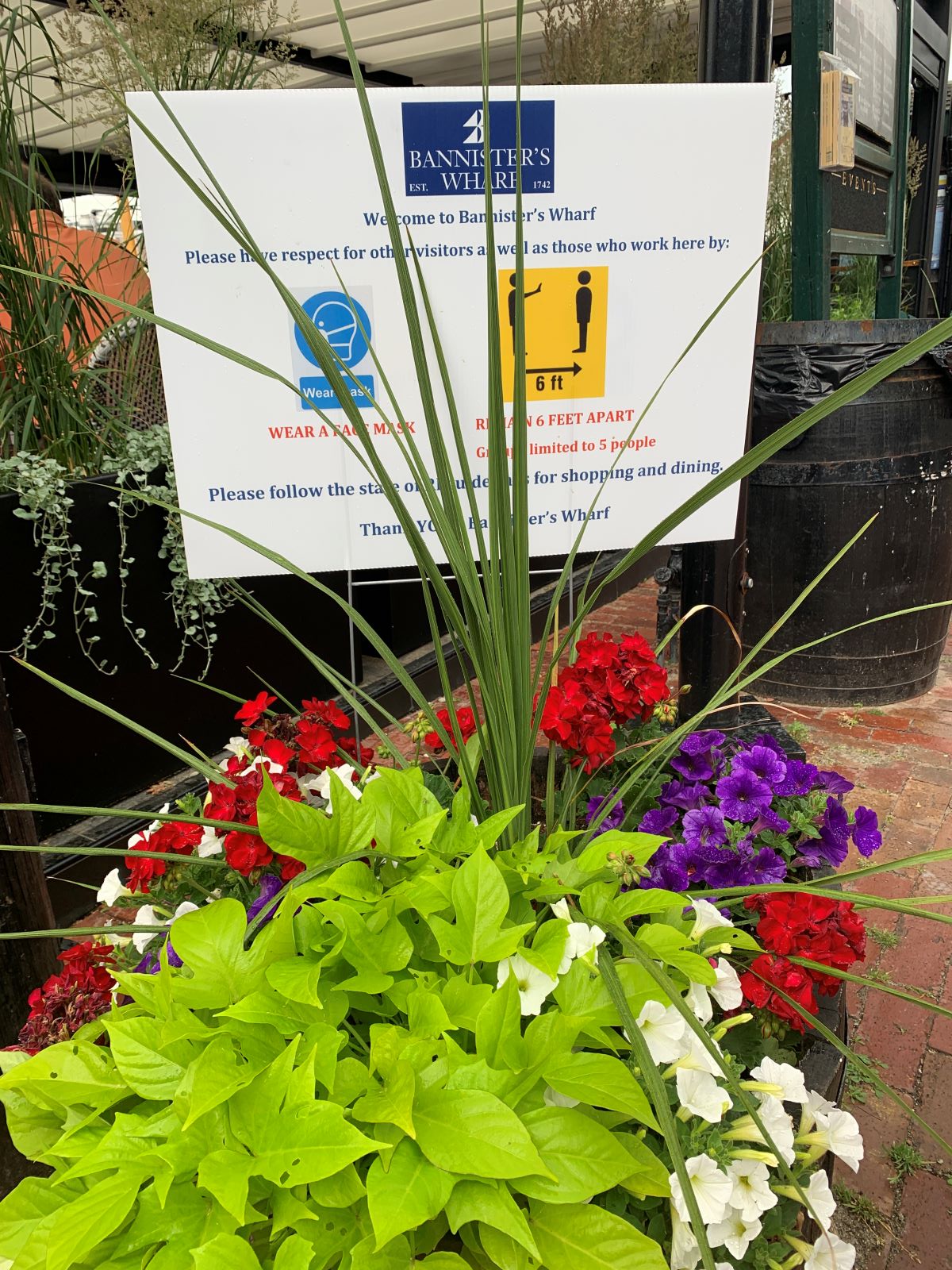 Afterward, we indulged in more recreational shopping and window-gazing at the cute stores in the vicinity of Bannister’s Wharf and Bowen’s Wharf. During our visit, stores were limiting the number of shoppers and requiring masks.

I bought an armload of books on Newport history at the Newport Mansions store and some body butter and a sophisticated sweatshirt made out of very thin material at Soap & Water Newport. It felt good to get out and about, and to use some disposable income to help small businesses survive this most scary moment. 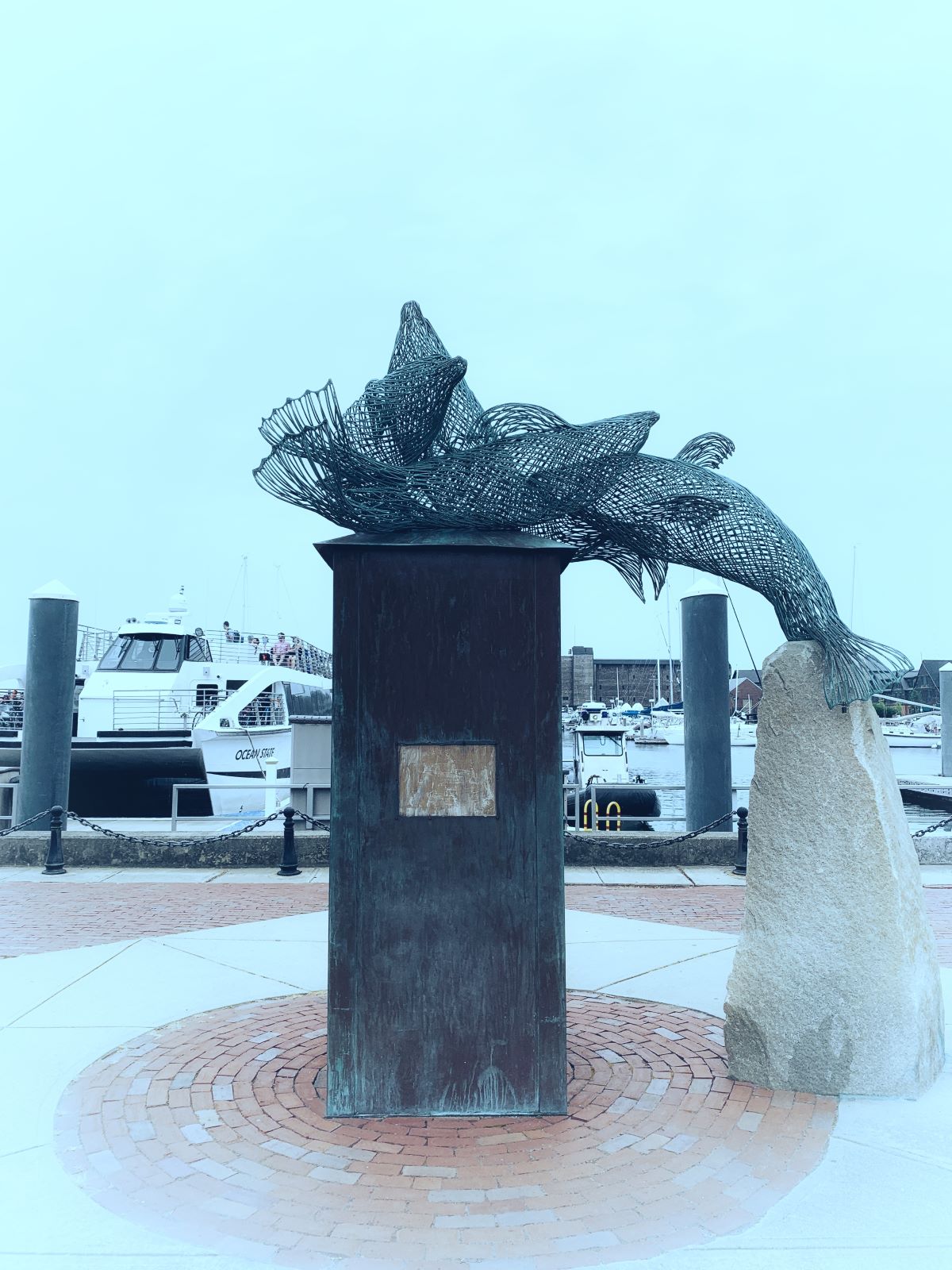 A sculpture of a fish in M. T. Perrotti Park

Editors’ note: This is one in an ongoing series of close-to-home road trip suggested by our GOT Contributors. 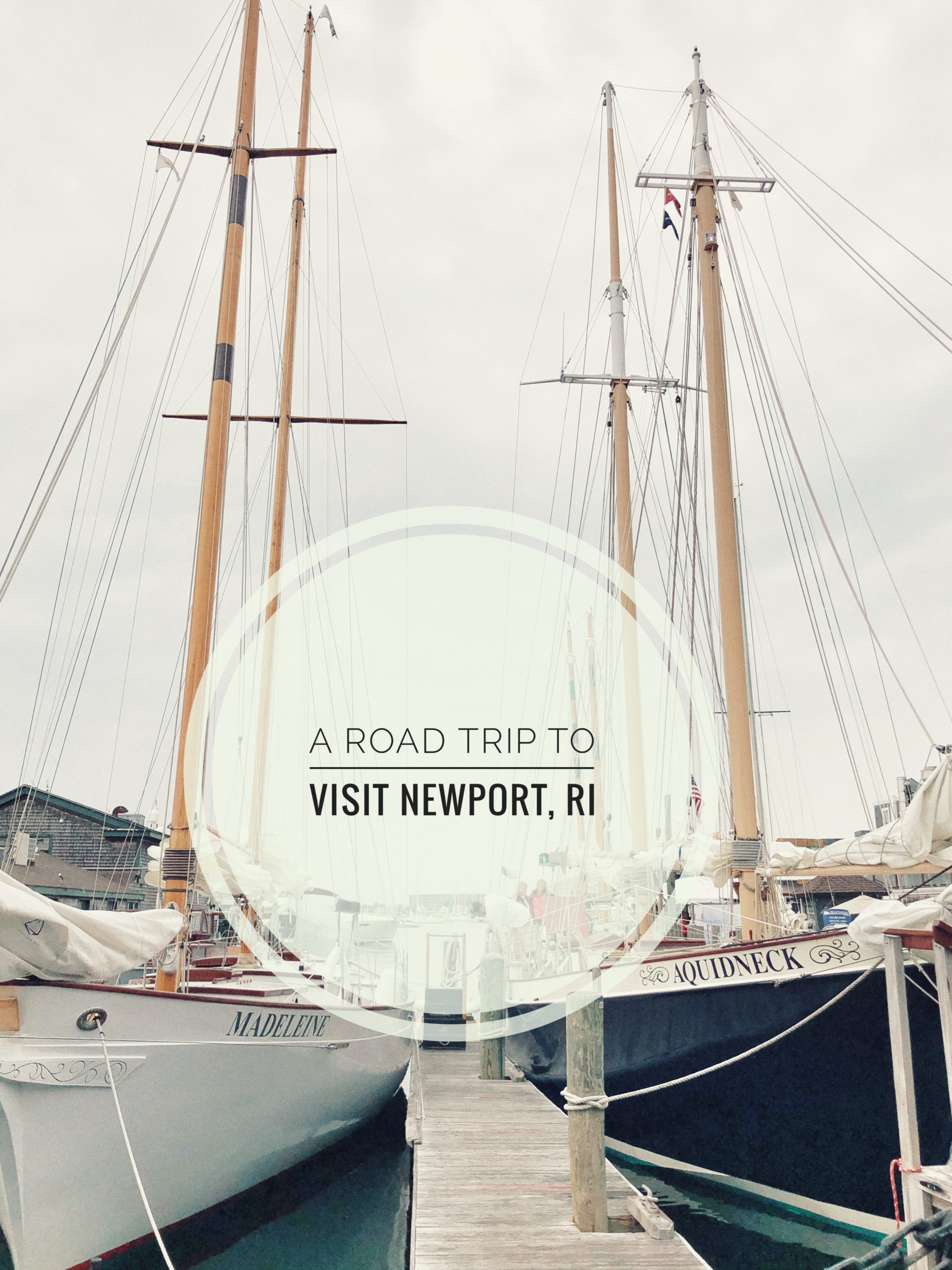