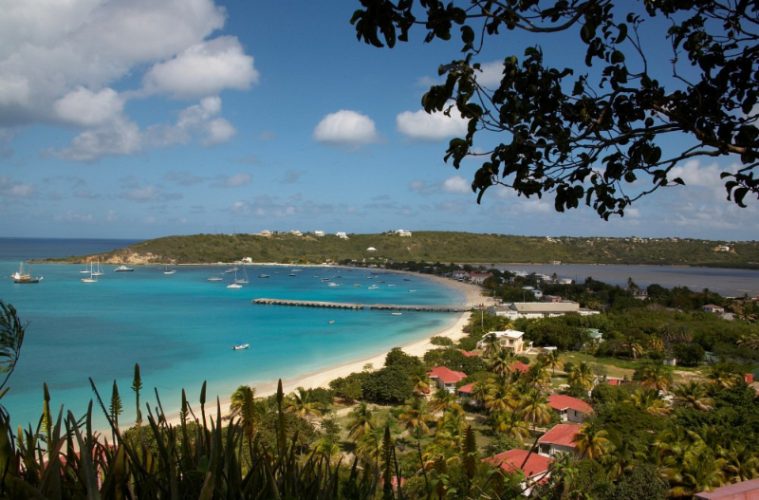 Anguilla is just far enough off the beaten path to have acquired a reputation as an upscale haven.

It does have an airport, but it isn’t big enough to handle larger jets, so most visitors fly into neighboring St. Maarten and take a half-hour boat trip to Anguilla. It’s a minor inconvenience – drivers from the charter boat companies pick travelers up at the St. Maarten airport for the five-minute trip to the ferry dock – but it’s just enough of a hiccup to dissuade a lot of people.

Perhaps that’s one of the reasons that Anguilla attracts privacy-seeking celebs such as Liam Neeson, Paul McCartney, Beyoncé and Jay-Z.

The excellent hotels probably don’t hurt, either. Home to one of only two Four Seasons properties in the Caribbean (the other is on Nevis), Anguilla is no stranger to luxury accommodations. However, two new luxury hotels in Anguilla are well set to compete with the established players. In fact, one is even owned by an established player.

The Reef by CuisinArt

“Modern” and “glam” are the two adjectives that most quickly come to mind to describe The Reef by CuisinArt, a member of Small Luxury Hotels of the World, which opened on Merrywing Bay in November, 2016. The lobby glitters with gold accents and marble. The suite bathrooms have standalone oval tubs. Tivoli Audio sound systems sit on bedside tables.

It’s all very sleek and urbane. 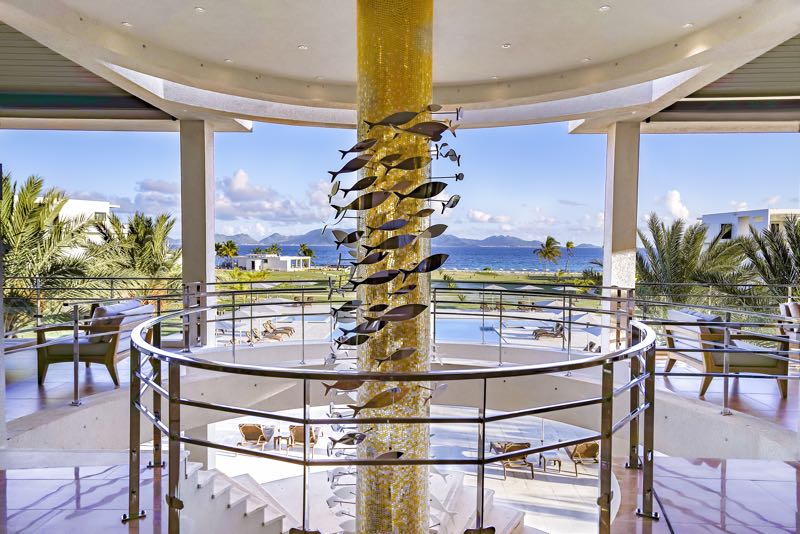 Glittering lobby at The Reef by CuisinArt offers a view of the grounds, the pool and, in the distance, the beach (Credit: The Reef)

For such surroundings, you’ll want some chic beachwear. Luckily, you could bring half your wardrobe to the Reef and store it with ease.

The walk-in closet in my 800-square-foot beachfront junior suite was about the size of my bedroom at home and came equipped with a bench, a full-length mirror, motion-triggered lighting and a Conair clothes steamer.

(That last item was a particularly smart bit of marketing; Conair owns the CuisinArt brand, and its gadgets are found throughout the resort. Once I’d tried the steamer, I wanted to buy one when I got home.) 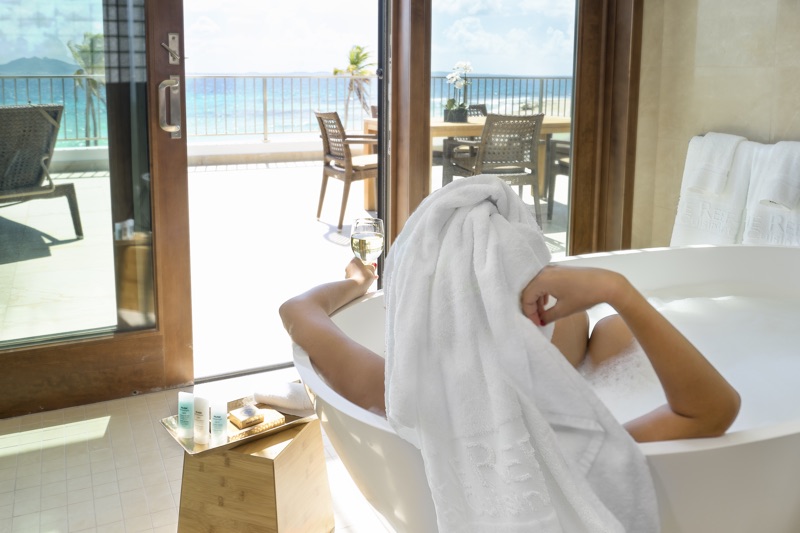 In a deluxe beachfront junior suite at The Reef by CuisinArt, you can admire the ocean while having a bath (Credit: The Reef)

The 80-unit hotel features 50 non-balcony suites in a mirrored glass tower that looks a bit as though it has been transplanted from suburban New Jersey. I’d recommend spending the extra money for one of the 30 suites, each with a balcony or terrace, scattered throughout four low-rise buildings closer to the beach.

Not surprisingly, the food at a hotel owned by a company that makes kitchen appliances is excellent. I’m still thinking about an unusual but fabulous appetizer of peekytoe crab served on a funnel cake with old bay spice and lemon aioli at the Reef’s Yacht Club restaurant.

The fish tacos I had the next day for lunch at the Reef’s beachfront Breezes restaurant, on the other hand, were a bit soggy. However, a brilliant salad of cherry tomatoes, basil and mozzarella drizzled with basil oil – along with the stunning seaside location – more than compensated. Produce used at the Reef comes from the hydroponic greenhouses it shares with its parent hotel, the CuisinArt Golf Resort & Spa. Guests at the Reef also have access to the multiple restaurants at the larger property. 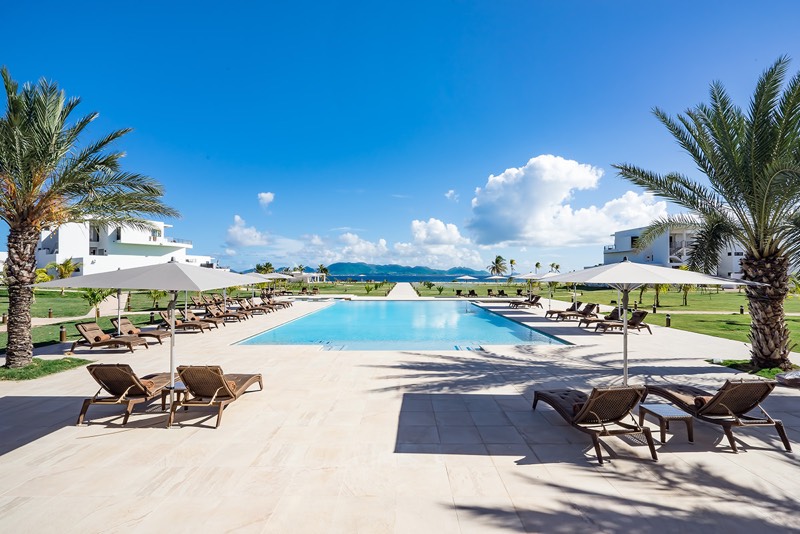 This pool at The Reef by CuisinArt is great for sun worshippers (Credit: The Reef)

To work off all that food, you can swim lengths in the elegant pool or try some of the complimentary watersports, including paddleboarding, snorkeling and kayaking.

The other relative newcomer on the island is Zemi Beach House Resort & Spa, which opened on Shoal Bay East in February, 2016. While just as luxurious and enjoyable as the Reef, it is its polar opposite in many respects. 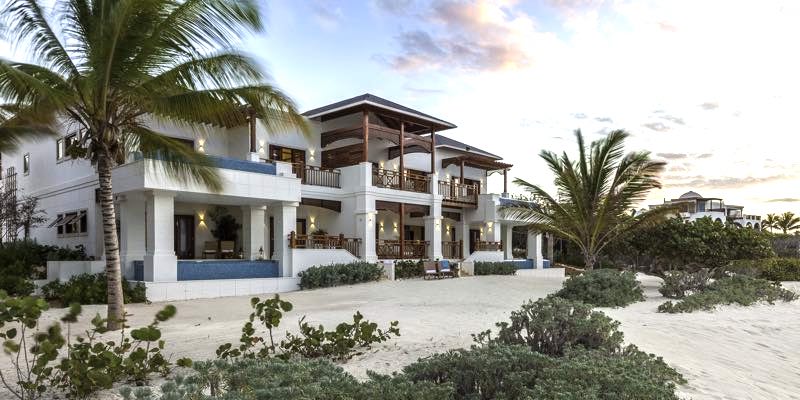 In contrast to the Reef’s golden accents and largely open site, Zemi Beach seems more like a hilly opulent village that has grown organically from its green surroundings. (The 73-unit property took six years to build, so the landscaping is already quite lush.) Neutral-toned building materials and textiles – natural woods, cotton, rattan – create a soothing tactile environment, inside and out.

Nowhere is that more apparent than in the resort’s spa, created from a 300-year-old Thai complex that a previous owner of the site bought, took apart and rebuilt on Anguilla almost two decades ago as a private home. 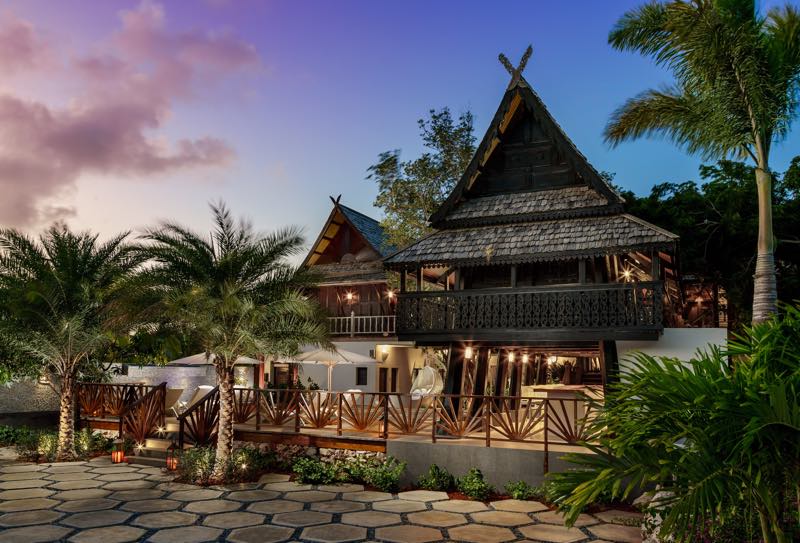 Elevated wooden walkways, shingled roofs and mahogany accents make the spa feel like a posh tree house. The five treatment rooms, each with a private shower, are large and airy.

Therapists offer facials, massages, body treatments, manicures and other choices; I opted for the 50-minute grapefruit and rosemary muscle melt, a combined deep tissue and hot stone massage. I also tried the Taino bathing ritual, complimentary with any other spa treatment. The three-step experience started with a few minutes in the marble hammam (steam room). 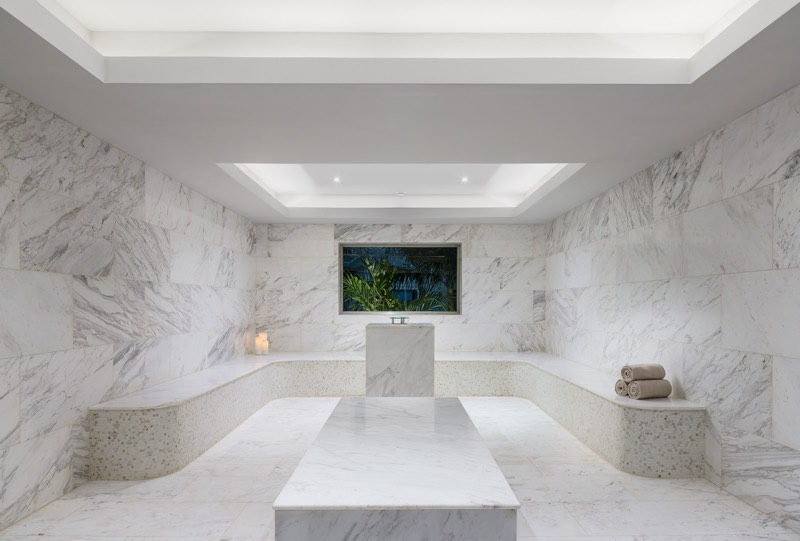 Next, I slathered myself with minty mud and slow roasted in the sun, then washed away the dried mud in the outdoor shower. The final stop was the vitality pool, where – after stubbing my toe on the pebble-tiled steps – I willingly let the warm water and jets lull me into a sleepy, Zen-like state. 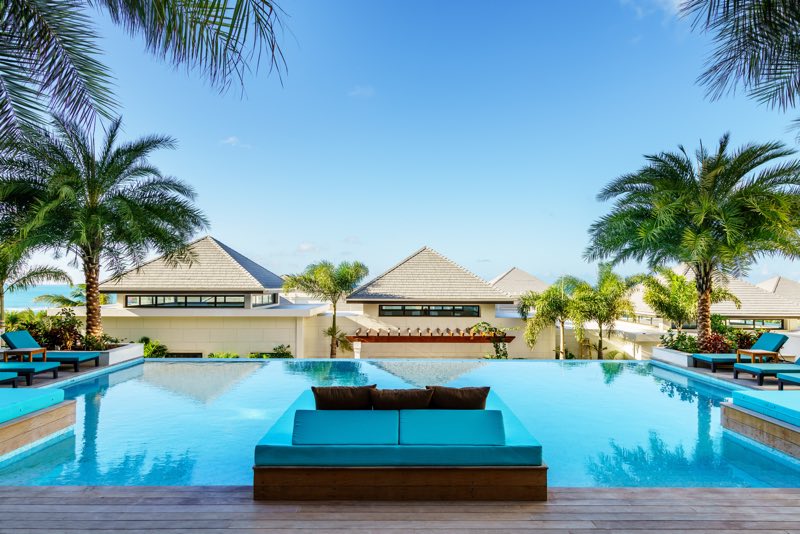 Not surprisingly, the poolside hammocks were tempting, but I had to leave the spa to avoid missing dinner at Stone, the resort’s fine dining restaurant. And that would have been a huge loss, because I’d been eager to go back after devouring some delicious chili-orange-glazed salmon with coconut rice there earlier in my trip. I wasn’t disappointed the second time, either.

Eventually, relaxed and stuffed, I ambled back to my room. Classified as a “premium room with ocean view,” it was slightly smaller than my huge digs at the Reef, but as it measured about 650 square feet, I had no complaints. After snuggling into a Frette robe, I lingered on the balcony for a few minutes, admiring the low-slung rooflines of the resort and the glimmering Caribbean Sea beyond.

I’ve been lucky enough to visit many tropical hotels over the years, but this one ranks among my favorites.

If I ever win a very large lottery someday, I’ll simply move in and never leave. After all, a girl can never have too many rosemary-grapefruit massages, right?

About Anguilla previously on GettingOnTravel:

The author was a guest of the Anguilla Tourist Board, The Reef by CuisinArt, and Zemi Beach House Hotel & Spa. 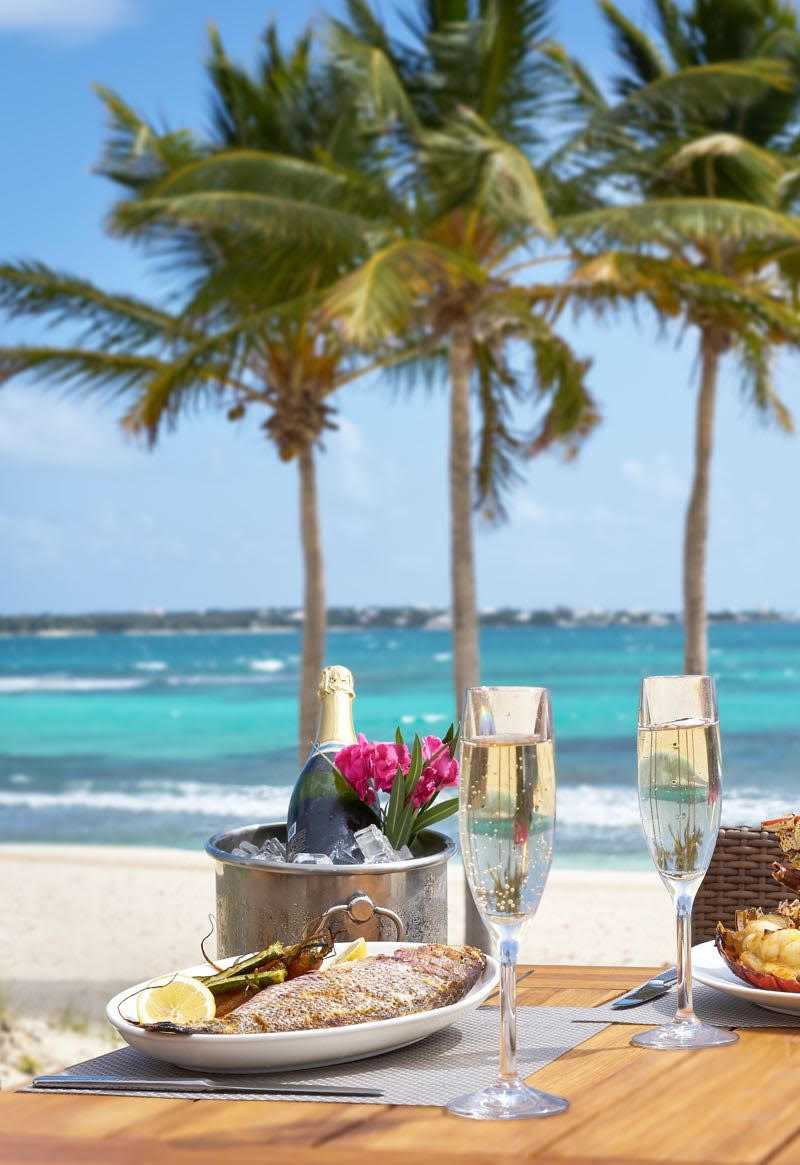 The Breezes restaurant at The Reef by CuisinArt opens directly onto the beach (Credit: The Reef)