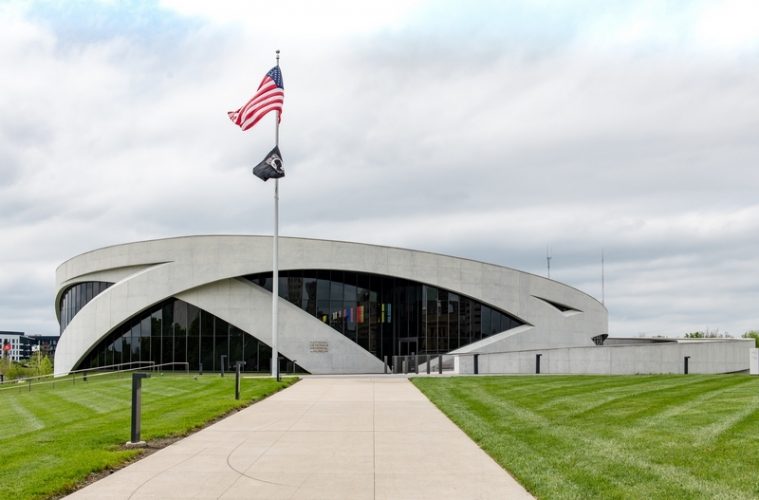 National Veterans Memorial and Museum in Columbus, Ohio: Dedicated to All Vets

An inscription in the National Veterans Museum and Memorial reads:

Since the nation’s founding, millions of Americans have answered the call of military service. Along with the families and communities that stood behind them, they have sacrificed for their country, their cherished principles, and their fellow servicemen and women. From induction to discharge and beyond, veterans have followed time-honored paths of duty and service.

Until recently, military veterans lacked a single monument or museum dedicated to their experience, no matter which branch of service they served in or which war: World War II, Korean War, Vietnam or the latest operations in Afghanistan and Iraq.

That changed with the official opening of the National Veterans Memorial and Museum in Columbus, Ohio, on October 27, 2018. Officially designated by the Federal Government, its entire focus is to honor the sacrifices of all veterans and services whether past or present, separated or retired.

A very personal visit to the National Veterans Memorial and Museum

I happen to be one of more than 20 million living veterans who proudly served our country in both the Navy Reserve enlisted and officer ranks for almost 27 years. However, there were times when our service wasn’t appreciated, such as in the aftermath of Vietnam when we weren’t permitted to wear our uniform to or from our place of duty because of incidents of public hate. It was a sad time for our country when people spat on the uniform. But most of us endured the public distrust, never wavering in our commitment to serve. 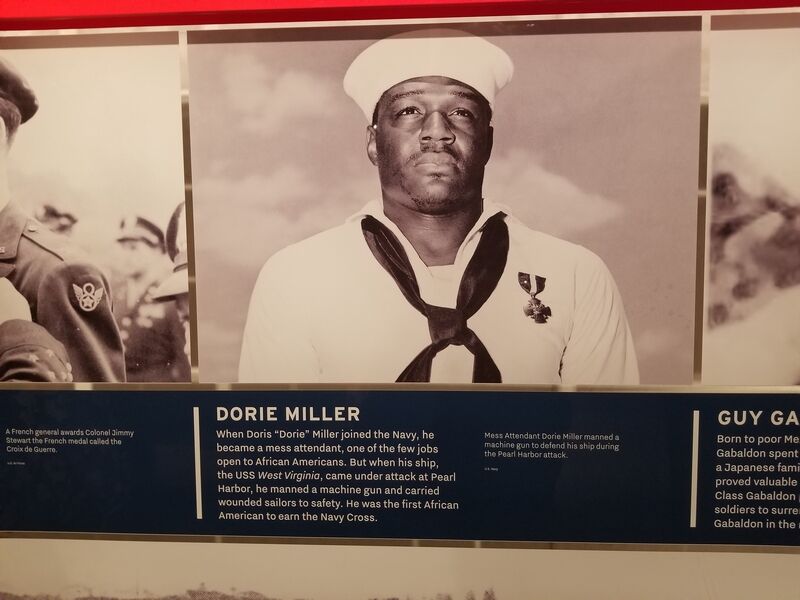 A photo of Dorie Miller, the first African American to earn the Navy Cross

I didn’t know about the National Veterans Memorial and Museum until recently, when I had an opportunity to visit Columbus this spring. After touring the facility on two separate occasions, I strongly encourage anyone who wants to support veterans to visit and pay respect to the countless sacrifices given by those who served to support our democracy.

Discovering all it offers

The building’s sweeping design and organic verticality command attention. It seems to draw strength from the ground and yet be expansive in its reach. Built by Allied Works Architecture, it presents with an iconic concrete arch structure crafted with 28 million pounds of concrete, a glass curtain wall, and a staircase spiraling to a rooftop sanctuary. 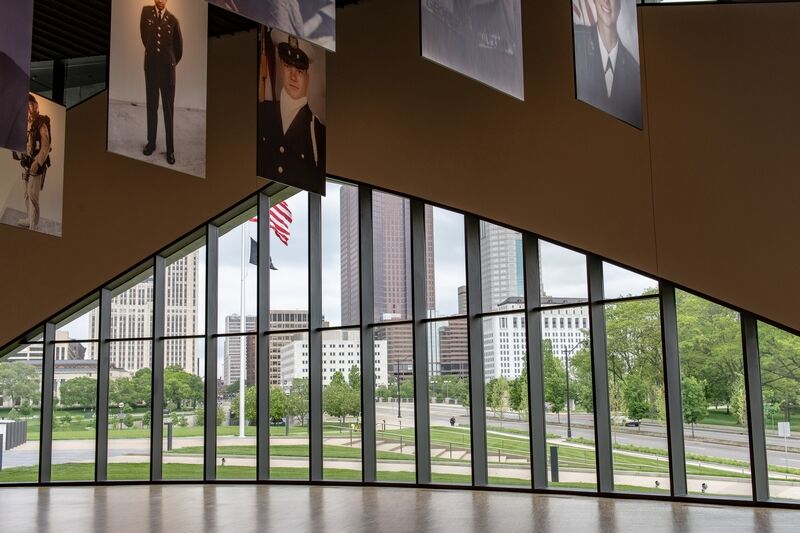 Once inside, visitors embark on a narrative journey on what it means to serve – from answering the call to life after service. 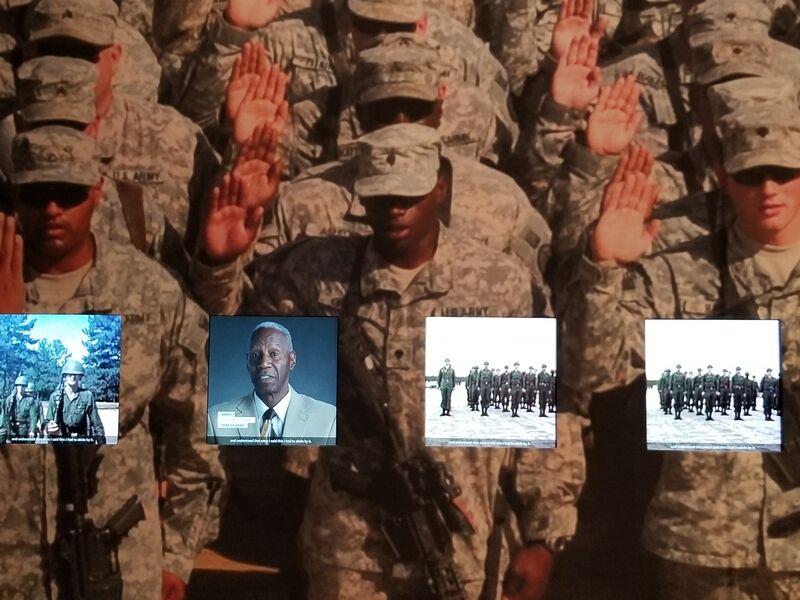 Narrative exhibits begin the journey with the oath to serve

The exhibits and experiences take on personal meaning through artifacts, quotes, letters and the words of veterans. Though the stories are personal, the experiences are collectively uniform because of a shared brotherhood and sisterhood in arms. 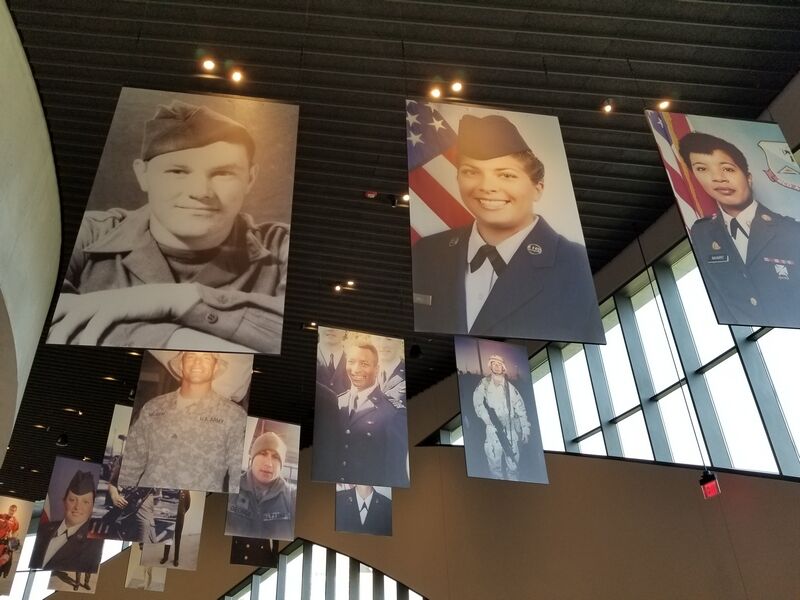 Individual profiles of those who served hang from above

Don’t miss the second-floor mezzanine with a Memorial Room that honors our fallen heroes. For veterans who may have stories that still need to be told, there is a recording booth where they and their families may share personal perspectives. This includes the many experiences of veterans, active-duty personnel, military families, and civilians.

When visiting the Memorial Room, I shed a secret tear thinking about my best friend, a retired Marine Corps Gunny Seargent who served several tours in Iraq. Nowadays, she suffers from untreated PTSD while living a life more in the past than the present. She is one of the real heroes, serving on the front line while I work from the safety of five walls in the Pentagon. It’s people like her I salute, yet wonder why we can’t do more for her now that she’s stateside. That’s a story I would like to see and hear more about.

I also reminisce about my dad, a young Marine serving toward the end of WWII. Though he lied about his age to serve, being only 16 at the time, he grew a lifetime during his service. He left with shrapnel wounds, eventually being awarded the Purple Heart for his combat injuries. (It proudly hangs on my office wall). I wish he were here to record his story.

Before leaving the museum, step outside to the landscaped 2.5-acre Memorial Grove. Here visitors may reflect, remember, and be inspired by those who fought for and served our country.

Disclosure: The author was hosted by Columbus, Ohio, and the National Veterans Memorial and Museum to experience and write about the destination. Any opinions expressed are strictly those of the author. 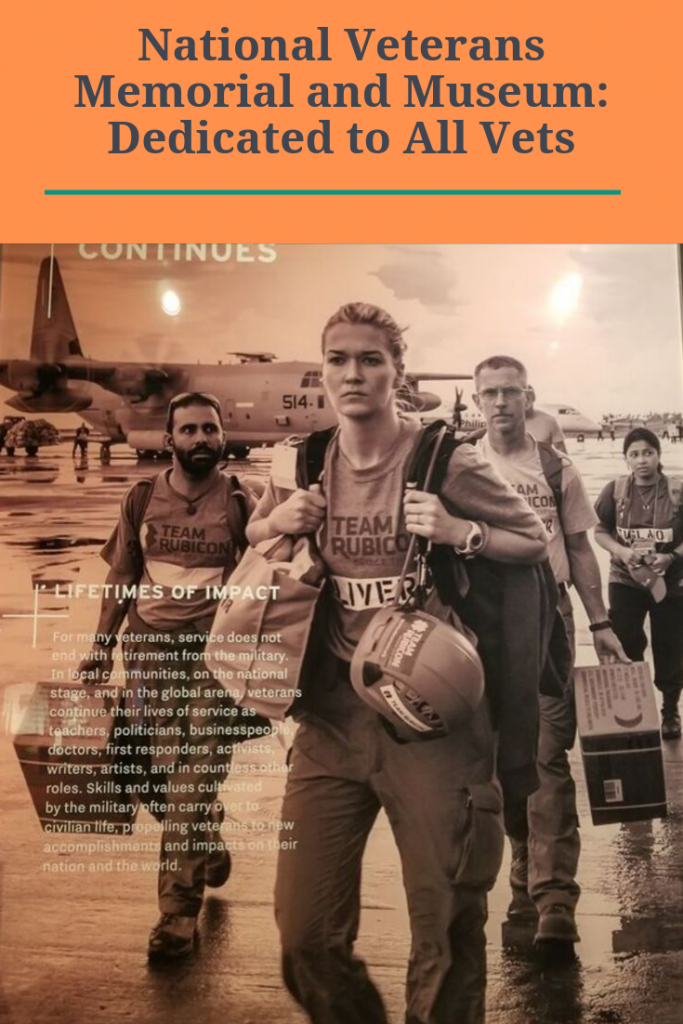