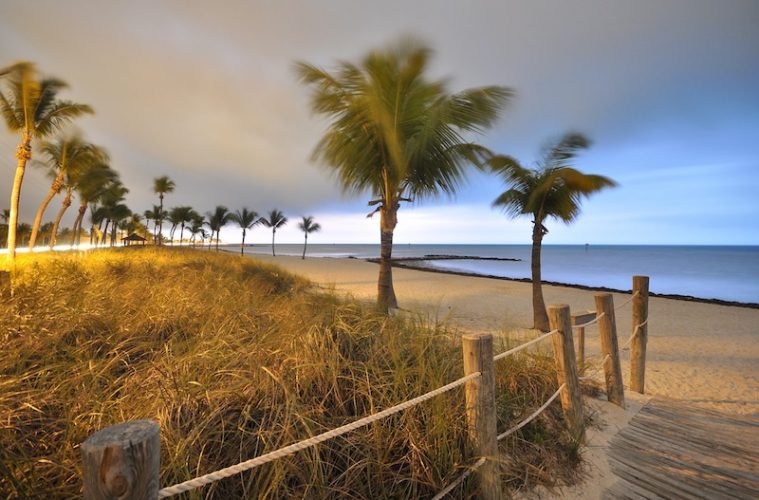 A Multigenerational Reunion in Key West Offers Much to Love

When picking a spot to celebrate my parents’ 65th wedding anniversary with a family reunion, my siblings and I knew the criteria we were searching for: warm weather, beaches to satisfy the cravings of some of us former Floridians who now live landlocked up north, plenty of things to do for people of various ages, and lodgings big enough to accommodate us all.

Our multigenerational group included 26 people, ranging in age from 16 to 100.

Why we chose Key West

It didn’t take long to settle on Key West. My parents had met and married in Florida, four of their five children were born and/or had lived there during formative years, and we have relatives living in the Sunshine State. But the clincher was that through one of the many vacation home rental agencies that serve Key West, we found a “compound” that could accommodate all 26 of us in a main house with a large living room, cottage and two condos centered on a swimming pool. 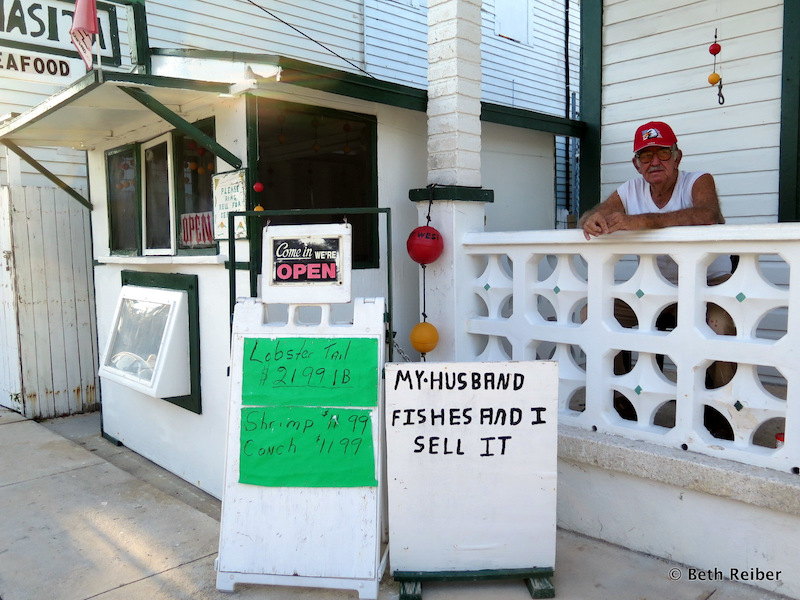 Luckily, Hurricane Irma, which struck the Keys on September 10, 2017, did not cause major damage in Key West (Unfortunately, other Keys were not so lucky; for an update see Beth’s report, Florida Keys Still Recovering.)

It turned out, our one-week, multigenerational trip to Key West over the Christmas holidays couldn’t have been more perfect. Our lodgings were in a residential neighborhood, filled with clapboard houses of various shapes and sizes with bougainvillea, palm trees and other tropical plants lining narrow streets. 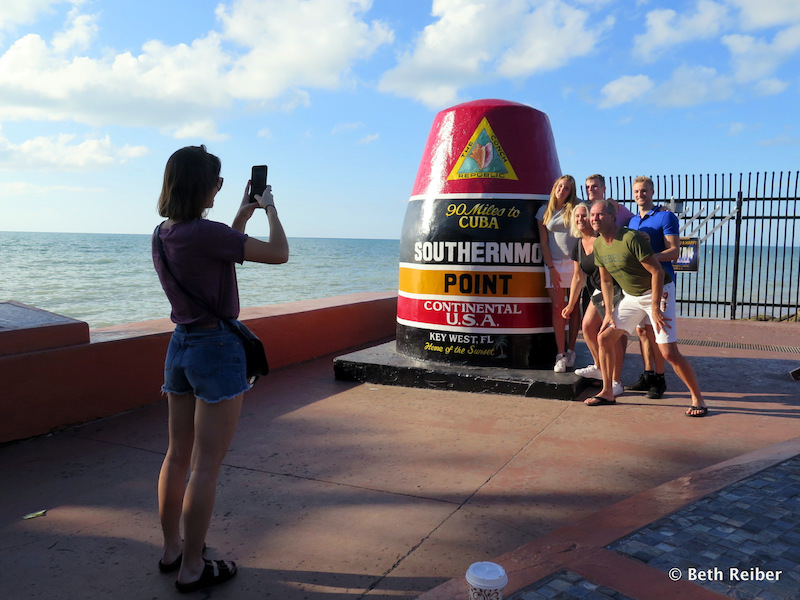 The constant crowing of roosters, which I find endearing, must surely be the emblematic trumpeting of the Conch Republic, a self-given name that dates back to 1982 when Key West declared independence from the United States.

Staying in houses instead of a hotel made us feel part of the community.

Because we had four kitchens among us, we assigned nights for home-cooked meals when we could gather as a family, but we also celebrated our parents’ anniversary with a dinner out and left one night open (my three sisters and I had our traditional sisters’ night out, hitting four bars for drinks and appetizers and then Uber-ing home).

An abundance of things to see and do

Our days were mostly spontaneous and always full. My father and his 100-year-old sister opted to hang out most days on the porch overlooking the pool, reminiscing about childhood, reading the newspaper and visiting with family members heading out and returning from excursions.

Our lodgings were a 20-minute walk or short bike ride from the action of Duval Street with its many shops, bars and restaurants, with nearby Mallory Square the place to be for evening sunsets and street performers. 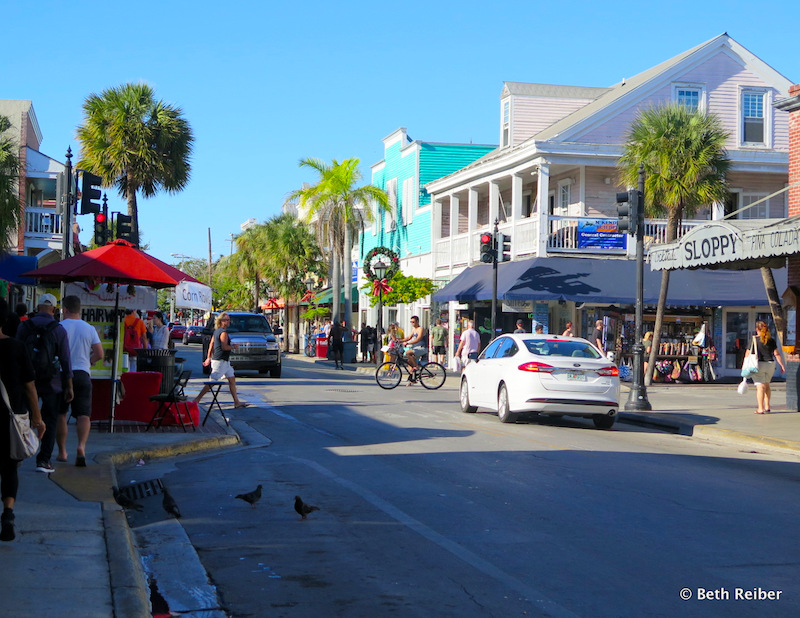 We also loved Fort Zachary Taylor Historic State Park, which contains not only a fort but also Key West’s best beach, and my cousin and I spent an hour in the Key West Cemetery, where we found the tombstone that complained, “I told I was sick.”

My mother enjoyed the Harry S. Truman Little White House, used by our 33rd president as a winter residence from 1946 to 1952 and where we saw rooms where Truman slept, worked, played poker and entertained friends. My 20-something-year-old sons were fascinated by the Mel Fisher Maritime Heritage Museum, which tells the amazing story of how Fisher and his family spent 16 years searching for the Spanish ship Atocha that sank in 1622, and then spent another eight years battling federal and Florida governments over the right to keep the treasures (the US Supreme Court gave ownership of the Atocha’s treasures to the Fishers), many of which are on display in the museum. 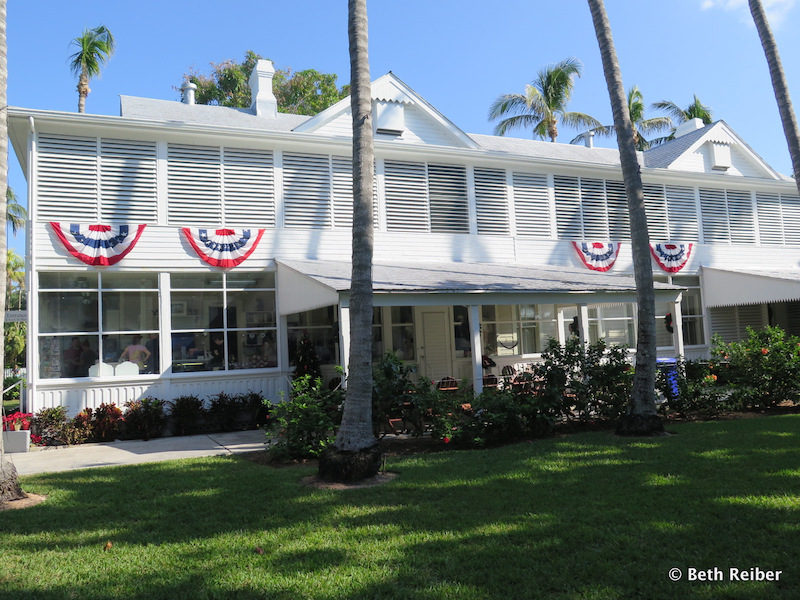 Key West’s top attraction, in my opinion, is the Ernest Hemingway Home and Museum, where the author and his wife Pauline lived from 1931 to 1940.

The home is much larger and grander than I’d imagined. Aren’t most writers poor? 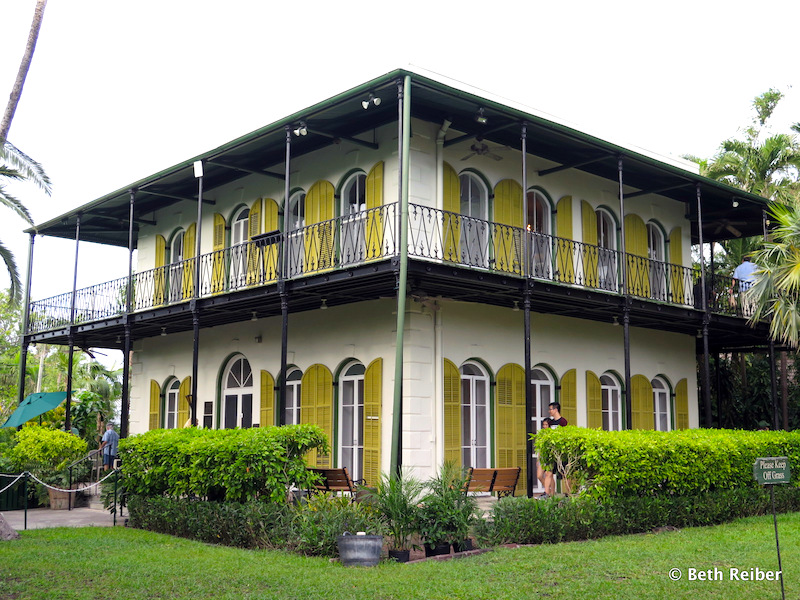 Turns out, Hemingway’s wife’s uncle purchased the home for them. It contains the family’s furniture, personal items and decorative objects, chandeliers imported from Europe, photographs of Hemingway’s many fishing trips, trophy mounts and skins from his African safaris and his 1932 Royal typewriter. The house and gardens are also home to some 40 cats, descendants of Hemingway’s beloved six-toed cats. 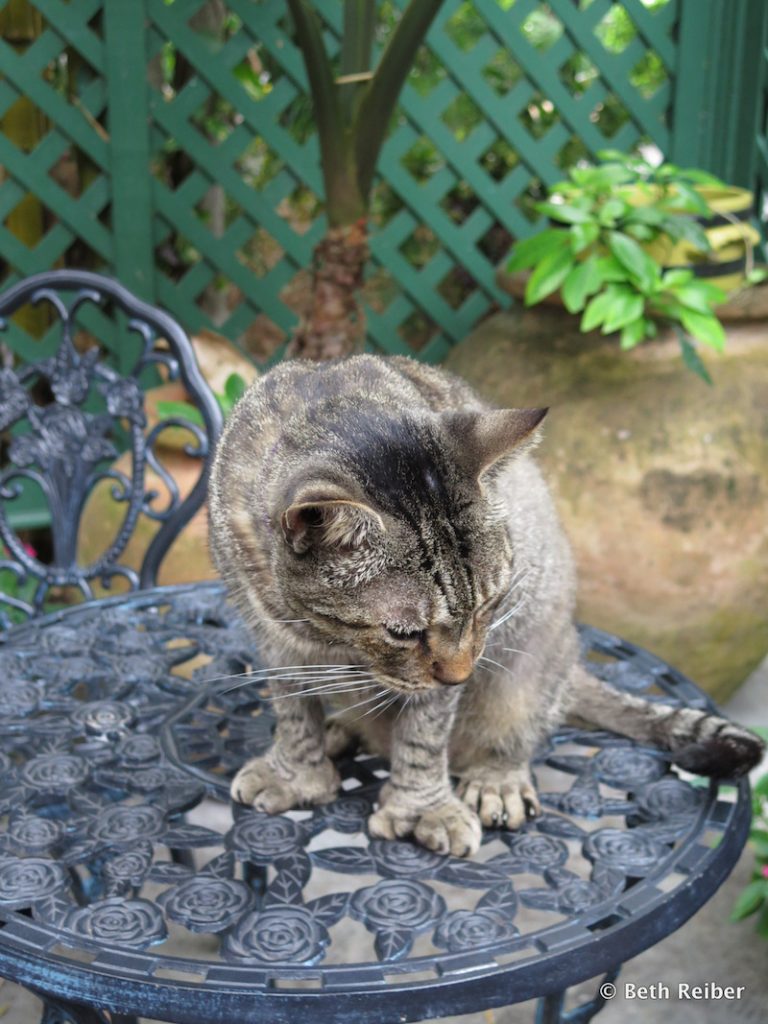 All the cats at the Hemingway House carry the gene for six toes, although not all show the trait

Although I’d read Hemingway’s most famous novels, including, The Sun Also Rises, A Farewell to Arms, For Whom the Bell Tolls and The Old Man and Sea, I hadn’t known much about Hemingway’s personal life. Our guide regaled us with stories related to the many objects and rooms in the house, tales about the author’s alcoholic bouts around town, and anecdotes about his life in Key West with wife number two (he was married four times).

The guide told us that after receiving more than 20 rounds of electroshock therapy at Mayo Clinic as a treatment for depression, Hemingway fatally shot himself with his double-barreled shotgun. In fact, the guide said, Hemingway probably drank because of depression, which ran in his family; six relatives also killed themselves with a gun, including his father and a brother.

Although it’s a commitment, including a pricey five-hour roundtrip ferry ride, visiting Dry Tortugas National Park was the most memorable outing for my sons and me. Positioned almost 70 miles from Key West, Dry Tortugas National Park is the most remote of all national parks of the contiguous 48 states. It’s home to magnificent Fort Jefferson, constructed from 1846 to 1875 due to the island’s strategic location in the Gulf of Mexico near one of the world’s busiest shipping lanes. 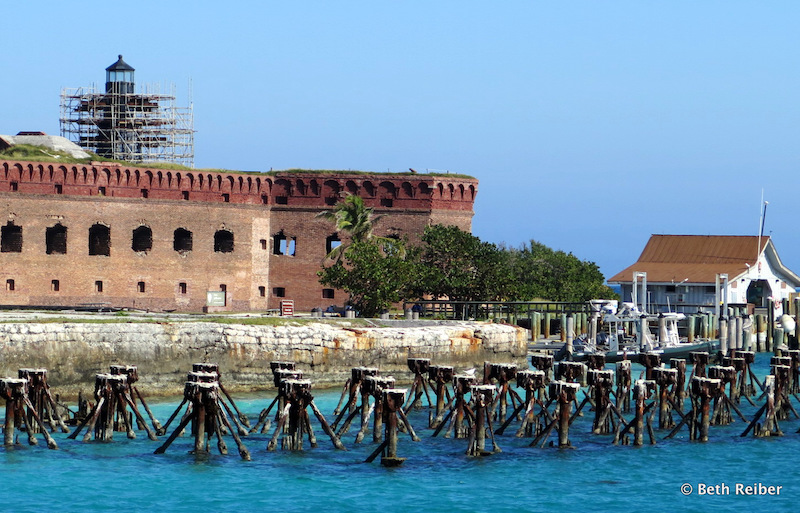 With a circular brick wall rising 45 feet tall, it’s the country’s largest masonry fort and its third-largest coastal fortification. Although the fort was abandoned in the 1880s, the Dry Tortugas have always been prized for their rich marine life and migratory birds. “Tortugas,” in fact, means turtles in Spanish and turtles still come ashore to hatch their young.

John James Audubon spent several days here in 1832, observing and painting some of the 200 avian species that pass through. Hemingway came with friends on fishing expeditions, even spending 17 days marooned in Fort Jefferson due to a tropical storm. After becoming a national park in 1992, the Dry Tortugas offers protected marine ecosystems and excellent snorkeling. The ferry service to the park provides free snorkeling gear along with breakfast and lunch

Looking back at our multigenerational trip to Key West

In retrospect, one-week in Key West was too short. 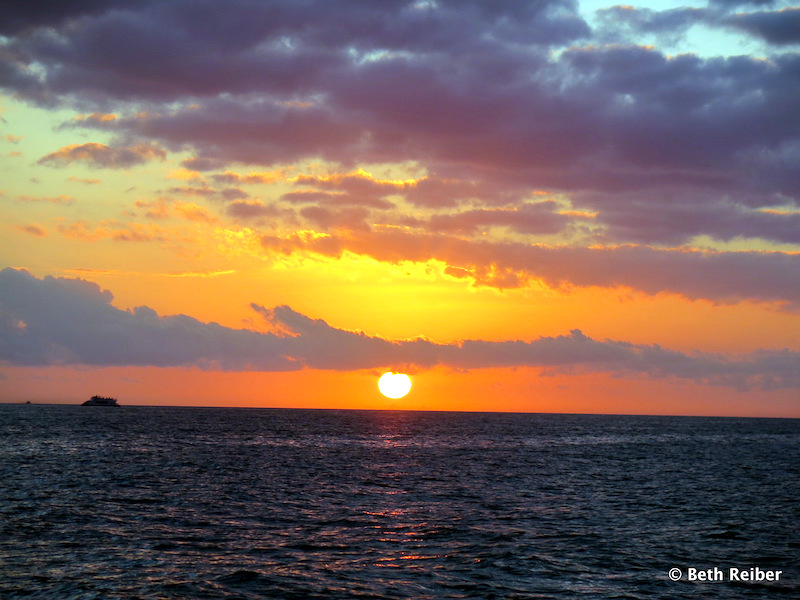 While I didn’t see everything I wanted to see, I probably saw too much. I should have taken a cue from my elders and spent more time just hanging around. I guess I’m still learning.

*All photo credits except for lead photo: Beth Reiber