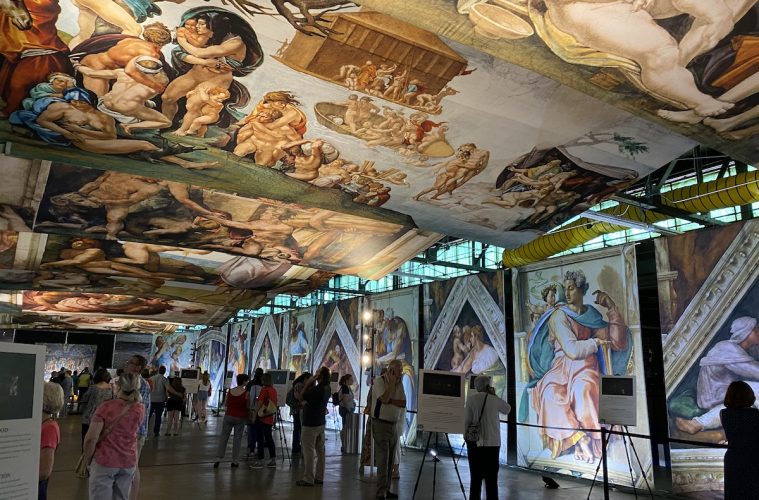 We planned our recent visit to Charlotte, North Carolina, specifically to see the Immersive van Gogh Exhibition, which turned out to be unique and enlightening. But while in the Queen City, we added an outing to experience another spectacular art installation just a few miles away: Michelangelo’s Sistine Chapel: The Exhibition.

Michelangelo’s Sistine Chapel at the Vatican

Surrounded by Rome, Italy, Vatican City is the world’s smallest independent state and the center of the Roman Catholic Church. One of the chapel’s uses, starting in 1492, is housing the College of Cardinals when it gathers to elect a new pope. Michelangelo Buonarroti created the ceiling frescoes over a period of 4 to 5 years beginning in 1508. 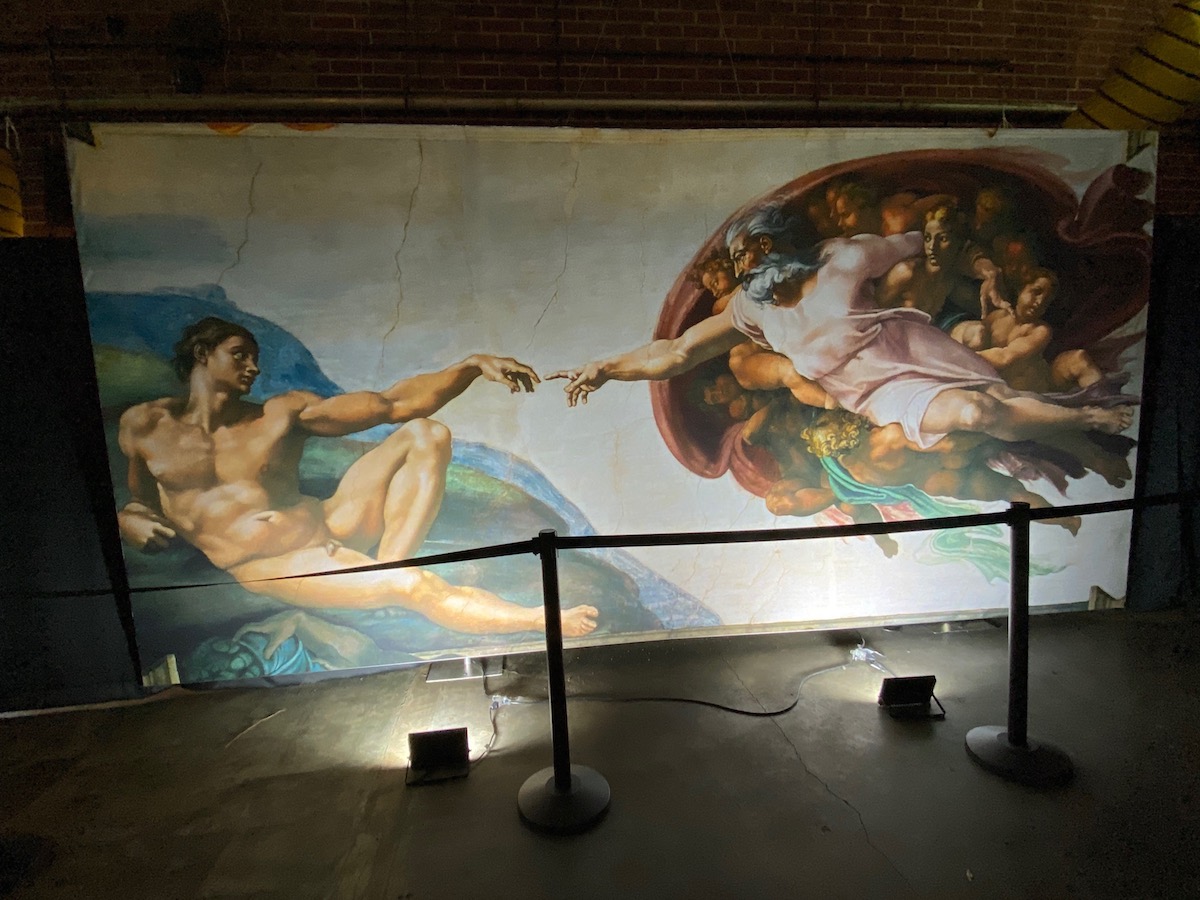 The Creation of Adam welcomes visitors to Michelangelo’s Sistine Chapel: The Exhibition

The holy atmosphere permeates throughout the shallow, barrel-vaulted room. The ceiling is around 133 feet long, 46 feet across, and 44 feet tall (approximately four floors high). To us, it seemed higher, and the art seemed to cover every square foot. Said to be the most visited room in the world, it’s estimated to draw some five million people a year. We found all that looking up equaled neck pain, but it was worth it.

Tours of the Vatican Museum last two to three hours, and the Sistine Chapel is the last stop. Generally, the amount of time to view the room is 15 minutes. Some may linger a little longer, but doing so is not encouraged. No one is allowed to talk in the chapel, and eager staff will loudly “shush” you at first utterance. Even whispers are frowned upon.

Photography isn’t allowed, and staff members will demand erasing any images taken. Also, a dress code bans shorts above the knees or visible tattoos, among other restrictions. If this seems like a lot of rules, it is, especially at the end of a three-hour tour. But the site’s reverence and the awe of the art speak to why the rules are in place. 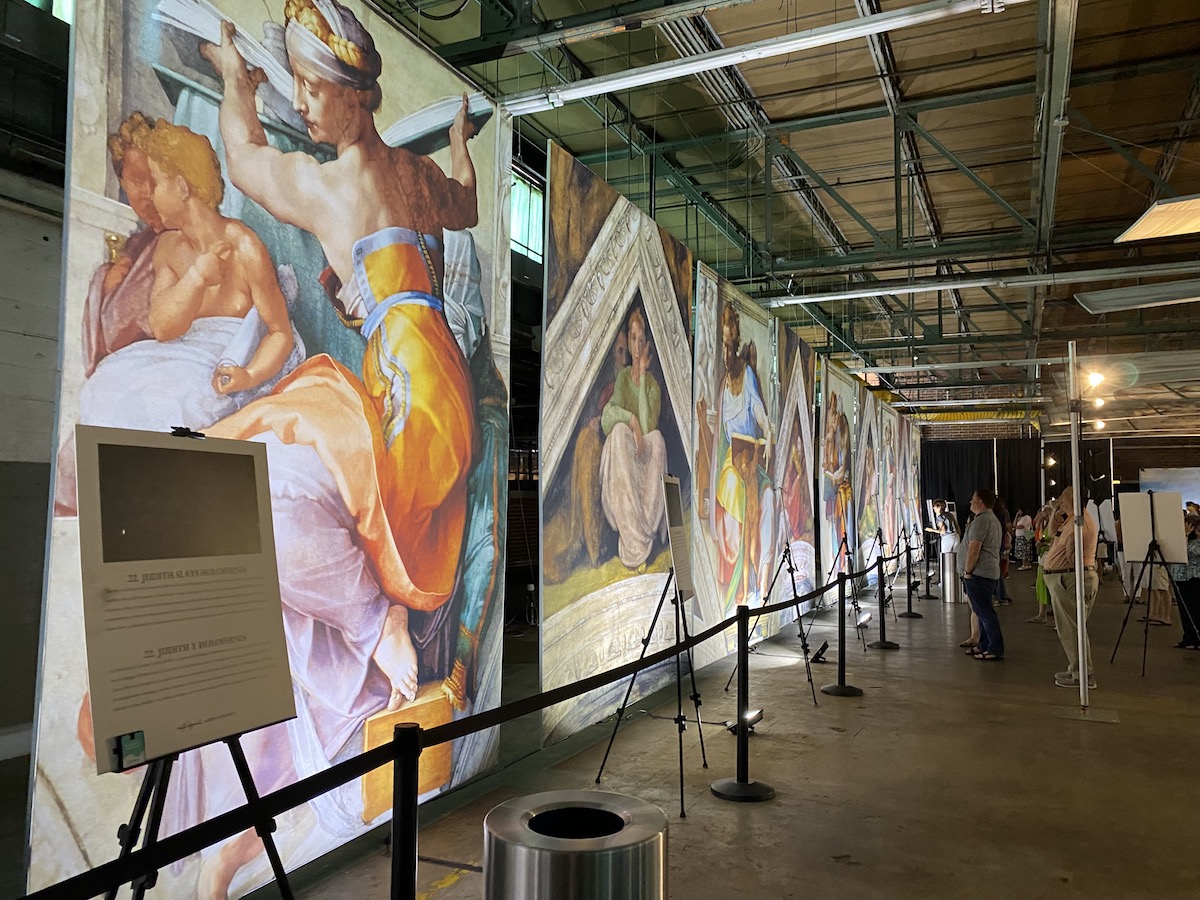 In the exhibition, Michelangelo’s masterworks are presented at eye level, allowing visitors to discern details that can’t be easily seen in Vatican City’s Sistine Chapel

We mention all these rules because the opposite is true at Michelangelo’s Sistine Chapel: The Exhibition. And that’s a big deal. Here, the distance to the actual-sized paintings is about eight feet or fewer. There is no craning, hence no neck pain.

The scenes, which portray Genesis and the world’s creation, were ordered as follows for the Charlotte show. The Creation of Adam, most famous where God extends his finger to Adam, is positioned first, at the show entrance, then come:

Some of Michelangelo’s subjects were human figures not necessarily religious enough to be on the ceiling itself but who played a part in the religious tale the ceiling tells. These include ancestors of Christ and past popes. All in all, Michelangelo painted 5,000 square feet of frescoes.

In the Charlotte exhibit, The Last Judgment fills the chapel’s altar wall. A nearby sofa and chairs invite visitors to sit and take in the reproduced masterpiece. Michelangelo began working on the actual fresco in 1541, 25 years after having finished the Sistine Chapel ceiling. He was almost 67. 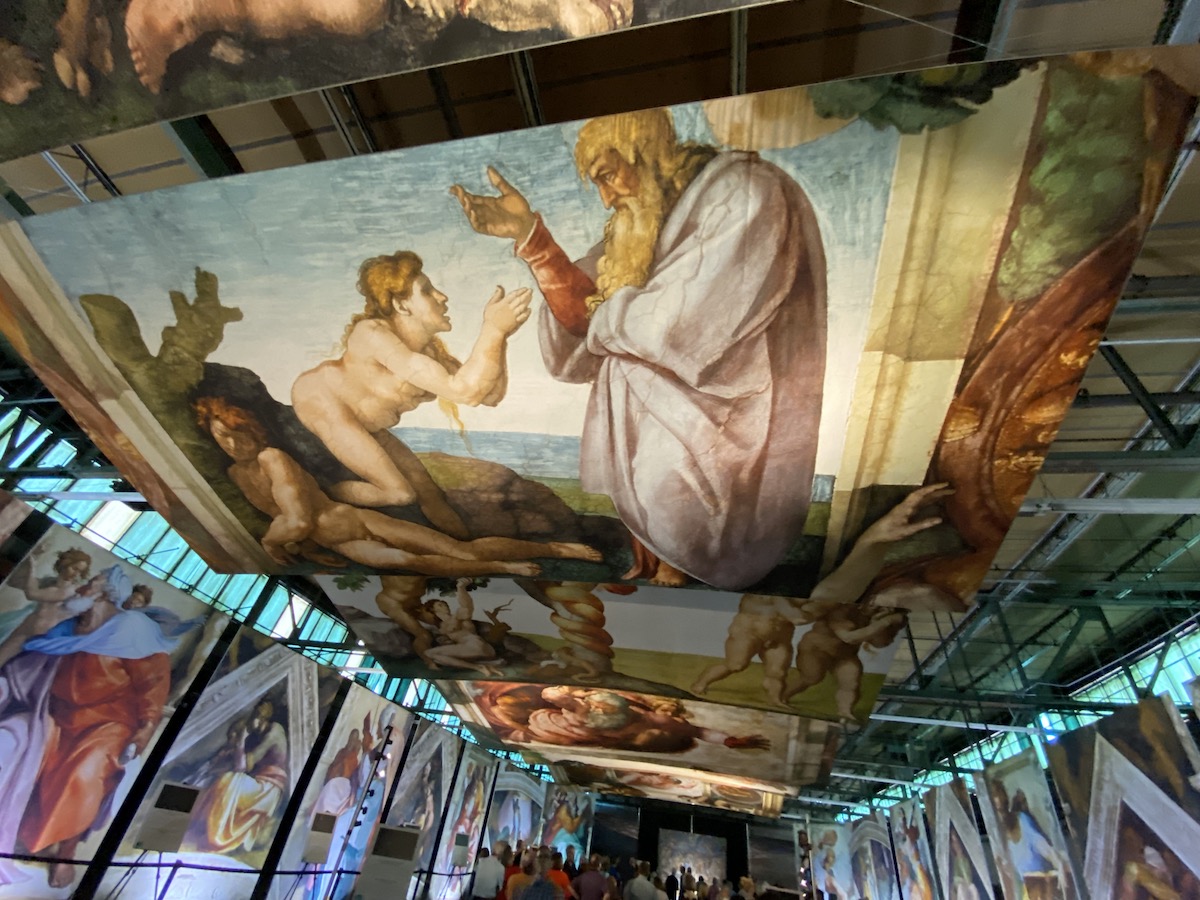 Ceiling panels in the exhibition are tilted, making them easier to see

The reproductions in Michelangelo’s Sistine Chapel: The Exhibition are the same size as in the chapel, but seeing them so much closer makes a huge difference. You can distinguish details that are nearly impossible to see at the holy site. And if you want to talk about them with your friends or others in the crowd, no one shushes you to stop.

Most of the show’s panels appear as they do in the Sistine Chapel. Those at the top of the vaulted ceiling are tilted just above your head, easy to view and study. Panels on the chapel’s sides are presented in order at eye level.

Want to take a photo or video? Go ahead. It’s encouraged. Take them and share them on social media. But don’t use a flash, tripod, or selfie stick.

And the dress code is casual, tats are allowed, and you can stay in the viewing area much longer to examine the art more carefully or discuss it. Signage does a great job explaining what you see, but renting the personal device for the recorded tour is worth the extra fee.

If you first viewed the Sistine Chapel in the Vatican, this nationally touring show will underscore your appreciation of Michelangelo’s skills. For those who haven’t visited Rome, this show’s advantage is that it makes it easy to access and immerse in a masterful piece of art history in a comfortable, welcoming, respectful environment where you may linger and chat without reproach.

The authors’ experience was hosted.

About traveling exhibitions on GettingOnTravel: 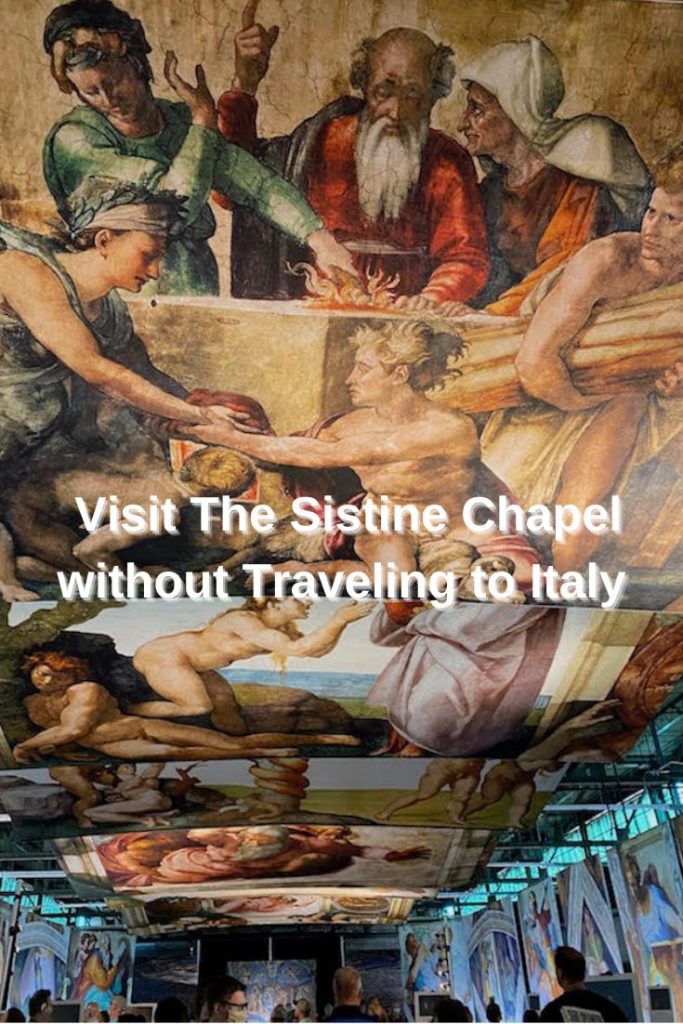