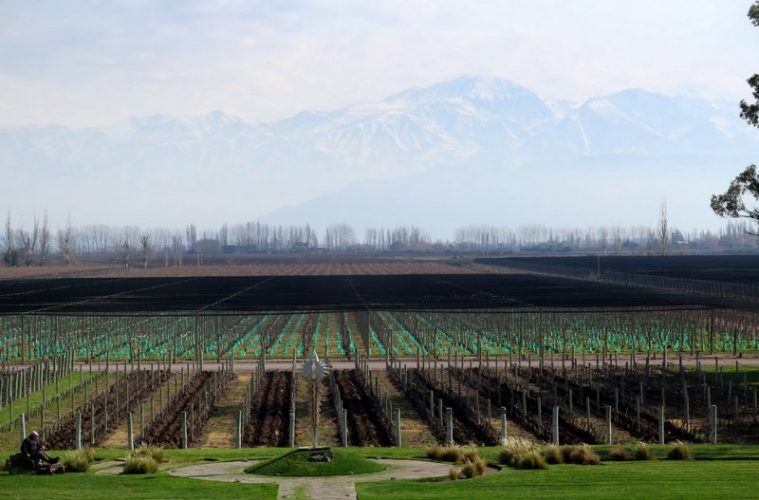 I got hooked on Carménère while visiting Chile, so it seemed only natural that a trip to Argentina should include learning about Malbec, the country’s flagship wine. That meant flying to Mendoza, Argentina’s premier wine-growing region. Located on the central western edge of the country in the Andes foothills, the Mendoza wine region produces almost two-thirds of the country’s wine, with Malbec the lead player.

Before heading off to wine country, however, my traveling companion and I decided to spend a couple of days in Mendoza city (Mendoza is the name of both the capital and the province), giving us time to acclimate to our new surroundings and to work up the courage to rent a car. As responsible adults, we stopped at the city’s tourist office to inquire about the rules for drinking and driving, but the woman behind the desk seemed genuinely surprised and more than a little amused by my question.

“There isn’t any limit to how much you can drink,” she said, her colleague nodding in agreement, and then she laughed. “Police won’t stop you. Have fun!”

Of course, that just made us wary of all those other drivers. But the great thing about driving in Mendoza is that wine country begins almost immediately south of city limits, with flat roads and relatively little traffic, making it both easily accessible and easy to navigate. Soon we found ourselves tooling through an arid, flat landscape, with the majestic Andes rising in the distance.

As we learned on our winery tours, Mendoza offers the perfect conditions for growing grapes. It occupies a flat plain about 3,000 to 4,000 feet above sea level, giving it high-intensity sunny days and cold nights, and some of the highest-altitude vineyards in the world. Its soil— comprising sand, silt, and clay, with little organic matter— is considered optimal for grape vines.

While Malbec has seen a decline in France … the grape has star status in Argentina.

Mendoza’s ideal wine-producing climate didn’t escape the notice of European immigrants, who began cultivating grapes here in the 19th century. By the turn of the 20th century, Argentinians kept the wine industry afloat by consuming up to 100 liters per person a year. By the1970s, however, competition from Coca Cola and beer caused wine consumption to sink to fewer than 24 liters per person a year, forcing many wineries to close their doors. 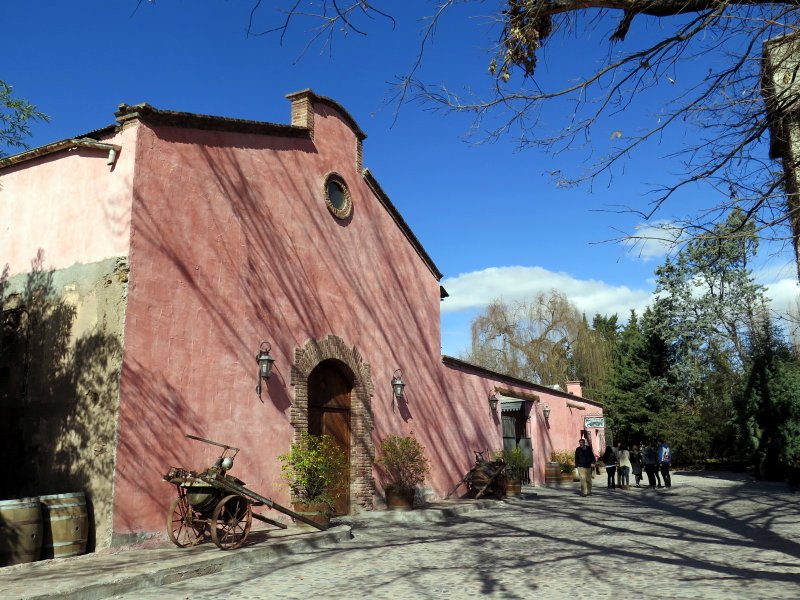 Clos de Chacras is an Argentinian boutique winery with a restaurant and old-fashioned production system.

Luckily, international interest in wine has breathed new life into Mendoza, which now has some 1,500 wineries, ranging from world-renowned companies to small family-run affairs, spread through Mendoza’s several wine-producing regions. These include Maipu, which stretches just south and east of the city and is the historic center of the wine region; Lujan de Cuyo, a 40-minute drive south of Mendoza city and home to many modern wineries and boutique hotels; and Uco Valley, a 75-minute drive south of the city and known for its high-altitude vineyards.

We decided to base ourselves in Chacras de Coria, a picturesque community in Lujan de Cuyo, with tree-lined streets, an Old World charm and an attractive small plaza, plus quick access to wineries in both Lujan de Cuyo and Maipu. We stayed in Casa de Coria, a six-room property that was once part of a winery, and offers a pool and good breakfasts.

“I fell in love with the climate and people,” says Bruce Byers, a retired American pilot and one of the owners of Casa de Coria. “The area used to be popular for vacation homes for people from Mendoza because it’s a cooler climate, but really, little has changed. Except now, we’re seeing more Americans and tourists from other countries.” 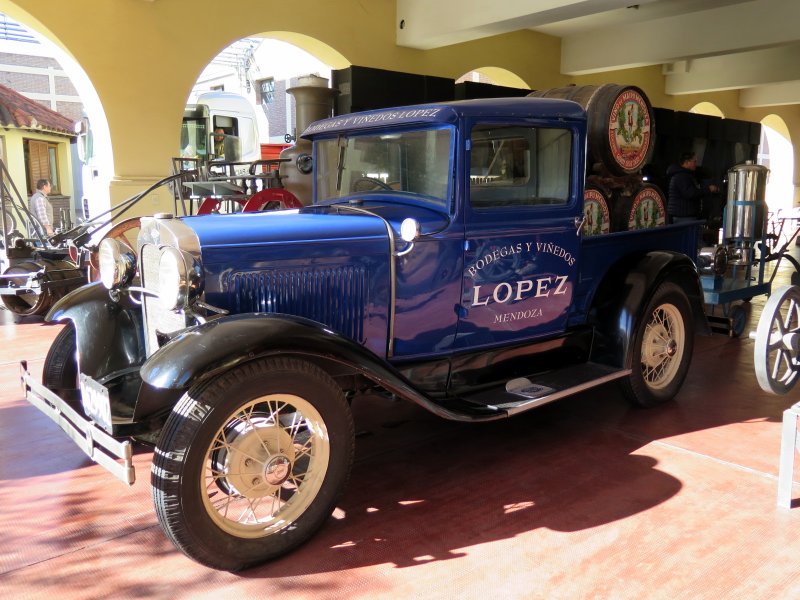 Learn more about the Mendoza wine region at the history museum at Bodegas Lopez.

Malbec grapes were brought from France to Argentina in 1868. While Malbec has seen a decline in France, where it’s used mostly for blends and is found primarily in the southwest part of the country, the grape has star status in Argentina. The country boasts more than 75 percent of the world’s Malbec vineyards.

A purple grape with robust tannins, Malbec is aged in mostly French oak barrels or stainless steel tanks and can have hints of black cherry, plum, blackberry, chocolate, mocha, molasses, vanilla and countless other notes. It also offers good value. While you can spend upwards of $150 for an exceptional Malbec, bottles costing less than $20 can have full, fruity flavors that pair well with Argentina’s famous beef.

Short of staying in Mendoza a few years, most visitors are faced with narrowing the wineries they choose to visit. We decided that four wineries were perfect for our three-night stay, choosing both world-famous and small, family-owned properties, some with restaurants on site. 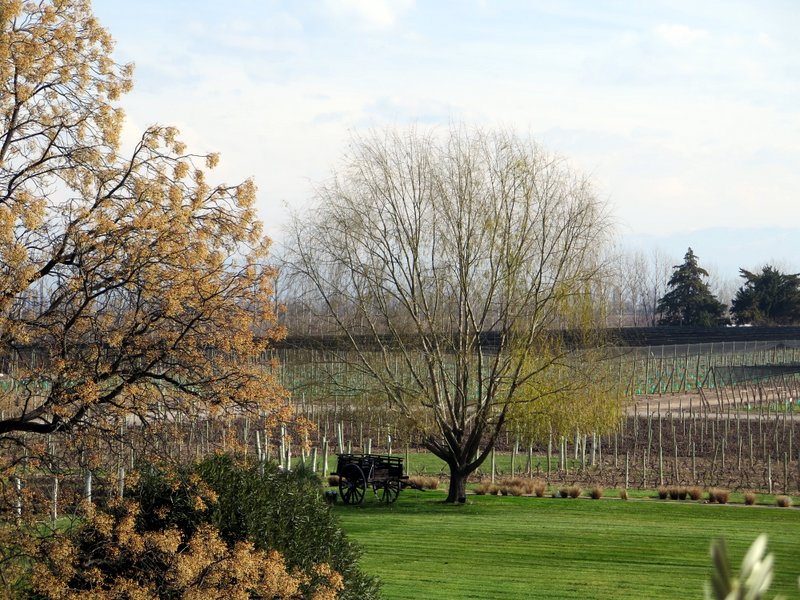 A vineyard at Bodega Norton in the Mendoza wine region.

Bodega Norton is one of the big names in Argentinian wineries, producing 22 to 26 million bottles of wine a year. Located in Lujan de Cuyo, it was founded in 1895 by an English engineer who came to help build a railway across the Andes and fell in love with Mendoza. Now with five extensive vineyards, old-style cellars, and a high-tech production line, Norton exports to 65 countries around the world.

Its Malbec tours begin in a vineyard, take visitors through the wine-making process, and conclude with a walk through Norton’s century-old cellar, where tastings are held at several stations along the way. To make the most of our visit, we had lunch at the winery’s La Vid Restaurant, which unsurprisingly specializes in seasonal ingredients meant to complement its wines. 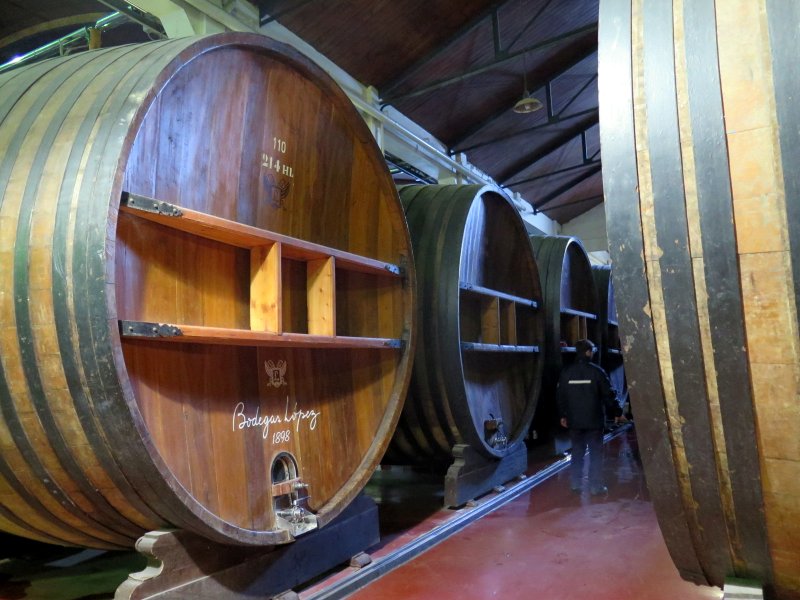 Bodegas Lopez, in Maipu, was established in 1898 and has the distinction of being owned by the same family through four generations. Its 2,471 acres of vineyards are spread throughout the region; it also devotes 240 acres for the production of its own olive oil. Free one-hour tours begin with a short video about the winery’s history and its wine-making process and include tastings with instructions on how best to appreciate wine, from the color to the swirl to swallowing and breathing through the nose. On grounds are also a museum and a gourmet restaurant. 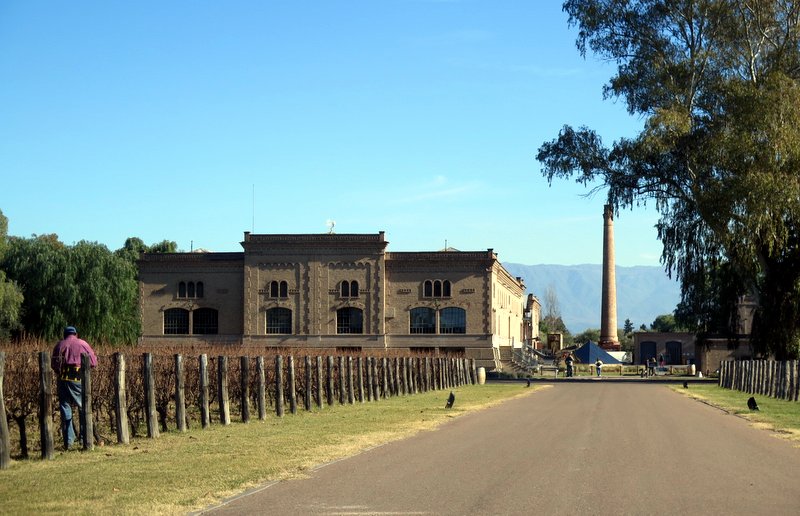 Trapiche winery has an idealic location and historic buildings.

Trapiche has a beautiful location on the edge of Maipu, making it my favorite winery tour. Its roots stretch back to its 1883 founding by an Italian. The attractive Florentine-style brick building erected in 1912 still stands beside train tracks that once transported its barrels of wine for bottling elsewhere. Plummeting interest in wine in the 1970s, however, brought the winery’s demise. It stood abandoned for 40 years before Trapiche revived it in 2006.

The winery now produces 5 million liters a year, 6 percent of which is exported, mostly to the United States, Canada, and England. Interestingly, 4,000 bottles a year are produced only for local consumption and are sold only at the winery. Tours here include more history on the region’s viticulture than the other tours we took and begin with an olive tasting; some of its olive trees are more than 100 years old. 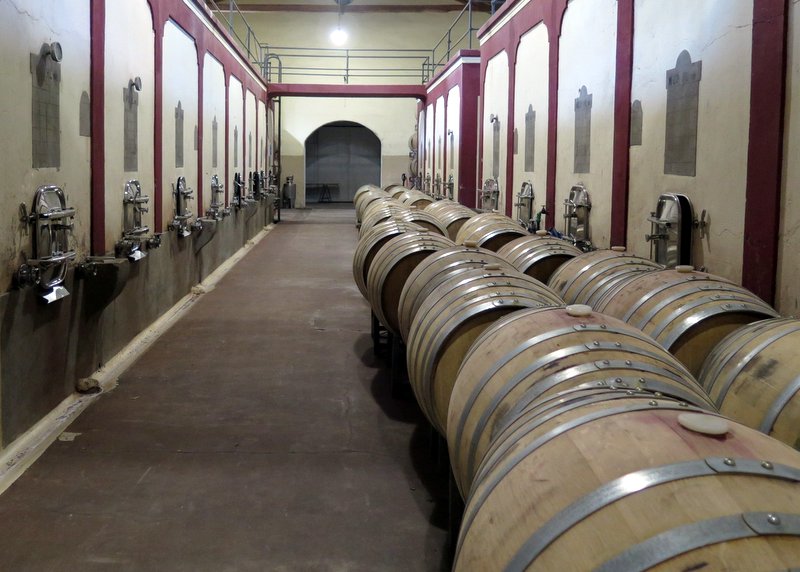 Clos de Chacras is a wonderful example of a boutique winery. Located close to where we were staying in Chacras de Coria, it’s literally a hidden gem, secluded from the main street and revealing its 2.4-acre vineyard and salmon-colored 1921 winery only after you’ve been admitted into its long driveway (reservations are a must). Its other 40 acres of vineyards are located in Uco Valley and elsewhere, together producing 100,000 bottles a year.

Established in 1883 by a Swiss Italian and once one of the largest operations in Argentina, it, too, fell on hard times and closed in the 1970s, only to be bought in 1987 by a family member, making it one of the rare wineries with the same Argentine owners. Its wine is still produced the old-fashioned way, including women picking the grapes and an old de-stemming machine. In addition to using French and American oak barrels for aging, it is also the only winery that uses cement tanks for fertilization.

I highly recommend coming here for a meal in its greenhouse-like restaurant overlooking the winery’s courtyard, where you can watch production from February to May. 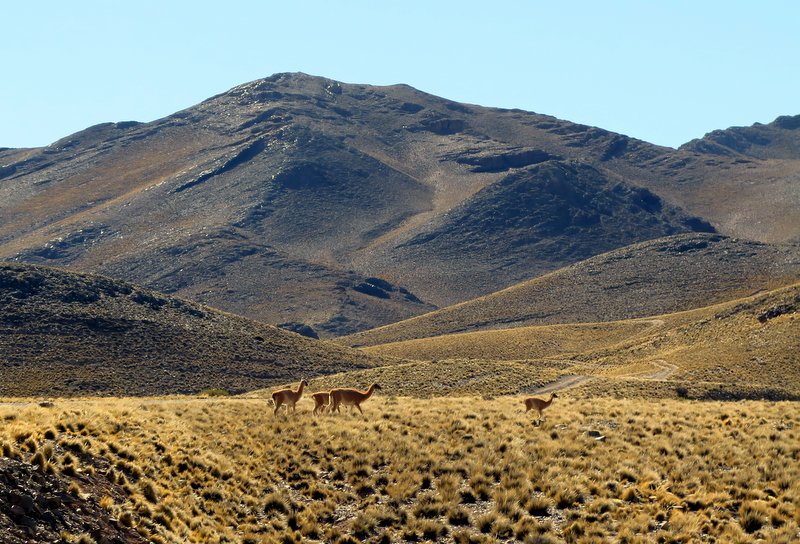 Guanacos (related to llamas) at Villavicencio, an easy side trip when visiting Argentina’s Mendoza wine region.

It’s worth taking a small vacation from wine time with a drive through Reserva Natural Villavicencio, a spectacular nature reserve sited about an hour north of Mendoza city. It’s traversed via a rough gravel road that winds about 34 miles ever higher than the flat plains leading from the city. Numerous switchbacks lead through changing landscapes of scrub brush, rock formations, rippling ridges, and multi-colored stone hills strewn with boulders, with views of the Andes in the distance. The going is slow, so be sure to bring water and food, and plan on at least half a day to make your way through, if not longer. Trust me, you’ll want to make many stops along the way to admire the views. (Note: the website is in Spanish only.)

For more ideas on what to do in Argentina, see Beth Reiber’s article on TravelReiber.

Disclosure: The author paid for her trip in full. 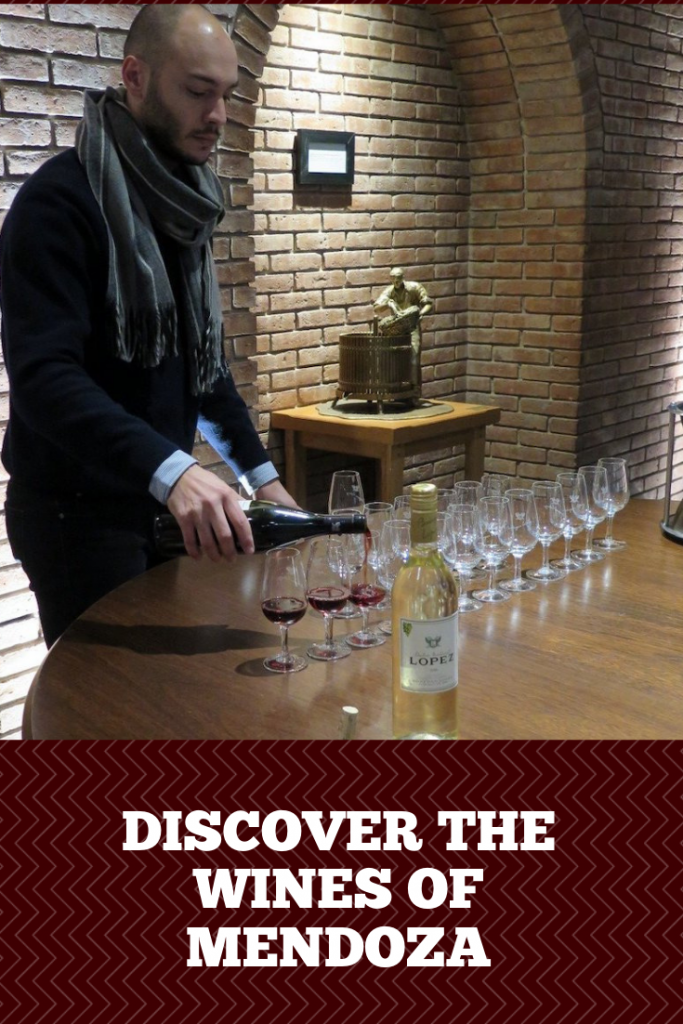