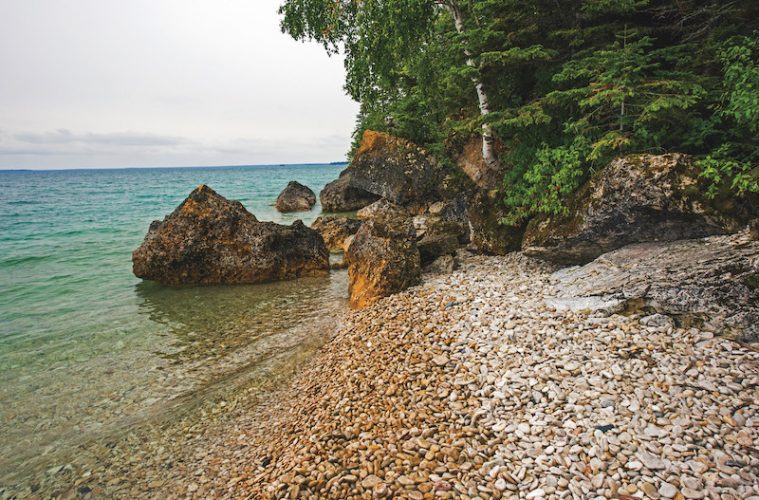 An interview with Doug O’Neill: 110 Nature Hot Spots in Manitoba and Saskatchewan

Firefly Books just released 110 Nature Hot Spots in Manitoba and Saskatchewan: The Best Parks, Conservation Areas and Wild Places, one of the latest of its series of Nature Hot Spots guides.

Authors Jenn Smith Nelson and Doug O’Neill, a Getting On Travel contributor, have combed the two central Canadian provinces to point readers to awe-inspiring landscapes where they can kayak among beluga whales, hike through boreal forests, see polar bears and more.

Fellow GOT Contributor Laura Byrne Paquet caught up with Doug, who wrote the Manitoba section of the book, to learn a little more about some of his Manitoba recommendations for boomer travelers. 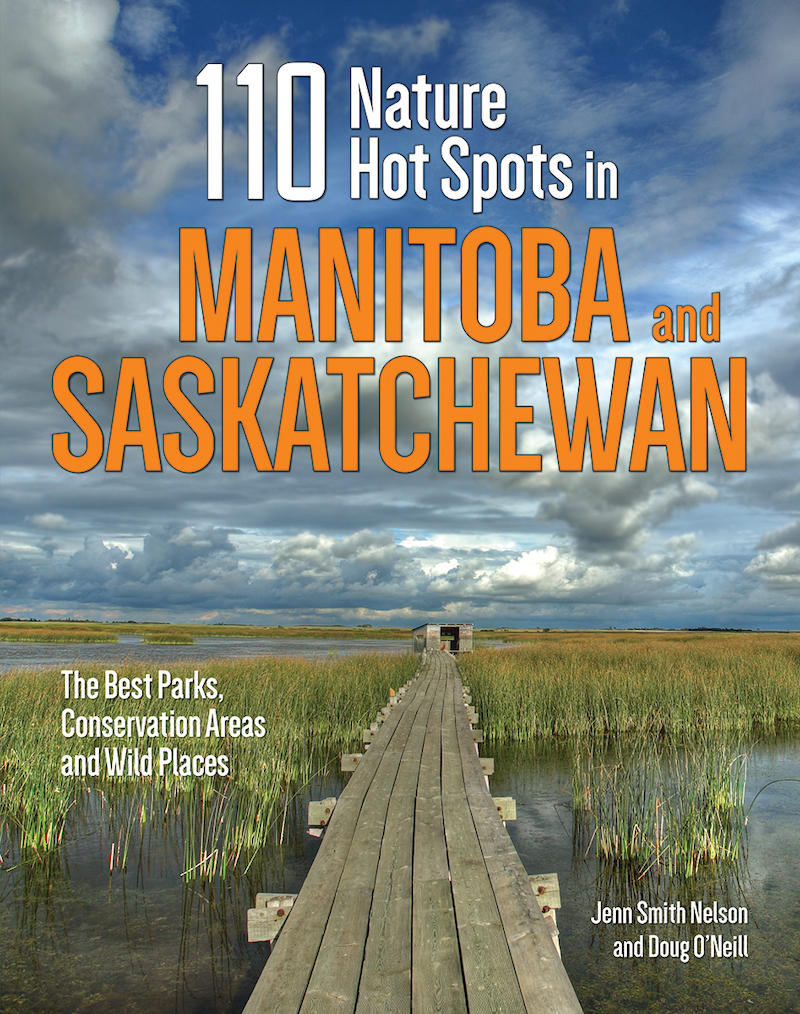 Laura Byrne Paquet: How long did it take to research and write this book?

Doug O’Neill:  Oh, it’s so hard because I’m a packrat. I have files on things I may never write about. It was probably close two years.

How did the book come about? Did you and Jenn pitch it together?

I’ve known Jenn for a number of years. On the travel media circuit, I don’t often meet and connect with other outdoorsy people but we met on a trip to the Rocky Mountains, and that’s how we connected, doing outdoorsy things.

Firefly has published a series of books celebrating nature hot spots across Canada. They were going to do a combined Saskatchewan and Manitoba book. When they put the call out, I thought, I’ve been to so many places in Manitoba and Jenn lives in Saskatchewan, and that’s how we collaborated. We’ve always got on well. And she does a lot of wildlife and a lot of bird photography, as well.

So you guys split the book pretty much down the middle, Manitoba and Saskatchewan?

Yes. I did Manitoba, she did Saskatchewan.

I know you’re a really keen hiker. What would be your top couple of recommendations for places to hike in Manitoba?

I would say Riding Mountain National Park. That was one of my favorites. It has a variety of terrain, lots of wildlife. There’s some historical stuff, and there’s a hiking trail to Grey Owl’s cabin. People have always thought that he was Saskatchewan’s first outdoorsy person, but he actually started his career in Manitoba. 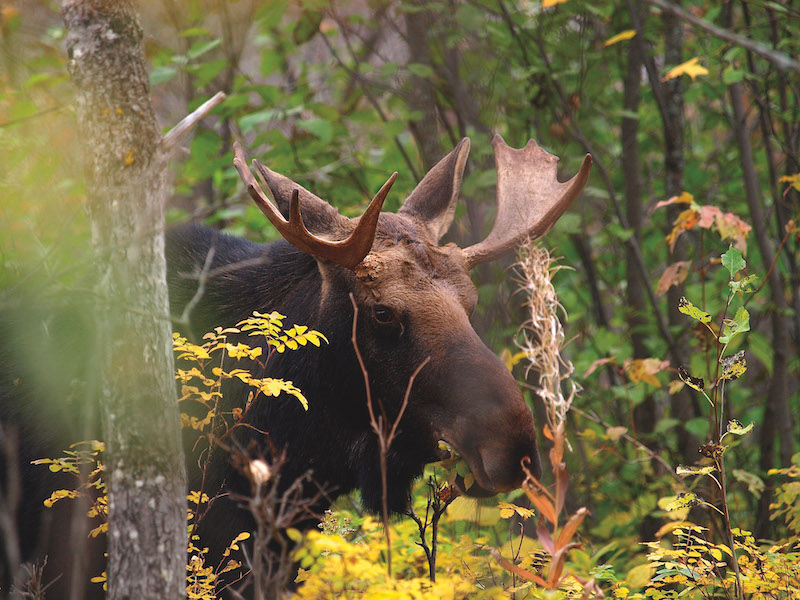 The other trail that I like is the Mantario Hiking Trail. It’s a 60-kilometer hiking trail in Whiteshell Provincial Park. Whiteshell is just an amazing place. They have indigenous sites, there’s hiking, there’s boating, there’s backcountry camping.

And the other one that I like is the Trans Canada Trail, which is now called the Great Trail. I’ve done some of that from Thompson to Stanley, as well.

What are some of the other outdoor activities you enjoy?

I do kayaking. I do paddling. I’m getting into birding—that sort of comes with hiking. There’s this huge birding trail in Manitoba, the Pine to Prairie International Birding Trail. The big starting point in Manitoba is Buffalo Point, which is just north of the U.S. border. I got hooked on that. It was with a friend of mine who was a birder, and he was really excited about these black warblers that everyone talks about. And I wanted to see some of the owls, some of the eagles. That’s how I got into birding. 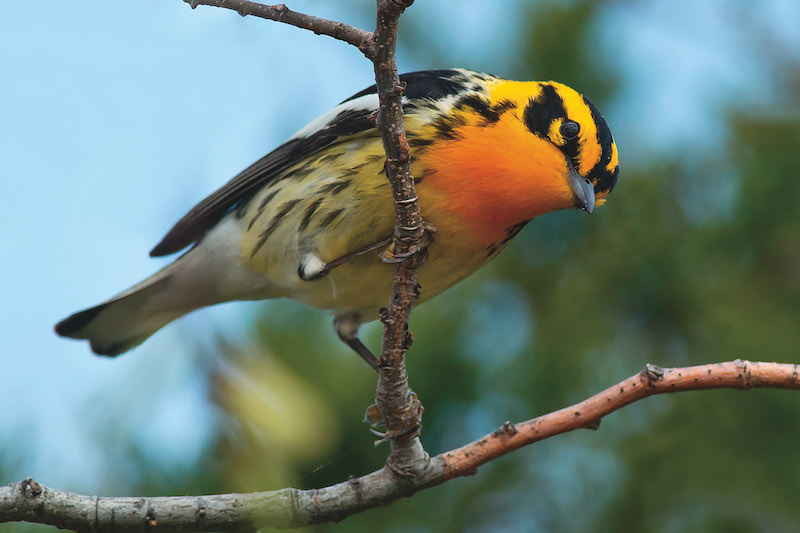 Getting On Travel has a luxury focus, not the first thing that pops to mind when people think of getting out into nature. Are there any spots in Manitoba that allow people to get into nature and have a posh experience?

The big one would be Churchill, with Churchill Wild. I’ve been twice. They offer luxury, and when I say luxury, put that into context. It’s gourmet food, but you’re in these mini cottages. They’re in a compound in the subarctic on the shores of Hudson Bay. That’s where I went tracking polar bears, and it was just amazing. 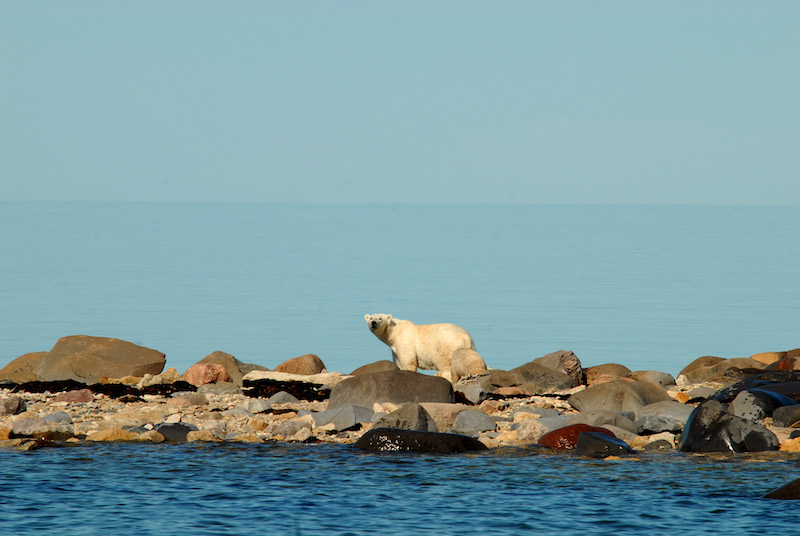 There is a research center in Churchill, which works closely with Churchill Wild. They’re private, but most of the staff have either worked at Parks Canada, or they’re botanists or wildlife experts. You go out in elevated tundra buggies to see the polar bears. Earlier in the year, you can go down and see the whales. The belugas are beautiful.

So I would say Churchill would be luxury. Also, Riding Mountain National Park. The main town within the park is Wasagaming. There are really nice inns, really nice hotels, really nice B&Bs. You get really good food. There’s a lot of comfort.

Are there any day trips you would recommend?

From Winnipeg, there’s so much you can see and do. There’s Fort Whyte; it’s maybe a 25-minute drive from downtown Winnipeg. It’s an outdoor center where you get to see Canadian geese in the V flying formation.

They have a festival in the fall. Everyone arrives at 6:30 p.m. for the geese. A thousand of them will land about a half hour before the sun goes down. So you get 500 people out there having their lunch or their picnic dinner, watching the geese land. I’ve seen it a dozen times and I can’t get enough of it. It’s moving.

And at Whiteshell Provincial Park, there’s the Alfred Hole Goose Sanctuary. That’s another easy one to get to if you want to just drive, experience this wonderful nature moment, and then get back in your car and drive home. You don’t have to do any hiking or camping.

When you were researching the book, since you already knew Manitoba quite well, did you come across things that surprised you?

Yeah. Some were good. Some scared the crap out of me. Do you know about the Narcisse Snake Dens? It’s about an hour and a half north of Winnipeg. There are these limestone caves, and limestone rock is warm, so there’s about 50,000 red garter snakes. 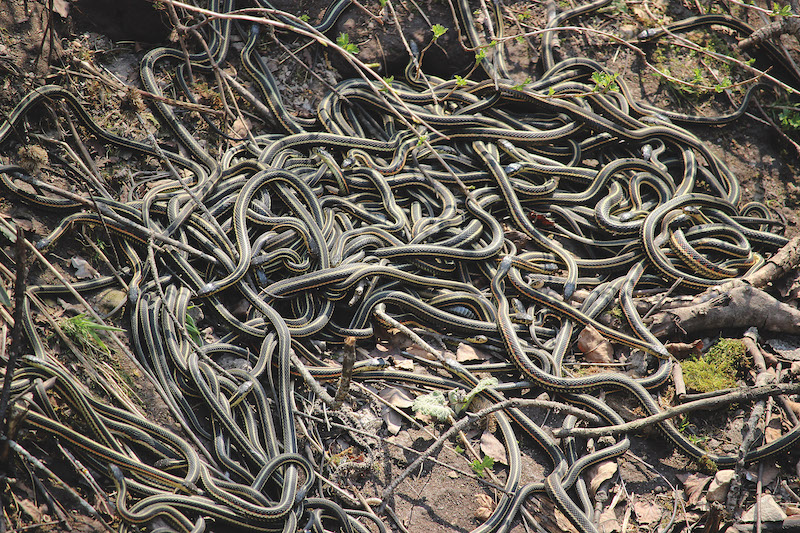 There are viewing platforms in the spring and in the fall. And in the spring, all of these garter snakes come out and they mate. And they bask in the sun and do all sorts of things for three months. And then they all go back in again. So people come to look during a three-week period in April and May. Or they come back in late summer, early September.

Little Limestone Lake. It’s called the Caribbean of Manitoba. It turns from turquoise to robin’s-egg blue over a period of about three hours as the temperature rises. And it’s really kind of freaky. As the water warms up, calcite causes the water to change color.

That’s really cool. What other kinds of surprises?

Well, Nopiming Provincial Park. Most of the trees are the result of a forest fire. Some trees actually need fire to flourish and reproduce. I interviewed this one parks official and he said, “It was a pretty dead place until the fire—then it came to life.” So that’s kind of a neat one.

Scuba diving—that was another thing I did not expect to see in Manitoba. It’s in West Hawk Lake in Whiteshell. Gazillions of years ago, a lot of meteorites fell in Manitoba. So they created huge, huge craters. So there are parts of West Hawk Lake that would be deeper than many of the Ontario lakes. It’s just not what we associate with Manitoba.

And then in Turtle Mountain Provincial Park, they have the western painted turtle. There’s only one subspecies of the painted turtle in Canada that’s found west of Quebec, and it happens to be in Manitoba. In this particular park, there are about 200 shallow lakes, and that has caused these turtles to populate exponentially. I remember the first time walking through, thinking, “this looks like it’s been Photoshopped,” because I saw 20 turtles. They’re quite beautiful. 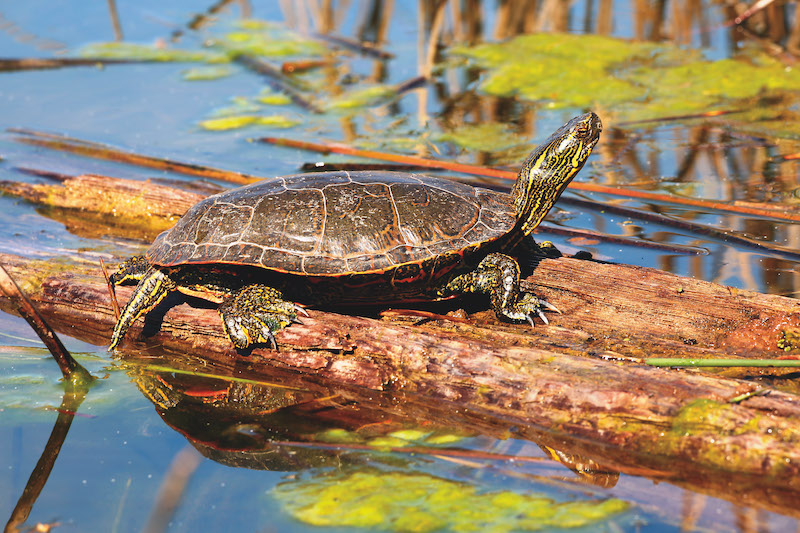 I’m trying to think of other neat things. On the Bloodvein River, there are all these aboriginal pictographs. You can’t see them unless you’re in a canoe.

So it’s only if you’re a nature lover that you get to see this art? 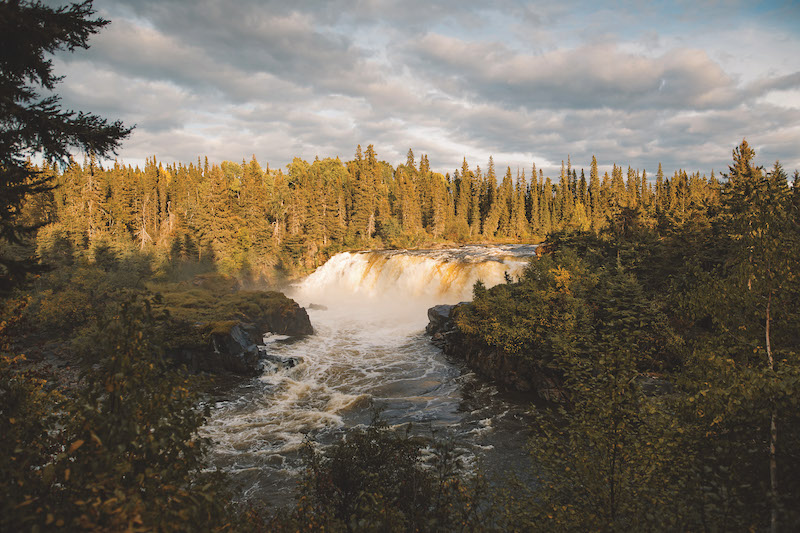 Is there anything else, either about writing a book or about Manitoba and things to see, that you wanted to add?

I think a lot of people think Manitoba is the prairie, that it’s flat. And it’s so, so different from the adjoining provinces. It’s its own entity. In Whiteshell Provincial Park, I remember the first time I saw these pink granite cliffs, and it just wasn’t what I was expecting. It challenges your notion of what this prairie province is about.

One last question that might occur to some of our readers: Is there such a thing as “too old” to enjoy nature and the outdoors?

The beauty of nature’s hot spots, wherever they are in the world, is that they’re more often than not accessible to everyone – regardless of age, fitness level, hiking ability.  As much as I like to work up a sweat hiking in a natural setting, I’m equally content to find my way to a lake frequented by rare birds, or a bluff overlooking an expanse of green forests, or simply park myself under a tree and soak it all up.

That’s the joy of exploring the nature hotspots of Manitoba – regardless of your age: Accessible boardwalks through wetlands at Oak Hammock Marsh; the gentle Chickadee Trail in Birds Hill Provincial Park that makes for a leisurely 90-minute stroll on flat terrain so you can enjoy the bird life; guided boat tours on Clear Lake at Riding Mountain National Park to watch a moose drinking along the shoreline. 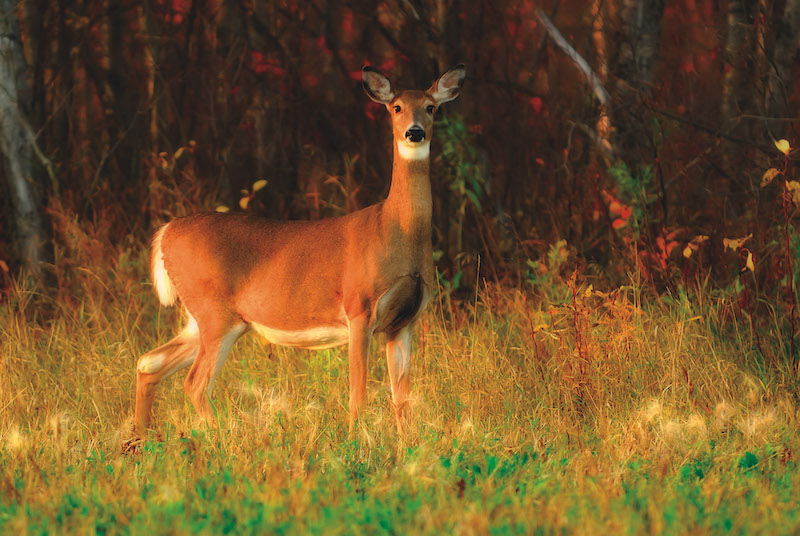 There’s so much talk these days about nature deficiency in children. I think it’s equally important for adults to benefit from the soothing power of nature.  I’m often reminded of that quote by Ralph Waldo Emerson: Adopt the pace of nature: her secret is patience.

This interview has been edited and condensed.

You can purchase Doug’s book, 110 Nature Hot Spots in Manitoba and Saskatchewan, on Amazon. 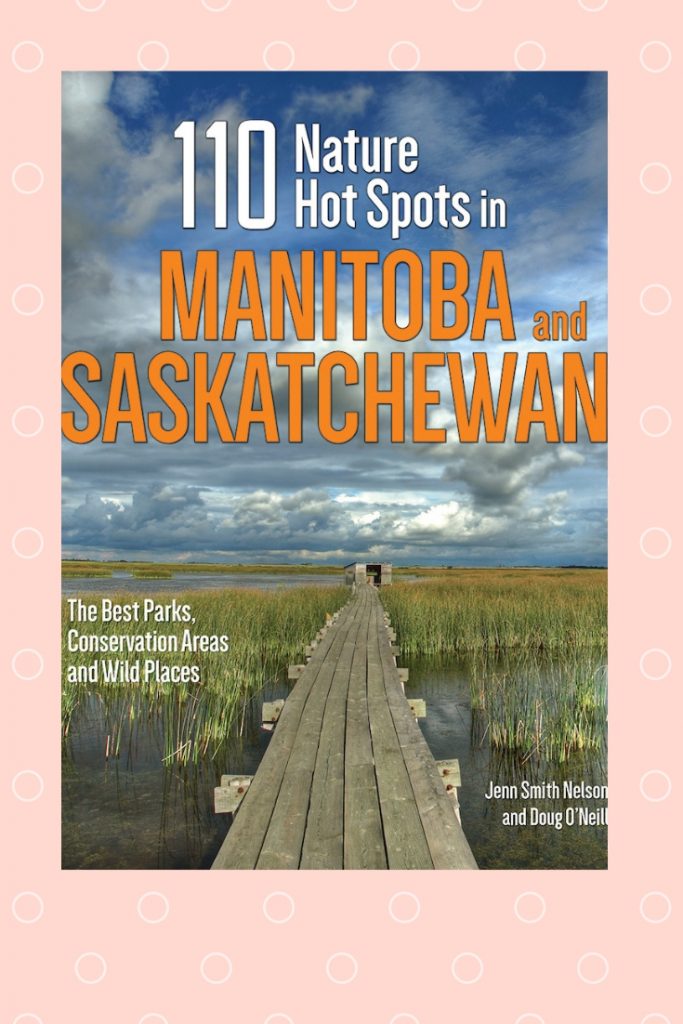