Luxury travel on a Windstar Yacht: Sails or Suites?

We pulled away from Lisbon’s Santa Apolónia dock right on schedule. Stars popped out against a velvet sky as city lights receded behind us and the Windstar yacht nosed into an Atlantic breeze. The ship’s captain was taking advantage of low tide to make our run under the 25th of April Bridge toward open sea.

The window of opportunity was small and the clearance between the Wind Surf’s mast and the towering bridge over the Tagus River even smaller. A cheer went up from passengers gathered on deck as we glided beneath the bridge just before midnight, with just one meter (!) to spare.

I couldn’t help but think our Portuguese captain was channeling his explorer ancestors, as we headed toward an unseen horizon and a day at sea before reaching Tangier, Morocco, our first port of call.

The Wind Surf, Windstar Cruise’s flagship sailing yacht, can welcome up to 310 passengers. It has gracious staterooms and suites, and beautiful public spaces. The Star Legend, an all-suite yacht accommodating up to 212 guests, provides expansive ocean views from every suite, 42 of them with balconies or private verandas.

All Windstar accommodations feature luxurious linens, a fully-stocked mini bar, and fresh flowers and fruit to welcome guests aboard. On the Star Legend, every suite comes with a walk-in closet and spacious bathrooms. The boutique line is one of the Best Luxury Cruises for Boomers.

Wind in our sails with Wind Surf

Our first ever cruise was on the inaugural sailing of Windstar’s partnership with the James Beard Foundation. We sailed from Lisbon to Tangier, Morocco, traveled along the Spanish coast, and celebrated Catalan culture in Tarragona before disembarking in Barcelona.

The very idea of traveling aboard a sailing vessel is alluring, and the Wind Surf’s roomy decks contributed to the sense of adventure and dare I say, history, of our cruise. The line’s signature “sail-away” from every port was magical, with all that canvas fluttering overhead. We had many reasons to leave our comfortably furnished stateroom to explore welcoming public spaces and enjoy leisure time on deck. 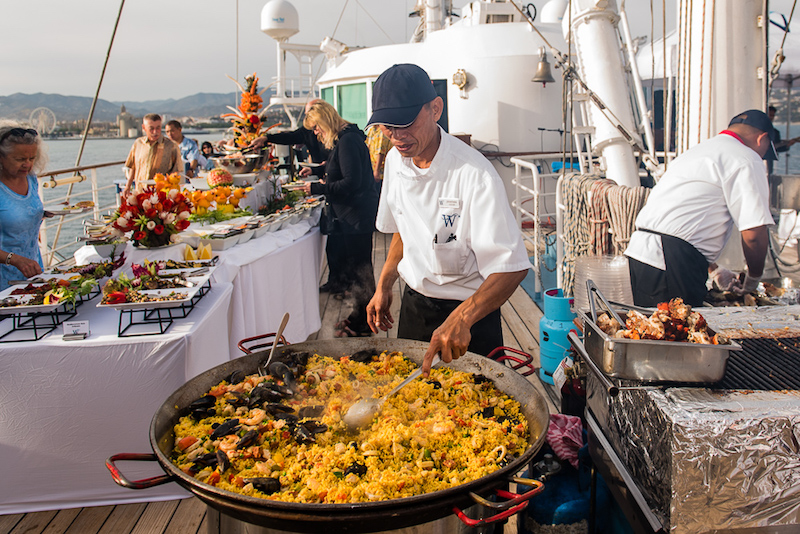 Onboard barbeque off the Spanish coast (Credit: Tom Fakler)

Casual luxury on the Star Legend

In December 2017, the Star Legend emerged from dry dock in Singapore for the President’s Cruise to the Philippines. A month later, the Icons of Southeast Asia sailing from Hong Kong to Bangkok featured the Asian-inspired culinary art of James Beard-awarded chef Andy Rickert. We boarded the yacht in Bangkok for its February return to Hong Kong via Ko Kut Island, Thailand and several ports of call in Vietnam.

We enjoyed the Star Legend’s tasteful intimacy, from the moment we stepped on board. Entering our suite, with its separate seating area before a picture window—not a porthole—just added to the feel of home-away-from-home. Only at home, we don’t have two cabin stewards to see to our every wish, and we don’t usually come home to a bottle of Veuve Clicquot chilling in a cooler! It was an inviting nest to return to after our days of shore excursions.

Suites on the Star Legend are spacious and tastefully-appointed (Credit: Tom Fakler)

In Thailand, we used a tender to reach Ko Kut Island, but elsewhere, the Star Legend and Wind Surf docked in cozy berths close by local transport.

Many of our fellow guests had sailed aboard large cruise ships, and a majority were repeat travelers on Windstar yachts. All had chosen boutique cruise itineraries such as ours. They were drawn to the ports of call, the good food and personalized excursions. From a Catalan Castell Human Tower performance in Tarragona’s Roman amphitheater to our private cookery class on Ko Kut Island, Thailand, shore excursions were highlights of our travels to exciting cultural and culinary destinations.

The Wind Surf docked in Tangier, the first port of call on our James Beard Collection cruise (Credit: Tom Fakler)

In a multi-year partnership with the James Beard Foundation, Windstar has taken a sustainable approach to culinary excellence aboard the line’s six yachts.

Executive chefs work with guest chefs on sailings of the James Beard Collection and implement their dishes. They enhance yacht menus with regional specialties and use seasonal local produce. Windstar yachts won several awards for Best Small Ship Dining in the 2018 Cruise Critic Cruisers’ Choice Awards, with two prizes going to the Star Legend and the Wind Surf. 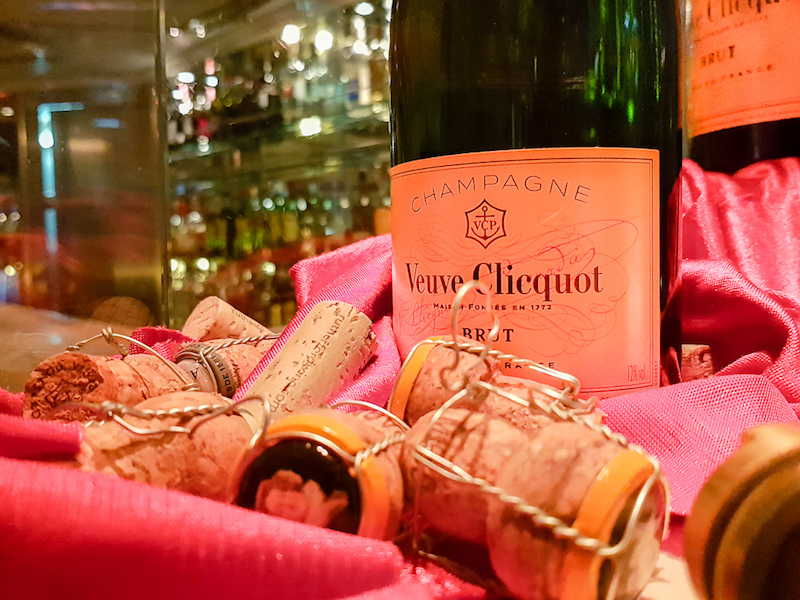 On our James Beard cruise in the Mediterranean, we participated in no fewer than five (!) wine seminars with sommelier Steve Olsen. This year, Windstar’s wine list is going global, and sommeliers are along for sailings of four of the fleet’s yachts, including the Wind Surf and Star Legend.

The first of a team hired to implement Windstar’s new wine program joined the crew of the Star Legend in December 2017. In three seminars—entertaining as well as educational and well-suited to both connoisseurs and novice wine drinkers—Justin McAuliffe explored the making of sparkling wines, whites, and reds.

Passengers choose their dining venues on a Windstar cruise, and most evenings on the Star Legend, Tom and I opted for the AmphorA restaurant. The dress is smart casual, the mood convivial, and we enjoyed sharing our table with new friends. One evening though, after a long day of sightseeing ashore, we enjoyed a magnificent meal from AmphorA in our suite, in our pajamas. So decadent! 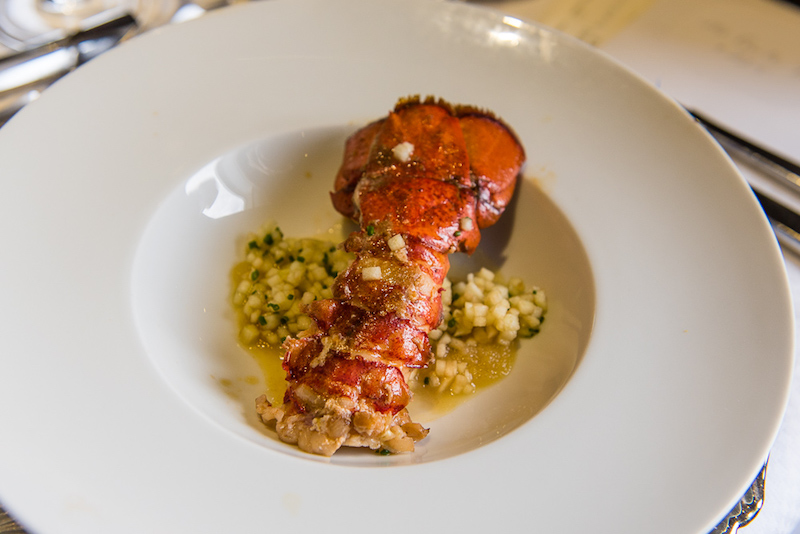 The luxury of personalized service

Guest services are the jewels in the crown of small-ship sailing.

A high staff-to-guest ratio is a key to turning services into memorable experiences. Our cabin stewards were ever-smiling, ever helpful and the entire crew seemed to know us by name.

Spa treatments were among the best I’ve had. When we joined a morning stretch class on deck, when I ordered a cup of coffee made just so, and when we were welcomed aboard the yacht’s tender after a day at the beach, the crew’s attention to detail, and to our comfort, was unwavering.

If ever Tom and I wondered whether an ocean cruise would be for us, two sailings on a Windstar yacht convinced us that small-ship cruising is its own small, wonderful universe, one we are happy to inhabit. The virtues of yacht travel—smaller ports and docks than larger ships can access, intimate dining options and personalized services—won us over on our first cruise. Guests on a Windstar yacht are promised extraordinary experiences, and the cruises we have taken so far have delivered well on that promise.

The authors traveled as guests of Windstar on the inaugural sailing of its James Beard Culinary Collection and for 2018’s Icons of Southeast Asia.

On Anita’s Feast: Tasting the food-friendly wines of Spain