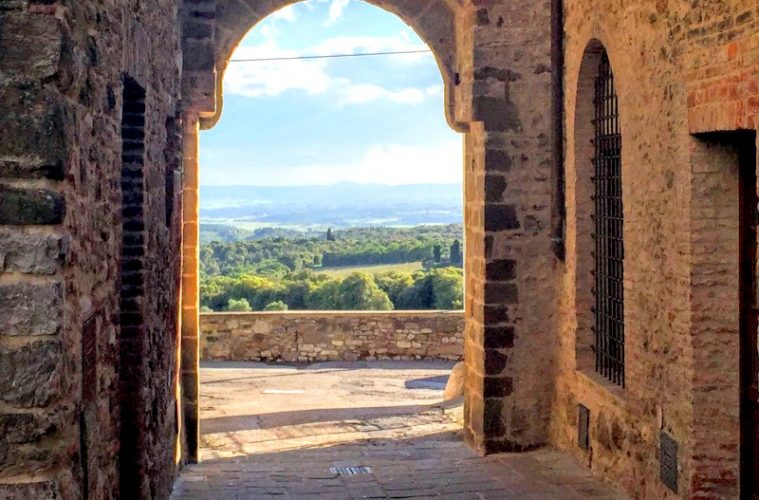 The Strange Legend of Luca Cava in San Gusme

Most visitors to Italy are eager to visit the country’s iconic monuments – the Colosseum, a national landmark in Rome; hunky David, Michelangelo’s masterpiece in Florence; and the Leaning Tower of Pisa, one of the most recognizable buildings in the world.

But in a country with so many layers of history, it shouldn’t be surprising that lesser-known monuments are scattered throughout smaller cities and towns, waiting to be found.

We think we ran into one of the more unusual monuments in San Gusme, a small hilltop town in Tuscany. 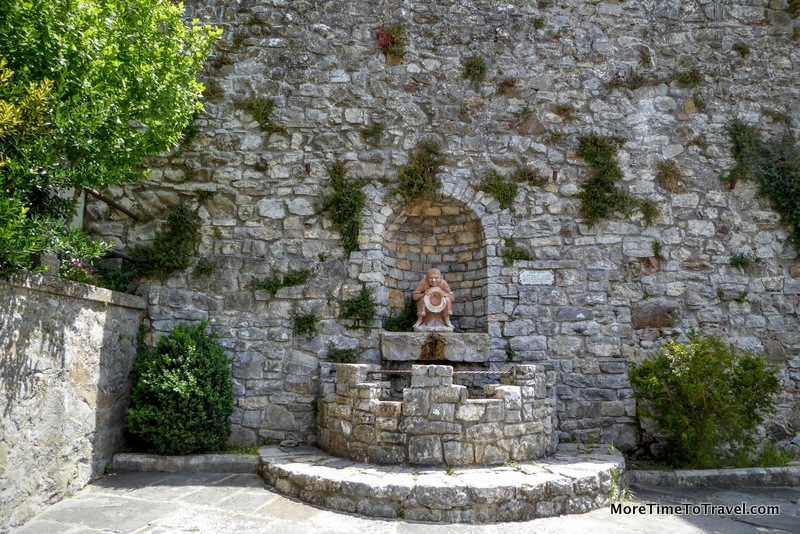 Luca Cava outside the medieval walls

Luca Cava is a terracotta sculpture of a funny little man sitting in a squatting position, as if the sculptor caught his subject in an indiscreet moment. The eye-catching statue is prominently displayed in a niche, along a stone wall near one of the two portals of the walled town. 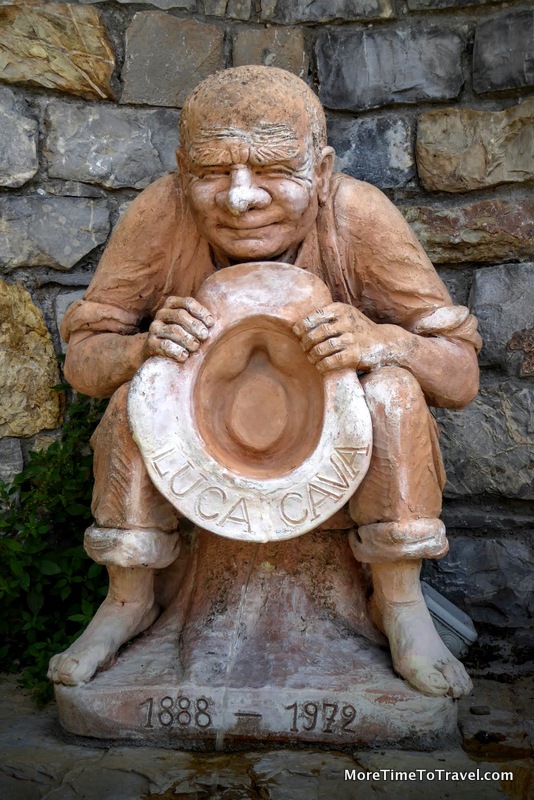 With a population estimated at less than 100 people, San Gusme is quite small and not heavily touristed. It is a frazione (subdivision) of the commune (municipality) of Castelnuovo Berardenga, which lies within the province of Sienna, capital of Toscana (Tuscany).

The story behind the statue

There are two different accounts of how Luca Cava came to be. One suggests that a statue similar to this one was first placed in a farmer’s backyard in San Gusme in 1888. It was this simple man’s subtle way of asking neighbors to fertilize his land rather than leaving their “poo” on the streets inside the town’s walls.

The other version suggests that an innkeeper in the town was tired of cleaning up the excrement outside his inn. So he erected a public toilet and put the statue outside so even the illiterate townspeople would understand the purpose of the structure.

Whatever the genesis – on some date uncertain, someone destroyed the controversial statue, presumably because it had become an embarrassment to the town.

In the 70s, an Italian journalist named Silvio Gigli heard about the legend and convinced the town to replace the original with the new Luca Cava that sits outside the walls today. He thought it would be a way to help promote tourism to this and other towns in the Chianti region.

A famous Italian cartoonist, Emilio Giannelli designed the new Luca Cava but it was Gigli who composed the wording on the plaque beside him (translated into English below):

“King, emperor, pope, philosopher, farmer and worker: a man doing his daily functions. Do not laugh, think only of yourself.“ 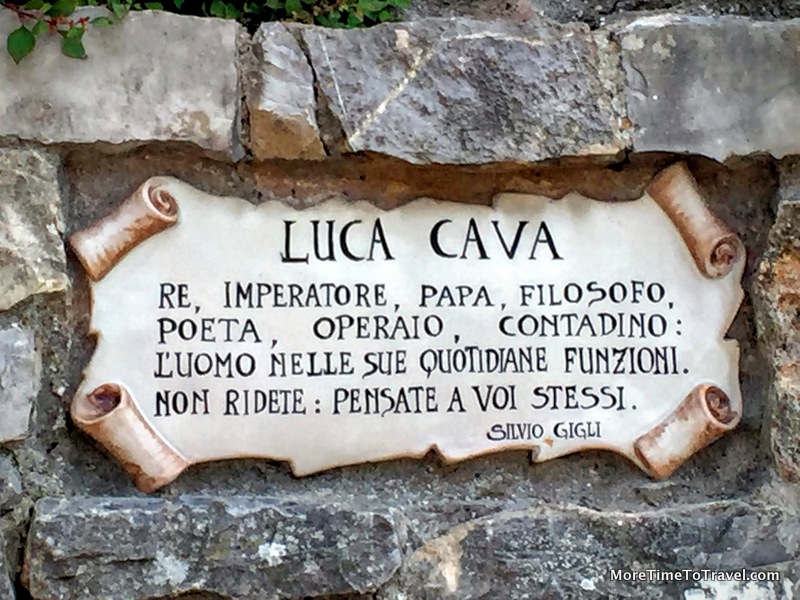 Stone plaque beside the statue of Luca Cava in San Gisme

Now during the first two weeks of September each year, the town holds a Luca Cava Festival. First organized by Gigli, the event attracts visitors to the town with music, food, wine and crafts.

During the festival, an enactment of a medieval race called the Palio delle Botti, is held. This qualifying race leads up to a national competition among other “Wine Cities” in Italy. As part of the race, teams of no more than two people push heavy, 500-liter wine barrels through the stone streets of the town.

The timing of the festival coincides with the annual announcement of the recipient of a journalism award named after Silvio Gigli. Although the festival petered out after Gigli died in 1988, the Pro Loco (a grass roots civic organization that promotes tourism) revived it in the late 90s.

It’s easy to fall in love with a town that’s so open-minded and comfortable with its origins that its most famous monument is a sculpture of a man, prominently placed outside it’s medieval walls, squatting and “taking care of business.” 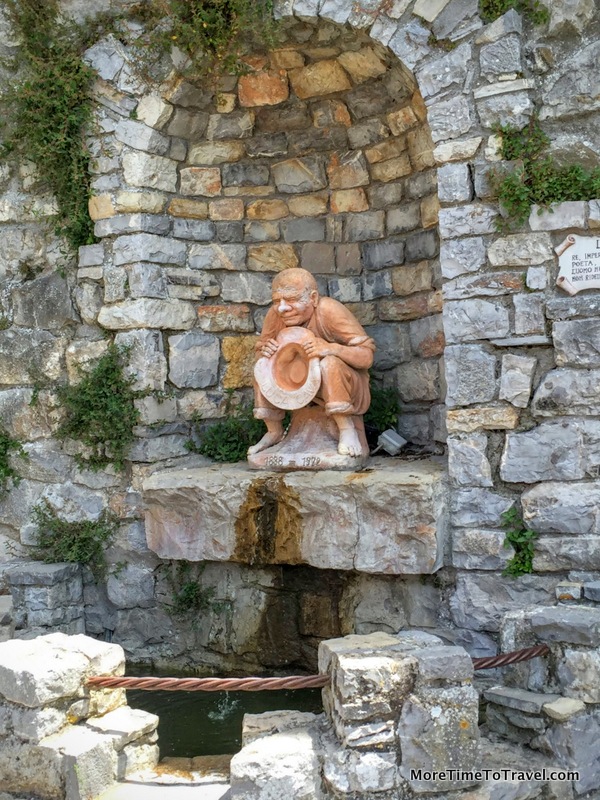 View of Luca Cava from the side

Some interesting reads about the traditions of Luca Cava and the festival:

Be sure to get the whole scoop on San Gusme on More Time To Travel! 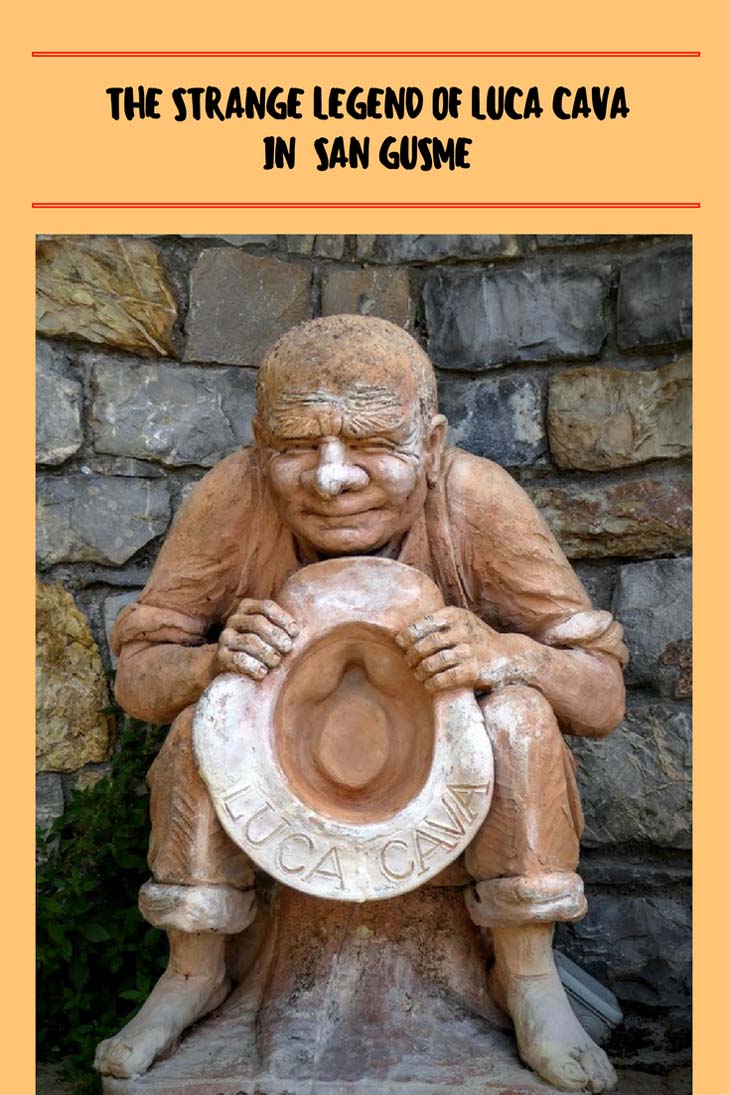