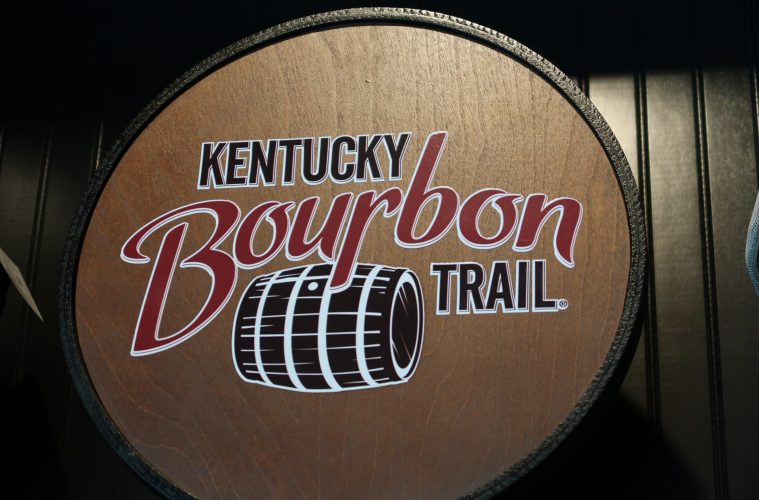 If you want to learn  about bourbon, go to Kentucky. After all, 95 percent of the world’s bourbon is made in the Blue Grass State. But with some 70 distilleries spread around the state, where to start? Luckily, my bourbon-loving son introduced me to the Kentucky Bourbon Trail. Linking 16 distilleries strung mostly between Louisville and Lexington, it includes big names such as Wild Turkey and Evan Williams, as well as smaller operations like Town Branch.

One of the best reasons for visiting a distillery is that it gives you the chance to sample or buy some of the most coveted products. Many of these may not be readily available back home, especially small batches in limited quantities and single barrel bourbon (as opposed to blends).

Most distilleries on the Kentucky Bourbon Trail offer tours for a fee. These last about an hour, taking in the distillation process and ending with tastings. If you’re waiting for a tour or simply want to try the company’s bourbon, most also have counters selling a select range of their  products or even sophisticated bars with craft cocktails. 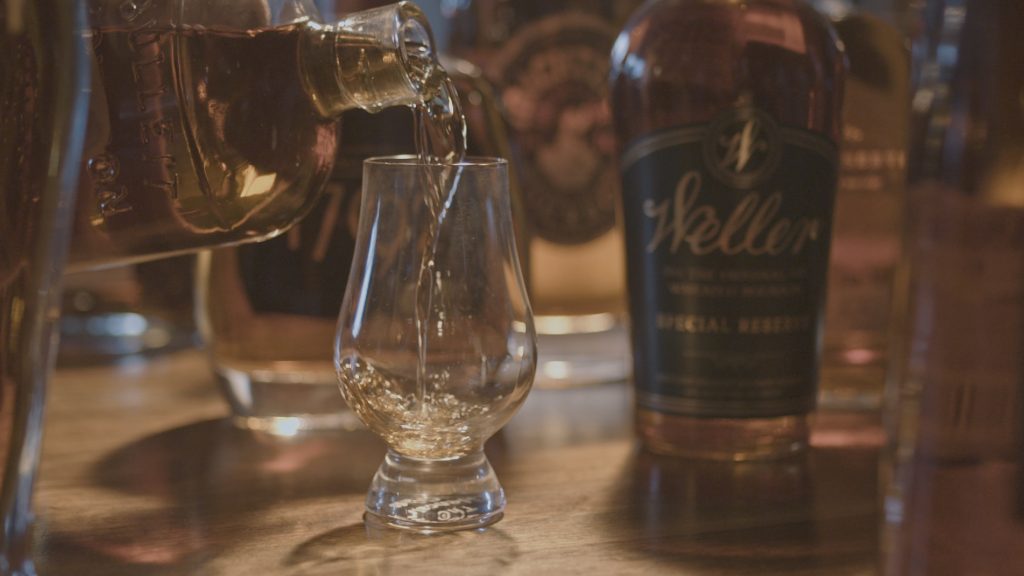 Water or ice take the bite off bourbon. (Credit: Neat)

With interest in bourbon soaring worldwide, you might also be interested in knowing that there is no best way to drink bourbon. AJ Hochhalter, who produced the documentary Neat: The Story of Bourbon, said he prefers to drink it neat (straight up, without water, ice or mixer). That way, he can taste the complexity and appreciate the unique journey bourbon undergoes from distillation and aging to his glass.

But as his documentary and distillery tours make clear, how you enjoy it is entirely up to personal preference. It’s perfectly fine to add ice or water to take off the edge and open up the flavor. There are also a huge variety of bourbon-based cocktails. The classic mint julep, mainstay of the Kentucky Derby, is made with bourbon, water, sugar, ice and mint. The old fashioned, created in Louisville in the 1880s, is usually made by adding ice, water, bitters, simple syrup, and an orange slice. 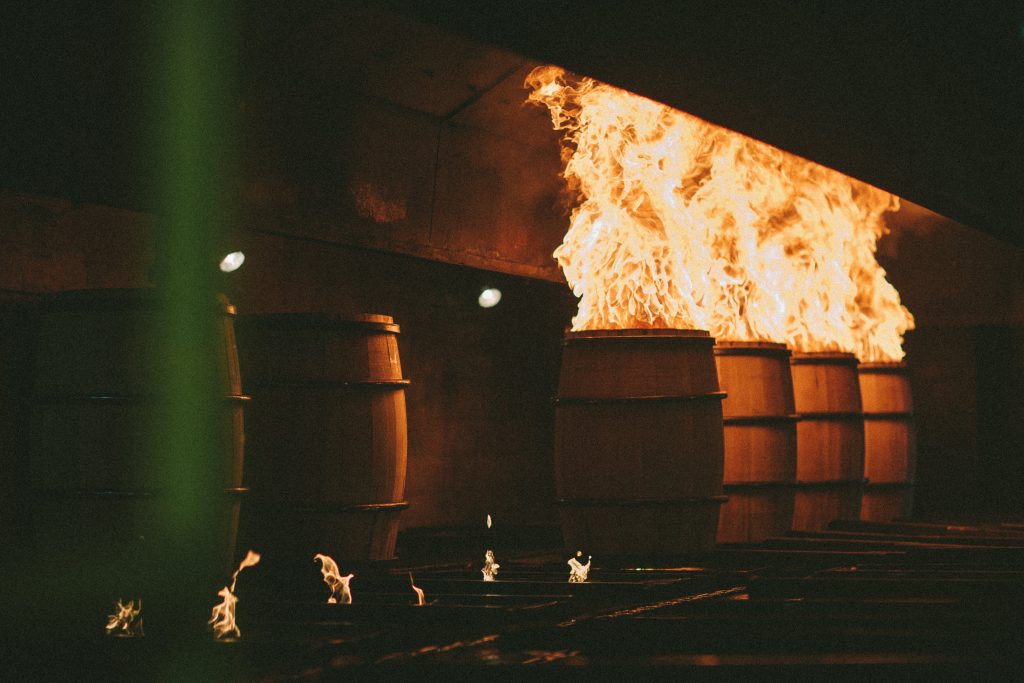 What makes bourbon a bourbon?

One of the things that surprised me when learning about bourbon is how strictly it’s regulated. Although bourbon is classified as a whiskey, it’s in a class all its own. For one thing, by law, the United States is the only place that can produce it. That gives it the distinction of being America’s only certified native spirit.

Furthermore, it must be made from at least 51 percent corn, with the rest, comprising grains like rye and winter wheat, left to the discretion of the distiller. In addition, bourbon must be distilled to no more than 160 proof, barreled at 125 proof and bottled at no more than 80 proof.

But to me, the most incredible part of bourbon’s journey is that it must be aged in new oak barrels that have been charred in fire. That charring allows the liquid to penetrate the wood and absorb its complex caramel vanilla flavor as it ages in storehouses (called rickhouses) and reacts to the heat and cold of the seasons. Absolutely no flavoring, coloring or additives may be added, making it, to my mind, almost a health drink. 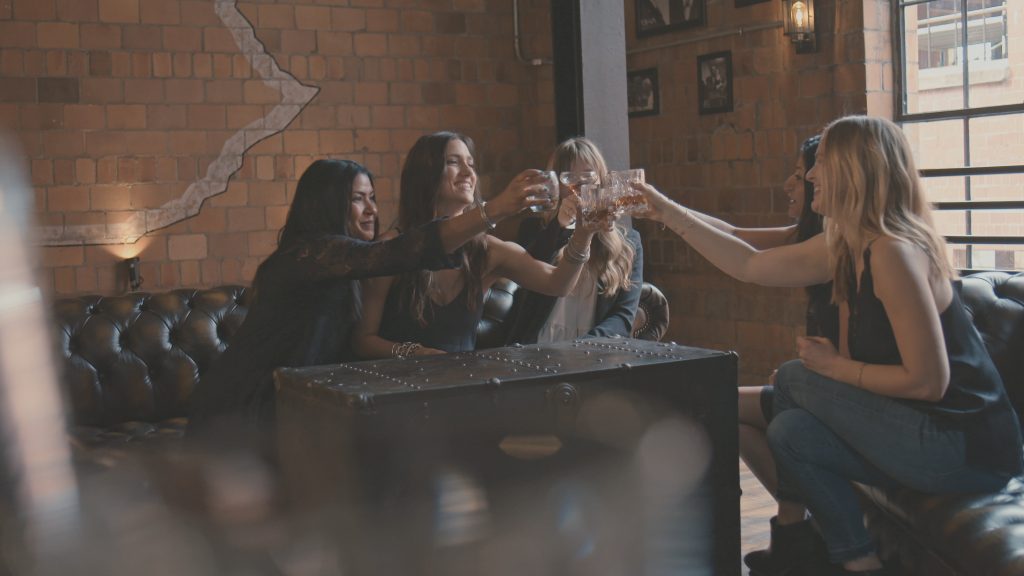 With six distilleries listed on the Bourbon Trail, Louisville is the best place to begin your education. Your first stop should be the Kentucky Bourbon Trail Welcome Center, located in the Frazier Kentucky History Museum. In addition to staff that can help plan your Bourbon Trail itinerary, it offers an in-depth exhibit explaining why Kentucky’s soil and limestone-filtered water is integral to bourbon, how the amber liquid is made, and bourbon’s history from the 1800s through Prohibition to today.

Pick up a souvenir Passport here or at any of the participating distilleries. If you complete visits to all 16 Kentucky Bourbon Trail distilleries, you earn a souvenir tasting glass.

Near the Welcome Center are four distilleries located within a one-mile stretch of Main Street, once known as Whiskey Row. Dating back to the 1870s and housed in an historic four-story building, Old Forester Distilling Co. has the distinction of being the only company making bourbon that has been continually distilled and marketed by the founding family before, during (for medicinal purposes, of course!) and after Prohibition. It was also the first company to sell bourbon in sealed glass bottles. And, it’s the only major distillery with an onsite cooperage, included in the tour, where you can see barrels being made and charred.

Also on Main Street, Angel’s Envy takes an innovative approach to its handcrafted, small-batch whiskey. Its Kentucky Straight Bourbon is made the traditional way and aged up to six years in oak barrels, but it’s finished an additional three to six months in ruby port casks imported from Portugal, adding notes of vanilla, maple syrup and a hint of Madeira. Its latest Kentucky Straight Bourbon creation is finished in Oloroso sherry casks, named by the Robb Report as one of the top spirits of 2019 and the top bourbon. 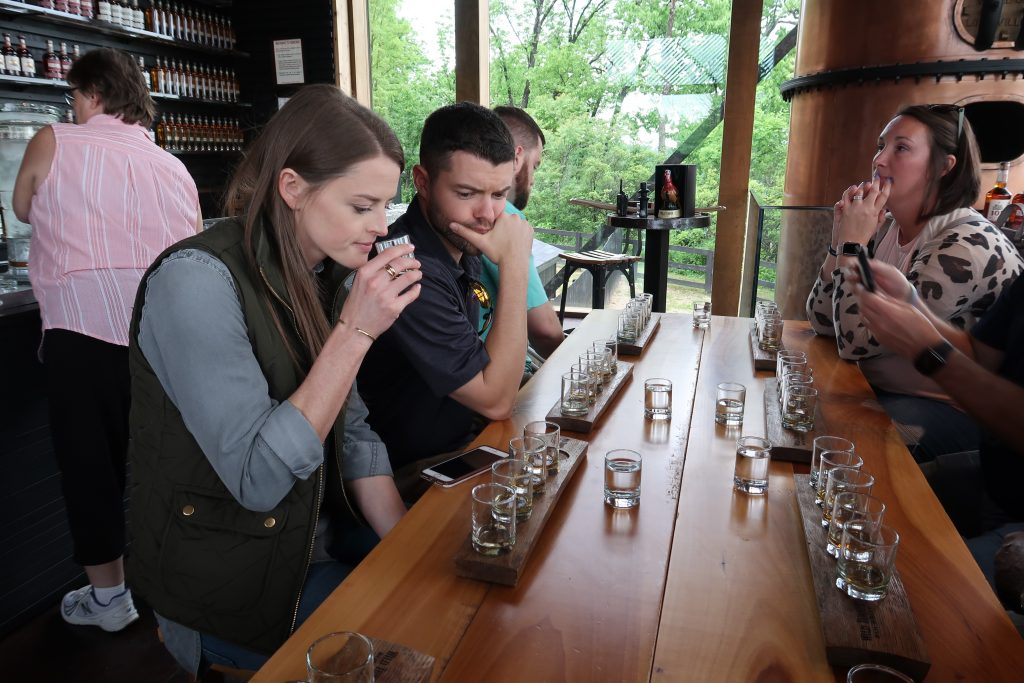 It takes fewer than 90 minutes to drive from Louisville to Lexington, but you’ll want to take detours to small historic towns. Bardstown, settled in 1780 and trademarked as the Bourbon Capital of the World, has almost 200 downtown buildings on the National Register of Historic Places. Of its five distilleries, three are part of the Kentucky Bourbon Trail, including Heaven Hill. Founded in 1935, it’s the only heritage distiller that makes every category of American whiskey (think whiskeys made from 80 percent corn, plus rye, wheat and malt whiskeys) in addition to bourbon.

In a secluded location near Loretto, Maker’s Mark is known for its bottles topped with signature hand-dipped red wax. The distiller uses winter wheat for a more mellow, sweet taste as opposed to rye with its bolder finish. It also uses a yeast strain that’s more than 150 years old, fermented in tanks made from century-old cypress planks.

On and off the Kentucky Bourbon Trail

In 1869, two brothers opened a family distillery on Wild Turkey Hill, near Lawrenceburg. In 1893, their bourbon represented Kentucky at the Chicago World’s Fair. Today, Wild Turkey offers tours that take in the distillery and a seven-story rickhouse built in 1894, ending in an airy tasting room with panoramic views across the Kentucky River.

As an example of what tastings can be like, our samples included Wild Turkey 101 (its best-seller), its Russel’s Reserve single-barrel, its barrel-proof Rare Breed (which means it is not proofed down and not cut with water), and its American Honey liqueur, another top seller. In fact, Wild Turkey introduced the world’s first bourbon liqueur in 1976, made with honey, making it a pioneer in flavored whiskeys. I ended up purchasing a bottle of American Honey Sting, with ghost pepper to give it a real kick. 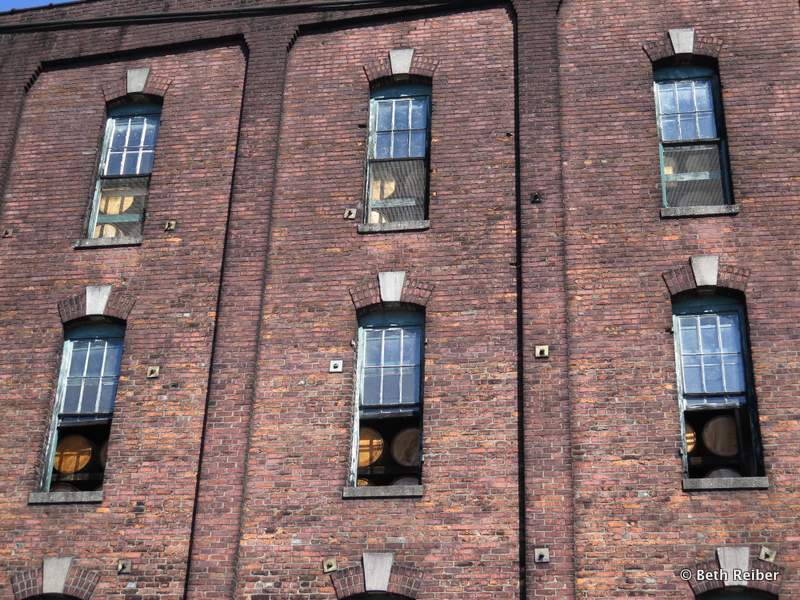 Although there are more than enough distilleries listed on the Kentucky Bourbon Trail to keep you occupied, there are plenty of others worth visiting in the same region. Buffalo Trace, near Frankfort, has had different names since the 1780s, but because it has never closed, it is the oldest continuously operating distillery in the country. Its historic buildings, idyllic countryside location, and informative tours make it one of my favorites, plus the fact that all tours with tastings, including special-interest tours like its National Historic Landmark Tour and evening Ghost Tour, are free.

After visiting distilleries in Kentucky and learning about bourbon in all its complexities, I found myself especially appreciative of the loss suffered by the sinking of the Arabia Steamboat in 1856. The ship took everything down with it except its human occupants, who disembarked safely. One of many steamboats to succumb to the perils of the Missouri River during the 19th century, it was finally recovered in 1988 from its cold burial in deep mud.

The ship’s cargo, destined for general stores out west, is now housed in The Arabia Steamboat Museum in Kansas City. That cargo included shoes, nails, food, clothing, tools, fine china, guns, and everything else a household might need. Never recovered, however, were 400 barrels of Kentucky’s finest bourbon. Neither steamboat nor museum owners ever found a trace of bourbon, leading to speculation that the barrels might have been stolen the night of the accident or floated downstream.

I can feel their pain, but I wager those barrels made someone very happy.

As for my bourbon-swilling son, after moving to Kentucky he also grew to like country music. I haven’t followed him there yet. 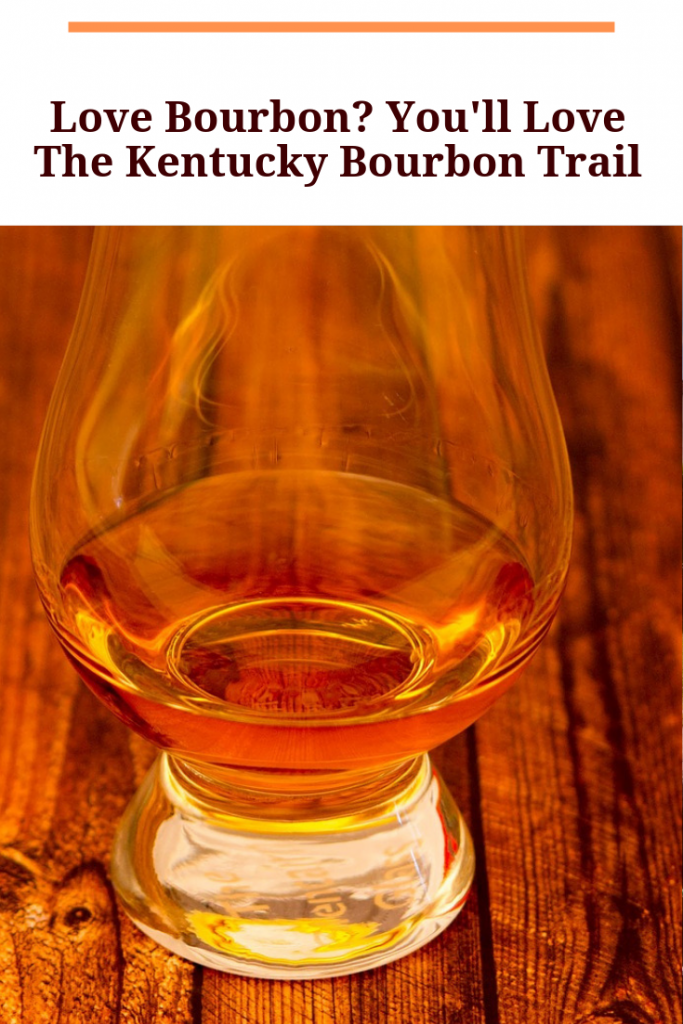