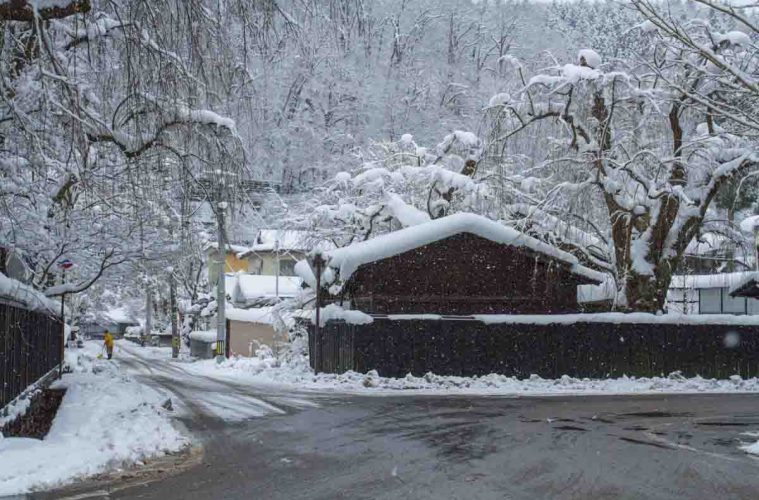 After nearly 24 hours without sleep, I was far from tired, more like a giddy child on my first trip to Japan.

Climbing into the van, peering out in the darkness, I frantically searched for any sign of Japanese culture. My prayers were answered by a most ironic celebration, a firework display at Disney World. Not exactly what I was looking for, but clearly a sign of things to come.

Japan moves the soul like no-other country, and that’s evident from your first step aboard the lauded Japanese ANA airlines. In addition to the attendants’ gold-star service, the flight was surreal. Imagine a guest appearance by Dr. Who, a time machine complete with champagne, and a full menu of American and Japanese food, along with top-notch movies.

The island itself is cause for celebration, especially for someone who rarely travels oversees and enjoys the wonders of nature and architecture. It all began on a bullet train. Yes, that train, the one everybody talks about; the model for countries across Asia and Europe. Shaped like a giant caterpillar, the sleek design can reach maximum speeds of 200 mph. After boarding in Tokyo, we headed north on a three-hour journey to Kakunodate, a Samurai castle town inside the Akita Prefecture. 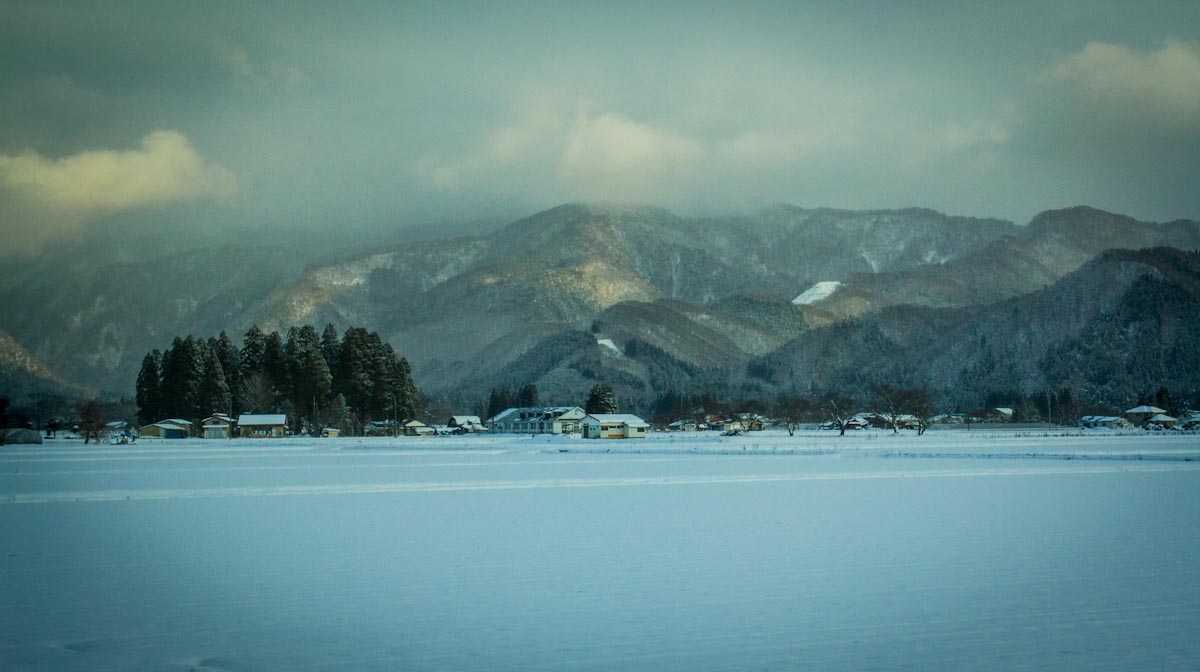 In a busy blur, the train flew past bustling cities crowned with sterling high-rises to daily life in the suburbs, complete with cars and tiny yards. And in the background: the esteemed Mt. Fuji covered in snow. I jumped from seat to seat, photographing the rolling picture show.

It was early December, a moving picture show painted in autumn colors, empty farmlands with glistening silos, and then, like the click of a switch, snow-covered hills and mountain ranges.

Arriving at our destination, the train doors opened, and huge snowflakes began floating gracefully across this fairy-tale village. After all, this was once a castle town, home to the Samurai lords, and the royalty still reigned with an exquisite theater of weeping cherry trees covered in snow. 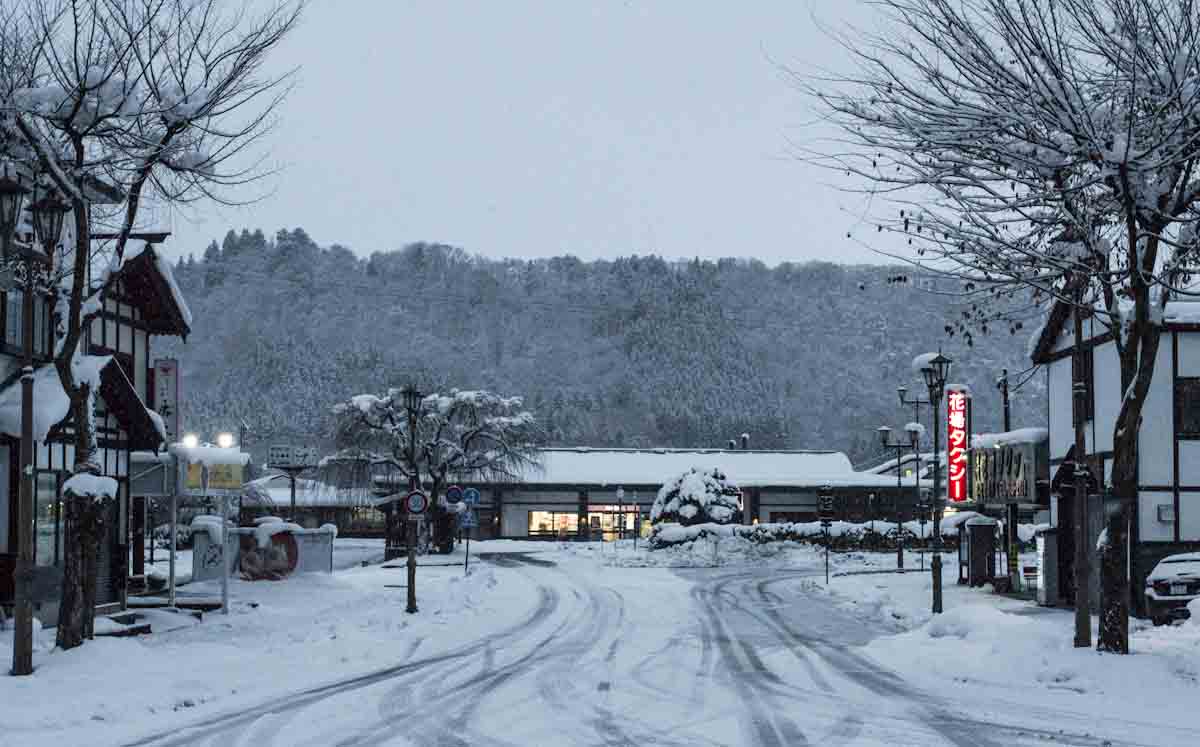 Still known as a castle town, Kakunodate began its reign in 1620 with the feudal lord Yoshikatsu Ashina. The royal hamlet stood atop Mt. Furushiro. Both the castle and town were besieged by floods, fires and multiple disasters. So, it was moved to a more favorable terrain, surrounded by mountains on three sides and open to the south.

As the daylight began to wane, we quickly made our way past the town’s quaint storefronts to the historic district. Once home to eighty Samurai families, it is said that Kakunodate owns some of the country’s most treasured architecture. Both the wide streets and ancient trees bring a stunning display, a chiseled masterpiece of barren branches caressed by fresh-fallen snow. 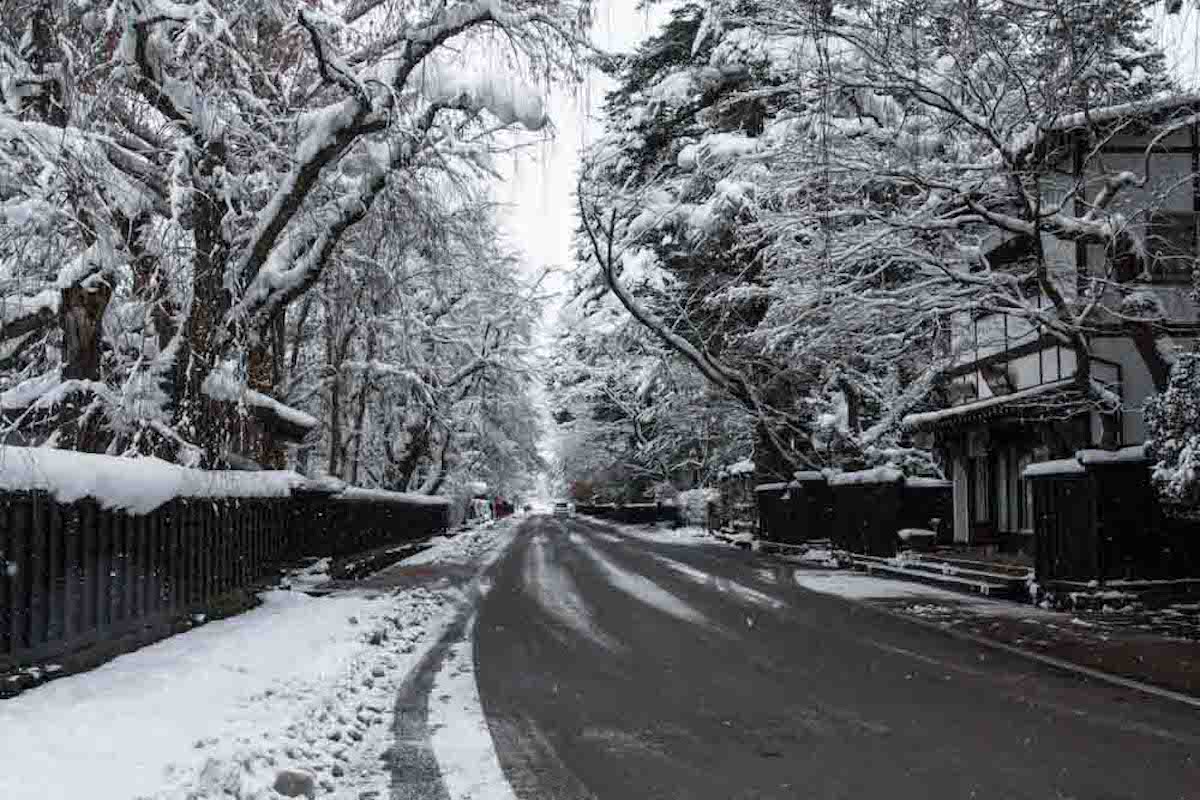 We strolled past several historic homes, museums, along with gift shops and culinary delicacies. Some require admission, while others offer free entry. The Hirafuku Memorial Art Museum features paintings by local artists, making it a must for art enthusiasts. 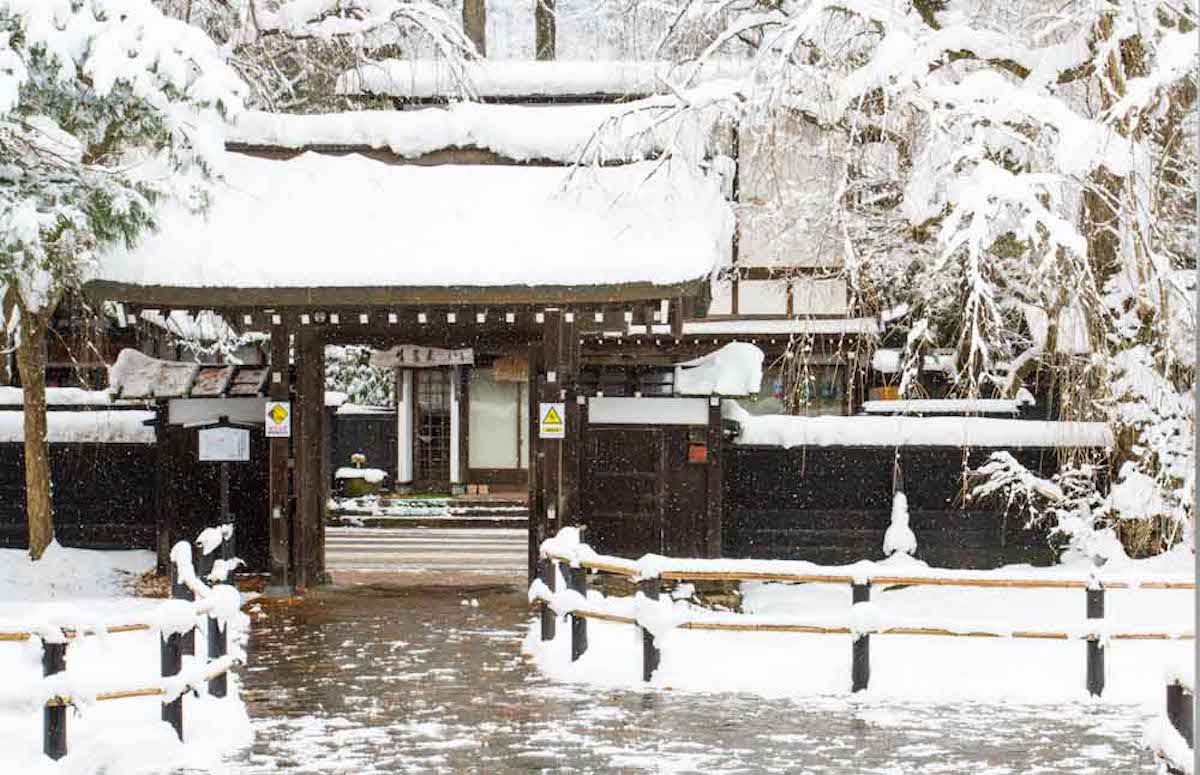 The Denshokan museum offers exhibits on the town’s history as well as on traditional craft making. Its most prominent craft, cherry bark woodworking, can be found in everything from tea canisters to large pieces of furniture. 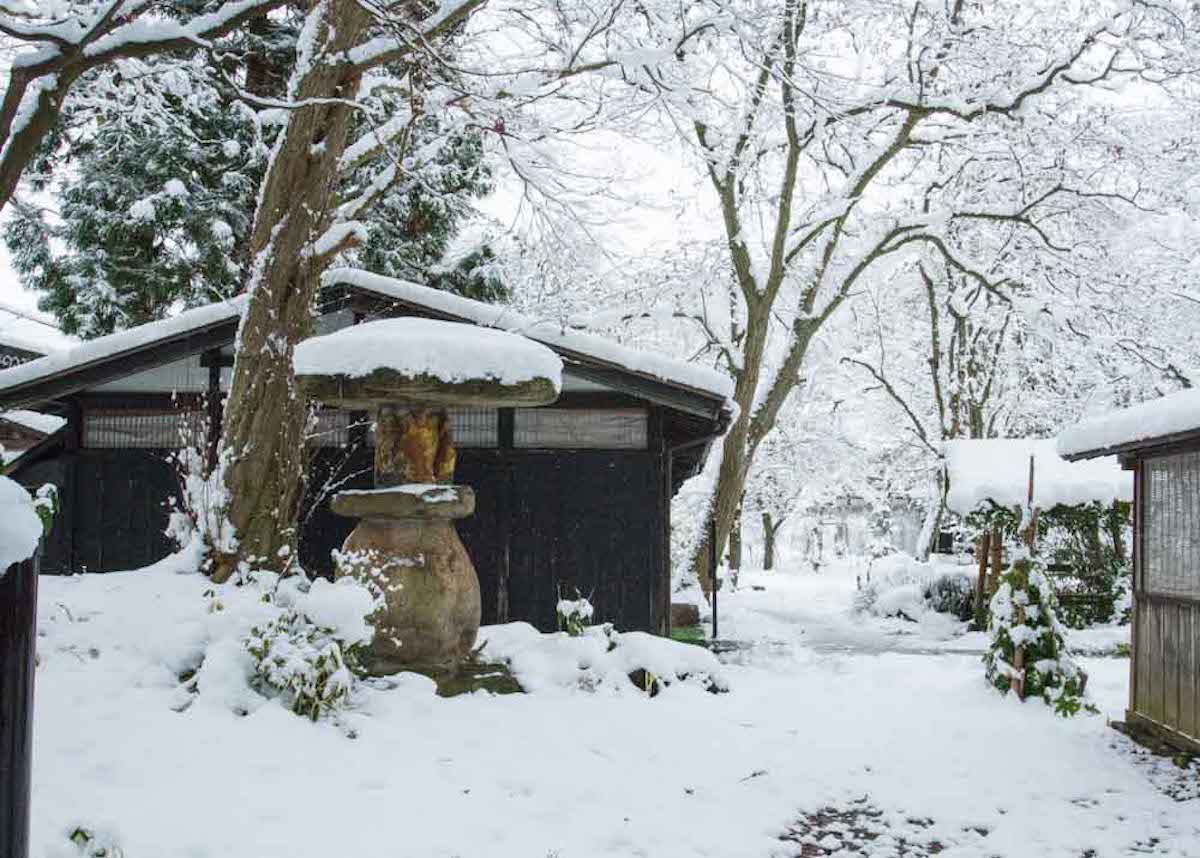 A peek behind the historic home gates 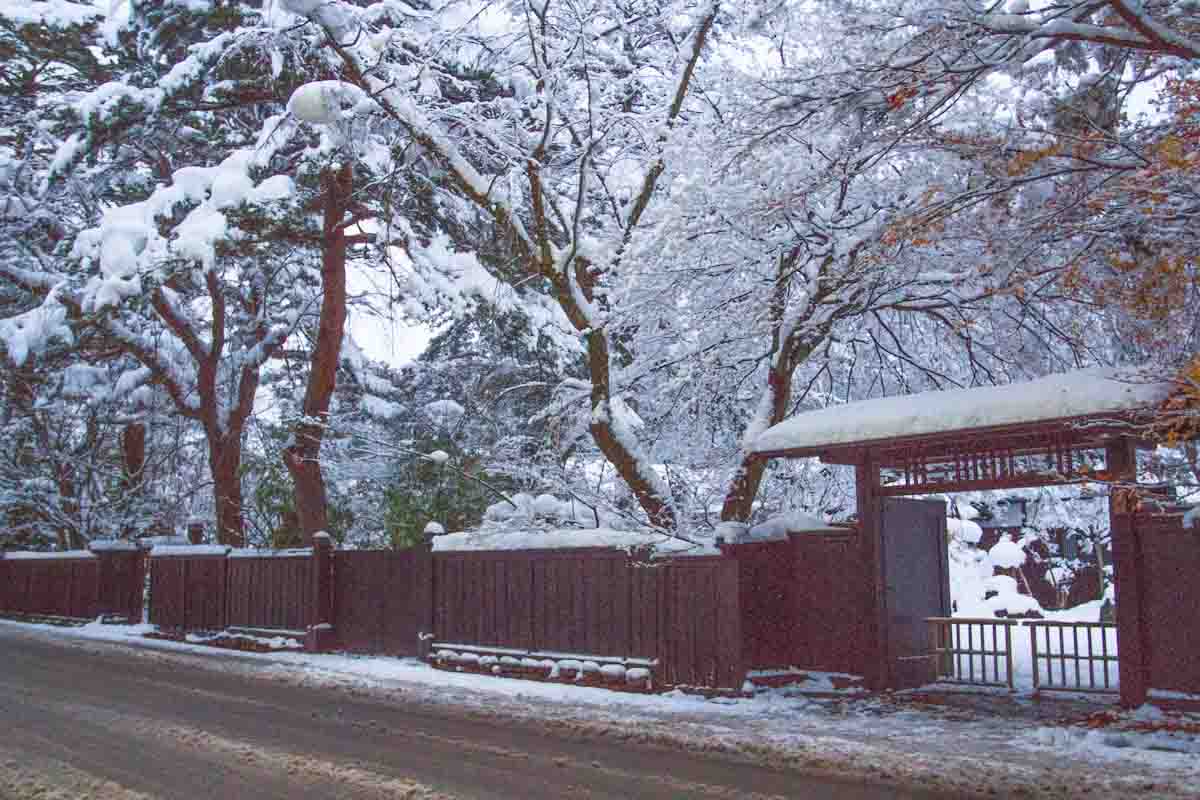 One of the historic district’s most noted homes is the Aoyagi Manor, constructed in 1860. It owns an imposing piece of Japan’s distinct builds, the Yakui Mon Gate. Take note of the roof, a curvaceous build with stunning decorations. In feudal times, people believed the gates reflected the owner’s social prestige.

The manor’s grounds house six separate museums and galleries on a 2.5-acre estate. The main house is one of the most preserved samurai residences in Japan. Also impressive is its armory featuring swords, the Koboshi kabuto helmet, and a double-breasted black-lacquered armor. The gardens are home to 600 species of plants, including the Aoyagi Yaebeni Weeping Cherry—the only tree of its kind in the country—which blooms a purplish crimson every year from late April through early May.

In the spring, known as the Sakura season, nature drapes the town with a whimsical display of pink cherry blossoms. 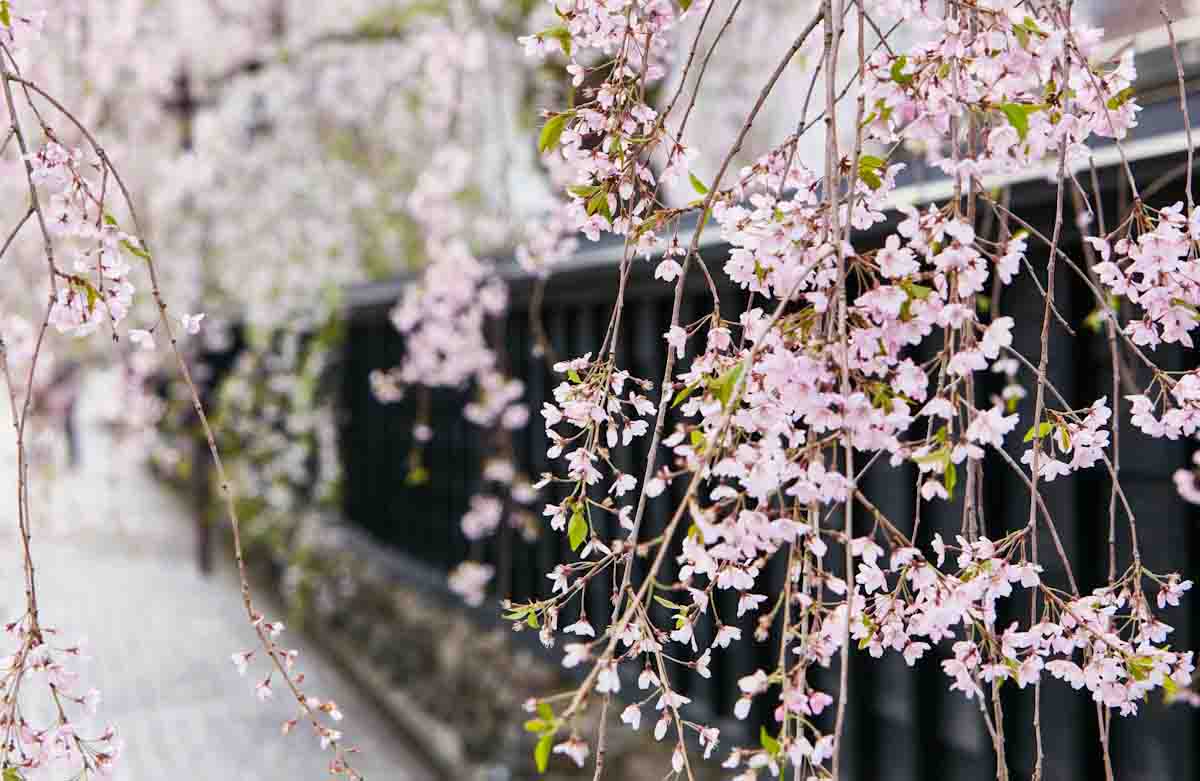 Throughout the samurai manors, the branches of cherry trees form a graceful arch bowing down to the ancient lords. Many of these trees are more than three centuries old, grown from three saplings courtesy of the wife of Satake Yoskiaki, the second lord of Kakunodate, as part of her trousseau. 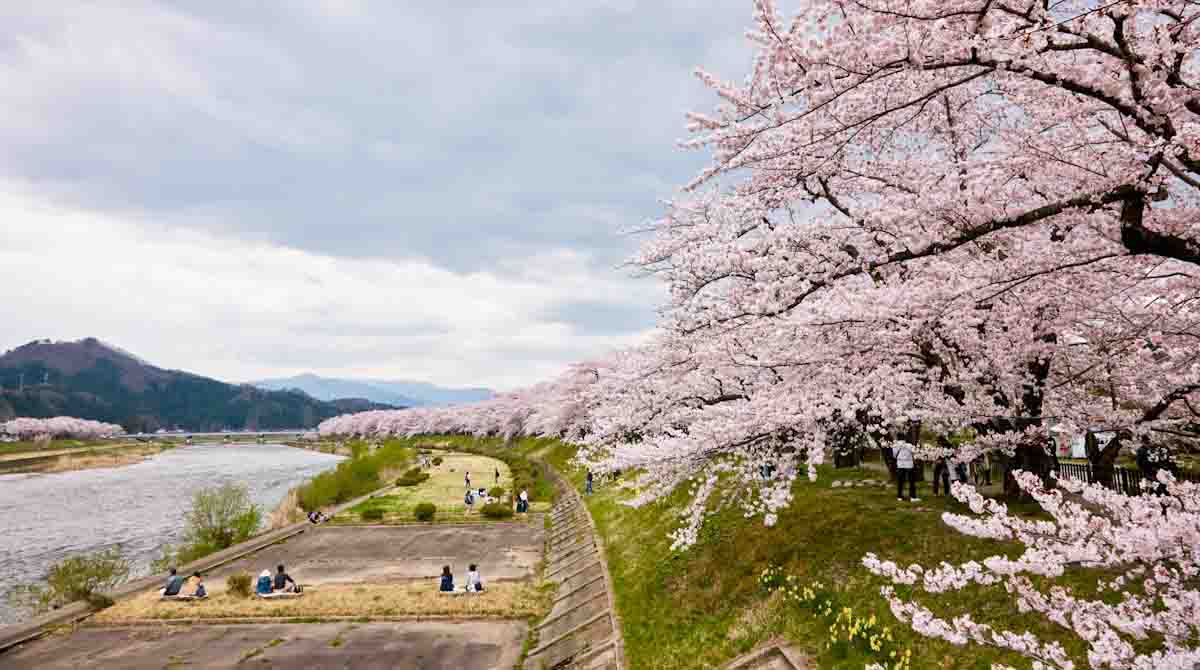 Just minutes away, another 400 cherry trees blossom along the banks of the Hinokinai River. The Somei Yoshino trees were planted on a raised embankment in 1934, and their blooms are perfectly in sync like a chorus of ballerinas. The riverbank offers a natural promenade for picnics and a spot to view others strolling in Japanese gala garments.

Besides the lauded history, the Akita Prefecture is home to the Akita dog breed. In the 1600s, the Emperor of Japan and his Samurai soldiers used Akitas as guardians of their people and property. Only royalty could own these prized dogs.

Even today, generations later, the Akita is still known for its intelligence and strong-willed temperament. The Akita didn’t come to the U.S. until 1937, when the Emperor of Japan sent Helen Keller two Akita puppies as a gift. Today the breed remains popular with many Japanese households due to its devotion to families. 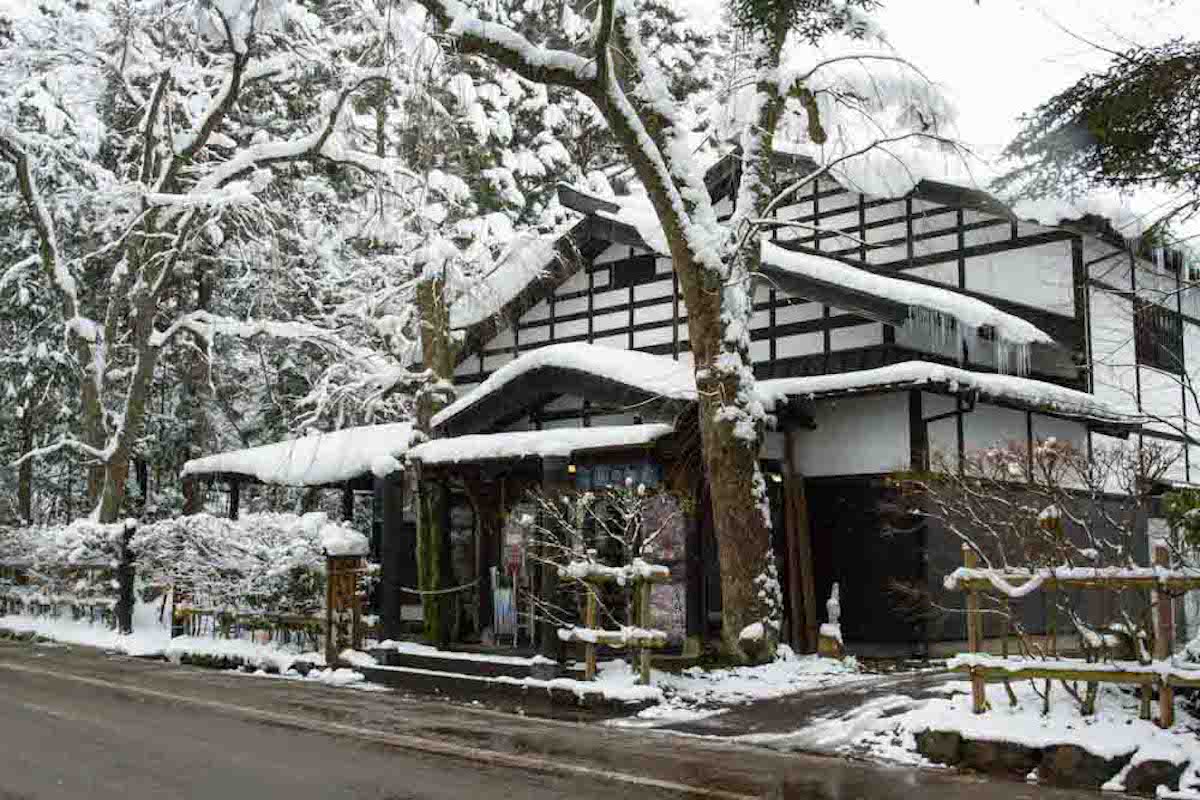 Visitors can find Akita toys and souvenirs in most shops across town and the historic district.

At the Hotel Folkloro Kakunodate, located a short walk from the train station, guests are welcomed to a lobby filled with books, toys, and stuffed animals that reflect its affection for Akita pups. The hotel offers American/European style beds as opposed to the Japanese style of sleeping on the floor. The complimentary breakfast offers both Japanese and American selections. 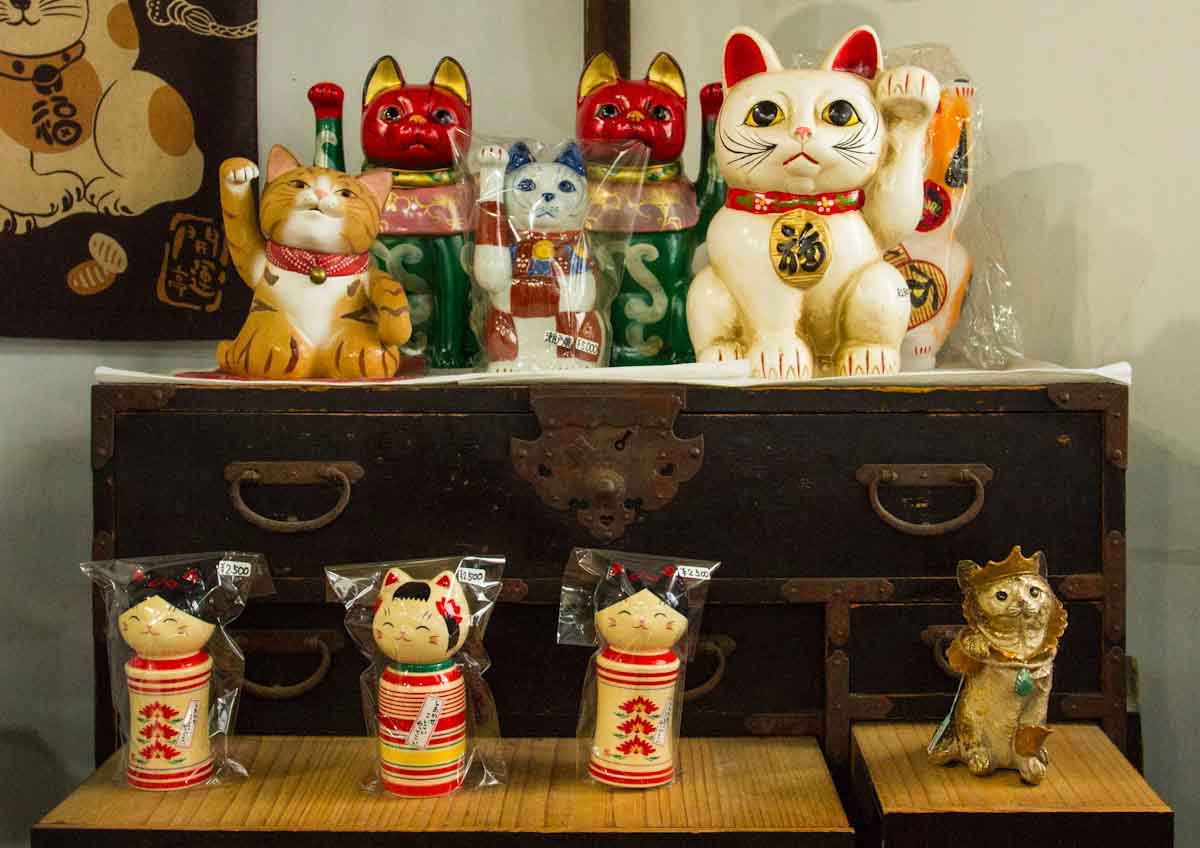 Enjoy museums and specialty gift shops in the historic district including a kitty shop. 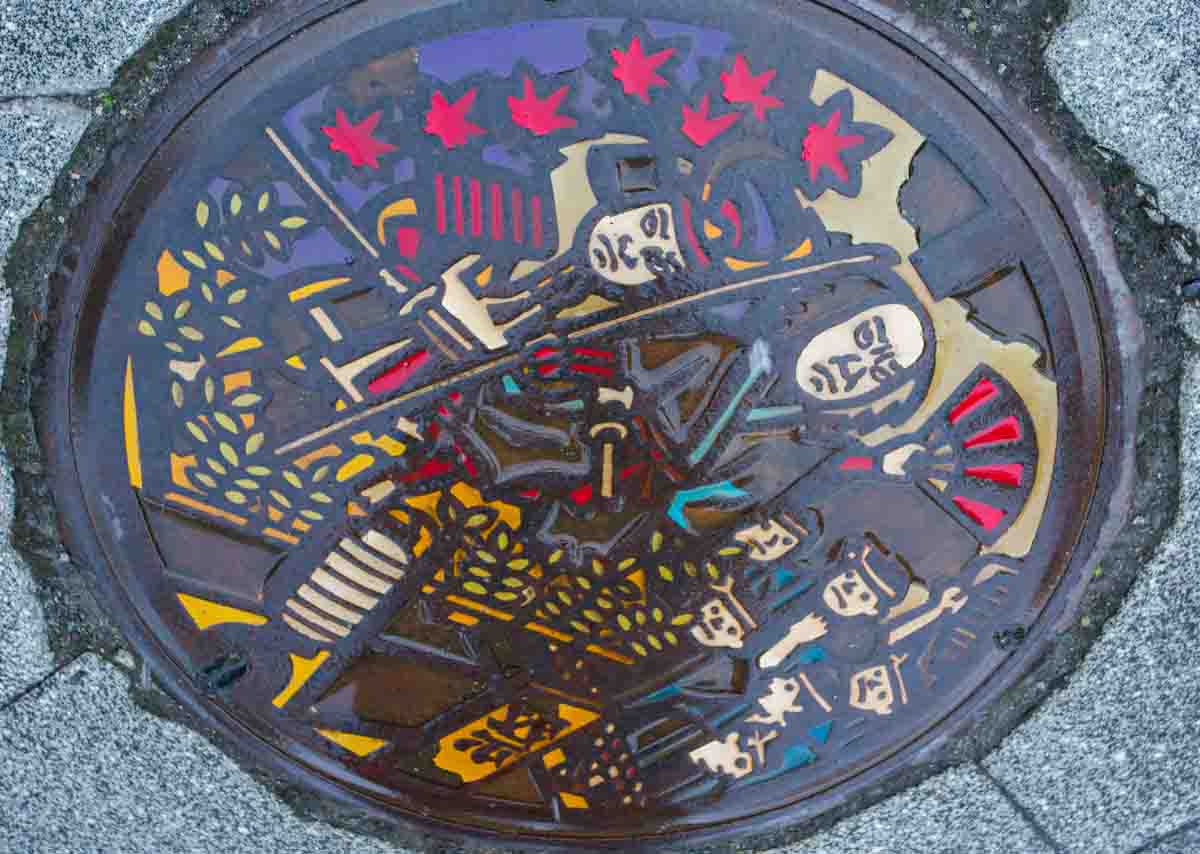 Even the Kakunodate manhole covers are a work of art.

Photo credits: All photos by Deborah Burst unless otherwise noted.

The author was invited to join a press group at a discounted rate courtesy of a Japanese public relations firm in collaboration with the Tohoku Tourism Promotion Organization.

Other resources for visitors 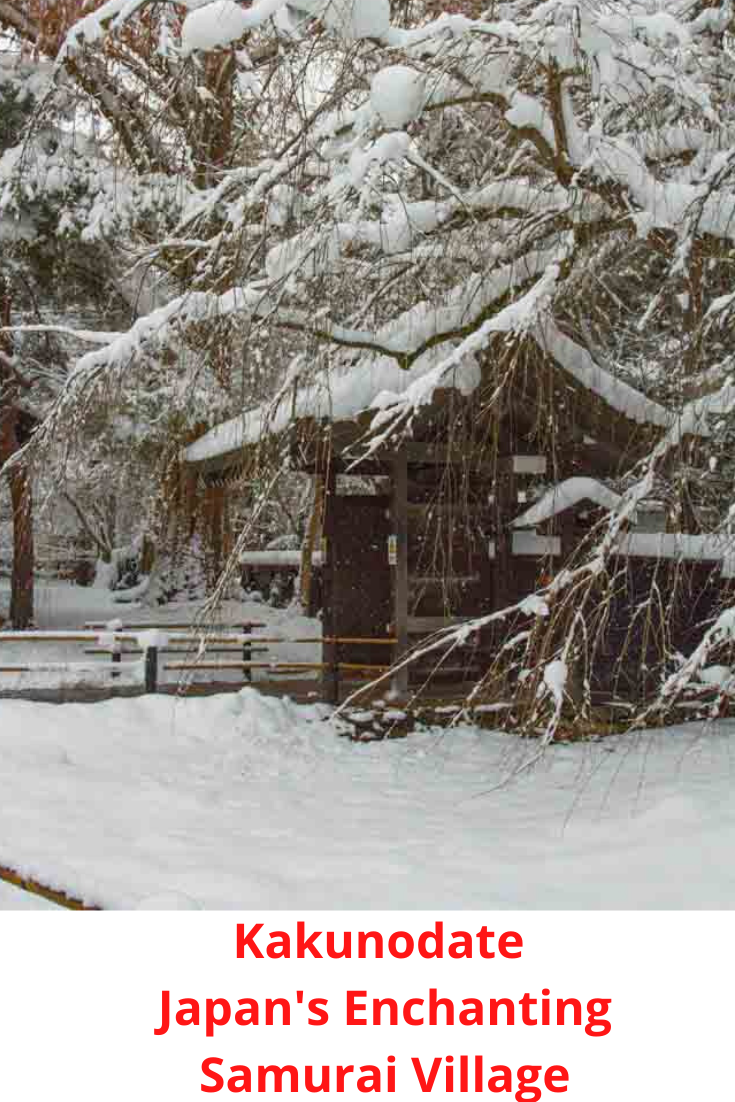