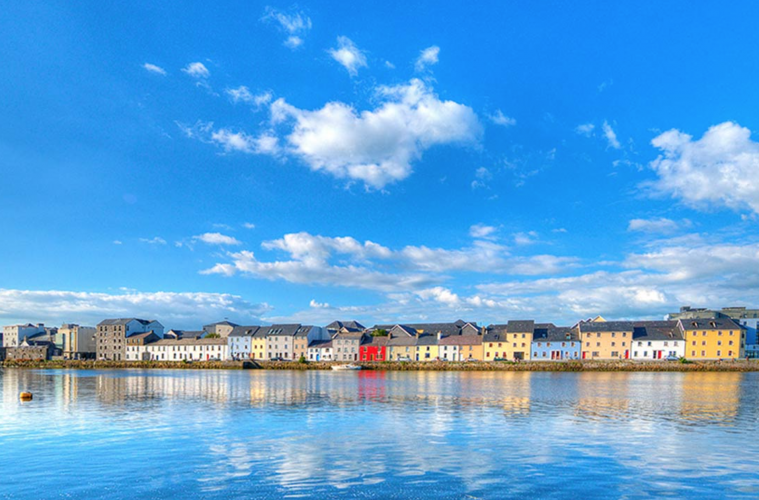 A travel writer with loftier notions—who could boast more elevated literary tastes—would devote part of his or her holiday in Ireland to retracing the footsteps of James Joyce’s Leopold Bloom, the fictional hero of Ulysses, through the streets of Dublin. And fair play to any visitor who embraces such an endeavor. However, that wouldn’t work for me for two reasons: Firstly, despite three solid attempts, I’ve never made it to the final chapter of Ulysses. Secondly, and perhaps more importantly, I’ll take other Irish cities over Dublin any day—one of them being Galway, especially Jack Taylor’s Galway.

Galway, a harbor city of 79,000—which is the European Capital of Culture for 2020—is often described as “the west of Ireland’s bohemian party town.” And that’s very much the Galway that’s reveals herself in the books of one of my favorite Irish authors, Ken Bruen. He’s the creator of the best-selling series of hardboiled crime fiction novels set in Galway that feature bad-arsed, hard-drinking, occasionally unlawful private investigator Jack Taylor.

Not only are Bruen’s books beautifully written, they also double as colorful travel guides to Galway

The sixteen books in the series, which begins with The Guards and concludes with Galway Girl, are absolute page-turners. Not only are Bruen’s books beautifully written, they also double as colorful travel guides to Galway. So, too, could the eponymously titled TV series starring Iain Glen, who will be familiar to fans of Game of Thrones. He also played one of Lady Mary’s short-lived suitors in Downton Abbey.

While international travel restrictions (prompted at time of writing by COVID-19) have temporarily nixed holidays to this much-loved Irish city, you can tour Galway by visiting Jack Taylor’s favorite haunts — page by page. 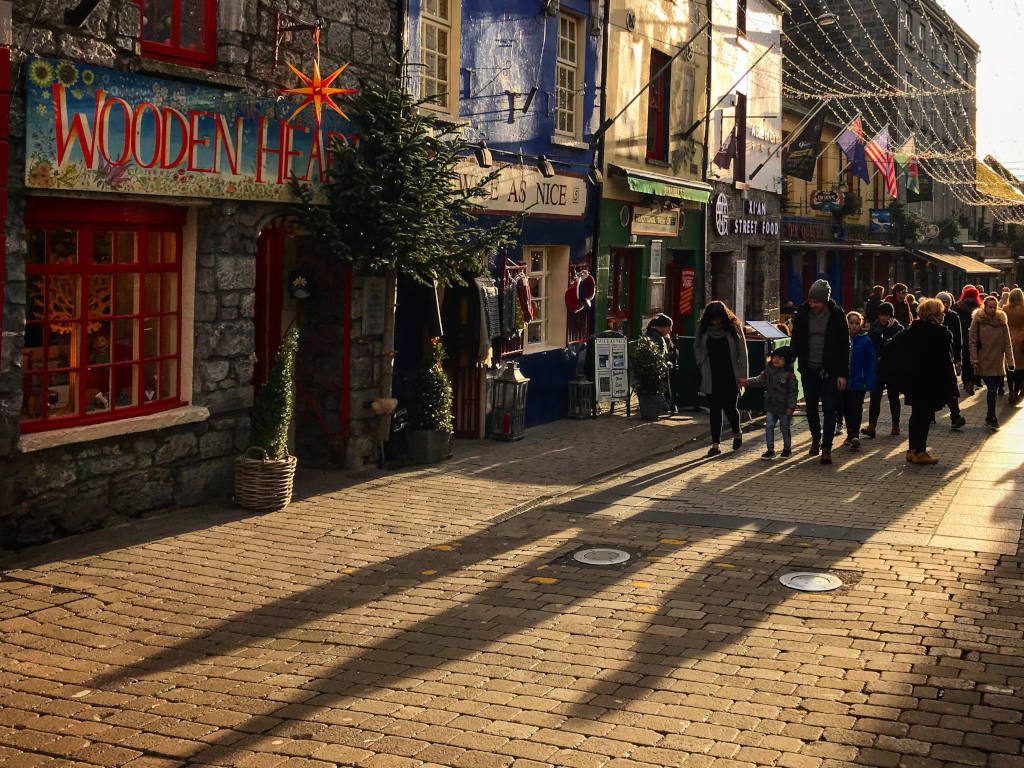 “Galway’s a great walking town. Walking the prom is the favoured route. Used to be only Galwegians followed a particular ritual. You started at Grattan Road, then up past Seapoint. Stop a moment there and hear the ghost of all the showbands past.…Then on past Claude Toft’s, along the beach till you reached Blackrock.” 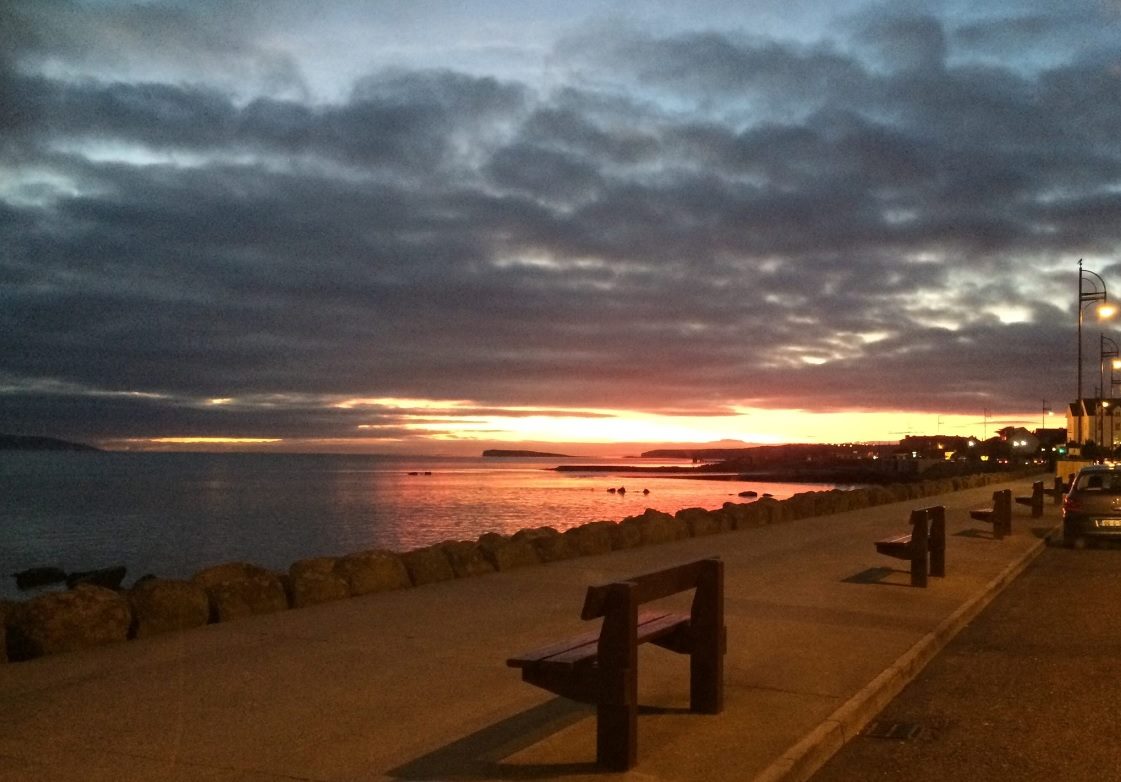 The prom that Taylor refers to is the three-kilometre-long Salthill Promenade, which is a half-hour’s walk from Galway town centre. The Promenade provides some of the best views of Galway Bay and the Aran Islands in the distance. Blackrock is Galway’s iconic Blackrock Diving Tower, one of the most Instagrammed sites in Galway. And it’s close to the spot where Taylor, taking the law into his own hands, tossed a ne’er-do-well criminal into the bay in The Guards.

Exploring by foot is how you’ll discover the city’s endless music—busking in Galway is an art form, the friendliness of Galwegians as they converge onto the green at Eyre Square, the winding lanes of the Latin Quarter, bustling quays, ancient castles and crumbling fortresses, an infinite number of pubs (upscale and sawdust-on-the-floor variety) and scores of bookshops—not to mention a bourgeoning culinary scene that favors seafood.

A passage you don’t want to miss: Kirwan’s Lane, in the heart of Galway’s medieval quarter, where many of Taylor’s nocturnal shenanigans are played out. There, in the midst of the 16th– and 17th-century architecture, you’ll find an excellent restaurant: The Seafood Bar @ Kirwans. 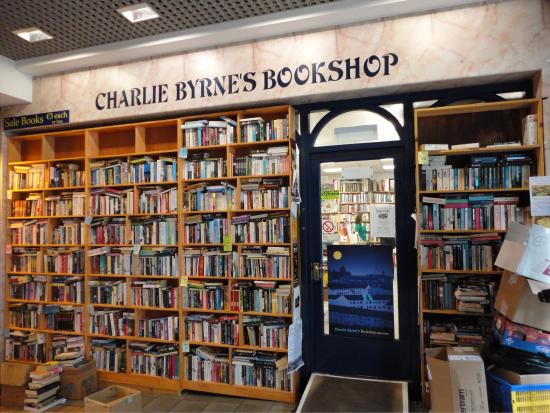 Jack Taylor is a complicated character. While he believes in justice and lays claim to his own brand of integrity, he was in fact kicked out of the police force (the Garda) for punching a politician in the face. His concern for the disenfranchised is heartening. His substance abuse is a bit shocking. Taylor uses drugs the way many of us use Splenda.

He’s also one of the most well-read private detectives you’ll encounter. He recites poetry—from the 1800s to the 1900s—at will. His addiction to booze is equalled only by his addiction to books. He spends much of his time at Charlie Byrne’s. That would be the Charlie Byrne Bookshop on Middle Street, just minutes from Eyre Square and the waterfront. It’s definitely worth a visit.

Another bookshop that figures into Bruen’s series is Kenny’s Bookshop & Art Galleries on Tuam Road. In fact, it also the first bookstore in Ireland to sell the Jack Taylor series long before the books climbed the best-seller list. 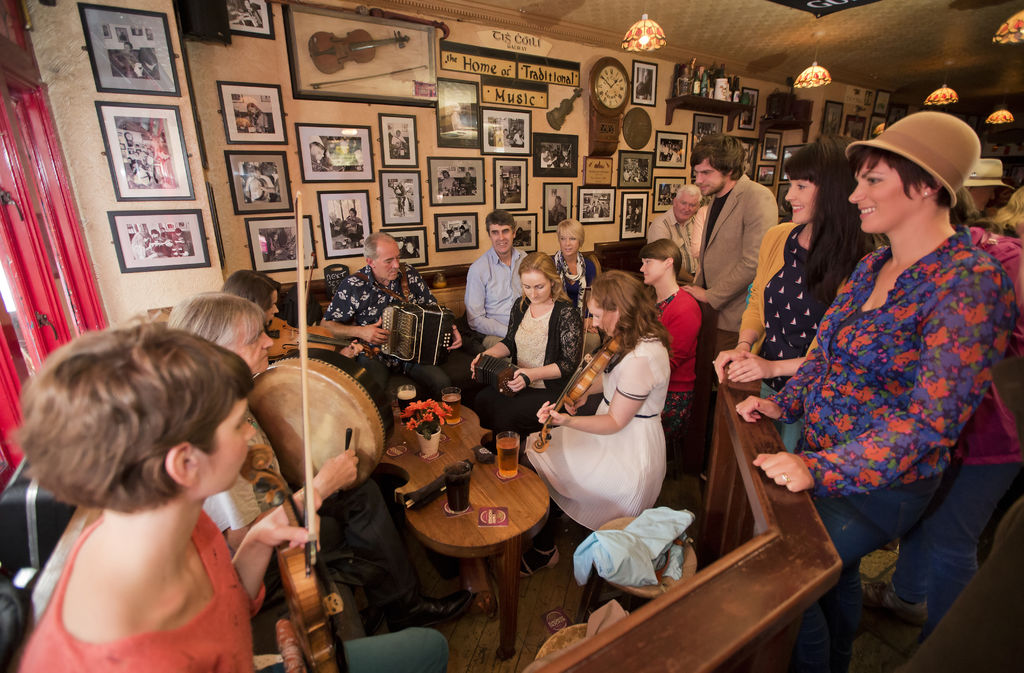 Impromptu music sessions are part of pub life in Galway. Don’t be surprised if a fellow patron gets up to sing in Gaelic

Taylor hasn’t so much a love affair with pubs as a co-dependent relationship; he can’t live without them. The books’ descriptions of pubs—both real and imagined—capture the spirit of the Galway public houses I’ve encountered on my visits to the city. They’re relaxed, unrushed, usually unfanciful and always friendly.

As Taylor describes one of his favourite Galway haunts: “Grogan’s was my office. I sat there most mornings and waited for the world to come knocking.” It’s where he meets up with his first client in The Guards. His description: “Grogan’s is not the oldest pub in Galway. It’s the oldest unchanged pub in Galway… It remains true to the format of fifty or more years ago. Beyond basic. Spit and sawdust floor, hard seats, no-frills stock….Not an easy pub to find. You head up Shop Street, skip Garavan’s, turn into a tiny alley and you’re home.”

Good luck trying to find Grogan’s (it doesn’t exist) – but you can visit The Crane, which stood in for Grogan’s in the TV Series. If you’re looking for traditional Irish music at night, you’ll find it at The Crane. Garavan’s, on the other hand, does exist. It won Ireland’s Overall Best Whiskey Bar of the Year in 2017. It’s on William Street near the city centre. Taylor also meets up with his mates occasionally in Roisin Dubh. You can’t miss it—it’s the lavender-painted building on Dominick Street in Upper Galway. The Roisin is home to comedy nights, music series and festivals. If international artists are performing in Galway, you’ll find them at the Roisin.

The grande dame of Galway hotels 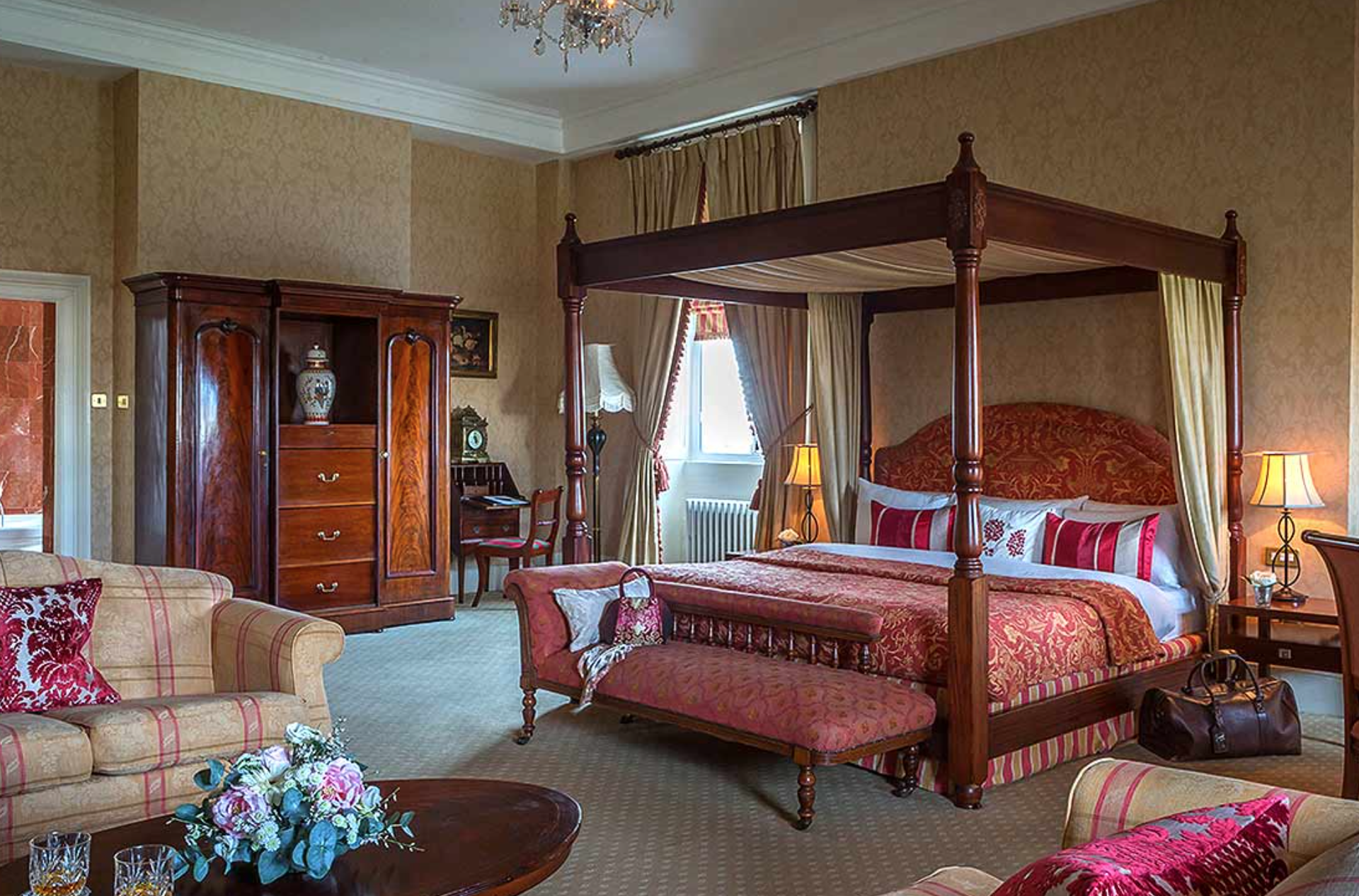 Luxury in the heart of Galway. The Hardiman is located on Eyre Square in the centre of Galway (Credit: The Hardiman)

Overlooking Eyre Square is an elegant hotel once called The Meyrick, where I spent a few nights in 2017. The hotel’s motto: Victorian grace with Irish hospitality. It’s since been reincarnated as The Hardiman, which has maintained the same high standards. While Taylor doesn’t stay there, he does cross its doors.

He narrates: “The Meyrick Hotel lies at the bottom of Eyre Square and the new renovations should have made it imposing. All that solid granite, the iron railing, but to me it was still the hotel of my youth. I pushed through the freshly polished glass door, saw Stewart in the lounge. A white porcelain teapot, matching cups before him. ‘You ain’t never going to be able to afford this’.” 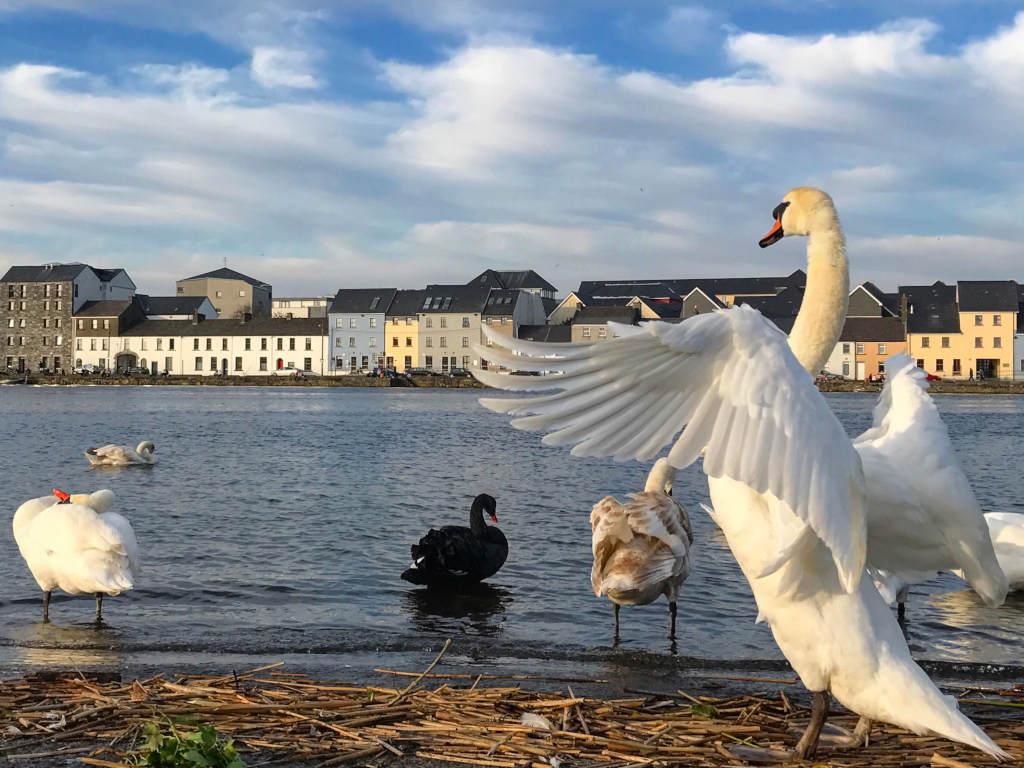 The resident swans, which make various appearances in the Jack Taylor crime series, are worth a visit to the Claddagh, which is just across the river Corrib

The Claddagh, an area on the western shores, where Galway Bay meets the River Corrib, is woven into numerous storylines in the series. The former fishing village, outside the old city walls, is a 20-minute walk from the city centre. Simply take Wolfe Tone Bridge over the river, and you’re there. Curiously, the Claddagh is known for its proliferation of swans, which figure, quite gruesomely, in the second installment of the series, The Killing of the Tinkers. I promise no spoilers.

Taylor is not what you’d call a foodie. Fish ‘n’ chips are a mainstay in his diet. But he makes plenty of references to the GBC, which is the Great Bakery Company on Williamsgate. And, yes, it’s real—and waiting for you. 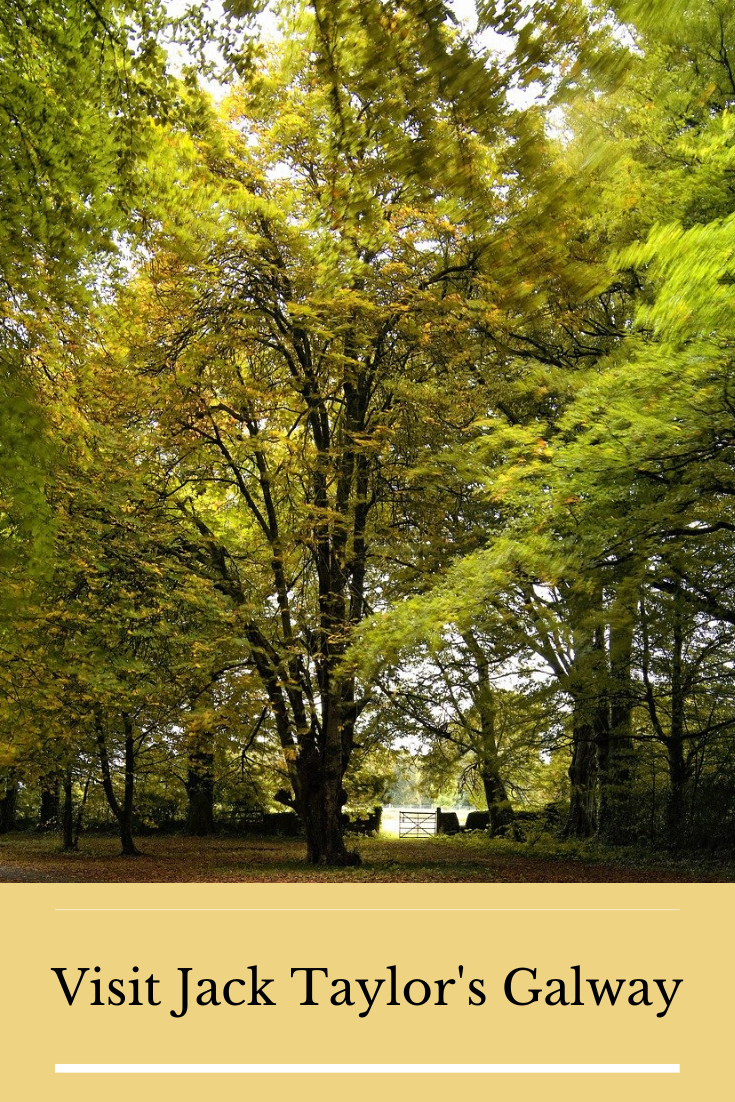