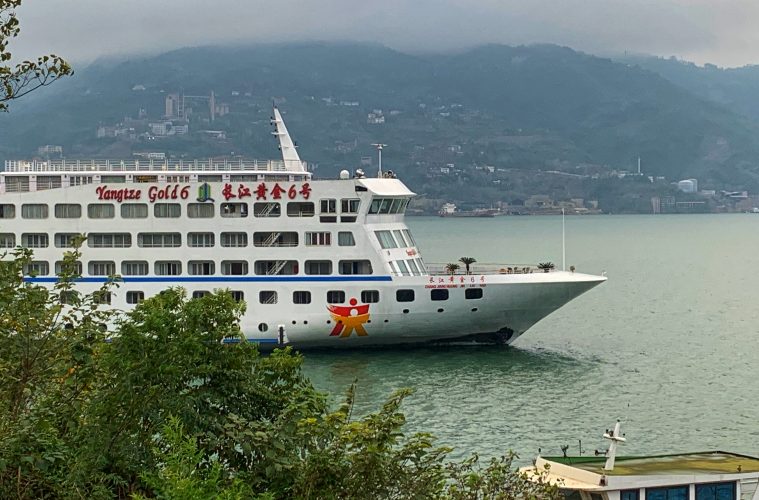 Is a Yangtze River Cruise Worthwhile?

Lured by the prospect of seeing the world’s largest hydroelectric power station—the somewhat controversial Three Gorges Dam—I enthusiastically sign on for a Yangtze River cruise, not particularly caring what else I will be experiencing on this trip to China.

A lifelong environmentalist with a keen interest in sustainability, I jump at the opportunity to see how China managed to relocate, by some estimates, some four million people, submerge more than a dozen cities and even more towns and villages and tame (or at least make a viable attempt to) the longest river in Asia.

So focused on getting to the Three Gorges Dam, I barely pay attention to what I might be touring on my way to it. For a while, I forget that I am headed to the land of spirits and dragons.

Getting to the Yangtze River

I have time to focus on the details during the long 24 hours it will take to make my way from New York to Chongqing, a municipality of roughly 30 million people almost smack-dab in the center of China. My journey begins with a flight from JFK in New York City to Hong Kong that lasts just over 16 hours, long enough for two meals, some snacks and about eight in-flight movies. This is a long haul. Pray that if you are flying coach, you do not score a middle seat.

The one benefit to such a long journey is that it affords me time to read up on what I am about to learn about in person.

While we all may agree that we prefer hydroelectric power to the sort generated by fossil fuel, it doesn’t always come without a certain measure of destruction. Animal habitats, historic sites and human lives were all uprooted for a cause.

The more than milelong Three Gorges Dam, which took some 20 years to build, finally opened in 2009.

It can be easy to judge the decision-making process of an authoritarian government and easier to overlook past projects of certain great minds in the United States that actually changed the direction of the Chicago River’s flow away from, rather than into, Lake Michigan. Even the United States’ own big dams—hello, Hoover!—did not exactly arrive without a certain measure of negative impact.

With a four-hour layover in Hong Kong before my almost two-hour flight to Chongqing, I recharge at Starbucks, concerned that it could be my last decent cup of coffee for a while. I didn’t sleep much on the crowded flight to Hong Kong but pass out almost immediately once I board the plane for Chongqing. I am grateful that a tour guide with a car will be greeting me at the airport because, by this point, my mind pretty much is mush. 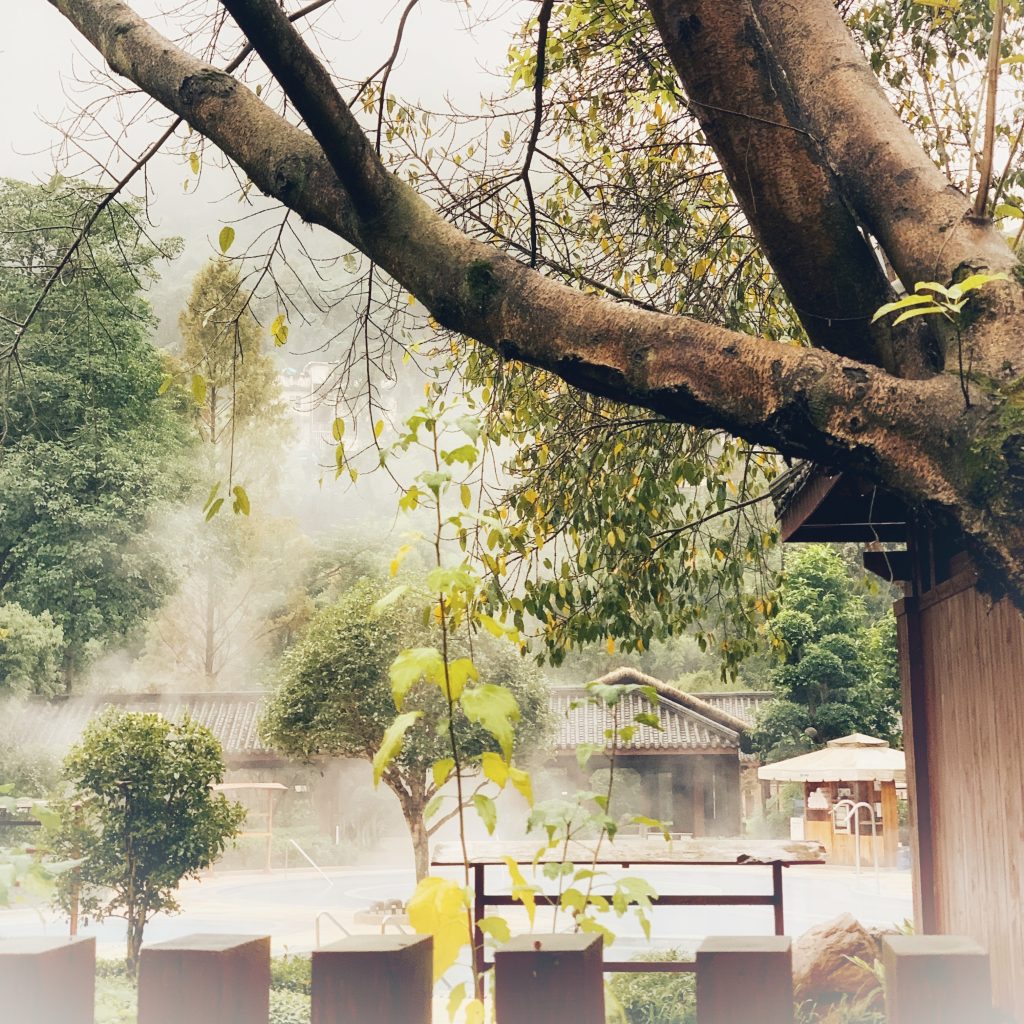 Early morning mist at the hot springs in Tongjing

The bliss of hot springs

So I take right to the misty atmosphere at the hot springs at Tongjing River Hotel, where I spend my first night. The next morning, I feel like a time traveler as I head in misty rain to the main lodge for breakfast accompanied by a woman holding an umbrella for me. I motion that I can handle an umbrella all on my own. She insists. On my way, I observe female street sweepers wearing dresses keeping the already immaculate drive at this resort even more clean.

At breakfast, I am grateful that coffee is both available and actually tastes pretty decent. The coffee arrives in what I consider to be a mini-cup, nowhere even near a ‘small’ one by Western standards. I refill again and again and again. All I really know so far is that I am liking my entrance to China, and I haven’t even gotten anywhere near the Three Gorges Dam yet. 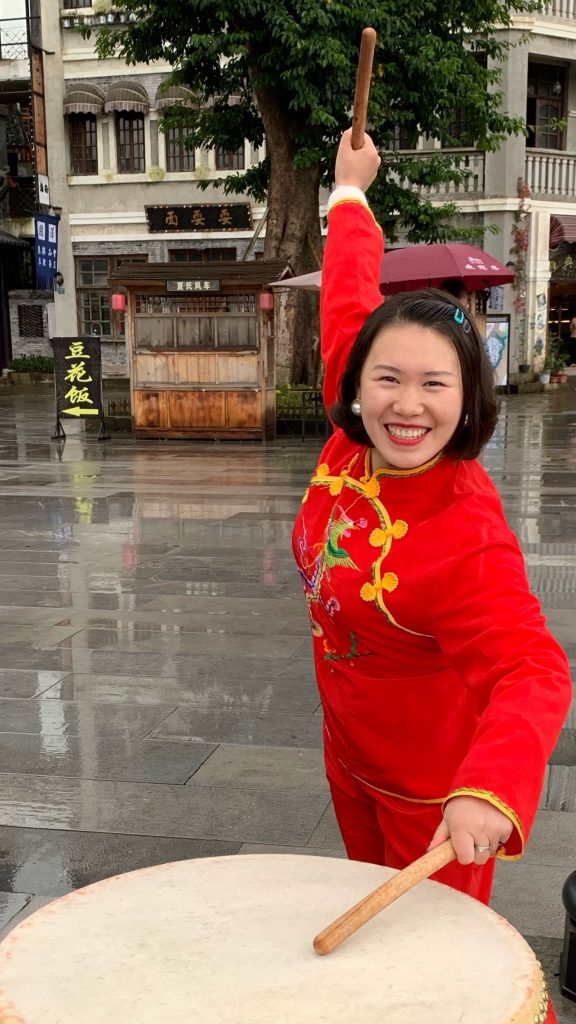 Continuing my walk back in time, on the agenda today is a visit to what is called Chongqing Liangjiang International Movie City, sort of like Disney’s Hollywood Studios absent the rides. Here we have a re-creation of pre-Communist China replete with rickshaws, men wearing fedoras and trench coats, and women dressed in the traditional Chinese dresses known as the cheongsam (in Cantonese, anyway; in Mandarin, the clothing is called qipao). I am reminded how many entities were trying to get a piece of China before the Chinese people reclaimed the place as their own. 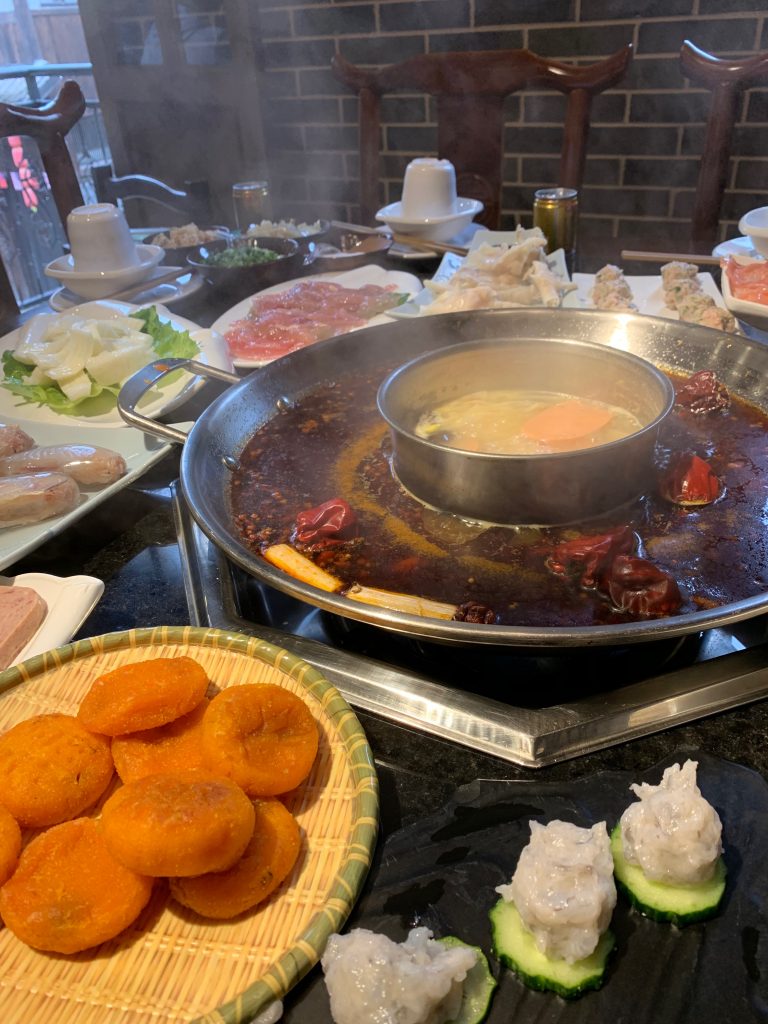 After a lunch of a traditional Chongqing hot pot—diners boil their own meal in broth and then season meat and vegetables with oil and spice—my group heads to the Three Gorges Museum for an introduction to the ecology and ancient history of the region. Near sundown, we finally board the Yangtze Gold 6.

The first stop on this Yangtze River cruise is in Fuling, where passengers disembark and walk to the nearby Underwater History Museum of White Crane Ridge. Inscriptions in stone, carved over the millennia by people along the Yangtze, can be viewed here. Although I do not understand the writings, I am in awe of these creations. At one time, the carvings were visible only when the water of the Yangtze was low. Markings also indicated water levels, creating an ancient record of use to environmentalists today. 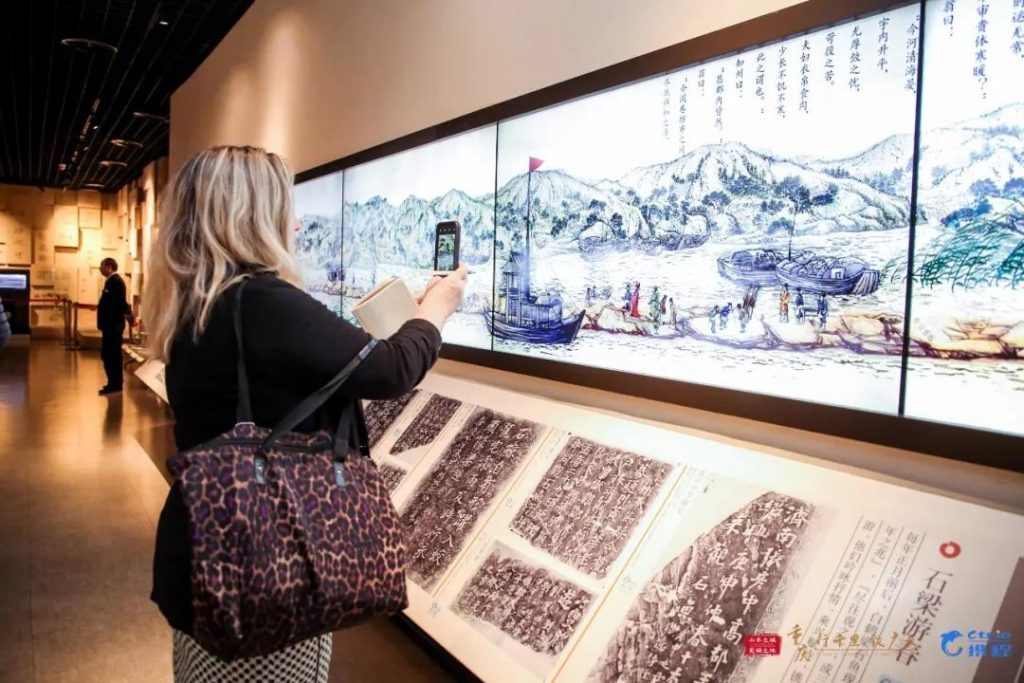 Next up on this Yangtze River Cruise: The Lights of Wanzhou

Our next stop is Wanzhou, where we are fortunate to have tickets to the Concert of World Great Rivers, a performance celebrating the Yangtze River and other major ones. Afterward, a festival of lights introduces visitors to the impressive skyline of Wanzhou, which, amazingly enough, is a district still within the municipality of Chongqing.

In all, Chongqing encompasses almost 32,000 square miles. Chongqing is not part of a province within China but, instead, is under the direct administration of the central government. 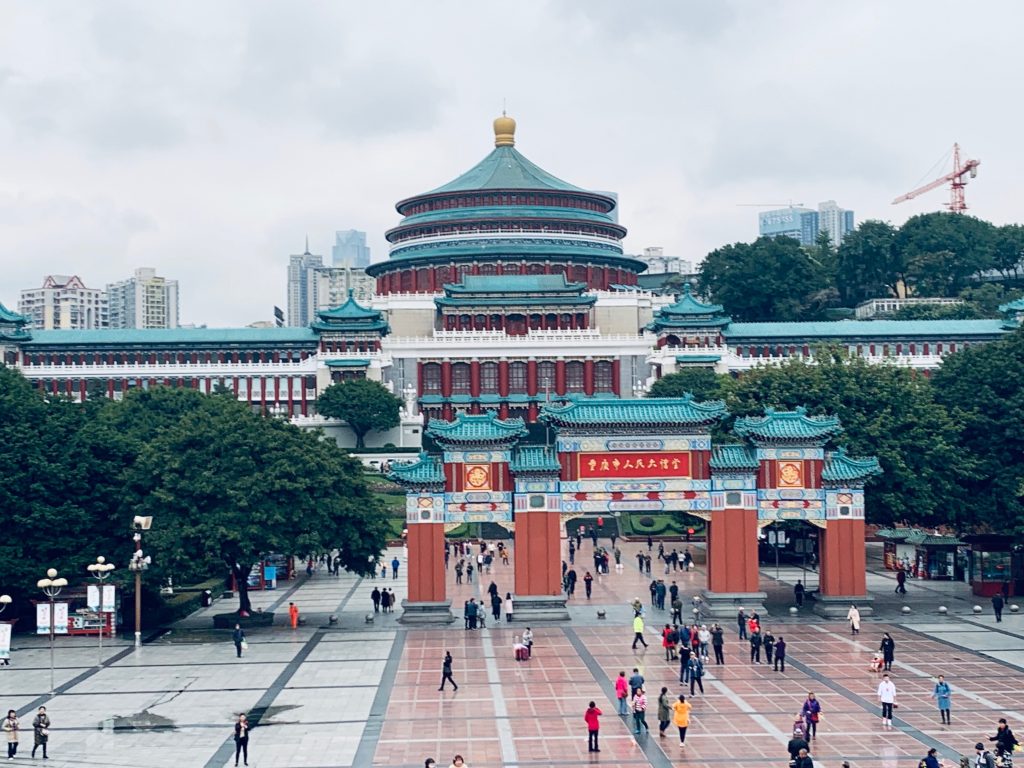 People’s Square opposite the Three Gorges Museum in Chongqing

Having obtained some physical comfort via hot springs, and by now learning a little history and a bit of environmental science on this voyage, my next experience is a more soulful one as I visit Baidi Cheng in Fengjie. Built around the year 25 C.E. by an emperor who observed white smoke in the shape of a dragon (thus giving White Emperor City its name), the temple built here also features tablets full of poetry. A peaceful place on the Yangtze river, White Emperor City also offers visitors a view of Qutang Gorge, the first gorge on the way to the dam.

Photo credits: Photo of Lori Tripoli at Underwater History Museum courtesy of Ctrip. All other photos by Lori Tripoli. 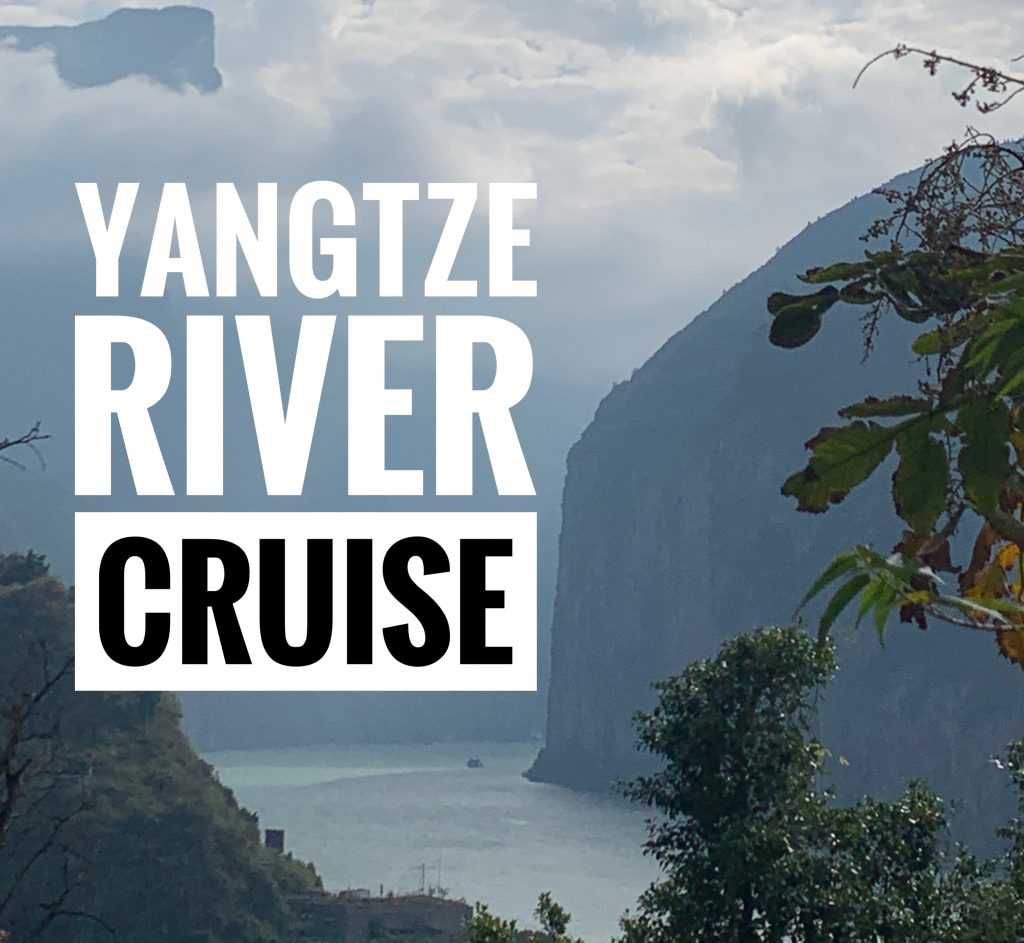