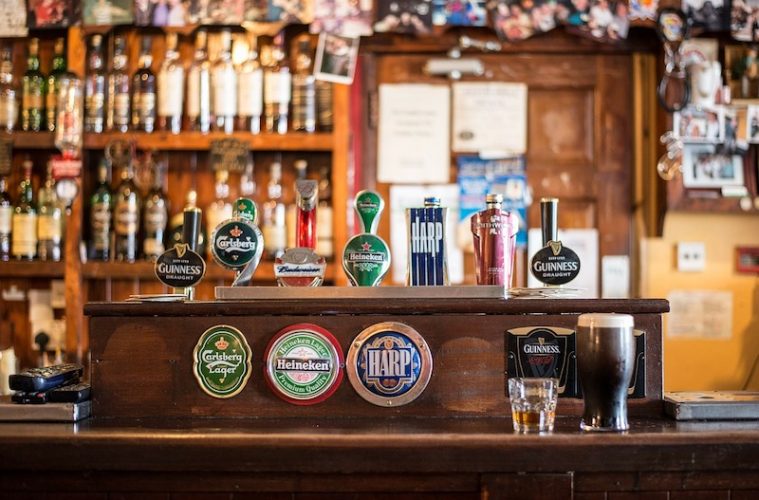 Pour Me a Guinness! Irish Pubs in Santa Barbara

Oh yes. If you are Irish (or are just a devotee of good Irish fare savored with a pint of Guinness), you’ll be pleased to know that when traveling to or through Santa Barbara, California, you will find some stellar Irish venues downtown. 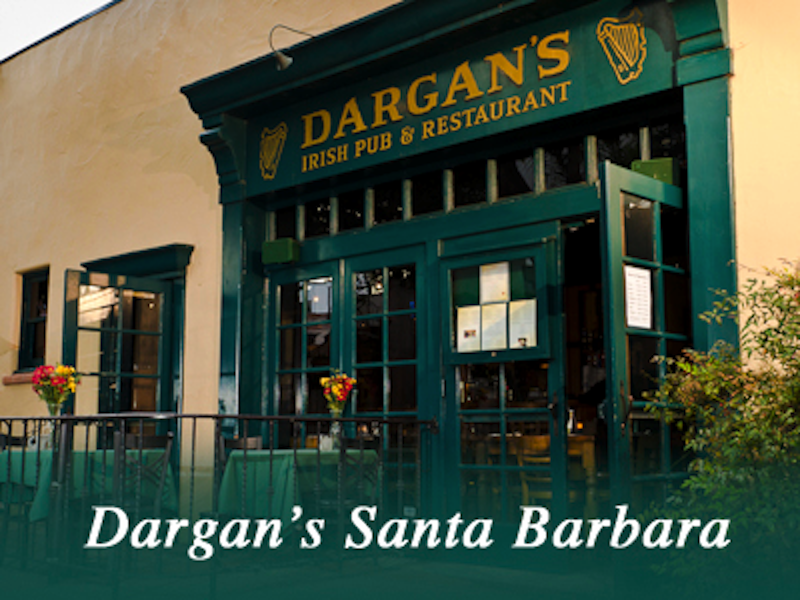 Dargan’s in Santa Barbara was established in October 1997, but the name Dargan’s has been associated with public houses in Ireland since the beginning of the 20th century.

In 1927, Lawrence Dargan built a pub and grocery to serve the small population of Cookstown, a market town in the north of Ireland. He and his family ran a successful business, well known locally as a center of Irish traditional music and craic (Gaelic for good times).

When Lawrence retired his son Benny took over the business. The tradition has spanned three generations, with Paul Dargan, who moved from Ireland when he was 21, now the proud owner of Dargan’s in Santa Barbara.

Paul Dargan’s authentic Irish Pub on East Ortega Street in the beautiful beach city of Santa Barbara packs them in on St. Patrick’s Day, as well as every other day. Since its opening, Irish musicians and dancers have entertained patrons. The menu includes original recipes from Paul’s mother, who was from the Belfast, Ireland, area.

The food is a bit more formal than the average run of the mill pub. The Guinness onion soup with Gruyere cheese is quite amazing. They serve a hearty lamb shank covered with homemade gravy, but also offer baked beans with bangers and a variety of entrees, sandwiched, appetizers and salads. 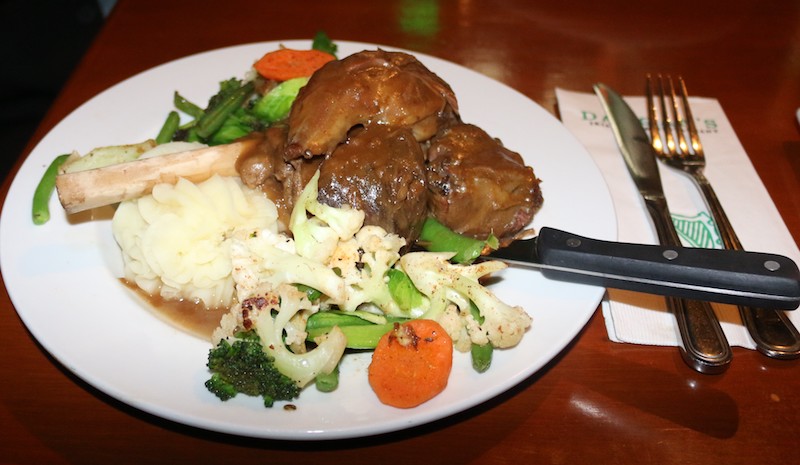 Dargan’s showcases an impressive collection of fine Irish whiskey, and a respectable variety of Irish and domestic beers and ales including Smithwick’s Ale from Kilkenny; Harp Lager from County Louth; Boddington’s from Manchester, England; Stella Artois from Belgium; Guinness direct from Dublin; and Manners Irish Apple Cider from Tipperary.

The atmosphere at Dargan’s is upscale Irish all the way, with a wonderful wood paneled pool hall in the back, and a cozy fireplace room for dining with friends and family, while enjoying live Irish entertainment.

2) Irish music to go with your food

La Arcada Bistro is a local family-owned restaurant. The owners Willie (originally from Ireland) and Trini Quinn (originally from Mexico) met in Santa Barbara and fell in love. Willie and his wife Trini took over the La Arcada Bistro on State Street ten years ago and turned it into an inviting restaurant where live Irish entertainment is enjoyed on the patio throughout the week. 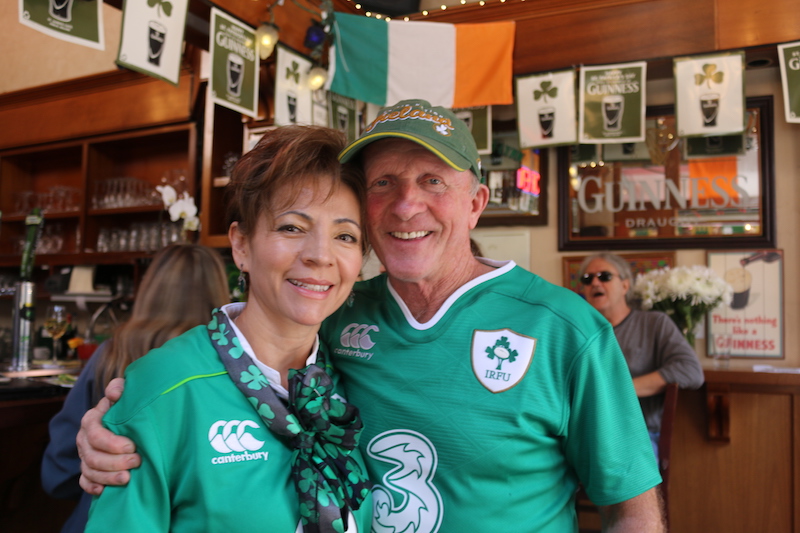 The industrious couple have two daughters, Aoife and Brigid Quinn, who perform as The Foggy Dew Band. The girls are also accomplished Irish dancers and perform non-stop on March 17th. Another group who performs regularly is Shepherds Pie Band.

Willie’s authentic Irish plates are from the area south of Ireland, and it is the exact food my grandmother and aunts cooked during their lifetime.

It is very nostalgic for me to dine on Willie’s corned beef and cabbage or lamb stew. However, Trini has helped introduce dishes from around the world. Their California cuisine offers a special emphasis on Mexican and European dishes. A perfect Guinness is poured every five minutes in this lively meeting place, and the atmosphere is fun and fanciful. 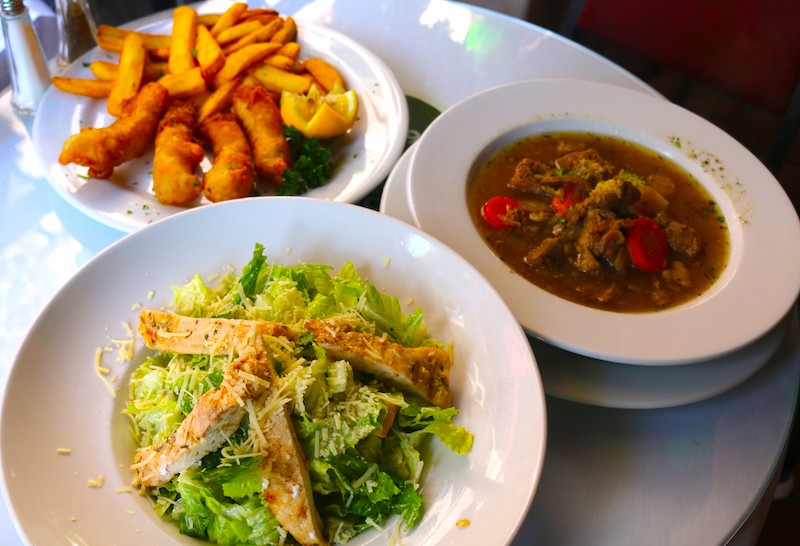 Breakfast, lunch and dinner are served; seating is available inside or on the patio, where diners get an up close and personal view of the bands who are performing during lunch or dinner.

Last but not least is a place considered to be the best Irish bar in Santa Barbara.

The James Joyce at 513 State Street was the first Irish bar in Santa Barbara, opening in 1996. This venue is very reminiscent of bars I’ve visited in Dublin with wooden everything, and offering favorite Irish beers and ale on tap. 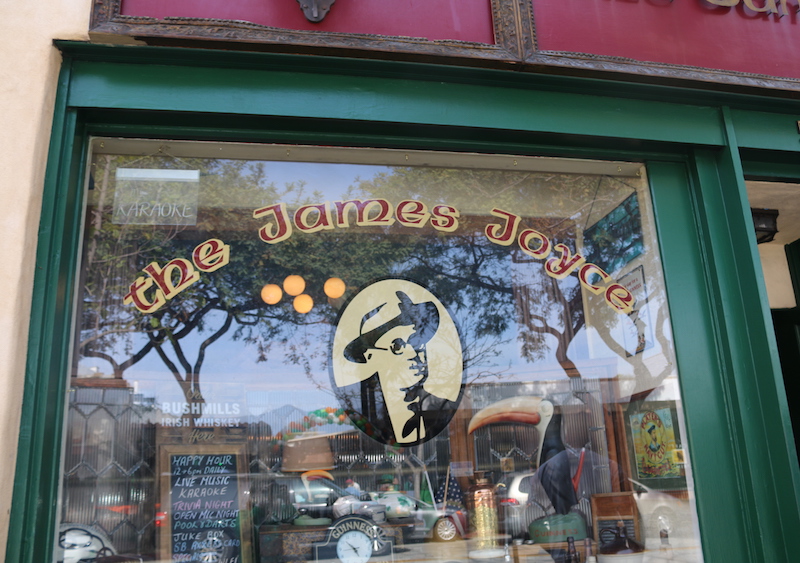 Entrance to The James Joyce

It’s a place where people enjoy quiet conversations in the afternoon, and rowdy everything as the night goes on. There are very few places to sit down, and not unlike the real Irish watering holes in Ireland, people stand in crowds and order drinks, which are then passed back to them. Local musicians provide entertainment here six nights a week.

It is always fun to watch the bartender at James Joyce pour a perfect Guinness pint or make a lovely Black Velvet (a Guinness and cider beer cocktail, known as a poor man’s Black Velvet). 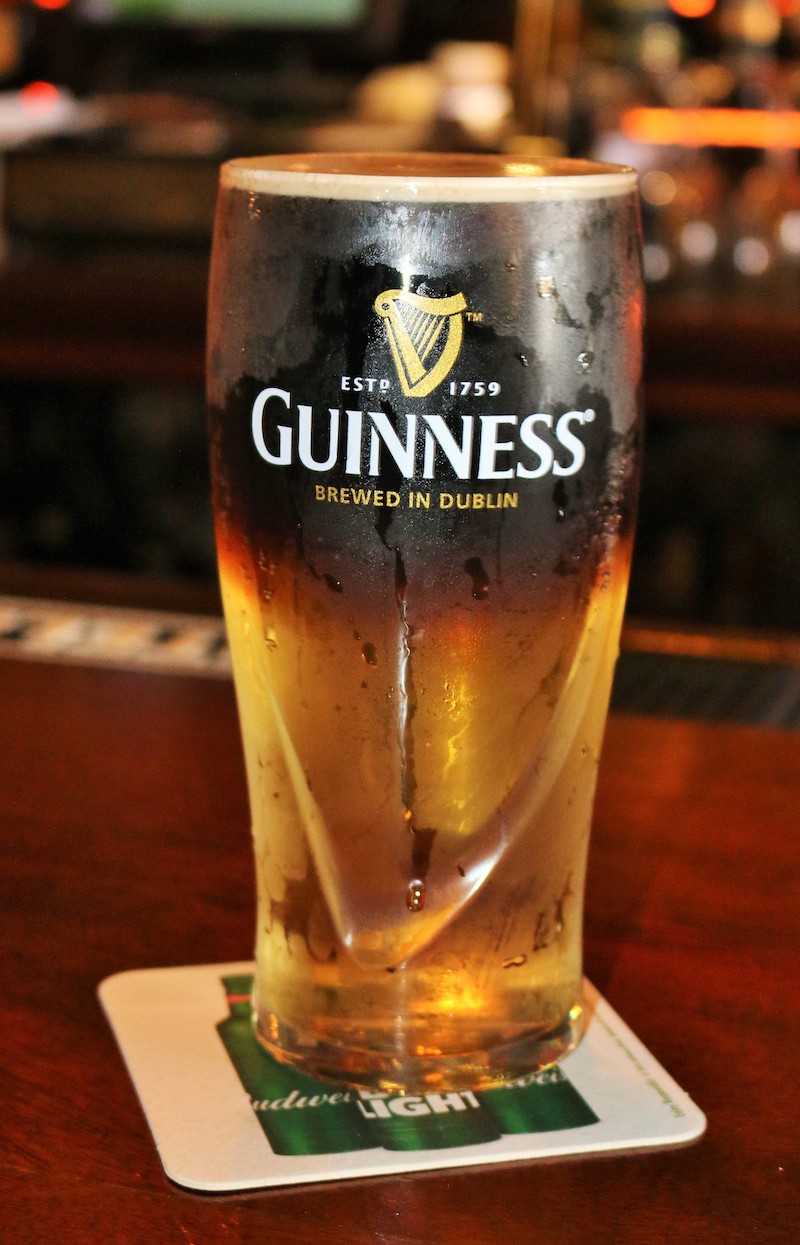 The original Black Velvet was a beer cocktail made from stout and white sparkling wine, traditionally champagne. It was crafted by the bartender of the Brook’s Club in London in 1861 to mourn the death of Prince Albert, and symbolizes the black or purple cloth armbands worn by mourners. This drink is still very popular by members of the United Kingdom.

Do you like your beer Irish-style? Let us know in the comments below!