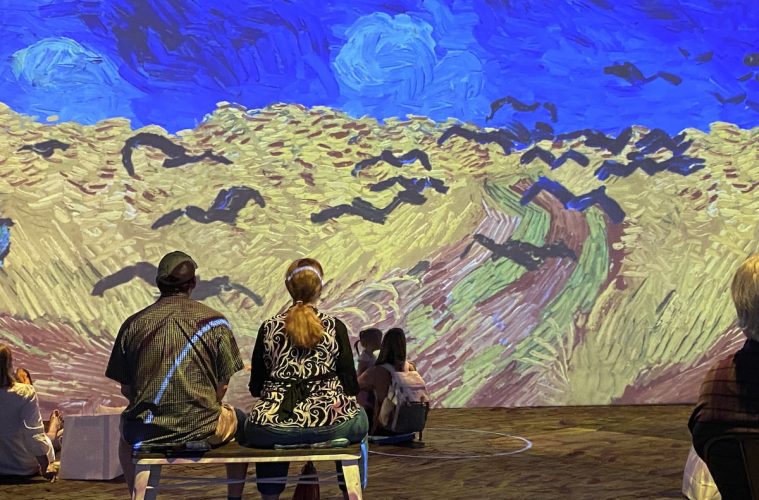 You’ve likely seen or read about the Immersive Van Gogh Exhibit sensation that’s traveling to more than a dozen U.S. cities. The nearly year-long Paris show that inspired this version drew two million visitors; other shows have sold out quickly.

We had the chance to experience this art phenomenon in Charlotte, North Carolina, and found it so enchanting that we sat through the 35-minute presentation three times to experience it from different vantage points. We’ve since raved it’s a must-see to all who will listen.

The Pitch: Imagine van Gogh’s works coming to life. You have a ringside seat at the transformation. And, those famous works might travel along warehouse-size walls.

We’ve long admired his post-impressionist creations, studying them in Musee d’Orsay in Paris and St. Petersburg’s State Hermitage Museum; most thrilling for us, however, was our afternoon in Amsterdam’s Van Gogh Museum. We’ve yet to experience The Starry Night at New York’s MoMA, but we will.

The exhibit is by Lighthouse Immersive, a partnership created about a year ago between Starvox Entertainment founded by Corey Ross and Show One Productions founded by Svetlana Dvoretsky.

A talented and tormented artist 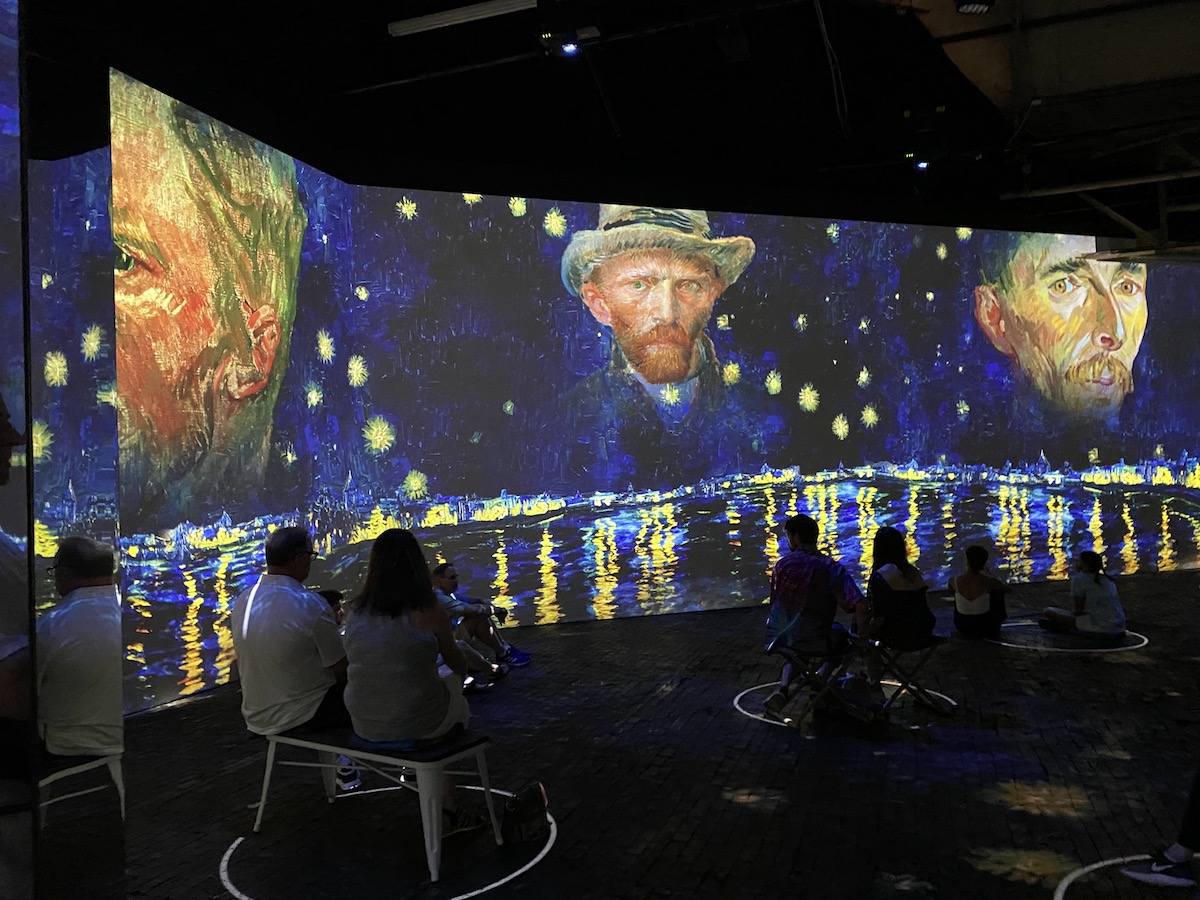 Critics and admirers have simultaneously labeled van Gogh a genius and madman. There’s no question he was talented, nor that he was tormented. He was prolific creating nearly 900 paintings from 1881 to 1890. Yet he famously cut off his ear, which some experts say followed an argument with Paul Gauguin in Arles. Some even say Gauguin did the cutting, but both artists agreed to say it was van Gogh himself. Ultimately he shot himself, dying two days later after telling his brother, “The sadness will last forever.”

“Starry, starry night
Paint your palette blue and gray
Look out on a summer’s day
With eyes that know the darkness in my soul…

And, he penned this sad lyric:

“They did not listen, they did not know how… perhaps they’ll listen now.”

A doorway into an artist’s mind 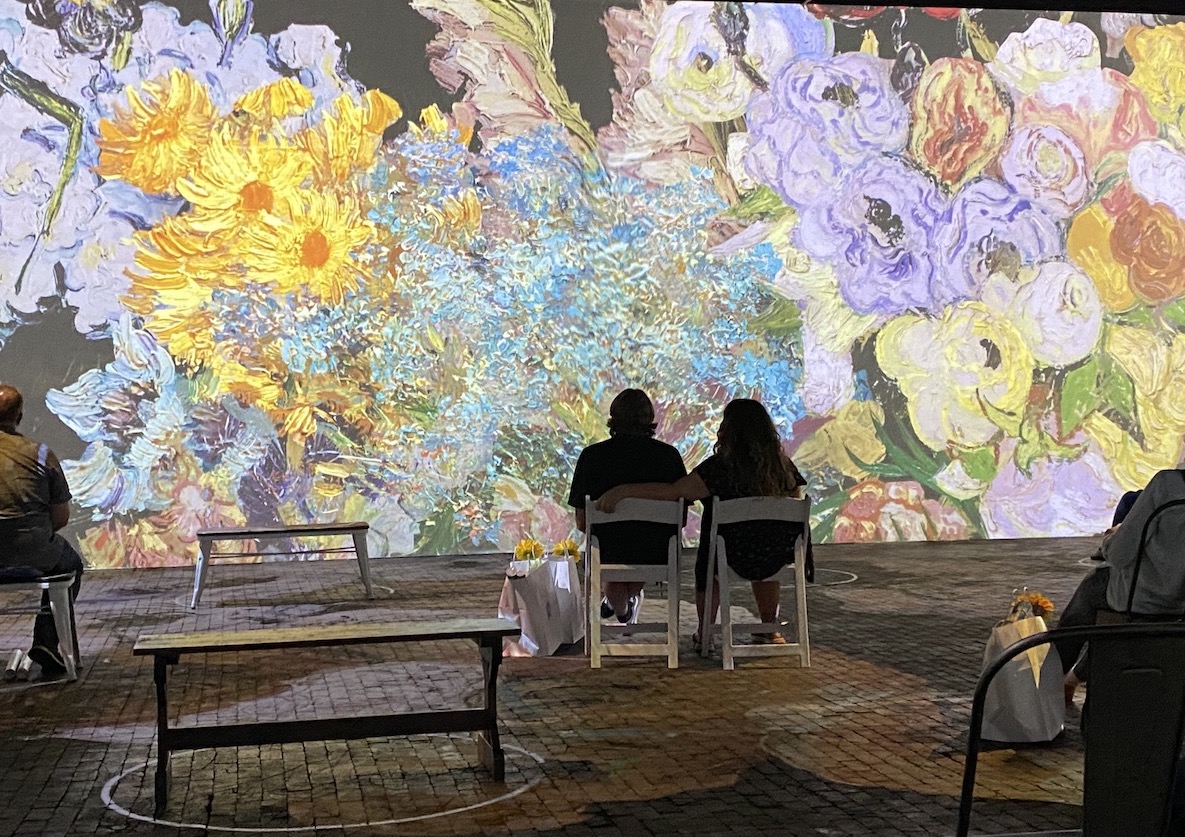 If one could only see inside van Gogh’s brain, it might be frightening or heavenly. Today’s technology may have created a doorway into that mind, allowing our senses to access his through a mesmerizing audio-video production that takes the audience into his paintings. The process relies on projecting sound and light on tall walls all around a large space. Our experience was in a warehouse. The Paris exhibit was at Atelier des Lumières, a former foundry.

These moving images evolve in shape and color making it feel like you’re not only seeing the painting but are in it, taking part in its creation. Images flow like liquid flung on a wall and morph into van Gogh’s works, fading in and out, blurring and focusing on parts of the art as well as on the whole. But there’s more. 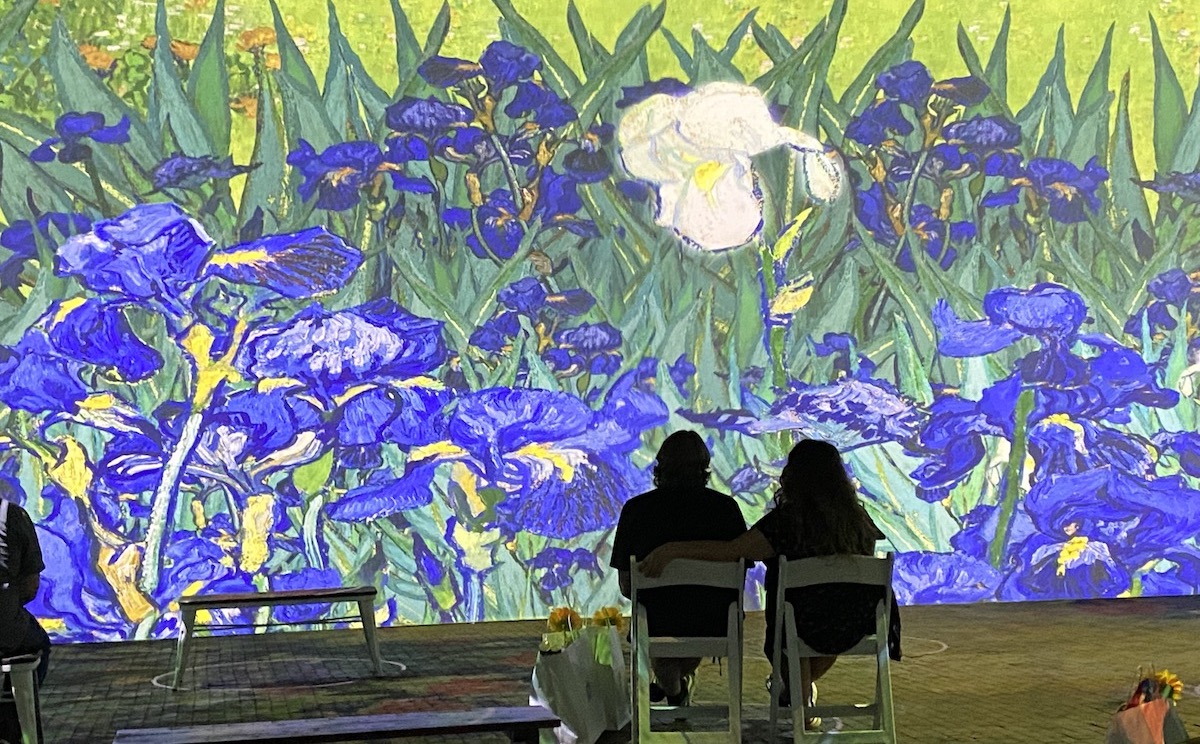 The show’s original soundtrack meshed so perfectly with the changing images that it took the presentation to another level. It was created by Italian composer Luca Longobardi who worked with Artistic Director Massimiliano Siccardi.

In a published interview, Longobardi said of the whole production: “Immersive art is a very complex concept; it is not just a technical way to represent A/V in huge spaces. The word immersive indicates a deep commitment of intentions which connect images and sounds in a way that the audience is able to experience a different perception of the art.”

As audience members, it was very easy to fall into the ever-developing images turning into new art akin to what van Gogh painted, but becoming unique and independent. We watched captivated as pieces of an image would flow from one wall to another, sometimes from grayscale to full color, just a sketch on one surface but then mutating into a full, moving canvas simultaneously on another wall — images 20 feet high.

Think of the painting “Wheatfield with Crows,” and you can imagine what you might see: crows taking flight and zooming close to you and suddenly black splotches covering the scene only to emerge as prison walls, splotched in color.

It was in a psychiatric hospital in Saint-Remy that van Gogh, with a limited view from his window, painted The Starry Night. Haunting self-portraits are included in the exhibit, and yes, walls burst forth in sunflowers that slowly turn into rain. A bare tree “catches” blossoms, and, of course, the swirl of clouds on a starry night grows before your eyes; then other portions slowly come to frame and complete the artwork. 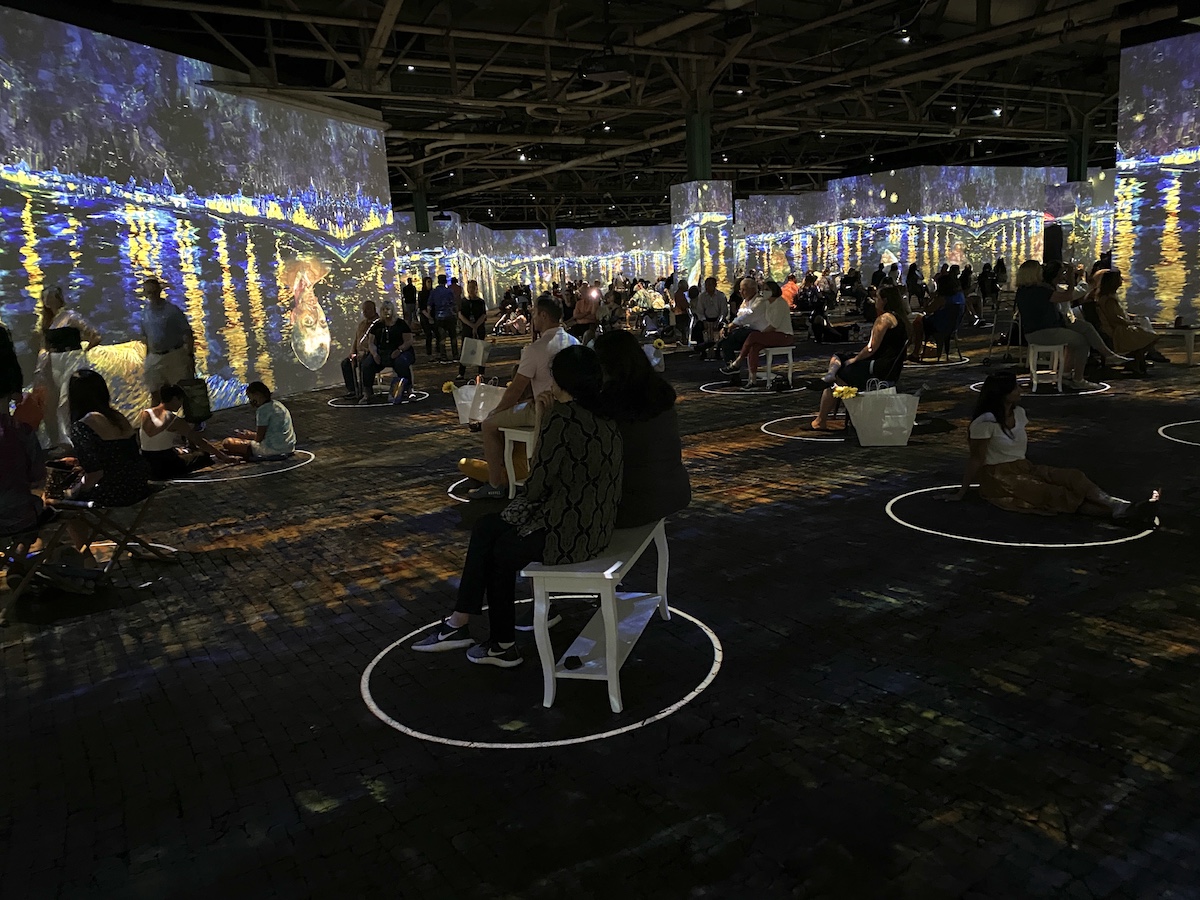 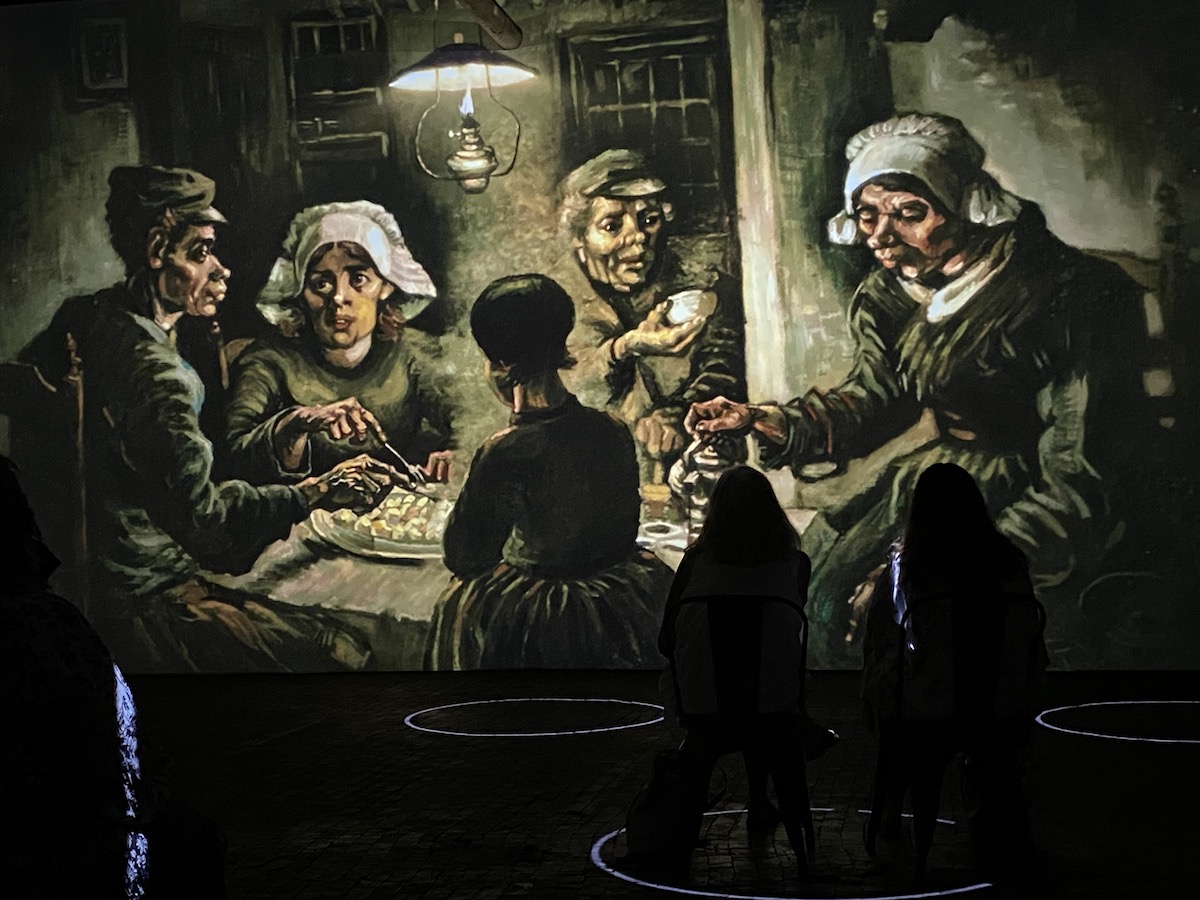 Brush, paint and canvas were van Gogh’s tools. Immersive van Gogh Charlotte requires 98 projectors, half a million cubic feet of projections, and 118,800 frames of video. The “canvas” of the show totals 76,154 square feet, about one-and-a-half football fields. “Seating” is socially spaced circles outlined in white. Some of them have two or three chairs; some have a bench; and some are empty so people can stand, sit on the floor or lay down.

The production lasts about 35 minutes and is looped. You can stay through several cycles. We suggest moving to a new circle when people exit. Go forward, backward, to the other side of the room because the angles create different perspectives.

Many of van Gogh’s most popular works are highlighted: The Starry Night, Sunflowers, Irises, Poppies, The Bedroom, Blossoming Almond Tree, The Mulberry Tree, The Night Café, and The Potato Eaters. All are recognizable in parts and in total. How they come into vision is as subtle as it is harsh.

We think van Gogh would approve.

Tickets start at $39.99 for adults, $24.99 for children 16 or younger, with untimed and flexible ticket options available. Immersive van Gogh Charlotte was scheduled to continue through September 12, 2021, at the historic Ford building at Camp North End, 1774 Statesville Ave.

COVID-19 Update: What You Need to Know 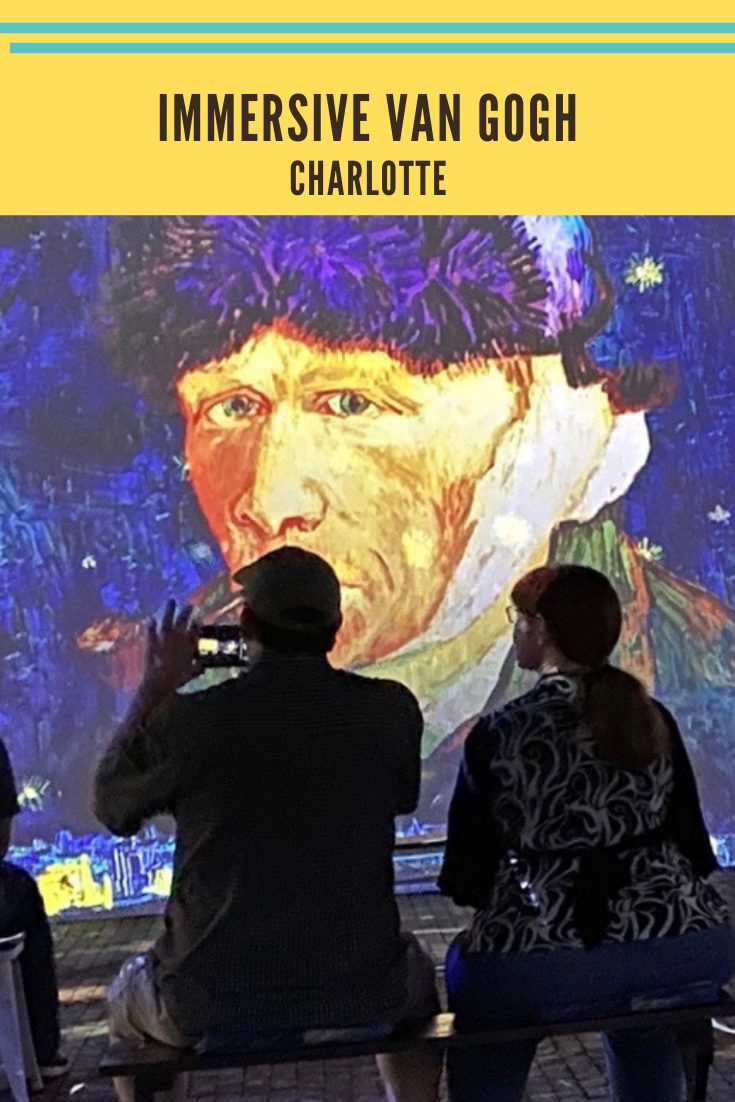