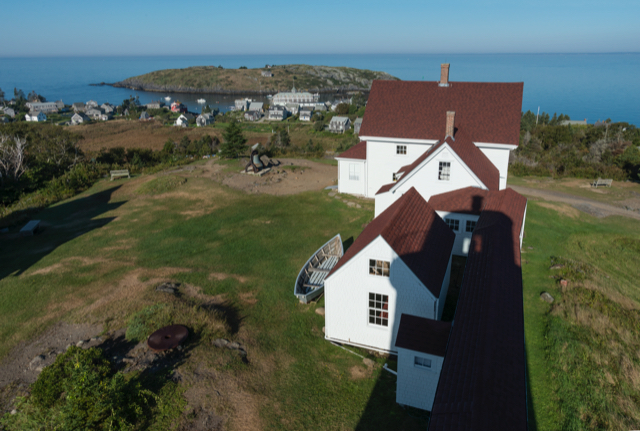 If you want to delve into the history of American art, visit Monhegan, a rugged, remote and mostly roadless island sited roughly 10 miles off mid-coast Maine. Scarcely one square mile in size and laced with about 12 miles of trails, Monhegan Island is a favorite among hikers, birders, dreamers, and especially artists.

“One of the amazing things about seeing art at the Monhegan museum is that, in almost all cases, when you see a painting in the museum, you can see the actual motif by taking a short walk.”

“If you look at the history of American art, there have been several different schools and movements over the past couple of hundred years, and most have had representation on Monhegan,” says Ed Deci, director of the Monhegan Museum of Art and History, which is celebrating its 50th anniversary season in 2018.

The museum’s collection is unusual in that everything in it relates to one, small island. “One of the amazing things about seeing art at the Monhegan museum is that, in almost all cases, when you see a painting in the museum, you can see the actual motif by taking a short walk,” Deci says. 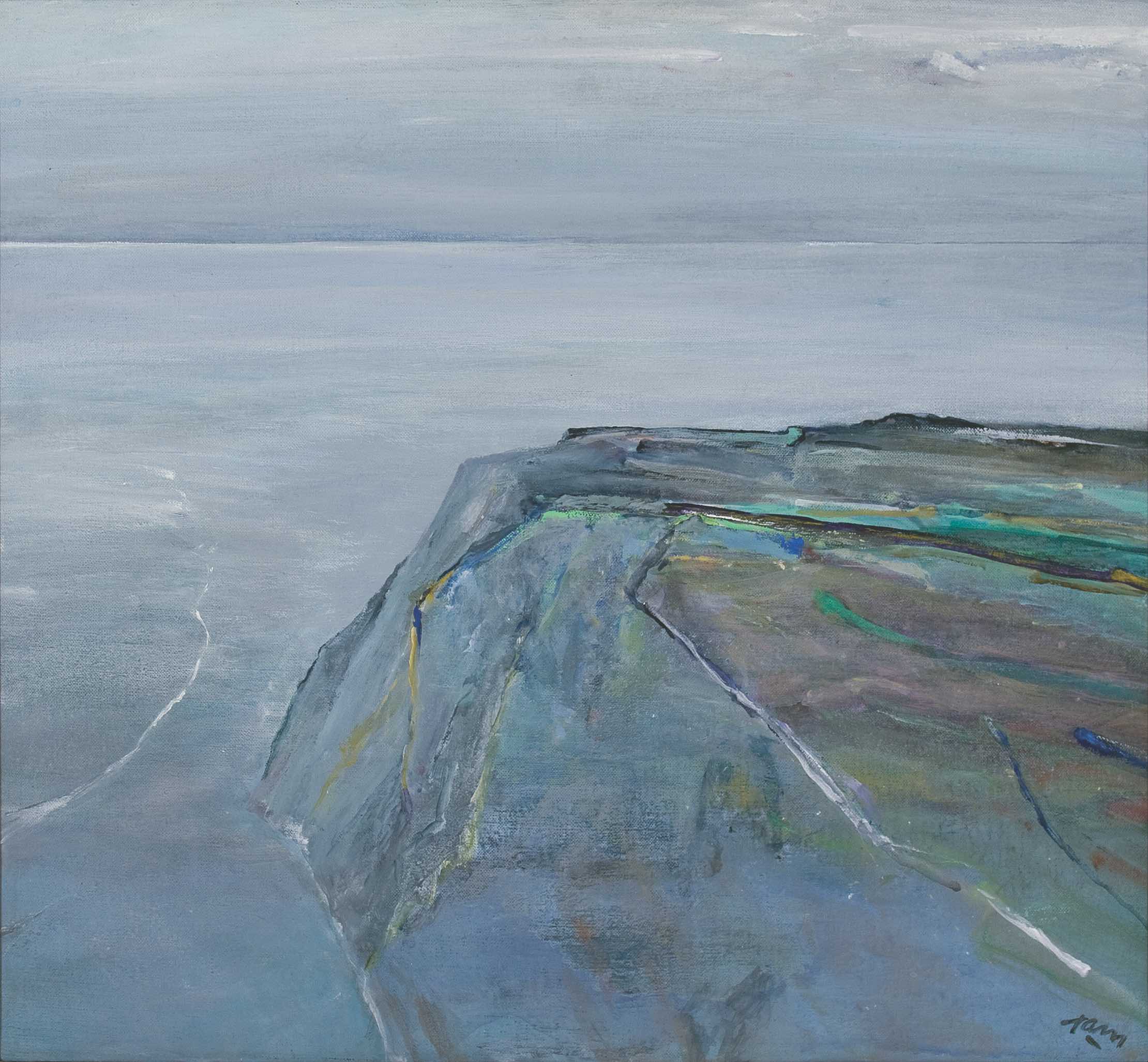 Maine’s Wabanaki called the island Monhegan, which translates roughly as “the island.” European explorers sailed into the cozy harbor sheltered by Manana Island in the early 17th century: Champlain stopped by in 1604, and John Smith sang the island’s praises in 1614. Throughout its history, Monhegan was—and still is—dependent on the sea. Fishing and tourism are the economy’s backbone. It wasn’t until 1858, when painter Aaron Draper Shattuck arrived, that artists —and the summer rusticators who followed them—discovered Monhegan.

Among those summah folk was Theodore Edison, son of inventor Thomas Edison. A frequent visitor, Edison loved the island’s wilderness and in 1938, concerned over potential development, began purchasing property as it became available. In 1954, he formed Monhegan Associates, one of the first land trusts on the East Coast. Today, nearly three-quarters of the island is under conservation easement.

In addition to protecting the island’s “wild-lands,” Monhegan Associates’ mission is also “to collect, collate, maintain, and preserve for posterity, records and archives respecting the flora, fauna, and human inhabitants and sojourners on [Monhegan], and to make the same publically available for educational, literary, scientific, and historical research study and consultation.” Within a few years, it soon became apparent that a dedicated space was necessary to hold and share the many items islanders donated to the collection.

The Monhegan Museum on Lighthouse Hill

When the Coast Guard automated the signal from Monhegan Light Station complex topping Lighthouse Hill in 1959, the keeper’s house and outbuildings were declared surplus. Edison realized these buildings would be ideal for an island museum. Island residents responded by donating photographs, documents, furniture, and equipment, Native American artifacts, memorabilia, and works by members of the island’s art colony. Of note is a gramophone. “That doesn’t sound like a particularly big deal,” Deci says, “but ours happens to have been brought to Monhegan by Thomas Edison.”

In 1968, the museum opened for its first full season in the 1874 Keeper’s House, and in 1972, the 2,500-pound signal bell for the Manana Fog Signal Station, made famous by Jamie Wyeth in his painting, “Bronze Age,” was flown by helicopter from Manana Island to its present base in front of the museum.

By the early 1990s, Deci realized the museum needed more space to house its growing collection. In 1998, it opened the replica 1857 Assistant Keeper’s House, now the site of its annual summer exhibition, and a climate-controlled vault in a replica barn to house its collection. More recently, it restored the 1850 light tower. 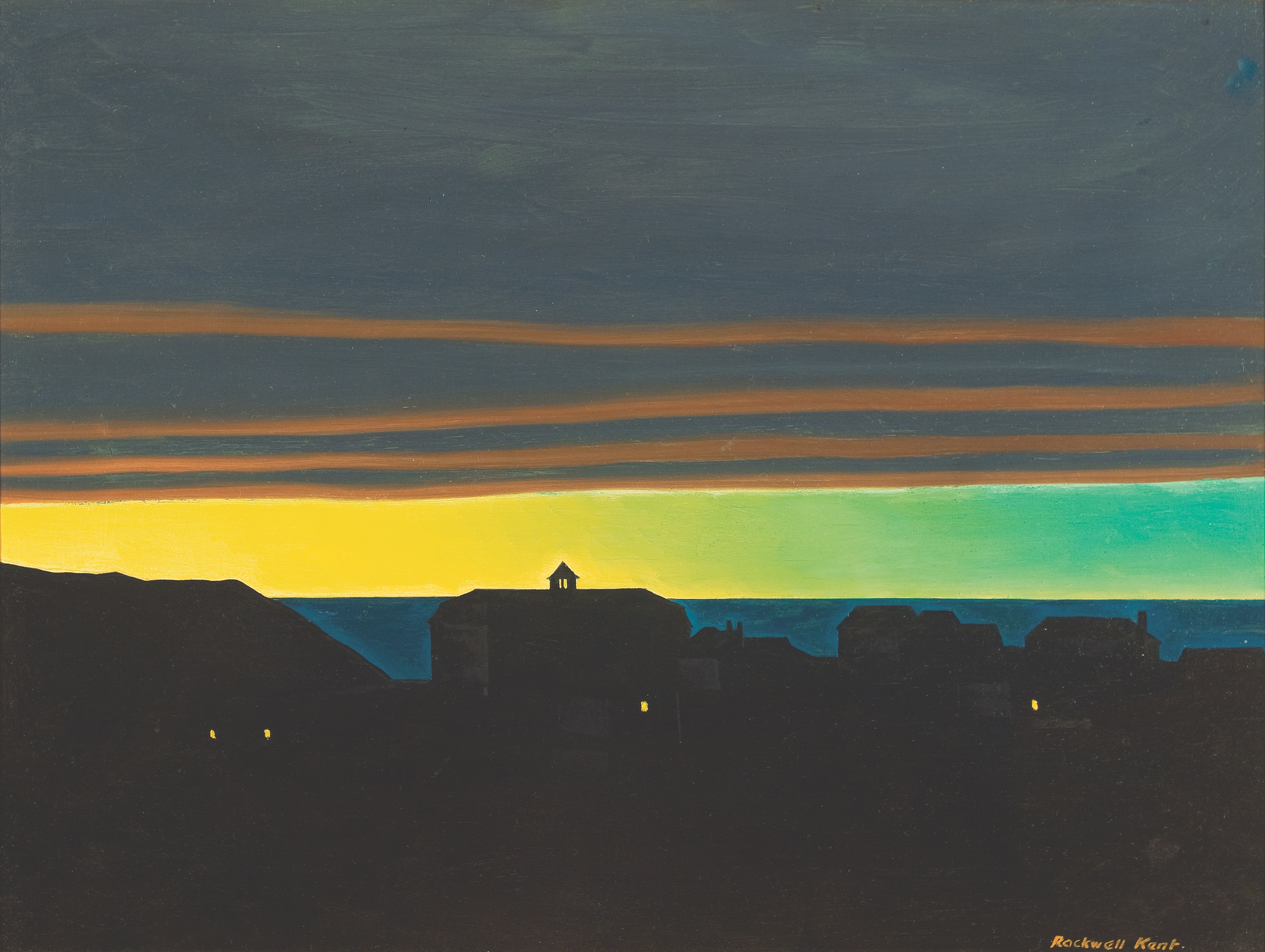 Rockwell Kent, who dropped out of architecture school and came to Monhegan Island at Robert Henri’s urging, designed and built a studio and home on Horn Hill between 1906 and1910. “Kent was unusual in wanting to live here,” says Bob Stahl, director of the James Fitzgerald Legacy and associate museum director. “He went whole hog — not just painting, but also lobstering, carpentry, cleaning latrines, blasting wells, and digging graves.” The only one of Henri’s students to stay on the island year round, he built a few houses, including the one now owned by artist Jamie Wyeth.

Between 1912 and 1946, portrait and landscape artist Alice Kent Stoddard, Kent’s first cousin, lived and worked in Kent’s studio. James Fitzgerald, who first came to the island as a student in 1924, acquired the studio in 1952 and the house in 1958. When Fitzgerald passed in 1971, heirs Anne and Edgar Hubert, Monhegan summer residents, executed his estate, which included artwork as well as the home and studio. “The house and studio have an interesting provenance,” Stahl says. “Everyone is related by blood or friendship to Kent.” 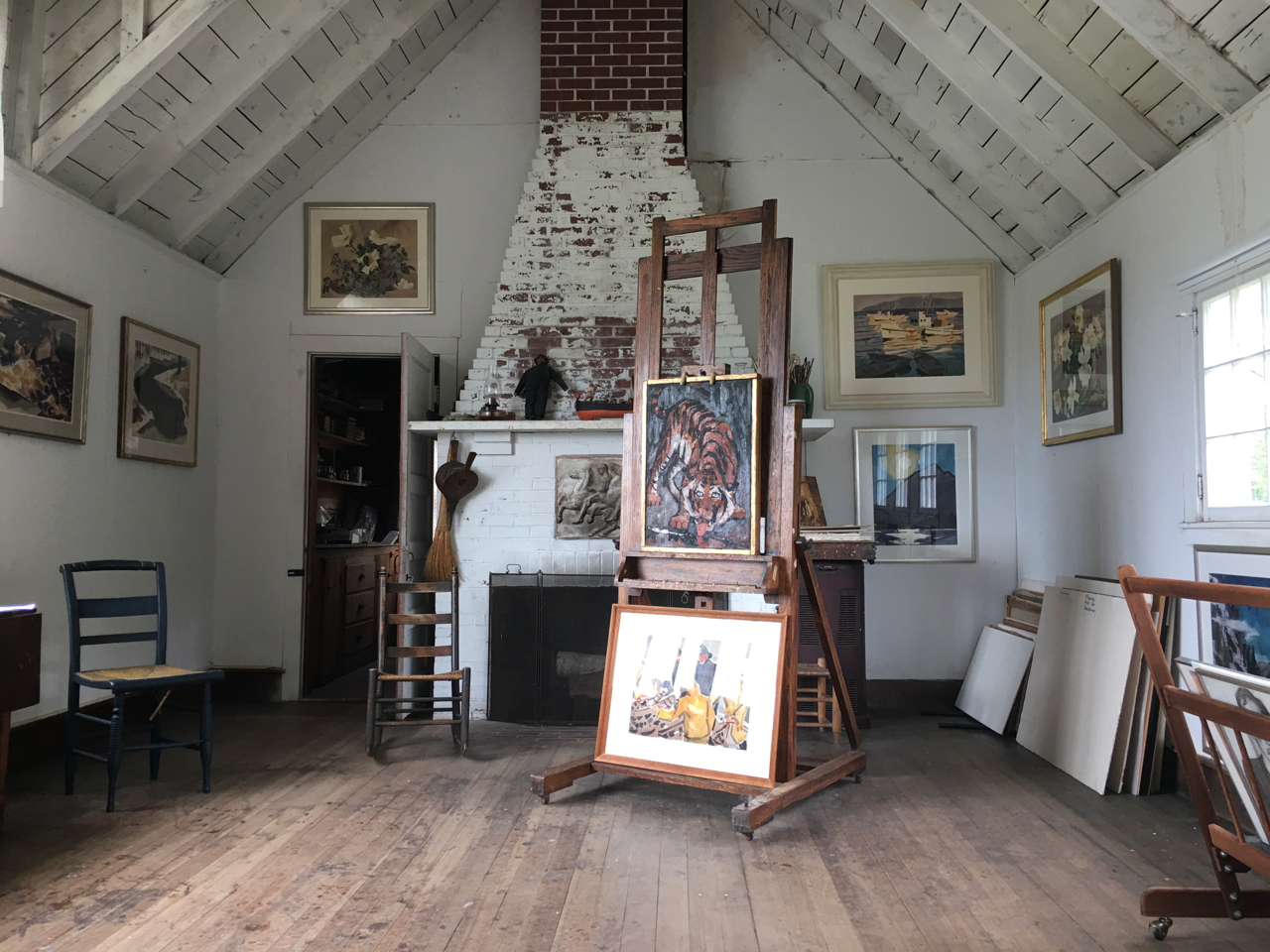 Visitors can view the Kent-Fitzgerald Studio, shown, as well as the house. Both Monhegan Island properties are listed on the National Trust for Historic Preservation Historic Artist’s Homes and Studios Program. (credit: Hilary Nangle)

In 2004, summer resident Anne Hubert bequeathed the Kent-Fitzgerald House and Studio along with Fitzgerald’s remaining estate to the museum. The Fitzgerald Legacy, created to preserve, protect, and promote his work and steward the buildings, owns more than 600 of Fitzgerald’s works. Selected watercolor and oil paintings are displayed in the studio and house, which have been restored to appear as they did when the artist lived and worked here. In 2018 the National Trust for Historic Preservation added both to its Historic Artist’s Homes and Studios Program. 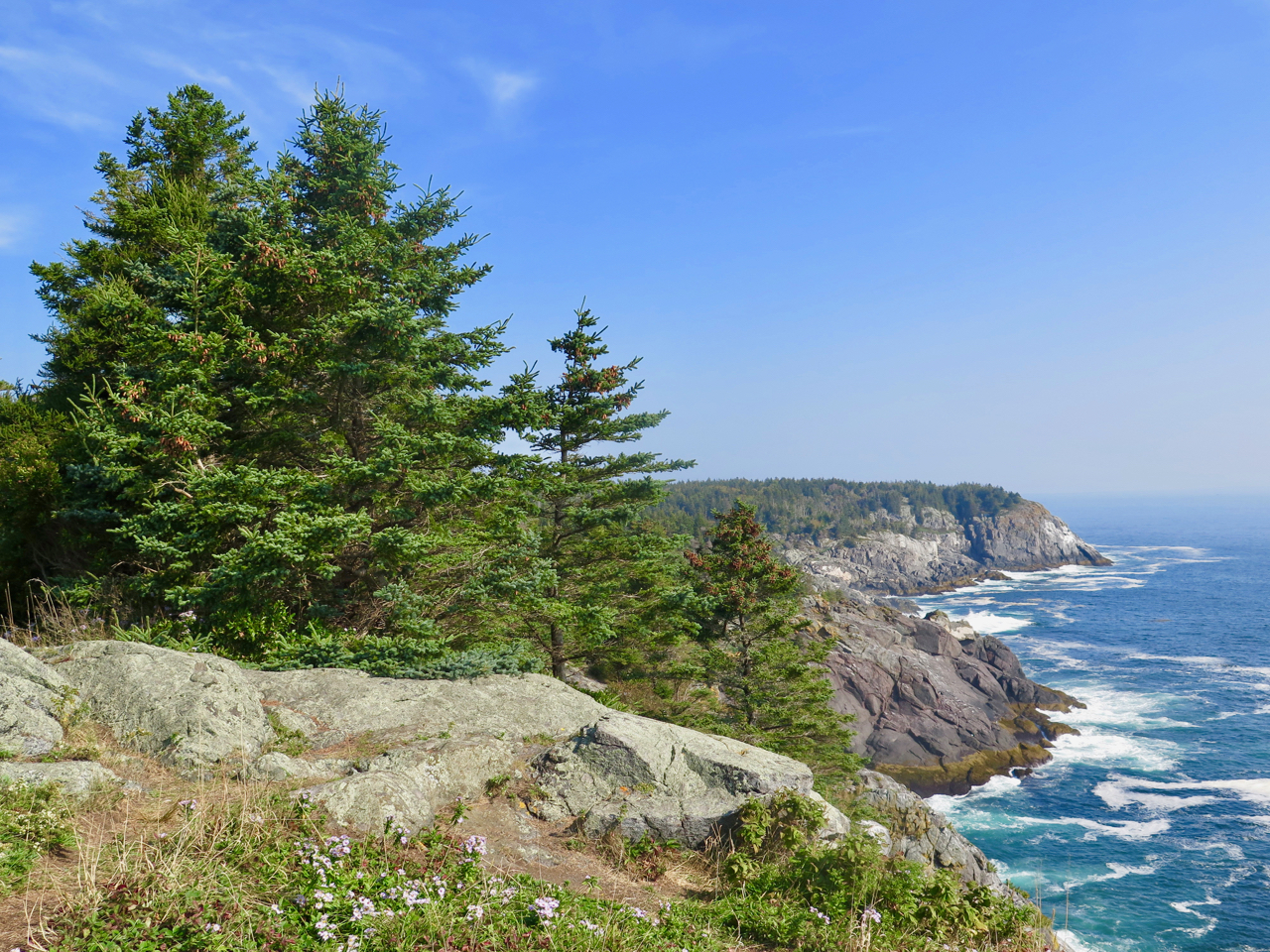 The art of Monhegan Island

One of the special attributes of the Monhegan Museum is that every single work in its collection has come as a gift. “People who love Monhegan and who believe it is important to get art created on Monhegan back to Monhegan have made gifts of art to the museum,” Deci says. “In some cases, people have bought works explicitly because they thought the works belonged in the museum’s collection.”

The works span the centuries, schools, techniques, and movements, but all have one thing in common: Monhegan

The museum’s 2018 exhibition, “An Island Treasure: Celebrating 50 years of the Monhegan Museum,” tells the island’s art and human history. “Every work in this year’s exhibition is in the permanent collection,” Deci says. “We’re sharing the best of the collection showing 80 different artists with one piece of art by each.” The works span the centuries, schools, techniques, and movements, but all have one thing in common: Monhegan. 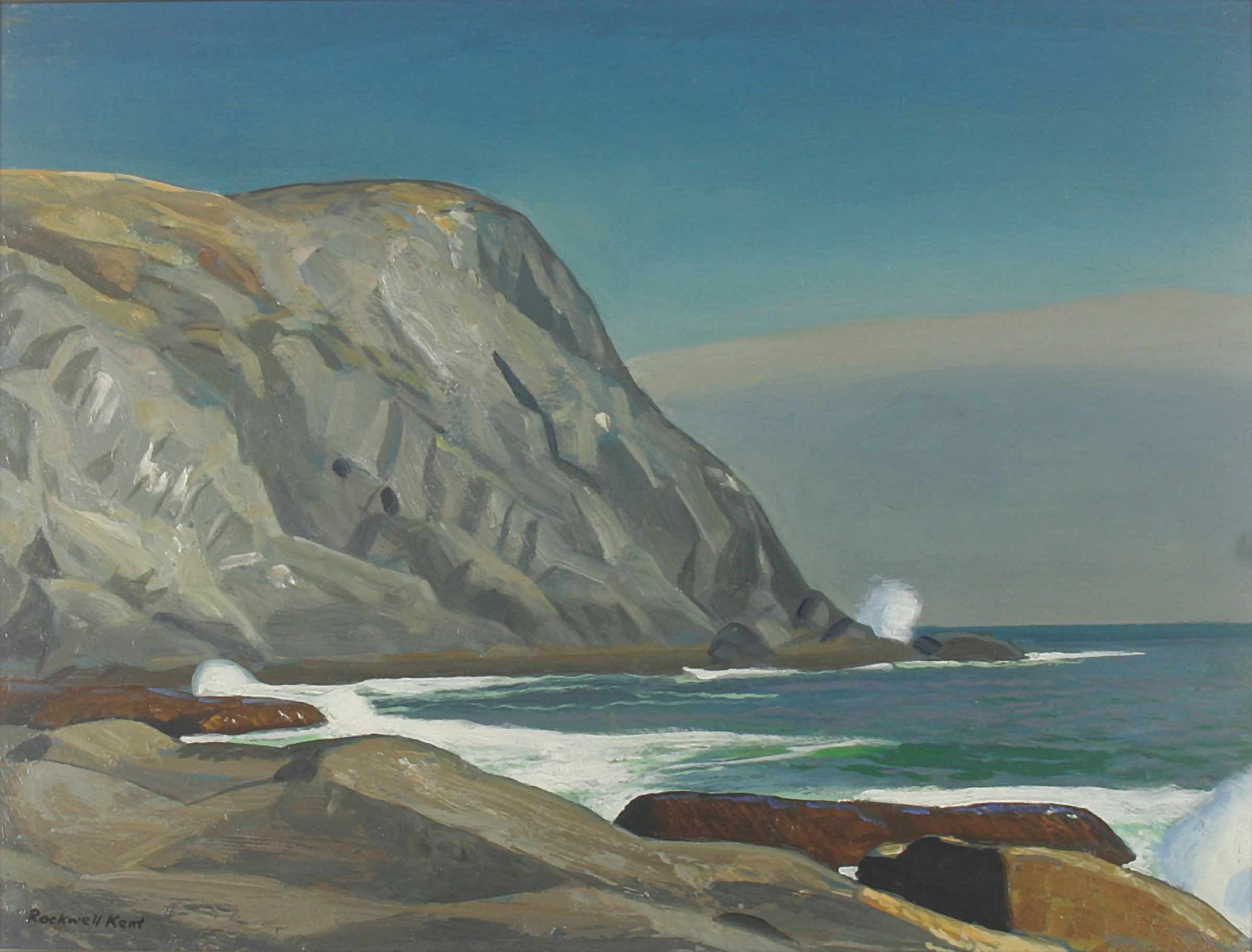 Rockwell Kent is among the many artists who have painted Monhegan’s White Head. (credit: Monhegan Museum of Art and History)

Art from the museum’s collection also accents the exhibits in the Keeper’s House. “Art is interspersed with it, usually related to what’s around it,” Deci says. On the second floor, the 50th-anniversary exhibition continues highlighting artists who painted here post World War II. It’s worth noting that the museum only shows works by deceased artists. Among those shown here are Zero Mostel, Reuben Tam, Elena Jahn, John Hulterg, Lynne Drexler, and Frances Kornbluth.

The gifts keep coming. Recently, the museum received works painted between the late 1940s into the 1980s by Geraldine Tam, wife of artist Reuben Tam. “She painted exquisite watercolor paintings of island wildflowers and we just got the whole collection,” Deci says.

“Jamie and Phyllis Wyeth have the largest collection of Monhegan paintings by Kent of any person or institute in the country,” Deci says. “Jamie loves Kent’s work; when he had his first show in New York, he used the money he made to buy a Kent.” He’s indicated that he intends to donate the collection to the museum. 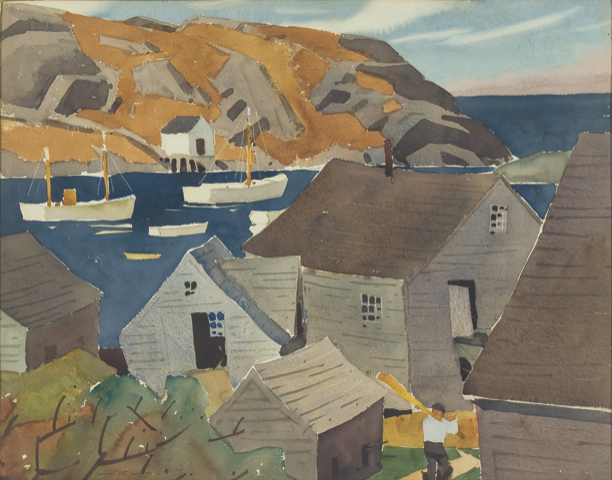 In many ways, Monhegan Island looks the same now as when James Fitzgerald painted September Monhegan in 1953. (credit: Monhegan Museum of Art and History)

Step into a Monhegan Island painting

Once you’ve viewed the artworks, close the circle by seeing their inspiration. Leith MacDonald offers art tours of Monhegan, taking visitors to some of the island’s iconic landscapes, such as White Head, Maine’s highest cliff; Burnt Head; Gull Rock; and Cathedral Woods, famed for its fairy houses. He also visits village sites, pointing out artist residences and The Trailing Yew, a rustic guesthouse that’s sheltered many artists over the years. Along the way, he shares history and lore.

Monhegan’s artists have created a visual history of the island, documenting what it looked like and who was here from the late 18th century to now. “Alice Kent Stoddard painted a lot of portraits—the lightkeeper, fishermen, children. They’re a record of who was here in the 1930s,” MacDonald says, sharing photos from a book. He points to other photos of other paintings to show that today’s forested lands were once barren.

On the headlands, he gestures to the seascape, which seems familiar because so many artists have painted here. “The rocks haven’t changed; thank Edison for that,” he says, pointing out the nooks and crannies where artists set up their easels.

Much has changed on Monhegan Island and yet, so much remains the same, including the easel-toting artists who still come each summer to capture the island’s light, landscapes, and seascapes. 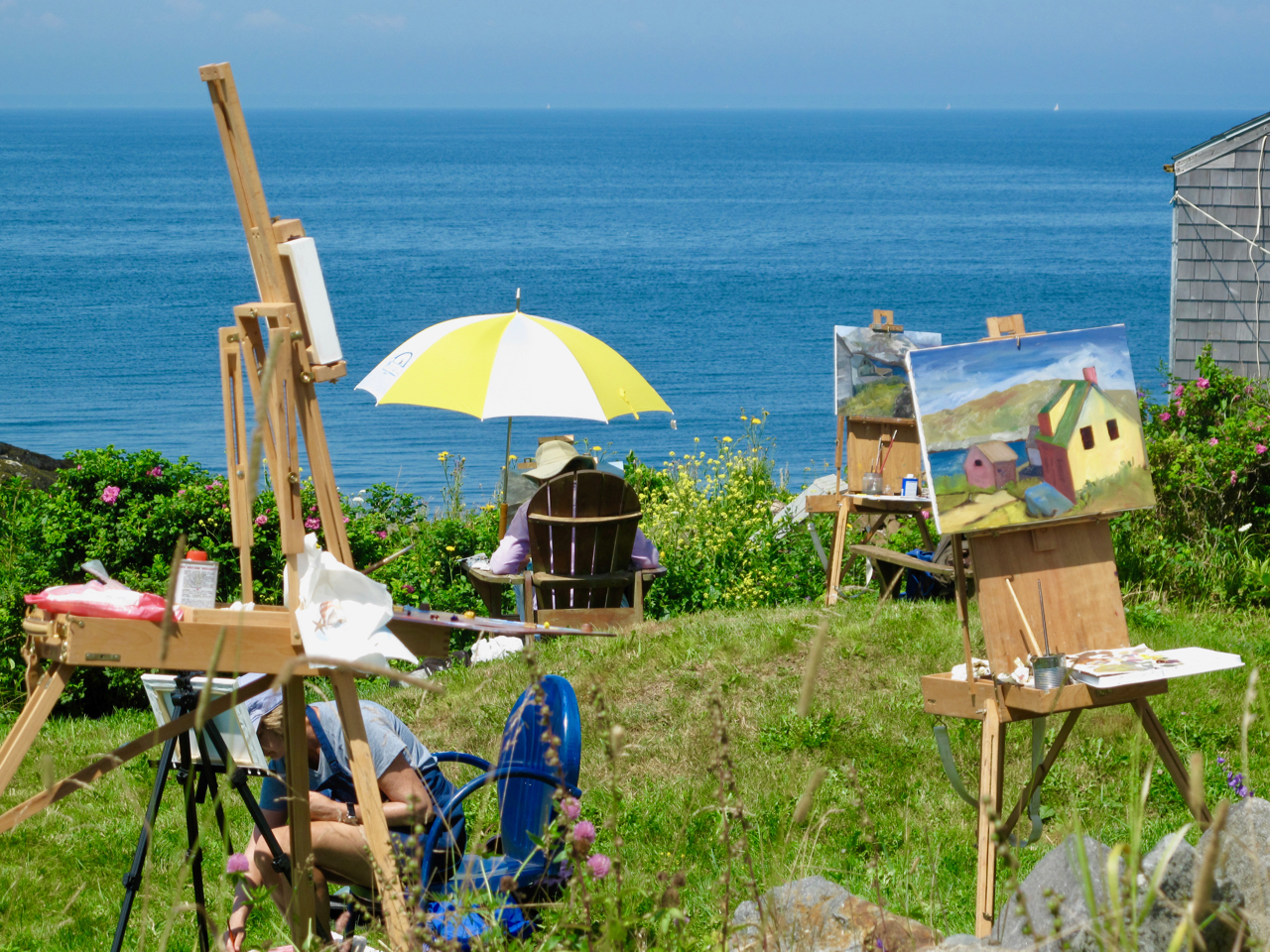 Visitors can tour the Kent-Fitzgerald House and Studio 12-2pm Saturday and 1-3pm Tuesday, from late June to late September.