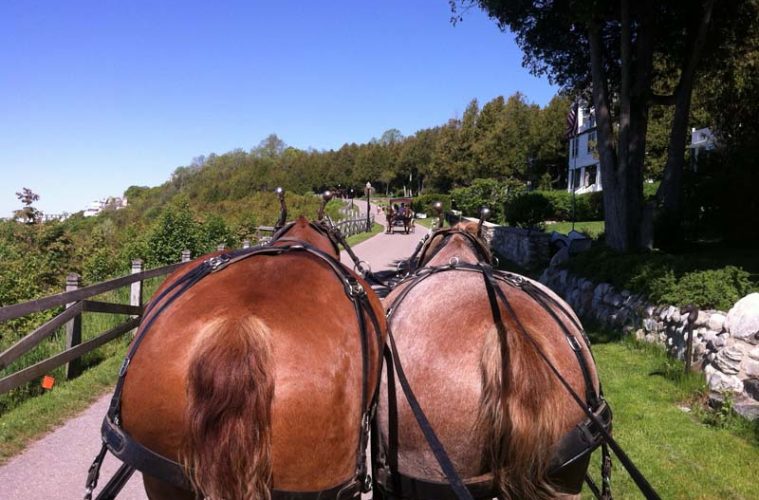 I live in an 1890 Folk Victorian home with lots of historic charm and challenges. (Have you ever tried hanging a painting on plaster and lathe?) But it’s the two hitching posts out front that speak to me. I’ve often wondered what it must have been like to hear horses clip-clopping by and to welcome visitors securing their carriage out front. And so I jumped at the chance to attend a conference where cars are banned and the horses on Mackinac Island rule.

With its historic Grand Hotel, horse carriages, protected forests and hugely popular fudge shops, Mackinac Island seemed the closest I could get to the horse-centric days of centuries past.

Just a speck of a 3.8-square-mile island in Lake Huron between Michigan’s lower and upper peninsulas, Mackinac Island is easily reached by ferry from either Mackinaw City or St. Ignace. Ferry companies have it down to a science, with staff directing arriving cars to parking spaces and checking in luggage for direct transport to Mackinac hotels.

The ferry to Mackinac takes less than 20 minutes, but that short ride transports you to a different world altogether, free of the traffic and noise that plague today’s existence.

Although the small historic village where the ferry docks has the usual restaurants, bars and souvenir shops, it’s the four-legged beauties that immediately grabbed my attention, with horse-drawn taxis and carriages lined up on the main street ready to take arrivals to their hotel or on guided tours of the island’s highlights.

Turns out, the horses here are king, with 600 of them setting the pace for a slower way of life and with more horse-drawn carriages than anywhere else in the country.

Absolutely nothing would work without them, because not only do the horses on Mackinac Island transport people but also everything else imaginable, including furniture, supplies, food and even the island’s trash. On my wanderings past hotels and Victorian homes, I noticed quite a few with horses and stables of their own. It all harked back to the days before planes, trains and automobiles, when horsepower meant exactly that.

Spread along a gently sloping bluff, the aptly named Grand Hotel is reason enough to come to Mackinac Island. Although there are plenty of other places to stay, including other hotels, historic homes and bed and breakfasts, this is the island’s grand dame. 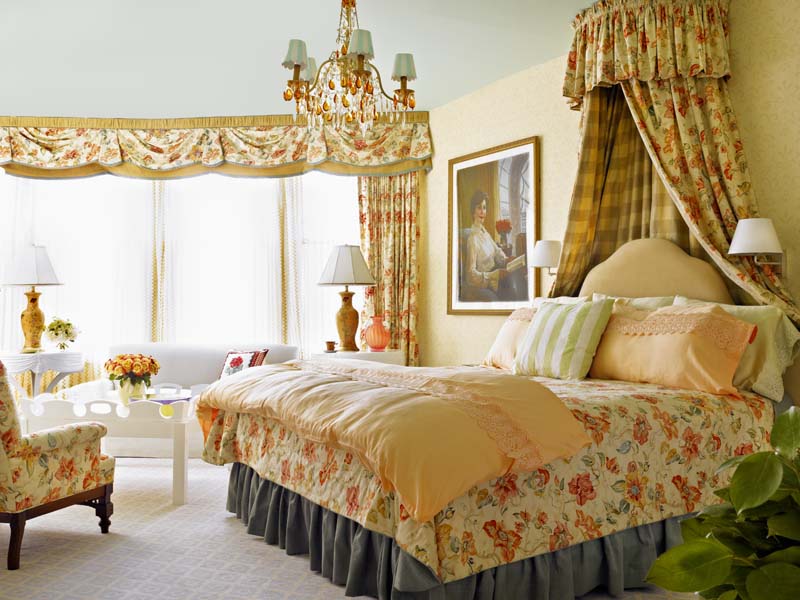 Built in 1887 as one of 1,200 railroad hotels across the country designed to lure travelers on to trains, it’s now one of only 11 large hotels remaining. Its 660-foot front porch, the world’s longest, is legendary, with 100 rockers beckoning guests to rest awhile and enjoy sweeping views. 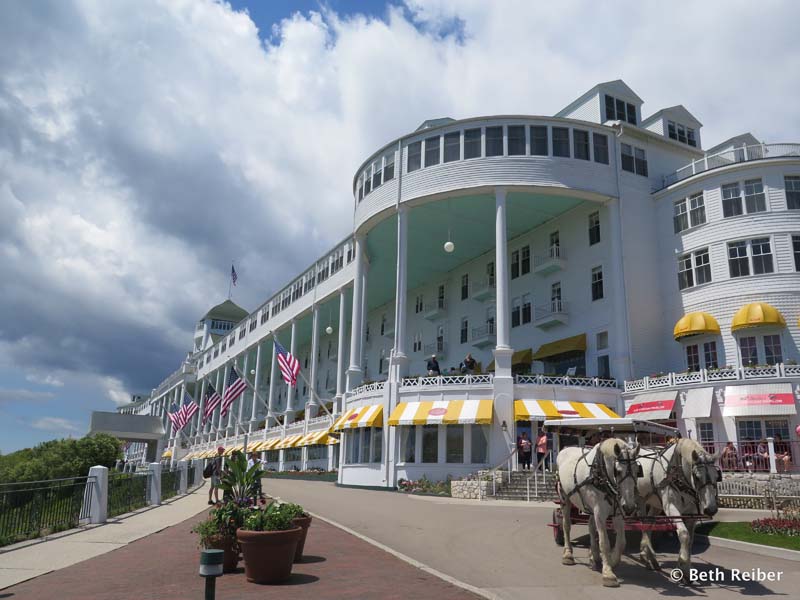 The Grand Hotel has the longest porch in the world

Inside, the hotel displays Gilded Age lavishness, with each of the 393 rooms uniquely decorated with colorful wallpaper, heavy drapes and decorative furniture.

But it was the genteel atmosphere of the parlor – where afternoon tea is accompanied by live music – and the formality of the dining room serving its signature five-course dinner that made me feel like I was in a movie set. 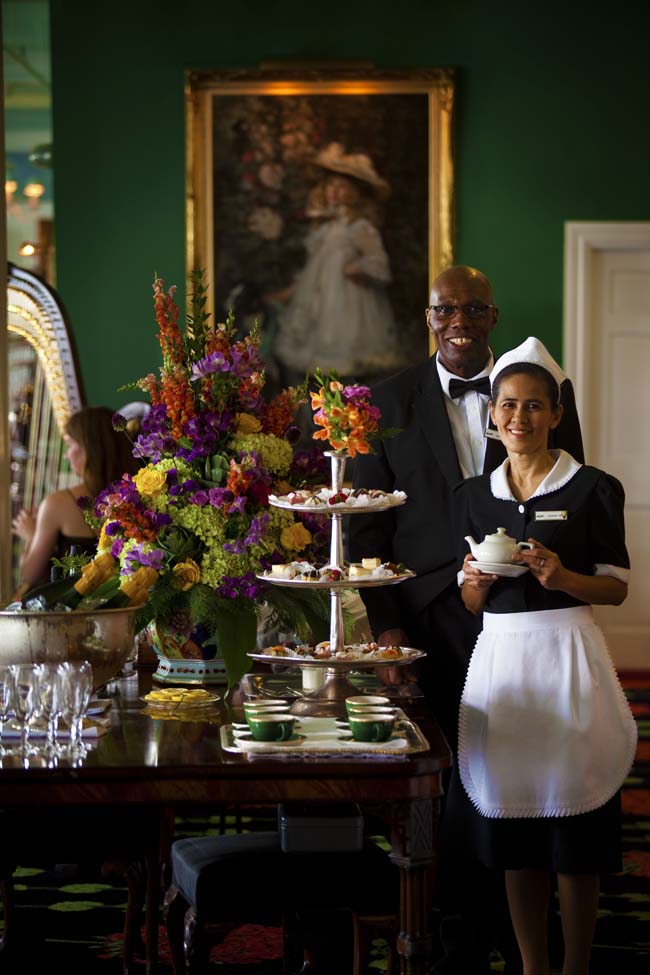 Indeed, both “This Time for Keeps” starring Jimmy Durante and Esther Williams and “Somewhere in Time” with Christopher Reeve and Jane Seymour were filmed in the Grand. 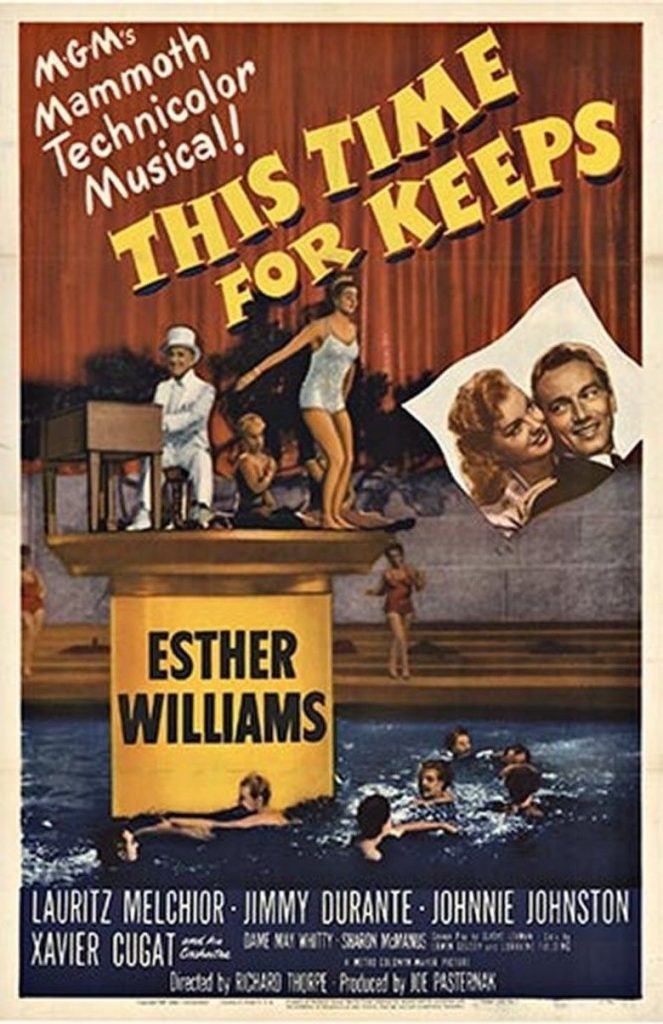 Poster for the movie, “This Time for Keeps”

Dinner is formal, with coats and ties required for men and dressy attire for women. Even children are expected to dress up; seeing little men and women in their Sunday best made me think that staying here is a great education in social manners.

What to do on Mackinac Island

The Grand Hotel offers a wide range of recreational diversions, including lawn games like croquet and bocce ball, pickleball on a clay court, tennis, a heated pool, rental bicycles, horse riding and carriage rides, and golf on its 18-hole course, where guests are transported from the front nine to the back nine via horse-drawn carriage. 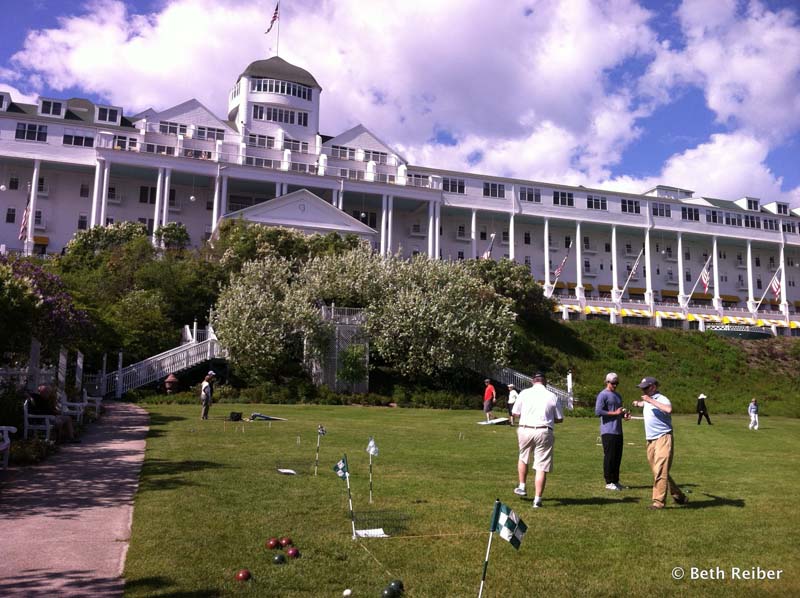 Lawn games are a big hit at the Grand Hotel

There’s plenty beckoning beyond the Grand, too.

Because I’m fascinated by how people live and used to live no matter where I travel, I spent the good part of an afternoon at Fort Mackinac. Located on a hill above the village, it was founded in 1780 by the British during the American Revolution, taken over by Americans in 1796, recaptured by the British in the War of 1812 and then returned to U.S. soldiers, who remained until 1895.

In addition to live demonstrations of cannons and rifles being fired and tours by costumed interpreters, the fort’s 14 restored buildings vividly portray what life was like for the soldiers, officers and families who lived there and the island’s history as a fur trading post and commercial fishing town. 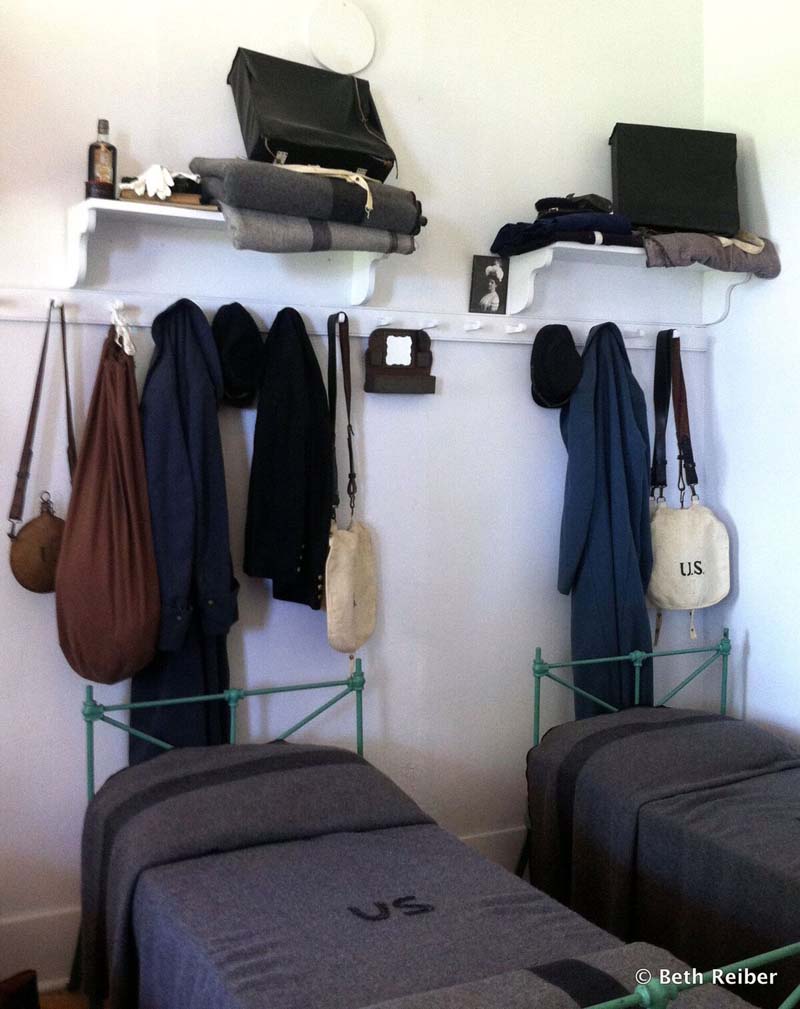 Below the fort is the waterfront village with its historic buildings (several open to the public as museums) and unique specialty shops selling jewelry, clothing and the handmade fudge that’s been the island’s signature souvenir for more than 130 years.

Mackinac also has art galleries, two carriage museums (why isn’t that a surprise?) and the Richard and Jane Manoogian Mackinac Art Museum with Native American art, historic maps, photography and other works related to the island and its history. There’s also a butterfly house and a butterfly conservatory, a haunted history tour and a haunted house, and you can parasail, kayak, paddleboard, saddle up a horse or rent your own horse-drawn buggy.

After dinner, the two-hour Sip n’ Sail Cruise offers live music, a full bar and views of the setting sun over the lake.

For me, the unexpected crown jewel of the island was its natural beauty.

Chosen as the country’s second national park before becoming Michigan’s first state park in 1895, Mackinac Island State Park protects more than 80% of the island. It’s laced with more than 70 miles of trails that lead past natural wonders like Arch Rock and historic sites like cemeteries. 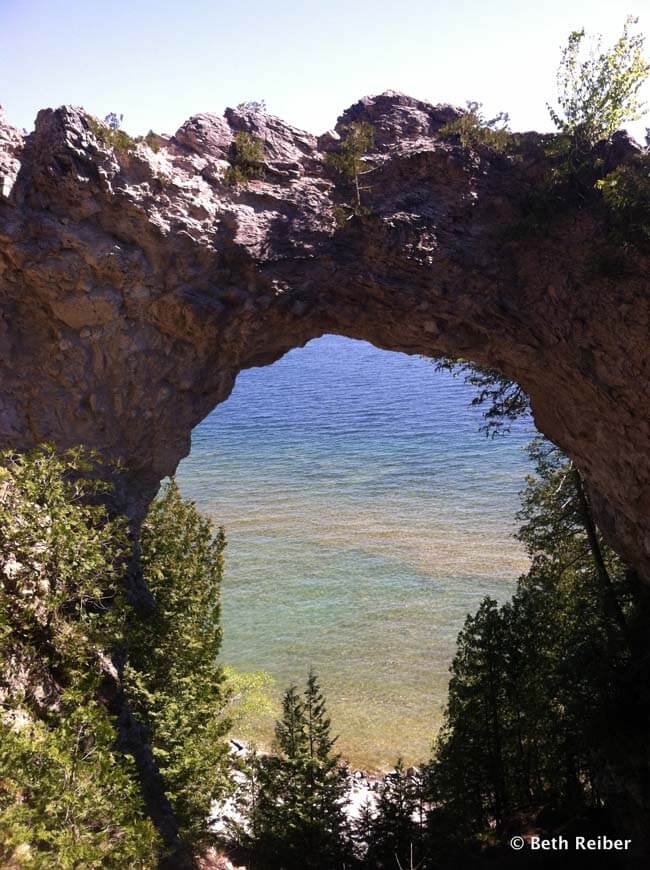 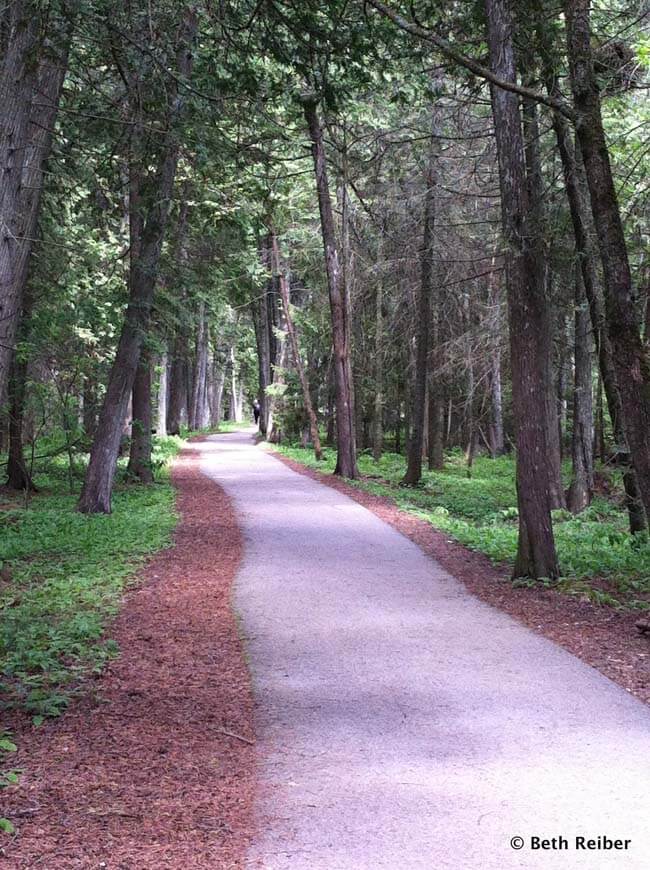 The highlight of my trip was a bike ride along the 8-mile perimeter of the island, where I was greeted by lapping waves, the cries of gulls and long stretches of undeveloped coastline. 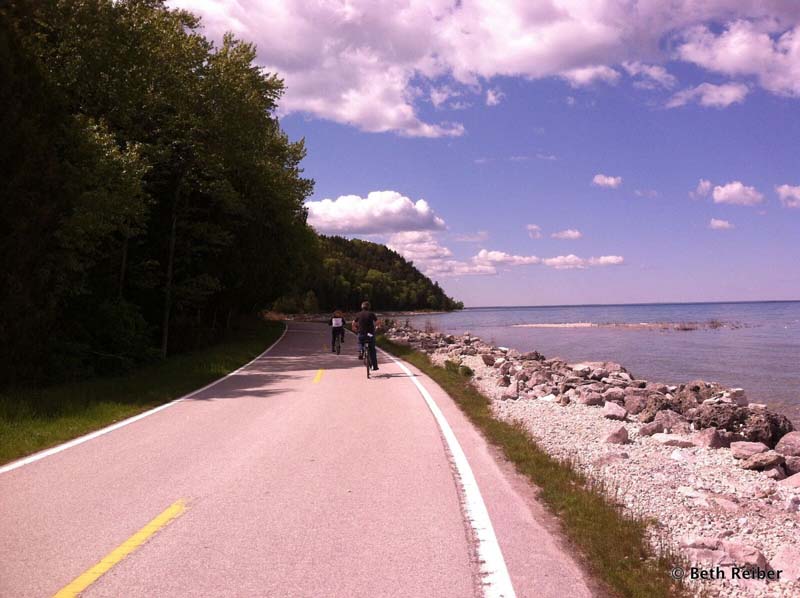 There’s something magical about being in a world without automobiles right in our own country, even if only for a few days.

*All photo credits: Beth Reiber (except where noted)

The author’s stay was subsidized by the Grand Hotel and the state of Michigan (as part of a travel writer’s conference.)