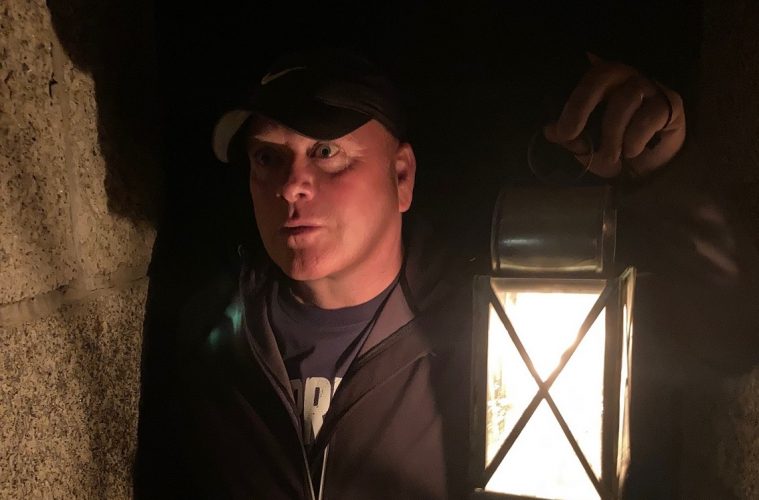 But Atlantic Canada’s largest city is also the provincial capital, an international port, and a cultural hub with stories to tell. Visit these Halifax museums and sights, and you’ll discover there’s more to this inviting city than meets the eye.

Raise the spirits at the Halifax Citadel National Historic Site

On a dark and misty night, I  journey into the haunted history of the Halifax Citadel. With a flickering lantern in hand, I shuffle warily along the historic fortress’s dimly lit passageways into shadowy inner chambers. And then, descend flagstone steps and navigate dark tunnels to the subterranean, airless cells that once housed hapless prisoners. I’m following our black-cloaked and mysterious guide Mr. Adams, who recounts chilling ghost stories and tales of the unexplained.

“I’ll take you as close as I possibly can to the location where unexplained events took place at the Citadel,” our spooky chaperon whispers hoarsely.” And I can promise you that everything you are going to hear is absolutely true.”

For whatever reason, I had thought this “Raise the Spirits” tour would be a great way to spend an evening in Halifax. Trundling around in the shadows of the ramparts at this National Historic Site, breathlessly anticipating whatever sinister apparition might lurk around each corner, would be fun. The tour had begun rather well. The initial spirits being raised were both uplifting and calming. 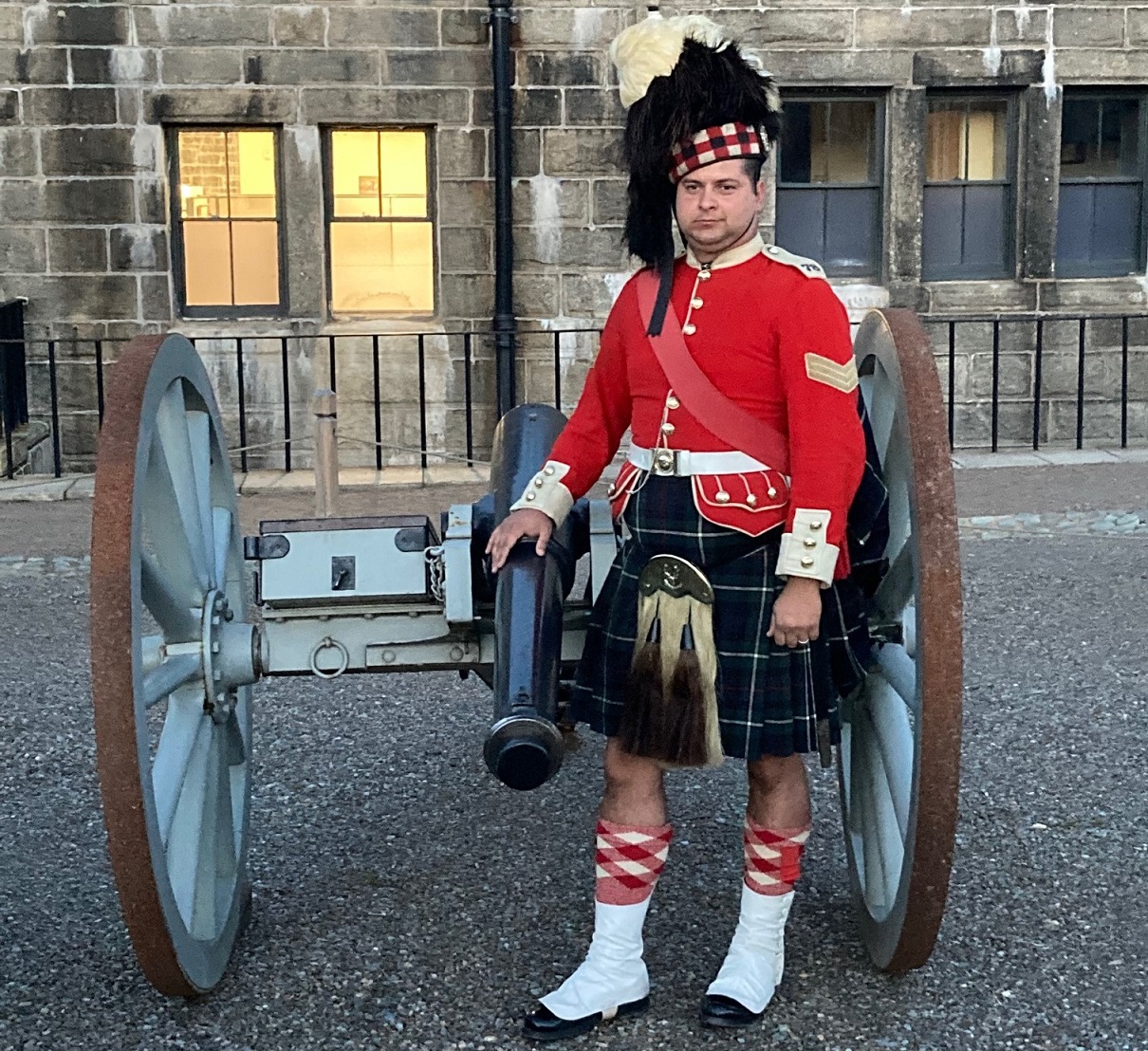 After hiking up Citadel Hill to the star-shaped fortress sitting strategically atop, it becomes abundantly clear why this commanding location was chosen in 1749 for the Halifax Citadel to protect the city.

Sergeant Andrew Crawley meets me at the fortress gates. Playing the part of a 78th Highlander from 1869-71, Crawley is handsomely dressed in his red doublet and kilt. He says the regiment was popular with Haligonians because they brought colour and pageantry to the city. He certainly will bring colour to my night!

Our small Distilled Experiences group is led inside the soldier’s library, and the spirits that greet us here are quite welcoming. Four special Glencairn nosing glasses stand in a line on a paper placemat filled with tasting notes. Each is placed on the name of the spirit it contains: Noon Gun Gin, Fort George Genever, Daily Ration Rum, and Granite & Grain Whisky. 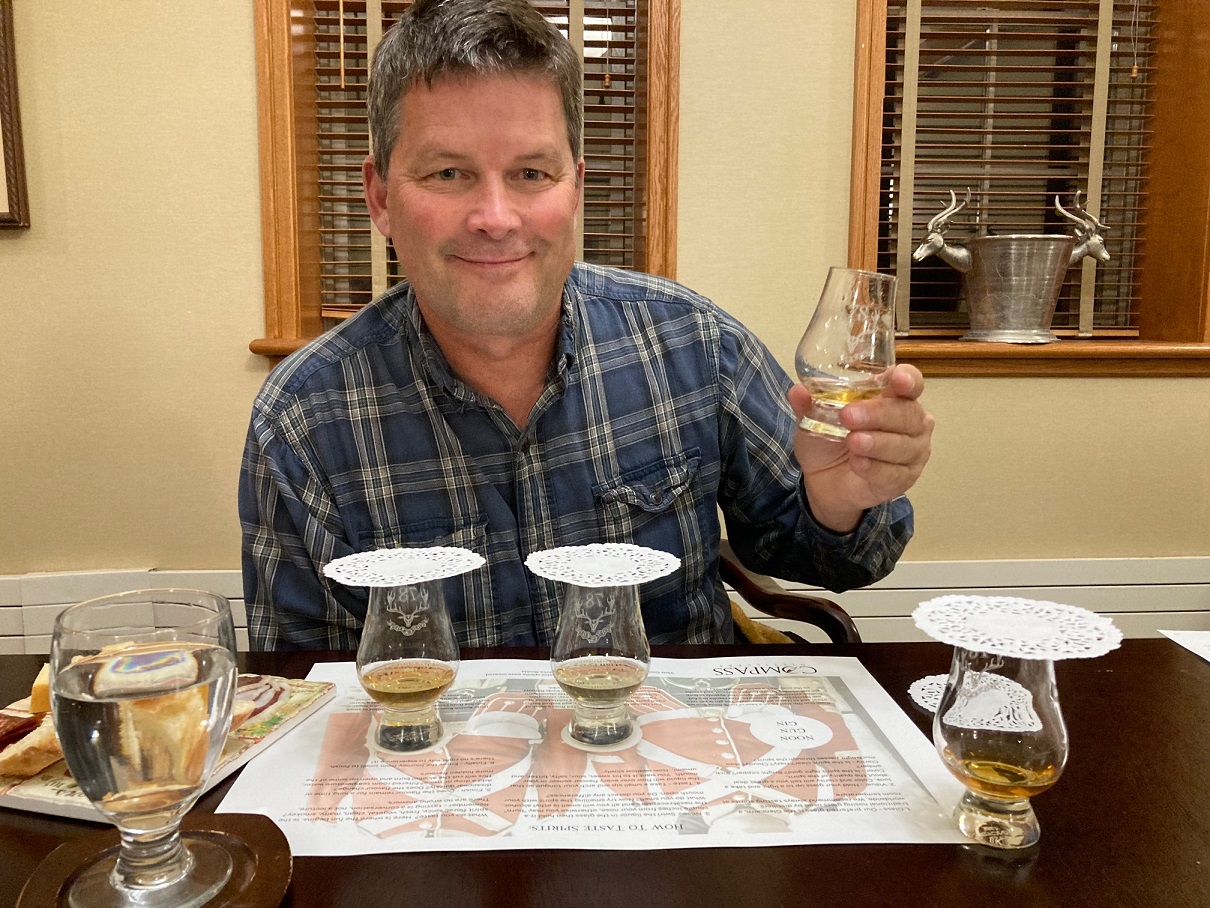 Writer James Ross enjoying some spirits before the spirits.

The everyday life of a nineteenth-century soldier included alcohol. And, alcohol played a significant role in the Citadel’s story. It helped persuade new recruits to enlist (I felt like signing up then and there). And it fortified one’s bravery in the field (it turns out I would need that shortly). Indeed, we learn that in 1869, a daily alcohol ration was the high point for many soldiers. And with that in mind, the Halifax Citadel Society partnered with Compass Distillers to create these unique spirits. All are aged in oak barrels and stored on-site in the Citadel’s North Magazine.

“Adjacent to this building is a room filled with American oak barrels,” Crawley says. “They’re all aged for various lengths of time, based on the type of spirit.”

Unfortunately, Mr. Adams doesn’t lead us to where the good spirits are stored, but rather into the Cavalier Building, which housed the barracks back in the 1800s. By the time we leave the tasting for this second part of our spirited experience, our own bravery has been fortified, if only temporarily.

Although the spirits have heightened our confidence level, they may have also allowed for more furtive flights of the imagination. The spirits are more real because of the spirits! Still, the after-hours tour of the fascinating fort is worth the unease. And, as I exit the Citadel with a huge sigh of relief, the view down to the city lights of Halifax is terrific.

Trace your roots at Pier 21 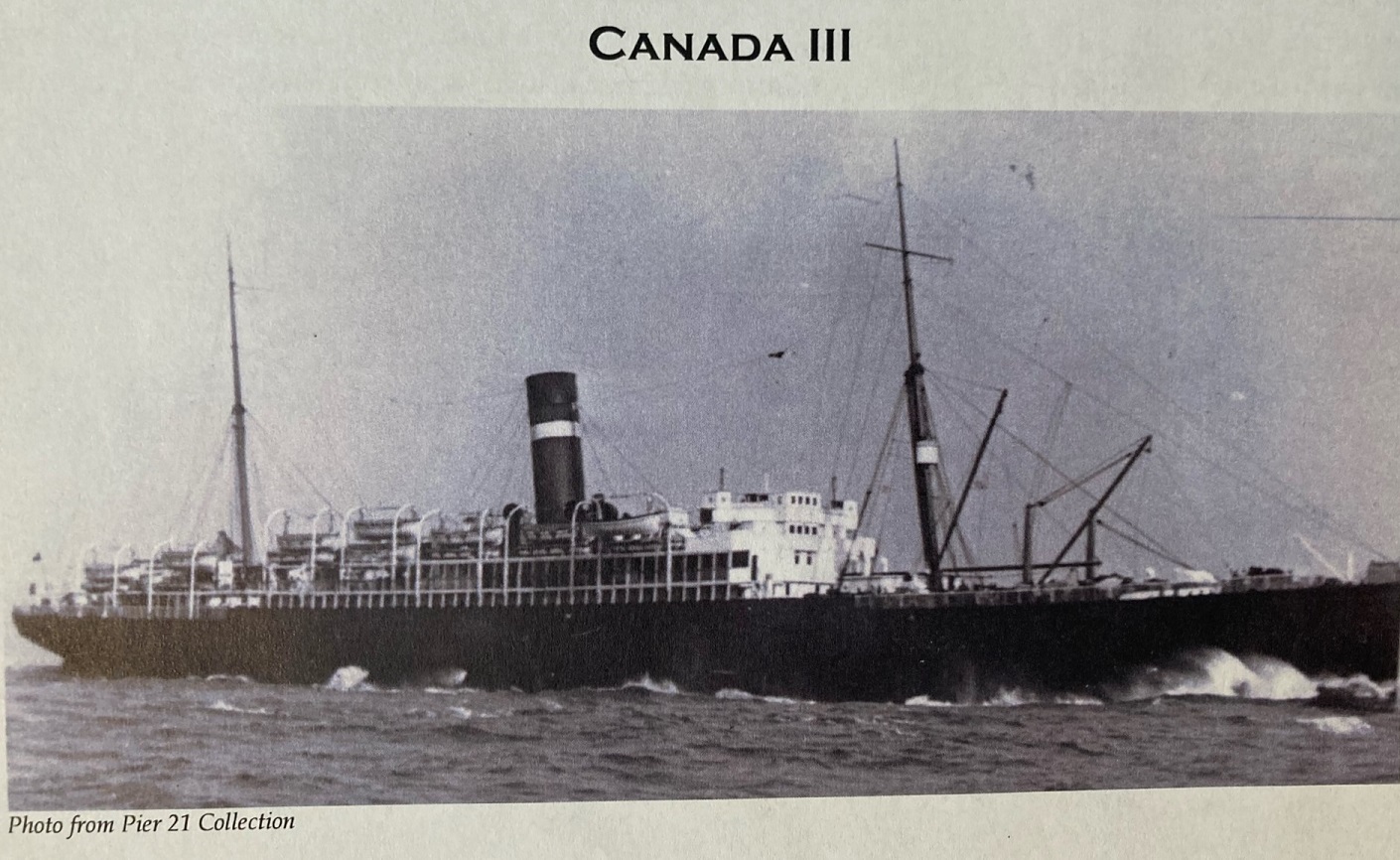 Learn about Canada’s immigrant history at The Canadian Museum of Immigration at Pier 21, one of the must-see Halifax museums and sights. Beautiful exhibits, first-person accounts, photos, artifacts, and interpretive displays detail the experiences of the nearly one million immigrants who made their way to Canada between 1928 and 1971. Indeed, one in five Canadians is related to someone who was processed here. And the museum’s Scotiabank Family History Centre lets you journey into your own family history.

The opportunity for visitors to map their own family tree is perhaps the most fascinating part of this museum. Before my visit, I sent the archival research staff information on my family’s immigration history. And upon arrival, I received a portfolio that included passenger manifestos and photos of the vessels that brought my great grandfather and my grandmother to Canada.

Lockhart Ross, aged 19, sailed on the Corean of the Allen line from Glasgow to Montreal, arriving in 1888. My grandmother, Hilda Williams, at age 7, sailed from Liverpool on a Dominion Shipping Line vessel Canada III, arriving in Halifax on June 5, 1903. I have framed photos of both ships on my office wall as beautiful reminders.

The Maritime Museum of the Atlantic 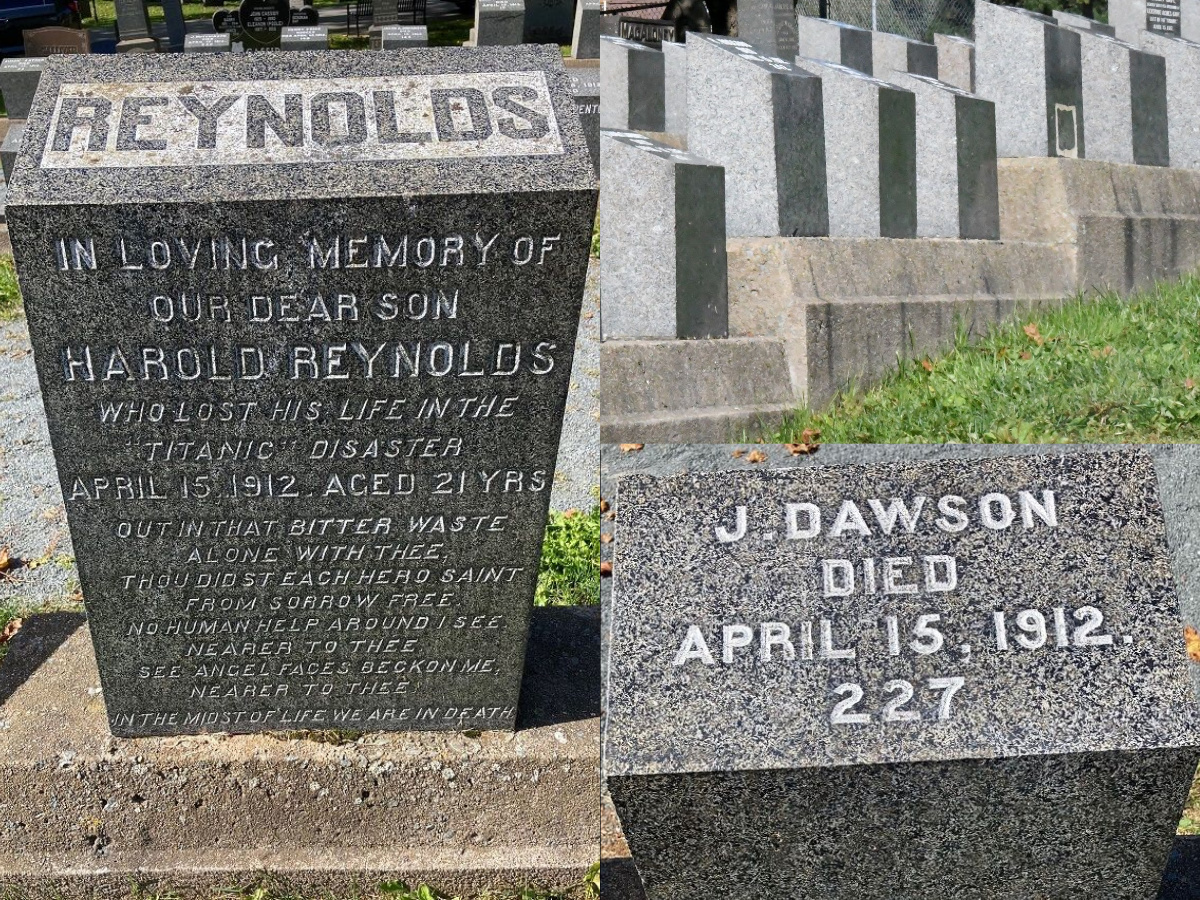 The Maritime Museum of the Atlantic, located on the Halifax waterfront, owns what’s considered the world’s finest collection of artifacts from the Titanic. Halifax was the closest major port to the 1912 sinking. Therefore it was where the recovered bodies were brought along with many pieces of wreckage. These fragments, including a near perfectly preserved deckchair and large pieces of oak carving, are featured as part of the museum’s permanent collection.

The Titanic exhibit will strike a chord with many, especially hearing the many sorrowful personal stories. Equally fascinating is learning about what life was like aboard the ship, especially what it was like to be an immigrant in third class.

To make this museum visit even more poignant, after taking in all the displays, visit the Titanic Grave Site at Fairview Lawn Cemetery, where 121 victims are buried. Be sure to walk down the rows and read the headstones sharing the stories of how these people met their end. 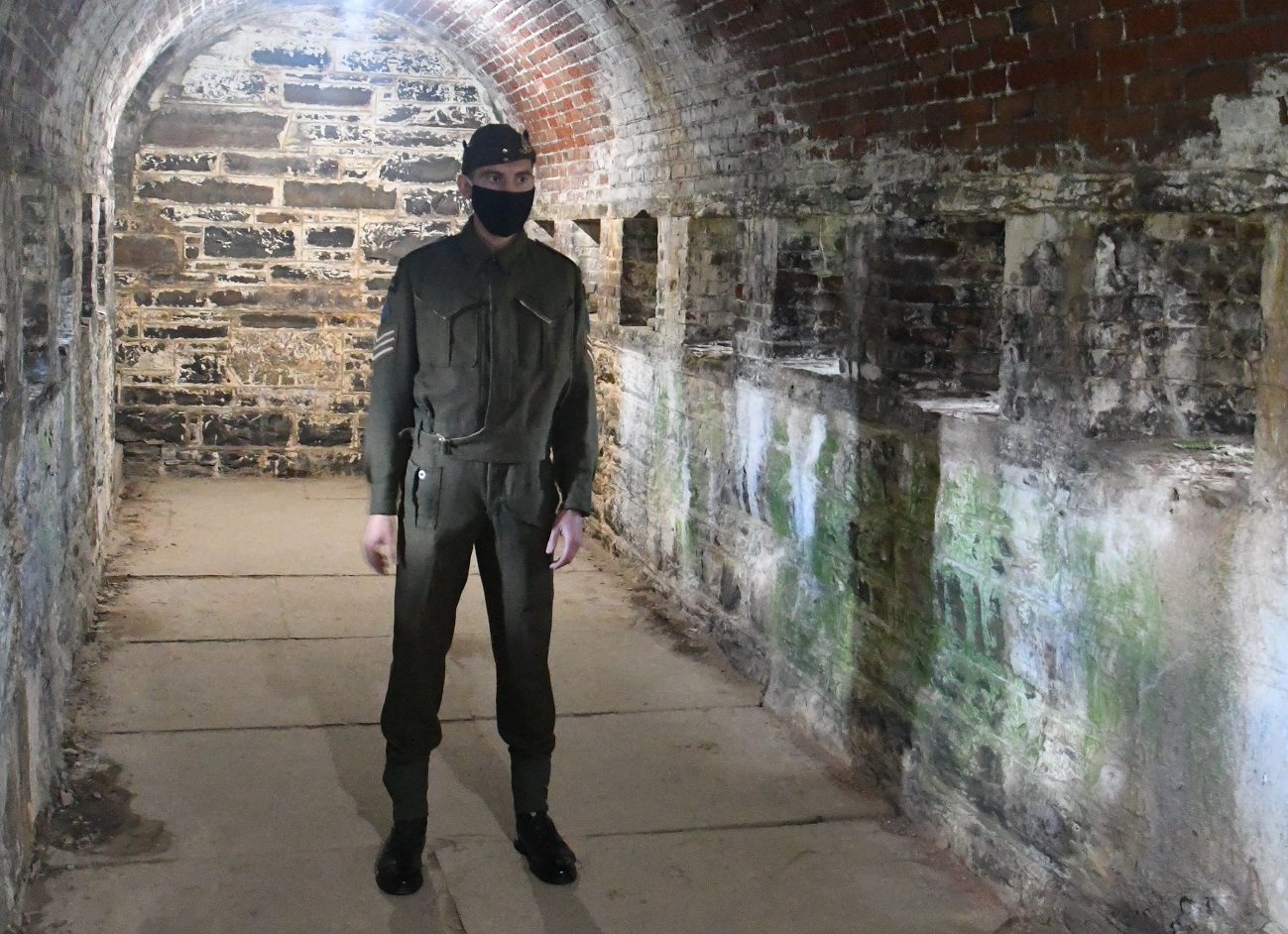 Take a guided tour of the maze of brick tunnels built underground on St. George’s Island, another of the must-see Halifax museums and sights,

Georges Island National Historic Site, a place the native Mi’kmaq called home for thousands of years, sits in the middle of Halifax Harbour. The island, one of five sites that make up the Halifax Defence Complex, comprises forts and batteries constructed to protect the city from attack. Although construction of Fort Charlotte began in the late 18th century, most of the island’s current structures date from the second half of the 19th century.

To learn why this little island’s fortifications have a large reputation, access it via a 15-minute boat shuttle from the Halifax waterfront. Georges Island played a role in the development of Nova Scotia and in Canada’s defense. And the fortifications served as a prison and an internment camp for Acadians. Then, for the best experience, join a guided tour of the maze of brick tunnels built beneath Fort Charlotte. Although the labyrinth of passageways is a bit spooky, you will find no spirits here.

Step back into history at Grand-Pré 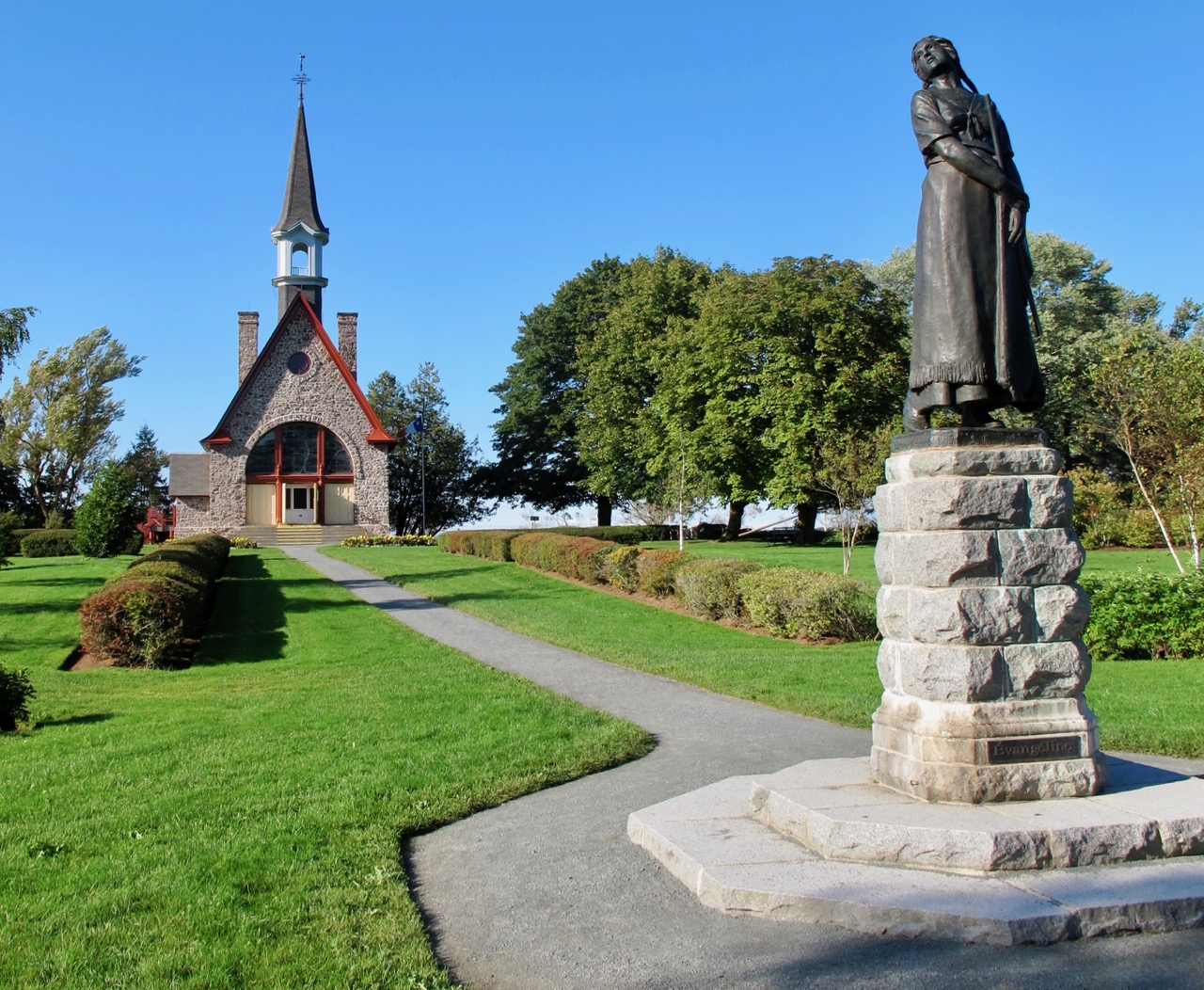 Just an hour’s drive north from Halifax has you at the Grand-Pré National Historic Site, one of six UNESCO Heritage Sites in Nova Scotia. The site and interpretive centre commemorate the Grand-Pré area as a centre of Acadian French settlement from 1682 to 1755. And it highlights the deportation of the Acadians from 1755 until 1762.

The innovative Acadian settlers established unique fishing and farming methods to survive. They lived in a semi-autonomous existence until trade with their English-speaking neighbours became more critical than their French loyalties. In 1755, when the Seven Years War between Britain and France started, the British government demanded an oath of allegiance from the Acadians to the crown. But the Acadians refused. Although a few escaped, most were brutally deported.

Meet Albert at the Lobster Pound at Hall’s Harbour 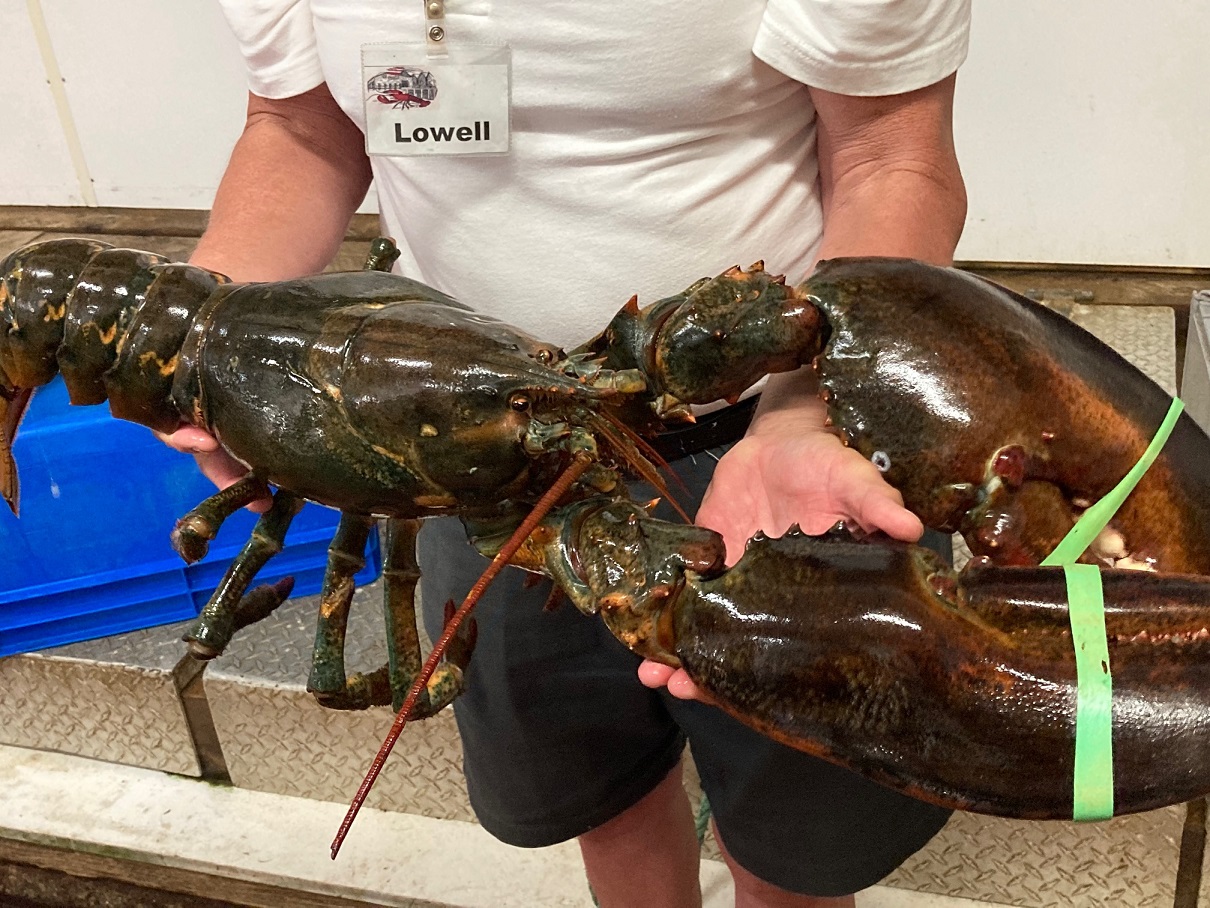 Now THAT’s a lobster! Hall’s Harbour features the “Lobster in the Rough” dining experience starring Albert the 77-year-old crustacean, making it a favorite of my Halifax museums and sights

For an authentic Nova Scotian experience, take a short drive from Grand-Pré to the charming hamlet of Hall’s Harbour for a traditional lobster supper at the Lobster Pound. The “Lobster in the Rough” dining experience has you picking your lobster from the tank to be prepared at the on-site cook shack.

While awaiting your feast, local resident and long-time lobster lover Lowell Simpson will introduce you to the unique lobster. As part of the experience, he will show you the working lobster pound processing facility. And, he’ll highlight how the lobster goes from boat to plate, no matter the destination around the world.

You will also meet Albert, a 17-pound, 77-year-old lobster. Of course, you will not eat Albert, but you will get your claws into the freshest lobster you have ever had. And you will enjoy your feast in the waterfront dining room overlooking the Bay of Fundy while observing the highest tides in the world. The wharf is high and dry at low tide, and the fishing boats rest patiently on the harbor bottom. But the water rises as much as an inch a minute to the 40-foot high-tide mark.

Be charmed by Peggy’s Cove 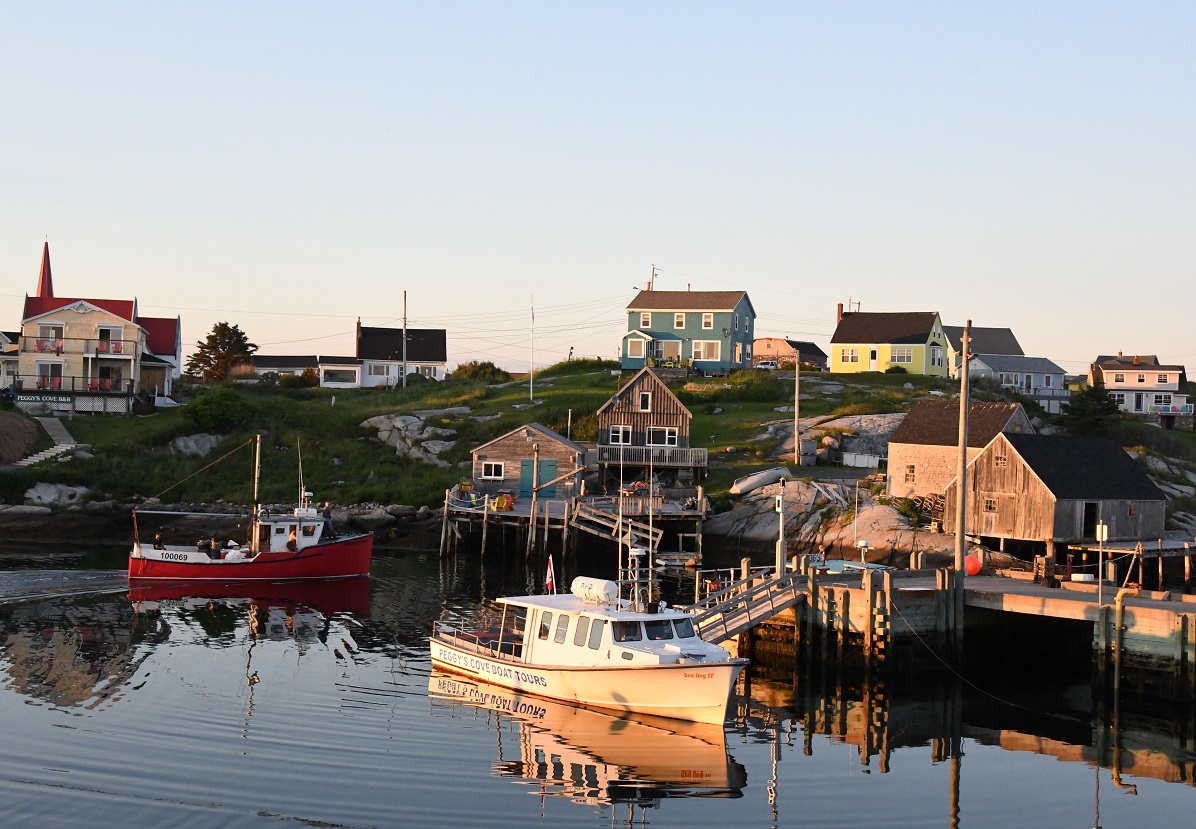 No visit to Nova Scotia is complete without making the short 50-minute drive from Halifax to Peggy’s Cove. The authentic fishing village is a masterpiece of delightful fish sheds, stacked lobster traps, and colourful fishing boats. A handsome lighthouse high on the rugged, wave-worn granite shore guards tiny harbour. So it should not be a surprise that Peggy’s Cove is one of Canada’s most photographed places.

Disclosure: The author’s trip was subsidized by Tourism Nova Scotia and Parks Canada 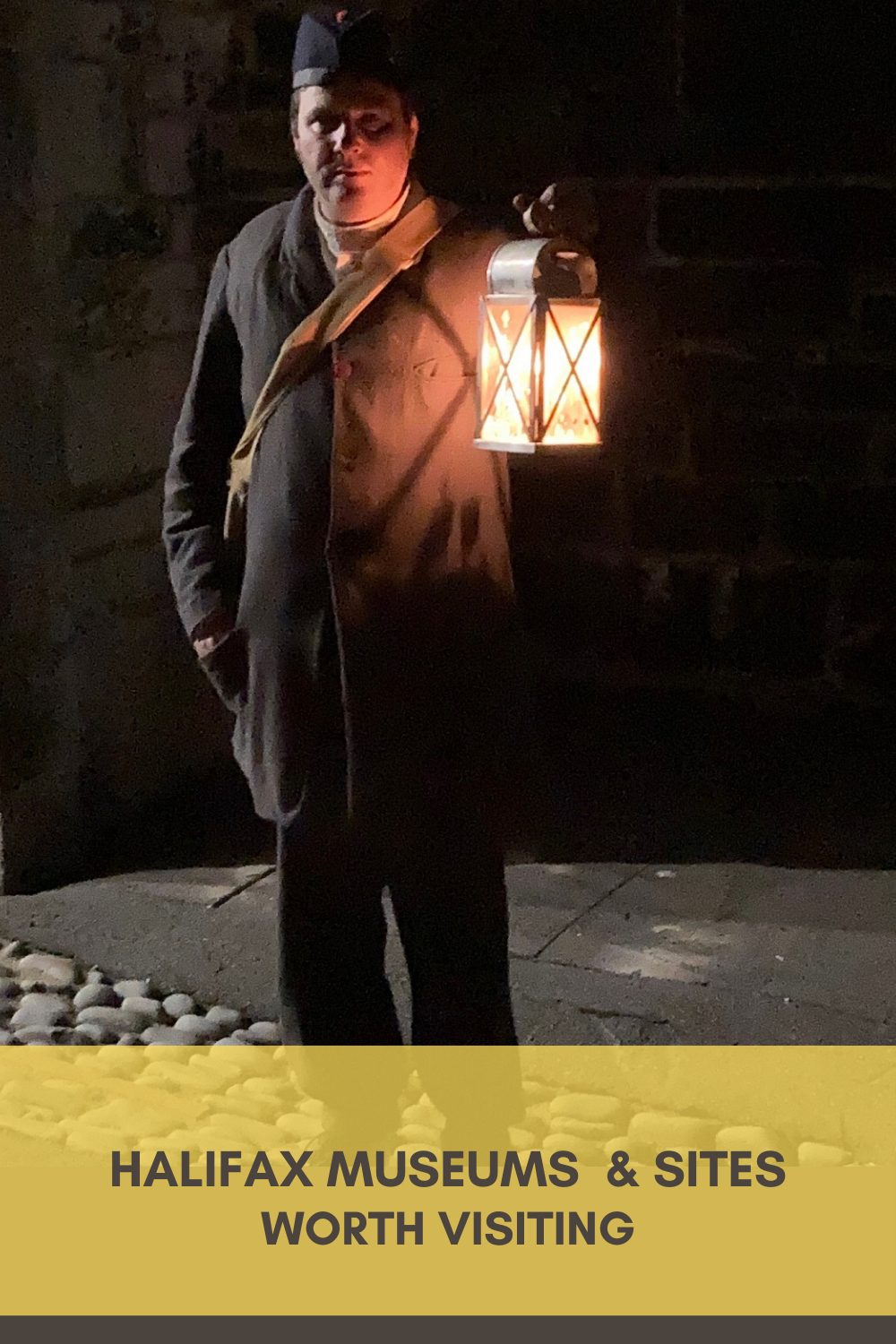